Today is our last day here in Hurghada at the Red Sea. To leave me a good souvenir of our journey, this night my bed broke in the middle and I found myself surrounded by bedshits sitting on the floor. I switched on the light and in the first moment got very furious. Years ago I would have alerted the whole Hotel, manager included and pulled him personally out of his unbroken bed, made a mess and fuss with everybody until I got a new bed immediately. . But with the years I became more philosophic and I didn't want to wake up Chantal who was sleeping peacefully in her room.

I decided to pull down the matrass on the floor, switched off the light and slept like a baby, except that with the light a moskito had moved in, which showed its love for me by singing around my head. I tried to kill it but apparently I am not a talented killer, it didn't work. Fortunately I had put a creme on so it couldn't do its vampire job.

In the morning I went to the reception at 8 am and told my story. He said he will sent somebody immediately to repair the bed, I had my doubts about repairing, but I didn't object. At 11, the somebody hadn't shown up yet. I called the reception and asked what he meant by immediately because it was 3 h later.
He excused himself and said he will sent somebody right away. At noon still no "somebody". Outside our flat I saw an employee called him and showed him the disaster. He scratched his head, then kneeled down put the bed together and hammered with his fists. The bed didn't want to be repaired and broke again.
I suggested a hammer.. He nodded and took the bed with him, demolishing nearly the door. That's a good idea I thought I will get a new bed. 5 min later another showed up with a hammer and looked around for the bed. I told him the bed was taken away by his friend (all are friends here), he nodded went to the bedroom with the hammer and looked at Chantal's bed. I feared the worst ! At this moment the first one came back with a "new" bed, and now I had what I wanted : a bed and a hammer ! The man with the hammer disappeared and the other put the bed together and I hope it won't break down again under my elephantic weight. I think I need a diet I broke already a chair here ! (see wordless Wednesday)

Little recompensations in the evening for my damaged soul
Posted by Gattina at 06:00 12 comments:

SHOW & TELL - Bouquets out of Vegetables

More participants here
As I am still in Egypt, I thought I show and tell you about some very special art, I saw here in nearly all big Hotel Restaurants.
Flower bouquets made out of vegetables only !

some of the ingredients

he carves and sculptures flowers and birds

the birds are made from big carottes

and here is the result of all that work. Isn't it beautiful ? 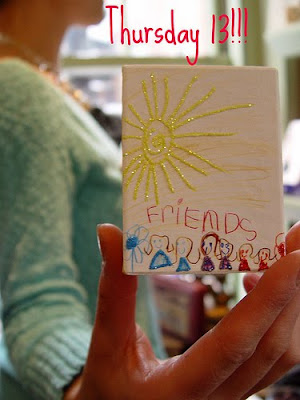 
13 surprising things happening in our hotel

Our Hotel unfortunately had made a contract with a Russian travel agency, not thinking that these people couldn't leave their country for decades and have no education at all. Of course not all of them but certainly 80 %. They had to line up to get the simplest things and also had not much to eat. That's why they think when they payed for "all inclusive" all is inclusive.
Hurghada is a very cheap tourist place for sea, sun and good food we only payed 950 € for 2 weeks, flight and half board included. That's why Russia discovered Egypt because it is affordable. Yesterday I met two Canadian couples, and we have a little group of friends from Germany, Sweden and Finland too.

1. At the beginning we wondered that there were no coffee spoons until we were informed that the Russian tourists took them with them to furnish their home in Russia.

3. They permanently run out of dishes, they are stolen and the Hotel can't follow with ordering new once

4. Napkins are a seldom luxury because the once in fabric disappear immediately and packets of paper napkins are taken away for other purposes

5.. If you don't arrive early in the restaurant, you will never find a knife, fork or spoon. They land misteriously in some pockets.

6. You will find twice salt in the holder or twice pepper but seldom pepper and salt. It must be the same for them

7. Glases have various forms. Or they are so big that they look like a bucket or so small like a mustard glass

8. Tea bags you only get on request, because when they were laying on the table they disappeared too. They probably think that as they payed for "All inclusive" they can take them home.

9. Be careful when you line up at the buffet, because they overrun you and push you aside to shuffle food on their plates. It doesn't matter what it is, fish, chicken, meat spaghettis, potatoes rice all together on one plate.

10. Beach beds can brake down under you due to the weight of a big Russian guy who used it before

11. Toilet paper, is something rare and only available on request. I don't know what they do with it

12. As they are not used to a toilet with a water container and flush, they pulled the whole cover out and broke it in the entrance hall restrooms.

13. Of course I first complained about this leak of service in a 4 * hotel, but when I heard that they can't buy quickly enough new plates and cuttlery because they disappear permanently , or repair broken things, I rather pittied them and laughed and told them that at least it's not boring here.


and last but not least sunshine warm weather, palm trees and the blue sea ! 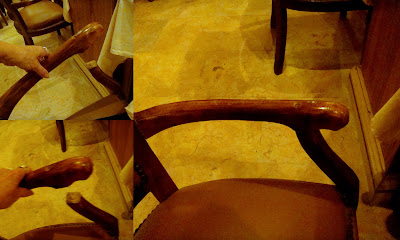 This happened to me when I wanted to sit down. Suddenly I had the arm of the chair in my hands ! We bursted out in laughter because each day we discover some new "catastrophies"..
Posted by Gattina at 05:51 14 comments:

For another week my world is in Hurghada at the red Sea in Egypt. As it is very hot during the day, we do our window shopping tour in the evening.

The Egyptians are very cheerful people and like to laugh and make fun all the time. Here I just wanted to take a picture of the shop, but they wanted to be on it. In Morocco they almost spit in your face if you take a picture of people, because they pretend that taking a photo takes her soul away, but curiously if you give some money the soul stays inside. They say it is written in the Koran. I dared to remark that at Mohamed's or Jesus time there were no cameras yet.

A view on Hurghada's beaches

A friendly Egyptian couple enjoyed the sea too. I found her outfit very elegant and she swam like a fish !

Each evening we had the pleasure to be smoked like sausages, because of the moskitos. It smelled horrible but it was efficient !

The water was very warm and so salty that you didn't need to swim, it carried you just like that. Besides the red cap Chantal is swimming.

There is also a diving center in the Hotel, but we never saw the divers because they left early morning and came back late night.

The beach camel was not the same as last year, this is Ali Baba, the one of last year was Oscar.

The appetite of the Russians hasn't changed, they eat whatever they can get. You really see that they suffered from privation over decades. Most of them haven't even seen an orange in their life. Unfortunately they behave like savages. Hotels now start to refuse Russian groups because they damage too much.
Posted by Gattina at 06:00 16 comments:

What is the oldest possession in your house or flat? Describe it or show us a picture. Where did it come from? Why do you hang on to it?

I have to change a little this challenge, as for the moment my home is in an appartment in a hotel, in Egypt at the red sea. I tried to find some old or even very old things, but unfortunately I haven't taken pictures of our flat yet. There are certainly some old things like our sofa which has to be newly covered, so they had taken the matress out and we can't use it, but we have 2 beautiful new armchairs. There are also some damaged furniture which look from pharaons times, the fault is not the Hotel, but the Russian tourists who broke everything and housed in there like wild people in a cavern.

Now the Hotel refuses most of them, because they had broken and stolen so many things like toilet covers, towel hangers, faucets, cuttlery, plates, cups not to talk about beach towels. One russian "lady" had taken only 20 towels to take them home. They probably think because they have"All included" the furniture is included too. Their country is still very poor for most of them and things which are so normal to us are still hard to get.
But the staff of the hotel is so adorable and friendly they help wherever they can, so that quite a lot of people come here every year and some retired once even 3 or 4 times.

So here are some photos

The Diving club is old but so colorful, maybe not the modernest one, but divers like it.

and old advertisement which I found so cute

and here is our new sofa just being covered. It will be beautiful I am sure.
Posted by Gattina at 06:00 15 comments: