This year we went to Amsterdam (Netherlands) to celebrate Christmas there together with my son. I had seen Amsterdam in spring, summer and automn but never during Christmas time and I was quite disappointed.

The official Christmas tree in the Center was very poorly decorated and there was nothing else around. Finally I saw a little bit in the western area of Amsterdam. We made a walk through this area and I took some pictures.

The private houses had no decoration at all not even in the windows. I saw maybe two. The so decorative house boats were not decorated either I only saw one. I also was told that not all families do a Christmas tree and this too only starts. Christmas trees apparently were only put up by catholic families in the past.

My conclusion was, it is really not a city to visit around Christmas and get into Christmas mood ! 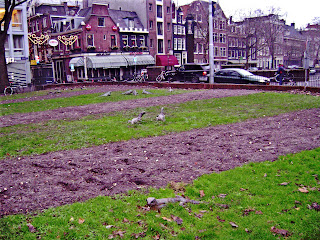 There is almost no decoration at these houses. The place in front was covered with little metal sculptures of reptiles 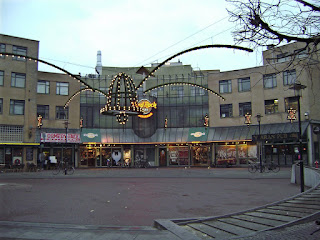 The Hard Rock Café had some decoration ! 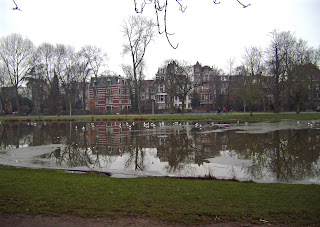 and around the Vondel park which is the biggest park in Amsterdam there was again nothing. 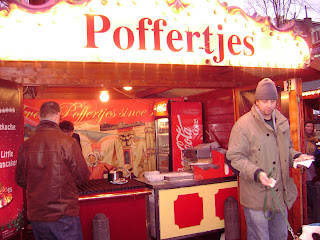 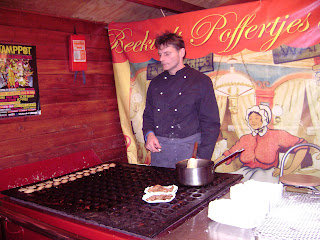 On a little place we finally found something christmaslike and I bought a portion of Poffertjes.These are mini pancakes which are baked on this special griddle. It is served with powder sugar and tastes delicious.

This time I didn't want to see more of Amsterdam, it was too depressing ! Fortunately at our son's appartment it was really Christmas !

We use to celebrate Christmas on Christmas Eve and start with an apertitif while unwrapping our Christmas gifts. Then we have a nice meal. 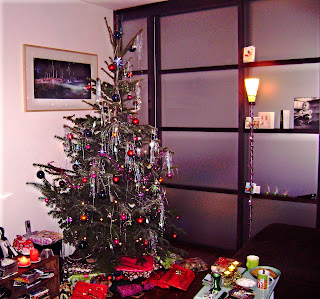 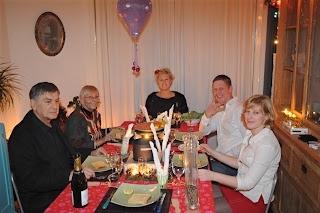 A nicely decorated table, our son even ironed the Christmas table cloth and I found it funny because I never iron anything and my table cloth is iron free ! Here we are with a couple of their friends and our son's girl friend sitting in front of Mr. Gattino. 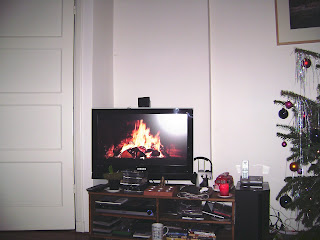 An open fire in the Television 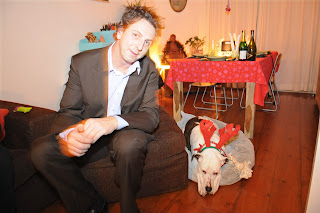 Jersey the dog who belongs to a collegue, is spending Christmas holidays with our son. 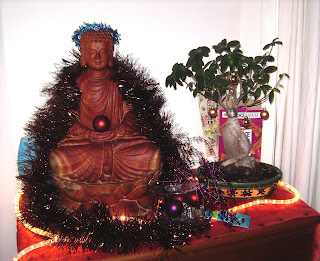 and even the big Buddah he bought in Vietnam was in a christmassy dress.
Posted by Gattina at 06:34