1. I get the impression that for the moment I just could copy and paste the FFF from the previous weeks !

It's still cold, the white snow melted, only in our street it still looks like winter sports, except the street which is dirty. After aqua gym I watched a bit "Escape to the Country" the old once on YouTube, the houses are probably sold but the landscapes are still so pretty.

2. I had bought a movement detector, I mean a lamp which lights up as soon as there is a movement, and had glued it against the door. Unfortunately the thing fell down and I had to buy a special glue. Meanwhile it looks like this 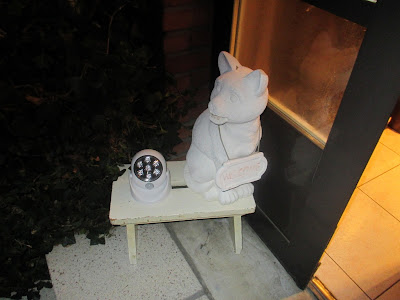 because I can't glue it now it is too cold outside.

3. Now that the end of the official "Sales" period comes close, there are "sales" on "sales", which means that the things are even more cheaper. I had seen a nice cardigan and thought maybe the price has dropped too now and yes, instead of 20 % it was now reduced to 50 % and of course I bought it. 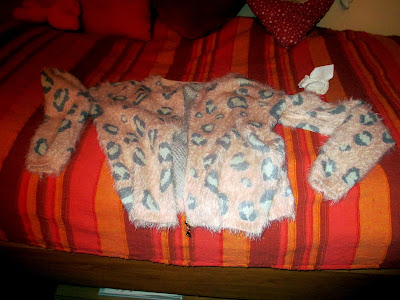 It is again out of mohair like material which is so soft and warm.

4. Not to always look at the same walls I went to Ilona who also was in the same case as me. She had caught a gastric flu virus and had just recovered. We had tea together and chatted the whole afternoon then I returned home it snowed a bit, but it didn't last.

5. We had again a birthday to celebrate in our painting class and the cakes were delicious. I even forgot to take a picture. I also finished my painting, it was about time, and forgot also to take a photo ! 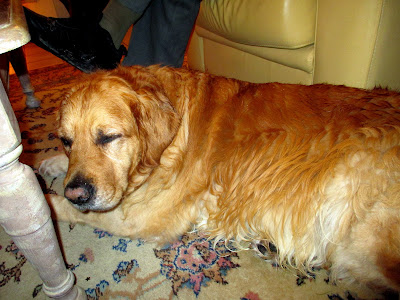 Nicole and I went to the Lunch Garden at Carrefour, before we picked up Charlie who loves to come with us. When he is with us we speak to so many people, Charlie is a real celebrity he just lays there and doesn't move, only his tail from time to time when people smile at him. We had cod with spinach leaves in a white sauce which was delicious. A nice desert and a coffee finished our meal.

VINTAGE WOMAN AND A SMART PHONE

I had lunch with one of my friends. We just had taken the card to look at the menu, when her mobile rang. She fumbled in her handbag and got more and more angry because her bag was also a little portable shop. She carried everything in there from tissues to mobile, which now had stopped ringing.

She pushed a deep sigh and told me that she had never wanted a mobile because at least when she is out of the house she doesn't want to be persecuted by her family. She is the director, manager, administrator, and cleaning woman of a big family.

Now her daughter had offered her a new mobile and this gift poisoned her life. The one she had before was a mobile to call and receive phone calls and that was it.

The one she has got now does almost everything and has even a telephone function. But it is hard to find the right button. At least that's what she told me.

She pushed again a loud sigh pulled out of her warehouse bag a manual and her glasses put them on her nose and started to read what her mobile could do.

Sharing photos, video clips and captured memories with family and friends on a large compatible TV screen. For that she said, we have a digital camera and a DVD recorder. Which unfortunately she doesn't know how to use, because husband and children take care of that.

Internet access for browsing, uploading content, and sending and receiving emails. What should I do with that ? she asked me, I never even touched a computer, only for dusting !

Browse the Web, watch TV, listen to stereo FM radio and a digital music player and can also easily rip CDs and transfer music collection to the phone. And in addition, she could store up to 1500 songs !

I whistled (inside only) impressed. I imagined watching a football (soccer) game on my mobile and would probably see a bunch of flees running behind a point. She gave me a desperate look, and asked me :

What is browse, internet, web, email and what for a content could she upload and where ? Not to speak about 1500 songs she would never have time to listen to all and why 1500 with 6 she would already have enough !

I thought of my other friends when I had tried to explain something so simple as my blog and that it would probably take a year or even more or maybe for ever to explain it to her and suggested to ask her daughter who had offered her this generous gift.

The only thing she complained, I would like to do with my mobile is to call my friends and open my garage door so I don't need to get out of the car ! That would be so nice especially when it rains. But this thing cannot even do that ! 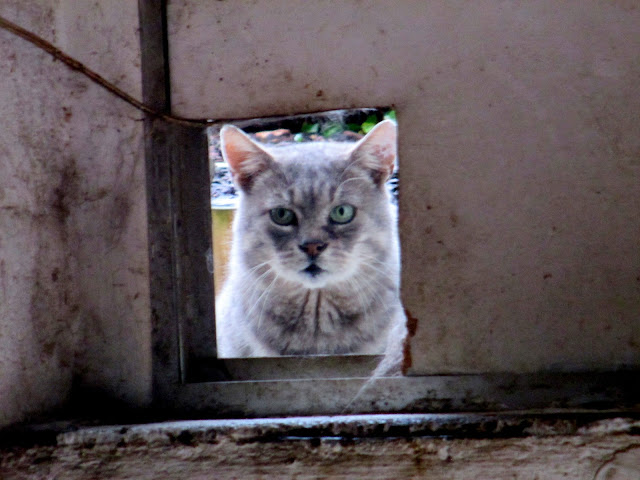 The intruder
Posted by Gattina at 06:30 7 comments:


After a long rather warm winter, we had our first snow and the temperatures dropped below 0°C.
Snow is not my favorite weather, but when the sun is shining and the snow sparkles in the sunshine it can be very beautiful.

On my way back from aqua gym I took some pictures 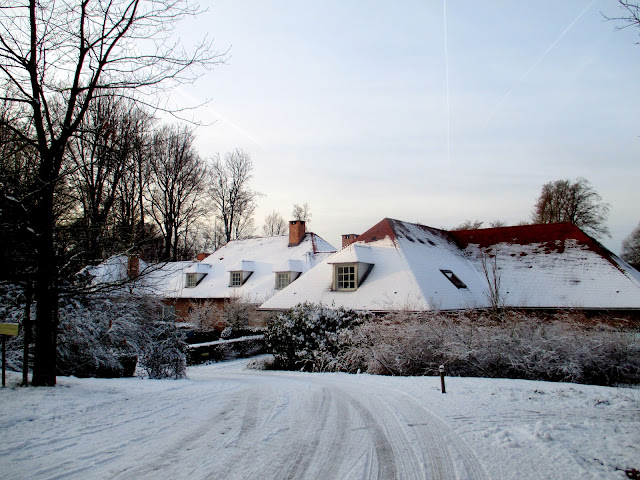 It was very difficult to drive because the little streets had remained untouched and not cleaned. 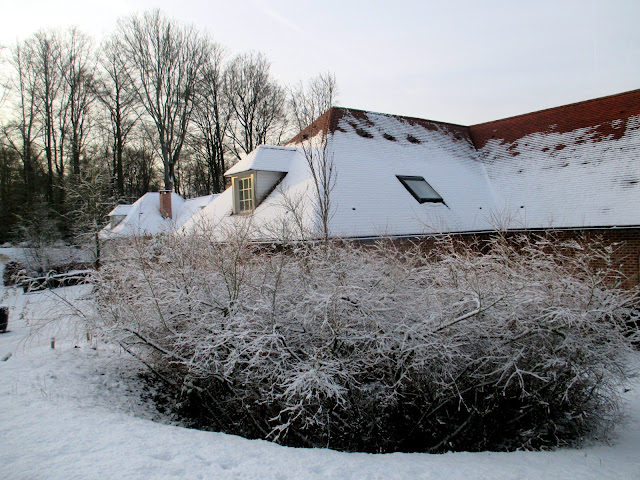 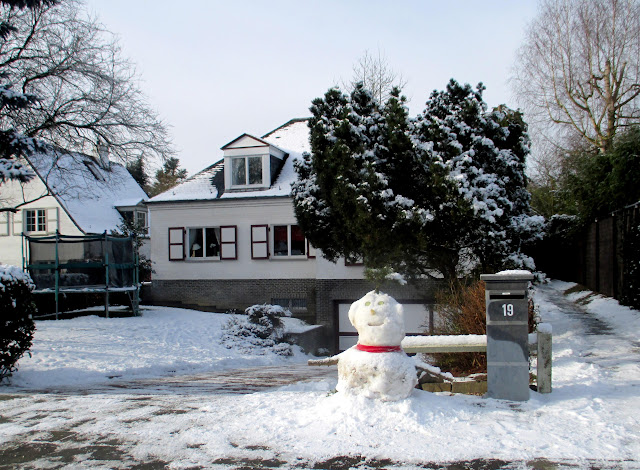 Some children had built this nice snowman ! 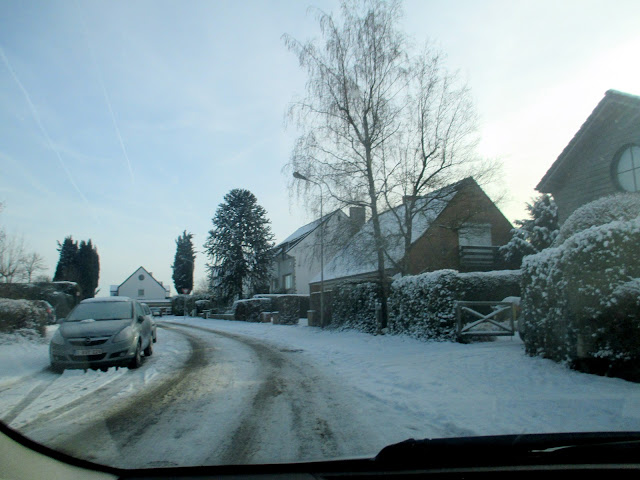 Our street started to look a little dirty and was very slippery. 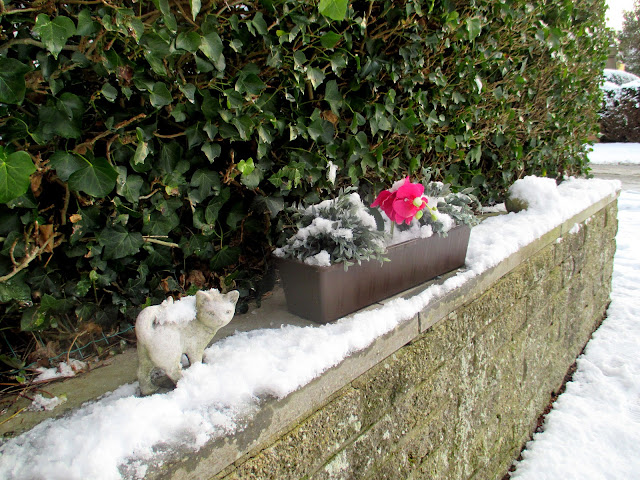 The little cat figure on our wall wore a coat and the fake flowers gave a nice contrast to the white snow.

For the first time this year it has snowed ! 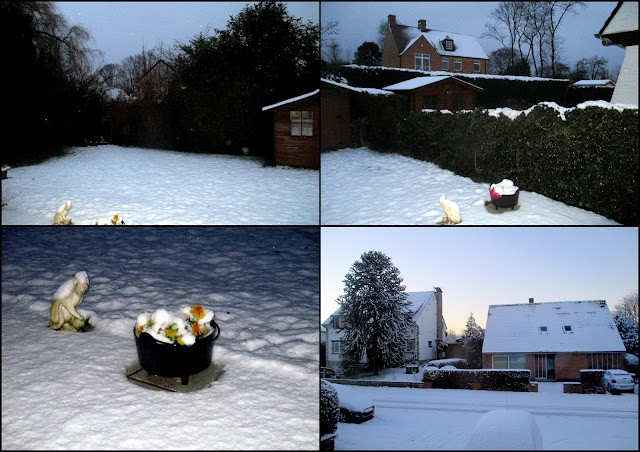 When I opened the shutters, the world was white ! This view is rather romantic, but in town it's a dirty mess ! The salt they had spread had melted the snow and the borders of the streets had a hill of dirty snow, not to speak about the sidewalks !

As usual the whole traffic broke down, highways hadn't been cleaned in time (although snow was announced) and it took people until 4 h for 20 km to Brussels. 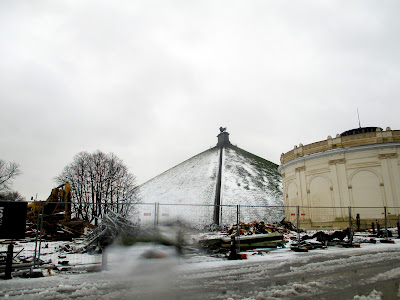 I wanted to buy a new headphone and as the store was close to the Lion I took a picture of the mount in the snow. It even looks more sad ! There was not a single person, because the restaurants and cafés are not there anymore. 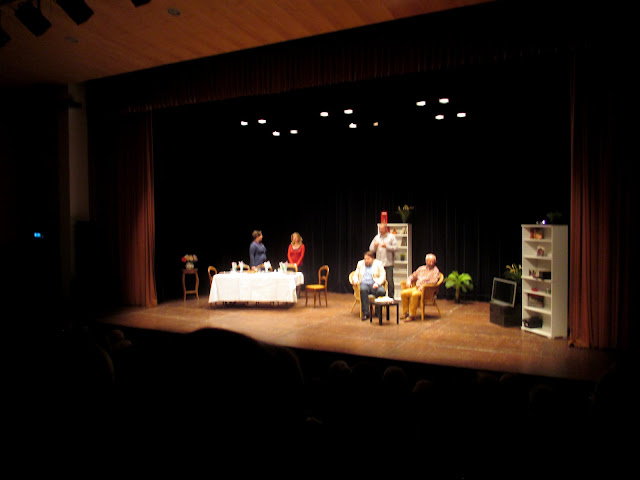 We had our theatre piece organized by the Waterloo city for seniors and it was absolutely hilarious. We really had a lot of fun. When we came out it started to snow again and instead of having a drink in our Pub "La Pomme" we returned home because it became too slippery.
Posted by Gattina at 06:30 7 comments: