1. On Monday was my first day home and it was hot ! So hot that I left my suitcase as it was and started to sort out my holiday pictures. That took me quite some time and I decided to move on our terrace under the Pergola and continue there. Then I suddenly realized that I should take out something of the freezer for supper ! Even that was too much, but I managed. It was an Italian pasta salad, with salmon and mozzarella, unfortunately Mr. G. who always warms up the supper in the Microwave only saw pasta and warmed up the salad. Useless to say that it had a rather strange taste, the mozzarella had melted and the little tomatoes were cooked ! I told him to take a closer look next time and put on his glasses and not warm up everything which is always at the same place in a bowl just like a robot. I considered for a moment to put my slippers there instead just to see if he would warm them up too. But I didn't.

2. The next day it was cold ! Half of the temperature we had the day before. No excuse anymore to unpack my suitcase and fill in the laundry basket. 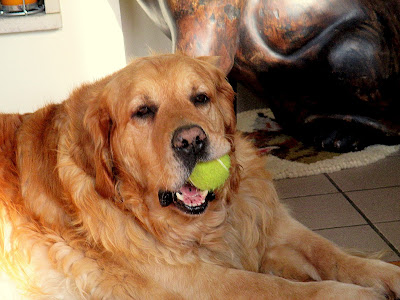 In the afternoon I went to Nicole where I was greeted by Charlie who was so happy to see me. Fortunately it had stopped raining and there was a little sunshine so we could sit outside and I reported about my holidays.

3.  There was still enough food for us in the freezer so I didn't have to go shopping, Mr. G. did it instead for fruits, cheese and ham and cat food of course which is the most important thing in his eyes. And it was hot again ! 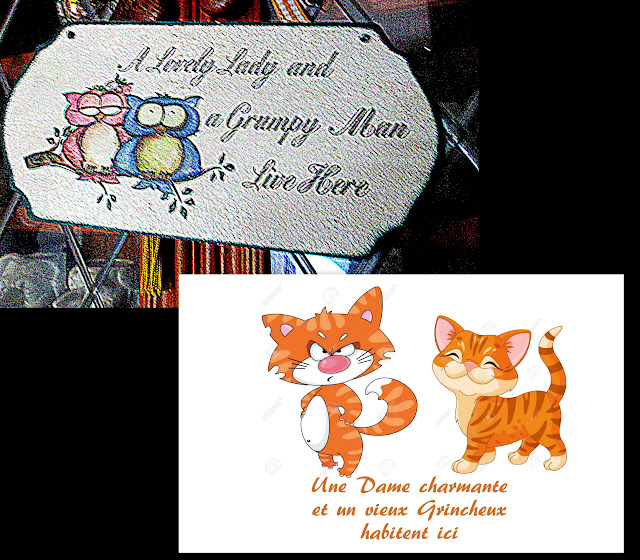 The only thing to do was not to move ! I had seen this sign in England at a friend's house and found it so nice that I tried to create the same but with cats and translated it into French. Here is the result. Now I have to find a frame and hang it up ! Mr. G. laughed and approved.

4. It became even more hot ! Late afternoon over the hedge,  I talked to Dominique my neighbor and we decided to go for a drink to the Waterloo Lion and do some Tourist watching.

It was a great idea, because there were lots of them ! Despite the heat they bravely climbed up the 226 steps !  We almost thought we would be in the UK ! Everybody around us spoke English and Dominique took the opportunity to dig out her English and exercise !

5. The week ended with another hot day and after having done some household scores early morning when it wasn't so hot yet, I moved outside into my summer office. 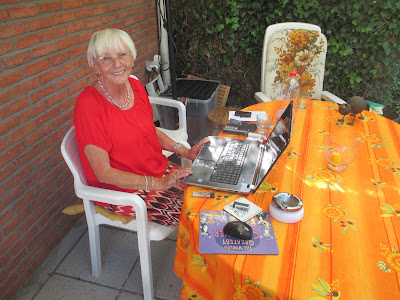 where I spent the rest of the whole day. Ilona came to visit me, because in her garden it was too hot. So we had a nice afternoon together.

more participants at Susanne at Living to tell the Story.
Posted by Gattina at 06:30 16 comments:

The very first time I put my feet on London soil, must have been in 1986. At that time Mr. G. attended English classes and at the year's end they organized an excursion to London. Unfortunately we both don't remember the only reminder of this journey is a photo from both of us at Westminster.

I really discovered London in 1996 when our son went to London to work with an English fashion photographer. I still remember when I and his (at the time) girlfriend's mother stood at the ferry in Calais and see them going with their backpack on the boat, leaving home forever. I had a very heavy heart, a new life started for him and also for us.

As soon as he had found a flat with the help of his boss rather quickly I visited him. His flat was in Sydenham Hill an affluent locality in South East London. It was a council flat which belonged to a lady who was abroad and had rented it to him which normally was not allowed. Anyway the flat had two rooms, bathroom and a kitchen. His girlfriend had made it to a very cozy place all freshly repainted and nicely decorated. I really felt home and went there as often as I could. There I really discovered London. First of course all the touristic sites and then over the years more and more. When they bought a house in South Norwood, we bought furniture together and made it to their home. Each time I was there I discovered more from London. While they were working I visited all corners of  London and loved it. 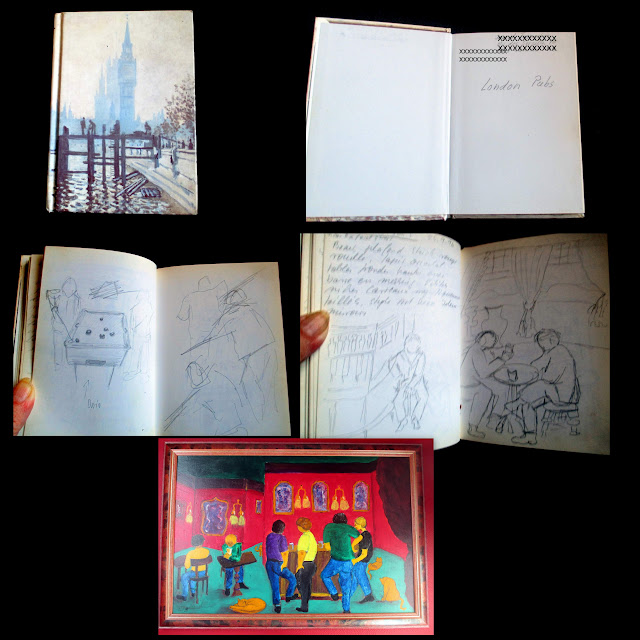 I loved to sit in a Pub and in my little sketch book I draw the people in the Pubs sitting in a corner. Nobody ever disturbed me. Some of them I later painted in acrylic.

I was there one week after Princess Diana died and saw the with flowers covered Kensington Park. There were so many flowers that I hardly saw the park. The same was in front of the Buckingham Palace it was very sad. When the garbage lorry wanted to shovel all the flowers away, people got so angry with their Queen, that they stopped the truck and didn't let them through. I thought I would be in a riot !

We also spent all Christmases in London and I could see the different decorations each year. Unfortunately my son had to go to Amsterdam for the company he worked for after the photographer and my visits to London stopped for almost 7 years. Only in 2008 I saw London again. I had stopped there on my way to Eastbourne at the English South East coast. I was lost ! London had changed so much nothing was the same anymore. Even the people on Oxford street.

Ever since each year I make a break in London and tried to find my favorite places where I loved to go. Meanwhile the whole dockland had disappeared and most of the old Dockland wharfs and warehouses have been demolished, some have been restored and converted into flats. Most of the docks themselves have survived and are now used as marinas or watersports centres. Although large ships can - and occasionally still do - visit the old docks, all of the commercial traffic has moved down-river. A huge to me strange looking building had shown up called "The Shard", I saw it but never went in. 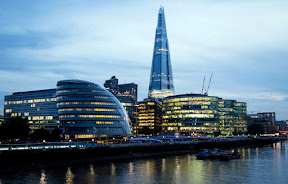 Each year there are other changes and works are going on everywhere in London. Sometimes I thought that London had become a big building plot. They work underground and streets are closed, new buildings show up each year. Trafalgar square has shrunk, no pigeons anymore to feed.

Despite all these changes I still love London and continue to go there whenever I can. 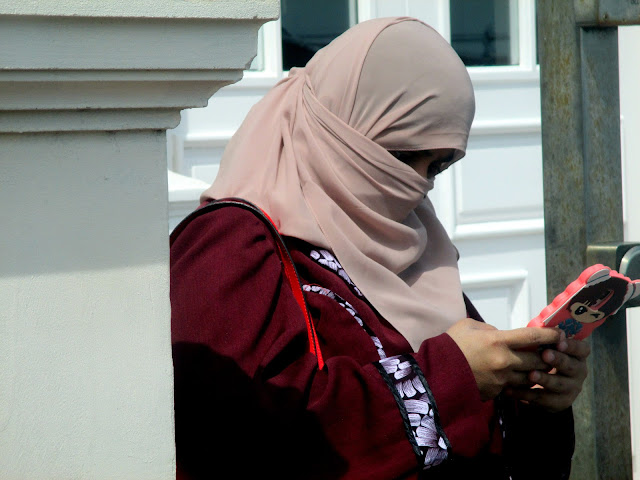 This is me, shopping uncombed, no makeup and having a rash in my face

Mons is a Belgian city and municipality, and the capital of the province of Hainaut in the French speaking part of Belgium.

It’s easy to forget that Mons was once a mining town, because it’s now more like Silicon Hill. Internet search giant Google has built a huge data center outside the town, creating a digital community among the abandoned pits. Read more here ......

My last two days I mostly spend at the seafront. 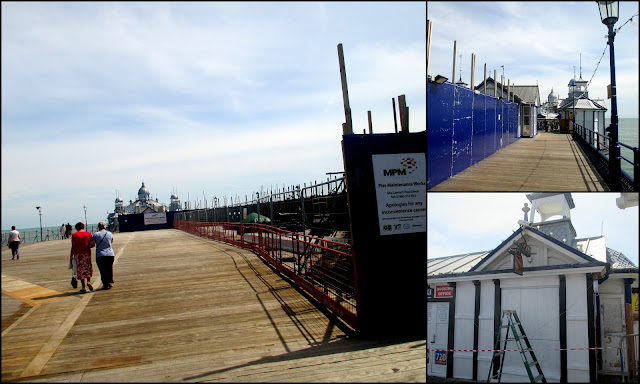 For the first time since the dome of the pier had burnt down I went on the pier. It looks strange to me who knew it for such a long time and now the whole middle is missing. It made me really sad.

But the views from the pier have remained unchanged, they are still gorgeous 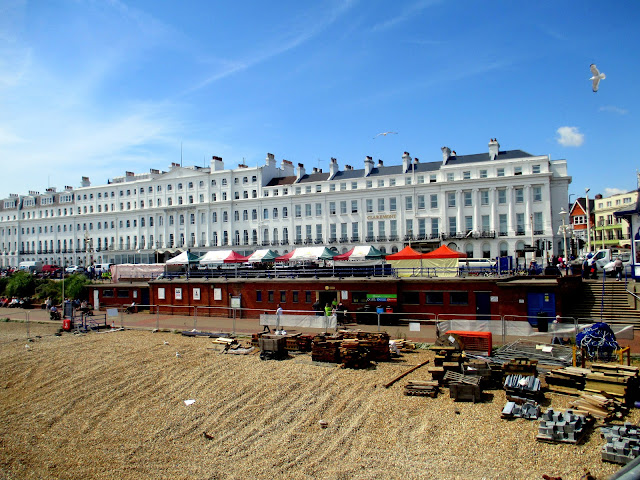 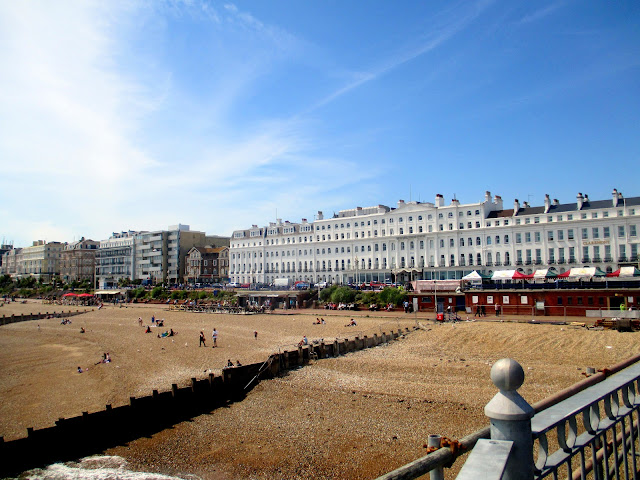 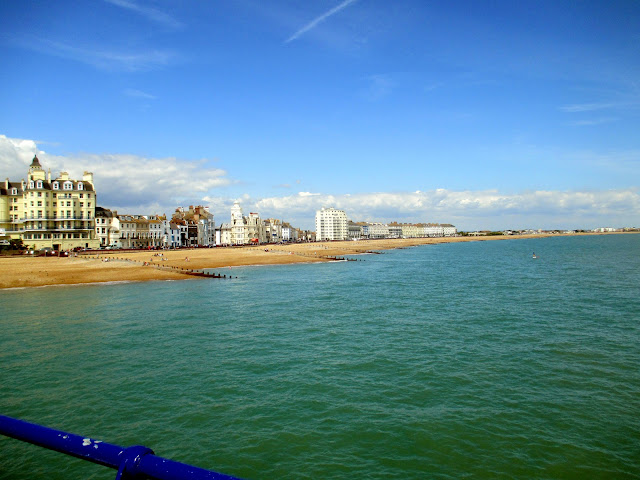 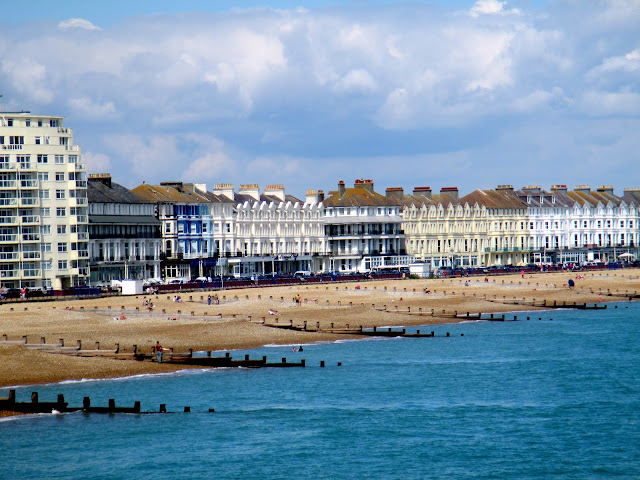 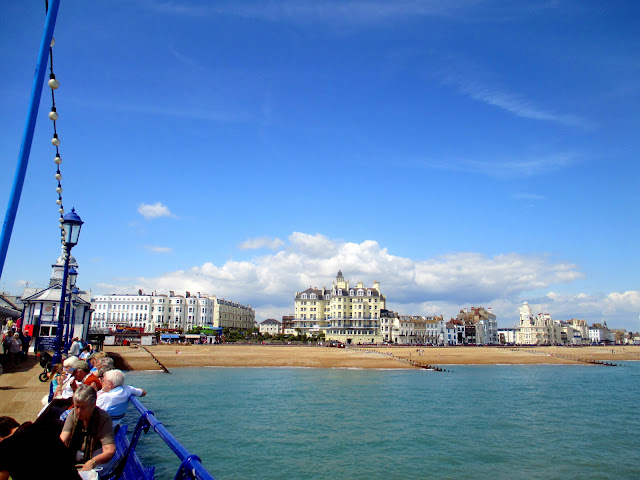 Nothing has changed at least from outside, although most of these big houses are now hotels, Bed & Breakfasts or holiday lets. 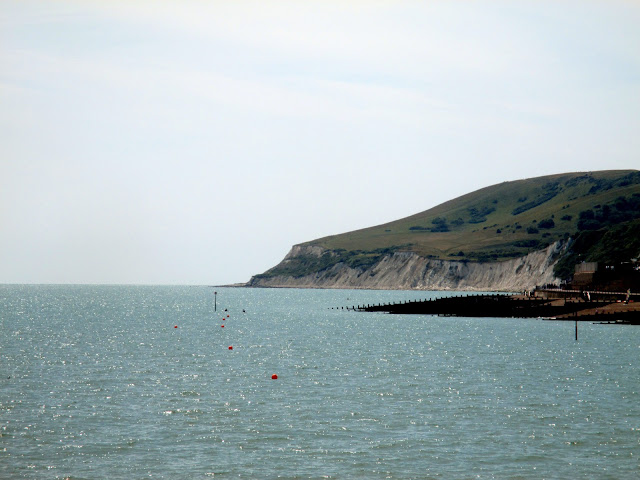 Only the cliffs are timeless 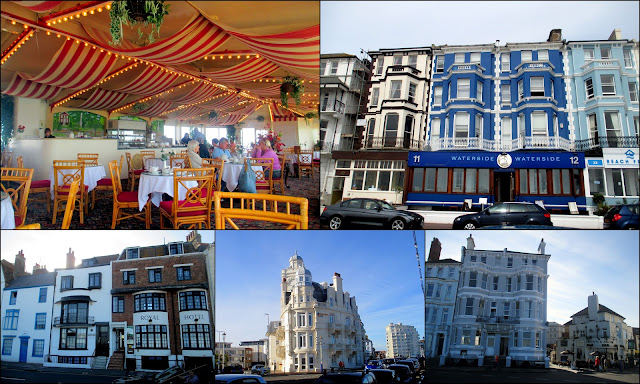 The Victorian Tearoom on the pier where I had a cream tea, had always been full, but this time it was almost empty. I have to say that the scone I got with the clotted cream must also have been  from Victorian times, so hard it  was.

For the last time I had lunch together with Doug and his neighbor an old friend. We were sitting outside in the garden and it was really nice.

It took me more time to get from Eastbourne to London than from London to Brussels ! At the St. Pancras International station, I met with Marie from "After 60-the next 10". It was so nice to see her again. As I was a not in the mood to visit London again, my legs were rather tired from all the walking along the Eastbourne beach, she had the very good idea to take me to Regent's Park. 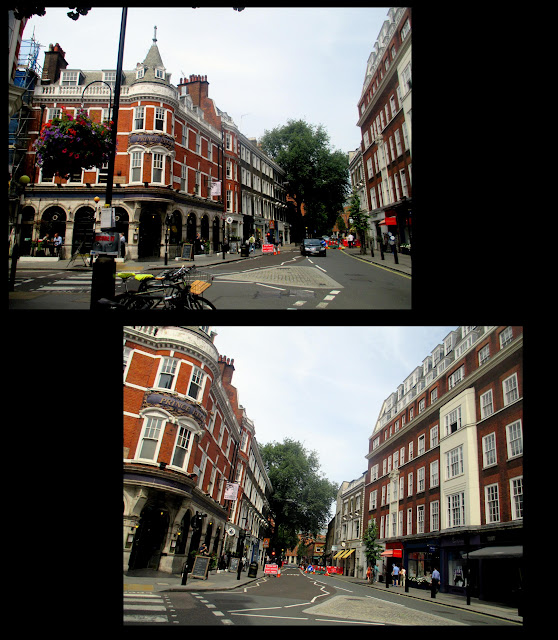 First we had lunch in a restaurant which was in a street I only had seen from the Bus but had never gone through. It was plenty of beautiful old houses, shops and a quite busy street ! 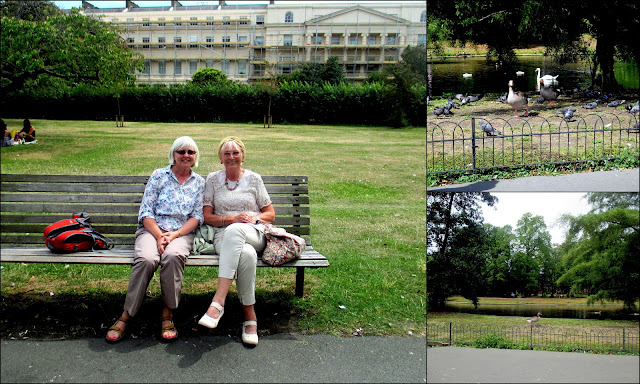 Just besides was the park where we sat on a bench and chatted ! There was so much to tell, that time flew by and suddenly it was time for me to leave. She went with me back to St. Pancras where we said good bye. Later we both stated that we hadn't have enough time to talk about everything we wanted to, although we had spent 4 hours together ! Then I checked in, and returned to Brussels, where Mr. G. was already waiting. I was so tired that I dropped my suitcase in my room and went to bed !