HOLIDAYS IN THE SOUTH OF FRANCE 4

In the morning while I was preparing my post, I observed Claudie's husband digging over the earth for his veggies ! 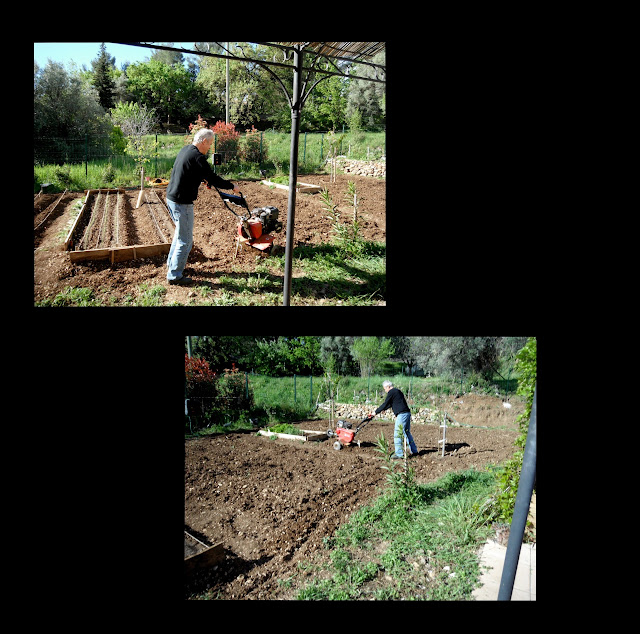 With all this love and care they will certainly be excellent !

Claudie had some appointments and afterwards we returned to Sanary for our coffee at the habour. 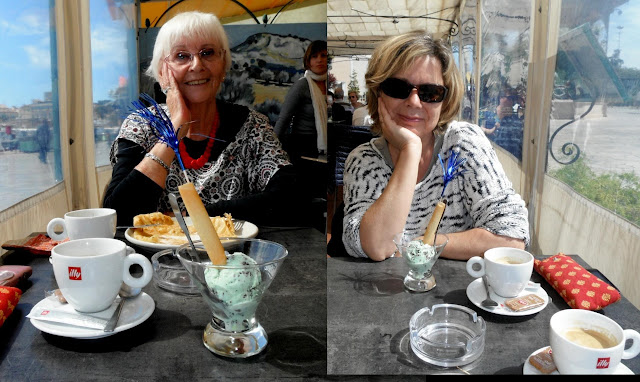 I had a delicious crepe and she an ice cream with our coffee. 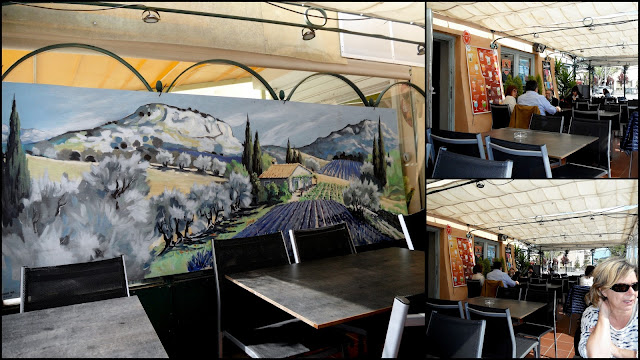 The little bar was very cute and the terrace well protected against the wind. 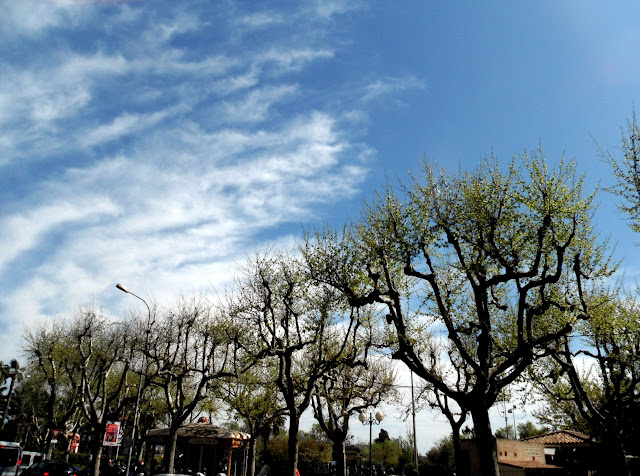 The sky was blue and I got the impression that each day the trees became more green ! 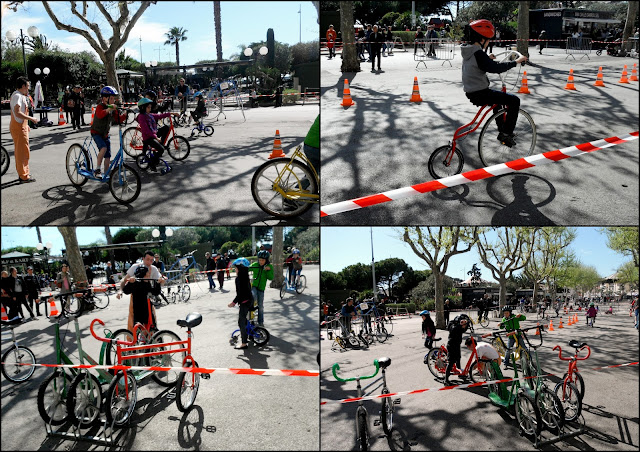 The kids still had a lot of fun with these fancy bicycles. I almost felt as if I would be in Amsterdam, except that the bikers were only concentrated on this place and not in the whole city.

The evening we for once were the three of us, Pierre had cooked us a wonderful meal as usual. It was fish, one baked potato, little carrots, an artichoke, and pieces of cauliflowers the whole served with an aioli sauce.Very healthy and tasteful !
Posted by Gattina at 11:44 1 comment:

HOLIDAYS IN THE SOUTH OF FRANCE 3

The mornings we usually spent at home, I doing my blogging and emails and Claudie potters around in the house.. 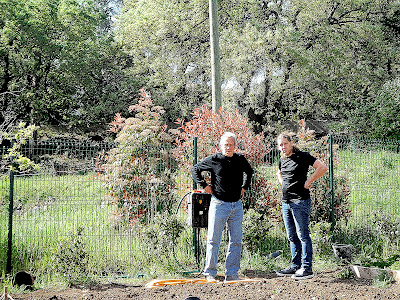 The men think hardly over what to do to water the veggies automatically with a timer and I thought we don't have this problem we have too much water ! 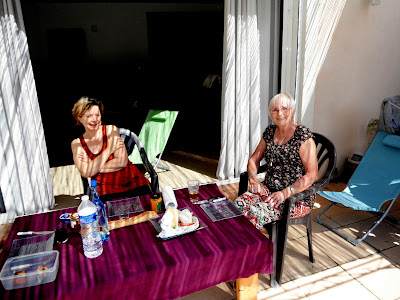 We chat and enjoy the sunshine. For the first time we could eat outside on the terrace.

In the afternoon we went to Sanary the closest little town at the sea. It is a charming place and lots of retirees  live here and therefore there are activities going on the whole year. 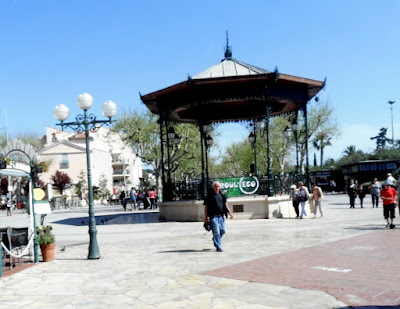 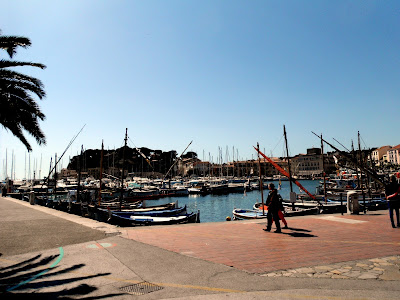 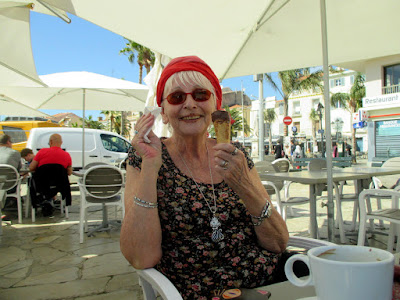 While watching the people going by, I savoured my first ice cream and Claudie's daughter took this picture with my black chocolate beard. 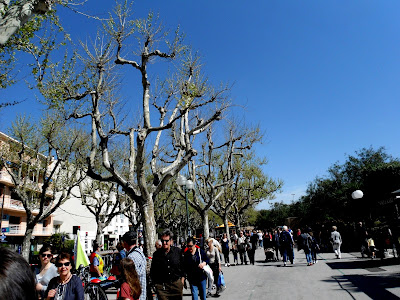 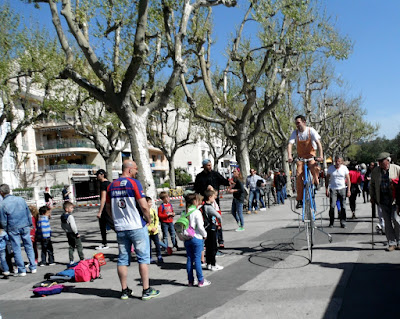 There was a show with old bikes 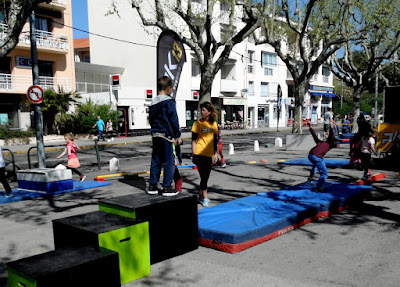 and of course lots of children activities 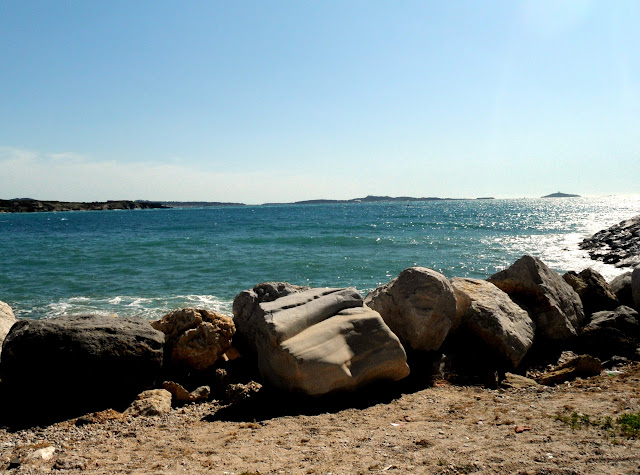 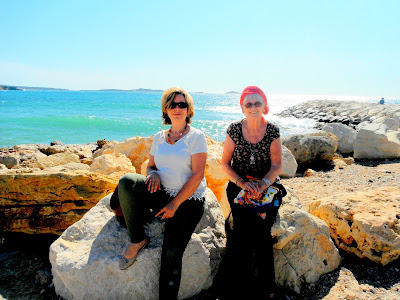 HOLIDAYS IN THE SOUTH OF FRANCE 2

The weather is getting as it used to be the other years ! Unfortunately the second day of my stay I started to feel as if I had caught a cold and immediately took strong medications to stop it. That made me very tired, so I spent the whole day home but could enjoy the sunshine. 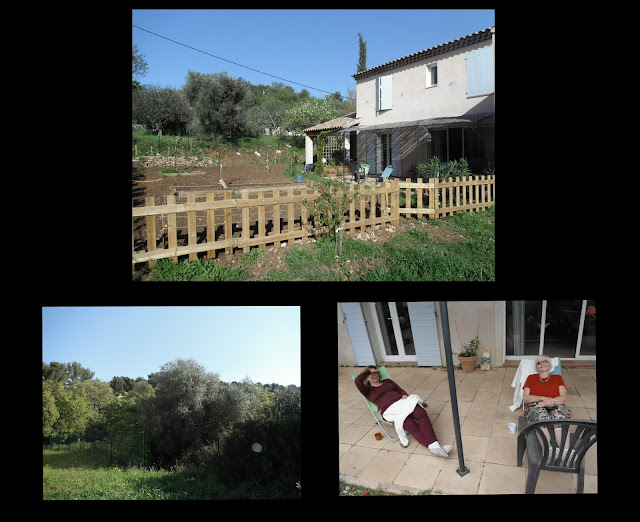 I was watching a little crime story I read I slept and Claudie did her things. In the evening pregnant daughter came with her boyfriend to have supper with us and we had a nice time and laughed a lot. I started to feel better but had to go to bed very early.

This morning greeted me with wonderful sunshine and we had our coffee on the terrace. We certainly will go to the sea today, if I feel OK ! It's a shame to become ill during holidays !
Posted by Gattina at 10:10 5 comments:

HOLIDAYS IN THE SOUTH OF FRANCE

Monday morning at a quarter to 3 am I got up, dressed and Mr. G. drove me to the airport. There was a long line of cars and military trucks and 8 or 9 soldiers heavily armed with machines guns, and black socks with two holes (for the eyes) on their heads. If they wouldn't have been in uniform, I would have taken them for bank robbers. They stopped car by car to check if we had boarding cards. I had and Mr. G. was allowed to drive me into the parking and from there I followed the sheep flock until the entrance of the airport. 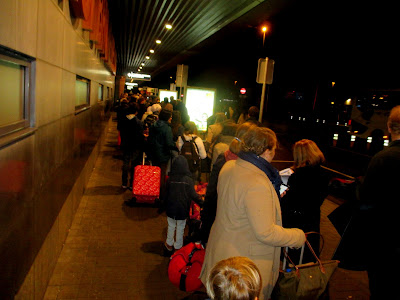 Fortunately it was not winter and snowing ! Then our passports were again checked by two soldiers. Inside again by two employees before we could get rid of our luggage. Controls again, I had to open my suitcase, probably I looked like a Granny terrorist. Then finally we could take the airplane. The whole procedure had lasted 2 h for 1 1/2 h flight. But then came a big surprise in Marseille. Instead of walking through the airport to the exit, we were again controlled, which is absolutely not right in between the countries of the European Union ! And the worst was, from 4 counters only one was open with two guys who controlled the passports and identity cards ! I felt like in Egypt ! When it was my turn and the guy saw my German passport he waved me away like a naughty fly he only controlled the Belgians. We are all terrorists apparently. I thought how crazy is that, the terrorists must rub their hands causing so much trouble, they certainly won't attack twice an airport and certainly not such a little one like Marseille.

It was very early at 8.30 I was already sitting in the airport hall enjoying a coffee, when Claudie came and picked me up. 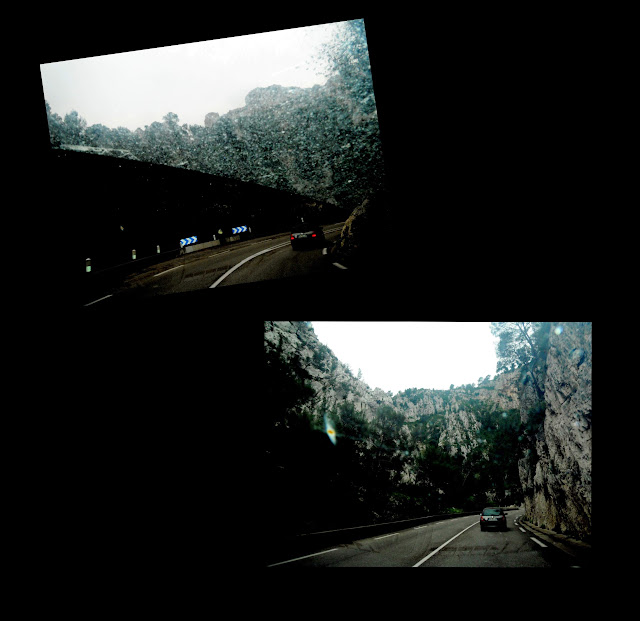 The weather was not as usual when I am here, it was cloudy and rather cool but it was nice to drive through the mountains again !

I was very tired in the afternoon and fell asleep reading a book. Claudie had gone shopping. In the evening her highly pregnant daughter came over together with her boyfriend. She looked as if she had swallowed a football (soccer) ! It will be a little girl. We had supper together and then I went to bed and slept through until 8.30 am !

The next day the sun came out and it also was much warmer. I spent the morning sitting on the terrace taking a sunbath !

In the afternoon we visited a friend of Claudie. 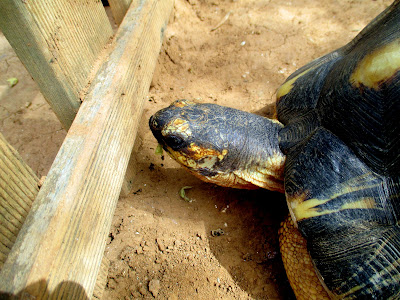 In her garden she had two enormous turtles 13 kgs each !! As they are two males they live in two separate enclosures and the winter they sleep like two stones in the dining room. They were so beautiful ! 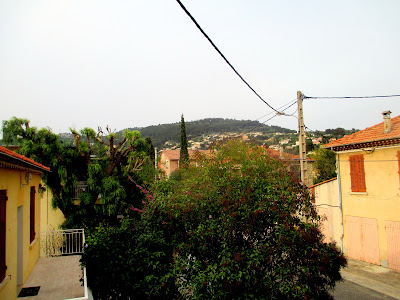 I took this picture from Claudie's daughters flat, we picked her up and as it was so nice and warm
we went to the sea ! 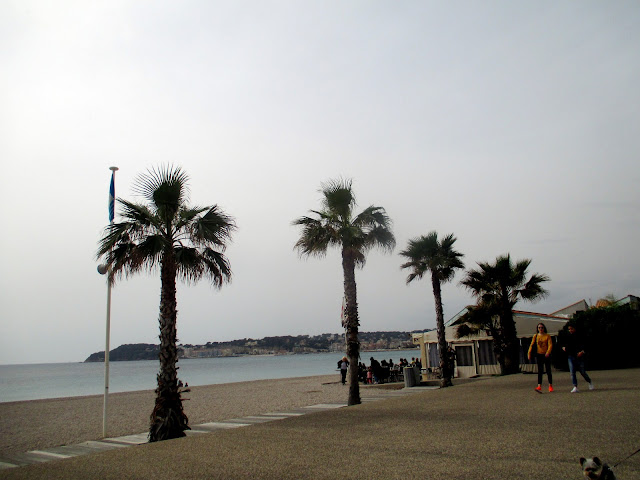 And there we sat on the terrace of a café on the beach and had a drink ! It was the first time since November that I have seen a sea again ! Last time was in Egypt. It didn't look very blue, but that will certainly be for tomorrow !

While this post is published I should sit in an airplane taking me to the South of France visiting my friend Claudie, as I do each year. 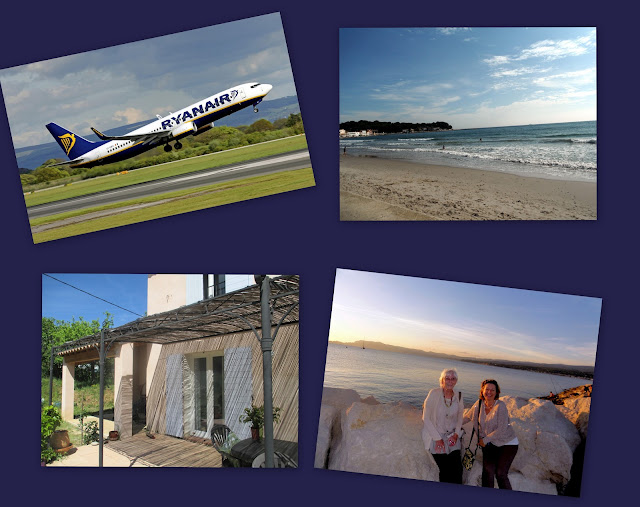 Fortunately I don't take my plane from Brussels' main airport, because it is still not working or only a bit, but from the second one called Brussels'South. Nevertheless I have to get up at 2.30 am ! My flight is very early at 6.45. Claudie then picks me up at the airport in Marseille.

I then will blog from there.
Posted by Gattina at 06:30 7 comments: