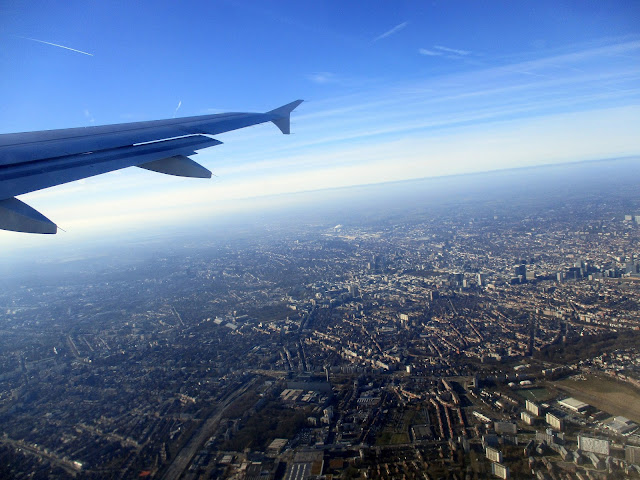 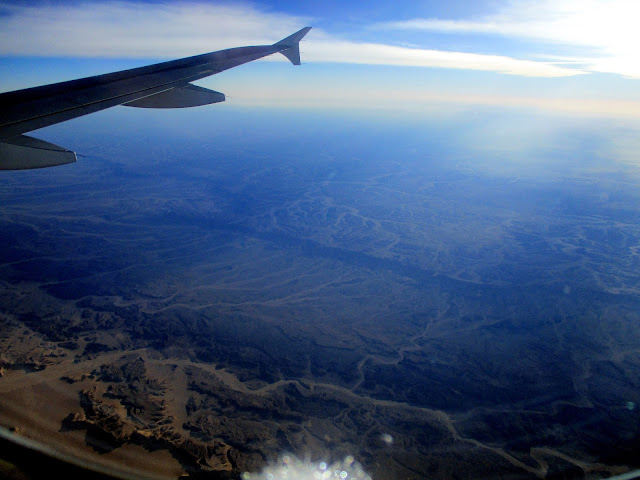 
This time our weekly scrabble was at Mireille's home. 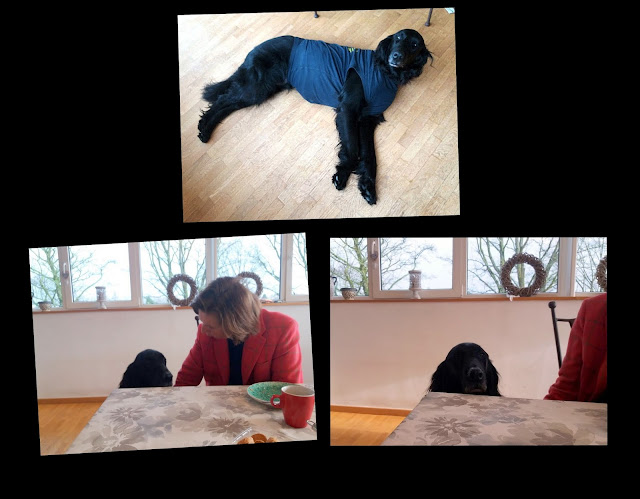 Her dog Tosca had a surgery nothing very serious but has to wear this very elegant T-shirt, so she doesn't leak her wounds. Of course she took the opportunity to ask for cake, as she was soooo sick !
As usual we had a very nice afternoon.

Nicole is full of energy since our Egyptian holidays and wants to do a lot of changes in her apartment, and replace or repaint her furniture. So after lunch we went into a furniture store where she was looking for a cabinet with an built in bed ! These kind of cabinets you find easily in Germany or Holland because the rooms are so small but not in Belgium. 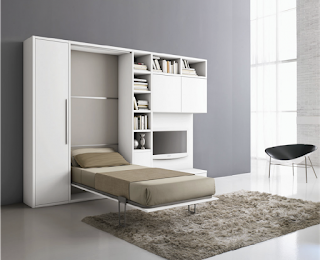 Something like this, because she has no extra bed for visitors and I told her if ever I have to spend a night at friends I couldn't even come and knock at her door ! Unfortunately we found nothing and probably have to go to Ikea, they are specialized in furniture for very small rooms. 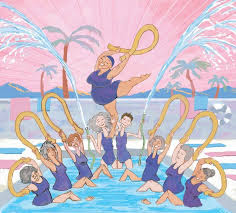 Our aqua gym animator (a young man)  was in great shape, too much for us vintage ladies, so we asked him if he had taken some energy pills or drinks ! He replied that he doesn't need it but we do ! We had a lot of fun but the next day I realized that I had used muscles which apparently I don't move normally and it hurt a bit. Good for the health !

For the moment in our painting class quite a lot of students are missing. Two "girls" have cancer, and are absent of course  One is our teacher and with her there is no hope anymore and she is in palliative care. We are all very sad. She is such a sweet and nice lady and was such a good teacher. All we can do is call her and cheer her up. I only hope that the other will recover.

We have a roller coaster weather and therefore a lot of sick people. The flew came back and lots of people have bronchitis. The temperatures are zig zagging between 13°C and - 6° ! Each time when we think that winter is over it starts to freeze again !
Everybody is so fed up ! It seems so long this year. 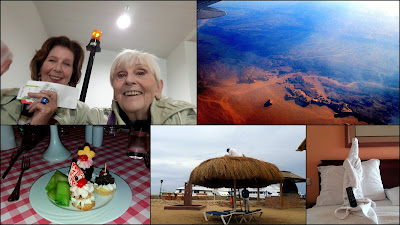 Without any hesitation, in Hurghada Egypt !

2. What's something you should say yes to today? Or this week? Or even this year?

3. Do you celebrate St. Patrick's Day in any way, shape, or form? If so tell us how. In Western cultures the color green is typically associated with jealousy, nature, good luck, and growth. What's the first thing that comes to mind when you hear the word 'green'?

St. Patrick's Day is completely unknown in Belgium. The color green is considered as a "cold" color by painters and I don't like it at all for furniture, clothes, decorations etc,  but I love all greens in nature, woods, pastures, parks, gardens  .....

4. What's a product or service you love so much you'd happily be their spokesperson? Tell us what makes you such a fan.

I am a fan of nothing. I love something or not. I can defend a cause when I believe in it, even be their spokesperson, but nothing comes into my mind right now to answer this question.

5. March 14th is Pi Day. How are your math skills? What's the last thing you did that required math of any kind? And most importantly do you like pie? What's your favorite kind? With ice cream, whipped cream, or please hold the cream?

I never heard about a Pi day and for those who are in the same case as me I looked it up and found :

Pi Day is celebrated on March 14th (3/14) around the world. Pi (Greek letter “π”) is the symbol used in mathematics to represent a constant — the ratio of the circumference of a circle to its diameter — which is approximately 3.14159. Pi has been calculated to over one trillion digits beyond its decimal point. etc etc.

Celebrated around the world ???? I doubt about it very much ! and as I never bake pies, I don't have to calculate. Anyway I hate calculations and praise the day calculators had been invented !

I need to do some shopping and think about what to buy. It rains cats and dogs and I wonder if  I will go or not. 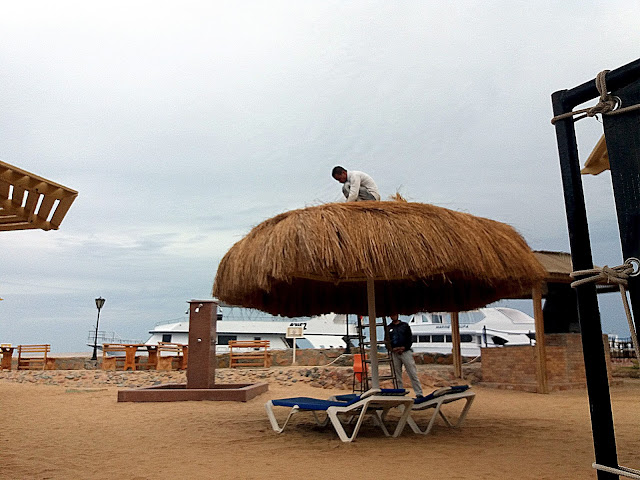 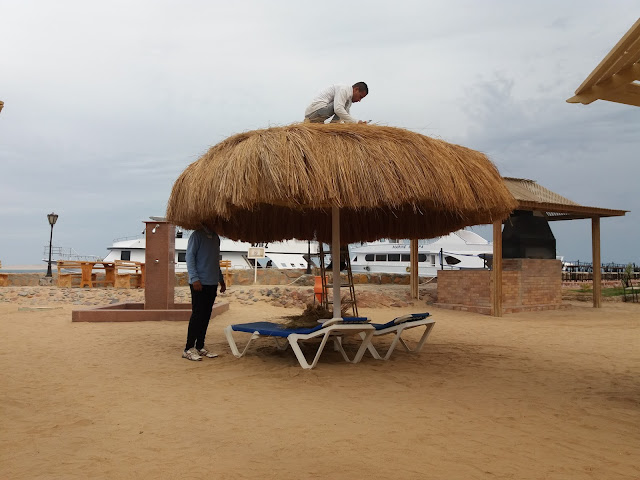 OUR WORLD - THE COPTIC CHURCH IN HURGHADA EGYPT

Although I thought to know the old Hurghada very well as I have been so many times in this city, but I had never been in the Coptic Church. Amongst the Mosques it is the only Christian one. 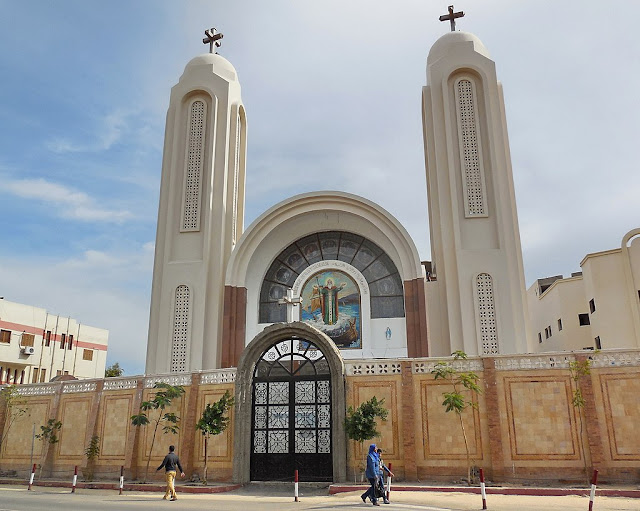 Saturday was a real lazy day, where I didn't dare to go out because it was so wet and I am still a little anxious that my breathing problems come back. Since I have been at the Red Sea in Egypt, I have nothing anymore and don't whistle like an old locomotive when I come up the stairs.

But in the evening we had super show at the theatre in the Waterloo city hall. It was as usual for the seniors.

This time it was a show with the very famous (in French speaking countries) press cartoonist Pierre Kroll. 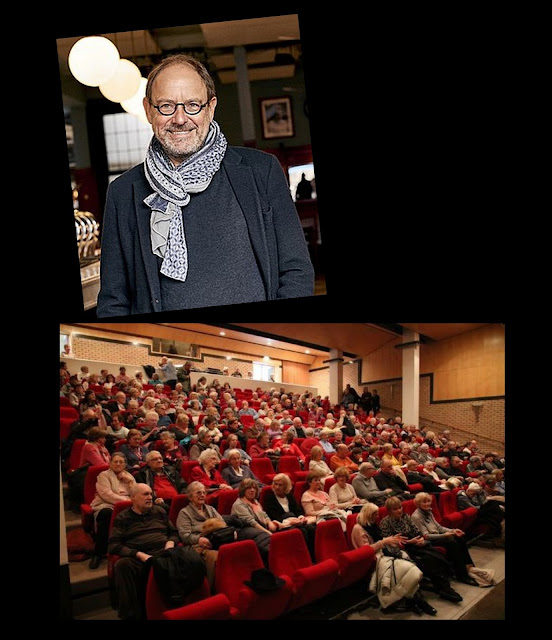 The theatre was full ! Nobody wanted to miss him. 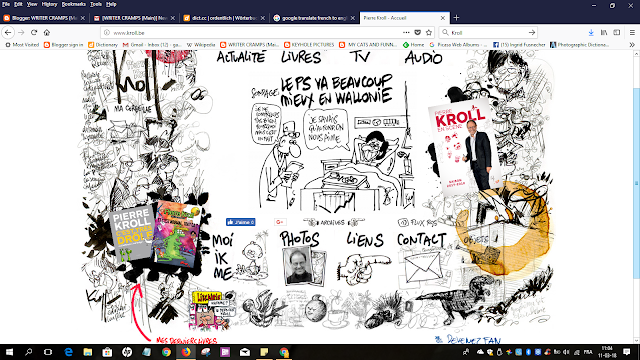 His political cartoons are hilarious and so true. He has a very sharp humor and makes humor out of the most dramatic things. He is for no religion, for no extremists whatsoever and not a racist either. In the beginning of the show he told us that he was  born in the at that time "Belgian Congo" and of course surrounded by black people, far more then whites. When the family had to go back to Belgium at the Congo's independence he was a 3 year old toddler and traumatized by the fact that there were more white than black people and he had never seen so many and not even one black ! He therefore cried and cried and his parents had all difficulties of the world to comfort him.

It was a very funny show and our bellies hurt so much we laughed, as the whole audience did.

Of course we couldn't end the evening just like that it was early only 8 pm, therefore we decided to go into a nearby located restaurant in a tiny little street in Waterloo center. 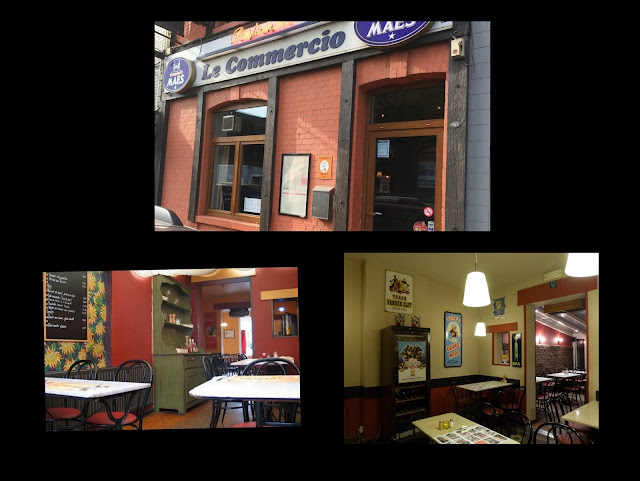 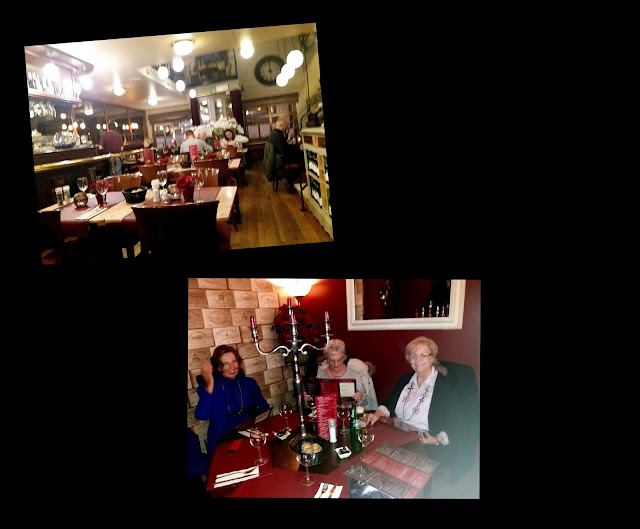 The food there is excellent and we enjoyed the evening very much.

Of course it rained on Sunday morning when I had the intention to go to the midi market in Brussels, where I hadn't been since at least a year. So I stayed home and computered. 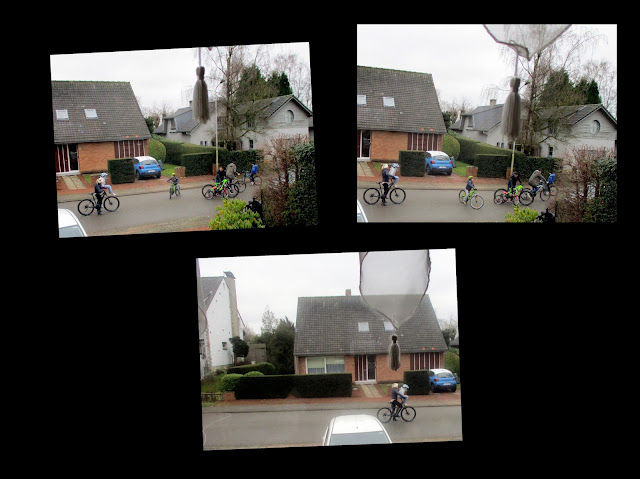 and while looking out of my window for inspiration, I saw quite a lot of bikers, because it had cleared up. Ever since the Waterloo Newspaper had declared that it is very dangerous to ride a bike in the city, our street has become a favorite target for bikers as there is nearly no traffic in this street and the streets around. I almost felt like little Amsterdam !

When I had finished with everything I had to do on the computer and in the house, 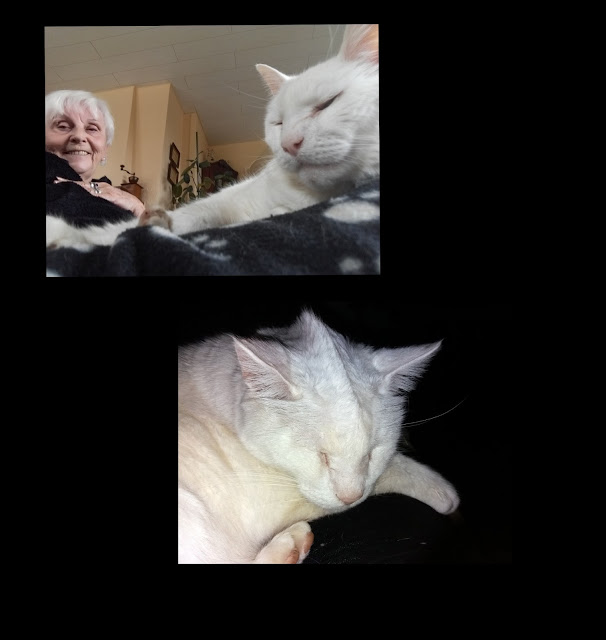 I watched funny crime stories on TV. Arthur slept on my lap and I took the opportunity to make a punk out of him. He didn't care ! 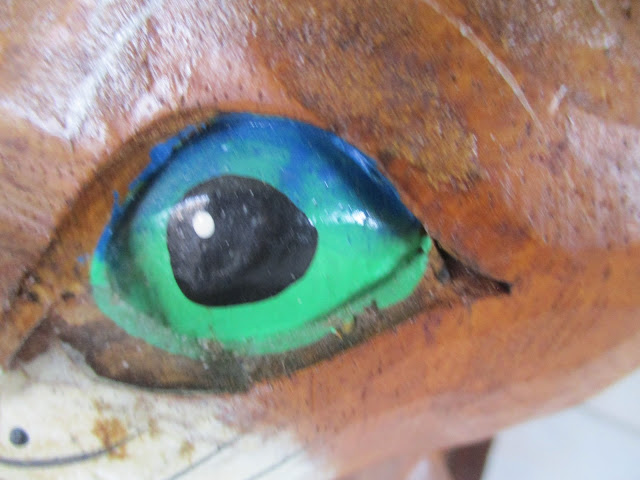 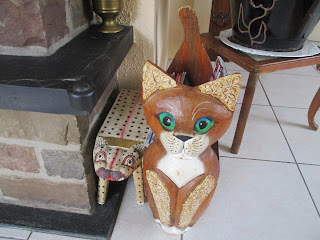 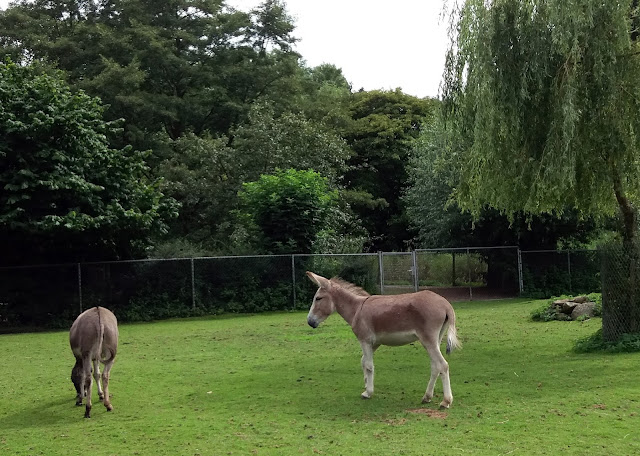 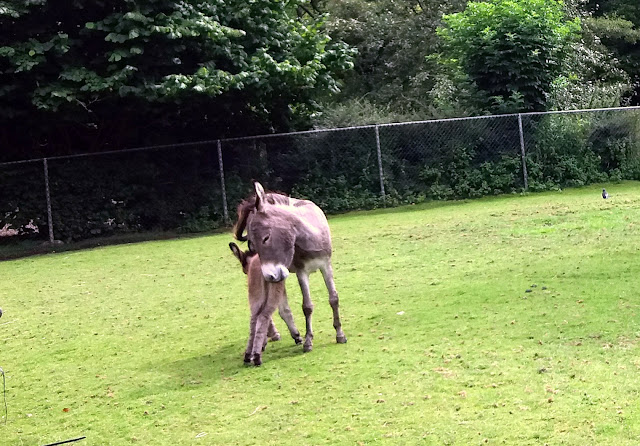 These photos date from last summer, because due to the bad and cold weather I haven't seen any other animal then my cats and dogs on the street ! 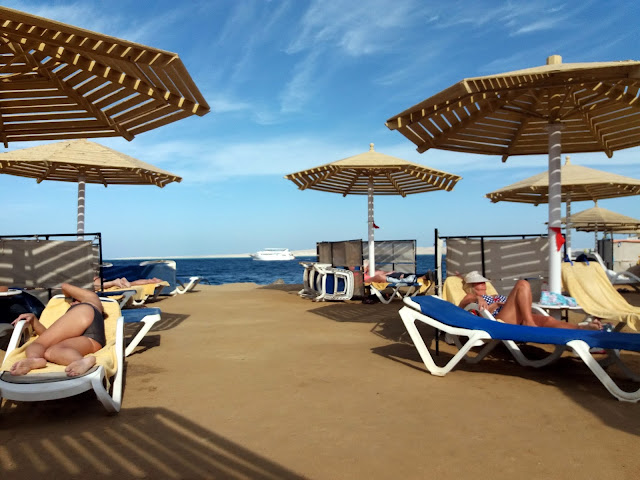 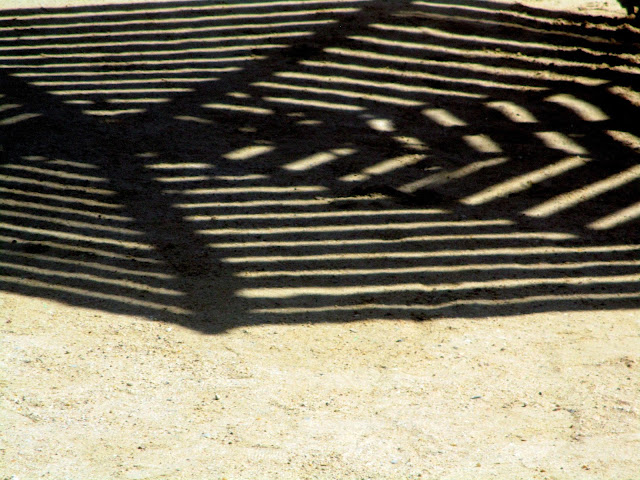 Not even two weeks ago in Egypt.