1. After our vivid weekend, the silence moved in again, only interrupted by the morning non stop meows of cat Pookie who wants to have breakfast at least 10 times. After all she will be 92 (19)in human years so she is excused. It's only hard for our nerves. The silence is interrupted by Mr. G. loud (very loud) plead to Pookie to stop. 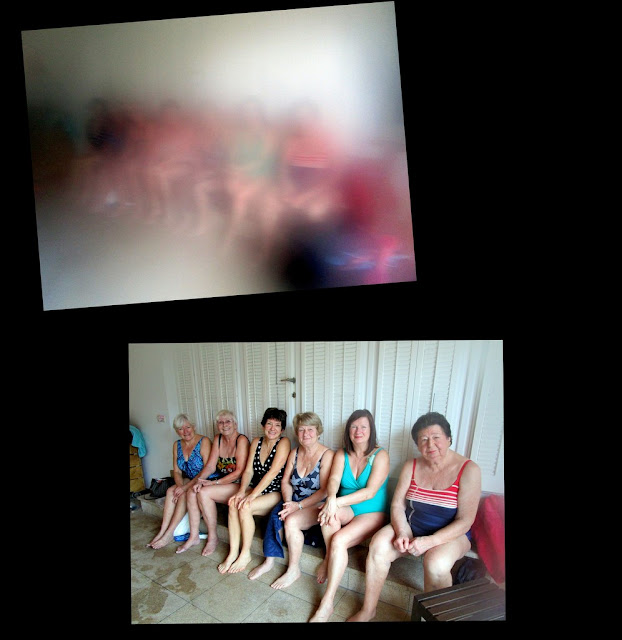 When I arrived at my aqua gym, the previous class was a little late, so we all sat on the steps and waited to go into the swimming pool. As I had my camera with me one took a picture of us all sitting there, together (a few missing of course). But on the first picture she didn't pay attention and we are all hidden in steam ! It was as usual very nice, I like my new classmates because I had changed from Monday to Wednesday and have now a young man as teacher.

3. Nicole is a bit depressed, she likes to go out walking or visiting exhibitions or whatever and being occupied. She also feels like a prisoner. So I went over and we spend the afternoon together chatting and waiting for better times. 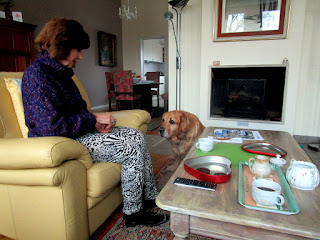 4. I had a blood test done on the request of the dermatologist who can't find what a strange disease I have if ever it is one.

I get from time to time  a rush big like a hand, always on other parts of my body, legs, thighs, arms, or belly etc. It happens from time to time without any reason, sometimes after 2 or 3 months or two weeks. It had started last year in June. Besides the fact that it itches terribly, it doesn't bother me at all. But it bothered the dermatologist, she is very ambitious and of course she couldn't stand that she couldn't find what it is.

She kept me one hour on the phone to explain my blood test results. Of course I am close to the graveyard if I would believe her. After having told me to change the bedlinen, and wash it immediately to what I answered, that I had the rushes also in Egypt, France and England, with other bedlinen, she declared that I am ALLERGIC to CATS !!  I had to laugh, I told her that I live nearly 60 years with cats and that I have no eye itches or a running nose or other symptoms of a cat allergy, to what she answered that probably my body got used to it. 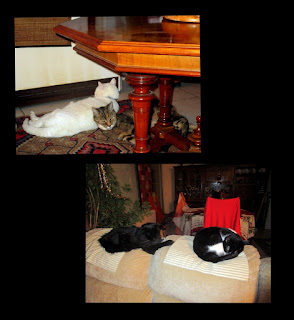 At this moment I had enough. I didn't want to play her guinea pig to find out what I have, I feel good I have nothing why should I start with tests and medication or whatever, so I politely ended the conversation and told her that I would go with the test results to my house doctor. She didn't like that at all which made me even more suspicious, she said I should go to a specialist and gave me a name ! I said yes, yes, and hang on. Ilona was on Skype and had listened to the whole conversation. She told me immediately, don't go back to this doctor ! She only wants to make money and certainly gives you a lot of medicine to make the drug industry rich !

I agreed. Why inventing me diseases ? I am not a hypochondriac ! It's now at least a month that I didn't have this rush, so I can live with that and just put an anti itch cream on. Besides that I have too much of Vitamin B12, where most of the people don't have enough !

After that I told my cats that they have to go away, because I am allergic, but instead Arthur settled down on my lap to watch TV and Rosie behind my neck on sofa. And no rush came !

5. I tried out something new in my painting class. I had seen in a video a painter painting with his fingers ! I thought that's something I want to try out. To the horror and surprise of my classmates I dipped 2 fingers in a blue color and put it on the canvas. I worked very well and was such a fun to do. 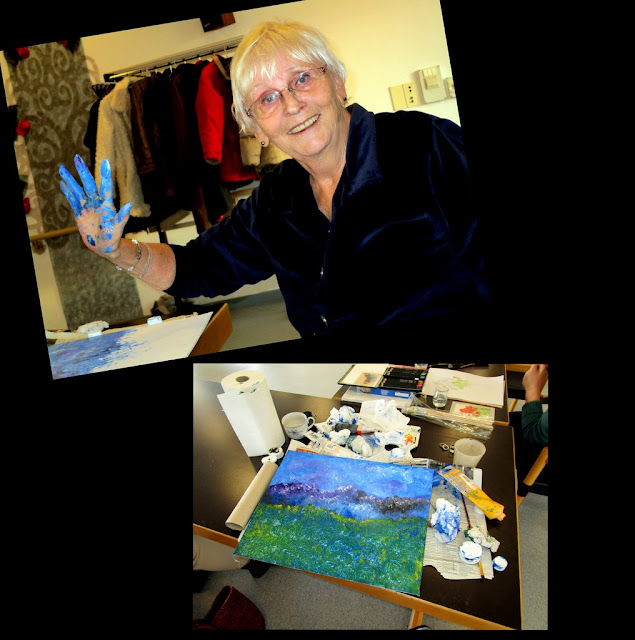 The painting came out quite nicely and my clothes were still clean. My blue hand was quickly washed as these are acrylic colors. Now some others want to try that out too ! 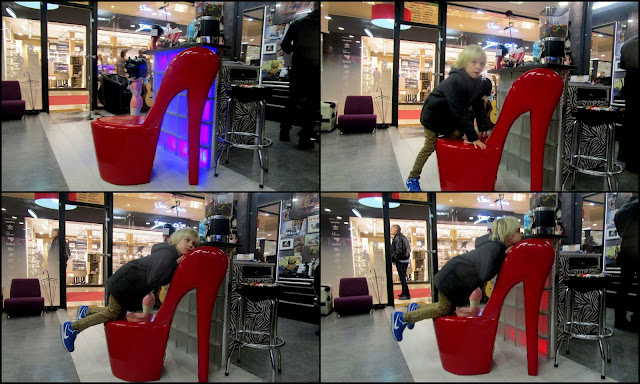 Grandson Toby at the hairdresser


1. Can you believe it's the end of January? What was the best day of January 2017 for you, and why?
Can't remember a best day ! They were all the same, cold, grey and boring !

2. What sounds make up the background noise in your life?
It depends, if I am inside silence, if I am outside and the sun is shining the chirping of birds.

3. I read on the Power of Positivity website a list of ten things to drop from your life right now. They are-
anger outbursts, people who put you down, regret, negative self talk, being a people pleaser, the notion you need to be perfect, the past (but keep the lessons learned!), gossip and judgement, comparing yourself to others, and the word hate (focus on what you love instead)

I don't have to drop anything, because I don't have such a list !
What I love is talking to my cats, going out with friends, planning travels, chatting with people, reading mails from my blogfriends, and sunshine of course !

Which thing on the list do you most need to drop? Are you trying or will you try?
As I said, this list doesn't fit at all  !

4. What is sacred to you?
That's a difficult question, until this year I would have said Christmas eve, but even that is gone now.

5. January is National Oatmeal month. Are you a fan, and if so how do you like it?
I don't like it at all !

6. What feelings does twilight stir up in you?
No special feelings, except that I would think that I have to switch on the light ! When I am on holidays happy.

7. Something you're looking forward to next month?
After this dull January month without any special events, now in February there are plenty to choose from.

8. Insert your own random thought here.
I am happy that January is over, only two month to go and we will have spring ! Longer days and the air smells so good when it starts to bloom.

One year after our arrival in Waterloo in 1975, which at that time was rather a big village, it started to expand from a village to a small town. The first supermarket showed up and the Wellington Gallery was built in 1976. Initially the gallery had only one wing with a dozen shops. Now there are more than 80 shops, snacks, hairdressers and a cinema,  that share the 6540 square meters of the gallery.

It's especially nice to walk through the gallery when the weather is cold or bad. There are a lot of posh boutiques, leather goods and shoe shops too. The prices are accordingly. 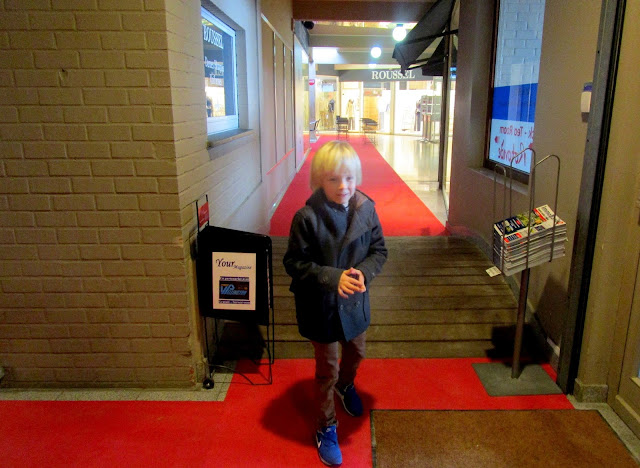 At the entrance my grandson is waiting for us 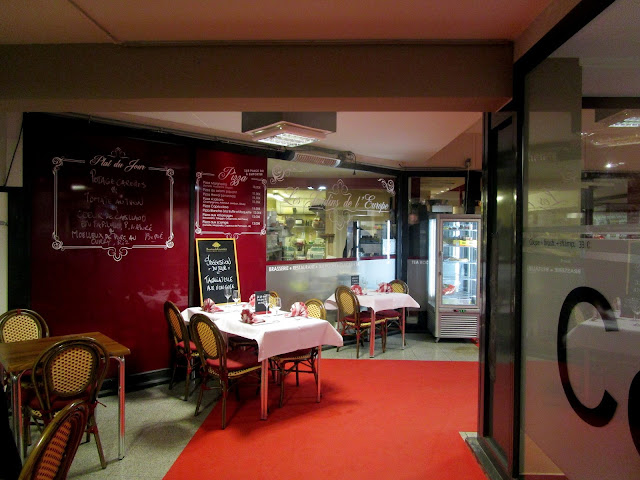 a little further there is a nice Italian restaurant 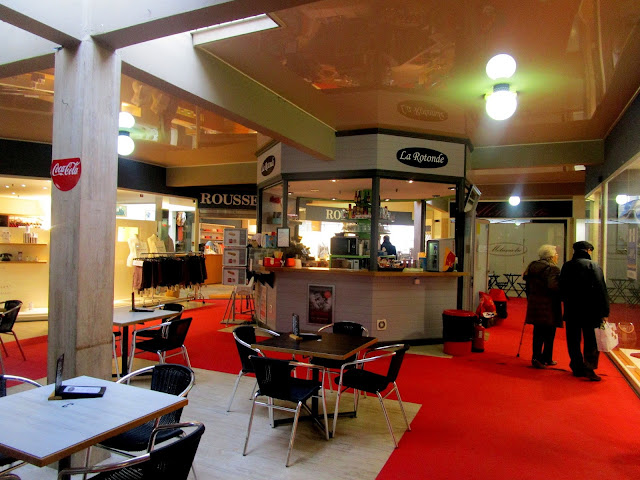 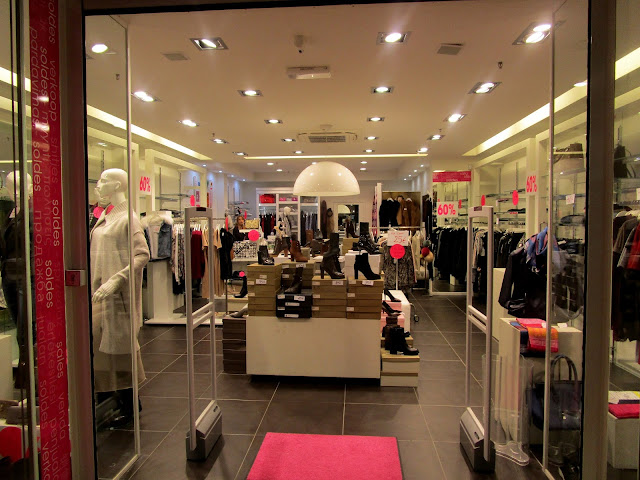 one of the shoe shops 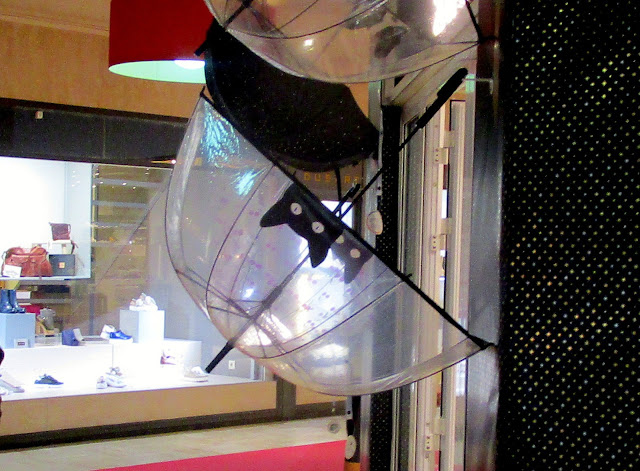 I loved this umbrella ! 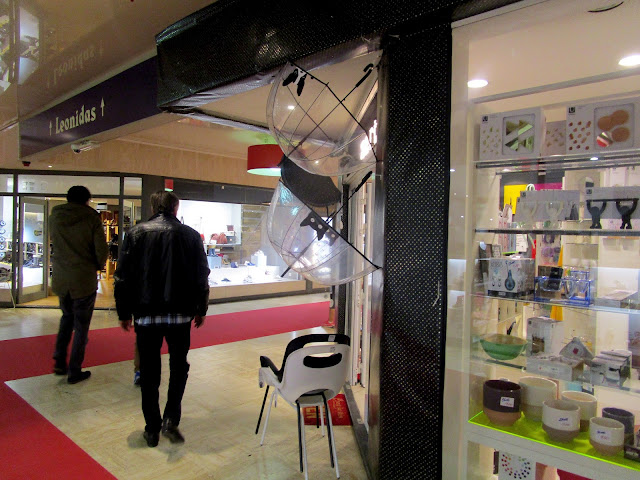 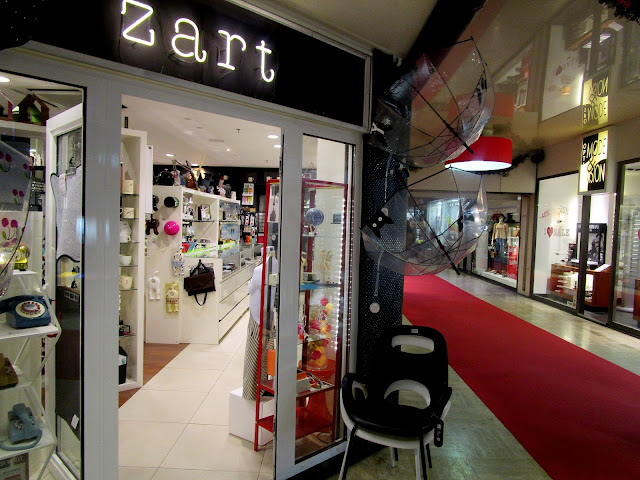 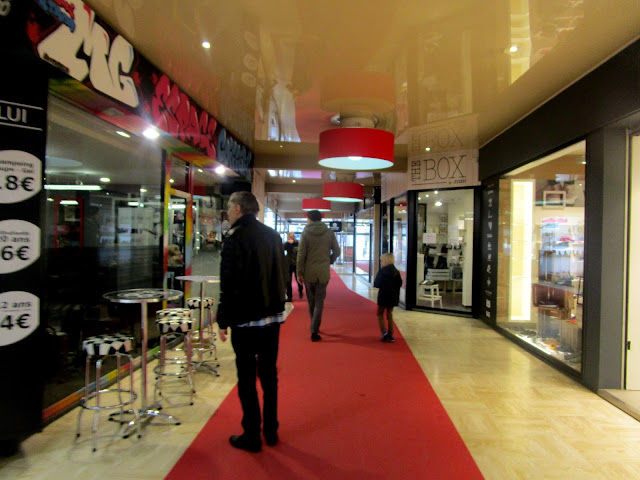 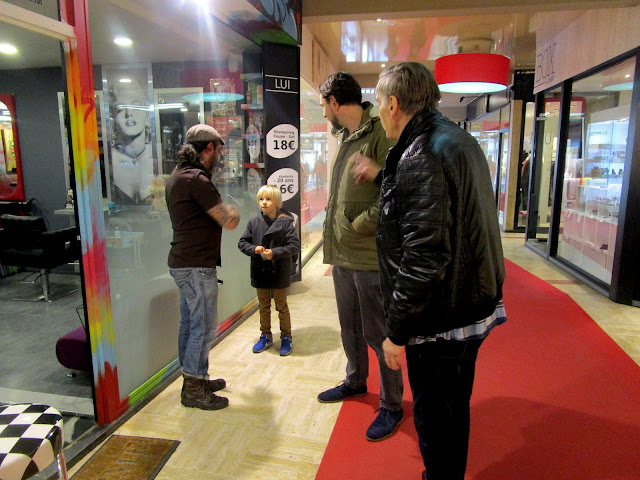 talking to the Italian hairdresser 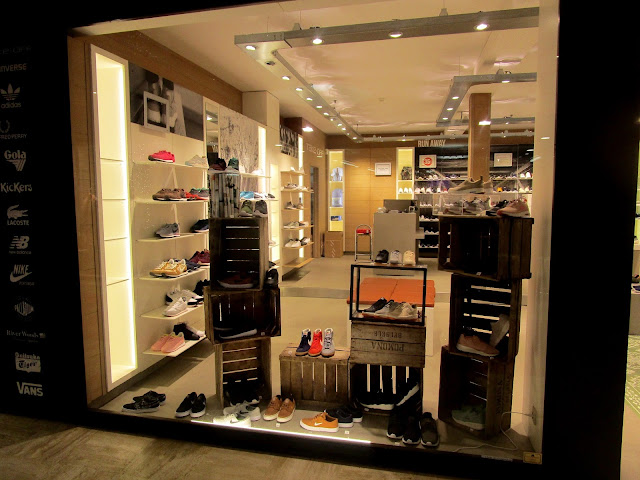 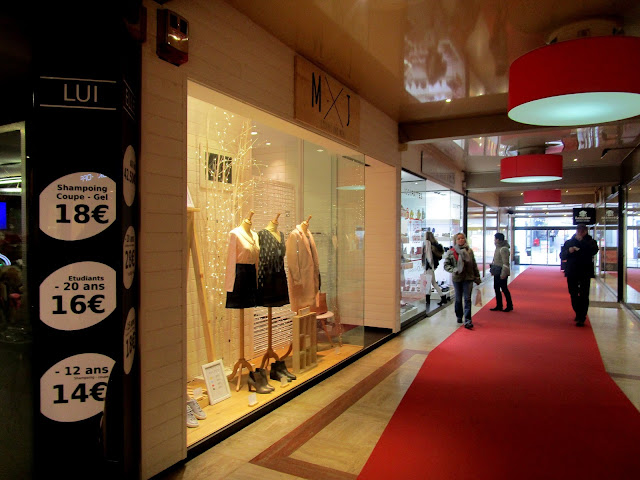 Grandson went to the hairdresser (see post below) and after some window shopping we returned home.

This weekend we had son and grandson on visit, which put a little turmoil into our calm life of retired oldies, or vintage couple. It was fun !

Saturday morning we went  for a coffee and croissants to "La Brioche". 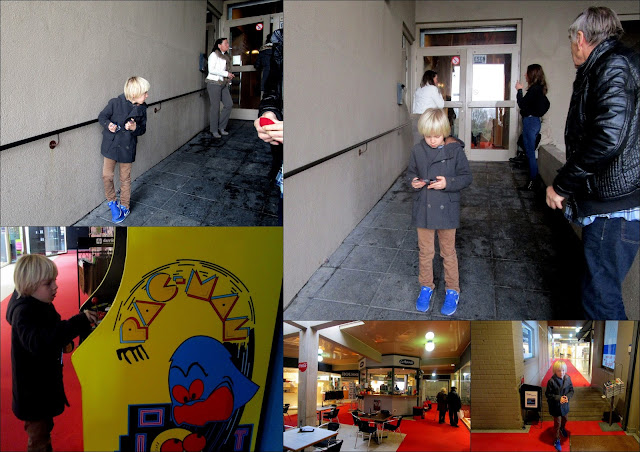 For that we had to go through the Gallery Wellington, 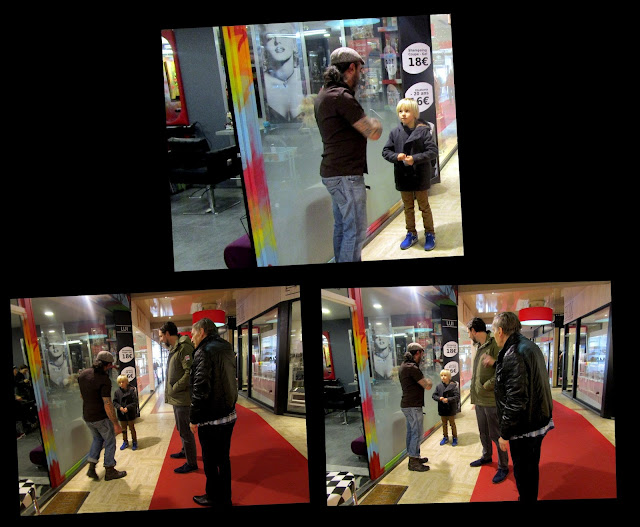 where we met Mr. G's hairdresser. He is a little very temperamental and hearty person. They know each other for at least 30 years and had also cut the hairs of our son. Therefore he proposed to cut Toby's hair. after we had had our coffee. 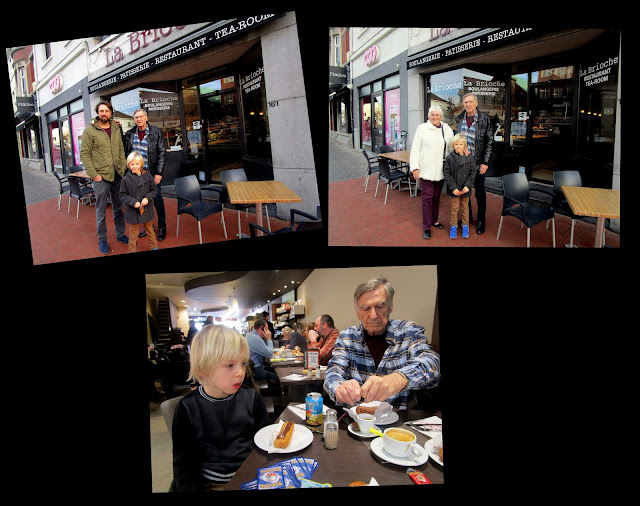 So we went for our breakfast and Toby ate two pastries filled with chocolate, he has a very good appetite, because at home he just had cornflakes with a milkshake !

When we had finished we returned to Gaetano the hairdresser. His salon is very funky, and the music was from when we were young all songs from the 60th 70th. He offered us wine red or white, but we thanked just after the coffee it was a bit early, and then with this Italian hospitality for friends he wanted to offer us so many things to eat, and finally came back with olives and peanuts. 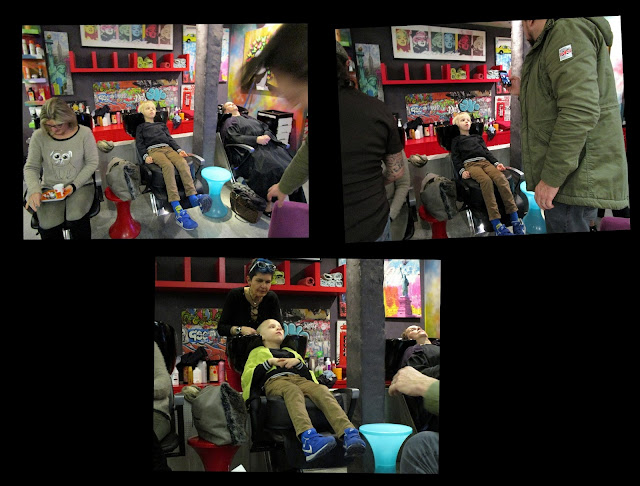 Then it was Toby's turn. He behaved like an adult, so quiet as if he would go to the hairdresser every day. I remembered his father at that age who was just the opposite and I and the hairdresser had to occupy him with games to keep him quiet and didn't turn his head around all the time. It was a very tiring affair, while here not at all ! 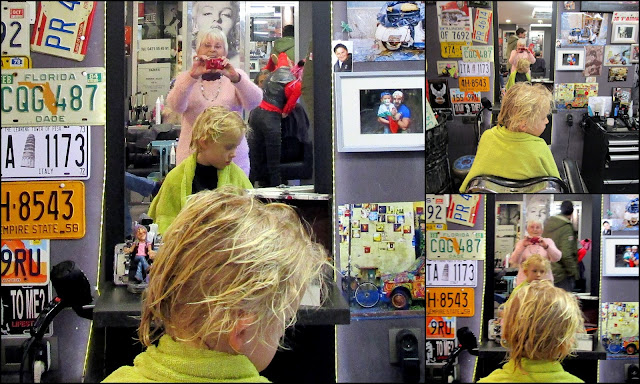 when the hairs were washed he moved to another seat and I took these pictures. 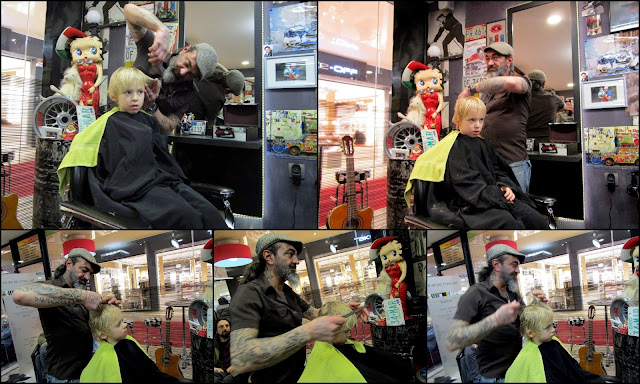 We were all satisfied with the result.

After lunch Mr. G. went with them to the Kid's factory the inside playground where my son met a friend with son. I stayed home and rested a bit. I am still tired from my breathing problems. But it's much better now since the temperatures increased and it is not so humid anymore.

In the evening we watched a little movie together, while our son took the opportunity to go out and meet a friend. Then we all went to bed. Now it's so nice to communicate with Toby, his French is each time better and anyway we communicate if necessary with hand, feet and drawings and a lot of laughter of course.

After breakfast on Sunday morning Toby watched the series for kids on TV, 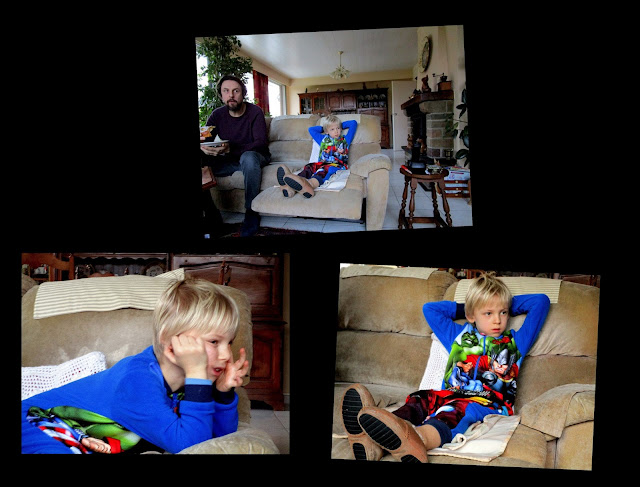 he was a bit disappointed because we couldn't find a Pokemon movie, but he also liked Tom & Jerry. 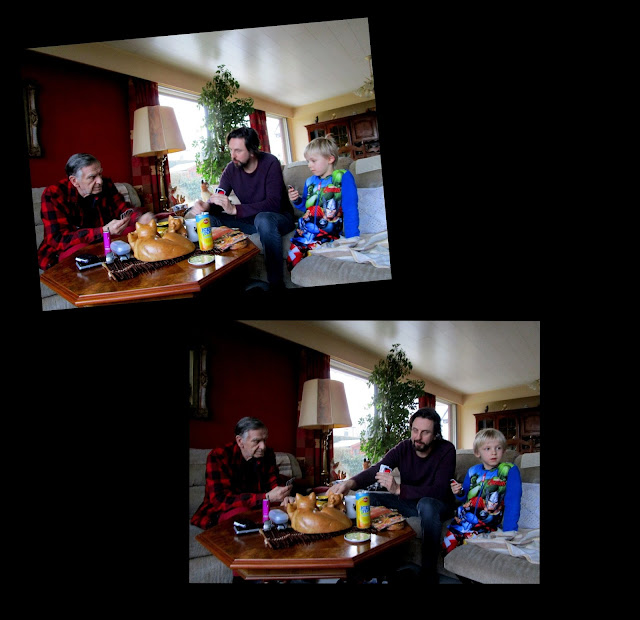 Then three generations played cards a game called "Uno" it's very easy, so easy that Mr. G. had enormous difficulties to understand the rules because they were too simple. Toby was proud to be able to explain the rules to his Nonno, but still I think that Poker rules or bridge are  easier for him to understand than a game which is only based of colors and a few obstacles. 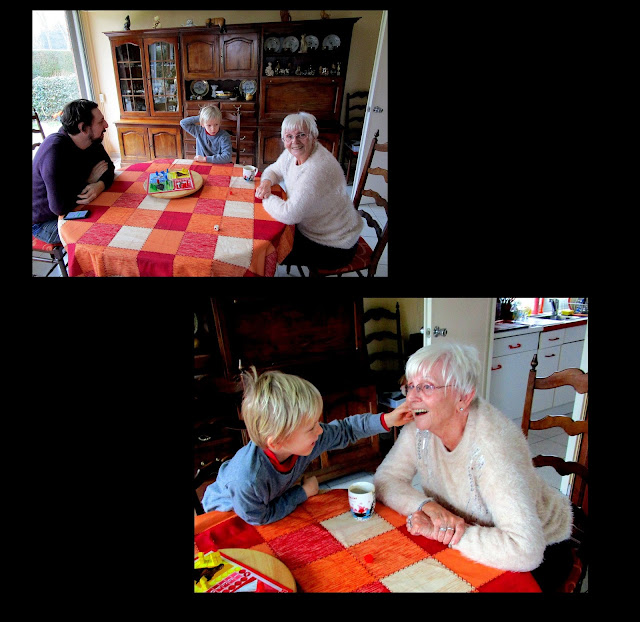 The weather was not good enough to go out it was very windy, so we played "Ludo" together. I had bought it the day before and it was in form of little horses you had to put in the stable. At one moment Toby didn't want to play anymore, because he lost, but then he came back, because we 3 others continued. 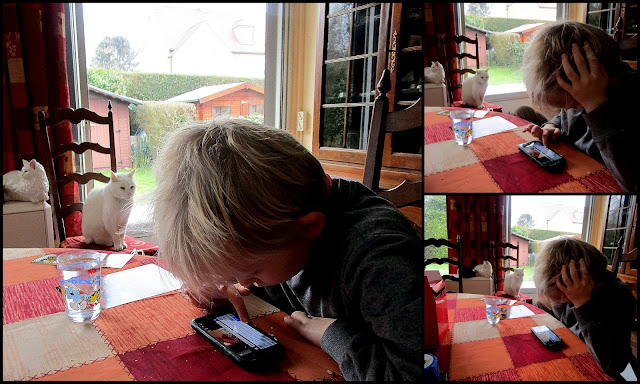 and while I was in the kitchen to prepare lunch I saw him with his Dad's smartphone busy to type messages probably to his mum ! I thought that's real crazy I have no clue how that thing works and a 6 year old deals with it like a professional !

Time flew by and after lunch they left to return to Amsterdam, and we spent the rest of the day behind computer and TV.
Posted by Gattina at 07:00 13 comments: