As usual we started the week with our Scrabble. The sun suddenly decided to come out and it became so warm that we agreed to play on Nicole's terrace in the sunshine rather then inside at Mireilles'. We also had two birthdays to celebrate and before the game we had a glass of champagne. 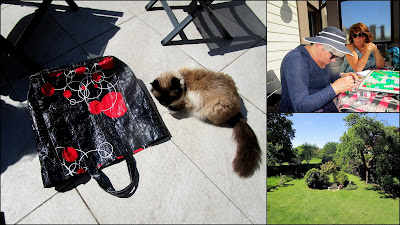 Nicole's cat Isis checked the bag probably because it smelled my cats. Mireille had to borrow a hat the sun was so strong. She loves light because as she is half blind with a lot of light she sees better. We spent a very nice afternoon.

The next day while I drove to the clinic to visit Mr. G. my phone rang and they told me that he can leave the hospital on Tuesday ! When I arrived there was a young girl there,  the Social assistant who coordinates all the advices and prescriptions from all those who had taken care of Mr. G. I didn't understand a thing what she said and Mr. G was even worse. She didn't know anything, she replaced the one who was on maternity leave. I gave up and was very upset. Fortunately my helper Isabelle who saw me in this state of stress, told me that she will take care of everything. And she did.

When I came back from aqua gym and hairdresser, we sat in her garden and she explained me everything what has to be done for his coming home. She had hired a male nurse, a lady for the kinesitherapy, had called the insurance company for the papers they needed from the hospital etc etc. I don't know how to thank her !!

Then I prepared with the cleaning lady the house ! She put all rugs and carpets away, Isabelle brought crutches and a bath tub seat and now I think everything is ready. Can't put out a red carpet, if I don't want that he breaks the other hip !

Nobody was motivated for painting so we mostly discussed hip operations ! Four in my class had it done already. When I told them that Mr. G thinks that as soon as he is home he can hop around, doesn't need help for a kinetheterapy etc they all laughed. He just doesn't realize. Or he will be the miracle of the year.

We went together to the Asiatic Restaurant and had a nice meal.The owner has changed it belongs now to a Chinese lady. The kitchen is better, and some decorations had been done too. 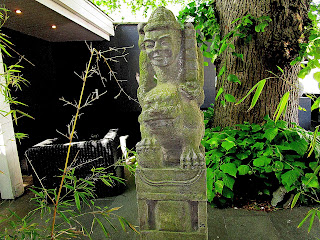 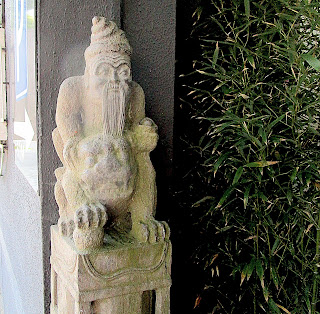 At the entrance you are greeted by these two "gentlemen" 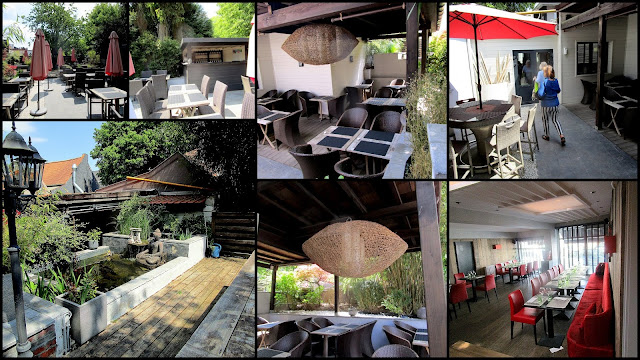 The garden had completely changed and looks absolutely beautiful. Unfortunately it was too cold to eat outside but it is for sure that we are going back when it's warm !

I am quite tired with all the stress preparing the homecoming of Mr. G. I realize that I am not so efficient anymore as I used to be. I have to write everything down otherwise I forget ! Hopefully the worst is over now ! Or it will start if I have to fight with him that he does what the doctors had said !

WORDLESS WEDNESDAY - WHERE ARE MY KEYS ? 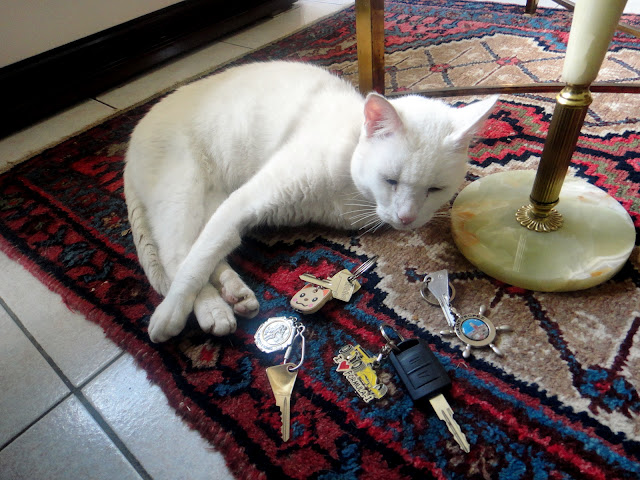 all lost keys I found in the house !


Where are my keys ?

I was always "in war" with two items my glasses and my keys, all keys ! Now since I don't wear glasses anymore one problem is solved, but the keys are still a problem.

I always put them on the same place to be sure that I find them when I need them, but unfortunately there is something mysterious going on in this house or in my bag, the places change !

There is not one day I am looking for the car keys when I am somewhere and get nervous because I fear that I can't go home. Several times per week I turn my handbag over because I can't find the keys and then they drop out loudly from a little space in my purse !

To help me to prevent that two of my friends have given me for a birthday key holders, which a normal person would find immediately, but even that doesn't work sometimes, but it is already better, especially the one with the fur ball on ! 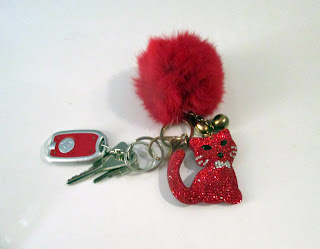 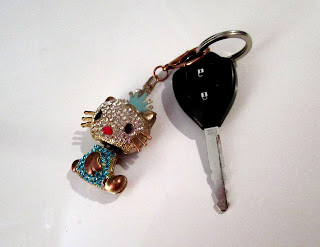 But honestly it happens with  all kind of things. Yesterday I filled in a bowl with fresh cat food, put it somewhere because I was interrupted and I haven't found it yet so far !

When we still had the little mobile phones it was a catastrophe because I always forgot where I had left it ! To find it was rather easy, I just called myself, it rang and I found it. One I really lost because it rang once and then was dead, it was not loaded. Two years later we found it in a small place between the sofa cushions which you don't take off very often. Meanwhile I had bought a new one of course.

At Easter it is the use to search for hidden Easter eggs. In my house it is Easter the whole year long because I am always looking for something !

more participants here
and Image-in-ing
Posted by Gattina at 07:38 9 comments:

Every two years there is an orchid exhibition in the old "Moulin Banal" at Old Mill in a nearby located village "Braine le Chateau". I had never been there and took the opportunity to go and see the orchids. 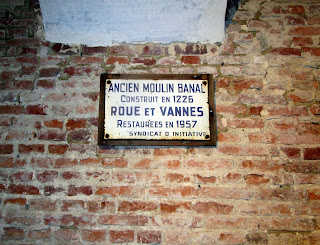 This water mill dates from 1226. It belonged in half to the lord and the chapter of Sainte-Waudru in Mons.

The peasants of Braine-le-Château and Haut-Ittre were obliged to come here and mill their grain, and paid a "banality" to the lord of the castle which still belongs to Count Cornet Ways Ruart, descendant of the family of the Counts of Robiano. The site has been classified since 1954 and the mill since 1970.

The mill as we know it today is made of arkoze stones or granite and local bricks. The buildings were remodelled and enlarged in the 18th century. This mill "worked" until 1947. 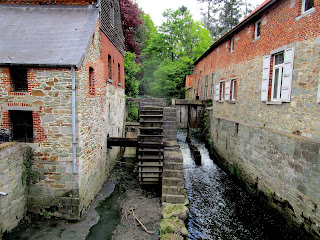 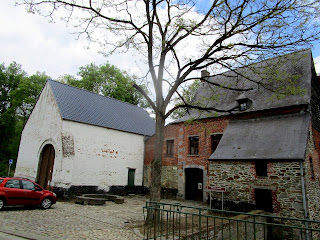 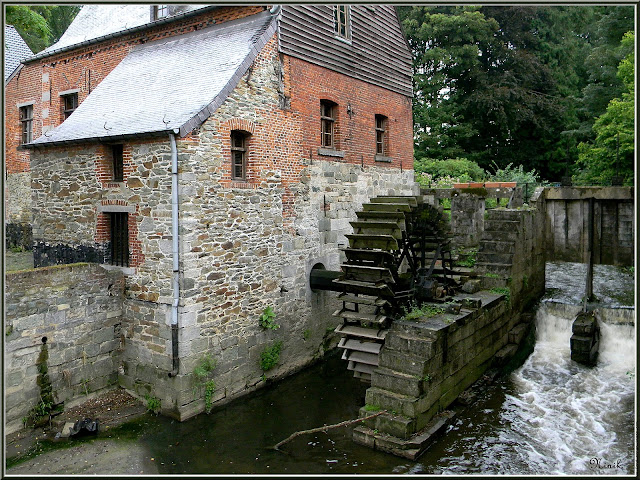 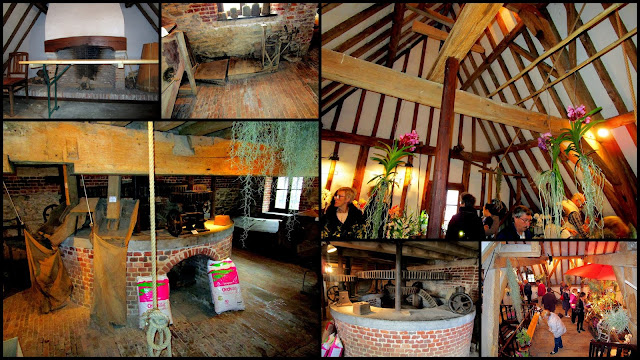 The mill  had three floors, with holes in it, but we didn't land on the first floor. The cord is not for hang up somebody but for the flour bags 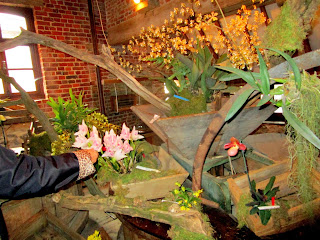 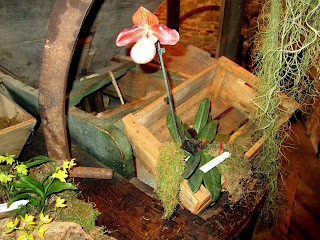 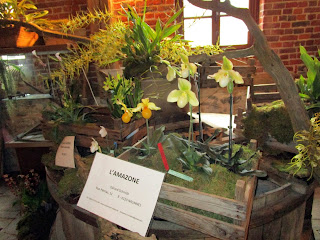 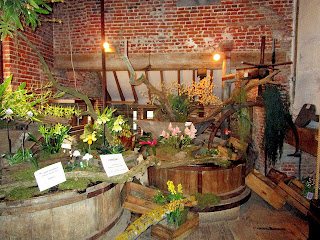 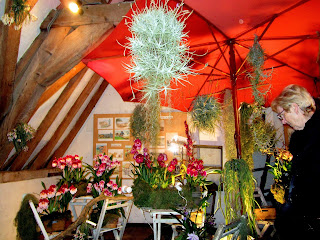 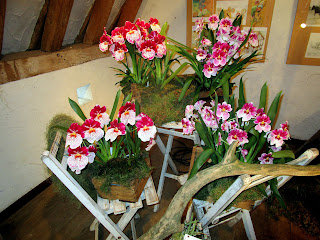 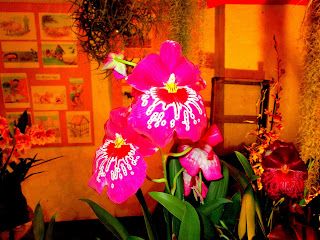 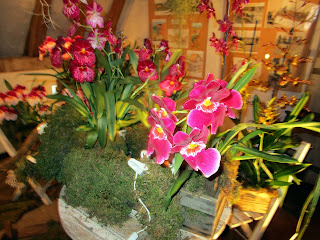 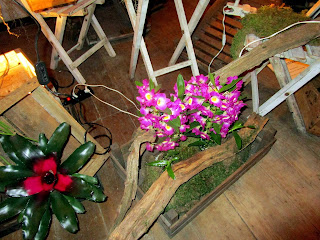 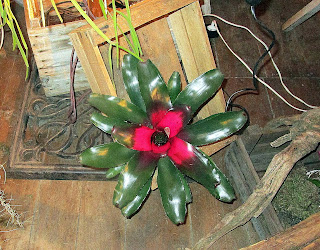 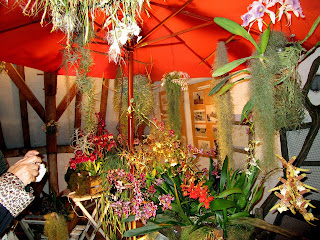 There is not much to say except that I had never seen an orchid like the last picture left !

It was really a very beautiful exhibition. Unfortunately the prices were also beautiful ! But people bought !

Saturday my neighbour, friend and nurse went with me to visit Mr. G. She was surprised that he looked so much better now ! 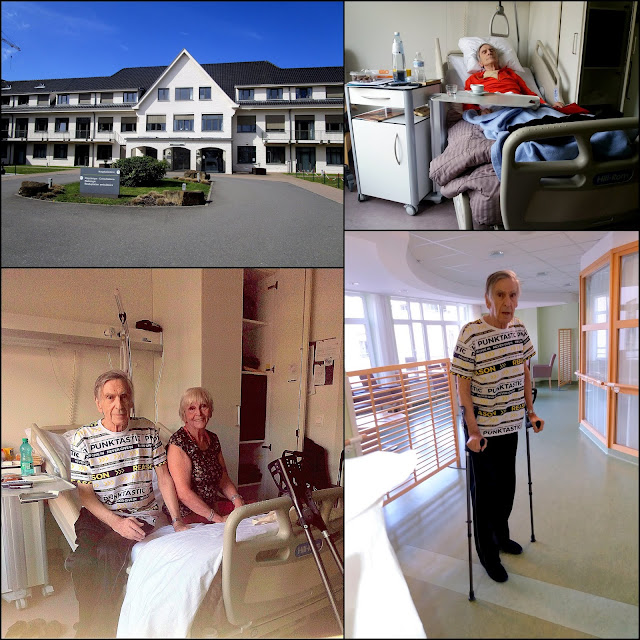 Between the first and the last picture there are exactly 6 weeks ! He can walk now with crutches and has to do his exercises each day.  Finally we spent a nice afternoon because all what I don't know about health service, hospitals, doctors, and how they work my friend knows and patiently explained everything to him. So I think he is feeling better and both of us "ordered" him to have the hairdresser come and cut and wash his hairs ! It was about 4.30 we had to return home, because there was a gardener expecting my neighbor.

The weather was quite good, but he is not yet allowed to go outside alone, only with a nurse. Maybe next time we can have a coffee in the nice restaurant of the clinic. Finally we can see the end of the dark tunnel !

On Sunday was Mother day and as my son lives in Amsterdam, I got a phone call and my friend Myriam's son had to call her secretly because his wife doesn't like her mother in law ! Sometimes there are real sad situations. She never sees her grandchildren either (7 and 9) because their mother has talked so badly about her, that they probably think she is a monster.

We tried to make the best out of the day, went to a restaurant where we had a delicious Tikki Marsala chicken followed with strawberry cream and coffee and went then to a nearby little village to see a orchid exposition in an old mill dated from 1226 !! 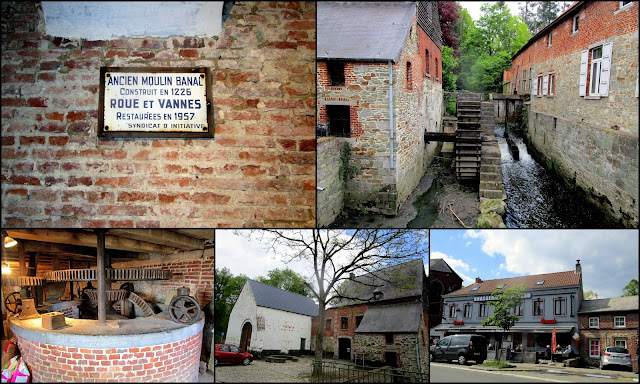 The mill is open for visitors only all two years, because as it is so old it is dangerous for the floor. Myriam was a bit worried because there were holes in the floor. The whole inside of the mill was decorated with beautiful orchids which I will show in a separate post. Besides the mill was a castle, but private and we couldn't get in, followed by the church and next to the church a Brasserie where you could have your beer after the mass. We didn't go into the church preferred the Brasserie which also was very old and as we could sit outside we enjoyed our drinks on the terrace.

So Mother Day passed by and when I dropped off Myriam at her home, she asked me to come in because she had a frog (a very fat one) in her swimming pool, and wanted me to help to get it out from the tube it was sitting in. I didn't want to see the poor frog, maybe he had found the way out alone and was now swimming in the pool, she had told me there are special tweezers to catch them and that they scream, although it doesn't hurt and once the frog caught he hops away. I preferred to go home to my cats !
Posted by Gattina at 21:45 9 comments: