I had never thought that at my young age of 75 I was asked to be a model for the tourist brochure of the Belgian province Brabant-Wallon. But it happened and I had an appointment with the fotographer
and the director (a young woman) at the La Hulpe castle.

Punctually at 10 am I was there and the other models arrived too. I thought that 10 am is not such a good choice as we look better in the afternoon, and not when we are just climbing out of the bed. 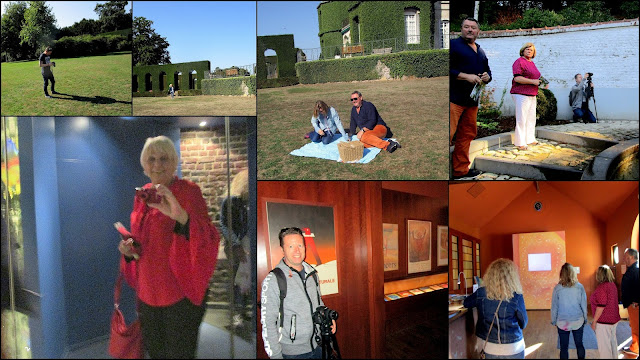 We had to walk around and pretend that we were tourists. We also had to visit the museum and show interest in the paintings, sculptures, and other creations of an Belgian artist named Folon. I was (nearly) ashamed not to know him ! But his permanent exhibition was quite interesting. We also admired his workshop. 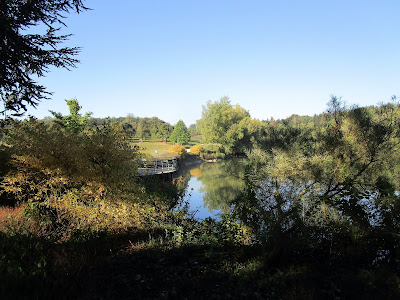 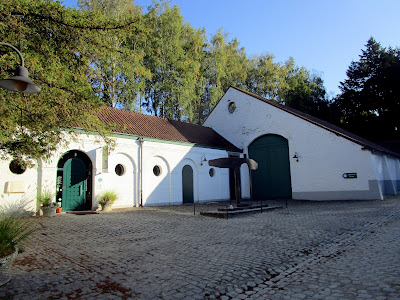 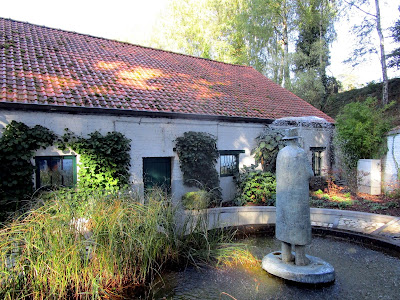 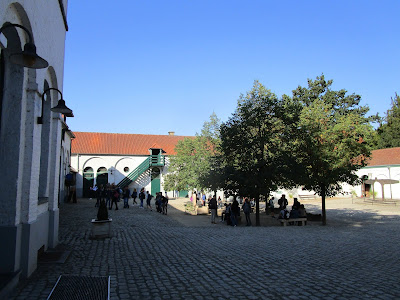 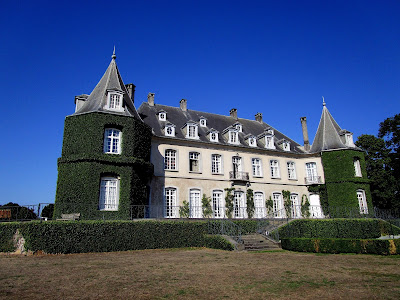 These were all the places were the photo shooting took place 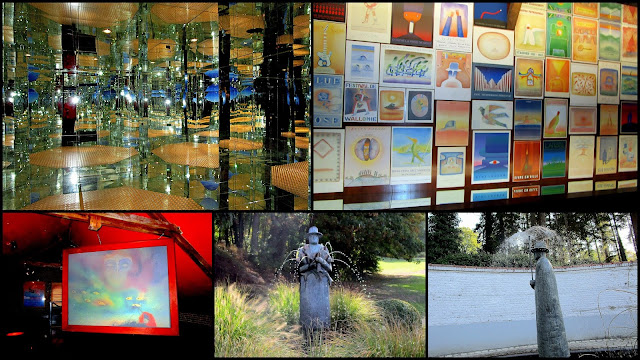 Some of his creations. A fisherman with a high hat, holding fishes which spat water, was one sculpture and the other showed the usual Belgian climate "Rain" There was also a mirror room, where I could admire myself from all sides ! 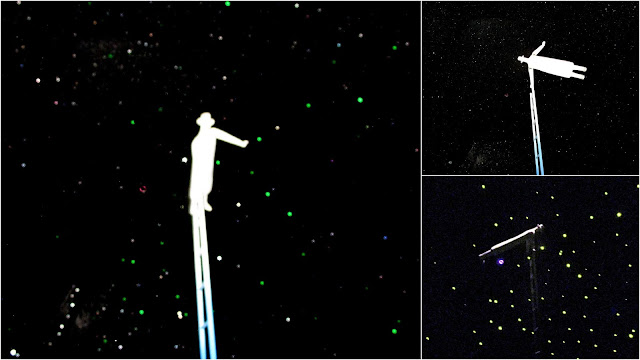 I wouldn't know where to put this creation in my house, it was a man climbing up a ladder and then when the door opened did some gymnastic. 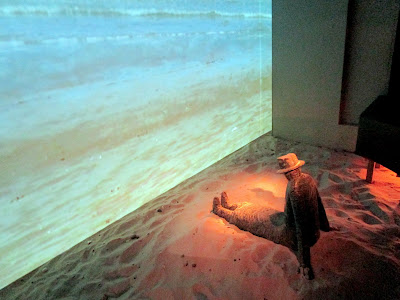 And this sculpture sat in real sand of the Belgian sea and was looking at a painting of the sea. I think I would need a bigger house for all that.

It was fun we all got very well together and after the shooting spent some time on the terrace of the restaurant there and we were offered a drink from the Tourist Federation !!

What a nice day, because it lasted until 2 pm and after that from all this walking around and posing I felt a bit exhausted. Yes, at 20 it was easier !!


Linking to Black and white weekend

and Weekend Reflections
Posted by Gattina at 07:00 12 comments:

Instead of playing "Sunday" on Monday and doing nothing I had a lot of computer work ! I had continued my travel posts this time on Hamburg in Germany. It's not so easy to remember and put the photos in place ! That took me the whole morning ! 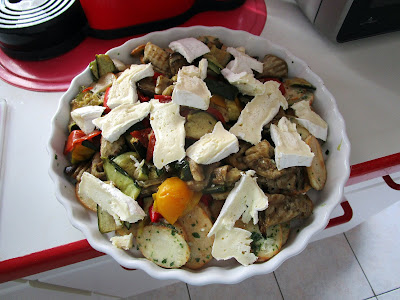 From my son's weekend visit I had a whole Camembert cheese left and invented a plate. A lay of  roasted potatoes, slices of eggplants, red and yellow pepper and zucchini. The Camembert came on the top and the whole thing in the micro wave. Quickly done and Mr. G. ate like a horse !

It was my turn to receive my Scrabble friends, we were only 4 but that was nice, one was on holidays and the other occupied with her gardener, I mean with garden work of course. 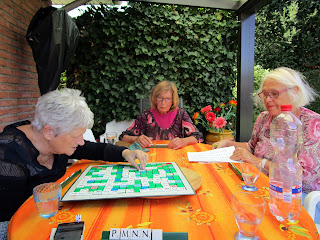 Mireille who is half blind won again !! And I lost (as usual)

I had got an email from my travel agency about our "girl's" holidays end November and went over to Nicole. 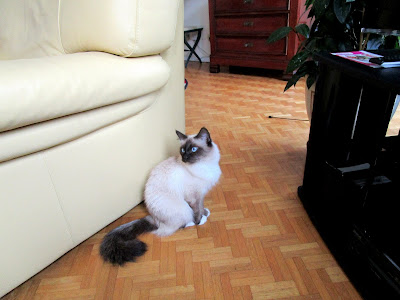 Her little cat cross eyed at me with her huge blue eyes, what a cutie she is. We discussed our holidays I had thought there was something wrong, but it wasn't !

Slowly we prepare our yearly exhibition of our painting class. I am in charge of taking photos of the pictures, put them together and create a poster ! 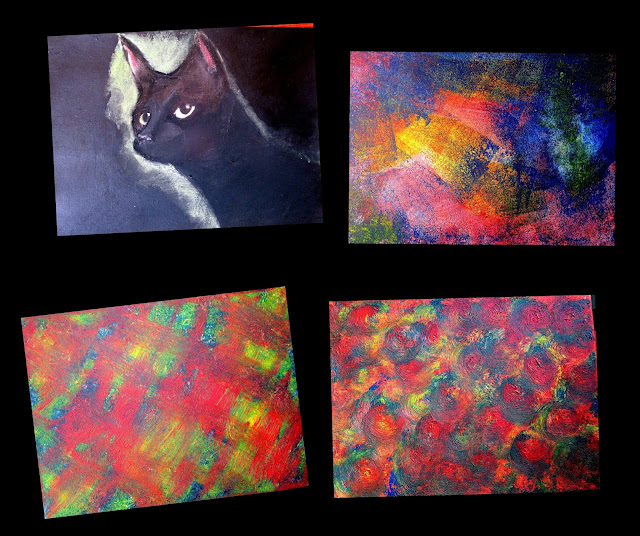 These 4 of mine, this year I have only painted a few cats, I started to paint abstract, with the help of a dishwasher brush and a sponge. 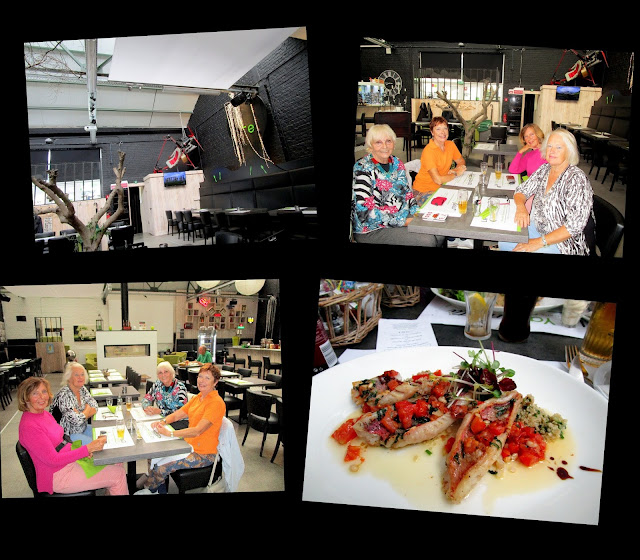 After painting class we were hungry and went together for lunch. I had fish in a special sauce was delicious. 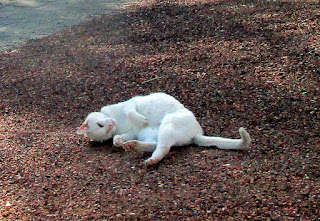 and rolls around to show me how happy he is that I am back ! What a welcome !

Babushkas seen in a souvenir shop in St. Petersburg

It took me nearly two days to put these 3 pictures on my blog ! Blogger apparently has a bug with downloading photos, and I needed the htlm code ! Finally I helped myself with Photobucket where I still had a very old account and which gave me the codes.

I had tried using Firefox, and Google Chrome, I tried with Mr. G.'s computer, I restarted the computer, I tried everything.

Before I died of a heart attack I finally gave up, but only for the afternoon because I had other things to do. And then by raking my brain Photobucket came into my mind and it worked !

Hopefully Blogger will repair this bug very quick preferably yesterday because it is very annoying when you need your photos on your blog !

Has anybody the same problem ?
Posted by Gattina at 02:41 10 comments:

It was terribly hot when we arrived in Hamburg ! 37° C (99 F) Apparently it had never been so hot in Hamburg since weather is recorded. Fortunately it wasn't sticky, because the town is surrounded with two rivers and lots of canals.

When we arrived in the afternoon in Hamburg our first stop was the St. Nikolai memorial. The former main church was destroyed during air raids in 1943. Today, the ruin is a place for remembering the victims of war and tyranny. The tower is still the highest church tower in the city. A glass-walled panorama lift travels up to an outlook platform at a height of 76 metres. There is a museum in the vaulted cellar which provides information about the destruction of Hamburg in the Second World War. I didn't take the lift. 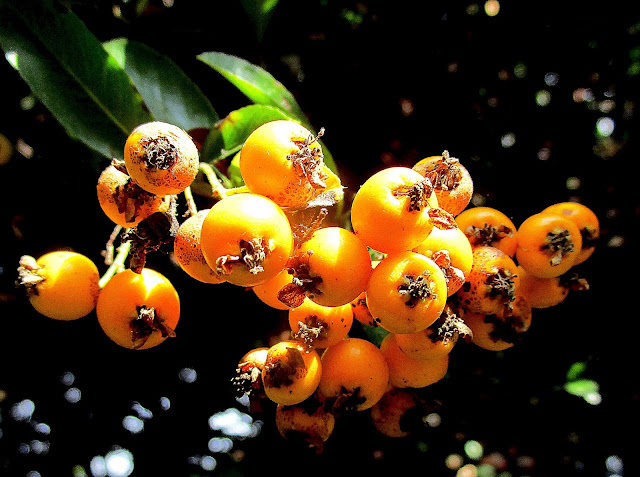 ******
This weekend we had visitors ! Son and grandson wanted to say hello, which is real nice, but the truth for their coming, was the birthday of my son's godchild. And as the 12 year old girl has a younger brother, the same age as Toby, of course they wanted to be together as much as possible. Because not only the fathers are best friends since school years but also now their sons.

As it is more interesting to sleep with a little friend, and for the fathers there is no limit to enjoy some  wine without paying attention to the quantity because they don't have to drive they spend the night there.  ! And for Toby it's also far more interesting to play with his friend then staying with old Grandma and Grandpa. At his age I would have done the same.

So we enjoyed a short visit, but better that than nothing. They arrived past 1 pm and I got a 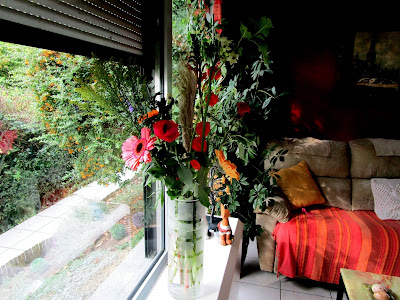 Before we started lunch, Toby had a look at what I had made for him to remember a "fond of travelling" grandma. 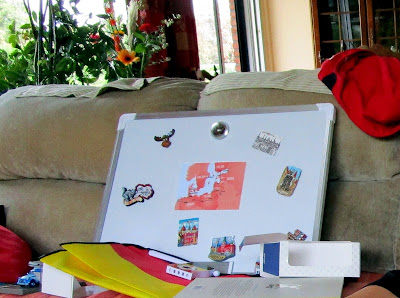 During my travel through the northern countries I had bought a magnet of each city, except Amsterdam, there I didn't have this idea yet. When I was home again I found in a shop a framed piece of metal. I put my itinerary in the middle. The magnets were all in a plastic bag and he took them all out and placed them there were they should be. For his 7 1/2 years I was really amazed that he was so interested to which countries the cities belonged. I was happy that he liked my idea.

After lunch, he played foot. Nobody ever has played football (soccer) in my or Mr. G's family. 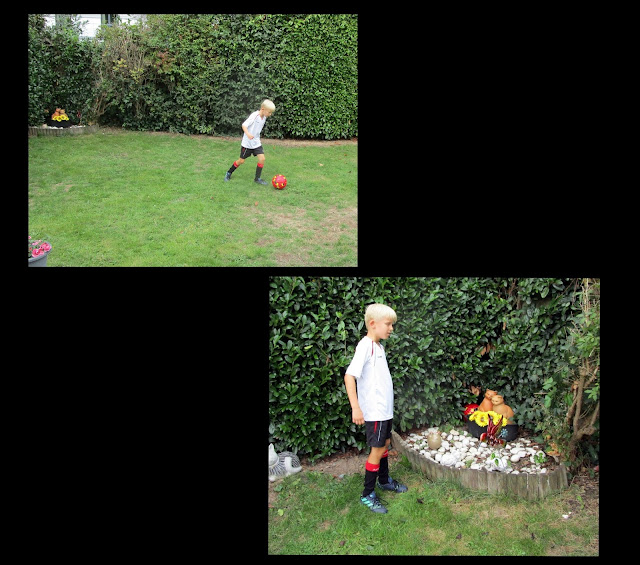 but Toby has become a real football fan and also plays in a club in Amsterdam. Here he was a bit upset because the ball had landed in our animal cemetary, but I told him that the cats, one dog, a hedgehog and a guinea pig wouldn't mind that the ball had fallen on their head. 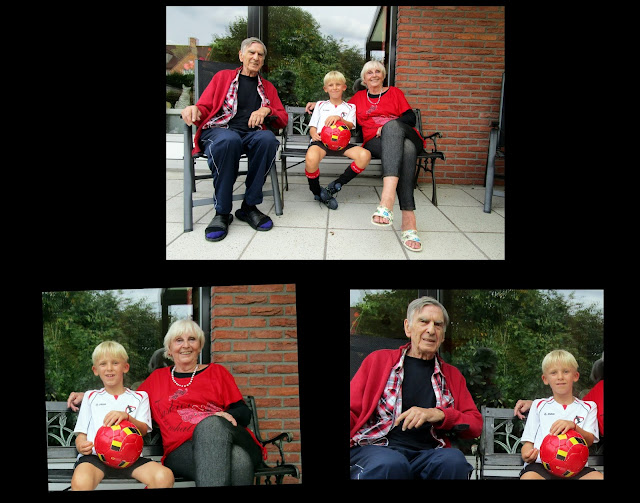 Then came a family picture session ! For once Mr. G. kept his eyes open and smiled which is really a miracle, usually on all photos he has his eyes closed, or when they are open he looks angry. This time both went well !!

Only too soon they had to leave for the birthday party and we were alone again. I had the blues a bit and for once Mr. G. agreed to go out and eat in a restaurant. Of course in a self service and very time limited. As soon as he had finished he wanted to go home. Which we did.

The next day, I went to my son's friends home, we wanted to go all together to the flea market in the nearby little town. Just as we had in Waterloo last week. Mr. G. was tired and remained home. 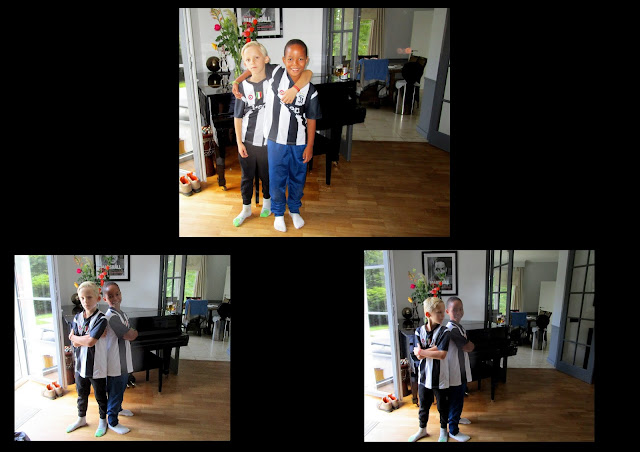 Aren't they cute in their football (soccer) outfit ? Although Benji is 6 month older then Toby they have the same size. Toby told me that he as to grow 14 cm (5.5 inches) to reach the same size as his mummy ! I found that very cute a little more and he will reach my size too ! 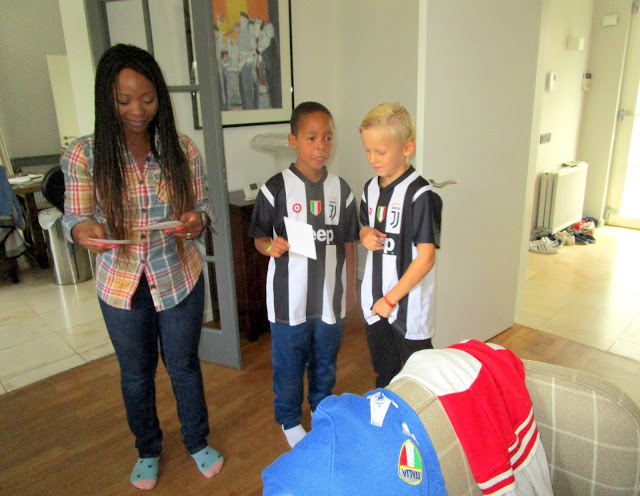 Then we all went to the flea market, (above is Benji's mom) whom I know since a very long time, still from when my son lived in London and his friend had fallen in love with her. 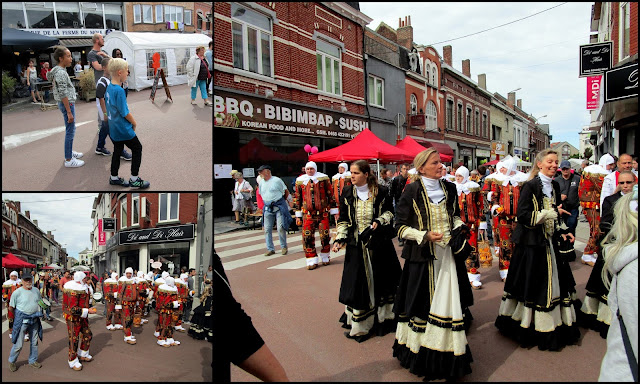 The boys had fun and looked at the "Gilles" in their costumes wearing clogs and stamping on the street which made quite some noise together with drums. 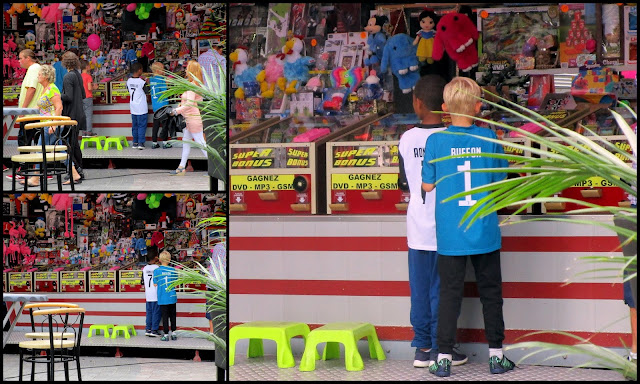 Then they tried to play a game. They bought two huge bags of popcorn, which they offered generously to us adults.

We were sitting on the terrace of a Brasserie and watched what was going on. 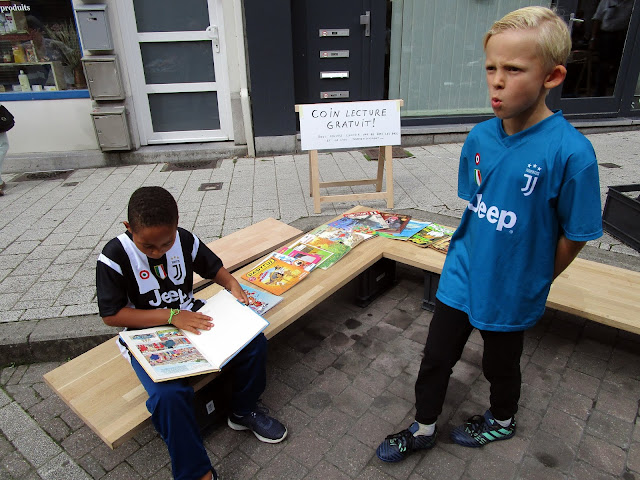 They found a reading corner, but Toby hasn't learned to read in French but he speaks it very well, his mothertongue is Dutch. 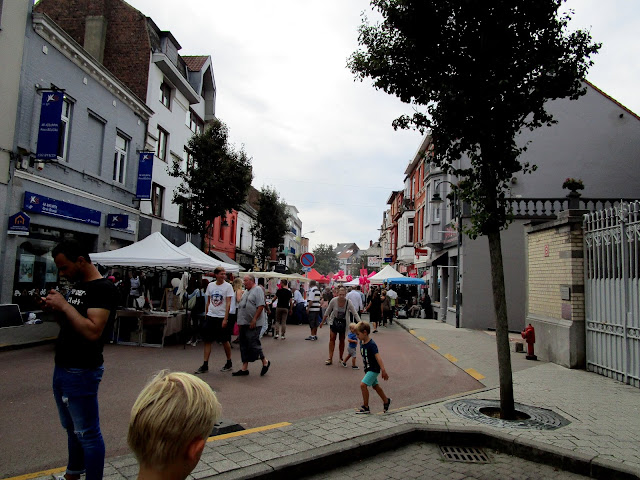 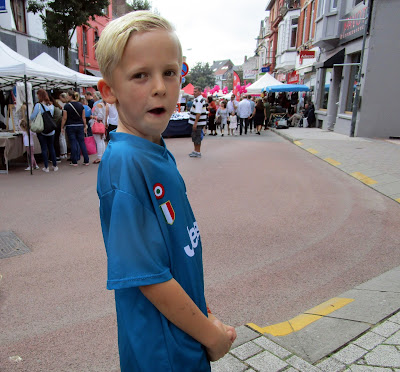 Only too soon we had to leave because both wanted to say good bye to Mr. G.

We chatted a bit and called a friend in Italy.  Then they left. It will probably not be before end October when I see them again.
Posted by Gattina at 05:22 8 comments: