1. After the rainy weekend, the week started with a wonderful sunshine and it was quite cold. I prefer that by far. After aqua gym I went with Dominique for lunch. So finally we could talk about all the changes which happens now in her life. Finally they won't get married (yet) but she will move in with him in his house. Her house just besides ours will be for rent. That's sad, because we had such a nice relationship and our kitchen windows are just opposite so we could greet each other in the mornings.

2. As I have started pastel painting I needed some carton and an eraser and some other things for my office. I also found a nice little suitcase on wheels to put all my stuff in. I was near Nicole's so I called her and as she was home I had a coffee with her and she showed me the new sun tent she wants to have installed for summer because on her terrace it is very hot.

3. Mr. G's young friend (he is only a little older then our son) had invited us into his new apartment. He just had moved in a month ago. He was very proud and had all reason to be, because it is very modern and light. The kitchen/living is open plan and he has a huge terrace around the house. He has installed a camera in his living so that he can see his entrance and living room with his smart phone ! Very nice ! I had heard about this from young parents who go out and check from time to time if their house is still standing when they have teenage children !

4. Our painting class was nice, we will have a wedding on Saturday, one of our vintage friends will get married after 30 year of living together with her boyfriend. We were all a little surprised because we thought they were already married. He is 20 years younger ! It should be normal, because nobody cares when a man of 70 marries a woman of 30 ! The only problem would be if he wanted to have children, but he never wanted one. So Saturday we will go to the City Hall and wave and throw rice on them. Apparently that brings luck !

5. I am busy with doing some research to buy a DashCam for my car. More and more people have this and apparently they are very satisfied especially in case of an accident. Has anybody an opinion about that ? Some people find it useless. I think it is nice to film the streets especially when the landscape is beautiful and you can keep this part of the recorded way.

When I arrived at Nicole's one day, there were at least 10 people standing on the street, all neighbors. The reason was that Nicole had got a phone call from her neighbor's daughter, because her mother didn't answer the phone which was very unusual because the old lady of 90 years has her exact daily schedule and as it was afternoon, she should be up, well dressed and combed as usual. She is never sick and even mows her lawn still at her age.  The daughter had also tried the mobile phone but also without success.

Nicole proposed to go over and rang at the door. Which she did. She even banged and then other neighbors arrived for help. They knocked on the windows went around the the house to look in the French doors of the living room. But there was no sign of Simone the old lady.

A man proposed to break into the entrance door or break a window to climb through. As they were still discussing what to do, the daughter arrived with the key. Everybody watched with attention as close as possible when the door was finally open. After a while a uncombed and without make-up, dressed in an old bathrobe Simone showed up and looked at all these people with surprise.
Then she explained that she had a light cold, had switched her phones off and had gone to bed with an aspirine. That was all !

She thanked us to have worried about her and said it was good to know that people took care of her. Of course we were all surprised and relieved that nothing worse had happened, as she was never sick, and never sleeps during the day. I think it's better to act like this then wait until the house or apartment starts to stink, which unfortunately sometimes happens.

We chatted a bit together and then everybody went home.

The only one who really had enjoyed the whole situation was dog Charlie ! Having all neighbors around him was heavenly, he likes company ! On top I had brought him a bone which made his day. 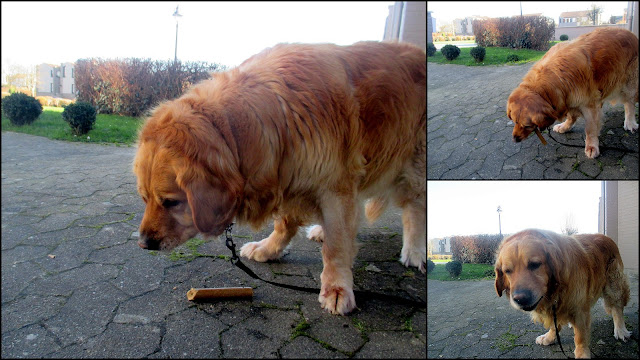 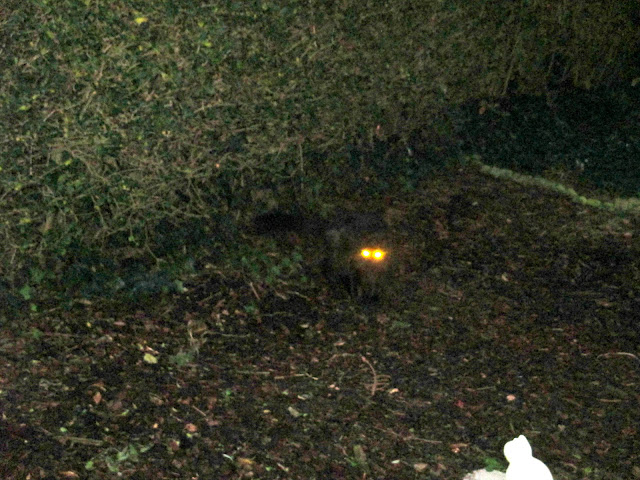 I had a drink in the Café "La Fleur en Papier Doré" which had been created in November 1944 in the center of Brussels below the Sablon, not far from the "Grand Place". Gerard van Bruaene, art dealer, Many artists like Hervé (Tintin) or René Magritte met here to draw .....

Besides the fact that it is difficult to write about a weekend where nothing special happened I can always talk about the weather, but even that is boring because each day it rains and rains and rains ! 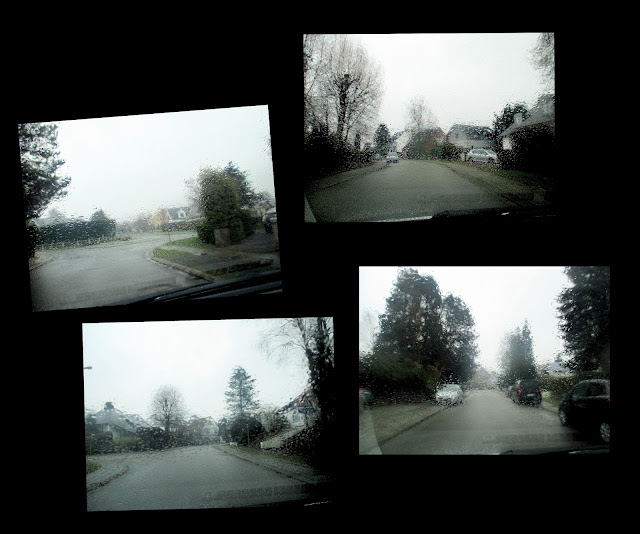 It is not very inviting to go outside for a walk when even sitting in the car it looks already depressing. This is our street since the last weeks !

On Saturday we wanted to go and see the Venice Carnival Parade in the heart of Brussels. Nicole arrived and together we drove to Ilona to pick her up. Instead of grey sky it started to rain more and more. We decided to eat something first in the hope the rain would stop and we could go and watch this beautiful parade. 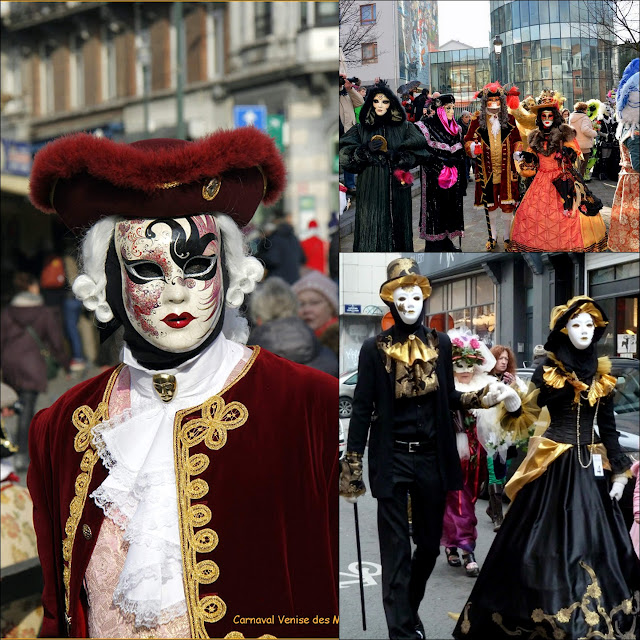 It should have looked like this, instead I had to "steal" the pictures from last year on internet and as we had our lunch at Ikea we spent the whole afternoon there instead. It would have been impossible to take pictures, and I even wonder if the parade hasn't been cancelled due to the rain. We thought we will go next year and Nicole took the opportunity to look for new kitchen furniture and I bought ... guess what .... an umbrella ! I had again lost one. I think I should open a special account for umbrella shopping !

Valentine's day was also "under water" I am sure the restaurants made good business. As Mr. G. prefers to eat at home, I bought Sushis and "Mousse au chocolat" as dessert. 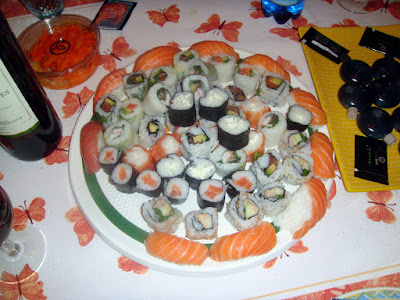 As usual Arthur tried to steal them and we had to put them in the cupboard !

We spent the whole afternoon with computer and TV and avoided to look outside !