It's already 2 years ago that our grandson Toby was born ! Today is his birthday and we will celebrate all together with his Dutch grandparents in Amsterdam. Toby is a mixture of Dutch, Italian and German origins ! A real little European ! 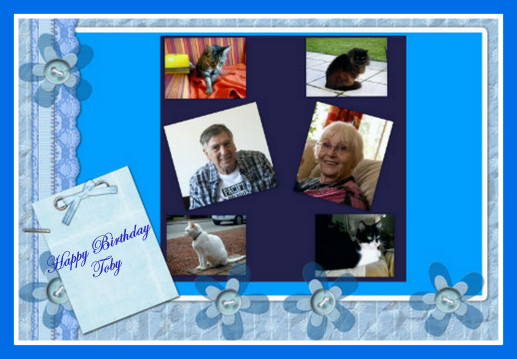 1. When I opened the stores and  only saw the whole neighborhood in grey, I thought this day is ideal to be creative, and produced Christmas headers for 3 Blogs  with only some interruptions of  long lasting telephone conversations with my friends. Mr. G. made a statement : "How can you stay so long on the phone" ? Men !  At least this is done, before I am off to the sunshine and heat in Egypt at the Red Sea end November  !

2. Christmas decorations are in the stores now and I did some "market studies" especially concerning a nice imitation of a real Christmas tree. This year we celebrate Christmas here in Waterloo for the first time with little Toby and of course I want to make Christmas the same as I used to do when my son was little. And a nice Christmas tree is very important. I stated that the prices had increased tremendously and they had become very expensive ! I didn't buy any, but Mr. G. and I turned the basement upside down to find the one we had always used and finally found it ! It looked as good as the new once in the stores, so we saved some money. Since years we use a fake one, especially because of the four darling cats !  It had been a very long time since we celebrated Christmas at home, because we always went to my son's in Amsterdam. I am so early this year with Christmas, because of my holidays, when I will be back there is not much time left and the best things are sold.

3. I also repaired some holes in the kitchen cabinets, where the painting had gone at the bottom. I used a special paste to fill in the holes and made the surface equal and then I glued silicone stripes all along the cabinet bottoms. To my big surprise, the result was very nice, because I had never done such a work ! Repairing things were Mr. G's job, but with some arthritis in his  hands he can't do it anymore and he also has become quiet stiff ! The result of his new life as couch potatoe !

4. As I have lost so much weight with my apple "cure",  two of my jeans although "stretch" had become too large at the waist. I can't sew, never learned or did it, but my best friends do ! Nicole, Dominique and Ilona are real good dressmakers, and Nicole immediately proposed to make them smaller when she saw that I had to pull them up all the time. So I brought her my jeans, and we spent the afternoon together. Later on her daughter came too and we had a nice afternoon.

5. In painting class I finished my last painting, the theme was "transparency"

Not this, but next weekend we will have our yearly exposition.

After class I went together with a friend I hadn't seen since a few months to "my" Asian Restaurant. This time I took some pictures of the entrance. Behind the Buddha is a little terrace with seats and tables for smoking people while they have their apperitif before they start their lunch or supper.

I also exercised to make personal Christmas and Birthday cards with a new program I had downloaded. I like to create cards or headers and I was quiet happy with my first results.
Posted by Gattina at 06:00 11 comments:

THE ORIGIN OF "Z"

Thanks to Alphabet Thursday my general knowledge was enlarged tremendously ! And if you read this post, yours will be too !!

I knew that Z (named zed) is the twenty-sixth and final letter of the (ISO ???) basic Latin alphabet. What I didn't know was the abreviation ISO.  Madame Wikipedia knew of course ! It's the abreviation from International Organization for Standardization ! I feel already less stupid.

Continuing my investigations I also learned that Z is a Semitic symbol and was the seventh letter, named zayin which possibly meant "weapon". Now I had another problem what is "Semetic" ? Madame Wikipedia explained "In linguistics and ethnology, Semitic (from the Biblical "Shem", Hebrew: שם‎, translated as "name", Arabic: ساميّ‎)! Fortunately Blogger accepts Hebrew and Arabic writing ! What I couldn't find out was if the Z semitic symbol was at the end of a seven letter long alphabet, but I don't think this will cause me sleepless nights. For a chatterbox like me I only find it a little short.

In the 1st century BC, Z was introduced again at the end of the Latin alphabet to accurately represent the sound of the Greek zeta. The letter Z appeared only in Greek words, and is the only letter besides Y that the Romans took directly from Greek ! It was certainly not used very often if it was only used in Greek words, as more people spoke latin or latin dialects, which are called today French, Italian, Spanish, and Portuguese. I too find it rather difficult to find nice words starting with a Z, which is the reason for this post.

In earlier times, the English alphabet used by children terminated not with Z but with & ! Now I wonder how & became the symbol of "and" ??? like Jones  & Co ?

It's also an enigma to me why Z meant "weapon" in a semetic alphabet, and became the symbol for sleeping people or animals in the latin alphabet ? 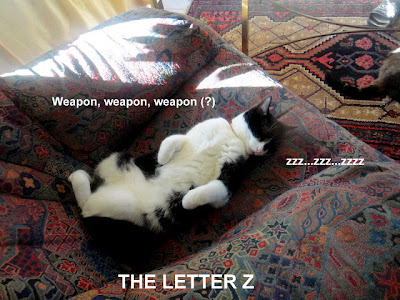 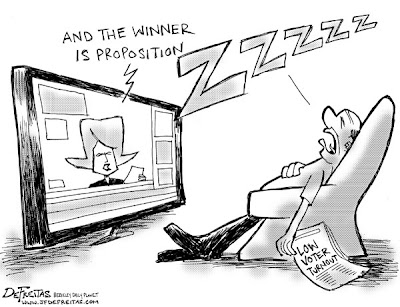 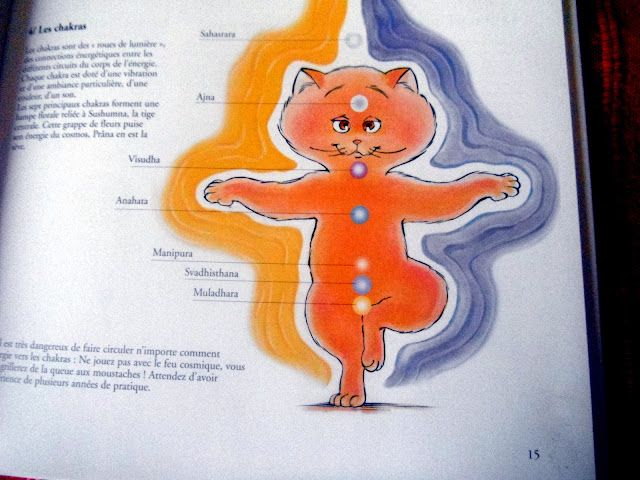 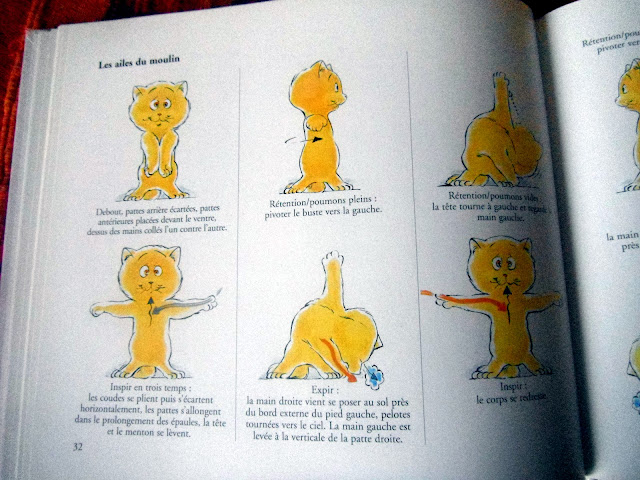 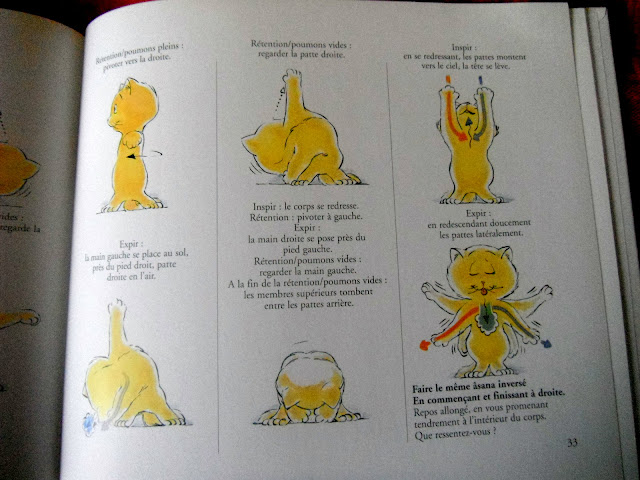 OUR WORLD - November in Waterloo

Before you start to read this post, please take an umbrella or put on a raincoat ! My part of our world is rather wet ! Or it's humid and grey or it's raining and grey. The temperatures are not normal for the season, one day we have over 10°C (50 F) and the other 3°C (37F) it's a real rollercoaster. 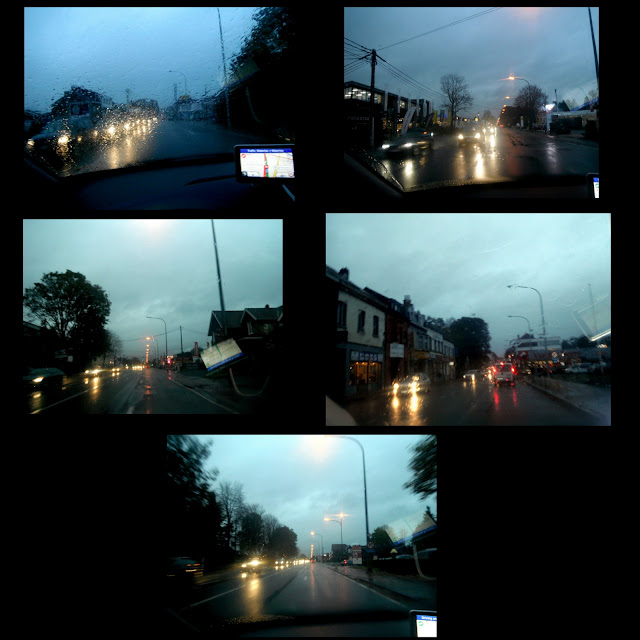 You have to drive mostly with you headlights. 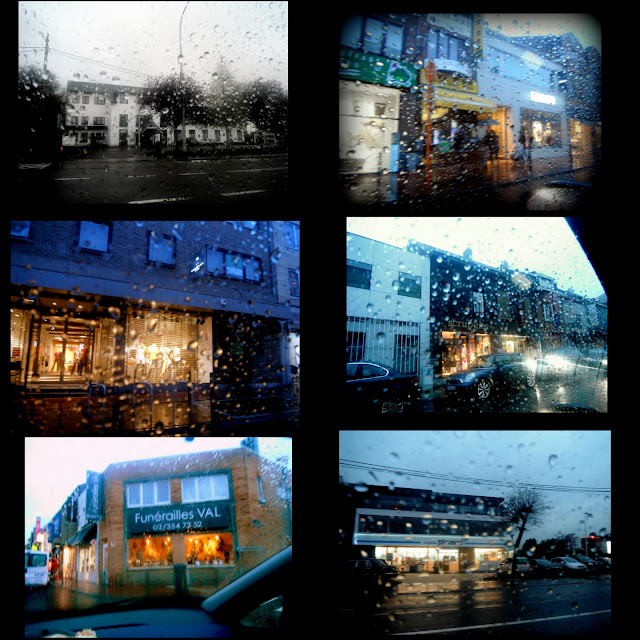 Daylight saving or not, there is no light to save ! 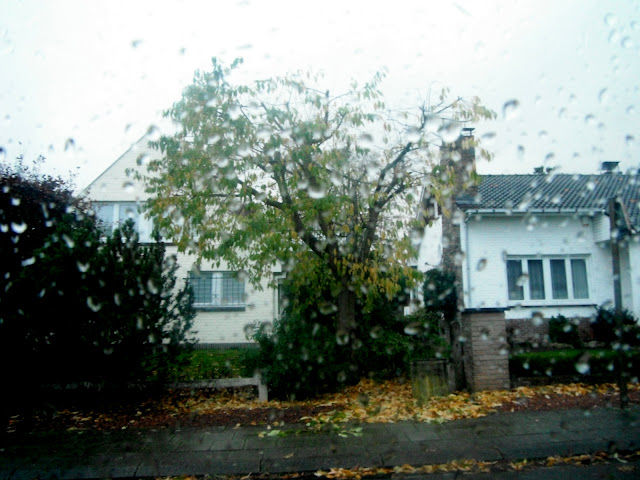 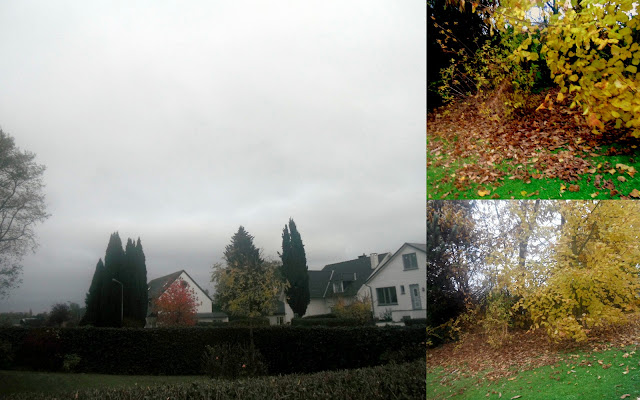 Even when it's a little lighter, there is always like a light mist in the air. And of course mountains of dead leaves in the gardens. 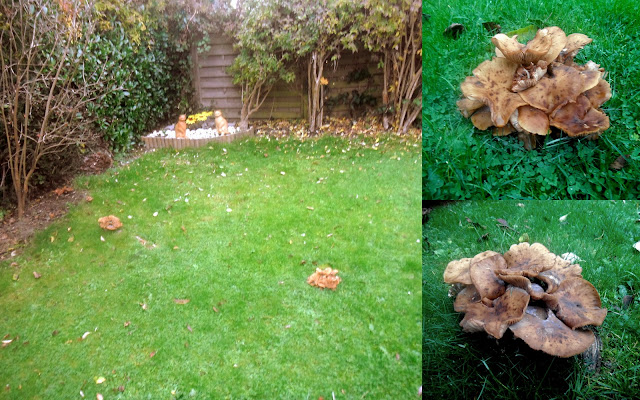 For the first time since we live here which means 37 years, we have strange plants in our garden. When I looked out of the window I saw these two big brown spots and first thought it was leaves. But from near it turned out there were big mashrooms, which I had never seen in my life. They rather look disgusting. 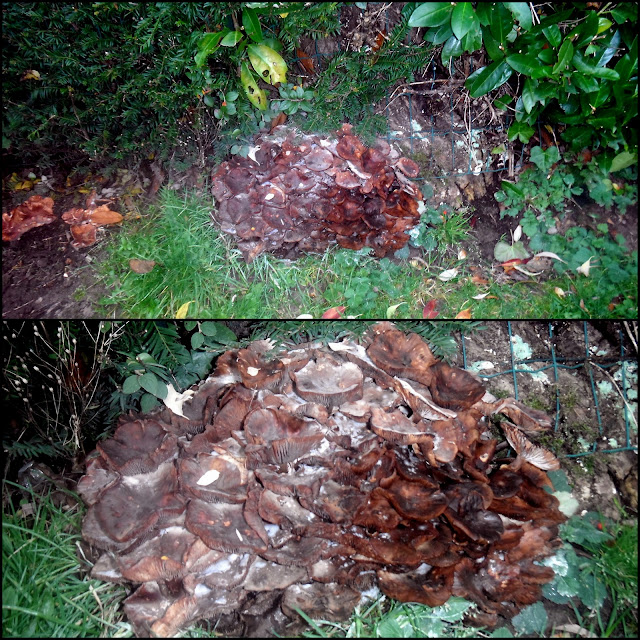 and even more on the rest of  the trunk of our weeping willow, a mushroom which rather looks like an enormous ulcer. It is so loathsome that I couldn't scratch it off  I hope it goes away from alone !

I wonder what other surprises are to expect this year !

Helps you to remember what you have done on the weekend of November 3. If you participate please put the little logo on the top of your post and leave your link.


On Saturday it was again cold and rainy, and what else could I do as some tongue exercises  ! 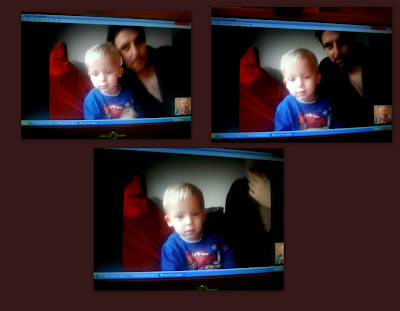 I started Saturday morning with Toby on Skype. He was in excellent mood and laughed and pointed on the screen, when I showed him a struggling Rosie who didn' tappreciate at all to be lifted up and look on a screen !

Nicole was without car, and was stuck home, so I just put my coat over my sweat suit and drove over to her. She lives in a beautiful appartment, which from outside looks like a attached house. 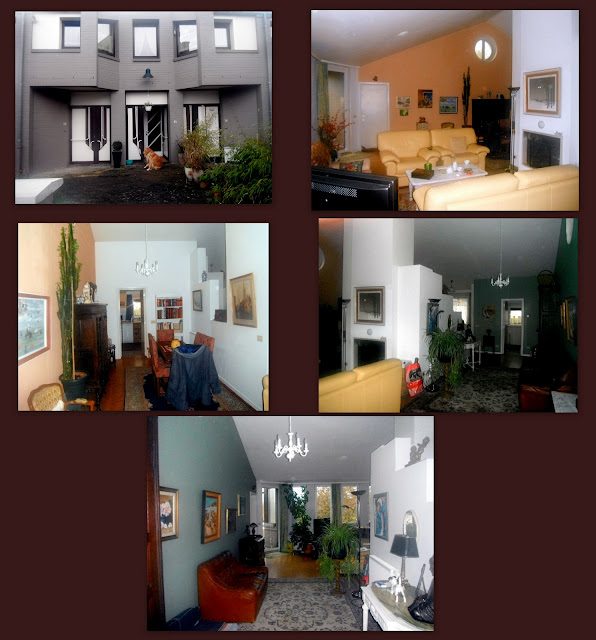 Dog Charly expected me already and brought me his ball. The entrance is on the first floor and then you have steps leading to the second floor. These are pictures of her living room combined with dining room and behind the kitchen. Her daughter and a friend came later so the time flew buy and I quickly hurried home to prepare supper ! Mr. G. is a very patient man, but he doesn't like an empty stomac.

After supper there was an evening reception in the C & A store where we got a drink and some little toasts, of course I had no appetite anymore, but it was nice to walk around and look at the clothes, and they offered 15%. 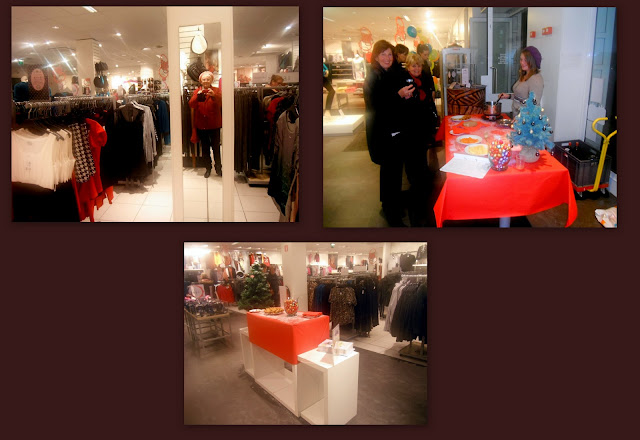 I only bought a warm berret for me and a little pajama for Toby. 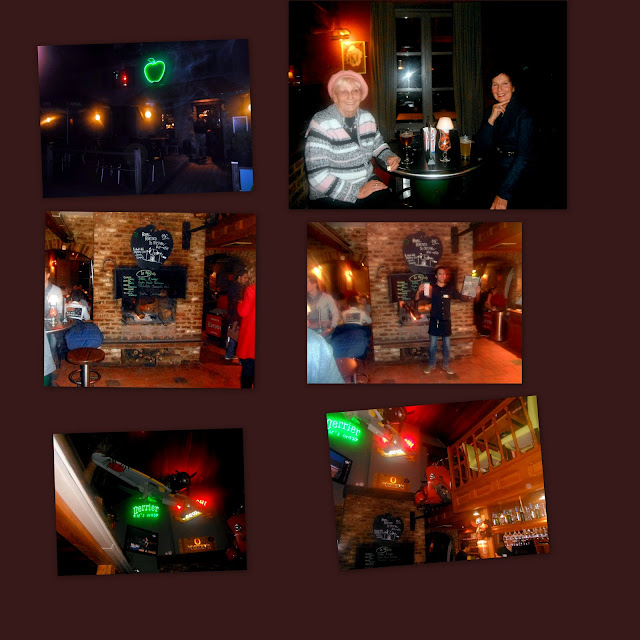 As it was quiet early, we decided to go to "La Pomme" (The Apple) a kind of Pub, where we had a drink before we went home. 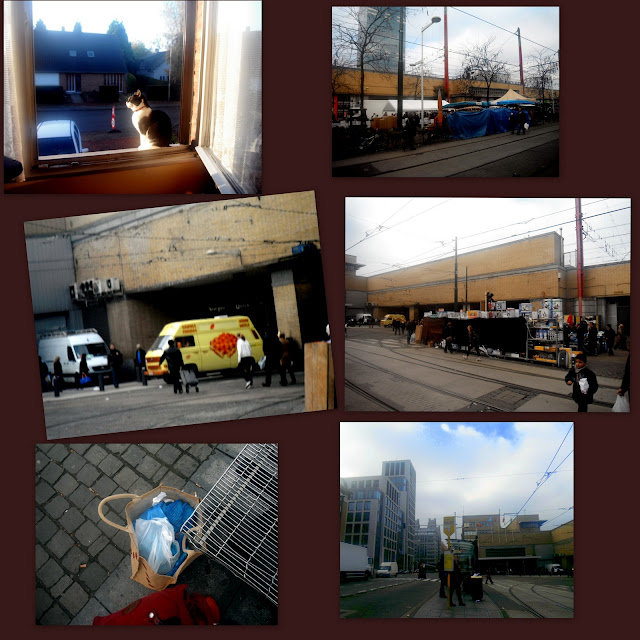 Sunday morning the sun was shining, Rosie could even take a sunbath. I went to the Midi market to meet my cigarette supplier, bought some fruits and a cardigan for me, before I took the bus home while the clouds covered the sky and it started raining again.

The afternoon Nicole and I went to Ilona's where in front of a nice fire in the oven, we had a cup of tea and continued tongue gymnastic chatting. Mr. G. wondered if we still had subjects to discuss and we had !

After supper Mr. G. and I watched an Inspector Barnaby in Midsomer,  who solved as usual several murders with elegance.
Posted by Gattina at 06:00 6 comments:

Labels: Brussels, flat, What did you do this weekend ? shopping
Newer Posts Older Posts Home
Subscribe to: Posts (Atom)