1. During aqua gym while we were hopping around in the pool, we complained that more and more things are falling into pieces or are not working anymore. So we had no light in one shower, the ventilation had broken down, the shower tube had a hole etc. But the worst thing was the banister at the pool, and what had to happen happened, when the first one wanted to get out of the water it broke and she fell back and the thing dropped with a loud bang on the tiles. The poor "girl" got a shock, and we had some difficulties to get her out with only one handrail still standing as she was rather round and heavy and stiff like a broom. Finally we managed pulling and pushing which caused a lot of laughter !

2. I had to drive Mr. G. to a specialized hospital for a pet scan. He had lost a lot of weight and his doctor wanted to have him checked to see if there was something wrong. I dropped him off and left, as the whole procedure lasted more than 2 h.

3. As I was not far from Brussels' most posh area, the Ave. Louise, I thought I will go there, I hadn't been there since at least 30 years ! 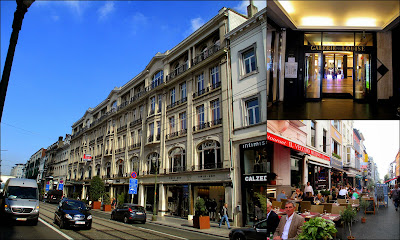 Except the Gallery I didn't recognize anything. The whole area had changed. There were now pedestrian areas and little streets with one restaurant besides the other ! It was packed with people and as it was so warm, they all had their lunch outside. I had two wraps there, walked a little around and then returned to pick up Mr. G.

4. My son with wife and grandson was on his way back home from Southern France, where they had spent a week of holidays. He called and told us that he would stop to say hello. 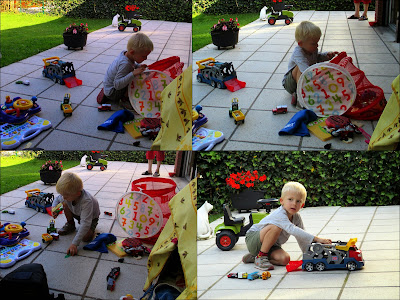 Toby's first action was asking for his toys which were in our guest room. Mr. G. helped him to carry up the box. Of course when you haven't seen something for a long time it looks like new. So he was very busy to play with all the little cars and airplanes. 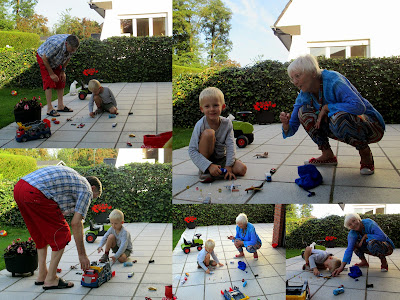 Nonno and Nonna played a bit too !

Finally they decided to stay for supper. Fortunately I had pizzas and a plate of pasta for Toby in the freezer ! It was so unusually warm for mid-September that we could sit outside until they left for Amsterdam around 7 pm. I hadn't seen Toby since July and he had changed again. He had grown and speaks a lot in Dutch, which we have difficulties to understand, but he also makes an effort to say some words in French. Besides speaking French with his father, i.e the father speaks and the son replies in Dutch, he hasn't much opportunity to learn speaking French. 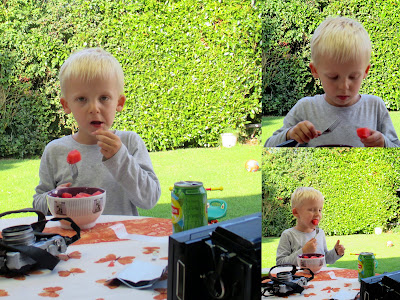 But language is not a barrier or at least shouldn't be, and he ate his watermelon with pleasure !

5. We have our new teacher in my painting class, I know her very well, she was in our class 2 years ago. She is actually very good and suits us perfectly. 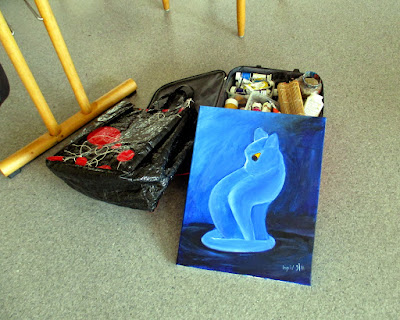 I finished my last painting and have to look for inspiration for a new one !

Mr. G. got the results of his pet scan and was pleased that he has nothing !

more participants at Susanne at Living to tell the Story.
Posted by Gattina at 06:30 16 comments:

WALKING THROUGH THE RED LIGHT DISTRICT

In 1978 I was working near Brussels North Station. Every day I drove with my car to the Waterloo station from where I took the train to Brussels North. It was a very easy commute. My office was just one street farer then Red Light District just at the exit. They were usually always at the stations, but since the areas around the main stations have all been changed completely, I have no idea where they are now. Maybe Google knows.

Coming out of the station I had to go through a street in which was one window after the other, side by side, nicely decorated with red neon frames and inviting signs, not for me but for men.

The girls usually sat on red velvet chairs had a little table besides them and were busy with knitting or stitching. When I went by I could immediately see if a girl was "working" because then the wool and knitting needles or the stitching work was laying on the table and the chair was empty. After a few weeks I got so used to them and they to me that they always waved to me to say hello and I waved back with a big smile ! They worked ... I went to work although it was another kind of work, I mean mine.

It was a special atmosphere in this street, old women armed with buckets and brushes cleaned the sidewalks and steps and chatted together in this very special Brussels' dialect which unfortunately is disappearing. It wasn't dangerous at all, it was rather more folklore and friendly. Prostitution is officially allowed in Belgium if the woman does it on her free will, only pimping is punishable. Of course it has to be discrete and in special areas.

I was quite surprised how many men were already clients so early in the morning ! My work started at 9 am. One girl told me that from 7 until 9 are the best hours ! When I saw the clientele walking along the street, I thought the poor girls, what a rough work, there were no George Clooneys or Brad Pitts amongst them ! They also avoided any eye contact and head down, walked quickly to their destination.

With the time I was so used to go through that street that I found everything normal ! Suddenly I had another view on these girls. Some of them were excellent mothers and showed me pictures of their children, they did this job to offer them a good life.

Today this street and its houses don't exist anymore. The whole area around the North Station had been demolished and a business center was built which is called "Little Manhatten". 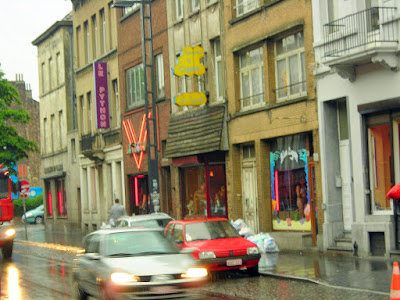 I found a picture of this street on Internet, which must have been taken at that time. Today I probably wouldn't walk so innocently through these streets ! Times have changed ! 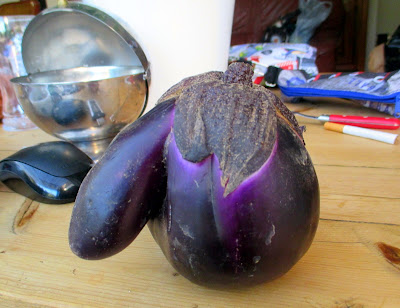 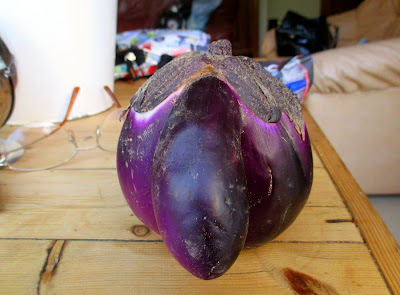 There was a horse festival in Braine l'Alleud, a little town near Brussels. It takes place each year, but I have never been there, it's only a few years ago that I am not afraid of horses anymore ! 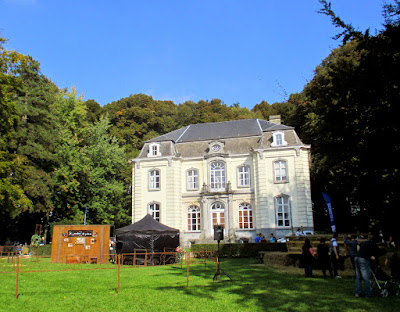 Around the Chateau Cheneau, was the festival. I think "Chateau" which means castle is a big word for this more like a manor looking building. It had been built by a apparently rather wealthy notary and was sold in 1978 to the Braine l'Alleud city.

The entrance to the park

Because of the beautiful weather 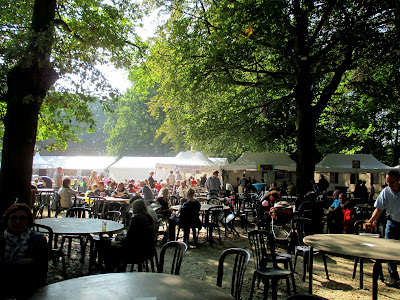 there were a lot of people 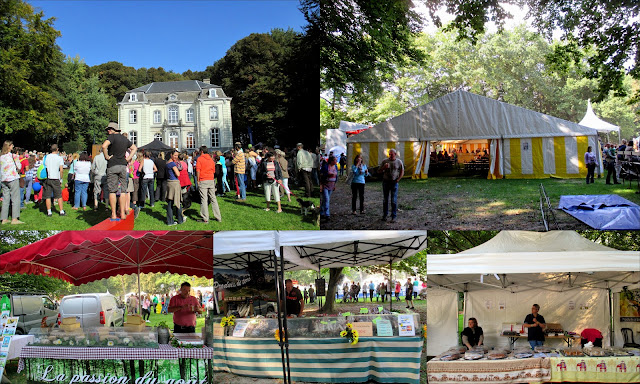 The yellow beer tent was already full and there were also several food stands, cheese,  sausages and cakes . 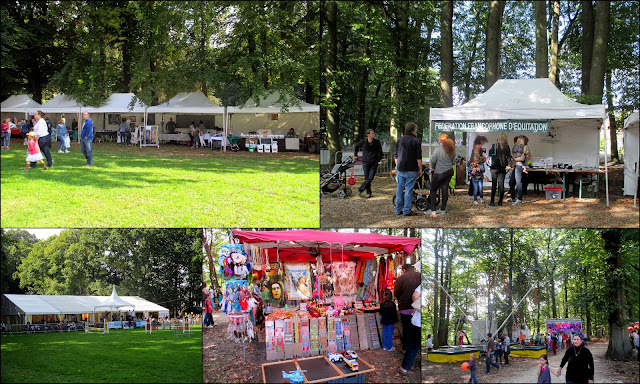 Many stands also represented animal shelters collecting money and of course there was a playground for children. 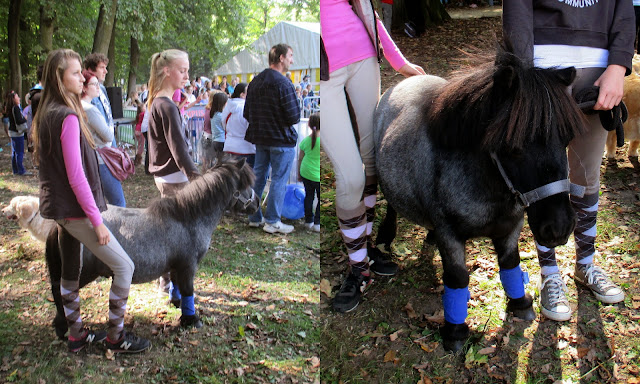 When I noticed this cute mini horse, I first thought it was a huge dog ! Probably it had been the "horse" of the girls when they were little. 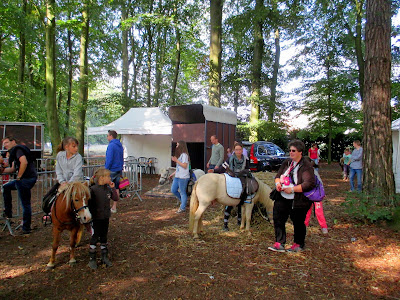 Small children could ride on small horses and had a lot of fun.

Later on was a show with riders in different costumes.

The horses were all very beautiful 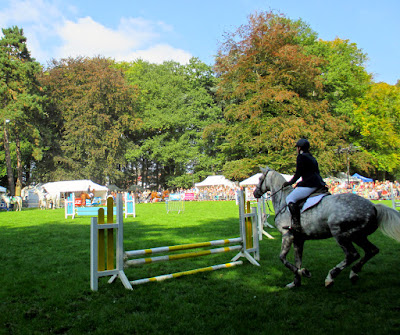 This one should jump, but refused in the last minute 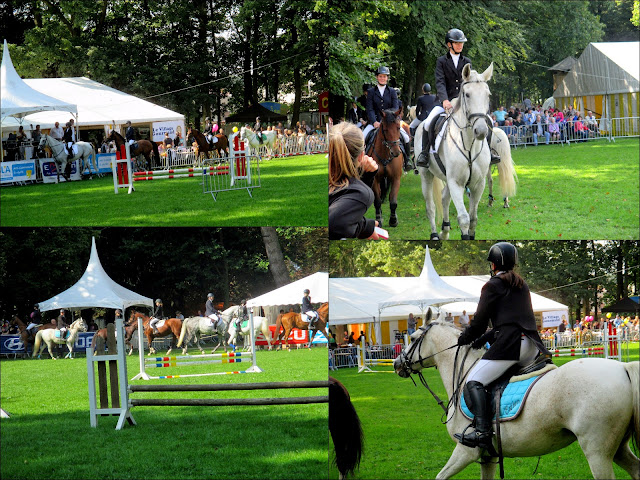 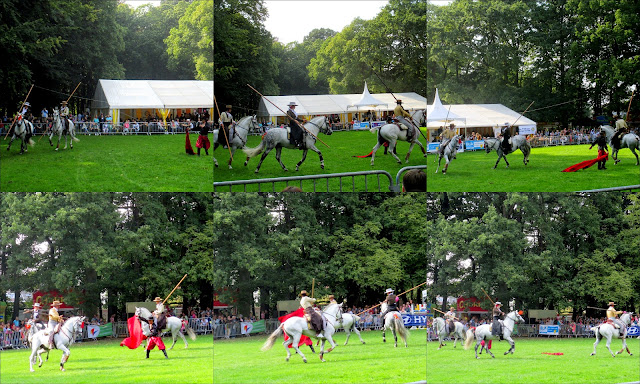 I watched the different shows, the riders on the white horses faked a "bull fighting".

After the shows I left and went home.

MY WEEKEND OF SEPTEMBER 13

I had been 4 times at the midi market to find my cigarette dealer salesman, especially for Mr. G who that's for sure will never give up ! Health or not health. Of course he didn't show up. That never happened so far, but he had told me that he would go back to Africa for holidays. Maybe he stayed there. The English couple I often meet on the market told me that I should try the market of Anderlecht, a Brussels municipality. I had heard of this market, which is hold in the ancient abattoir of Brussels. I had never put my feet there because there were horses, donkeys, cats and dogs on sale often in very bad shape. I feared I would make a scandal. But since several years the sale of animals on markets is not allowed anymore and I they had told me that the market was now very nice and family friendly.

And indeed it was ! To my surprise I even found a parking space nearly at the entrance of the hall. Everything was sold there, just like at the midi market and as I had my caddie with me I bought kilos of  apples, peaches and grapes for less than half price I would have paid in Waterloo !  But first I had to take some money in the "hole of the wall" as say they in England, an expression I really love, sounds much better than a cash point.

Then I intended to look for cigarettes. I had no time to put the money in my wallet when a young guy asked me if I wanted cigarettes ! I was so surprised I thought I had to look for a cigarette seller like a needle in a heystack ! I bought my cigarettes and made a few steps when another guy asked "cigarettes" ? and it went on and on at least 5 men stopped me for that ! It would take a whole army of policemen to arrest them all. So they close their eyes, I even haven't seen any. No wonder that people go there to buy their cigarettes for half price and probable the police too !

It was a beautiful sunny day and I walked around and took pictures. This market and its history is so interesting that I will write a special post about it.

This weekend lots of festivities in and around Brussels took place ! I went with Ilona to the nearest one in the next little town where a horse festival took place.

We had a drink with people Ilona knew (picture left below) and I watched the shows and walked around the stalls. Mostly food and animal shelters stands, collecting money for abandoned cats and dogs. Ilona's friends had a stand there for the rescue of mistreated Spanish racing Greyhounds. These dogs arrive in Belgium half dead, are treated and then they try to find a good home for them. It is a real shame that there are no laws or very poor once in Spain for animal protection. (remember the bull fights). If there was no pressure from the other European countries it still would go on.

After having walked around the park I returned home, while Ilona preferred to stay a little longer.

Unfortunately when the sun is shining the weeds grow too and I had the unpleasant duty to pull them out, but not for very long I quickly got fed up and throw chlorid and salt over the gravel, which usually is very efficient and makes them disappear. Anyway autumn is near and I have to pull out all flowers and plants of the pots and by then the weeds are probably gone.  Gardening is really not my favorite occupation !