This week of course was full of events which I can't even number so my Favourite 5 will be from
one to five in two parts !

On Monday we expected our son with family who arrived from Amsterdam around 1 pm. Father Christmas was hidden in the trunk of their car with lots of gifts and while they emptied the car  2 year old Toby immediately had recognized that he was in Nonno's and Nonna's house. 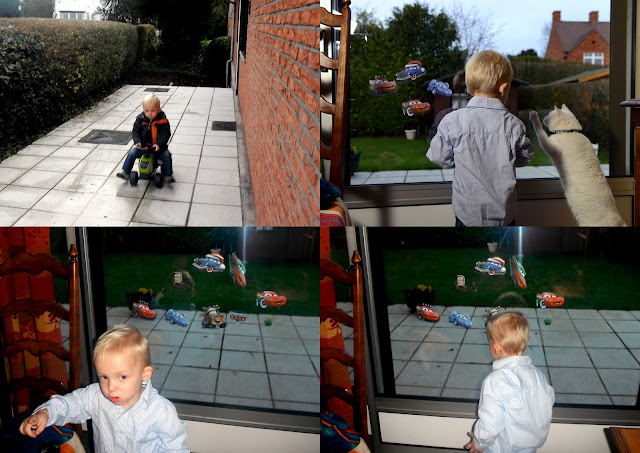 First thing he wanted was to make his rounds on the terrace, followed by cat Arthur, who, strangly loves toddlers ! Toby decorated our French windows with little "cars" stickers assisted by Arthur. After a brunch he had his afternoon nap, while we all four played Father Christmas and put the gifts under the Christmas tree. 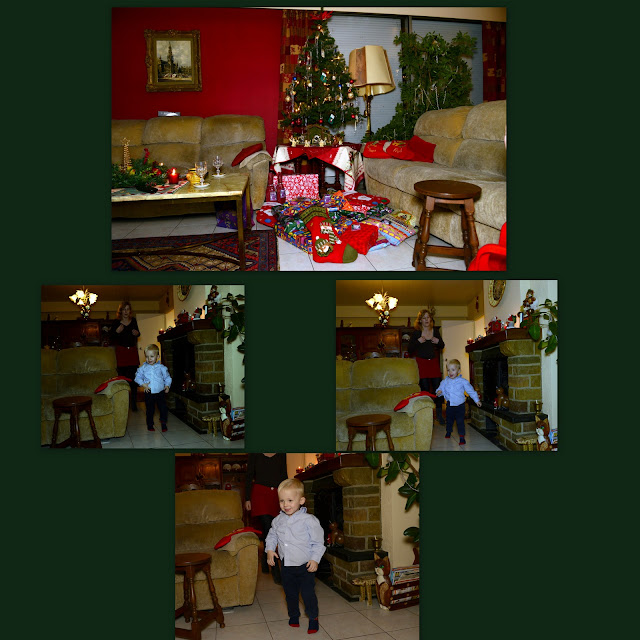 There were lots and lots of packages, and I had glued pictures of our faces on the parcels so he could recognize to whom the gift was destinated. And then he arrived with a big smile and discovered the colorful boxes under the tree. While we had an apperitif with little snacks the unpacking started ! 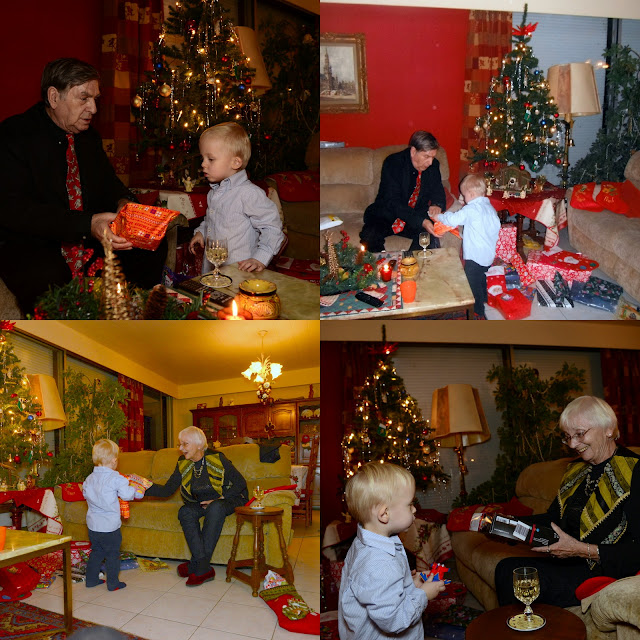 We had explained to him what he had to do, he took is job very seriously and distributed meticulously the gifts looking first at the photo. 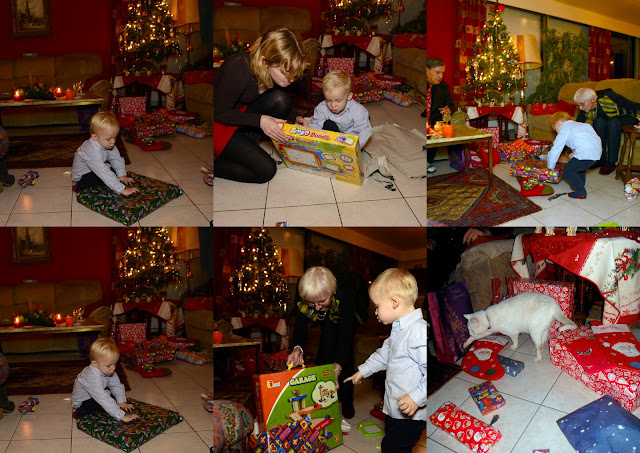 Of course he pulled out the biggest once first, which what a coincidence (!!) were with his photo ! With Mamma's, Papa's and Nonna's help he unpacked his gifts. Arthur also wanted to help !

When finally we had a big mountain of paper laying around and all gifts were unwrapped,
we started our Christmas Eve meal. Smoked slices of Salmon on toast, while Toby had his main course. 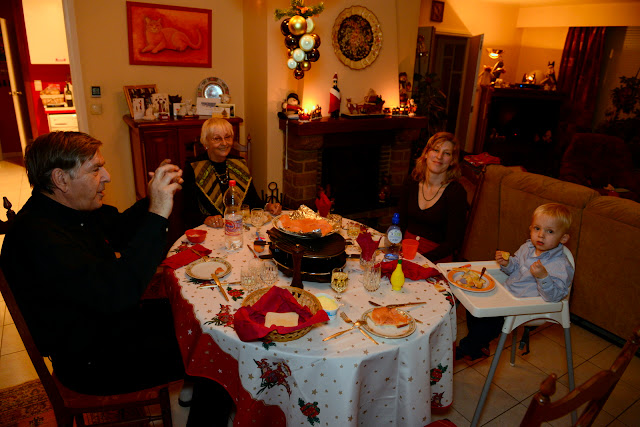 Then we made a pause and he played a bit 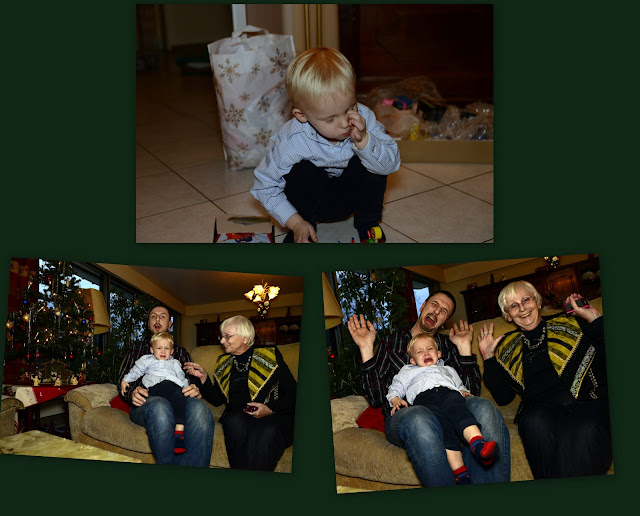 But he got quickly tired, it had been so exciting, he was ready for bed ! Therefore the "official" Christmas pictures with Papa and Nonna, were "perfect" ! 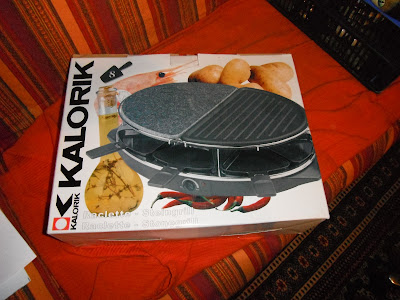 When he was in bed, we started the main course, a Pierrade which is a raclette underneath to melt the cheese and above has two plates, one in stone and one as a grill. So we had all kind of meat and cheese, which everybody prepared himself and I served a salad and jacket potatoes with it. It's fun and it tastes good !

And as dessert we had a rasperry ice cream "Bûche de Noël" litteraly translated it means a "Christmas log".

Full and happy the young parents started to built up Toby's new Garage and a little train station. 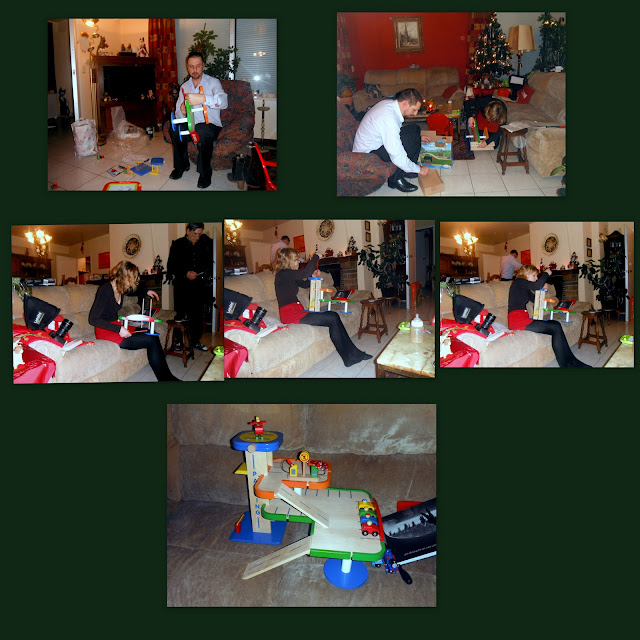 Daddy tried, but Mamma was far better in assembling and screwing the parts together and took over the job ! 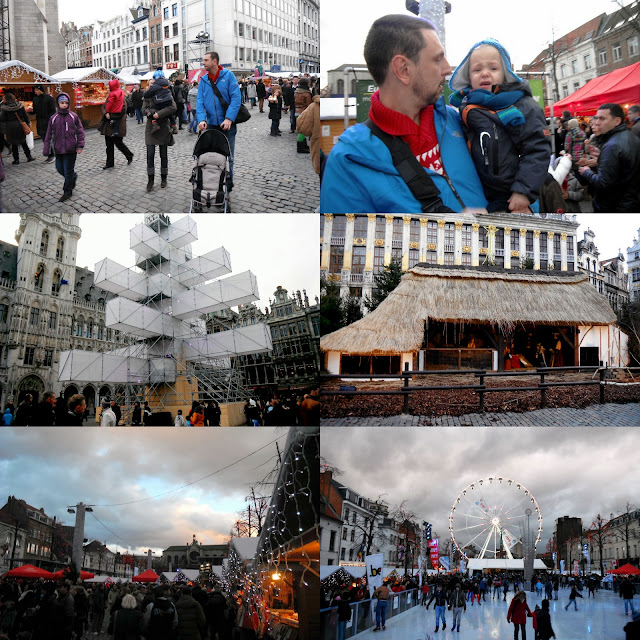 but first we had a look on the ugliest Christmas tree of the world on the Grand'Place. The market was so crowded that it was hard to see the stalls and it was really too annoying for Toby who only saw legs, and when he was sitting on Papa's shoulders he could see everything even more then we did, but he wanted Mamma. So we carried a loud screaming Toby through the crowd ! 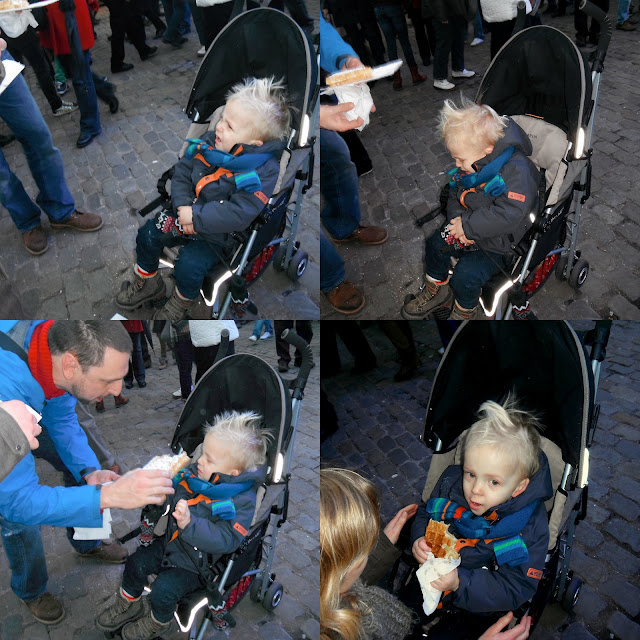 A Brussels' wafel calmed him down for a while, but finally we returned we had seen enough. Once on the sidewalk where he could run on his own legs, he was a happy little boy again.

In the evening we had our traditional Christmal meal, a turkey filled with prunes, chestnuts and Armagnac which was really delicious, and before as a Starter Scallops. 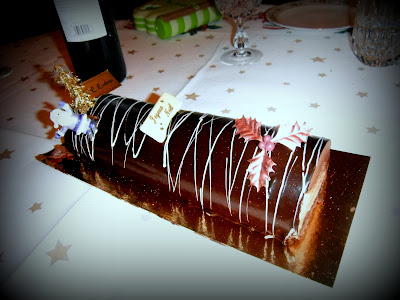 Our son keeps to traditons and had ordered the traditional "Bûche de Noël, which is made with chocolate mousse inside. Toby prefered Mama's fish plate to the turkey !

Now to be honnest I didn't do all this cooking ! I just bought it in my favorite "Deepfreeze" shop ! 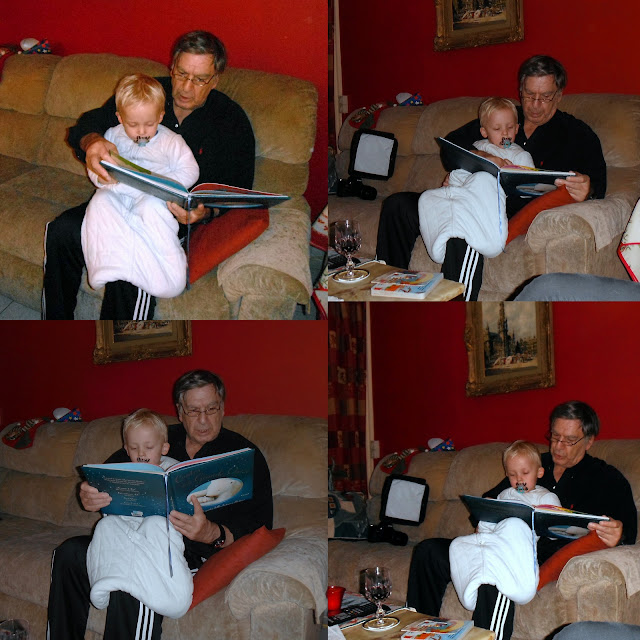 After his bath, Nonno read a story to Toby before he went to bed and so ended Christmas.

The next day, they left after breakfast, and we rested the whole day ! I had to sort out hundreds of pictures so I had enough to do.

The week ended in terrible rain and I took the opportunity to clean the house and then I just watched TV and blogged a bit !

The fir has the advantage, that it stays forever green. No autumn can change its color and no winter makes it to a naked tree, it is stubborn like a mule, it remains green, whatever season. The wood of most firs is considered unsuitable for general timber use, but the fir is not only giving a green spot in the leaveless woods but it became very popular as Christmas tree !

The Germans were the first once to use a fir as a Christmas tree with predecessors that can be traced to the 16th and possibly the 15th century, in which "devout Christians brought decorated trees into their homes.". Today the Christmas tree is used by everybody who wants to decorate its home, the cities decorate their streets and the shops use it to attract clients to buy gifts and also food ! Christmas trees apparently make people think to load their stomacs with lots of special food, with the disadvantage, that you are full for the following week !

In Britain, the Christmas tree was only introduced in the early 19th century, but the custom hadn't yet spread much beyond the royal family. Queen Victoria as a child was familiar with the custom and a tree was placed in her room every Christmas. In her journal for Christmas Eve 1832, the delighted 13-year-old princess wrote, "After dinner... we then went into the drawing-room near the dining-room... There were two large round tables on which were placed two trees hung with lights and sugar ornaments. All the presents being placed round the trees...After her marriage to her German cousin Prince Albert, by 1841 the custom became  more widespread throughout Britain.

Nobody cares anymore about the origin or history of the evergreen tree and how it became a Christmas tree ! The very first once in Germany were only decorated with apples and nuts, while today they are sometimes overloaded with glittering stuff of all kind, with balls, sweets, and fancy decorations. The real candles (which are still used in Germany) were replaced by electric little lamps or candles on a garland.

In countries where no firs are growing, artificial firs were invented and stand amongst palm or other exotic trees unusual for us Northern people

Cities all over the world want to have the biggest and most beautiful Christmas tree and it became a real competition.

I am not sure which country has the most beautiful tree, but sure is that this year in Brussels, they had the ugliest one ever standing on the Grand'Place ! 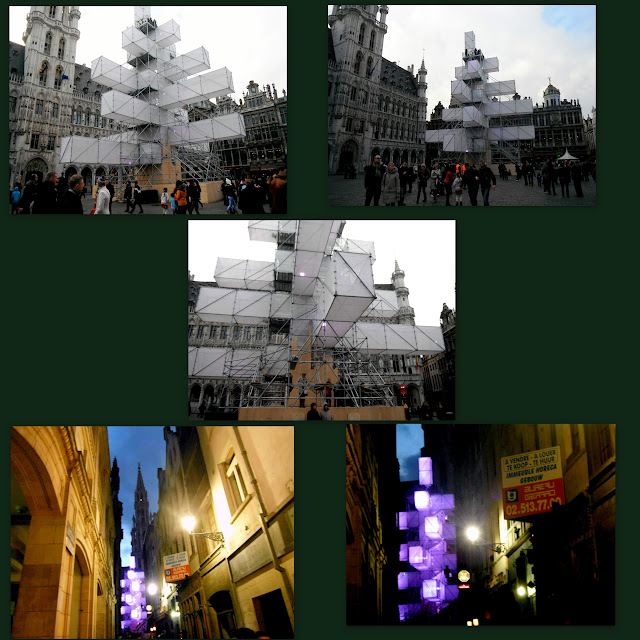 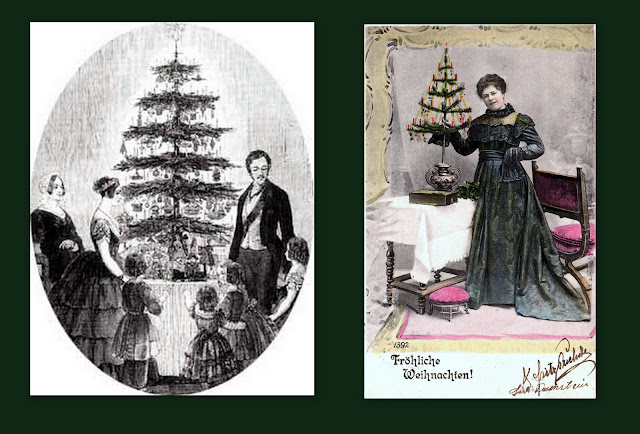 and very different from the simple once used at Victorian times ! 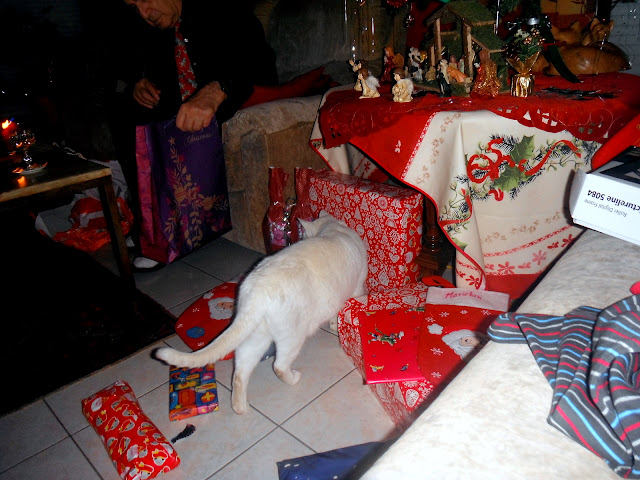 In my part of our world it rains 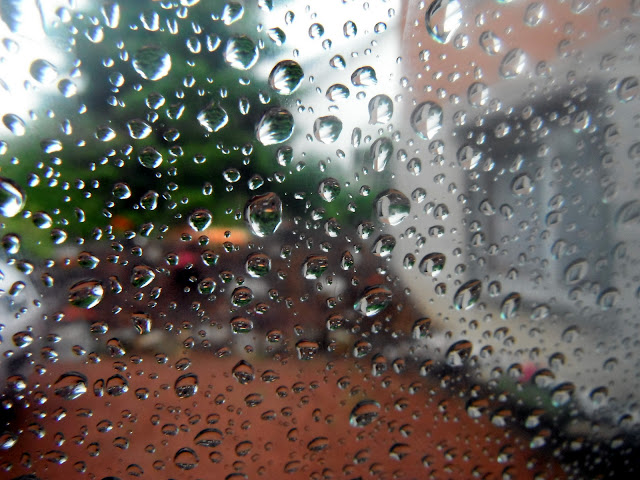 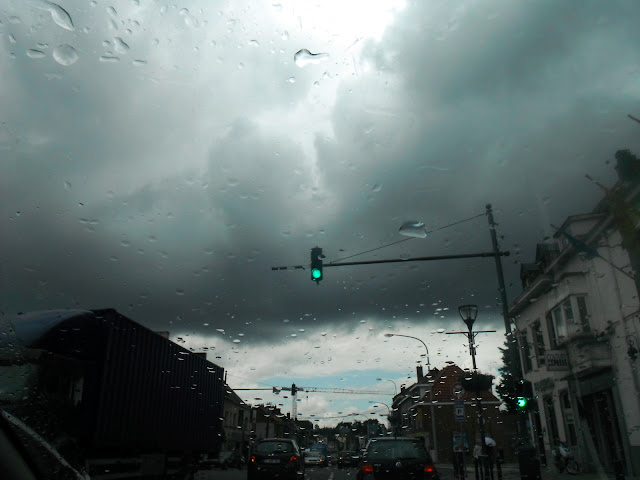 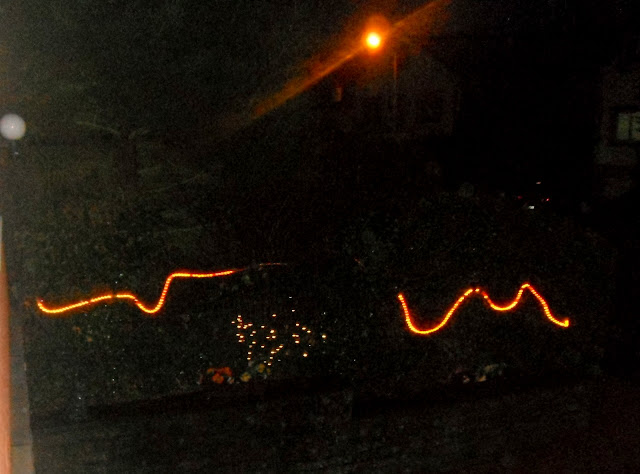 With all this water even our Christmas garland has lost some lights !

Christmas markets are also suffering from the rain, impossible to go somewhere and take pictures other then of the rain.

MERRY CHRISTMAS TO ALL OF YOU !

Helps you to remember what you have done on the weekend of December 22. If you participate please put the little logo on the top of your post and leave your link.

Saturday it rained cats and dogs the whole day ! It was just awful, we had to keep on the light as it was so dark outside. No way to do anything in the garden where I wanted to put some Christmas decorations. It had been raining since my return from holidays, so I waited for the last day in the hope the rain would stop !

I decided to not put my nose outside and switched my plans. I cleaned and prepared our guestroom for our son and family. And then I did some Blogwork. I thought the Photohunter themes are more or less always the same words and need some changements to make it more interesting for those who love to photograph. I googled for inspiration and questions, which you should answer with a picture. Finally I had the list for the whole year 2013. If you are interested have a look here "Themes in phrases" on my Keyhole Picture Blog.

Fortunately in the evening we had our monthly theatre this time the play was "Scrooge" from Charles Dickens. First I was a little suspicious about the play when I saw only a desk on a carpet on the stage. Indeed there was only one actor ! But he was great ! 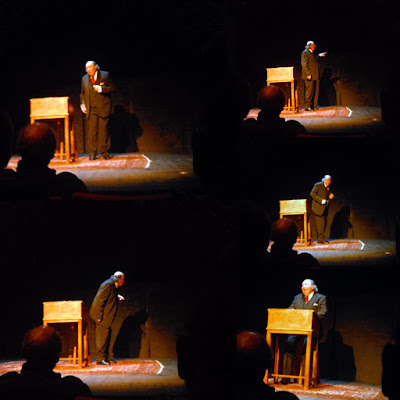 He told the story of the sour and stingy Scrooge a cold-hearted, tight-fisted and greedy man, who despises Christmas and all things which give people happiness. His emotional transformation was the result of supernatural visits from Jacob Marley and the Ghosts of Christmas Past, Present, and Yet to Come.The play (also a film)  has become a defining tale of  Christmas. It was so well performed that I could see the cold and icy streets of London, the people in rags and hungry and Scrooge himself in his bed when Marley and the ghosts visited him. It was a real pleasure for your phantasy. 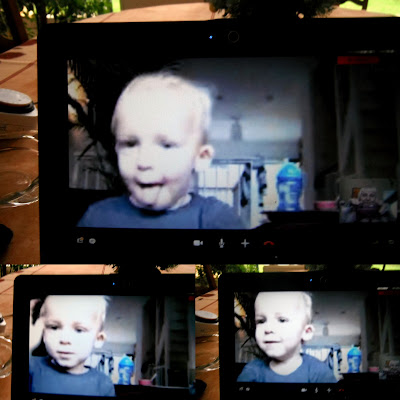 He was in a very good mood and apparently learned somthing new .... unless it is a pure coincidence, to stick out his tongue to his Nonna ! 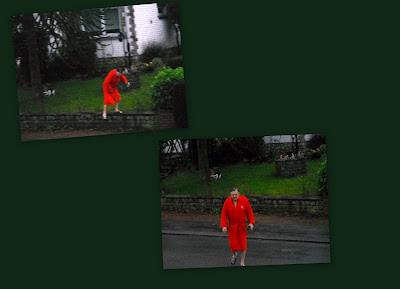 This is not Father Christmas without beard and only half dressed,  but Mr. G. who after a bath crossed the street to feed Chouchou the neighbor's cat, because they went away over Christmas and New Year. Fortunately in our street you can do that without being taken for a psychotic, just escaped from a madhouse.

We finally managed to hang our Christmas garland in the hedge between two showers, and only noticed then that most of the little bulbs didn't work anymore. We have to buy a new one next year. 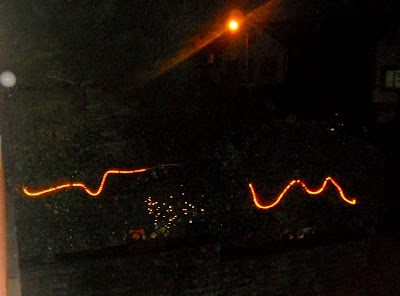 With the bad weather I hadn't been able to take the fake flowers out of the pots which I had put in in October, but ever since it rained or I had no time to do that, so we will have a front yard with blooming flowers, a Father Christmas and Christmas lights. Why not, in some countries it's normal.

Labels: Skype, What did you do this weekend ? Scrooge
Newer Posts Older Posts Home
Subscribe to: Posts (Atom)