Opening the curtains at 7 am and see the ink blue sea and the blue sky is such a pleasure ! And it is so warm ! 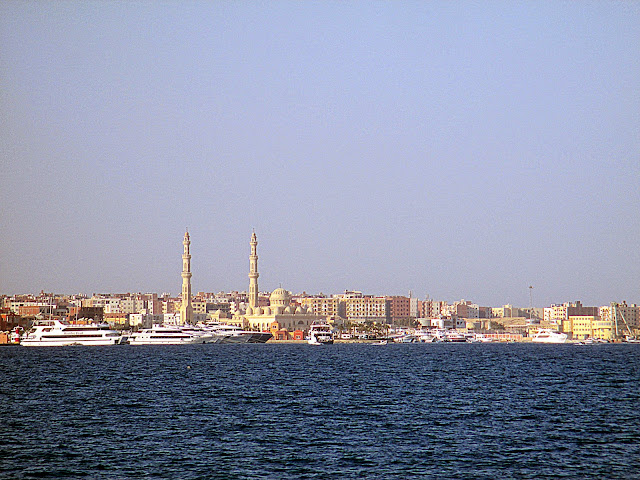 (zoom) view from our balcony

Some people at meals can never get enough, they overload their plates and then leave half of it, only because it's "All included". It is really a shame ! 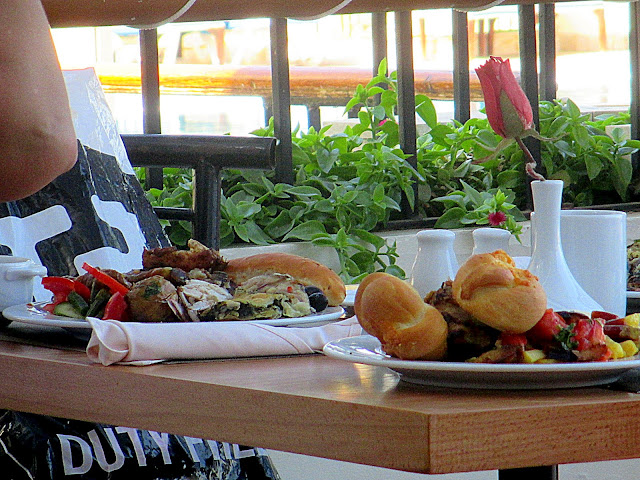 This was on the plates for one person ! Of course he couldn't eat it all !

My compatriots, the Germans are  getting on my nerves ! They put their own  towels, books, hats or whatever they can find on the beach beds and we the honest people wait until we get the hotel towels and then when we want to choose a  bed  the best places are already taken ! I  really think I should take all this stuff away so that they have to line up just as all the others to get their beach towels and then choose the beach bed ! 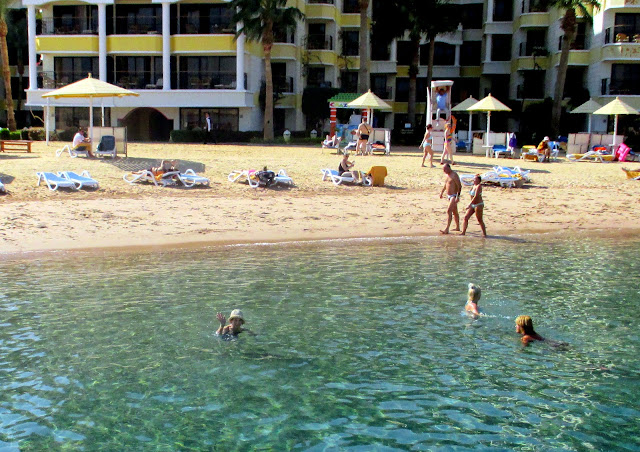 Nicole swimming in our little bay

With swimming, chatting, time flies by. It is also interesting to meet so many people of different nationalities. I became a kind of circus attraction because I speak English with the British people, German with the Germans and French with the Belgians or French people. Sometimes they ask me to help to translate when there are communication problems. It's really fun ! Today a group of four young Germans from Munich asked me from where I was coming from ! They came from Munich and we had a nice chat together. 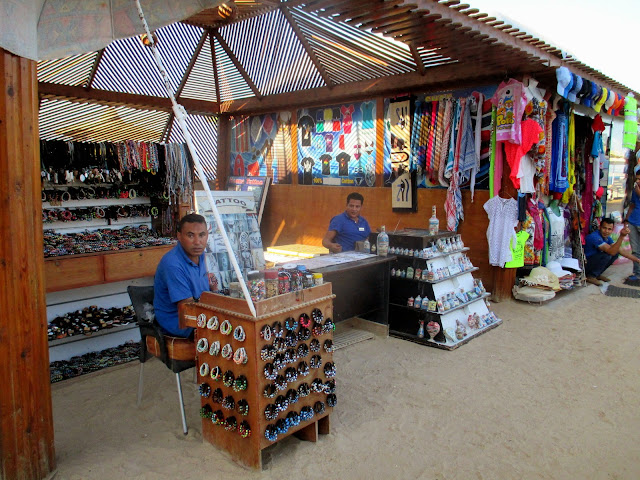 This guy makes bracelets the whole day on the beach !

Nicole's English improves each day a bit, she has difficulties to pronounce some English words, lack of practice.

After supper we are usually so tired that we just want to go to our room, read a bit and then sleep like two babies ! The food is excellent, a lot of choice and so many vegetables, certainly real organic ! 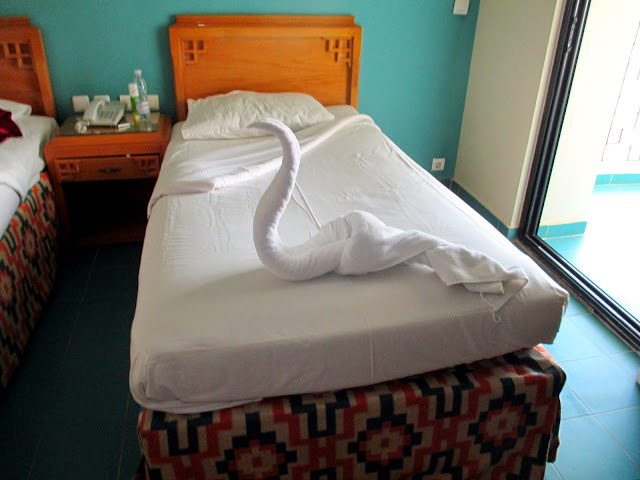 And this evening there was a swan sitting on my bed !
Posted by Gattina at 05:30 5 comments:

I thought I would wake up very early like at home around 6 am, but when I opened my eyes it was already 7.30 pm ! I quickly throw my kaftan over my nightgown and went to the lobby for internet connection in the hope it would work and it did ! Finally I could publish my post !

The sun was a little covered but it was very warm.

With all these people of different countries and languages funny things can happen ! I sat at a table and a gentleman asked me in English if one of the seats was free, I said yes and he sat down. Came a lady who also asked in English if the other seat was free, we both said yes. Then the man said to the lady that she apparently wasn't English because she had an accent ! But he had an accent too, a German one ! The lady said "Yes that's possible because I am German" that made me laugh and I said,  and I am German too ! We all bursted out in laughter, here we were sitting the 3 of us all Germans, talking English together ! Then of course we switched the language.

Nicole had climbed in the bath tub and the shower top fell on her forehead, now she has a blue horn sitting in the middle ! She said, now I am a horned widow !

I  also had an adventure in the bath tub, I stood under the shower when suddenly the electricity went off and I stood there in the black bathroom and didn't dare to move ! I thought if I move I will fall out of the tub ! After a while the light went on again, and I could finally finish my shower. I admit it had been a little scary ! 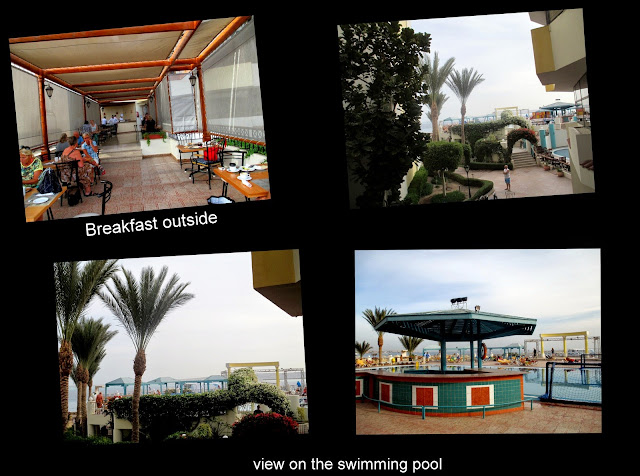 We had our breakfast outside, with view on the swimming pool and then spent the whole day at the beach 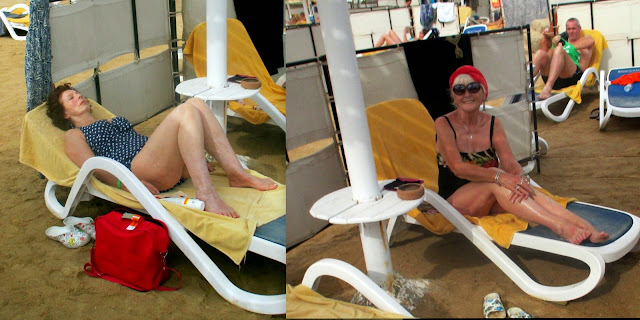 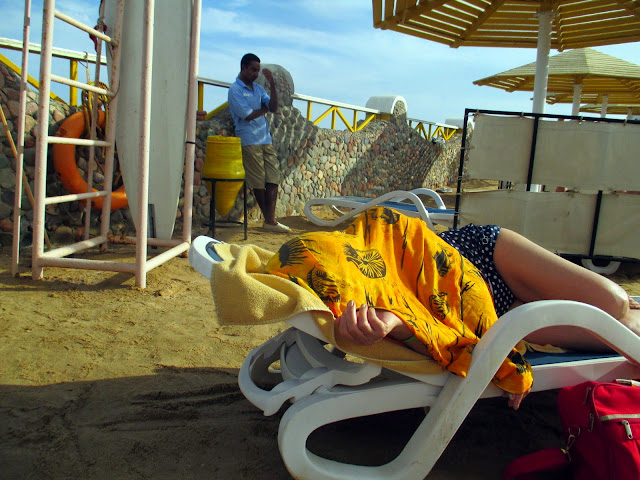 At work, Nicole sleeps in the sunshine ! 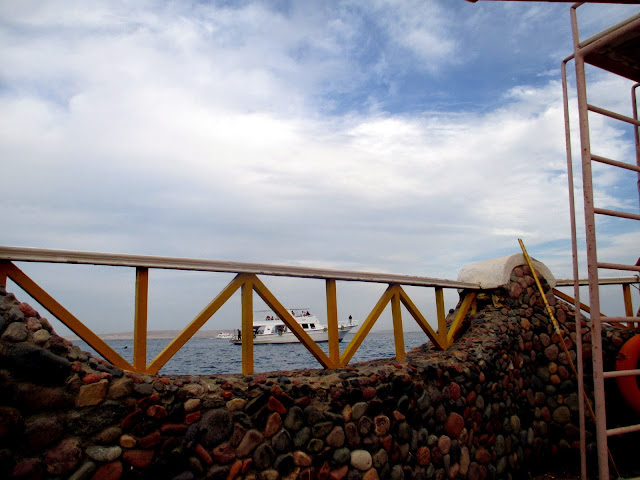 View on the sea 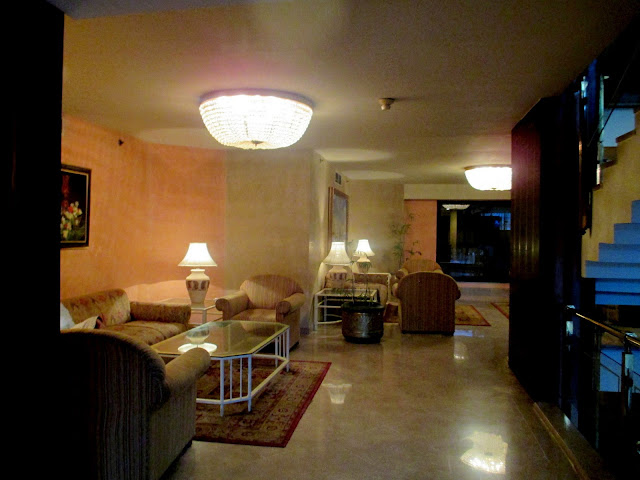 Little cosy lounges for internet (if it works) 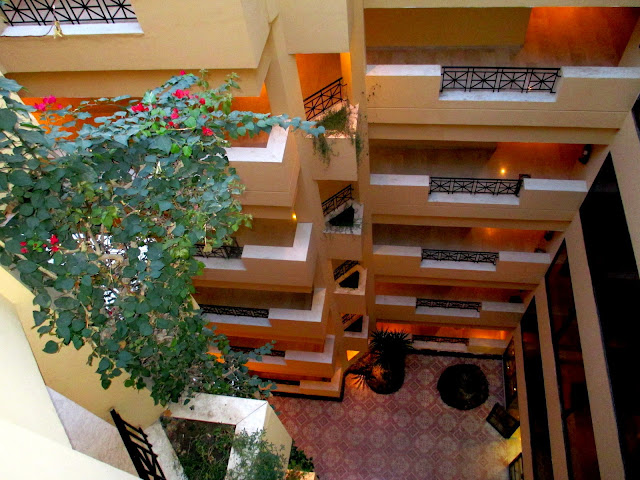 View from our floor inside the building

At 4 I had an appointment for a massage anti stress. Massages are very cheap here and the lady had iron hands although she looked so small like a feather !

After supper we are for the moment so tired, that we just go to our room and read !

This is not really a "Friday's Fave Five" as I  am writing a kind of online diary !

As Internet is slow and difficult, I may not be able to comment !


On Tuesday we left a very cold, foggy and rainy Brussels. The airport was very busy, although it was only 6.30 am. The whole airport looked like an enormous Christmas market and after the check in we had to walk through gift shops and gift shops all decorated for Christmas ! 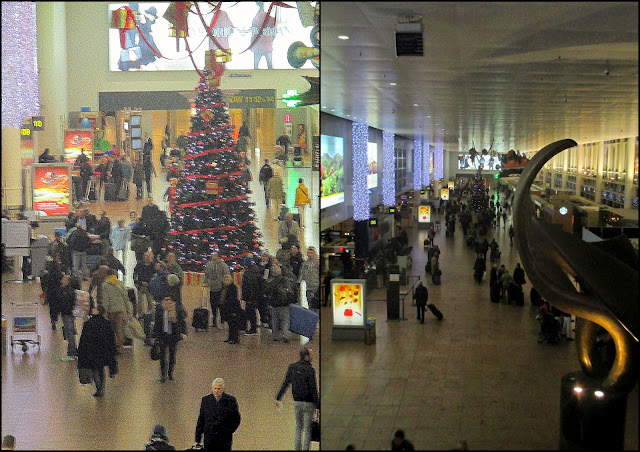 We had to walk to Gate 382. We wandered! around and around and couldn't find this gate. We asked 3 times different airport employes, they didn't know (how nice for Europe's capital airport) until finally we found one who told us that he believed the gate was B 82 ! The B had been badly printed  and looked like a 3 ! I was really furious ! Why don't printing errors happen with bank notes ? I would be rich by now !

We were not the only once, but finally arrived at the plane and could take off in time ! From 1°C we landed 4 h later in 30°C heat, and a beautiful sunshine ! It took a while until all the visas were checked and stamped and our suitcases were already laying around on the floor ! We finally found ours and the travel agency's bus drove us to the Hotel. The check in went quite quickly and then came the big surprise, we had gotten a room which looked like a utility room, very small and with a view on the beach bar, and of course could hear the loud music. That was then when I lost my temper, we were tired and wanted to unpack, but certainly not in this room !

I went to the reception and complained ! I told them that I am a faithful client and had been in this hotel already 5 times. On top of that I had gotten a personal letter from the Hotel manager who welcomed my arrival. When I showed the letter, and had told them what I thought, staying polite but still, we immediately got another room, this time with a beautiful view and on the 4th floor. It also was much bigger. By the time we finally wanted to unpack, we were so tired that we didn't know anymore where we had put our things. We were looking for the keys, passports, money, etc, and finally decided to go first for supper and then to bed. Tomorrow would be another day. We had a very nice meal, although the restaurant's decoration had changed and I almost didn't find it anymore ! 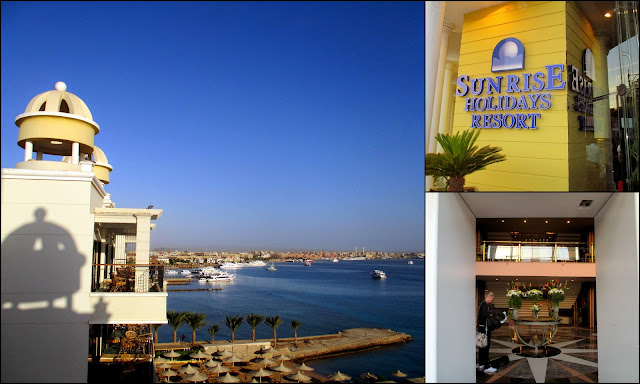 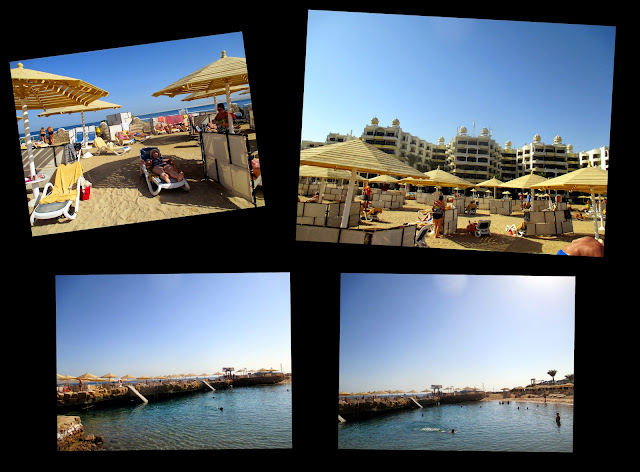 After a good night rest in this very quiet room, I was sitting the next morning on the balcony with this beautiful view ! It was already warm and after a good breakfast we started our "work" on the beach, chatting, reading and swimming. There are lots of Germans and English people here, I also heard some Russian but not as much as the other years.

Unfortunately Internet  connection is not the top and it takes time, and patience is not one of my qualities !

So the first day went by and we feel already much better ! 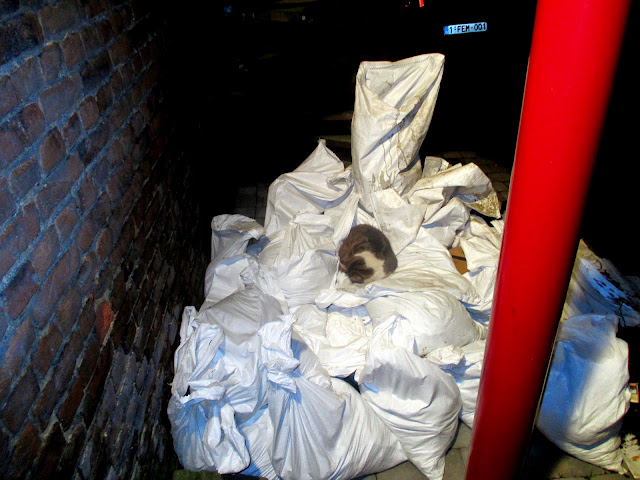 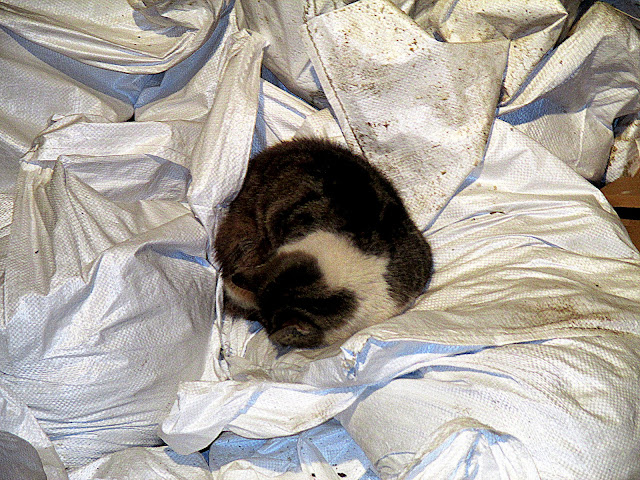 ESCAPING TO THE SUN AND WARMTH 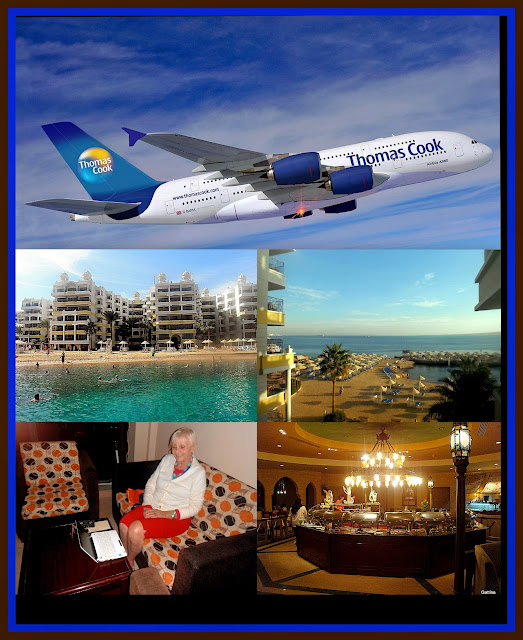 I am sitting in the plane taking me to the Red Sea in Egypt. This afternoon I will be there, enjoying the beautiful hotel, the very good food and the warm weather and sunshine.

Autumn and winter is just not my season, it makes me moody and depressed. 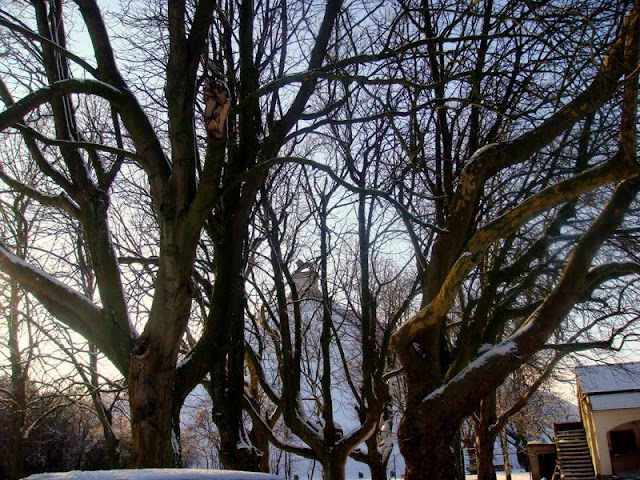 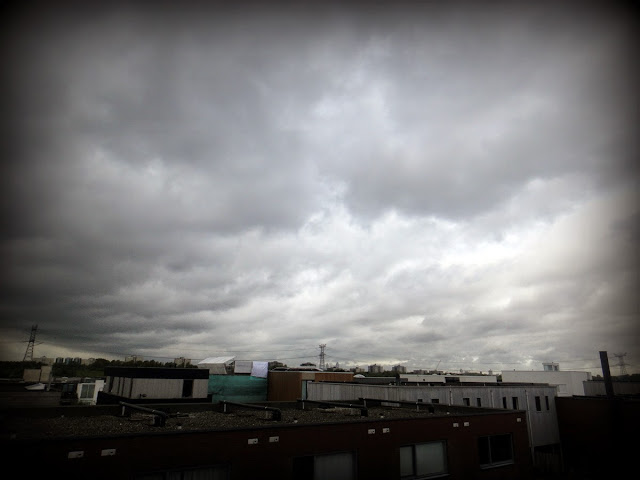 it's dark and humid 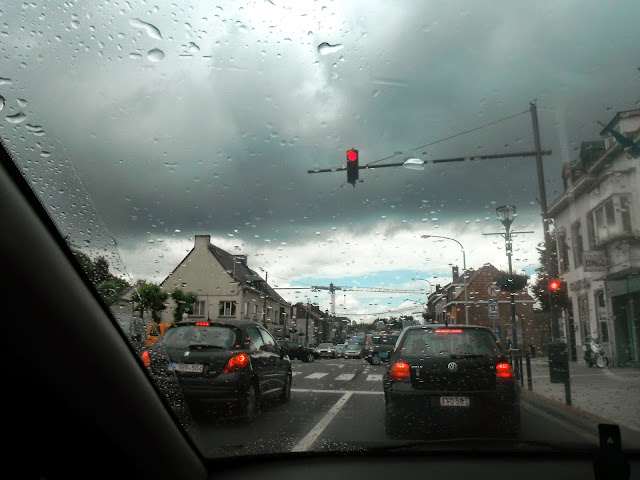 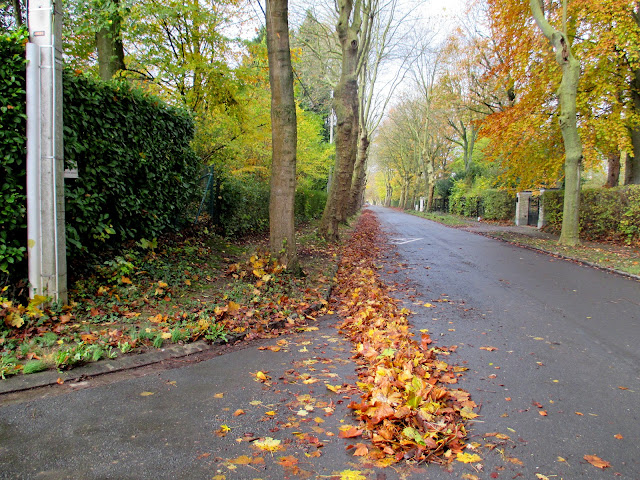 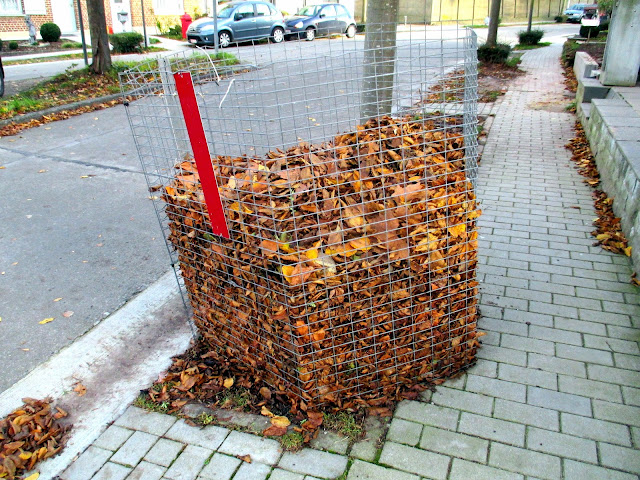 and the stripteasing trees make a mess !

When I come back I hope I will run again like a car, the tank full of petrol, to be prepared for Christmas ! For the moment I don't enjoy Christmas decorations and preparations at all !

Next time I will be blogging from my little tea room/café in the hotel  !

And for those who are worried that I dare to go to Egypt, I can tell them it is not dangerous at all where I am going !

MY WEEKEND OF NOVEMBER 29

A very busy one ! I had to check my summer clothes for my trip to Egypt on Tuesday, and do some laundry before I leave.

Claudie my friend from Southern France had asked me to check the renting contract for a room in Brussels, for her daughter who will spend 3 months here for her studies. We had a long chat on Skype, and now it is all settled, and the contract signed. I informed myself about the house owner and as he is a lawyer there shouldn't be any problems.

In the evening I went with Nicole and my neighbor to the Theater where we have a season ticket. 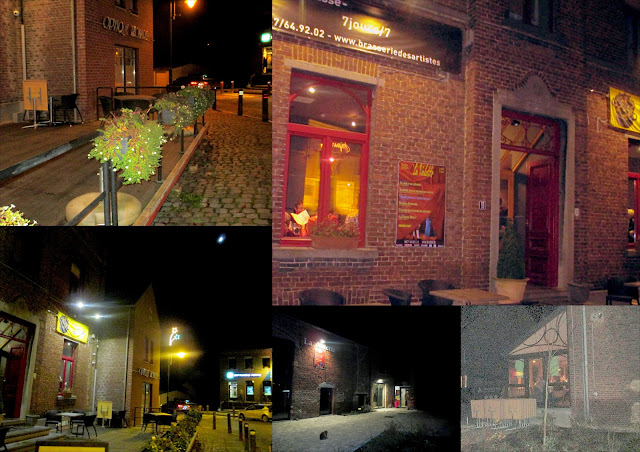 First we had a nice supper in the Theatre's restaurant, and we were surprised that the flowers in the pots were still blooming. The Theatre's cats greeted the audience ! 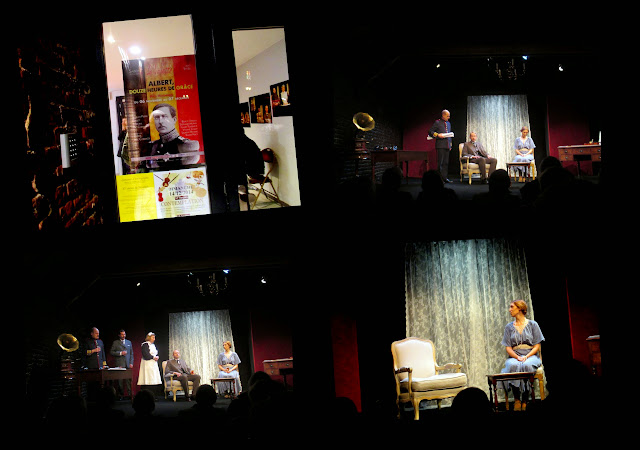 This time the play wasn't very nice, it was about our King Albert I and his preparations for WW I ! Since May we have an overdose of these war stories, so the public (not even the most patriotic once) was not very enthusiastic and the actors got a very poor applause ! It was the first time since all these years I am going there that I realized that the seats were hard ! But we made the best out of it whispering comments in each others ears and giggled and laughed (discretely !). But at least it had been a very nice evening.

Sunday was an awful day ! It wasn't raining but it was foggy and very wet, I put my travel computer in order and prepared all chargers ! You almost need a truck for that ! I wonder why chargers are not uniform ! I needed one for my camera, for my mobile, for my computer, for my kindle, and for my other camera in the hope I haven't forgotten one !

In the afternoon Mr. G's young friend came for a visit, he is two years older than our son and fixed things for us. Now that we are a vintage couple there are things we can't do ourselves anymore. I had a leaking flower pot which was very heavy, but for him it was light like a feather, I could finally change the pot ! We also had problems with the toilet cover which he fixed as well as some screws to hard to unscrew. Mr. G. has no strength in his hands anymore and I have always been a "weak" woman, at least for these scores !

I told him that he could make a fortune with helping out vintage people, I would have a lot of future clients for him who have the same problems !

We spent a very nice afternoon together ! He told us that whenever we need help that we can count on him. There are often so little things we never thought of before, but even changing a bulb in a lamp hanging high up can become a problem ! 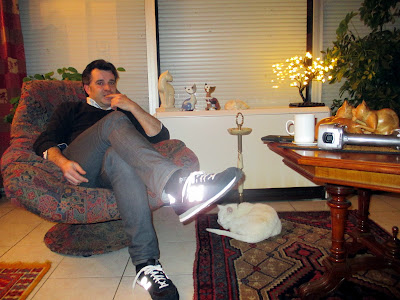 Arthur was a little disappointed that he was not wearing his so nicely smelling leather shoes which he adored for sharpening his claws,  as it happened once and our friend had to take his shoes off. Now he comes in sport shoes !