1. The first two days of the week I was mostly busy with making headers for my blogs for next year. I didn't go outside at all, as Waterloo was packed with Christmas shoppers who bought their gifts in the last minute and the weather was also very bad.

2. I went to Ilona to celebrate Christmas just the two of us and exchange our gifts. She has  offered me a beautiful pullover which was perfect for Christmas day. We had coffee and a piece of the traditional French and Belgian "Buche de Noel" (which would mean Christmas log, as it looks like a log and is in chocolate) of which she had some left. She had celebrated Christmas on Sunday with her rather big family, her daughter has 5 children all with partners, her mother, sister, son and wife and her great granddaughter ! Compared to that I have a mini family ! We   had a nice time together.

2. To celebrate Christmas with our son in Amsterdam we took the Euroline bus and didn't go by car, as the weather was so rainy and foggy and we didn't want to arrive tired for Christmas Eve.
The journey was very comfortable, the bus even had WiFi. 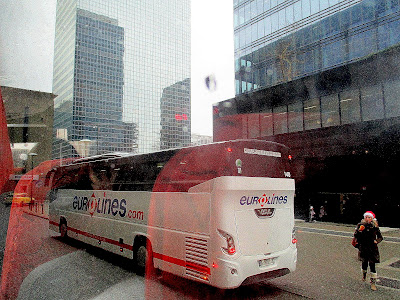 Dominique drove us to the Brussels North station where the Euroline buses have their station too. In Amsterdam our son picked us up at the Station.

3. Once arrived we had a very much needed coffee and then a little lunch.
Christmas Eve arrived very quickly 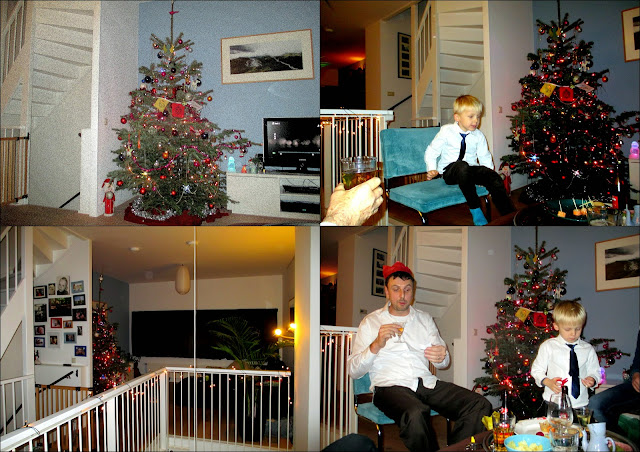 There was a beautiful big Christmas tree, and Toby and his Dad were festively dressed. A friend of my son arrived too and we had a Christmas drink and little snacks.

Then was time to prepare the Pierrade. From the living room we could look down into the kitchen, to watch the busy bees. As there is a lack of space for houses in this area of Amsterdam, the rooms are one above the other and there are many steps !

We enjoyed our meal and grandson Toby was waiting for the "Buche" to be cut and served.

Unfortunately while carrying down glasses, I missed a step and fell 4 steps on the kitchen floor. Fortunately nothing was broken my left thigh was badly bruised and also my right elbow ! I got a light shock too and after that was quite handicapped and walking hurt very much. My son gave me a pain killer and I felt a little better.

4. The next morning at 7 am little Toby was already waiting to open the gifts Father Christmas had brought over night. For Mr. G. and me it was not the ideal moment, so early morning and a cup of coffee was an absolutely must ! We were used to exchange our gifts on Christmas Eve.

Once Toby had distributed all the gifts to his parents and us, he got dressed in this cute Christmas pullover and started to play ! The gift mountain was rather high ! We got a beautiful framed picture of us and some other things.

Time went by, I was mostly sitting on the sofa, each time I moved it hurt ! 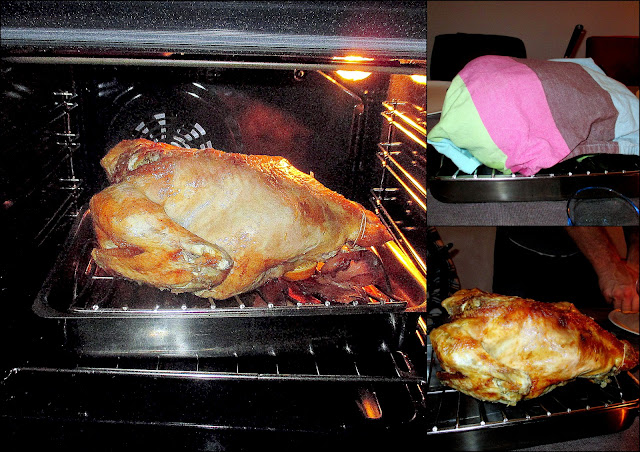 My son had prepared this rather big turkey although it was the smallest one he had found.  It  tasted delicious. I first thought it would be far too much for the 5 of us, but finally there was not that much left ! 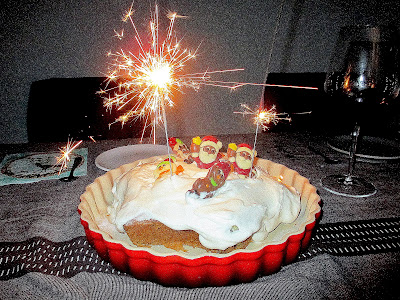 My DIL had prepared this beautiful cake, which also was delicious ! Mr. G. was, I think the best client of the cake ! 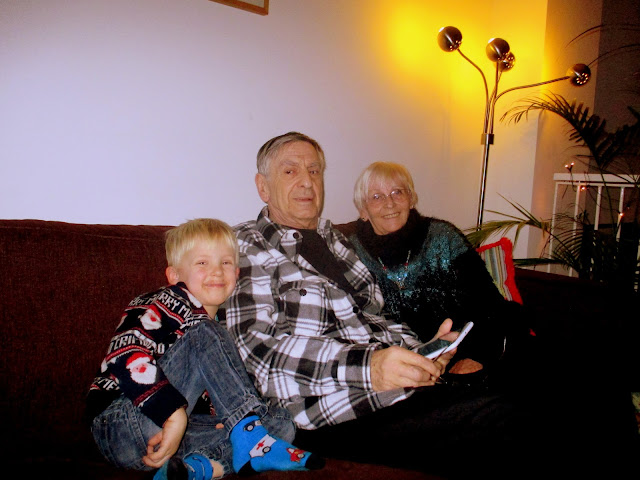 and here we are posing for a Christmas picture.

So another Christmas went by ...

more participants at Susanne at Living to tell the Story.
Posted by Gattina at 18:53 13 comments:

My grandpa, after lunch used to have his afternoon nap. Therefore he lay on the sofa and snored peacefully. He was all round, round head, round face round body. And he was bald. The flies loved my grandpa's head and used it as a kind of airport. They walked across the smooth surface and the poor man woke up because it itched.

I lived with my grandparents and was maybe 4 or 5 at that time and wanted to help him to get rid of the flies. I knew that my Grandma kept a flyswatter in the kitchen. So I took the flyswatter, stood behind his head and as soon as one fly landed on grandpas skull, I slapped on the fly with all my strength to kill it. What I hadn't realized was, that my poor grandpa woke up in pain, not because of the fly, but because of the blow on his head !  I will always remember his face when he saw me with the flyswatter in my hand ! I felt very bad, I hadn't want to hurt him. My grandpa, although having been disturbed in his sleep, laughed out loud and thanked me for my good intention. He really was the best grandpa in the world ! 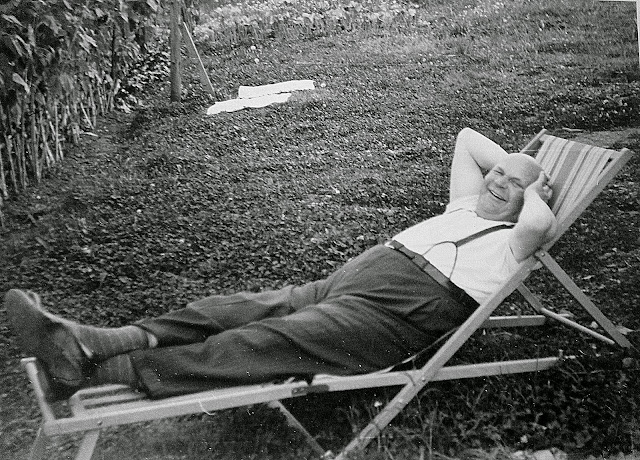 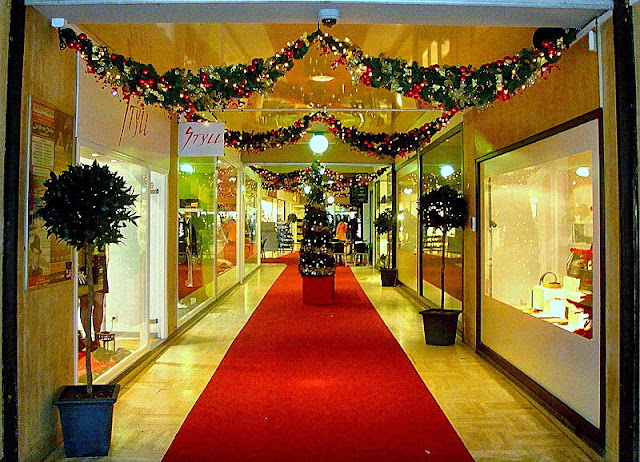 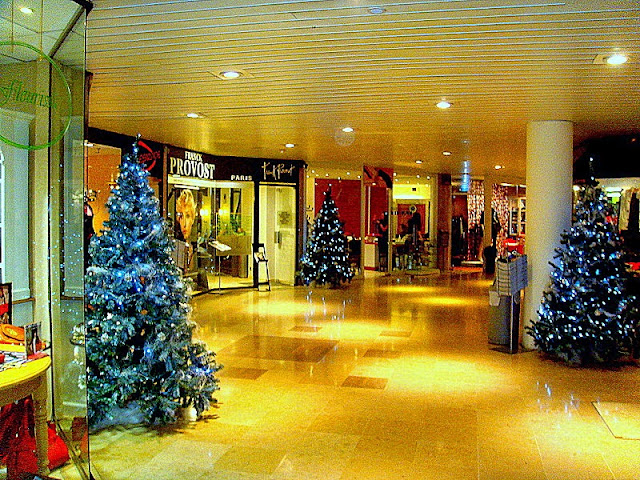 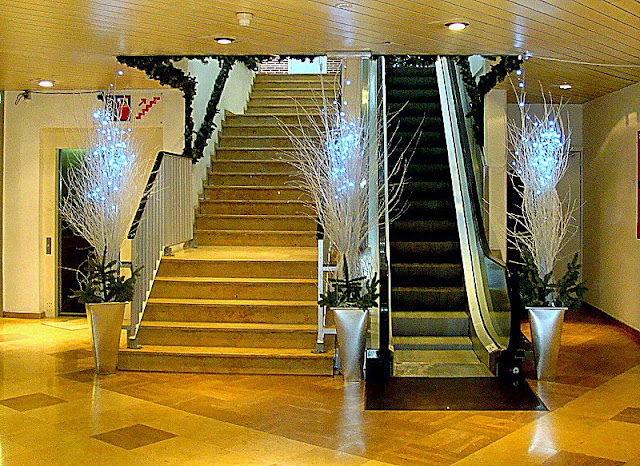 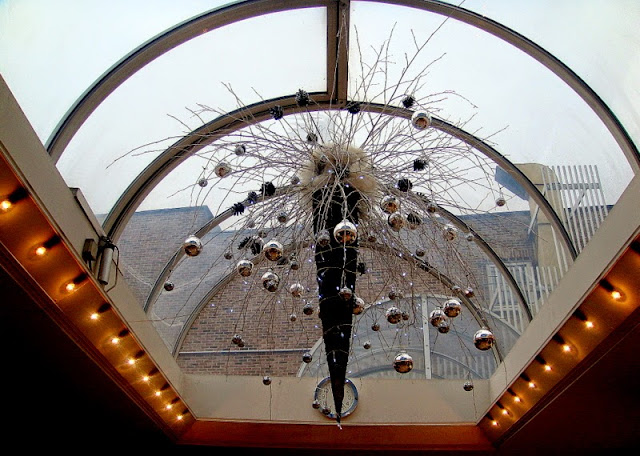 Wellington shopping gallery in Waterloo. You need a very full wallet for shopping there !

MY WEEKEND OF DECEMBER 20

On Saturday I bought the last Christmas gift, which was for Mr. G. I blessed the fact that I had done all my Christmas gift shopping before I went on holidays to Egypt ! Despite the so said "economical crisis" I have never seen so many people in the shops and cars on the streets ! The whole town was full and you had almost to kill somebody to get a parking space ! I had never seen that ! It took me twice the time I usually need to drive into the center ! Just mad ! On top of that it rained and it was very windy, a real joy to go shopping ! As I knew what to buy, I only went into the store to buy the gift and returned home immediately !

The rest of the day I spent with sending Christmas cards making labels for the gifts and did some phone calls to my school friends in Germany.

On Sunday morning, my friend Christiane and I went to the Brussels Midi Market just for a walk and maybe buy some more gifts if we would find something special. Christiane found some nice leggings and a shirt for her husband and I a nice pullover to wear for Christmas. I also bought some fruits. We had a coffee and then took the bus back to Waterloo, just in time before it started to ran again !

In the afternoon I started to wrap the Christmas gifts. 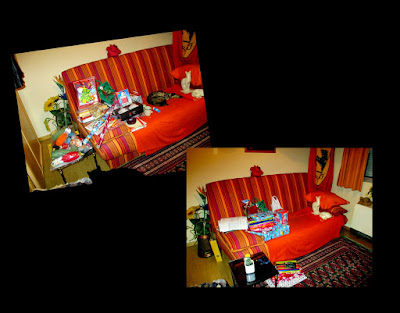 An hour and a half later, it was finally done. My legs were stiff, my back ached, I felt very Chrismassy ! When I think that the paper will be torn off in seconds ! Mr.G. during this time soaked in a nice warm bath. He pretends he can't wrap gifts. Good excuse !

Now everything is done, I just have to put all this in a suitcase for our trip to Amsterdam where we will celebrate Christmas with son and family.