Yesterday I stumbled over a post where somebody described her misfortunes as a scatty person. That made me think of three misfortunes which happened to me, the last one this year probably because I am very scatty too.

Long time ago, we were invited to a Cocktail with a lot of very posh people in a very elegant place. I remember I wore a beautiful dress with flower patterns, it was out of muslin with lots of flounces and at calflength.

I was very proud of my dress and stalked around like a peacock amongst the guests. Then unfortunately I had to go to the restroom and when I came back I was even more proud because everybody starred at me and my beautiful dress. That's what at least I thought. In reality my dress was stuck in my briefs at the back and I peacocked around showing what usually is hidden. People smiled and some laughed until a good soul told me why I draw so many attention to my persona. What should I do ? I pulled the dress out and laughed and it became really funny and more cool . Of course long time after that people still remembered my "performance".

One day I was a little late and very much in a hurry, because I had an appointment with a client and my boss in his office. I arrived ponctually in the garage and when I got out of the car I noticed with horror, that I still had my dark blue felt slippers on ! I couldn't return home, that would take too long and the two men were waiting for me, because I had to translate from French into English. First thing I did when I opened the door, I showed them my feet and told them what happened. They both laughed and me too and then we could start with the business discussion. I really looked very elegant in a beige suit with a short skirt (it was the mini skirt time) and my rather old felt slippers.

The last "adventure" of this kind I had not long ago in January. It was very cold and I wore always leggings under my jeans. I had to do some shopping so off I went and when I arrived on the parking I discovered that I had forgotten my jeans ! I was there in my black leggings and a winter jacket ! Fortunately nobody had seen me, because I looked very comical. I quickly returned home, put on my jeans and went shopping !
Posted by Gattina at 06:00 5 comments:

I had lunch with Dominique in "La Pomme" (The Apple) and as the weather was so nice we could eat outside in their garden. I had goat cheese with honey salad, and Domi a Kentucky salad (whatever that was, except it was very good and with chicken)
I took these pictures from the inside of the Pub, because it had some new decorations like the Buddha and the motorbikes.

There was also this thing which I didn't know what was and I asked the waiter. It turned out that it is a washing machine from 1930 ! That was already a big progress for the women who had to wash all their laundry by hand. On one side you had the washing drum and on the other side the spin. When I think how we wash today, we put the laundry in the machine and it comes out dry, while you watch TV or read a book ! Or do your blogging

The tree behind the garden shed started to look like the tower of Pisa or like the bias head of Horatio from CSI Miami, so we thought we had to have it cut off before it fell on the roof or in the neighbor's garden. Our brave gardener did it in half an hour and cut the trunk into handy logs for our open fire.

4. I had walked on my turquoise stones with corals necklace and it had broken. I drove over to Ilona who has learned to repair jewelry. This came very much on purpose and at least my necklace looks like new and I can wear it again.

5. Last week in our painting group a responsible from Waterloo's cultural service came to ask us to paint a picture representing something out of the book "Les misérables" from Victor Hugo (there is also a musical about it) because this year Waterloo celebrates the 150 th anniversary of the book which he has written in Waterloo. There will be an exhibition in September with extraordinary items, many never seen in public before, and a lot of other activities. I did some researches during the whole week to find a picture which would inspire me for a painting and finally (thanks to Mr. Google) found one. I started the painting today. 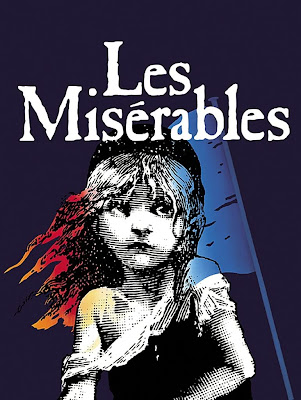 The Hippies came out of the student's revolution in the mid 60th against the establishment. They wanted to change family rules and go back to nature. They moved to the country lived in groups and everybody slept with everybody there were no couples. One should be free whatever that meant !

I was in the age to be a hippie, and for certain things I agreed with them, but I still was for marriage and an only love at one time. I didn't want to live in the countryside although I love it, but sleeping together with cows, goats and dirty men was not my dream of life. I loved the idea of peace and love (pronounced in French like "Piss and laugh") and no war.

Quiet a lot of young men and women immigrated to Australia. At that time it wasn't difficult at all, Australia still needed people to fill the country.

They lived in groups grew vegetables and had life stock and lived with that. There were no couples, it was "free love" (?) and children often didn't know who the biological father was ! The girls had long hairs and wear flowers, the boys had long hairs too and looked like old pictures of Jesus Christ. It was back to nature in all it's glory, without electricity or other modern appliances.

I also remember that at that time a lot of boys and girls went to the Spanish Islands, where they lived in Hippie communities. They probably returned after a while from this frugal life and are respectable fathers and mothers today (or even grandpas and grandmas by now), with a house and a garden, grown up children (hopefully their own once) and a cat and a dog. Gone the time of living in pure "nature".


The only thing I liked very much was the Hippie fashion. I had no long hairs didn't wear flowers, but I liked the long skirts and the "wrinkle" look. I wore jeans with flower patterns and I remember I had a suede jacket with broderie and sheep fur which I loved to wear.


There are still some hippies left on the Spanish Islands. I saw some, now my age, the men with long thin hair or bald with a tiny little pigtail in their necks, grey or white of course and the women also with long hairs which make them look like Halloween witches. They are really out of time now and long forgotten. 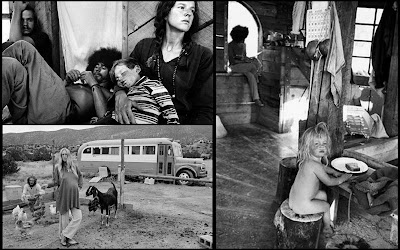 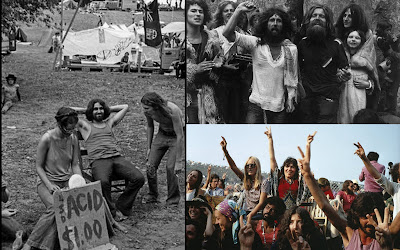 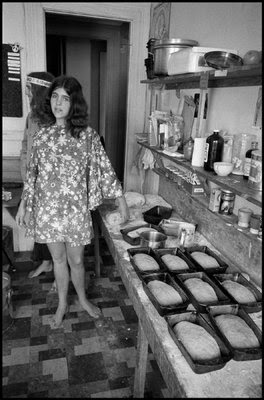 Baking their own bread 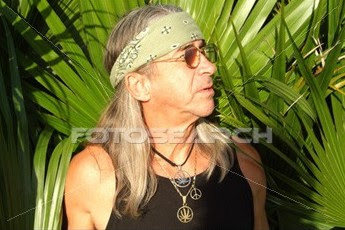 and today (this one still looks quiet decent)
Posted by Gattina at 06:00 17 comments:

Parking of a big company near Bruges
Posted by Gattina at 06:00 9 comments:

Helps you to remember what you have done on the weekend of June 4. You never know if you need an alibi ! If you participate please put the little logo on the top of your post and leave your link.

It was very hot this weekend up to 30° which is very unusual in Belgium for this time of the year. Inside the country you get the impression that there is no air so when it is so warm it's suffocating.

Our houses of course are not equipped with airconditionning, as in "normal" years it's never so hot or only for a few days in the whole summertime. So I was happy to drive in my aircondioned car, my neighbor Vivi to the hospital again for her shot in the left eye.

I was so impressed by the machines they have today to check your eyes that I took this pictures. A scanner shows your eyeball all around ! It's amazing.

I could have sat in my car the whole day but of course that wasn't possible. After a little shopping to buy the ingredients for my pasta salad, I spent the rest of the day hanging in front of my notebook in the garden observing the cats and answering emails.

While watching TV I opened all windows to get a cool draft through the house, but it was still warm. In the night we had a thunderstorm and heavy rain, so the next day it had cooled down a bit.

The rest of my time I was busy with checking timetables for trains to the UK, Bed & Breakfast accomodations in an Oxford University where I want to stay for 2 nights when I come back from Eastbourne end July.

Mr. G. had to take cat Pookie to the vet, she has a carbuncle under her tail, poor thing. Now we have to give her two antibiotic pills per day that's quiet a work or more a battle !

I suppose that everybody has a favorite TV series. Mr. G and I love to watch the Midsomer murders whenever they are on TV, which unfortunately doesn't happen very often. Only 2 French speaking channels have them and one German. Therefore Inspector Barnaby speaks perfect French or German. I only heard his original voice once, when I was in the UK.

Of course we were still very behind the actual series, so yesterday was the evening of a big disappointment ! We saw a French speaking Inspector Barnaby with DS Ben Jones, (Troy was already gone) after having solved the murder of 2 and a half persons (the third one was only half dead and actually survived) announcing his retirement and presenting his "cousin" John as the new Chief inspector.

I like this type of crime stories, they are thrilling without wild shootings like in the American series, except the good old Colombo with his invisible wife and some other series which I liked too. But these CSI series where you see outhanging stomacs, vomit and other appetizing analysis on your screen while possibly you have your supper, wild shooting and blood almost streaming out of the TV and on the floor is not so much to my taste. Some of them are just limit, but I don't like the Miami red haired guy at all he always holds his head bias when he talks to somebody. I call him the bias head.

After having tried to solve the murders of around 273 persons over 14 years, Mr. Barnaby now retired. Why can't he do like the pope ? He never will retire ! I only hope that his "cousin" is a good replacement ! Mr. G. had calculated that there were an average of 3 murders per film. 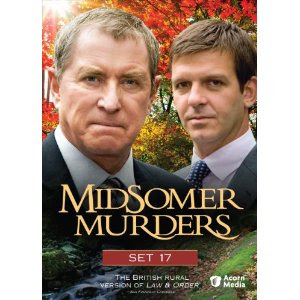 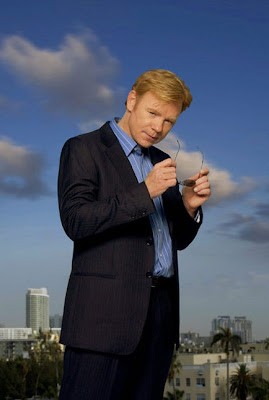 I think he badly needs a support for his head !
Posted by Gattina at 06:00 7 comments: