The rules for the prompt of this week are :

1. Grab the closest book to you when you sit down to write your post.
2. Open it to a random page.
3. Locate the first complete sentence on that page.
4. Use the first three words of that sentence to start your post, then take it from there–write whatever comes to mind.

This "Stream of Consciousness Saturday"is a bit special for me, but I follow the rules :

I try to grab the closest book while sitting down to write my post. But there is none. No books at all, because I prefer to read (if I have the time) the books in my Kindle.

Therefore I grab my Kindle and open a random page in the book I am just reading.  I locate the first complete sentence on that page.

I think I better knit my story in English ! Don't think I can't count until three, but if I take only three words they make no sense at all. Now I had the choice, either continue in French and maybe not all people will understand my "book" or translate and knit an English story around.

Translated the "three words" mean : After taking some notes on his suicide attempts ..... I never thought that he would really commit suicide. But he did ! He choose a nice strong cord, fixed it on a beam in the horse stable, put the cord around his neck, climbed on a chair, looked at the horses and kicked the chair aside. The horses didn't mind, they continued to eat their food, they didn't even look up. And he had taken care of them for so long and with so much love. In his last thoughts he had to realize that the horses were ungrateful, then his neck broke and he died. 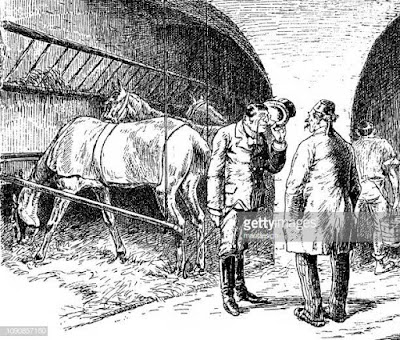 Police investigation after the suicide

As usual we started the week with our Scrabble game and as usual it rained. But later in the afternoon the sun suddenly showed up for a moment and as a proof I took a picture while Nicole tried to find a word which brought her a lot of points and little Isis watched us, also taking advantage of the 5 min sunshine. 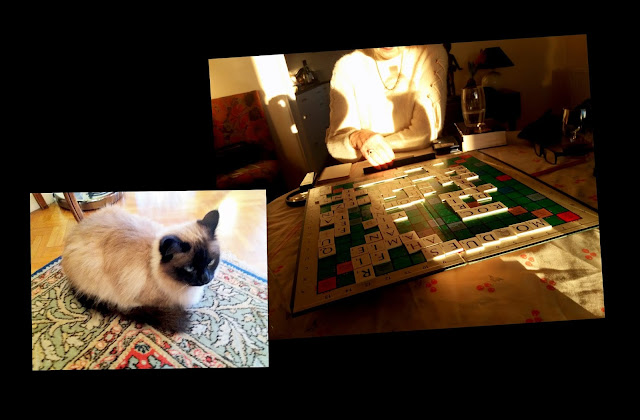 We all  complained that we were feeling so lazy and sleepy and found that it's really not right that in Australia it is so hot that people and animals die and here it is so wet that we are all sick with something. 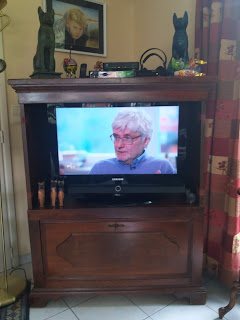 Since mid December this TV furniture was sitting in front of our house to be taken away.  I thought maybe somebody need some furniture, but apparently everybody has enough and finally the municipal special garbage service picked it up yesterday of course against payment. As I had to pay per cubic meter, we added all things we don't need anymore and my neighbor added a desk. At least that way it was worthwhile to come with a little truck.

The rest of the day I surfed on the computer, once I had written my posts or watched a bit TV.

Fortunately we had our painting course again, we missed it twice due to Christmas and New Year which were in the middle of the week.

The blue canvas was a pouring painting which I had done before Christmas and as it was so big I had hidden it on the terrace of the building with a plastic underneath not to color the tiles. Of course I forgot it and It was laying in the rain and sunshine for three weeks, until a kind person took it into her office and let it dry there. 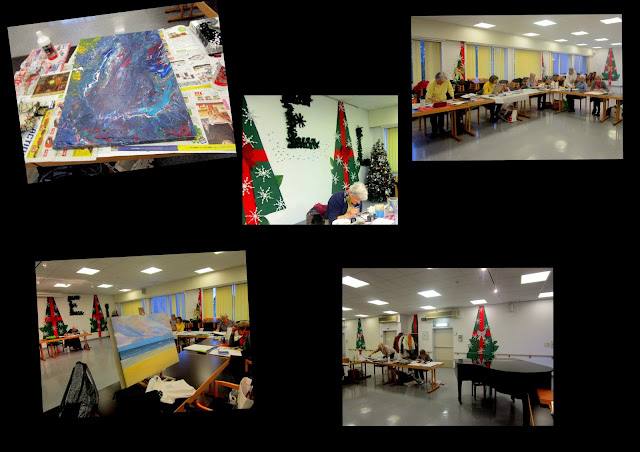 Now I have to repair it a bit, but still I was amazed of the good quality of the colors and the canvas, which had both been very cheap. There was still the Christmas decoration in our room and even a piano.

After class we decided to go to "our" Lebanese restaurant and were greeted like VIPs, we were six and he offered us a bottle of wine and after lunch a real good cup of mint tea like they drink it in Northern Africa. 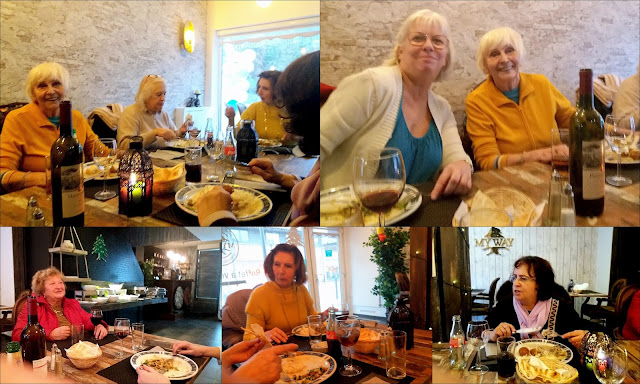 The food was delicious, so healthy and such a variety of vegetables, we had a lot of fun there and I guess the waiters too, because we were quite noisy !

With a full belly we said good bye to each other and returned home, where we had to digest first either with a little nap or a little TV movie. 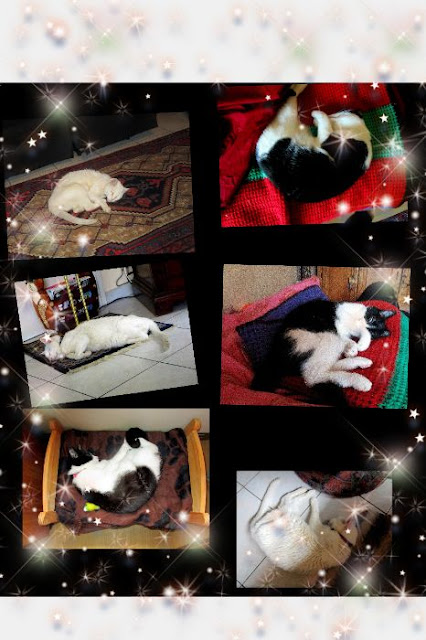 In fact I did what my cats do the whole day, they sleep and I hang on the sofa.

If I could I would send all our rain to Australia ! But that would probably be only a little drop in this huge country, but drop by drop also makes water. 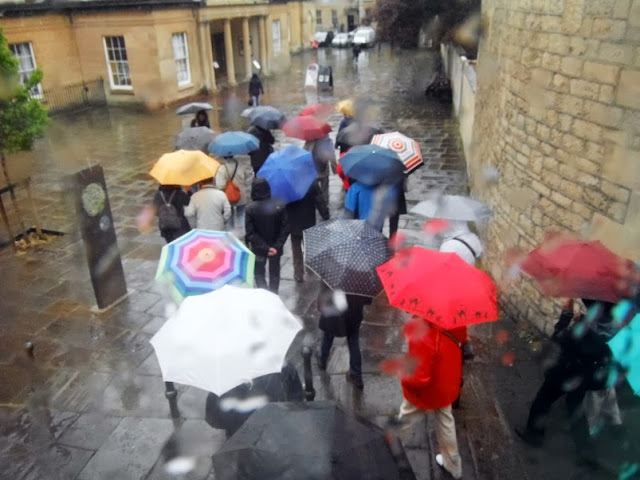 You can imagine that my happiness has limits for the moment when you see the two pictures above. We are all fed up of the rain, the too warm weather and we are not happy to see flowers starting to bloom in January.

I have no energy for nothing. Not even to travel, I hide myself behind the TV and try to escape the reality. Fortunately I am not the only one. My friends have the same feeling and we decided to get more together and try to find some happiness in going out, but not in the rain. For the moment the Exhibitions we have are rather depressing and have nothing to raise your bad mood ! Nothing is not really true because we have our Scrabble and also our painting courses.

I went with Mr. G. to the doctor because he too doesn't feel well and apparently besides a lot of depressions there is also the flu and an epidemic gastroenteritis around.

And to make my miseries complete, my grandpa cat has an eye infection.

If I could escape and go to Egypt as I did each year to fill me up with energy I probably would be full of happiness laying at the beach and looking into the blue sea.

Impossible for the moment so I have to wait another months.

A LITTLE PART OF OUR WORLD N°2

When you are locked in because of cold and misty weather it is nice to look at photos from your trips in the past.

This time I show you a canal in Amsterdam 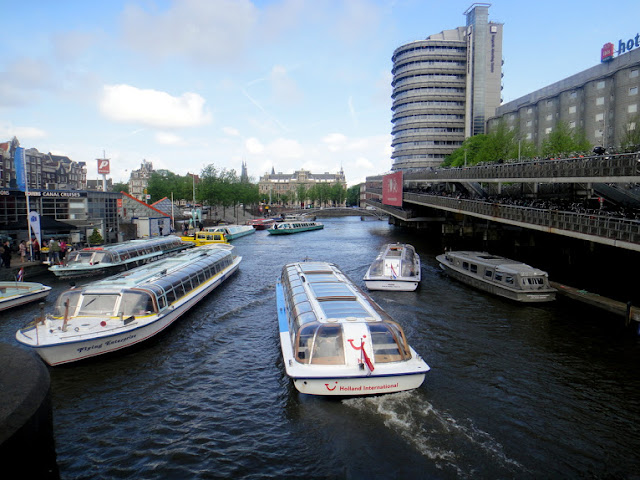 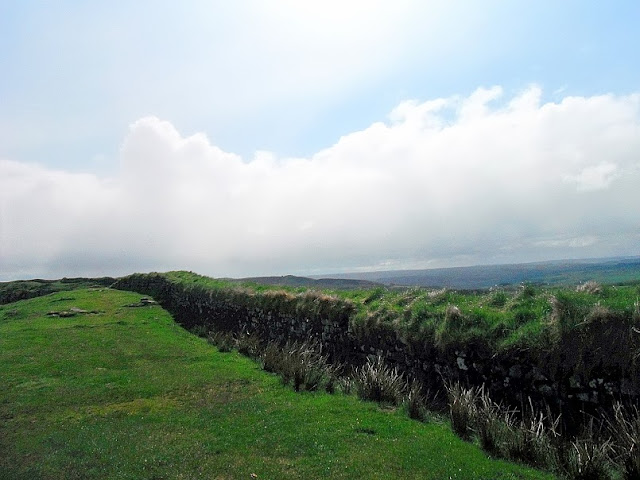 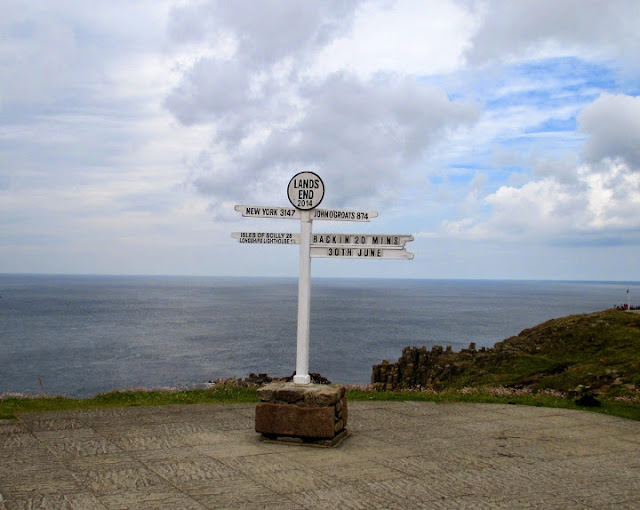 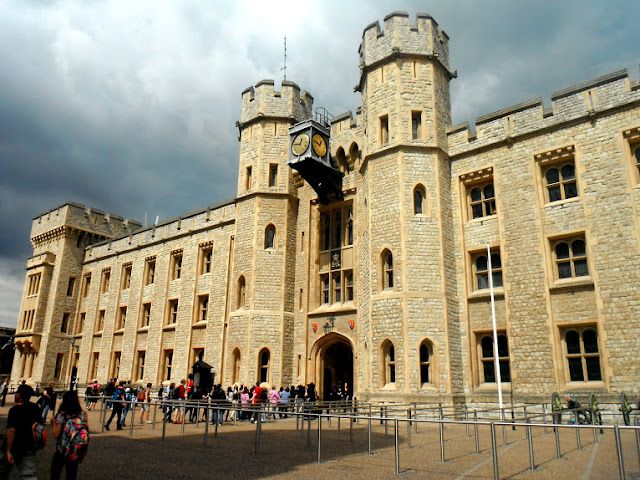 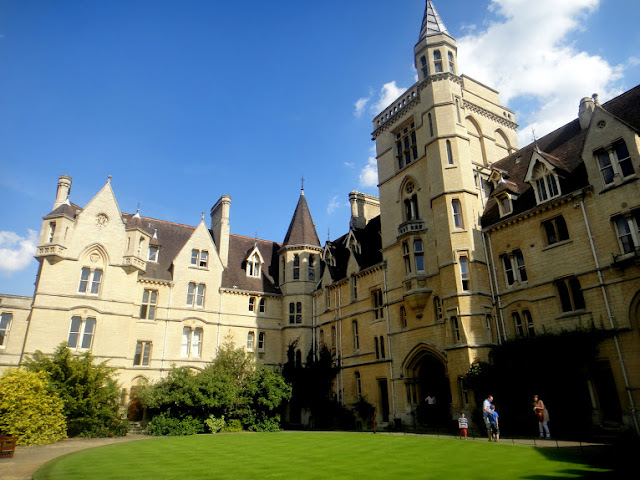 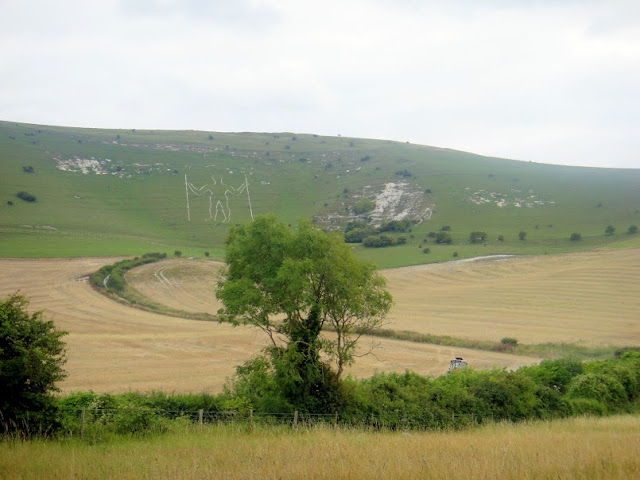 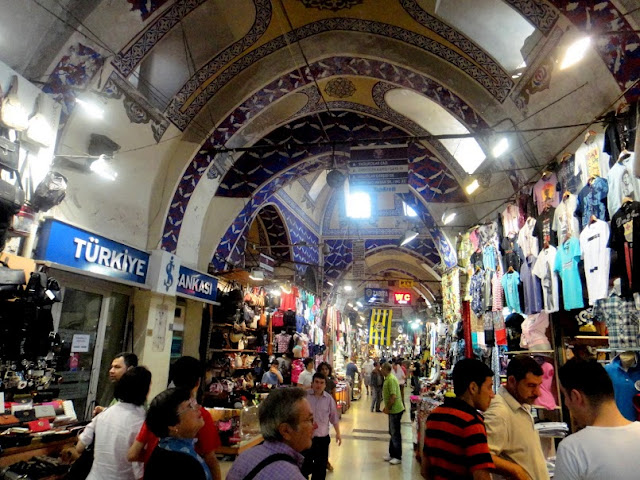 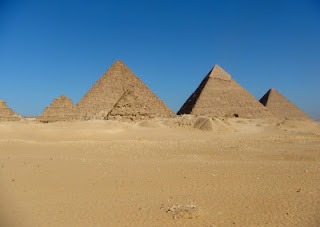 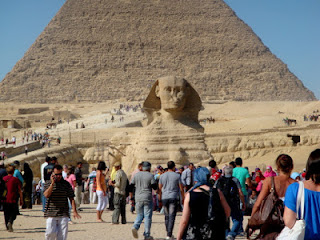 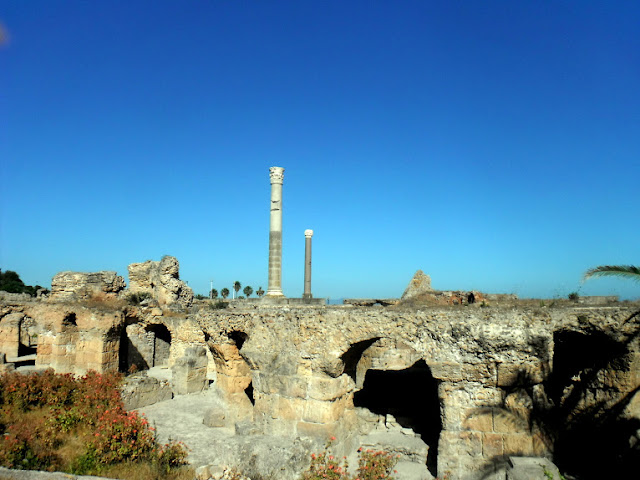 These pictures I have taken during my different travels. They are all on my blog COUNTRIES & CITIES 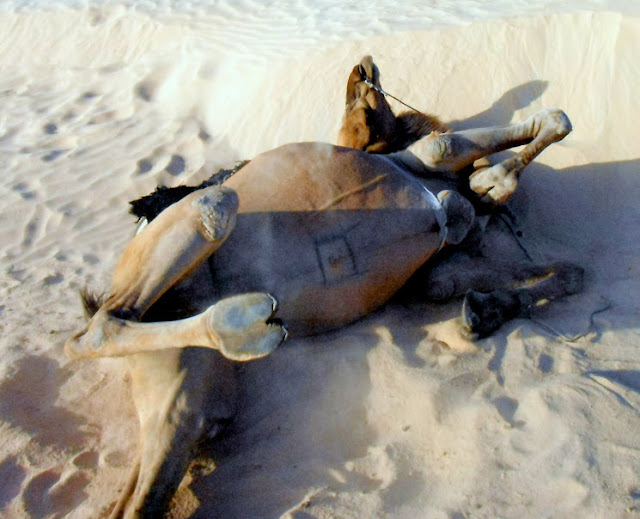 A happy camel rolling on his back ! 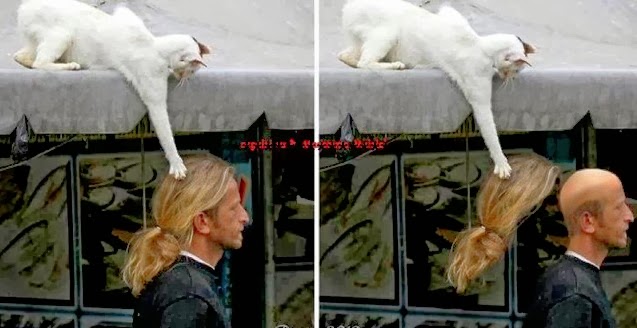 
On Saturday the city was full of "Sales" addicted people ! Fortunately I was not at all in the mood to buy something, I only went to the pet shop to buy pads for Arthur and litter sand. This shop usually full was nearly empty, of course they didn't give 30 to 50 %.

As Nicole lives nearby I thought I will have a coffee with her, but first I went to a store where I always buy my trousers or Jeans, because they fit on me as if they were especially made for me. I quickly stopped to see if they had the jeans I wanted and they had ! Exactly the same which I had damaged in my painting course they were full of a color scale and just to be thrown away. I was happy that I had found the same and even the same color and of course I couldn't resist to also buy a pullover which fitted with the Jeans. Then I stopped at Nicole's and we had our coffee, she also had found trousers and a blouse, and we decided that it was enough now for "Sales" !

In the evening somebody made a firework in the street, it was already around 10 pm and no New Year anymore,  I stormed out of the house and shouted to stop it, I was so furious because not only it is not allowed in our area but I heard the poor dogs bark ! Unfortunately the neighbor's son got my whole fury, he tried to interrupt me, but I just went on, until I realized that for once he was innocent, he only went to work !

I had shouted so loud that suddenly there was a silence and nobody did a firework anymore ! Mr. G. called me back, he had been already in bed and he knew when I am furious I am furious !

Sunday morning I had difficulties to get out of my bed, I was so lazy again ! But finally I managed to write my cat post.

In the afternoon we were invited at my oldest friend, I know her since 1963, each year she does a beautiful Christmas decoration, it nearly looks professional and each year also another color. Last year it had been pink, this year it was white and gold. 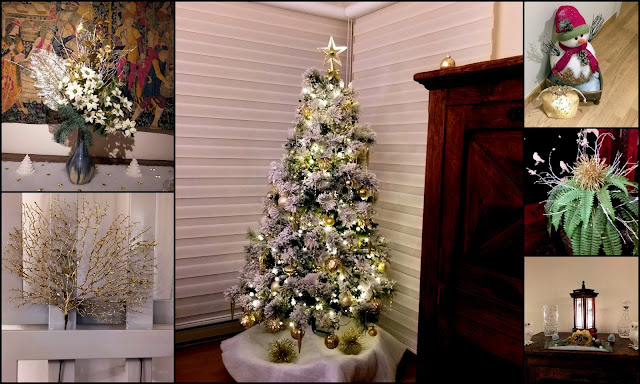 a part of the decoration, she had decorated the whole apartment 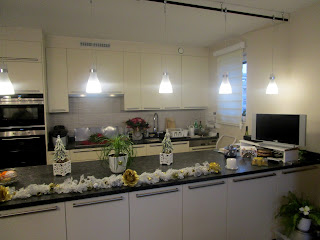 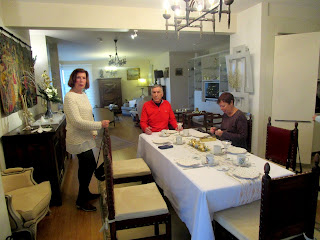 The kitchen and a nicely dressed table 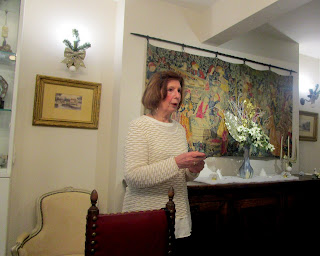 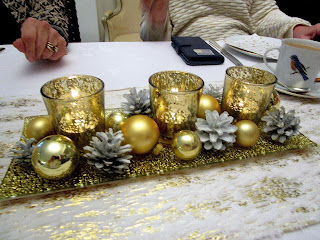 Nicole talking to Mr. G,  and the table decoration.

We had delicious cake and spent a nice afternoon together the time went by so quickly so that suddenly it was already 6.30 pm.

We said good bye and returned home and had spent the first weekend of 2020 very nicely.

Before going to bed we had a little snack, we still were full from the cake and watched a short movie. 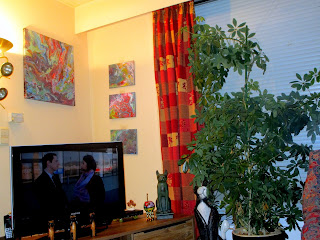 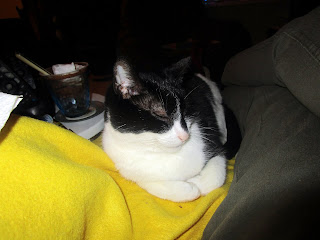 Miss Rosie was my lap warmer and behind the TV you see my last paintings.
Posted by Gattina at 07:00 10 comments: