Each day I eat 4 to 6 appels. I started with that, because over winter my belly became more round, not as my cats with fur, but with a padding. I also had noticed that my jeans had shrinked, it was a little difficult to close the button. As I love appels I thought I would replace everything I nibble when I watch my murders on the TV screen with appels. I peel them cut them in handy little cubes and put piece after piece with relish into my mouth, while Inspector Barnaby or Lewis, find new corpses. I avoid the CSI series, because I don't like to see dead people's stomac content even if it contains an eaten apple, while I nibble my little pieces.

I wanted to know a little more about this fruit and looked up in Wikipedia. The information was very useful, because I learned that an apple comes from an apple tree. "The apple is the pomaceous fruit of the apple tree". I also learned that the appels from an apple tree (not from a pear tree ) have their origin in Turkey where Alexander the Great is credited with finding dwarfed apples in Kazakhstan in Asia in 328 BCE and apparently let them grow in his country. From there the appel reached the whole world and was brought to North America with colonists in the 17th century.

In Christian tradition it was an apple that Eve coaxed Adam to share with her. Lucky man. As a result, in the story of Adam and Eve, the apple became a symbol of the fall of man into sin, and sin itself, probably because in Latin, the words for "apple" and for "evil" are similar : mālum "an apple", mălum "an evil". This may also have influenced the apple becoming interpreted as the biblical "forbidden fruit". The apple as symbol of sexual seduction has been used to imply sexuality between humans, possibly in an ironic sense. I swear this is not the reason why I love appels.

Somebody has told me that you can eat as many appels as you wish they don't have any calories which would encourage your belly to expand, and there is also the proverb "An apple a day keeps the doctor away" ! 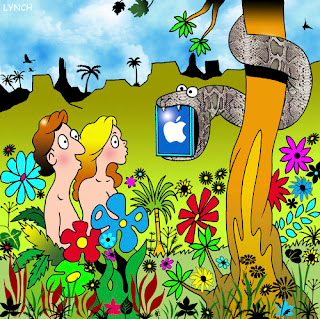 This is a fun apple post! I can picture you sitting there eating away on apples! I bet all that cutting uses up calorie, too! The "guaranteed delicious" apple cartoon made me laugh.
I like honey crisp.

My dog would love visiting you. I only let him have one apple a day. He swears they keep the vet away! :-)

Very interesting facts about apples. :) Indeed they are much better than any diet shakes.

I'm an apple lover, too. Especially the Jazz and Fuji varieties.

I don't care for all types of apples - I like the sweeter ones but i always like to nibble cheese with them; so that puts an end to healthy eating.

Gattina, did you know that apples and roses are in the same family?? This is the perfect "A" post! A is for Apple!!

I love apples I used to have a bushel on my porch where I would lie and read a book and eat them
They were just for me. Those were the good ol days :)

I like inspector Lewis too! But my newest addiction is Doctor Martin (also an English series) Can you view it in Belgium? Wish I was more disciplined than you to eat apples!

I can see why anyone wouldn't want to eat during the csi....a lease they don't have smell factor...talking about apple I just googled in “apple salsa” does sound good and I want to give one recipe I found a try. I won't say any more it might be part of the photo hunt this weekend...I was having issues with my computer so I couldn't be part of the hunt...coffee is on.

that was really interesting. I didn't know about the similarity of the latin words. Cool. Thanks for sharing that.

I like apples too. I always take a couple to work to eat in my break time. They keep me going through the day :)

Apples! Yum. There are so many varieties to try. It is fun to learn what different ones are used for. Some are great for pie filling, some are perfect au naturel! I love to bake golden delicious apples, they really are delicious!

What a perfect, healthy way to eat!

Fiber, vitamins and yummy to boot!

One of my favorite times of year when I lived in Ohio was the autumn...we would pick bushel after bushel of apples...oh, the house smelled heavenly and there is nothing as amazing as eating a just-picked crisp apple chilled by the autumn air!

This was such a cute start to Alphabe-Thursday!