1. Our usual aqua gym female trainer was on holidays instead we had a young man in his late 20th. He was quite amusing and hopped with us vintage ladies in the swimming pool. Although his name was Jonathan, I called him Mr. Yes for myself, because he always shouted "yesssssss, yesssss" or "go, go," which to you doesn't sound strange but in a group of only French speaking ladies it sounded  very interesting and that's what he probably wanted to be. I thought I should speak English with him, but then I changed my mind, in case he couldn't speak English and I didn't want to embarass him. Poor boy did his best.

2. Now that spring has officially arrived we have a potpourri of weather. It hails, then rains, then snows and it is cold just above 0°. The sky is grey and dull and this weather takes away all energy. And people are all tired ! Fortunately I am retired so it doesn't matter that I fell asleep watching TV at 12 after I had eaten and suddenly it was 3 when I woke up ! That has never happened ! Nicole who normally should come called me at 4 to say that the same thing happened to her only she just woke up. So we both were not in a mood to go out and get holes in our heads with the hail.

3. My deep freezer after defrosting and cleaning was empty as my wallet so I went to Picard the store specialized in deep frozen food and bought all kind of mixed vegetables, etc and now it is full again. My cats also suffer from this dreadful weather and have fallen in winter sleep again.

4. For our holidays in Turkey, Nicole as a Belgian needs a visa, I don't need one with my German passport, which is not logical as we are supposed to be real members of the European Union. Fortunately you can do this online. So we first met in our Chinese restaurant and had a delicious lunch, with the result that we changed our minds and instead of filling out the paper with the computer at Nicole's,  we decided to go to a new hairdresser in the Carrefour store. This is female logic. 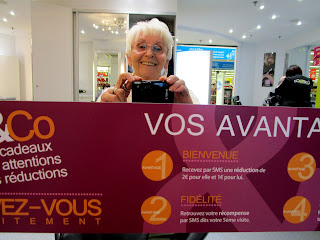 We had our hair cut and laughed with the girls and really had a nice time. It was the first time since at least 10 years that I had changed my hairdresser and was quite happy with the result. Could have been worse ! With our new heads we then had a coffee and met a friend of Nicole's and started to chat. Suddenly it was 5 pm and I had to return home to finish my blogging !

5. The lazy week continued only interrupted by my painting course where some had come back from holidays and told us their adventures. The afternoon I spent at my computer, it hailed or snowed again outside !

more participants at Susanne at Living to tell the Story.
Posted by Gattina at 06:30 5 comments:

A friend in my painting class told me a rather strange story about her little grandson. Having a grandson is nothing special but in this case it is.

Jeanine has 3 children one girl and two boys. They are all grown up and out of the house. Her daughter is married and wanted badly a baby since several years unfortunately without any success. Then came the confirmation of the doctor, she can't have any children. A catastrophe for her.

One of her sons was in a relationship but they had no intention to have a baby yet. The other was just 21 and had a girlfriend of 17. And as it happens, those who don't want children they get them without any problems, and sometimes very quick.

This happened to the 21 year old boy Philip and his 17 year old girlfriend Lisa. She got pregnant ! A catastrophe, both far too young and both studying. There was only one solution ... an abortion.

When Jeanine heard about the pregnancy of Lisa, she had the best idea of her life. She invited the girl and talked to her and asked her if she would agree to have the baby. First the girl was very reluctant to the idea, and her son too, but there was the sister who couldn't have children and she was ready, and eager to adopt her brother's child together with her husband and raise it as their own.

After some hesitation, finally Lisa agreed, and after 9 months she gave birth to a healthy little boy. Immediately after the birth she gave it to Philip's sister who from birth on now had a little boy. She and her husband were so happy and of course my friend too. Not only she had a healthy grandson but it was also her own blood.

Today they all live in harmony. The biological mother has disappeared shortly after the birth. The little boy is meanwhile 4 and happy with his parents. The biological father considers him like a nephew and behaves like an uncle.

A strange story but with a very happy end ! 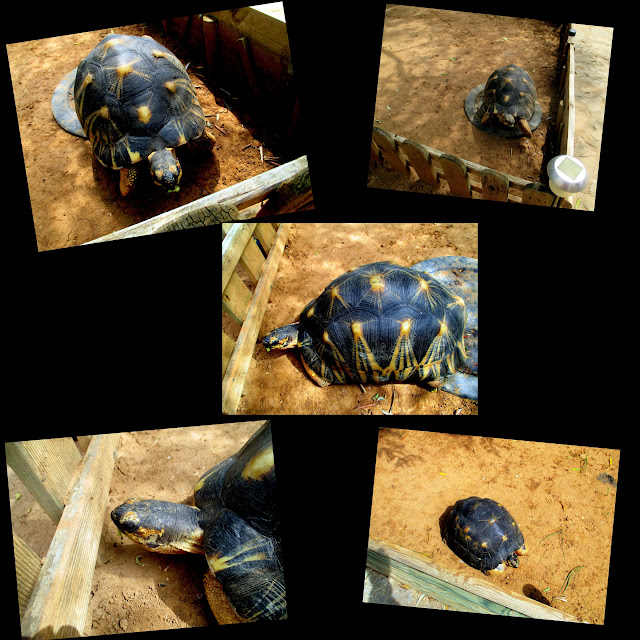 These two turtles are very big, they weight 13 kgs (29 lbs) are very friendly and sociable. When the owner called them they arrived ! Amazing ! They stem from the Réunion island, and live now at the French Rivera.

While I was on holidays at the French Riviera together with my friend we went to visit Marseilles, which I had never seen. To see a maximum in a little time, we took the sightseeing bus and from there I could shoot the following pictures. Read more here ...

I had made plans for the weekend according to the weather forecast. But either the weatherman behaves like a politician and changes his mind all the time according to the mood of what people want to hear, or he loves in my case the 2000 and something sorts of beer a little too much ! 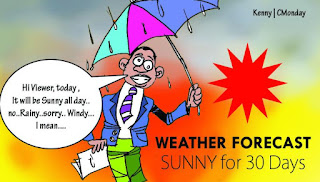 In any case instead of the expected snow in the Ardennes and hail in our region, we had a rather sunny day with some fluffy clouds from time to time. But it was too late to change my program so I did laundry, turned off the deep freezer and carried the content in a cool box over to my neighbor's deep freezer to stock it there until mine was defrosted and cleaned.

I did a lot of blogging too and we even put Oscar the lawn mower robot out before the hail or rain started. Nothing started !

I was fed up staying home and called Nicole who was in the same situation. We decided to have a coffee in our new discovered Brasserie at the Mont St. Jean farm. 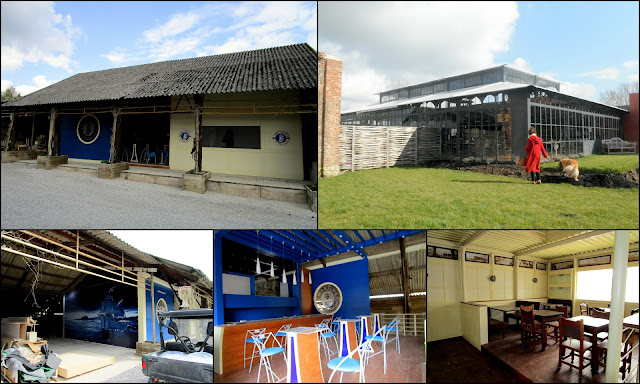 When we arrived to our big surprise they were busy to transform one of the barns into a bar and a little snack. From what we could see it looked rather nice. As it was Saturday I couldn't ask anybody what they really built there and the waiters in the "Orangerie du Prince" didn't know nothing.

We had our coffee and made plans for the next week. When we left still no weather catastrophe !

Sunday I went with Ilona to a Garden Center store, which is open on Sundays, usually all other shops or supermarkets are closed which is very boring. We both bought a cute stone cat figurine for our gardens and Ilona some earth. We then had a coffee together before I returned home.

And .... it rained and hailed ! The weatherman was only one day late !