1.To me personally nothing special happened, except that I am lazy and tired, but I think that is the season ! 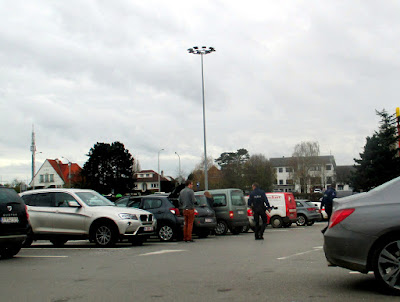 I went for lunch with Nicole to the Carrefour "Lunch Garden" and for once we saw police there who controlled a car. But that was it, there is no more police around than usual.

3. We are living 15 km (9 miles) from Brussels, and I see what happens in Brussels on TV. My cleaning lady told me that around the stations, tubes and official buildings there are many policemen and soldiers walking around. A football (soccer) game had been canceled very much to the anger of  different husbands. (not mine, he only watches Formular 1)

4. Meanwhile I have got the flight tickets of our trip to the Red Sea in Egypt and Nicole and Chantal had invited us for cake and coffee and we checked our tickets and dreamt of the forthcoming holidays, 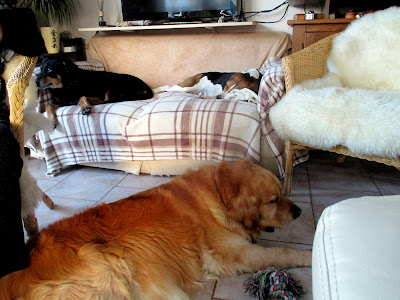 while Charlie had collapsed on the carpet and Chantal's two female dogs weren't impressed at all by this big dog. 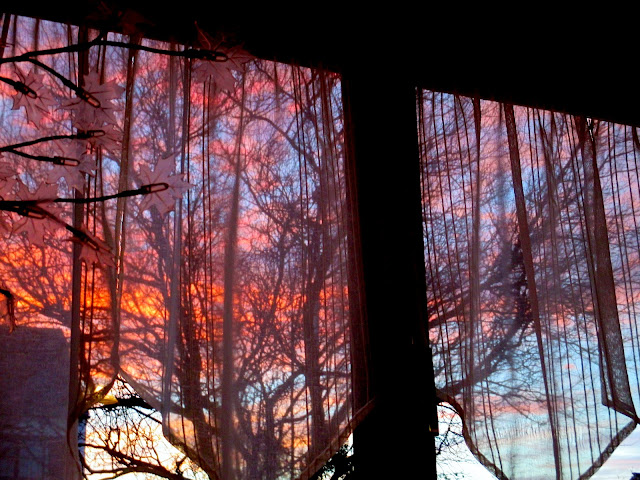 Before it became dark, now already around 5 pm, I took this picture through Chantal's window. The sky just looked so beautiful. Shortly after that, when we drove home it rained !

5. Of course the main discussion in my painting class were the Paris attacks, and we all pitied the people living in Molenbeek. Some of my classmates had friends living there, but in their area it was very quiet. The police searches were only in one street. On TV you could believe that the whole area was in war !

Between 2,000 and 2,500 people, according to local police, took part Wednesday evening in  Molenbeek in a rally in memory of the victims of the attacks in Paris on 13 November.

On the town square was drawn in large and chalk the word "Molenbeek", whose letters were covered with candles by the public.

"We decided to organize this action to go against the media who are obscuring Molenbeek. 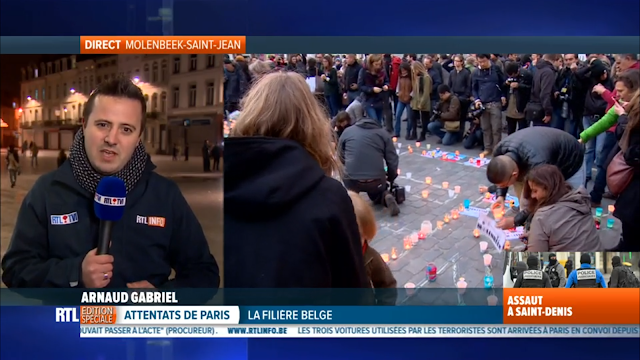 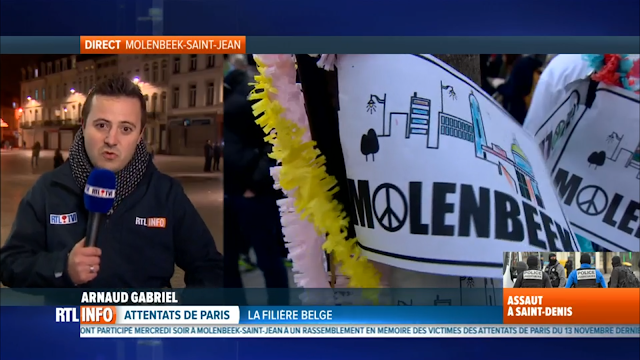 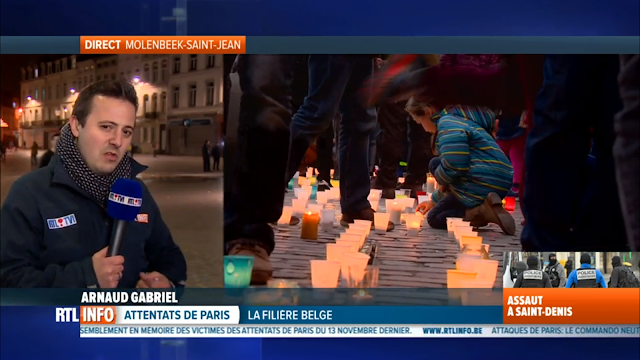 The Molenbeek population is very sad and upset about what happened in their community. A French Journalist Eric Zemmour had even suggested to bomb Molenbeek instead of Syria ! Which of course made a big scandal !
Posted by Gattina at 08:24 5 comments: 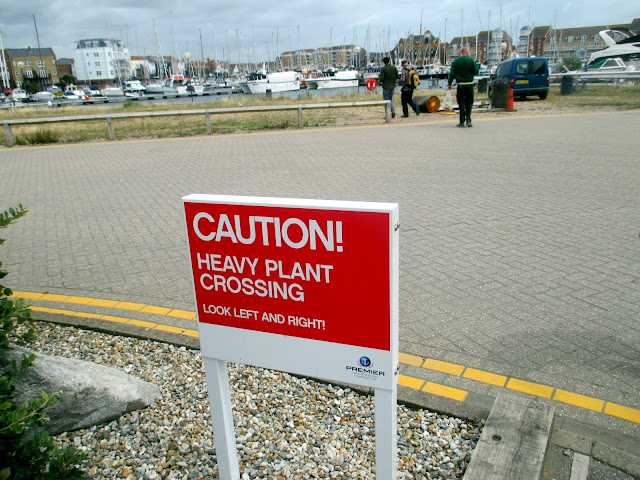 SEARCHING FOR TERRORISTS IN BRUSSELS/MOLENBEEK

When the Russian airplane crashed, everybody told me not to go to Egypt. And now a few days later I can't even go to Paris. We are asked to cancel all trips to Paris until further instructions.

Of course I have followed as you have probably too, the terrorist attacks in Paris. But today I got the impression that we in Brussels are getting more and more involved and especially one area,  Molenbeek-Saint-Jean which is one of the nineteen municipalities located in the Brussels. It is one of the most densely populated municipalities in Belgium, with over 16,000 inhabitants per km2.

At the end of the 18th century, the Industrial Revolution and the building of the Brussels-Charleroi Canal brought prosperity to Molenbeek, through commerce and manufacturing. Attracted by the industrial opportunities, many workers moved in, first from other Belgian provinces and France, then from South European, and more recently from East European and African countries. The growth of the community continued unabated throughout the 19th century, leading to cramped living conditions, especially near the canal.

The town became known as “Little Manchester” and its inhabitants lived through an extended period of misery. The industrial decline, which had already started before World War I, accelerated after the Great Depression. In some areas of the town, the ensuing poverty left its mark on the urban landscape and scarred the social life of the community, leading to rising crime rates and pervading cultural intolerance. Various local revitalization programs are currently under way, aiming at relieving the most impoverished districts of the municipality.

Over the past couple of decades, a substantial Muslim community of mainly Moroccan and Turkish ancestry has established itself in Molenbeek, very visible (people, shops, cafés) in the oldest neighbourhoods of the commune, near the canal.  There are several mosques in the commune, including a Pakistani one, and a Shi'a Turkish mosque.

Switching on the Television at noon, I was really glad to live outside Brussels what I saw was terrifying. It lasted nearly the whole morning. Police had invaded Molenbeek to look for the still missing Paris terrorists as there are several sources indicating that they came from Molenbeek. 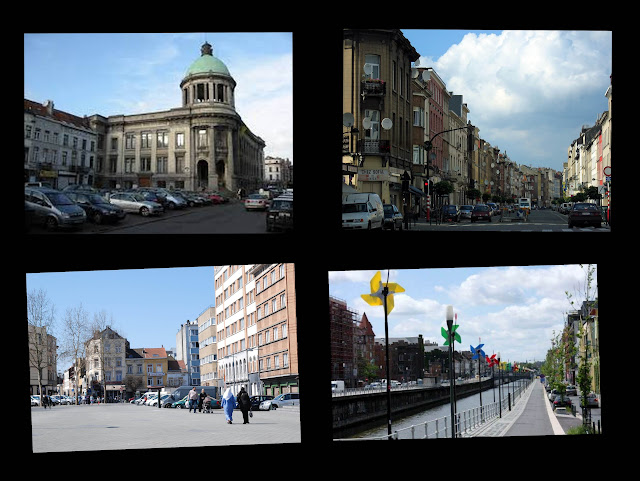 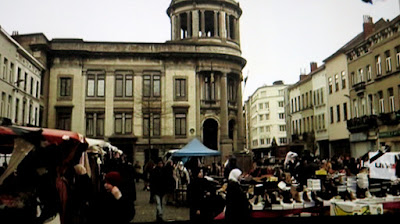 with its very nice weekly market

Molenbeek has some very nice areas and beautiful old houses. Nobody could suspect that there was a breeding nest of terrorists in this municipality.

And that's what I saw, and it happened only a few kms far from my home 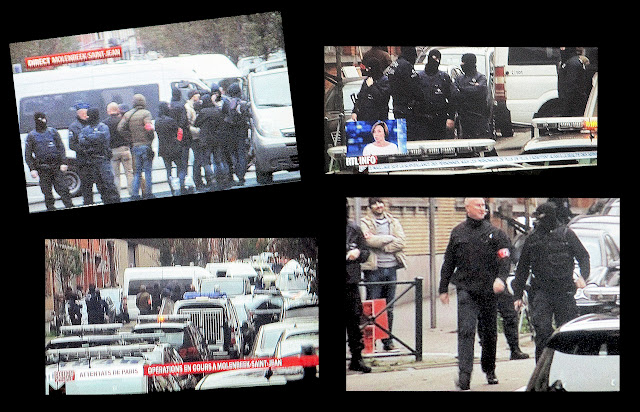 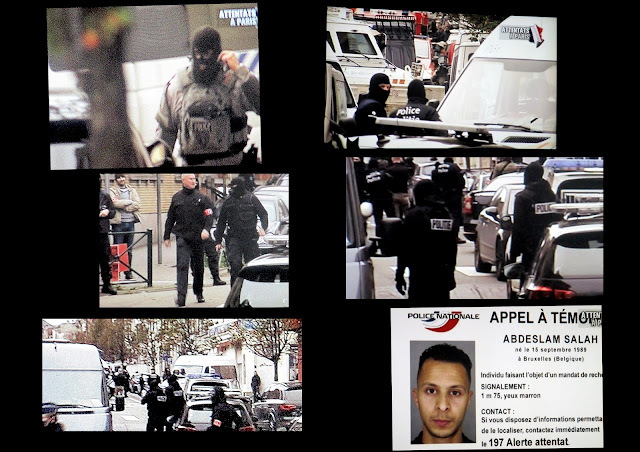 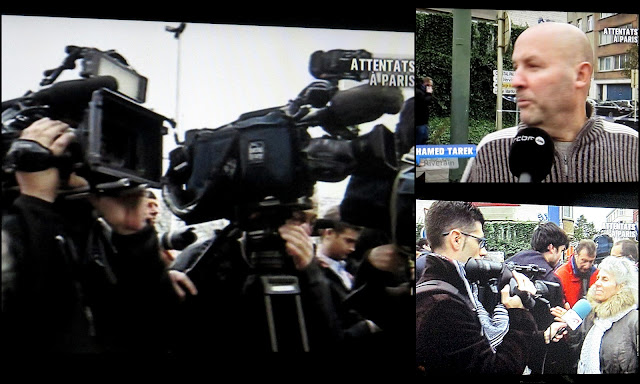 Journalists from all over the world were there and also interviewed the population. They are all shocked. They just can't believe that these inconspicuous men had committed such terrible crimes. 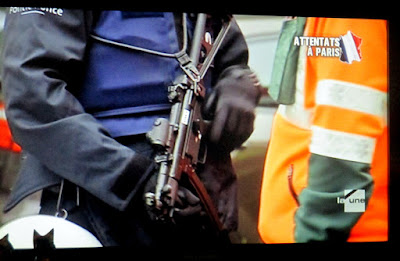 Quite impressive for the locals

Teachers tried to explain to the kids what happened, which was not an easy task.

It must be terrible for Molenbeek's honest population what's happening in their municipality !

This weekend we celebrated the 5th birthday of our grandson Toby, three days early but we had to choose a weekend.

While we waited for their arrival on Saturday morning we watched the news and were shocked about what had happened in Paris.

First thing of course for Toby was to unpack the gifts ! 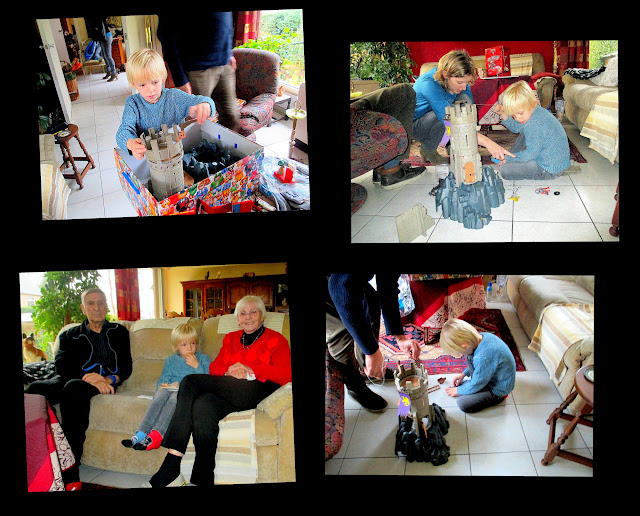 In the afternoon, my son had invited Toby's little Belgian friends to celebrate the birthday in the kid's factory. 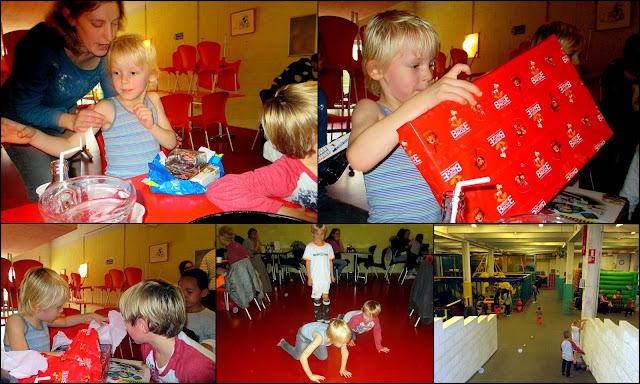 Of course he got again a lot of gifts but then they were running and jumping around and had a lot of fun, while we adults were sitting in the restaurant. 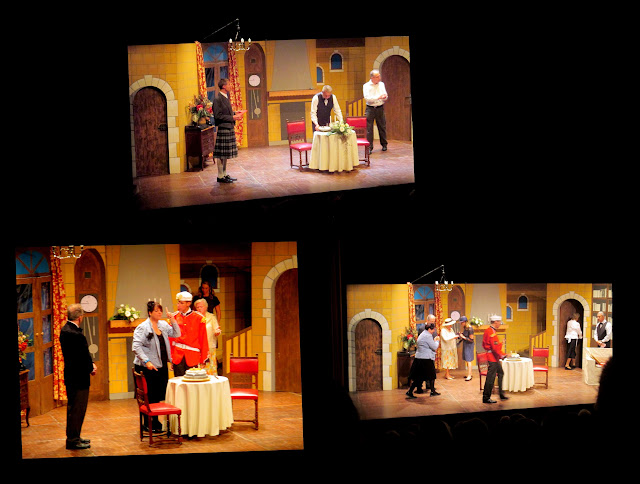 I had theater tickets together with Nicole and my neighbor, so I had to leave them from 5 to 7 to see the play. It was really very funny and we enjoyed it very much. It was the story of a couple who had killed their rich husbands/wives, 5 for both and then they had married and tried to kill each other. It was hilarious.

Mr. G. had prepared Spaghettis, the favorite plate for each kid ! 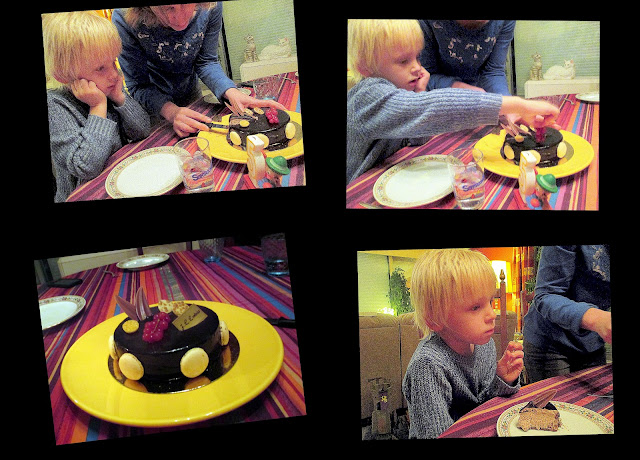 and then came the big moment, blowing out the candle and eating the birthday cake !

What a day for Toby but also for us, so we went to bed really early ! 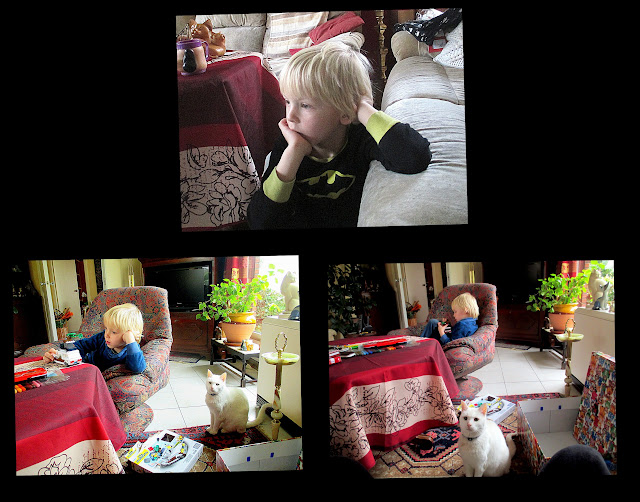 On Sunday there was a very strong wind and it also was wet. So we stayed home, Toby watched a bit TV and played with his new toys, while Arthur did the survey.

Then they had to leave the weekend was over only too quickly. 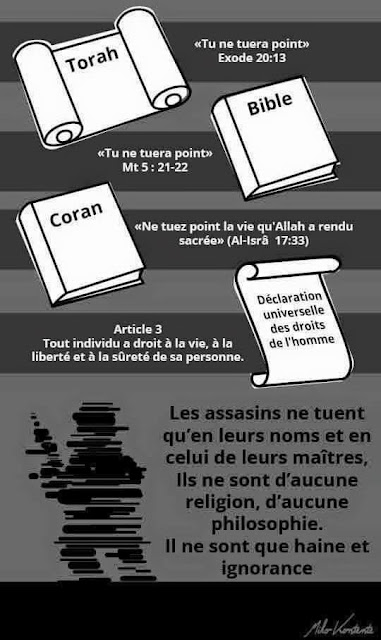 Murderers kill in their names and that of their masters, they are of no religion, no philosophy they are only hatred and ignorance 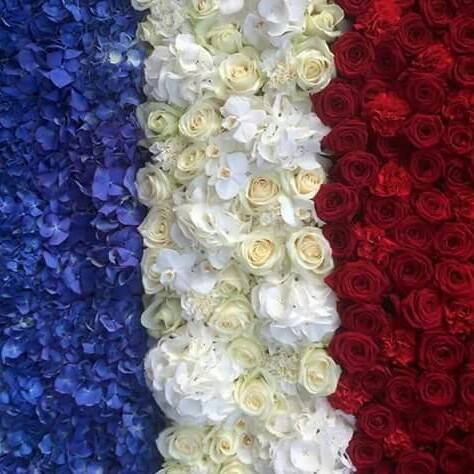 Words cannot explain the drama which happened in Paris We are all concerned !
Posted by Gattina at 09:48 5 comments: