Another week went by and it seems to me more and more quick ! 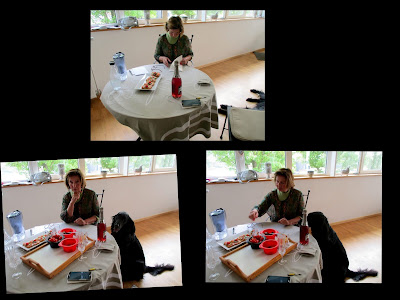 This time we had to dress in thick pullovers and play scrabble inside it was only 17 °C  ! Last week the temperature was almost double and we could play outside. Dog Tosca saw our coffee break arriving and was very interested in the salmon toasts. This time we had a salty break with cherry tomatoes, olives and toast. We were only 3 because the two others were on holidays ! 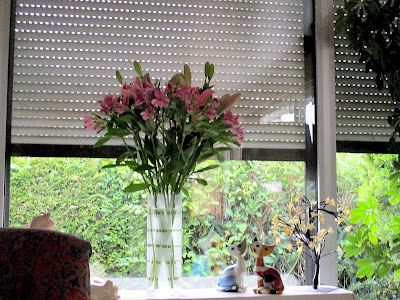 The bouquet I got for mother day looks still beautiful and fresh ! 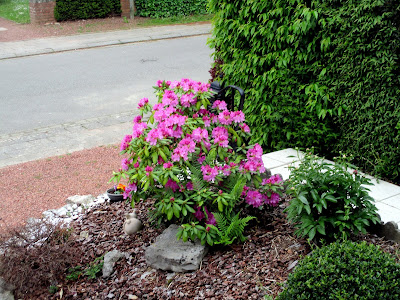 Despite our rollercoaster weather the rhododendron bush is blooming amongst my fake flowers in pots ! It's nice to have both, the most important is, that I don't have to work ! 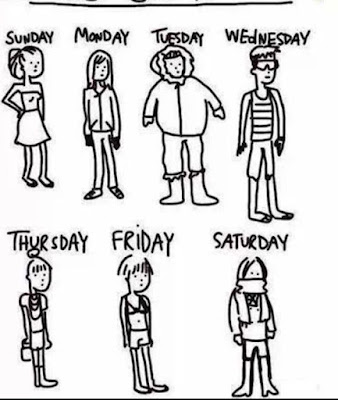 This is the truth ! Summer, winter, spring and autumn clothes are all hanging all together ! Useless to select them per season ! Yesterday I had to change 3 times, very cold in the morning, very warm in the afternoon, and cool in the evening ! We still have the heating timer set on 20° ! 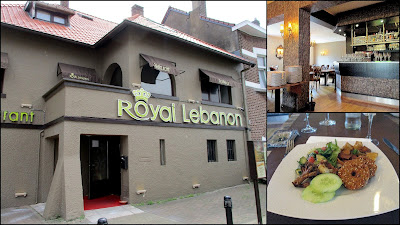 We were three to have lunch in this Lebanese Restaurant. I had already eaten Lebanese plates, and was disappointed of what was on offer here. It was presented like a buffet and you could eat as much as you wanted, but the food didn't taste good at least for me. I was surprised that they served carrots with peas in the main course !

And another week ended. 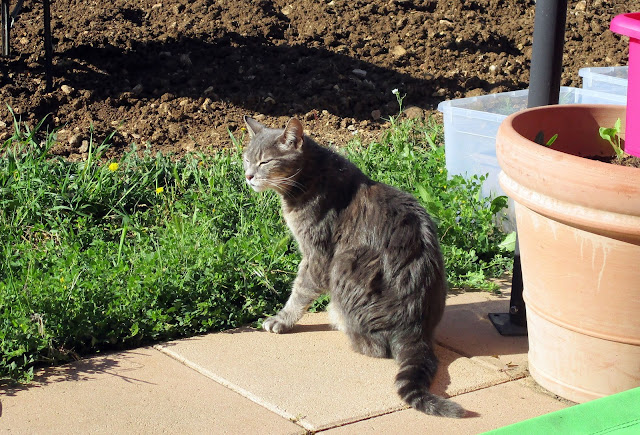 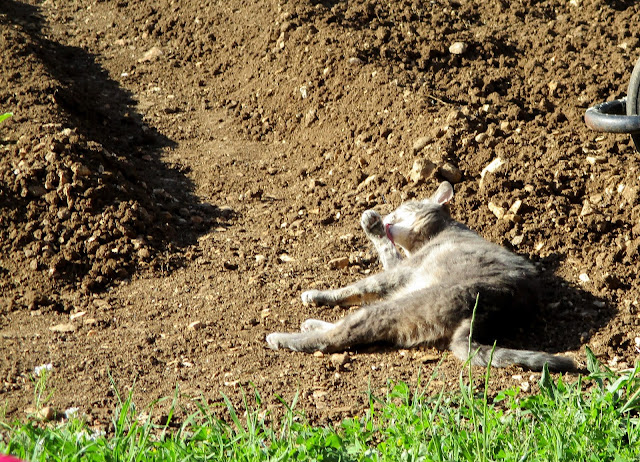 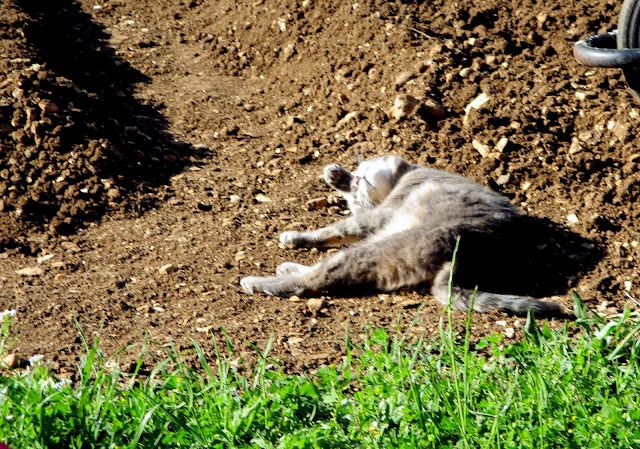 1. What would you say is your biggest day to day challenge?

Get out of my bed when it is so grey and cold !

2. May 16th is National Biographers Day. What's a biography you really enjoyed reading? Is this a genre you read regularly?

I like biographies very much. I think the last one I read was the one of Diana Princess of Wales

3. How important is keeping a clean house? Do you need to de-clutter your life?

I think it's normal to keep a house clean, but not sterilized. There is nothing to de-clutter in my life actually, I have done that long time ago.

5. What's surprised you the most about your life or life in general?

That's a difficult question, because nothing surprised me in my life or life in general, it just all happened and I am still here !

I try to put my shopping list together, and think if I need something else. I always forget something !

A VILLAGE AT THE LION OF WATERLOO

Ever since the Lion mount site had been renovated for the bi-centenary of the Waterloo battle,  there are no Waterloo inhabitants going there anymore because the city had had demolished the old charming houses, the restaurants, the wax cabinet and only one new built restaurant was standing there now. It has become dull and boring for those who want just a drink and not going into the deepness of the battle history.

Therefore the city organizes events on the site to attract people. Here a "village" was built and I have never seen so many people since the bicentenary three years ago, where I was a volunteer. 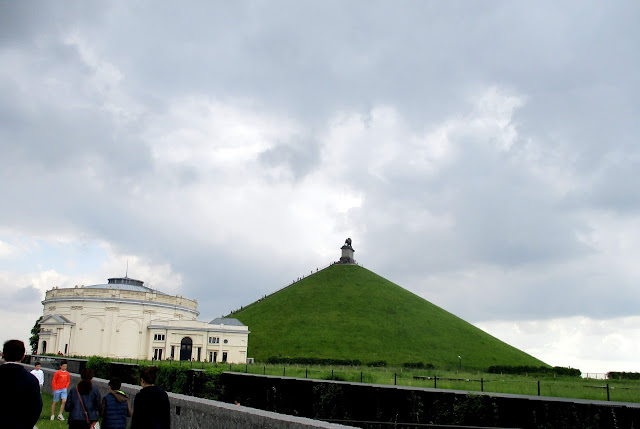 I think the lion was quite happy to see so many people and not only empty fields ! 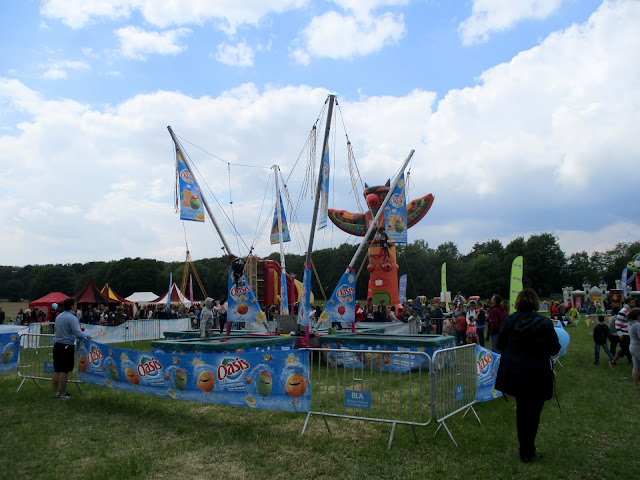 Long lines of visitors were waiting to get a ticket for an attraction. 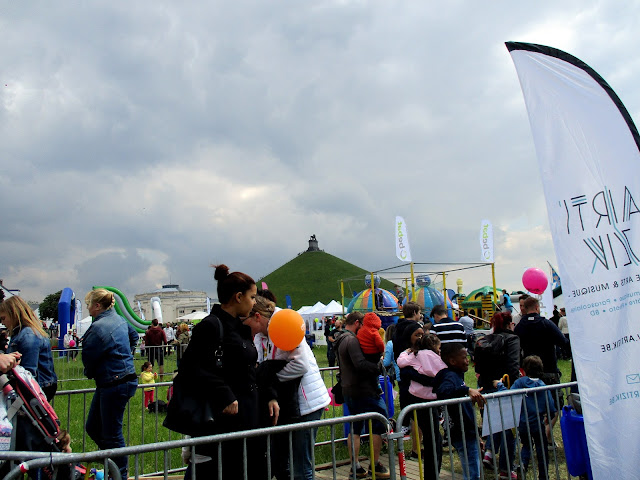 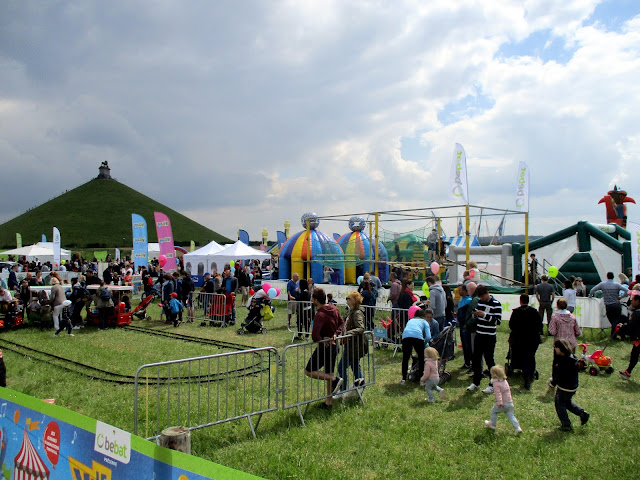 It really had a lot of success 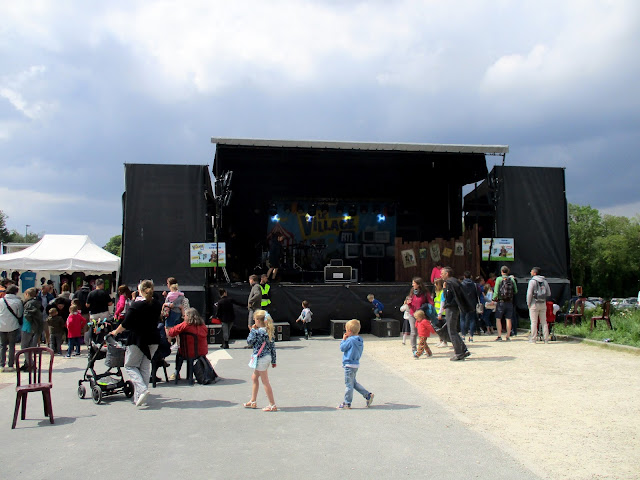 There was life music too, when I was there it was just the break. 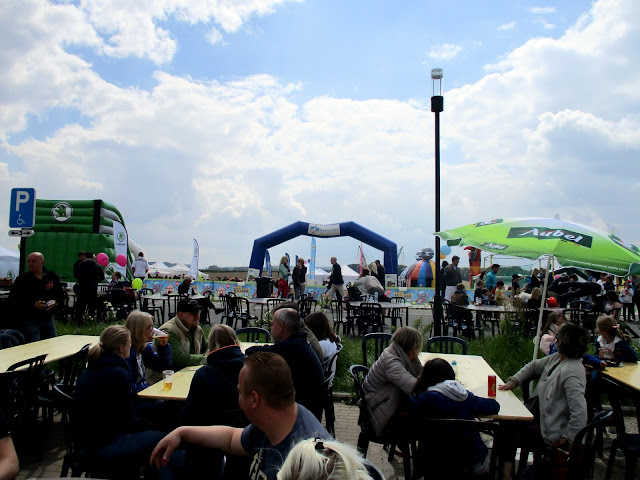 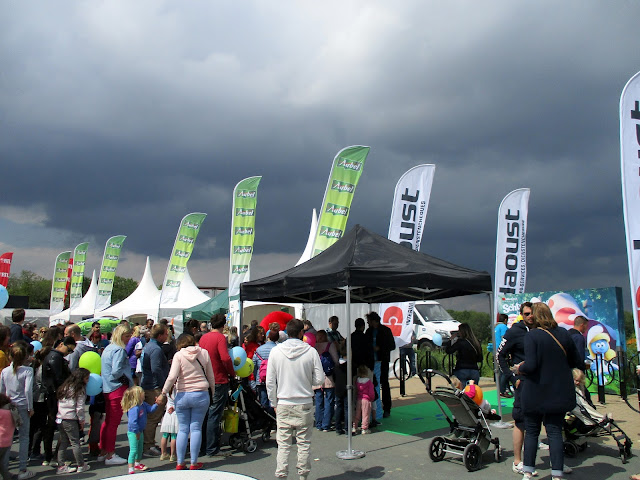 Despite the threatening sky the sunshine remained 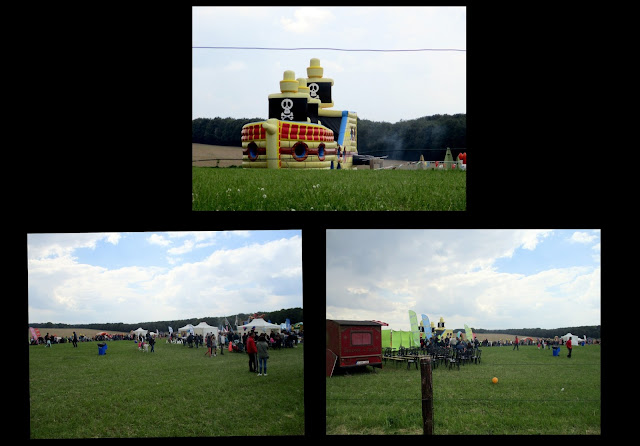 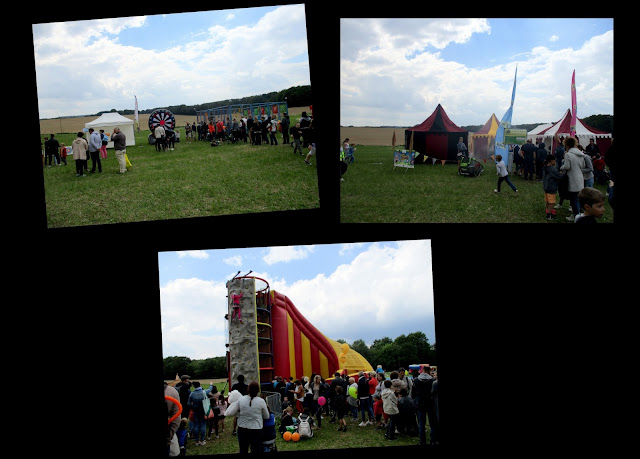 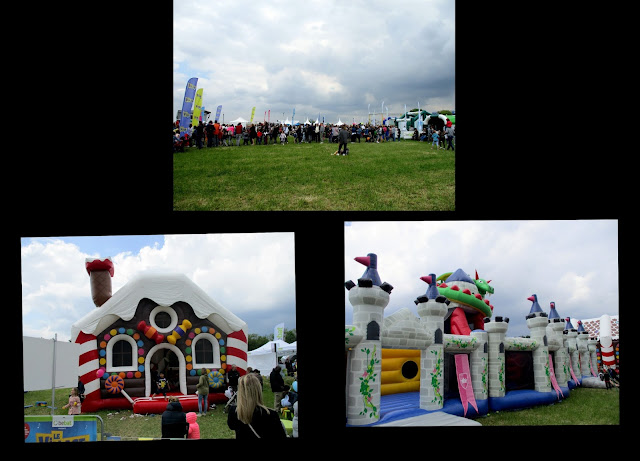 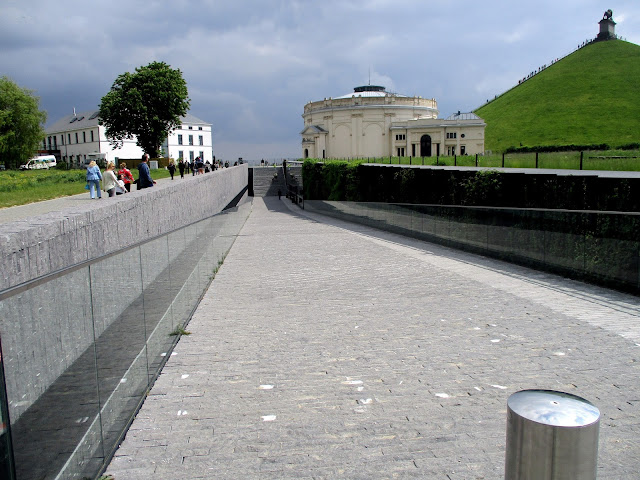 The way to the underground museum 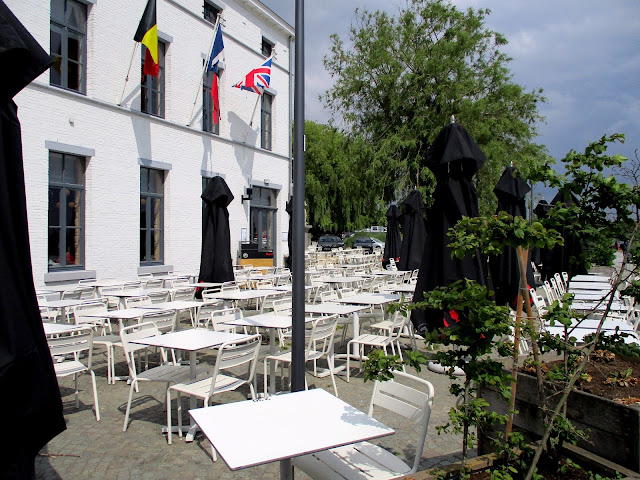 While the site itself was totally deserted.

I think if the city wanted to earn money, they choose the wrong way. Not everybody is an intellectual !


Each week the people of Waterloo are invited for the Waterloo Apero, in the park of Waterloo. There are deckchairs little tables and you can eat and drink while meeting people from Waterloo and from our Facebook group "Vivre à Waterloo" 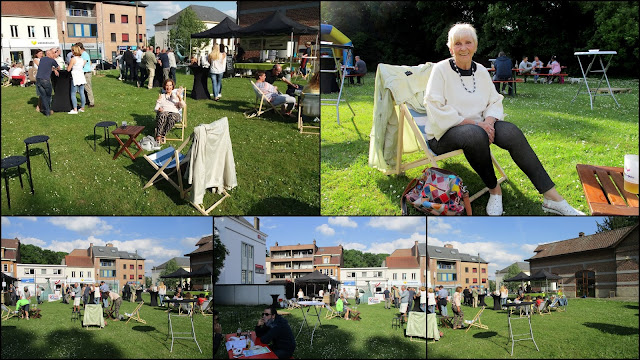 I went there with Nicole, the sun was shining and we all had a lot of fun. It felt like a little village gathering. The weather was also perfect. Next week we certainly will return ! 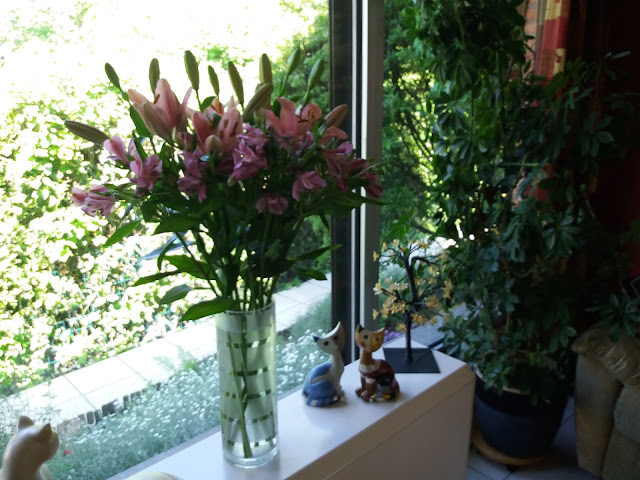 For Mother Day I got this beautiful bouquet from my son who lives in Amsterdam. He also called me and wish me all the best and grandson Toby showed me what he had done for his mummy ! 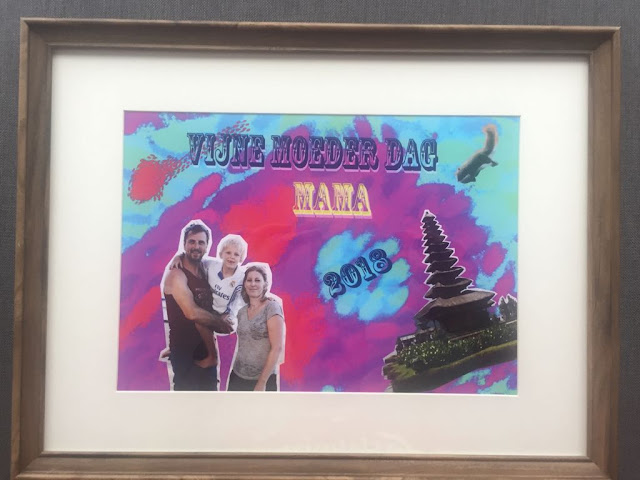 I thought how over the years Motherday has changed. When I was that age, we made things for motherday at school which mostly were horrible. I remember that we all got a new grey cleaning rag and cross stiched a text with read thread ! There was not much to offer so shortly after the war in 1950. My mother put it in the bathroom until it disappeared. When my son had this age it was the same, they crafted something at school for the mothers, which mostly was completely useless but far more sophisticated then my rag, I also kept it for a while and then it also disappeared !

Today it's different ! Toby had made composition on the computer with photoshop and his father had framed the artwork. He had sent me a photo and I really was amazed he surely had an artistic vein !