A CORPSE IN MY KITCHEN

I love crime stories, not the bloody once with lots of shooting, but more the psychological style of solving a murder. All movies start with discovering a corpse. Often it is a cleaning women while dusting, or vacuum cleaning she discovers the corps and starts to scream !

This happened to me this week when I came into the kitchen !

I discovered a corpse swimming in the cat's water bowl. I didn't scream, but behaved like the photographer of a crime scene and took a picture of the dead victim.

Then I solved the crime. The murder was this sweet looking girl, who had killed the poor mouse and brought it into the kitchen to drown it in the water bowl to make sure that it is absolutely dead !

Crime solved, I throw the mouse in the bin and therefore covered a crime because I didn't call the police !

1. After a few stinky bad smelling days and watching TV with thick cardigans and socks, because it was so cold, the painters came back on Monday to give the two radiators the last painting lay.

Meanwhile I had to protect them from the cats as they love to sit on them. I invented a very secure system, two chairs in the front and two chairs on the side covered with a bedsheet.

But as soon as I had taken everything away, Arthur had to inaugurate the now dry radiator, without getting egg shell white.

2. Summer holidays in Belgium are finished ! Finally ! The whole country was sleeping during July and August ! The building sector had 3 weeks off in July and lots of other companies were closed too. Also shops and boutiques. So for the last time I had acqua gym on a Tuesday and not with my usual group on Mondays. Fortunately we were a nice group and had a lot of fun when we had our tea together.

3. My toaster broke down (see post below) and I had to buy a new one. It works perfectly and my toasts are very good ! I looked a little around to see what new things are on the market, and noticed that Kindle ebooks are still not available only a little Sony one, but I couldn't find out if it was really an ebook. I saw lots of them in the UK, but apparently there are not enough French books for this purpose.

4. With the new look of our front garden I badly needed flower pots because the entrance really looks rather naked ! I went to a garden store near Ilona's and bought 10 pots, then I went to her to ask which kind of plants I could put in them, as I don't have a green thumb at all and don't know anything about plants and flowers. She couldn't come with me because she had broken her little toe and she couldn't walk. We had a cup of tea together and then I knew what to buy.

5. This morning I put all my pots in the front yard, then drove to another garden store near Waterloo, to buy earth and plants and in the afternoon I intended to plant everything. Of course the store was closed because they ran out of stock ! That's really crazy. So I came back and instead mowed the lawn

and "enjoyed" the hammering and noise of the workers, my neighbors extend their house to the sky instead of using the large space in their garden. Apparently some people love to live in towers. It's a young couple with a baby and they are not very practical !

After supper we watched TV as usual ...

Yesterday as usual I wanted to make two toasts to eat with my cheese at lunchtime. In fact we never have breakfast but rather a brunch. I put two thick slices of bread in my toaster and nothing happened. I pushed again and again, nothing to do my toaster had died. Peace to its soul !

I have to say it was not the youngest one anymore. I certainly had two others before, and one I especially remember it was a gift of my dear mother. My mother used to buy me things which didn't fit at all into our house, of course without asking what I would like. I needed a new toaster and asked for a white one, because our kitchen is red and white, and also a long one to be able to toast French bread and also rolls. Of course she fulfilled my wish and I got a new toaster for Christmas. When I had opened the box I found a square one, just for two slices of bread but the worst thing was it was dark green with pink roses ! It fitted to my kitchen like a fist on an eye ! She was rather offended when I told her that this thing wasn't exactly what I had wanted for my red kitchen. She loved green. So what did I do, I gave this toaster to a friend and bought a new white one.

So yesterday, the first thing in the morning I did, I went to a household appliances store and fortunately found the right toaster immediately !

This was the old one of which Mr. G. has to get rid of, presented by cat Pookie who doesn't care abut toast and toasters.

and the new one which works perfectly, I tried it out for lunch and my toasts were perfect ! Tonight we can toast on my new toaster ! Mr. G. doesn't like toasts he pretends they crack in his head when he eats them, he loves soft bread. His head is very sensible (apparently). 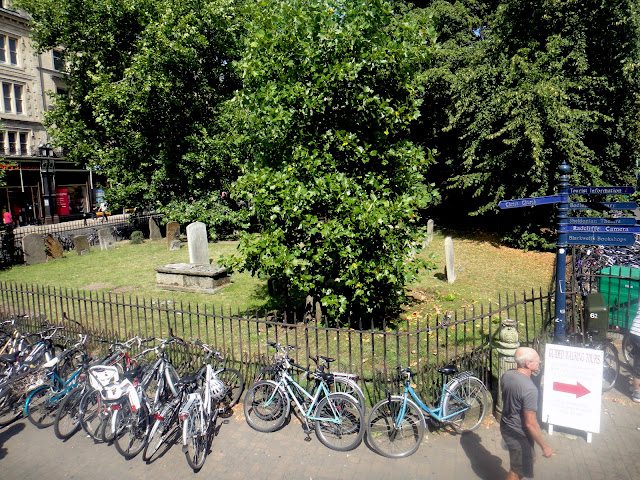 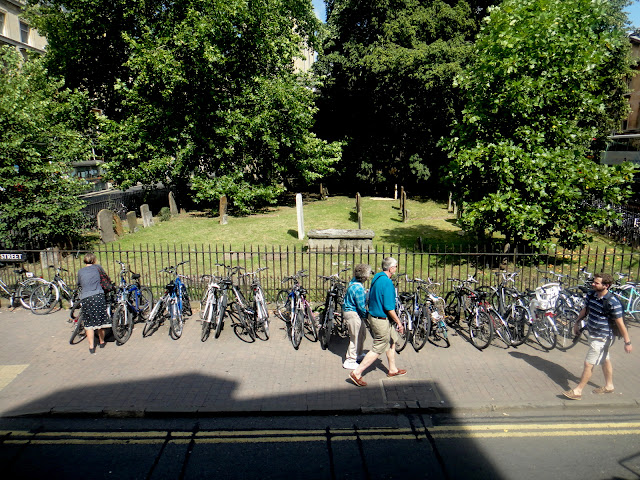 I am very happy to announce that I was asked by Sylvia and Sandy who were so kind to decide to continue in the same spirit as "My World" to be member of the new Our World Tuesday team.

I created the new logo, I just wanted this meme to be continued, because it is so interesting to see our different worlds as we are such an international group and there are many things we don't know of each other and we can't find in books.

Most of the wounded soldiers died not on the battle field but afterwards of gangrene as there was no medication for a treatment.

The wounded soldiers where brought into the Waterloo Church which served as military hospital.

and beginning 20th century. The outside hasn't changed very much

I have been in this church many times for funerals and weddings but I had never noticed that there were so many English commemorative plaques hanging on the walls. I noticed them for the first time when I showed the church to my friend Sandra (Claudie) when she spent a week with me !

here are a few

Across the street is the Wellington Museum which had been his headquarter.

The garden is probably still the same, except the cat of course.

As all people at that time Wellington was quiet small. Today a 10 year old child could sleep in this bed for an adult it's to small.

His room and his coat. Unfortunately it was not allowed to take pictures, but we didn't know, so Claudie managed to take these 3 and I could at least make a picture of Wellington

sitting at his desk and writing military instructions

and also of his bust.

Although Wellington won the battle, when you come to Waterloo you will see much more things of Napoleon. Especially at the Waterloo lion. Everything from cups, plates, cuttlery statues to T-Shirts etc is with a Napoleon, therefore lots of tourist who don't know the history of the place think that Napoleon won the battle.

Helps you to remember what you have done on the weekend of August 28. You never know if you need an alibi ! If you participate please put the little logo on the top of your post and leave your link.


Compared to my last weekend this one was rather quiet and nearly boring !

Our radiators in the living room have been repainted and I had to protect them from our cats. they like to sleep on them even when they are cold. Rosie wasn't pleased and choose the chair besides it. There is still one lay to be painted, hopefully today.

We had again a heavy thunderstorm and outside it was night, no way to go outside lots of streets were full of water and the firemen had a lot to do. In some places there was flooding and a lot of mud in the cellars. I spent most of my time at my computer, filing photos, while the washing machine was turning !

On Sunday there was a big boot sale in the Park of Waterloo. Ilona came over and we walked through the different stands ! It's unimaginal what people try to sell ! From rusty nails to brand name clothes you almost found everything !

Ilona bought a Chinese blouse and some necklaces, I didn't find anything which I liked, but it was nice to stroll around and have a look. Just when we left and went home it started to rain !

We had a cup of tea together and she returned home. I had my laundry to fold !

Labels: What did you do this weekend ? Boot Sale Waterloo

A CROCODILE FOR BREAKFAST ?

When we went to the Grand'Place in Brussels, I found a special bakery. At least the baker had phantasy !

What do you think, instead of having your usual Sunday breakfast eating

or even a crocodile ?

The only problem would be : how to cut them ?