1. On Monday I had enough to do to sort out my pictures I had taken in Amsterdam. I went out for a walk with my neighbor's dog, who is quite lazy. When it rains, then she prefers just to do two steps does her business and pulls me back in the house. But this time the sun was shining and she trotted bravely besides me, just for a little tour.

2. My friend and neighbor Vivienne, should come home but first a medical service had to install an oxygen machine. As her daughter was working, I waited for them the whole day until it was finally delivered. Looks like a little radiator and has a 10 m long tube. The guy explained me how it works and I learned something new again ! 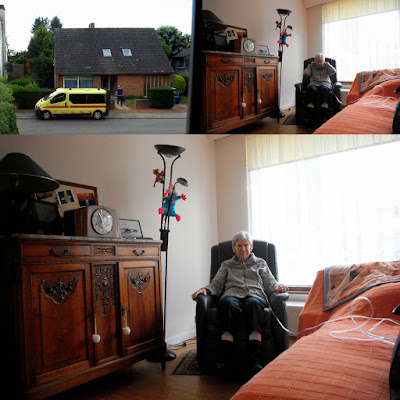 The next day she was "delivered" by an ambulance. I immediately crossed the street to greet her and was so surprised how good she looked. I told her that I had expected a half dead person and she looked as if she just came from the hairdresser ! She had spent 2 weeks in intensive care and then a week in a normal room at hospital. As she had been dead for 20 sec, I asked her if she had been in this long dark tunnel with an illuminated Jesus at the end (as some people pretend to have seen) , and she laughed so hard that her chest hurt, the ribs are still not healed from the heart massage. She said, she couldn't remember a long dark tunnel and not even the devil at the other end. Now she is happy at home and we keep an eye on her if ever she would need some help, as she will be alone the whole day. 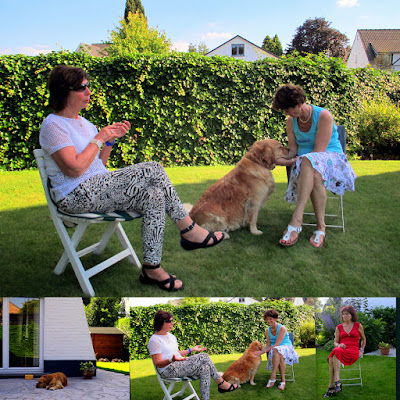 Dominique had invited us 3 to look at our pictures we had all taken during our Devon/Cornwall trip. It was nice to sit together afterwards in her garden and dog Charlie was happy to have such a nice female company. Of course he was more interested in the cake we had with our coffee. Nobody could resist his demanding look, he was starving apparently. We chatted about the "adventures" we had during our trip and I am sure that the rest of the street thought we were doing a Yoga Laughter exercise ! 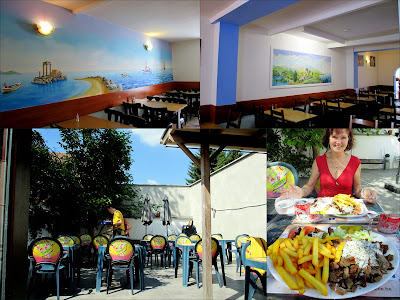 After our holiday painting get together, Ilona and I went to "our" little Greek restaurant, where we could sit in the garden and had a very good Gyros plate with fresh salad, for the same price as a desert in the Amsterdam Greek restaurant ! It belongs to two Greeks, father and son, the father can hardly speak French. They also have delicious pitas and other typical Greek food. 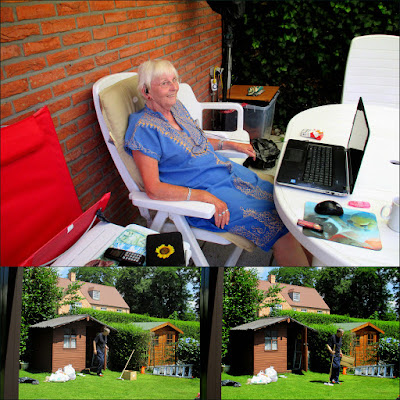 The rest of the day I spent sitting outside and moved as less as possible because of the heat, while Mr. G. had chosen the hottest moment of the day at 1 pm to clean our garden shed ! No wonder that he was completely exhausted after that !

AN ITALIAN IN MALTA

When we have guests at home,  Mr. G. likes to read an English story with his very strong Italian accent. Italians are unable not to roll their r, and if a bell rings it rrrrrrings !

The story is about 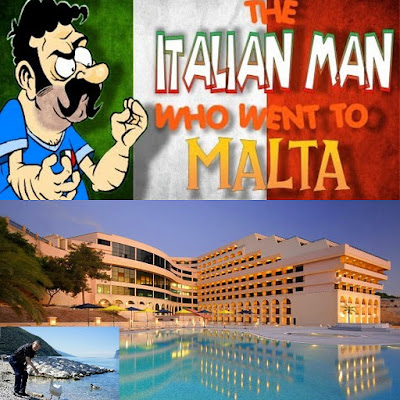 "One day ima gonna Malta to bigga hotel. In morning I go down to eat breakfast. I tella waitress I wanna two pissis toast. She brings me only one piss; I talla her I want two piss. She say go to the toilet. I say you no understand, I wanna to piss onna my plate. She say you better no piss onna plate, you sonna ma bitch. I don't even know the lady and she call me sonna ma bitch.

So I go back to my room and there is no shits onna my bed. Call the manager and tella him I wanna shit. He tell me to go to toilet. I say you no understand. I wanna shit on my bed. He say you better not shit onna bed, you sonna ma bitch !

I go to the checkout and the man at the desk say : "Peace on you". I say piss on you too, you sonna ma bitch, I gonna back to Italy !"

Accents can sometimes be very funny, be assured that I don't sink but think ! 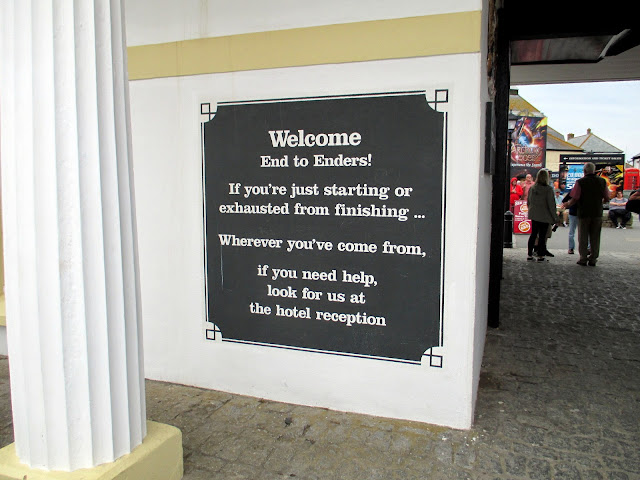 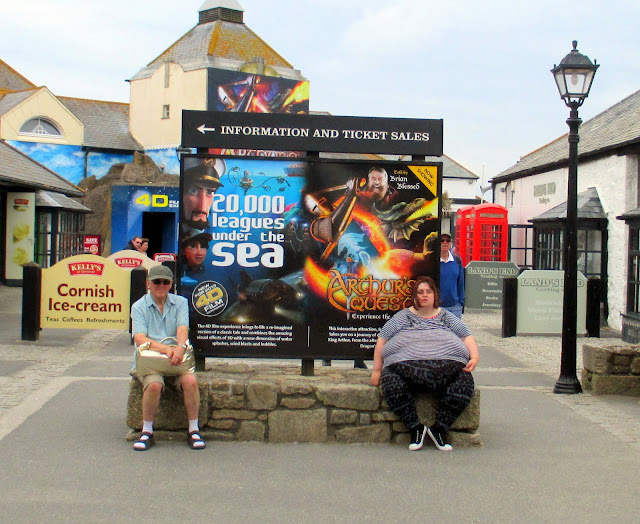 Visiting Dartmouth with our group of Great Rail Journeys, we travelled first by rail to Paignton. 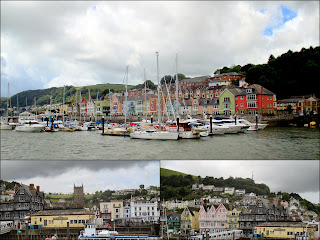 MY WEEKEND OF JULY 12

On Saturday morning we drove to Amsterdam to celebrate my birthday with the family ! 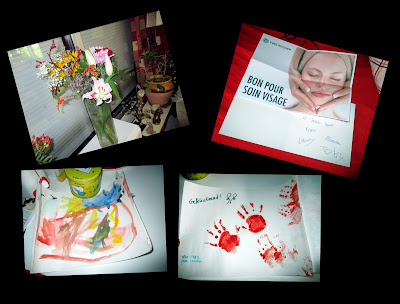 I was very spoiled ! I got a beautiful bouquet, a voucher for a beauty shop (I will come out looking like 17 and not 71) and a modern art painting from grandson Toby ! 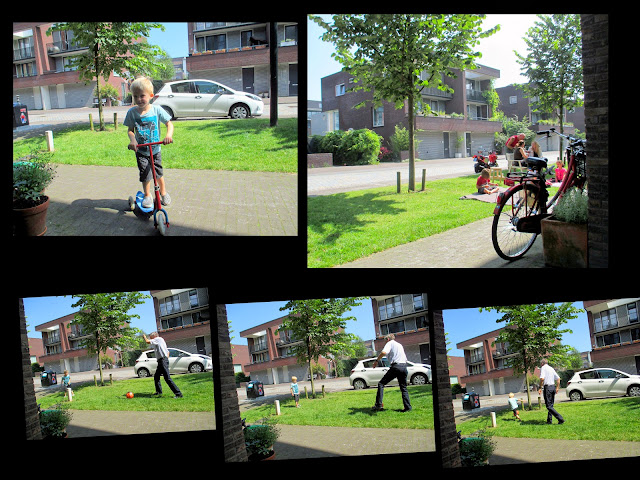 When we arrived they were all waiting in the street, sitting on a bench and Mr. G had to show his talents as a footballer ! I found it very unusual that it is the use that families are sitting outside at their front door on benches or on the grass between the houses and the streets. Can't imagine my neighbors sitting on the street !

After a light lunch I was invited for a cruise to Pampus. After the Franco-Prussian War of 1870 the Dutch government feared an attack on Amsterdam. An artificial island was built, the Pampus fortress. 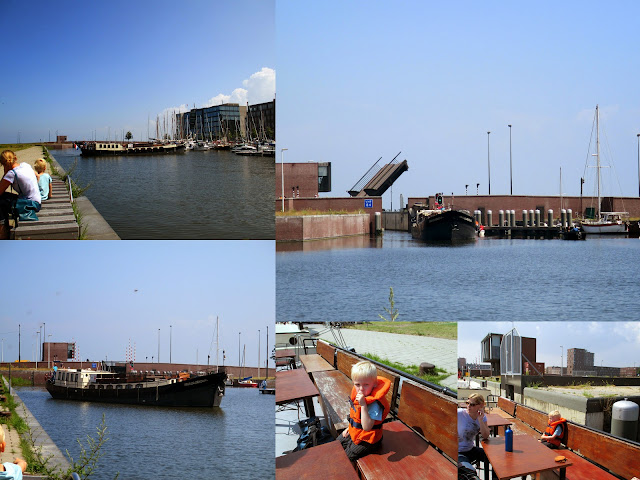 We waited in the sunshine for the ship to arrive, which had first to go to through a canal lock we watched the bridge raising and then the boat arrived. Toby had to wear a safety jacket. 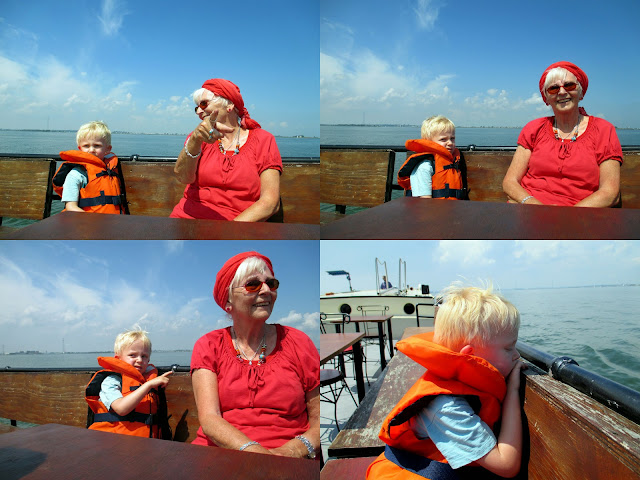 It was a very beautiful ride on the sea 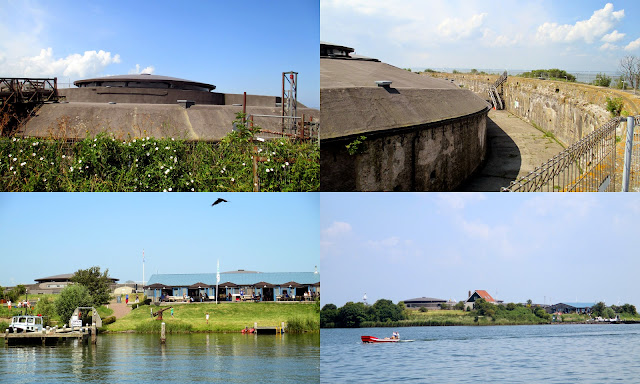 Then we arrived in Pampus, which also has a restaurant, besides the fort. I didn't go inside this dark fortress which reminded me a bunker.  I prefered to walk on the top around it and had a wonderful view on the little sailing boats and the blue water. 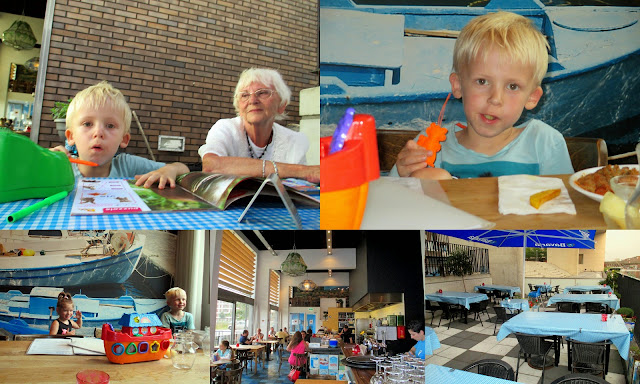 In the evening we were invited to a greek restaurant, which looked so modern, that besides the painting on the wall there was nothing greek. The food was good, but the prices horrendous for what it was including a minimum service. Toby met a little girl who presented herself as "I am a witch !" ! 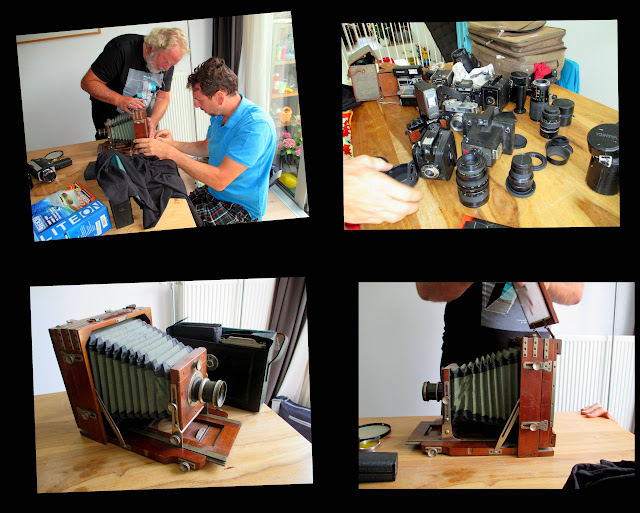 On Sunday my son's father in law arrived with his wife and brought him all his old cameras. It was like Christmas for my son ! The highlight was a 100 year old camera which had belonged to Toby's great great grandfather ! We were happy to see each other again, last time had been on their wedding. We had breakfast and lunch together and a real nice time. They both spoke very well German so there were no communication problems, we just mixed Dutch with German from time to time. 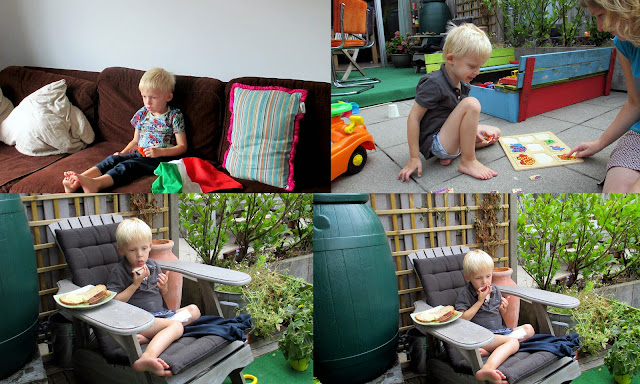 We sat on their huge terrace which is like a little garden and chatted, while Toby played and ate his lunch.

After 3 pm we left reluctantly, but we had 2 1/2 h to drive and Mr. G. was very tired. We had very heavy showers during our trip and sometimes I had to drive very slowly I hardly could see the street in all this rain. But we arrived safely and were greeted by our cats, our neighbor had taken good care of them !