1. This week I got the impression that I hadn't done nothing, and it is Friday. When the sun is shining now, I want to sit outside and enjoy the last warm summer days and when it is cloudy and more cool I am full of good will to do what I should do, but I always tell myself I will do it tomorrow ! A real lack of energy !

2. As Nicole was in the same mood, we spent one afternoon on her terrace chatting about a strange phone call. Marianne, the friend I had who let herself starve because her husband was diagnosed Alzheimer, was saved in the last minute by another friend who called the ambulance and she had been taken to the hospital and her husband who was completely lost too. I had once visited her in hospital and then I never had heard from her again and I didn't know to where she went once cured. Nicole too had tried to find out where she was, found her in a recovery home, but Marianne didn't want to talk to her and to me neither. So we gave up.

3. Our pedicure came and while she took care of me foot nails, the phone rang and it was Marianne ! I couldn't believe it. She was exuberant and talked and talked that she was now in a retirement home in Brussels, that she was happy and that she had ordered a little dog for 2000 € (2.200 $), while the little dog she had, was now with friends. She had also strangled her parrot and now she wanted again one. She is nearly 80 and I realized that there must be something wrong with her brain !  Anyway she didn't have a phone and apparently called from a public phone, and suddenly the conversation was cut off. So I still don't know where she is.

4. It continued to be nice and warm and as I hadn't been in our town center since quite some time, always driving through, I decided to make a little walk there. Nicole joined me with Charlie. After having inspected some boutiques very quickly, we both are not boutique lovers, we discovered some new places. 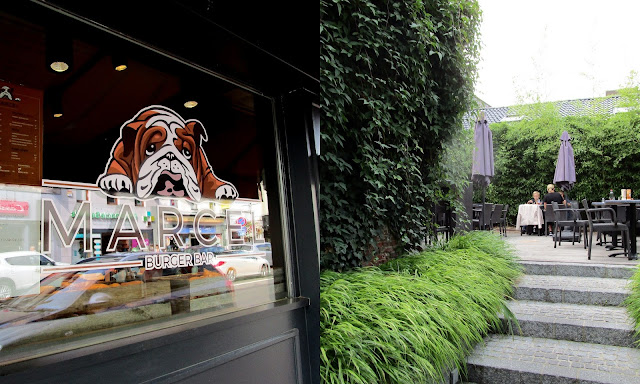 A restaurant which only serves burgers in all variations, with a very beautiful garden in the back. I found the sign so funny. 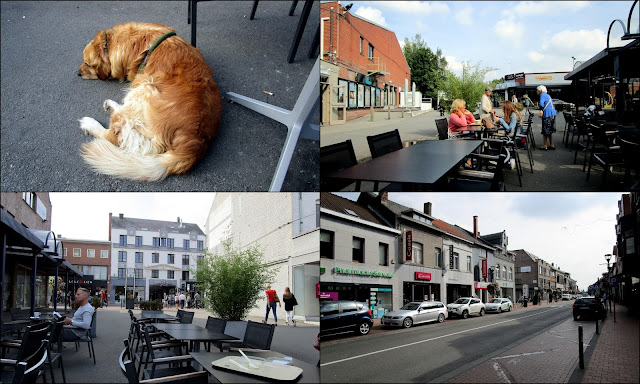 Then we had a coffee on the place at the main street where you can see all people walking by. As usual Charlie had a lot of success and we talked to many people. Finally the afternoon was over !

5. Our painting class with the newcomers grew and our teacher decided that we should wear badges with our names, because it is impossible to keep all the names in mind. We had a lot of fun and decided to meet once a week outside the class, because there is always so much to tell, that we don't have time to paint ! So 6 of us will get together on Mondays and will make a turn.

After class Nicole and I went for lunch and there (through Charlie) we met a doctor who pretended to see what is wrong with a person only by looking in his/her eyes. I got it immediately that he was making fun, but Nicole fell in the trap and really believed it. But before he could look  deep in her eyes, I started to laugh and then she got it too. Finally an Asian lady and an other man joined the conversation and when we left it was already 4 pm.

We went to the shop where Nicole had ordered new kitchen furniture to see how far they were with the order and apparently the new kitchen will be installed in November.

more participants here at FIVE ON FRIDAY
Posted by Gattina at 10:20 14 comments: 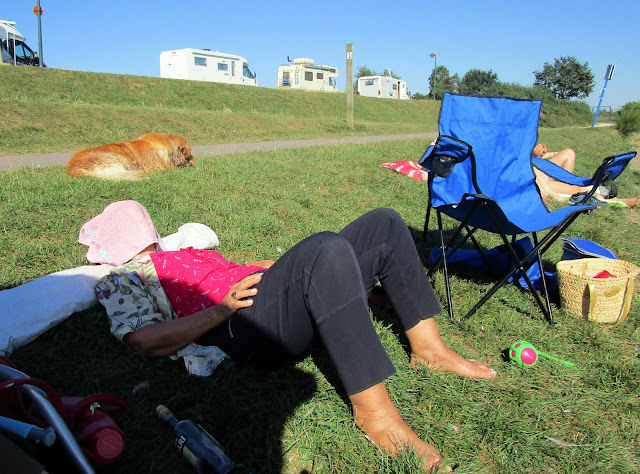 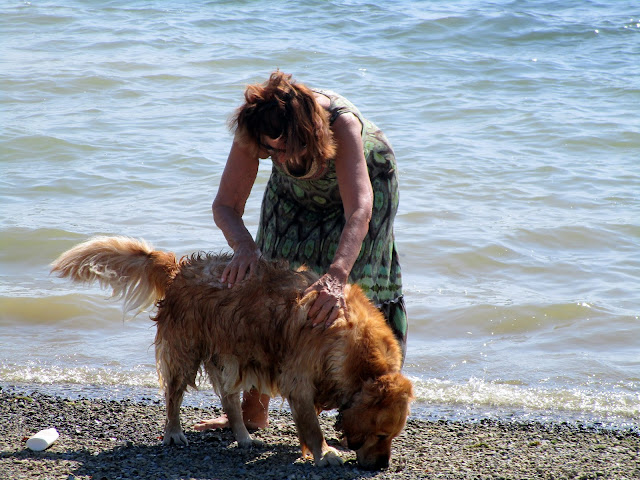 Profiting of the last summer days

When Mr. G. was still working and made computer programs, one of his clients was the Brussels Kart at Brussels - Dilbeek.  The karting track is very big and runs inside and outside.

There is a very nice restaurant, serving a sophisticated Franco-Belgian cuisine.

Brussels Kart provides all facilities for fairs, shows and exhibitions. It is also the place to be for the organisation of events and meetings. But also for family parties, communions and weddings.

They even organise helicopter maiden flights.

We went there with a friend and her two grandchildren a boy of 13 and a girl of 20. The boy was normally too young the minimum age is 15, but with Mr. G.'s presence they made an exception. The kids were delighted ! 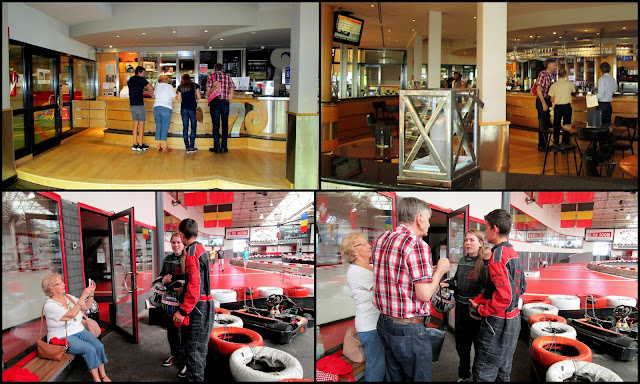 After having bought the tickets, the two got dressed while Mr. G. had found some old colleagues and chatted with them. Of course most of the persons who worked with him were also retired and not many left to greet ! 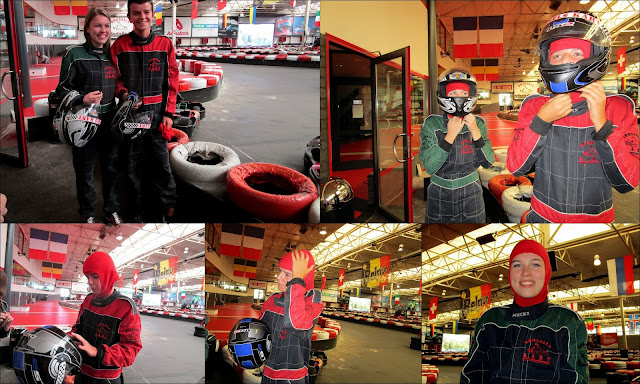 Finally they were all perfectly dressed up and waited for their turn. 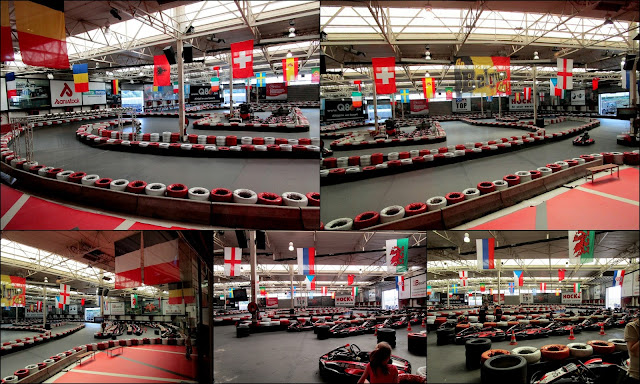 Meanwhile I took pictures of the racetrack 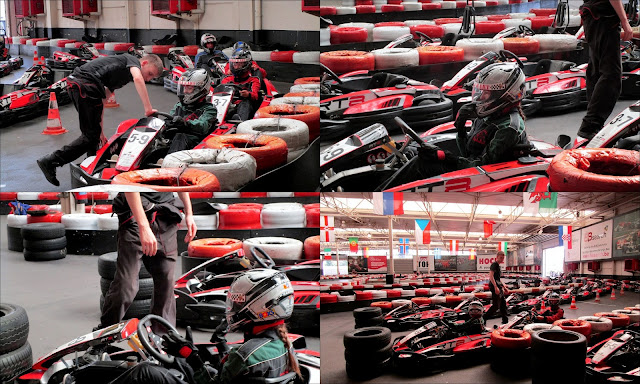 They climbed in the cars and listened to the explanations and then off they went. The racetrack was indoors but also outdoors. 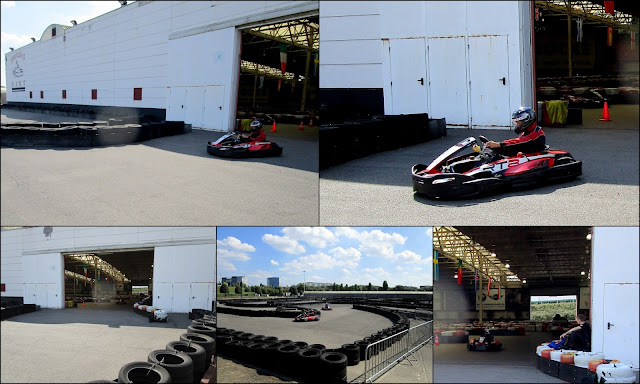 I waited outdoors to take pictures of them, but they were so quick that I didn't know who was who and I hadn't there car numbers.

After half an hour the adventure was over and they both were so happy ! We had a drink outside the restaurant before we returned home !

From hot African temperatures from one day to the other we found ourselves nearly at the Northpole, at least I had this impression ! Long sleeved T-shirts came out again and you had to get used to another lifestyle, because with this heat you had the excuse to just sit or lay around and do nothing !

Now there was no excuse anymore.

We started with a lunch together with my friends from the painting class. 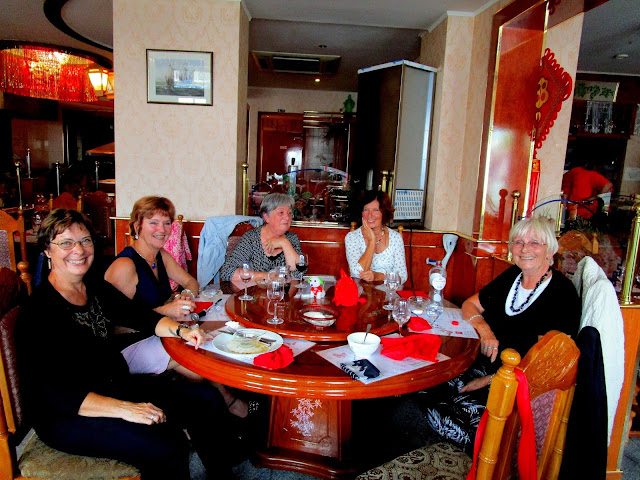 As usual it was extremely good and we ate like horses. We had such a lot to chat, that at the end the restaurant owner started to clean the floor to make us understand that it was now time to leave because she wanted to close ! In the middle sits our teacher (with the grey hairs). One of her daughters works for UNICEF to save starving children and has to go into camps now with a bullet proof jacket armed and two soldiers ! It became so dangerous. We all admired the courage of her daughter. 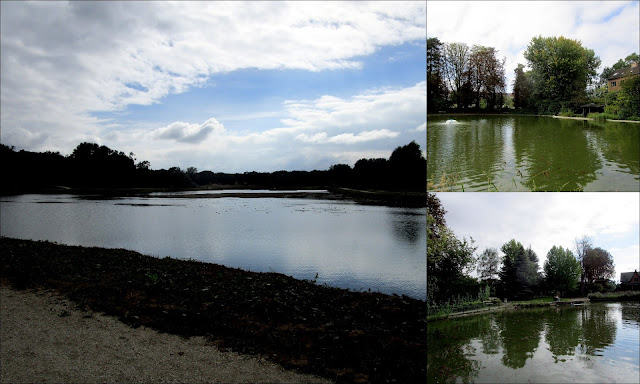 As it was not yet raining Nicole and I discovered a new park with a little lake. But it wasn't a lake, it was a water bassin to collect rain water and avoid floods. It looked very nice just like a lake. We didn't make the whole tour, it was a little too much. 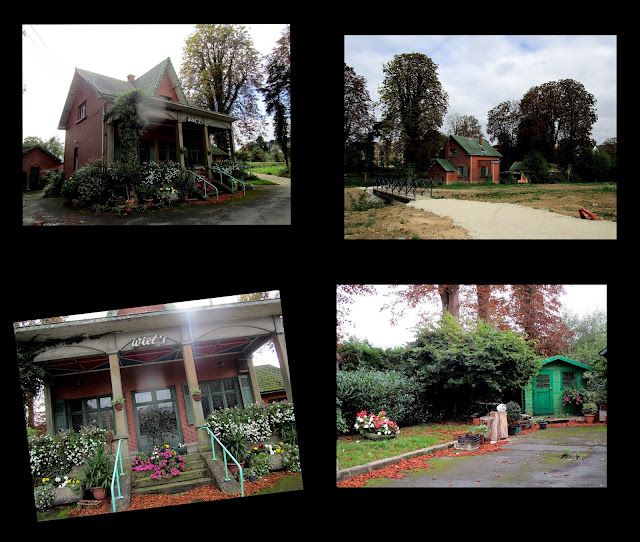 This must have been a little café in the past because the beer brand "Wiel's" is still written above the entrance. Now it looks like a private house. Must be nice to live there it is so peaceful.

After our walk we had a coffee and then returned home.

On Sunday afternoon we were invited to my friend's and (ex) neighbor Dominique. In her 60th she had found a second love of her life. 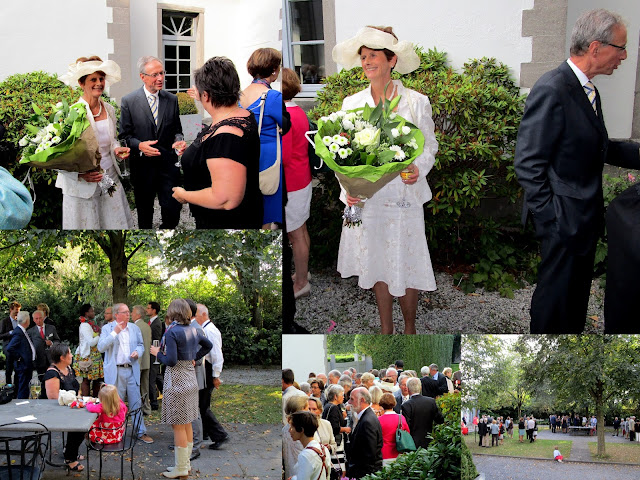 He is 65 and a widower. It was only the reception, the civil marriage had been done already months before. It was hard to get to the new weds, we didn't even know when they arrived, it wasn't very well organized. Most of the people didn't know each other, fortunately our other neighbours were there too,  (left below) otherwise we would have been quite lost, although I had the opportunity to meet her 2 sons and one daughter and it was such a joy to see them again and chat a bit together. Dominique looked very happy and her new husband talked and talked. At 7 we returned home. 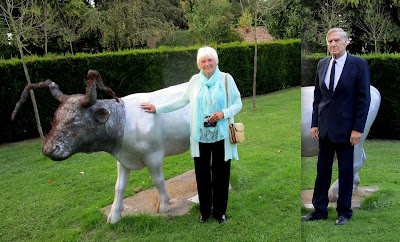 I put our pictures together as souvenir, it is not often that you can see Mr. G. in a suit ! This one he wore for the last time at my fathers funerals nearly 20 years ago, and he was very proud to still fit in the suit !