1. My leg seams to be healed and I decided to go to my aqua gym. It was nice to see my class again and we had a lot to chat about our holidays.

2. I had met an English couple at the Brussels Midi Market who had told me that a new restaurant had opened in Waterloo ! A typical English one : Fish & Chips ! 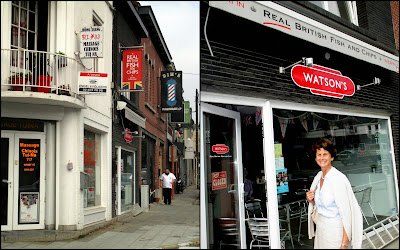 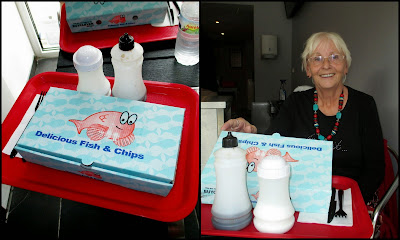 Dominique and I tried it out, we were greeted by the Queen and were observed by the Beatles ! The fish was very good, but the chips too soft it didn't taste like England ! I told the guy a young man from Manchester that he should improve his chips, he couldn't pretend that they were OK when I told him that I had made a tour around the UK and had eaten Fish & Chips a little everywhere.

3. It seems that autumn is moving in slowly, but it was still enough warm to take a sunbath in Ilona's garden, where we enjoyed the sunshine.

4. My neighbor's granddaughter will spend 6 months in Swansea in the UK with the Erasmus Programme (European Community Action Scheme for the Mobility of University Students) It is a European Union (EU) student exchange programme established in 1987. Erasmus+, or Erasmus Plus, is the new programme combining all the EU's current schemes for education, training, youth and sport.

I think this is a great idea and allows students of all European countries and speaking all different languages are being able to know each other better ! She also will improve her English at the same time. Her mother came over to ask me to book the train and bus tickets for her, because she had difficulties with the English language. I did it for her and she was happy and the daughter too !

5.We are still without teacher in our painting class, the one we had died suddenly from a generalized cancer during the summer holidays. It was so sudden that we still can't believe it. The new one should have started today, we know her all she was a classmate, but she didn't show up. It doesn't bother me being without teacher and I don't need one anymore I just paint for fun. I started a new painting and hope it will be finished for our exhibition end October.

Our 16 year old cat Pookie can't jump anymore on the sink from where she used to drink running water from the tap. I have to lift her up so that she can drink.

A blogfriend suggested that I buy a cat fountain, I had never seen one. I googled and found this model, so I ordered it right away in the hope that she will leave us in peace ! Cats can be so stubborn !

Quick Restaurants is a Belgian chain of hamburger fast food restaurants with its head quarter in Antwerp.

It was founded in 1971 in Belgium. It is one of Europe's largest fast food restaurant chains. In recent years, its worldwide expansion has accelerated.

Quick is similar in theme to McDonald's and/or Burger King.

The chain was first established in 1971 in Schoten, Belgium. By December 31, 2004, it operated over 400 restaurants in Belgium, France, Luxembourg, Russia and Réunion. 72% of these restaurants were operated as franchises.

The first French Quick opened in Aix-en-Provence on July 19, 1980. Beginning on March 3, 2007, Quick also had restaurants in Algiers, the capital of Algeria. The first two Russian Quick restaurants opened in Moscow and Tula on March 21, 2008.

Quick does not salt its French fries behind the counter, leaving it up to the diners to salt the fries themselves. The fry containers bear the phrase "Plus ou moins salés: à vous de décider" in meaning "More or less salted: you decide."

Adapted to the use of Belgians and the French you can have beer or wine with your meals as that is what adults usually drink with their meals.

During the year's end festivities they also serve "Foie Gras" (the liver of a specially fattened goose or duck prepared as food) as it is a traditional starter for Christmas and New Year's meals.

The "Quick" in Waterloo

with playground for kids and special menus for students !

Of course we have one in Waterloo too and when my son was little he loved to go there as all kids did. Ever since in about 30 years I have been in a "Quick" maybe 3 times with friends, but then we preferred other quick snacks. I haven't been there with my grandson, as my friends have done, because mine is only nearly 4 and theirs are meanwhile over 15 ! Maybe later I can take him there once as it is still a lot of fun for kids. 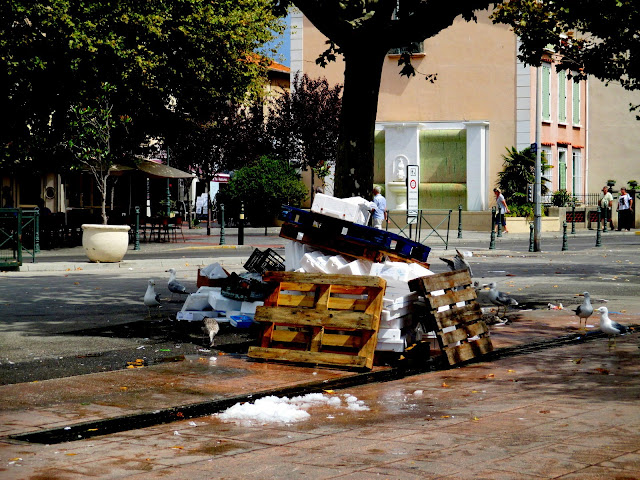 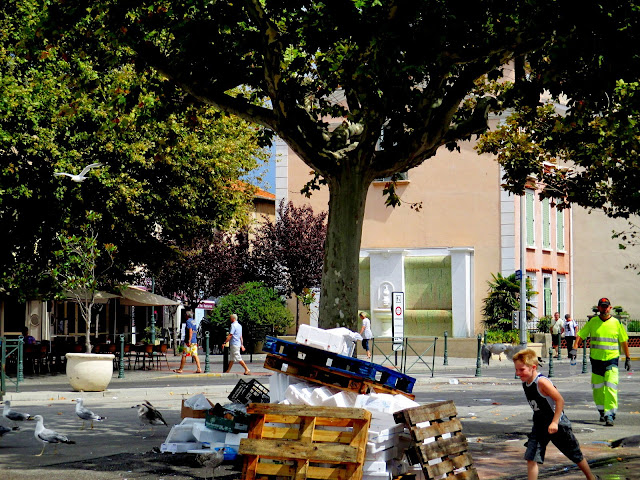 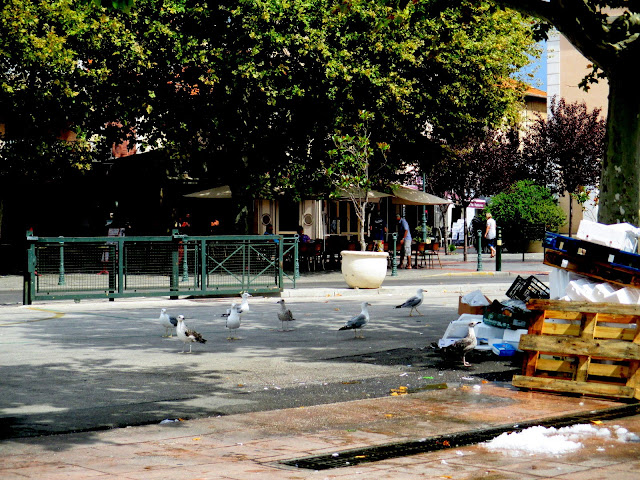 After the fishmarket
Posted by Gattina at 06:15 5 comments:

With the Smurfs taking over New York and Tintin making his mark in Hollywood, Brussels has a lot to be proud of. All the comic strip heroes from Brussels and Belgium were out and about, creating a fantastic atmosphere to celebrate their great success.

MY WEEKEND OF SEPTEMBER 6

As I still not dare to walk too much with my twisted leg, but wanted to go out and take some pictures before I went gaga,  I drove to Brussels where a Cartoon Festival took place !

I just arrived in time when the parade was prepared, and the huge cartoon figures were slightly moving in the wind. I was lucky the road in front of the Royal Palace wasn't closed yet for the traffic so I could drive slowly along the palace and take pictures of the Parade preparations. I didn't even have to get out of the car, which suited me very well when I saw the amount of people gathering there and walking in a crowd is quite tiring !


As it was still early when I had finished, I continued a little sightseeing trip through Brussels and saw some interesting buildings I had never seen before. 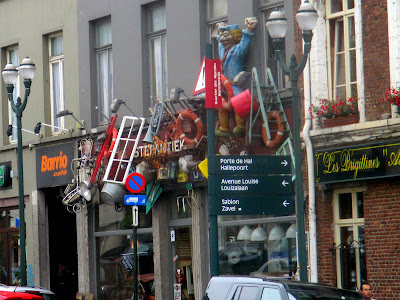 A rather funny decorated Pub 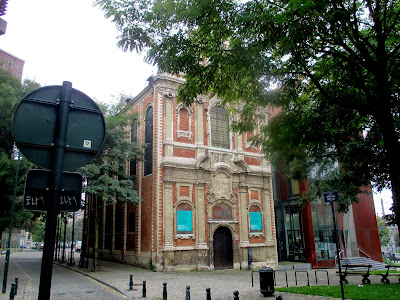 and the Brigittine's church, on which I have to investigate a little more, as it looked rather abandoned.

Then I drove home and worked on my Cartoon Parade pictures for a future post.

Nicole had finally taken the decision (after two years of hesitating) to buy a tablet as she realized that more and more vintage ladies have one and can deal with them although they are afraid of computers.

So she arrived Sunday afternoon with her new Asus tablet and I did the settings. I was quite proud of myself because my own Kindle tablet had been set up by my son and the settings are different. 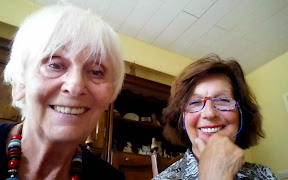 We even managed a "selfie" !

My cats were not so delighted about her  visit,  because dog Charlie came too. The first thing he did was to empty all the cat bowls and then looked for Rosie's toy mice. But they were too small and disappeared in his big mouth, and he lost all interest quickly. 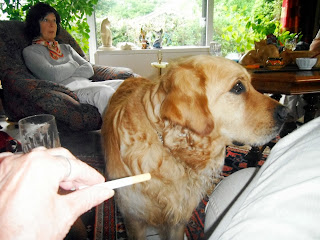 He then settled down for a nap and refused the cigarette I offered him. He is a non smoker. After he was gone, my cats appeared again, only Arthur hadn't been impressed by his presence and had continued his nap on my bed.

I hope she will get used to her tablet, at first it sounded so complicated to her !
Posted by Gattina at 06:30 9 comments: