When I came back from my painting class where we had prepared everything for the exhibition today, I drove back home and saw at the intersection where I have to turn, on top of the red lights also two policemen who directed the traffic !

I thought that's really a lot for a few cars ! traffic lights and policemen ! Now I know why our city tax is so high, so I took a picture as evidence !

As I stopped just in front of the younger policeman he made me a sign pointing at my camera and laughed,

so I took my camera and pointed it on him and he posed for me still laughing, and then I had to turn because the driver in the car behind me got impatient. I thought maybe not the car drivers but at least the police in Waterloo has kept its humor !
Posted by Gattina at 06:00 9 comments:

While doing our acqua gym we all noticed that this year the trees are still very green and it doesn't look like autumn at all. We have a beautiful view out of the windows of the swimming pool and we can all follow the seasons.

Nevertheless the garden had to be prepared for winter and we had all bushes and the hedge trimmed by our young moroccan gardener. He is really a very brave guy. Can you imagine that he can't read and write and goes to morning school now to learn it. He must be around 35 !

2. As usual after exactly 6 weeks I needed to go to the hairdresser to have my hair cut. I looked like a witch without broom. Now it's better.

3. I went with Dominique to the cinema and we saw "Johnny English Reborn" with Rowan Atkinson.

It was a parody of the James Bond films. We laughed the whole film long !

4. A girlfriend which we hadn't seen a long time before we were invited to her mother last week, visited us and we had tea together. I had worked with her Indian husband for 10 years and we were both pregnant at the same time. Her son is 4 days younger than ours.  We talked about India and the social changements starting there slowly, slowly. There still is a huge gap between very poor and very rich !

This weekend we will have our yearly exposition, so we were all very busy by choosing the paintings and hang them up. Of course there also was a lot of chatting and we had a lot of fun. There are some final touches to be made and it will be ready.
Posted by Gattina at 06:00 11 comments:

In my part of the world which means Belgium, the trees are on strike and still very green. There are no autumn colors to see,

not even in the Ardennes, where it's usually colder than anywhere else and the woods are still green and not a single yellow or red leave in sight and these pictures were taken on Sunday !

Even when I look out of the window, everything is still green. And honnestly for me it could stay that way the whole year long. I don't like autumn and winter at all ! I think I am born on the wrong side of the world.
If you want to know how I feel about autumn just click here  "About autumn"

Besides the Boutiques nobody does autumn decorations either. I was the only one amongst my friends and even in the streets you don't see anything. Halloween is not a big thing either it just moves in slowly, slowly a little more each year. In some big stores you find Halloween decoration now, which didn't exist 5 or 6 years ago. I learned all about that on American blogs.
Posted by Gattina at 06:00 22 comments:

a beautiful item of our world it is here
Posted by Gattina at 06:00 1 comment:

of October 15. If you participate please put the little logo on the top of your post and leave your link.

With my friend Chantal and another one from our painting class we visited the exposition Tutankhamun the Egyptian King. Perfect copies of alll the things they had found in his grave were exposed, the originals are in the Museum in Cairo. The exposition has such a lot of success, since February that it had been prolonged til end of November. I will write and show you pictures later.

After the exposition we had a coffee under the Atomium.

The weather was sunny but it is now getting really cold, so we cleaned and covered the garden furniture and put the cushions etc in the garden shed. Kim's tent has to stay outside because even in winter she sometimes sleeps in there ! Crazy cat.

On Sunday Ilona and I wanted to visit the Cave of Spy where a Neanderthal man had been discovered.

After driving around to find the place, which apparently Madame GPS didn't know, we finally stopped at an "Irish Pub" at least that was its name. I bed the owners had never seen an Irish Pub in their whole life. But the food was good and the place lovely. They had a conservatory where we ate, and had a beautiful view on a park.

The caves are supposed to be at the very beginning of the Ardennes and finally we found it after having asked several times, there was no sign !

The place was beautiful and finally we found a way through the woods walked a km and couldn't enter the cave because the way down there was so difficult and dangerous that we didn't dare to slip down eventually on our bottoms ! 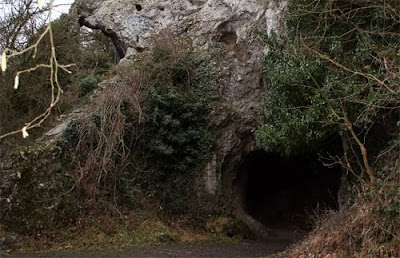 (I found this picture on internet and I think we haven't missed anything).

Ilona also had her broked toe just healed and still had to be careful. The walk through the woods was wonderful, it still was very green and no sign of "golden" autumn leaves. Amazing for a 16 October !

We were a little tired when we got back from all this fresh air.
Posted by Gattina at 06:00 7 comments:

Labels: Grottes de Spy, What did you do this weekend ? Tutankhamun expo Brussels

I am reading a crime story which happens in the Victorian era in St. Giles, London around 1860. A place which was described having the worst living conditions of poverty.

"Open sewers often ran through rooms and cesspits were left untended. Residents complained to the Times in 1849 : "We live in muck and filth. We aint got no priviz, no dust bins, no drains, no water-splies, and no drain or suer in the hole place." The rookery was a maze of gin shops, prostitutes' hovels and secret alleyways. Peter Ackroyd writes "The Rookeries embodied the worst living conditions in all of London's history; this was the lowest point which human beings could reach".

Of course when I started to read the book and the life conditions of the people living there, I wanted to know more and that's why I copied and pasted the above paragraph to share my new knowledge with you. Not that you think that I changed my name into Madame Wikipedia.

Anyway the book "The silent cry" is written by Anne Perry whom I didn't know and it is really very suspenseful. So each time I close the book and before I switch off the light I enjoy this view and am happy that I didn't live at that time !

I wonder why so many people talk about The "Good old Times " ?