The famous Formular 1 car racing takes place in Francorchamps/Spa, this week-end. I am not very interested in car racings but it is Mr. Gattino's favourite sport and that, nobody can ignore !

Today and tomorrow he will be scotched to the TV screen and shout his comments to the cats, as nobody else would listen to him.

Especially Arthur is a very good listener as you can see.

A few years ago he even went there himself together with dear son, but they came back both very disappointed. They only had seen flying cars where you hardly could recognize the color, supported noises near the sound barrier, and all that on a very uncomfortable seat. Since then, he prefers his sofa of course. After the race, the phone calls start because cats unfortunately don't have an own opinion, they always agree.

Entrance prices seem to me very expensive, but of course it is not my hobby ( prices)
But the city Spa where Francorchamps is located, is a lovely town in the Ardennes.

Of course Ferrari has to win, the cats cross their paws already !
Posted by Gattina at 06:24 14 comments:

This week I don't have a lot to show and tell ! All hope for better weather in September is gone ! It's still cold, 17° (63 F) and it rains. It is really amazing that our feet haven't changed into flippers yet. Apparently it is the coldest summer since Nineteen hundred something and I wished we had some global heating, or at least some local !

So I thought I show you the rain drops of which I hadn't taken pictures yet and tried it with macro set.

First the strings I would like to put my socks, pants and bras but there are rain drops hanging instead. 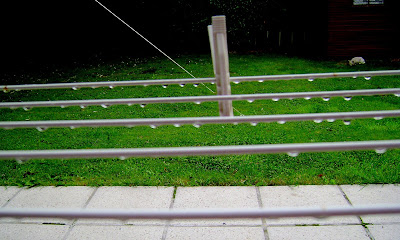 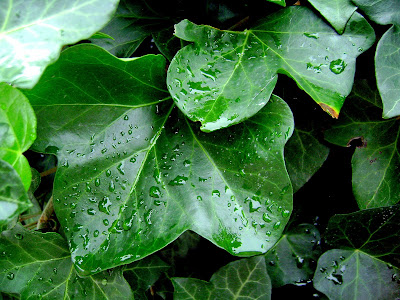 then with leaves. The whole garden looks like an african jungle ! You can't do anything because of the rain !! 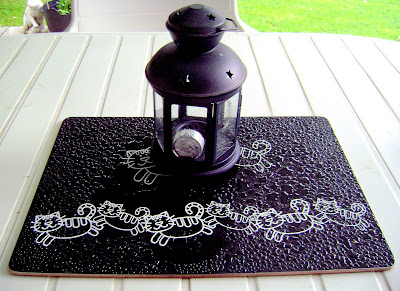 Even under the suntent (I wonder why we had put it up ?) it rained on the tray. I can count on my fingers how many times we used this tent ! 6 times in 4 months maybe ? 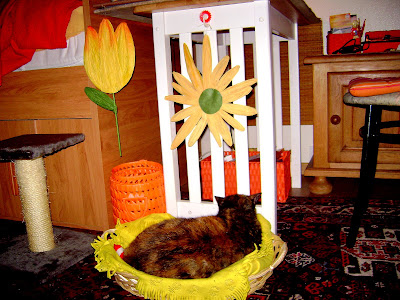 To chear me up a bit and put some sunshine in my room at least, I hang these flowers on my desk ! 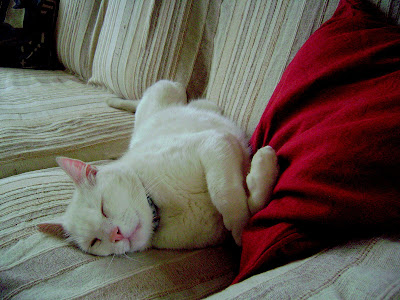 and to finish with my macro shots I tried it on sleeping Arthur. The poor guy does 24 h sleeping marathons because it's wet and cold outside. I honnestly consider to do the same next summer !
Posted by Gattina at 06:23 12 comments:

1. Gobal navigation system is called GPS in Belgium, Navi in Germany and Sat Nav in the UK. I don't know how it is called in the USA.

2. Drivers following their satnav's instructions through a village were stunned to find themselves driving along a narrow track at the edge of a 100-foot cliff.

3. An English woman's country house was under siege from truck drivers obeying satnavs and ploughing into her cottage - 15 times.

4. A truck driver was stuck in his cab for three days after his satnav directed him down a narrow country lane, where he became hemmed in by two banks and an overhead pipe. Luckily for him a friendly local family passed him three meals a day until he was rescued

5. A German motorist took his satnav literally when ordered to 'turn right now', executing an immediate 90-degree turn and ploughing straight into a building site, up a flight of stairs and into a loo.

6. A taxi driver drove 200 yards into a river under directions from his satnav, leaving him stranded in the river.

7. A young couple ended up amongst a sheep herd

8. A Christmas shopping trip to Lille in France ended up 100 miles away in a Belgian village with the same name after their coach driver made a satnav blunder. It took an extra four hours on the bus to get to the right Lille in France.

9. A German driver in Hamburg maintained his faith in his satnav, even when it directed him onto a construction site marked 'closed for construction'.

10. A 20-year-old student had a narrow escape when her satnav directed her to drive onto a remote level crossing, resulting in the unplanned destruction of the car by a train.

11. Hundreds of drivers were sent down a narrow country lane towards a river. When they got there expecting a road bridge they found a disused foot passenger ferry platform.

12. A trucker driving from Turkey to Gibraltar on sat-nav ended up 1,600 miles adrift at the North Sea at Lincolnshire (UK).

13. I love my GPS, Satnav, or navi very much but I won't follow it blindly and then land up in the King's castle restrooms !

Bearskin-hatted guardsmen at this year's Trooping the Colour
The Ministry of Defence is to meet an animal rights group to discuss alternatives to the bearskin hats worn by guards at Buckingham Palace. I appreciate ! First, the poor animals, second it must be brain damaging to wear such a heavy mop on once head ! That gives me an idea, why not replace the fur by a deep brown mop ??

This cake was made for the Queen Mother's staff at Clarence House
A large slice of cake made to celebrate the wedding of Lady Diana Spencer and Prince Charles has been sold for £1,000 at an auction house in Gloucestershire. A more than 20 year old piece of cake ! Wow ! I didn't know that cakes are like wine, they get better each year ! This piece must have an esquisite taste !

Ryanair said the jar held "a vegetable oil/mushroom soup type substance"
A Ryanair plane was forced to land in Germany after a passenger had an allergic reaction to mushroom soup. The soup leaked onto the man from a jar in an overhead locker on a flight from Budapest to Dublin on Monday, the airline said.His neck reportedly swelled up and he struggled to breathe, forcing the plane to divert for emergency medical help. I always say, tomato soup is far better than mushroom soup and then it only looks like blood !

Choose the right first letter and you could get less junk e-mail
How much spam you get may depend on the first letter in your e-mail address, a study reveals.
The analysis, of more than 500 million junk messages, revealed those letters that get more junk than average. It found that e-mail addresses starting with an "A", "M" or "S" got more than 40% spam. By contrast those beginning with a "Q" or "Z" got about 20%. That's very interesting ! I have to think it over. What should I choose amongst these names ?
QOCHATA
QUIGLEY
QUOVADIS,
QALETAQA.@gmail.com ?

DON’T worry – you’re not seeing double.
This is Yoda – the FOUR-eared cat.
US couple Valerie and Ted Rock found the kitten with the extra set of ears two years ago and made it part of their family. Despite Yoda’s odd looks Valerie said his hearing is normal and vets have been left mystified by his appearance. Valerie said: “The vet had never seen anything like it before.” Isn't she a cutie ? How lovely my cats would look with four ears ! I am sure they would better listen to me !
Posted by Gattina at 05:58 8 comments:

As your host today, I just want you to show us a picture of your blogging place ! Your room or bed or whatever space(s) or place(s) you have to write your posts, and I hope I will be able to see a lot today. Sometimes when I read or write a comment I try to imagine the place where my blog friend is sitting right now but it is very difficult. So today I hope my curiosity will be satisfied

And here is what I call my "window to the world" : 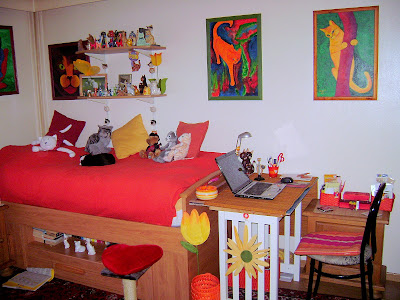 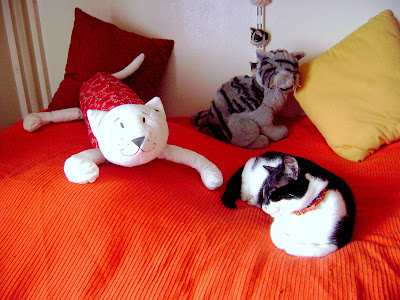 With little Rosie or my other cats watching over me !

I made this little place when I started blogging 2 years ago. I just had enough space to put a table behind my bed and arrange it as a little desk with all I need. Here I spend most of the time of my day. I am retired and have nothing to do besides enjoying life, so when the weather is bad (which it nearly always is) I prefer to look out of my world window and not my real one which only shows me boring rain !

Our next host is Woodlandmama for september 8th

I very much love the English countryside. It has something special which I could never find elsewhere. I don't know if it is because of the special green of the grass, or the difference of trees and bushes, or the mansions and little cottages. 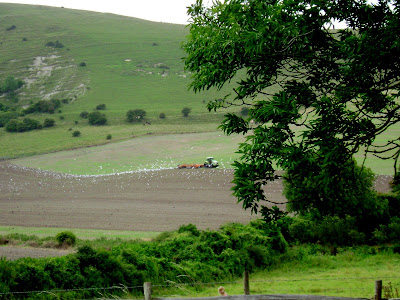 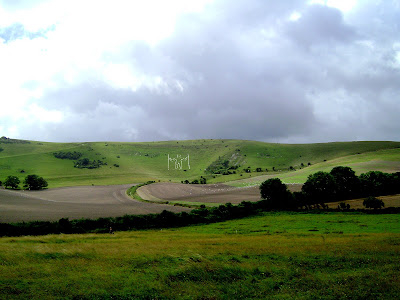 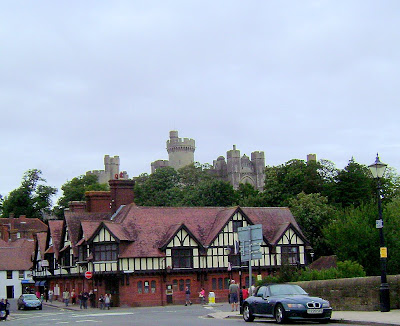 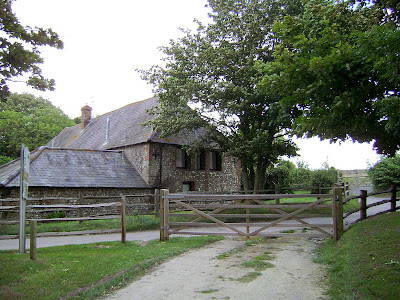 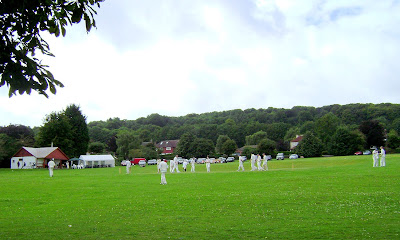 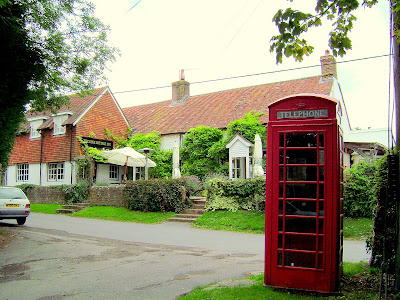 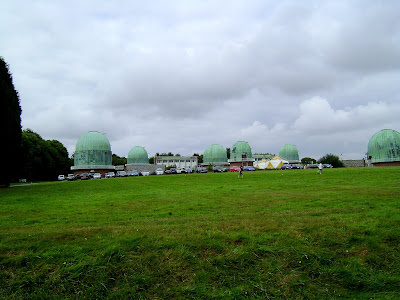 a weather station
Posted by Gattina at 05:45 8 comments: