1. We had our last aqua gym course, the summer holidays start on July 1st and unfortunately our course respects the school holidays so it will be September when it starts again ! For the last lesson, our young trainer had invented games ! That was not exactly to the taste of us oldies, but finally we had a lot of fun and wet hairs, which most of them didn't like ! We had to swim or walk together by two arm in arm, pull or push one who lay on the water from one side to the other and of course the first couple got an applause. As last exercise we played a kind of water polo, throwing a soft cube into the air and through the opposite goal, I am not good in these games and in sticking together, so I was happy that we were 13 and we had to be in couples. Generously I left my place to somebody else and had fun watching them while I did my excercises.

2.  After a grey morning the sun came out a bit in the afternoon and before it started to rain again, I quickly put Oscar the lawn mower robot out on the grass. With this rainy and sometimes warm weather the grass and weeds grow so quickly that it is hard to follow to get rid of them. Most of the gardens look like jungles ! I also sat outside and worked on my computer.

3. I had to drive my neighbor to the hospital for her monthly eye shot but she called me that she had caught a cold and couldn't go. Lots of people have a cold with this roller coaster weather. I stayed home and read. I even was too lazy to go shopping, fortunately Mr. G. does it every day, as if we were living in the past when there were no refrigerators.

4. Ever since Nicole had had installed a sun tent on her terrace the sun went on strike. It's now nearly a month that she has it and wants to use it, but without sun it makes no sense. I paid her a little visit in the afternoon, we could sit outside but without sun tent, there were too many clouds.

Summer really starts well, no sunshine, and only catastrophes in the News.

5. I went again to my aqua gym because I had missed a lesson when I was in Turkey and had to recuperate the hour. We played again, it was the same program, but at least it was very funny. This time two of the oldies were offended, said that this was not gymnastic and left. We weren't sad, because they only spoiled the ambiance ! Some people just take themselves too seriously. Poor souls.

As I always see the same faces on TV, I made a strange discovery ! Look at that !

Don't they look like twin brothers ?  Trump and Johnson (the mayor of London), one still hopes, the other has given up ! Please note that they are both blond !

Linking to FIVE ON FRIDAY
Posted by Gattina at 06:30 23 comments:

You might have noticed that the buttons on a shirt are usually sewn on the right side for male shirts and on the left for women's shirts. I found the key to this mystery that lasts for decades ...

Fashion imposes this strange standard since at least 1850. Why ? Four possibilities were found :

The shirt buttons placed to the left would be more practical for women who are breastfeeding. Most people are right-handed. Sewing buttons on the left, the woman can open her shirt with her right hand and keep a hand free to hold her baby. 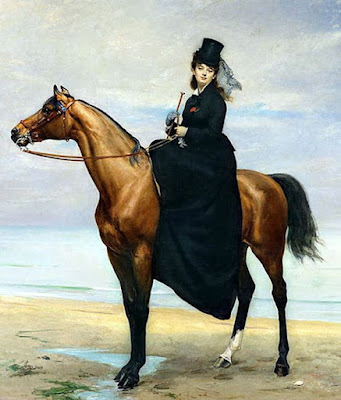 In the past centuries women rode side saddled. Their legs were placed on the left side of the horse. And with buttons sewn to the left of her shirt, the wind blew less under under her clothes .

3. Because of weapons
According to this theory, the buttons placed on the right of the man's shirt allowed him to hold his weapon with his right hand while unbuttoning it with the left hand. Why he should do that was not explained. 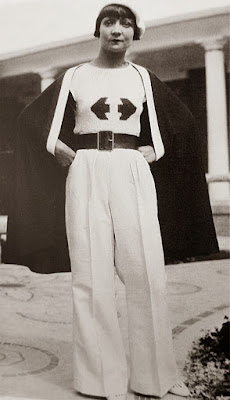 Another theory suggests that manufacturers have done this on purpose to distinguish men wear from women's clothes, at a time when ladies loved to wear male clothes. That was at the beginning of the last century.

Today I think nobody cares anymore if the buttons are on the left or right side ! 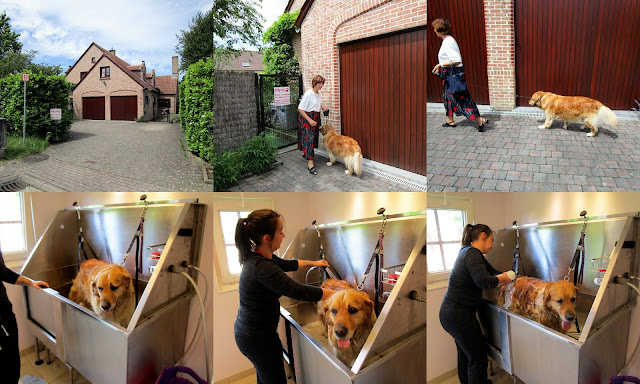 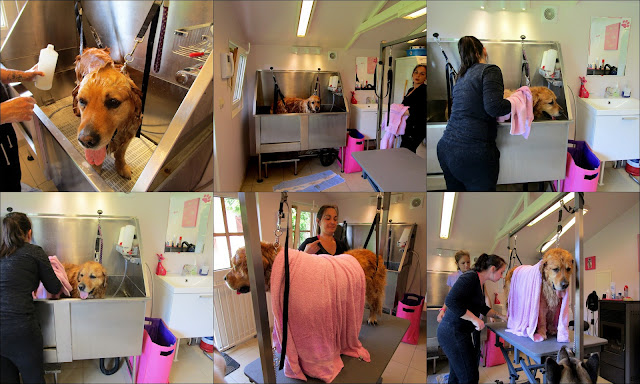 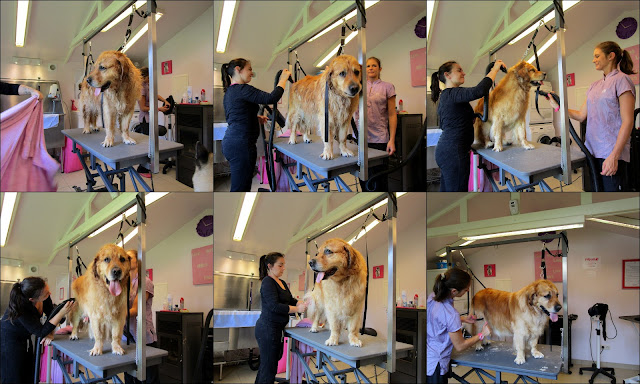 Charlie at the groomer

Brussels Central Station is located in the heart of Brussels, from where you can easily walk to the Grand'Place and also to the main museums.

Victor Horta (the key European Art Nouveau architect) was awarded the design of the Central Station building complex in 1910. He finished the initial version in 1912. However work was halted by the First World War. Financial constraints limited work after the war, and in 1927 the government suspended the project altogether. In 1935 a new office dedicated to the project was set up and work resumed. The Central Station was planned as a hub in the connection. However, the Second World War slowed construction again. The interruptions and delays to construction left large areas filled with debris and craters for decades. The station was finally completed in October 1952 based on a modified design by Victor Horta. 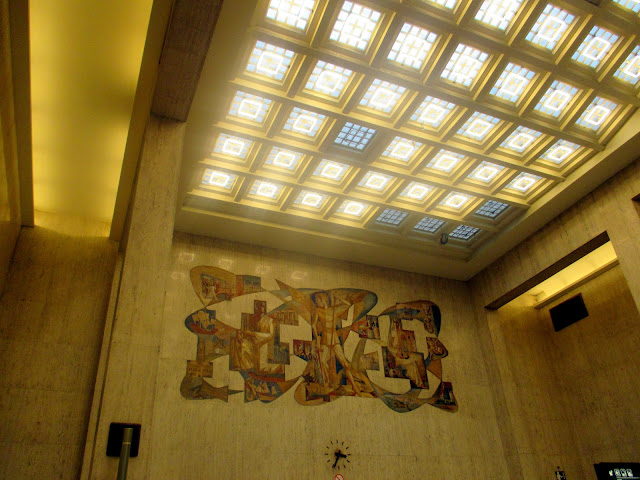 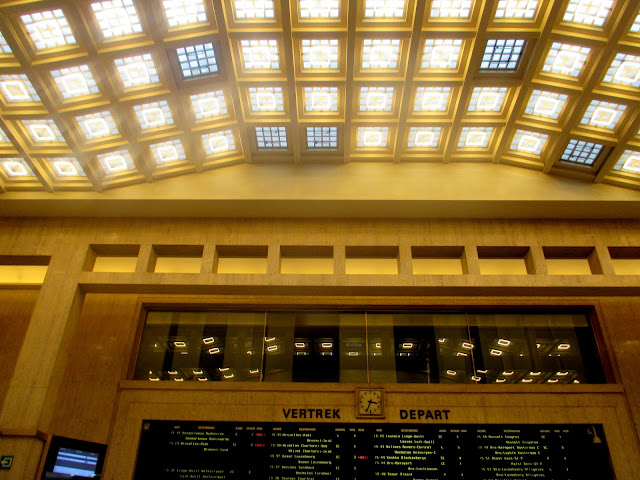 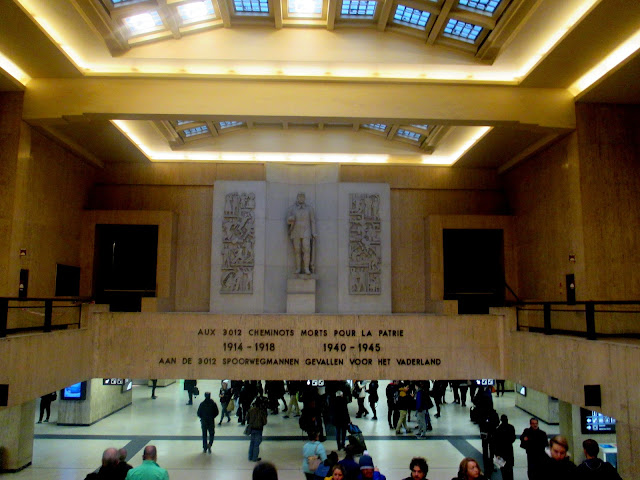 The inside is very beautiful 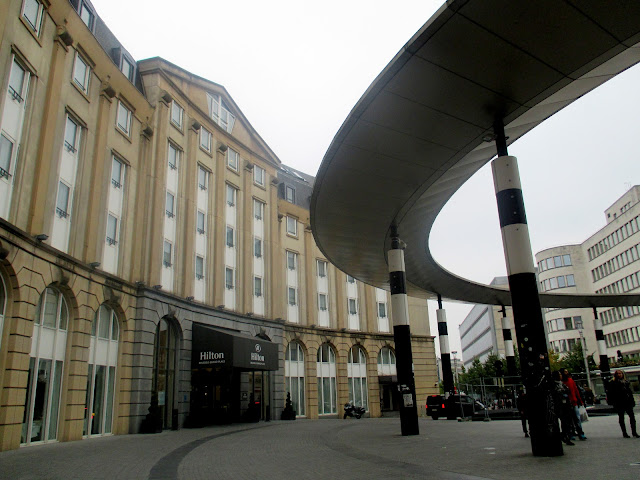 The Hilton Hotel is just opposite the entrance of the station 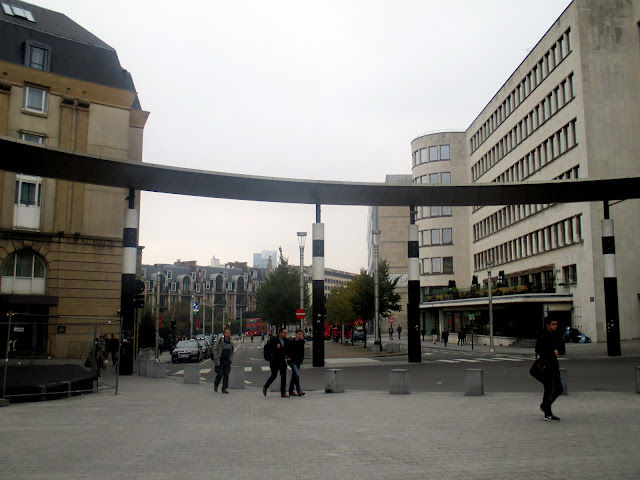 The way to the Grand'Place and the center of Brussels 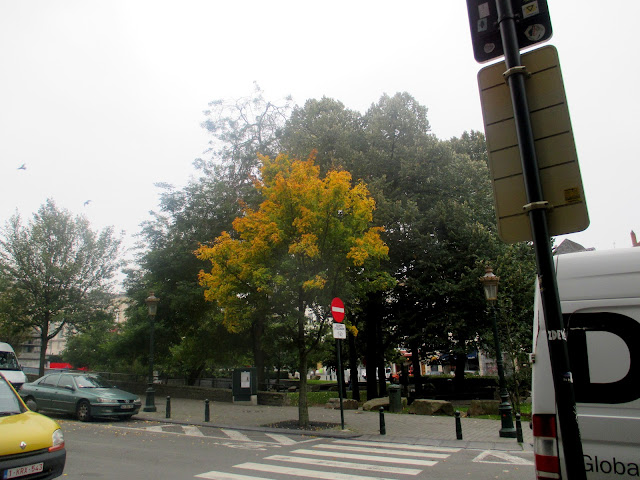 A little park on the other side of the street.

Nicole had to take Charlie to the groomer and I went with her to take some pictures. He was such a good dog I even think he enjoyed to be pampered by two young girls ! 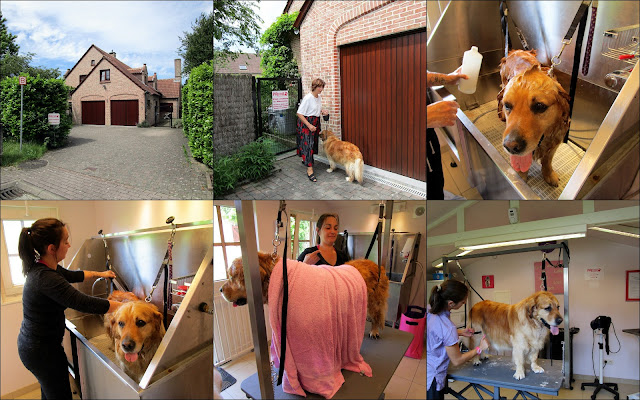 He was a real beauty once the whole procedure was finished and we took him to the Mont St. Jean farm for a drink, as the sun had suddenly came out after a whole wet day. We had a drink and everybody admired Charlie !

Sunday was again not a day to go out but we went to the cinema and saw a real funny French movie, a daughter who had lost her job and returned to her mother. When the daughter tried to explain to her mother that she needed an email, the whole audience almost rolled on the floor so much we all laughed. 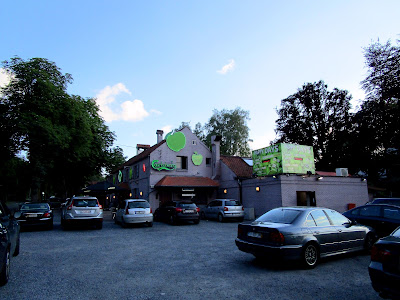 After the movie we had a drink in "La Pomme" the apple, which has a lot of English clients. It's a bit like a Pub.

Of course everybody was talking about the Brexit and the big disappointment. Nobody had really thought that it would come to this disastrous result ! For those here who like the English they were sad and said that the country will go bankrupt, the others were happy because they were so stupid to leave and anyway they always asked for extras. So the opinions are devided.

I came to Belgium because of the European Union (at that time called Common Market) My father started there at the very beginning in 1958. At that time "Europe" was very small. Just France, Germany, Italy, Luxembourg, Belgium and the Netherlands. The official language was French and the people there were so motivated to create a united Europe. When in 1973 the UK joined, my father was not happy at all. He didn't speak any English, because in posh schools you only learned French (the diplomatic language) Latin and Greek. I remember the fear of the Belgians who thought that they would loose their job in the many American companies, because of the language. There were suddenly so many British people on the market whose mothertongue was English. Slowly slowly English became the main language for the European Union and my father was furious. I grew up to be an European, and don't know what patriotism is. I live in Belgium, my husband is Italian, our son is more Belgian, and we have a Dutch daughter in law. As he worked and lived for 10 years in London, he could have married an English girl too. 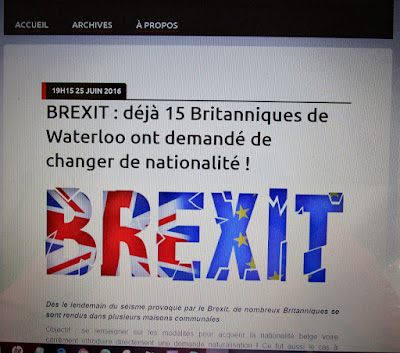 This was the title of our local Newspaper. 15 Brits of Waterloo asked for changing nationality ! And that was only the first day after !

In our rather small town Waterloo, 450  British live here. "Most of them live in Waterloo for many years and have a job and a social life. They are worried and angry, according to our Mayor. Furious because, as expatriates, they had not been entitled to vote. Worried because, if they remain British citizens, they may have to make many efforts, particularly concerning work permits, taxation and pension. Fifteen requests within 24 hours, is quite exceptional. And considering the received phone calls, that number really is likely to increase. "

I read in a local Newspaper. Scheduled weddings had to be delayed because of so many English citizen who had come to the City Hall immediately after the result of the Brexit.

For the young British generation, I hope that the old guys who still dream about the rich Commonwealth find their brain back !

I just booked my holidays, a roundtrip from Eastbourne where I stay with friends as each year to Edinburgh. For me the Brexit came on purpose, the pound had never been so cheap ! But honestly I would have preferred to pay like last year and keep the UK in the European Union for our youth !
Posted by Gattina at 06:30 4 comments: