1. Before I go on holidays to Egypt next week, I wanted to do my Christmas shopping. I hate do that in the last moment, I prefer to do it when I have time to look and am not in a hurry. 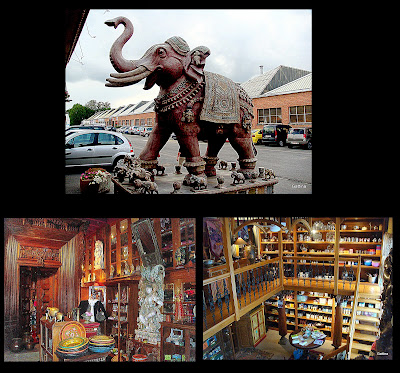 I went to "my" Indian shop, a real Ali Baba cavern, walking around and looking for inspirations. I found some little things, had a cup of tea together with the other customers in the little tea corner and enjoyed the place. It's always so peaceful in there !

2. Somebody in the States had shown on a Blog a doll bed which she had bought at Ikea, not for a doll but for her cat ! I looked on our Ikea Website and found the bed. So I took the opportunity to go there, had lunch and found the bed ! 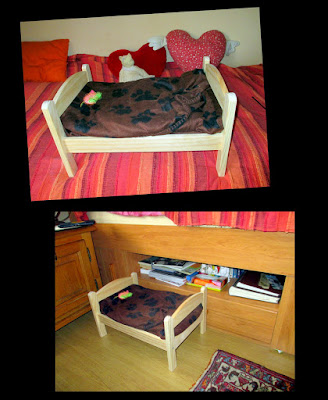 Mr. G. assembled it and now it stands besides my bed for good old Pookie who because of her arthritis can't jump on my bed anymore, this way we still sleep side by side so to say.

3. On my way back I stopped at Ilona's for a cup of tea and a little chat before I continued my Christmas shopping in Waterloo.

4. Maybe you remember that I had made a few Christmas cards for the Waterloo Council and retirement home. 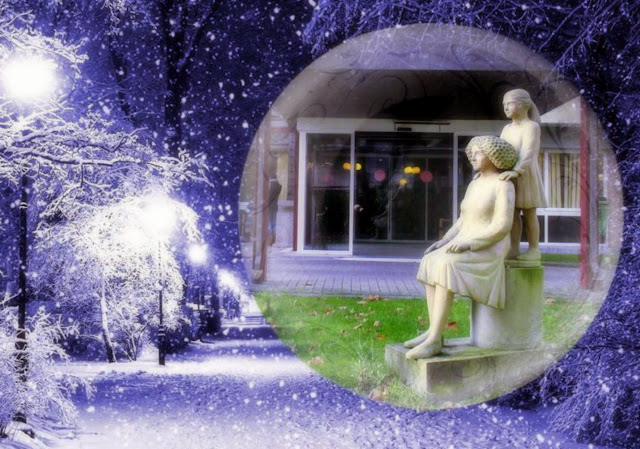 Today I was informed that this one had been chosen and was already at the printer ! That made me quite happy !

5. I needed some food shopping and afterwards I went to Nicole to bring her her flight ticket. I also had a bone for Charlie, but he wasn't allowed to eat it because he had an indigestion. So he sat in front of the fridge and whined he had smelled it although I had hidden the bone under my coat before I handed it over to Nicole ! We couldn't hear him anymore it was terrible, so finally she put him outside for a while, and we could chat in peace ! I wouldn't be surprised that he will sit in front of the fridge door the whole night !

According to psychiatrists most of our problems stem from our childhood (poor parents) In my case it is the profound aversion against beards.

Shortly after the war when I was about 6 years old,  I lived with my mother and father, in his father's big house, together with his sister, husband and her two daughters and my father's youngest brother. Fortunately the house had 5 bedrooms on the second floor and 3 on the first. We all lived there together because all of them had lost their apartments in the bombing of Frankfurt and there were no possibility to find a home all houses were destroyed.

My grandfather had  Multiple sclerosis and I only knew him laying in his bed in the "Master's" room which had once been his office and was very big. Each Sunday morning my cousins and I were dressed up in our best clothes for an audience with my Grandpa.

From left to right, little Monika, me and my other cousin

For the 3 of us it was a horror moment. This man scared us terribly. Unfortunately I can't find any picture of him, 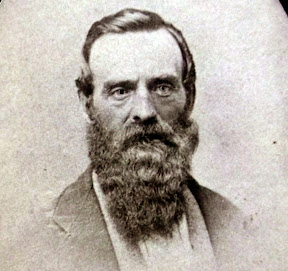 picture from the web

but I think he must have looked a little like this when he was in better health. When we had to line up in front of his bed we saw an old man with cavernous, piercing eyes and a long grey beard which made me, the little girl,  think of sauerkraut. I was fascinated by this hairy thing and sometimes discovered some food still hanging in the hairs. One by one we had to go near  him and then he would ask us how we had spent the week or something like that, I don't really remember. My little cousin Monika (who later married the Brita Filter inventor) started to scream  and run away and was always carried back by my very angry aunt who didn't hesitate to hit her. I think this marked me the most.

Nobody ever talked about my grandpa, he must have been a very odd person. I once asked my father how his father was in general with his children and all I got for an answer was : "he was a proper man" ! That explained that my father had never learned how different fathers could be and I only learned the difference when I married, and Mr. G. became a father ! I had never lived that !

Therefore when I see a man with a beard or even with a moustache, or is not properly shaved, it brings back bad memories. 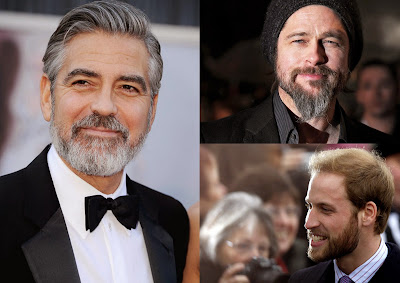 I always found George Clooney a handsome man, but with a beard ?? and Brad Pitt whom I don't like even shaved looks even worse, not to talk about Prince William ! 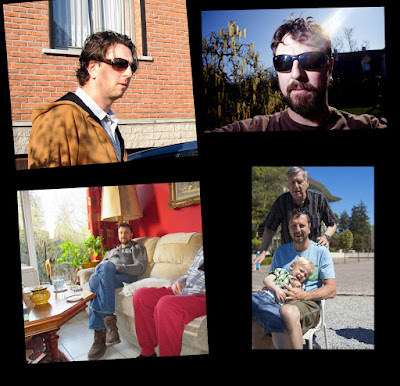 Without and with beard and the 3 generations !

And then my son started with a beard ! Lucky for me not for too long, I always thought he didn't feel well when he wore a beard. But ever since he became a father too, he is also wearing a beard and I avoid to take pictures of him I don't even do it on purpose ! It's just in me this allergy against beards.

I was lucky that when I was 20, beards were not in fashion at all ! I would have stayed a nun ! It then started again with the Hippies in the 70th. 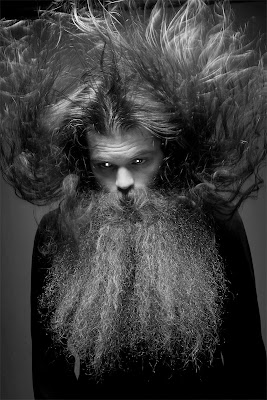 My worst nightmare is seeing my grandson like this ! But when he is old enough to wear a beard, I will see him only from heaven (or hell) ! That's an advantage when you are an "old" grandma ! 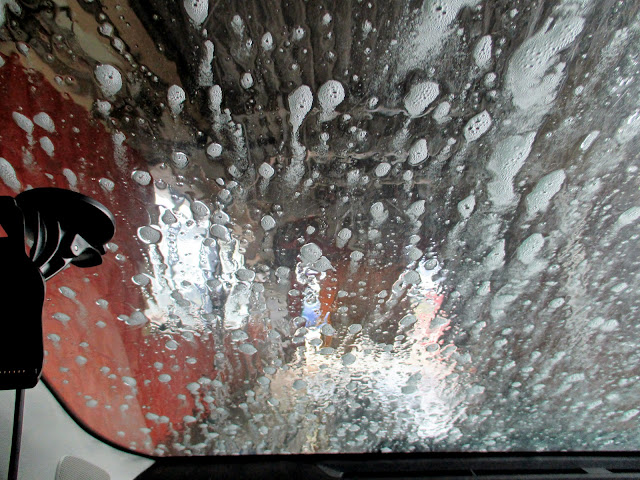 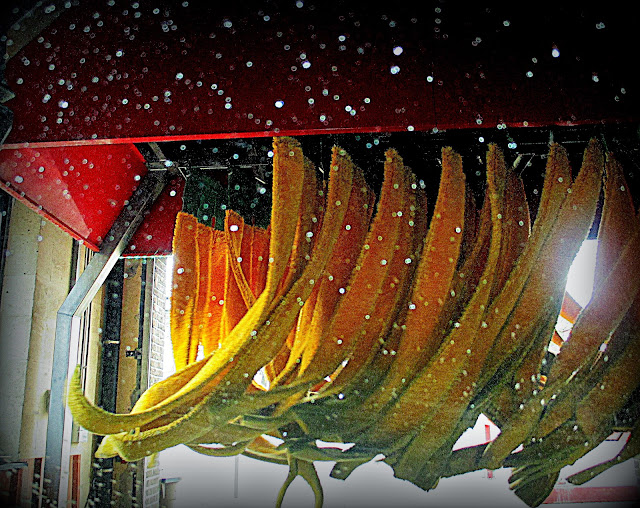 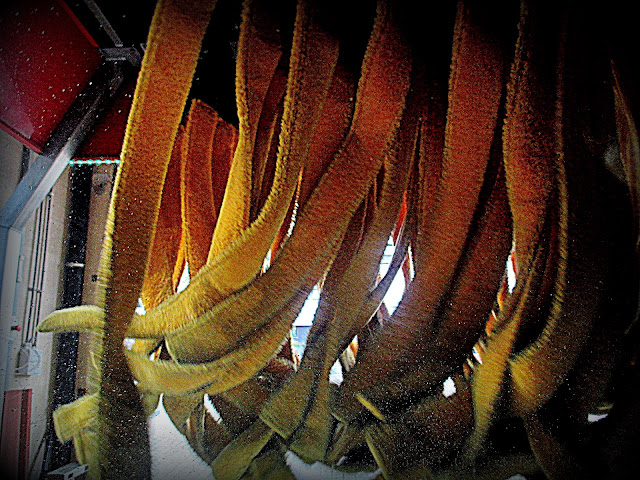 and now my car is clean !

Brussels traditional Christmas tree has arrived from Latvia this year on the Grand Place on Thursday around 3:00 am. 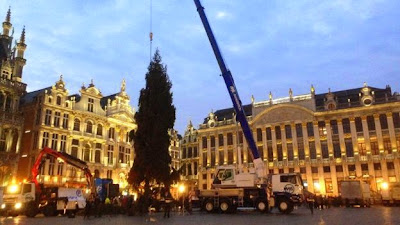 It was raised by a crane and placed in one of the three 2 m deep wells beneath the cobblestones of the Grand'Place.  It was finally standing around 8 am . 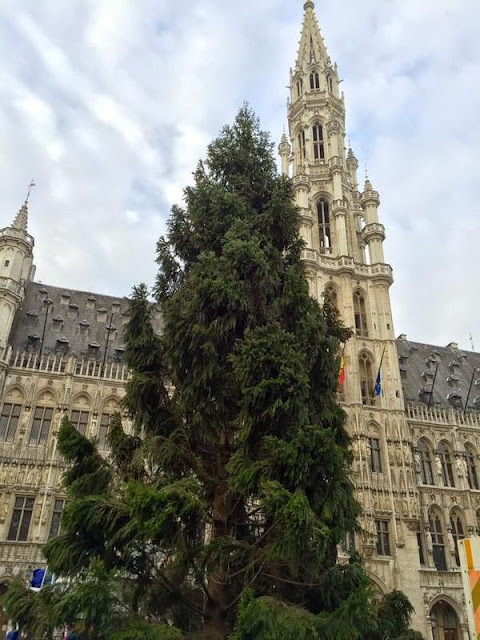 The tree is  18.3 meters (59 ft)  high and was chosen by the Mayor of Riga. It had been cut last Friday in Latvian forests and left Latvia on Saturday to be transported over 2000 km (1243 miles) by water to the port of Travemünde in Germany and from there with a special convoy to Antwerp and then to Brussels.

Usually the Brussels' Christmas trees come from the Walloon Region, but this year, the city of Riga was the "European Capital of Culture 2014", and therefore wanted to offer a Christmas tree to the capital of Europe. "It's a wonderful symbol for Latvia to close this year of European culture with a Christmas tree in Brussels" the mayor said.

The tree will be decorated with silver symbols created by a decorator of Latvia as cultural heritage of this country. 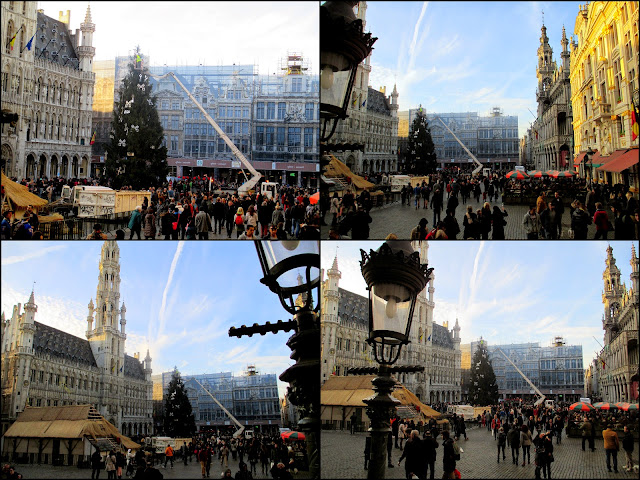 The place was packed with people who had the same idea as I ! 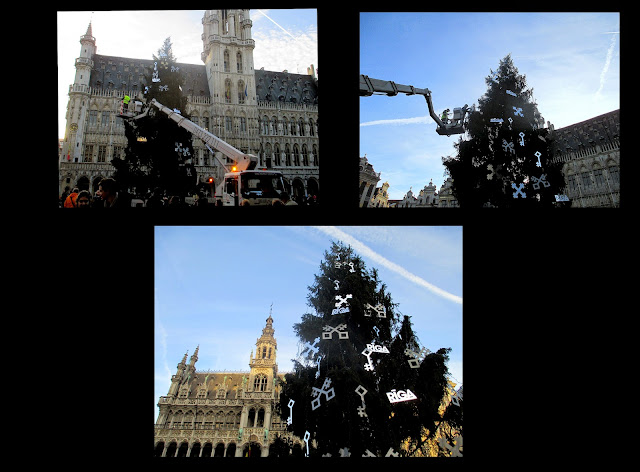 Not so easy to decorate a Christmas tree of this height !

At the same time the crèche was built 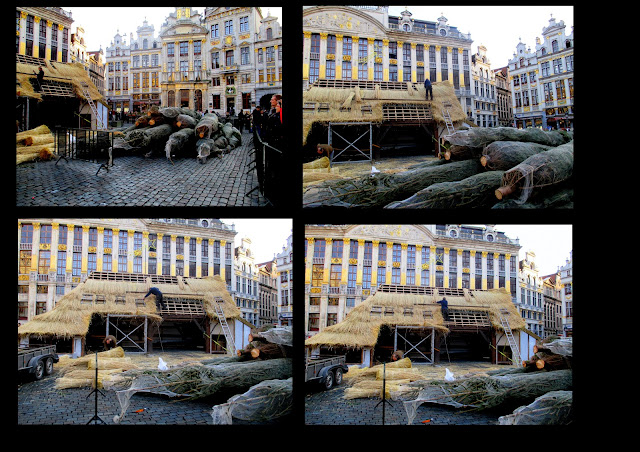 The firs lay packed on the ground they will be put around the creche and carpenters covered the roof with straw. 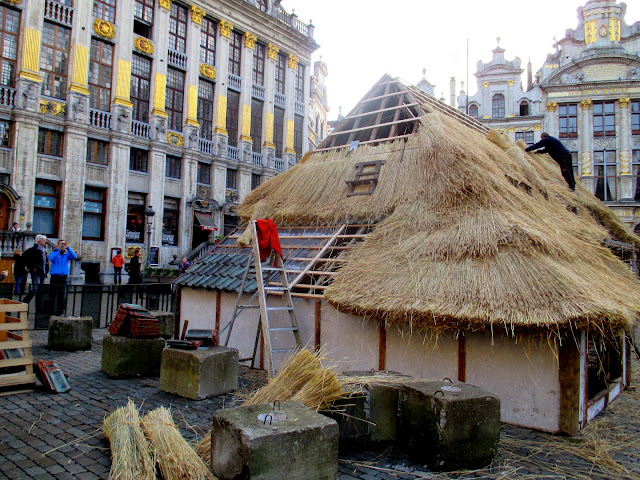 One side was almost finished. 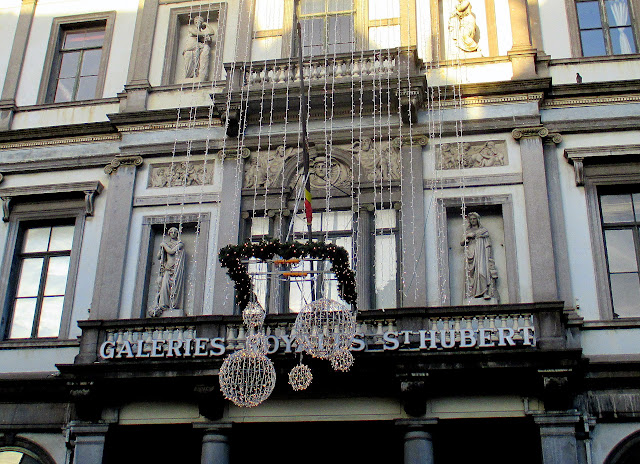 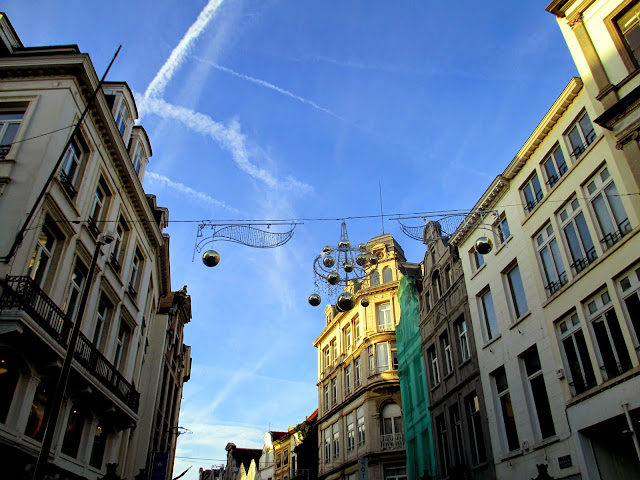 and over the streets 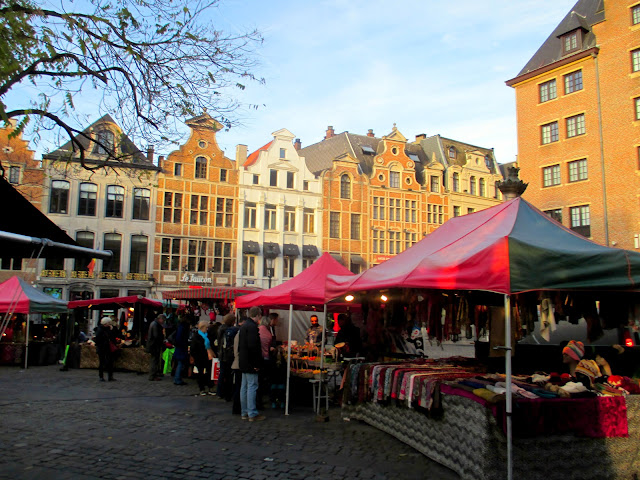 Just outside the place was a little market with handmade things, ideal to find an original Christmas gift.

At least this year we will have a beautiful Christmas tree, which will attract lots of tourists. The official opening is next weekend on November 28. (here is a link to the Christmas market 2010) 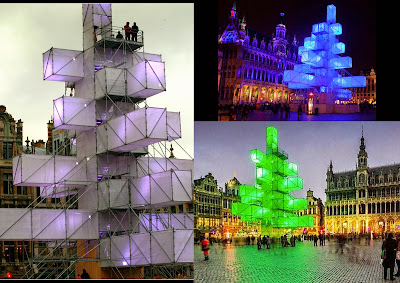 The Christmas tree in 2012 was a strange thing made out of boxes (Christmas tree 2012) It caused almost riots ! There were so many protests not only from the Belgians but also from other countries that the city decided to dismantle this thing before New Years Eve, there had been threats to burn that thing down ! People wanted a classical Christmas tree and not a modern monster. I wrote about it here : The End of the Christmas tree 2012

MY WEEKEND OF NOVEMBER 22

Now that my cold is over I feel like a tiger whose cage had been opened ! The weather was sunny but cold, and I decided to go first to the Anderlecht market

and then I wanted to see the huge Christmas tree, which had been erected on the Grand'Place during the night. 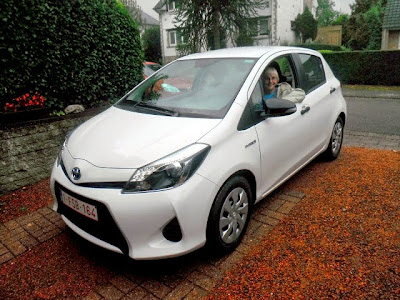 Ever since I have my Toyota Hybrid car I love to drive in the city and don't mind traffic jams at all, my car runs for free in electric mode when I drive under 60 km/h (37 miles) and only switches automatically to petrol when I drive faster and it is so silent that you can hardly hear the motor and only when I am in petrol mode. I made my tour on the market, bought fruits and then asked my GPS to guide me to the Grand'Place ! In short I never arrived because there had been an accident in Brussels and the whole city center was blocked. So I did a great sightseeing tour through areas in Brussels where I had never been.

As my friend's daughter from the South of France will come to Brussels in January to continue her studies with the European student exchange, she had asked me about a municipality in Brussels to look for a room to rent.

I took the opportunity and drove there and discovered a very nice area I had never seen ! 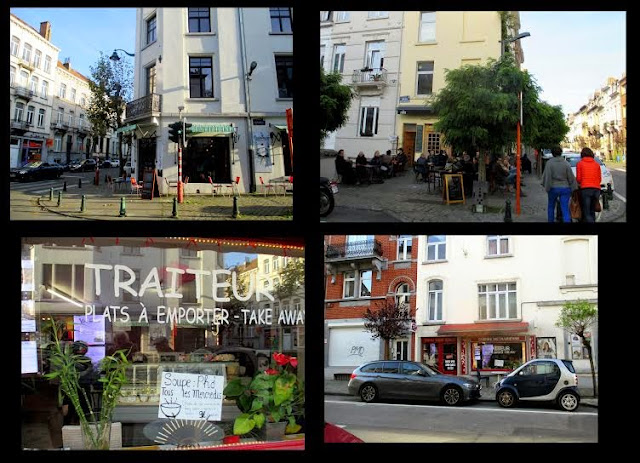 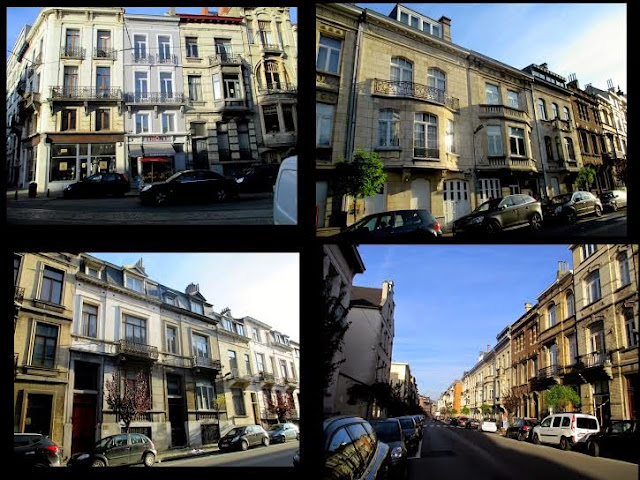 The street where the room was for rent, looked very pleasant, I saw a lot of young people, restaurants and cafés.

In the afternoon while Mr. G. was scotched on the TV screen for his Formular 1 I did a second attempt to see the new Christmas tree ! 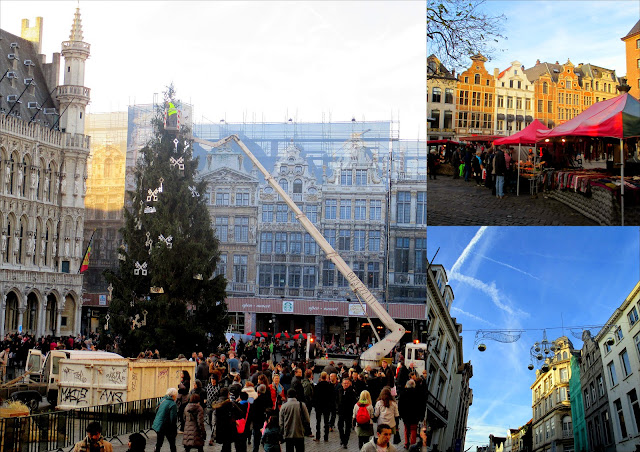 This time I arrived without any problems, parked my car in a car parking and walked over to the Grand'Place. It was packed with tourists and people ! Apparently I hadn't been the only one to have this idea. I watched for a while how they decorated the tree, and built the crip, but I will write about this in another post. Around the place Christmas decorations were already hanging over the streets. Next weekend the Christmas market will start. 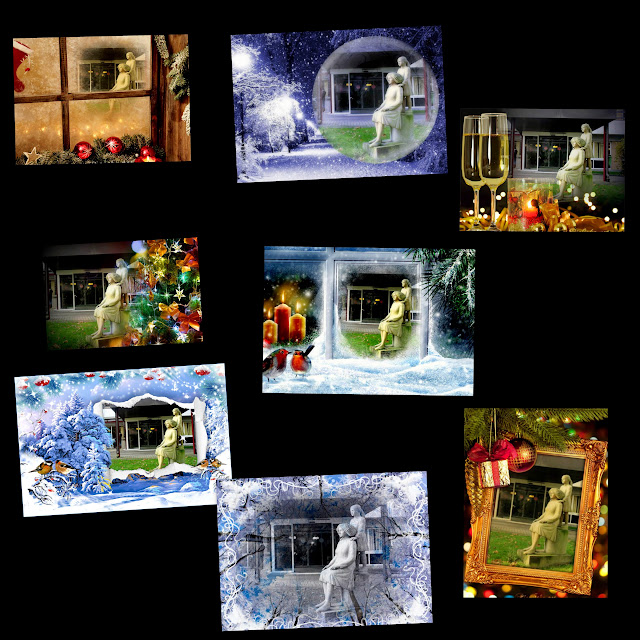 For the Waterloo retirement home in which we have our painting classes, the manager had asked me if I could make a Christmas Card. I was quite pleased that he had asked me, I had already done the poster for our exhibition. Now I will see if he likes one of my projects or if he prefers a painted version.

I am also thinking about the approaching Christmas and gifts to buy. Only a few years ago I did that with pleasure and it was fun to choose gifts of which I hoped they would please. Now, I can't choose anymore I get a list, everybody has everything and don't want to have things in double or triple ! Christmas shopping has become a burden, a must because it is the use to offer something for Christmas and I refuse to put envelopes under the tree !