1. It starts to be very windy and very wet too. In short it rained every day. My asthma which I had since beginning of this year had completely disappeared in the dry climate of the South of France, and now it had come back after 4 days ! I had thought it had disappeared forever. So I have to use my puff again.

Of course it is not very inspiring to go outside, so I spent my time mostly at the computer. 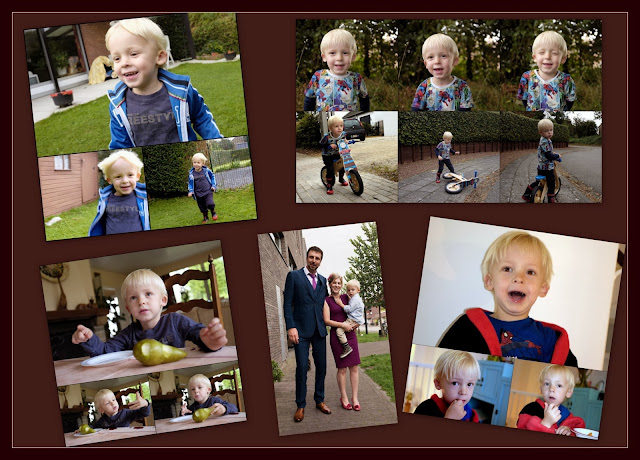 I did a new collage of Toby our grandson for the frame in the living room. He changes so quickly ! In a few days he will be three years old !

2. It had been quiet a long time since Dominique, Nicole and I had lunch together. We took the risk to be blown away and being wet like sponges and went to "our" Asian restaurant and had a very nice meal. During our chats, we decided to celebrate New Years Eve together with other friends at Dominique's. 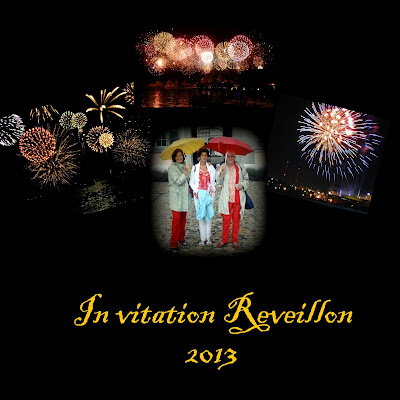 and created this, which took me some time !

3. It's rather strange that the flowers in my pots in the front yard are still blooming ! In the backyard I had already taken them out of their pots. 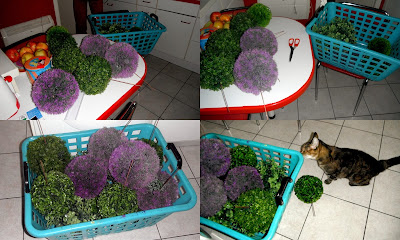 As I don't like garden work and reduce it to a minimum, I had bought these fake plants for the winter, to put in my pots in the front yard. To fix them in the pot's earth, I needed some crooked wire, which I fixed in the balls and now I only have to stick them in the pots. But first I have to take the flowers out, even if they are still blooming. I am convinced that we won't have a real autumn weather, the leaves on most of the trees are still green, but immediately go into winter temperatures and then everything will be frozen. Now I wait for a day the sun is shining or at least that it is not raining to put the plants in the pots.

4. Our deep freezer had a thick lay of ice and needed badly to be cleaned and defrosted. During the whole week I composed meals with things which were still unused. I even baked a cake, which I had done once, but it was eaten by cat Arthur because it stood on the table. This time I hid it ! The rest of the things I brought over to Dominique and then when the freezer was ready, I did a big shopping and now it is full again.

5. I had decided not to paint cats anymore, but just abstract paintings. I was so enthusiastic, that I sprayed my colors on my neighbors painting, pullover and jeans ! Even the one sitting on the other side of the table got some blue spots. We all laughed and I had to slow down and paint a little more carefully.

I don't know yet what will come out of my painting ! Ever since my teacher had told me "to free myself" I do it with my brush !
Posted by Gattina at 06:30 8 comments:

Now I am wrong again ! Last week I wrote for Y (see here) just a letter ahead, and with my personal logic, I continued to be one letter ahead that means I ended this alphabet round one week to early with the letter Z !

Raking my brain for a post with a "Z" word, I had zero ideas, which gave me the idea to write about zero. Which meant I would write about nothing ! But this was a big mistake.

After having learned that zero came via French zéro from Venetian zero, which (together with cypher) came via Italian zefiro from Arabic صفر, ṣafira = "it was empty", ṣifr = "zero", "nothing" which was a translation of the Sanskrit word shoonya (śūnya), meaning "empty",  I was breathless and thought it would become a very difficult post.

Having read about "zero" in Egypt, Mesopotamia, India, China, Islamic world, Greeks and Romans, my general knowledge seemed to be improved, although I have to admit that I nearly fell asleep.

I learned that the first known English use was in 1598, which was rather late compared to the above mentioned countries.

When I started to read the zero use in math, where I had always been a zero at school, I thought that now at vintage age the part of my brain concerning math would have improved, I tried to understand :

Please read zero instead of O

I can understand if you just skip this part.

So I came to the conclusion that for me zero is a person who is a zero in something  like me in maths or if I have 1 Euro and add a zero then suddenly I have ten Euros and if I add even more zeros I would be a rich girl.

I think now I have understood the meaning of zero. 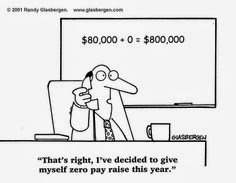 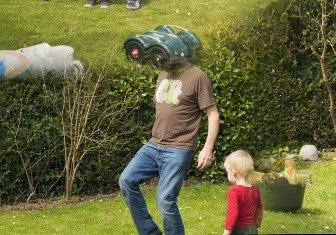 Result of an automatic collage (head was replaced by the lawn mower robot)
Posted by Gattina at 06:30 13 comments:

During my stay in Ollioules in South France, my friend took me to the Mediterranean Park at Six Fours a little village nearby. The name is rather funny because it means "six ovens". 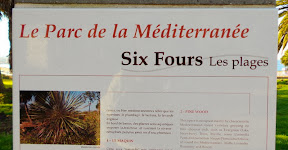 The park is beautiful in its partly wilderness and botanical gardens. Read more here
Posted by Gattina at 06:30

Since I started blogging in 2006, I participated in this peace movement created by Mimi Lenox. (Peace blog here) Each year there are more and more participants. People cry out for peace. But nobody listens and I get the impression that there is less and less peace in the world. And for what ? For business, for petrol and religion in the name of God /Allah (God in arabic) I am sure that whatever religion you belong too or not, all these wars are certainly not in the name of God, but rather an insult to God/Allah.

If you participate leave your link at Mimi Lenox Blog here

Weekend report below.
Posted by Gattina at 06:35 10 comments:

MY WEEKEND OF NOVEMBER 2

On Saturday I was in a creative mood. As I had to prepare a Birthday gift for Dominique  I choose a picture from our holidays together at the Geneva lake, 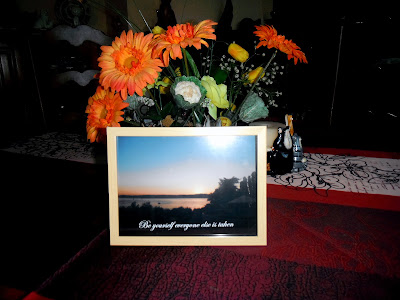 put a quote on and framed it. When she came over in the morning to pick up her two birds which Mr. G. had babysit during her holidays in Rome, I gave it to her and she liked it very much. It is a sunset I observed from the terrace of her house in France.

Then I had a look on my season basket, still decorated for summer, and I thought it would be time to change it into an autumn look, which I did, although next month I can start again with Christmas decorations ! 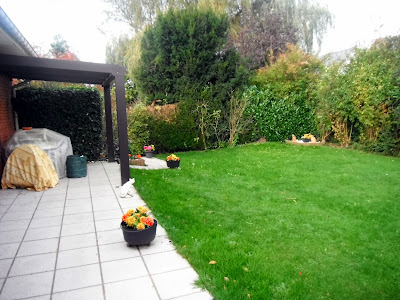 and as I still hadn't enough and the sun was shining a bit, I took out the faded geraniums and replaced them by fake flowers. Even in winter I want to have a look on flowers, with or without snow.
It's strange because in the front of the house the geraniums are still nice.

As Mr. G. was glued on TV to watch his Formular 1, I escaped to Ilona to update her on my holidays in France.

On Sunday it was pouring and the wind whistled around the house, when I woke up at 6 am ! Miss Pookie sat besides my bed and sang for breakfast. I fed her quickly and then returned into my bed. Experience has shown me that I better follow her orders and then can sleep in peace and not trying to send her to hell where she would sing until I would get up !

Fortunately at 10 am it cleared up and the sun came out, I was relieved because I had to go to the market to buy our cigarettes at half price. As soon as I sat in the bus, because it's impossible to drive to Brussels to the midi market, there is no parking space, it started to rain again. When I got out the sun was shining, lucky me. I went to the Café to meet my guy, and apparently wasn't the only one, because when showed up he greeted several other people. The Café was packed with British tourists and also a group of young German students, besides the usual clients. A vintage man played old French songs on an accordion and it was a very cheerful ambiance. The police with this cold and rainy weather preferred to stay in their heated offices and I saw none. When the weather is nice they are around, but they don't care about the cigarette seller, I even suspect that they are customers too. I also bought a warm bonnet, and then returned home. Again it rained while I was in the bus and again it stopped when I walked to my car.

But then the whole afternoon it was stormy, it rained and it was cold.

I did the laundry supervised by Princess Rosie when I put some things on the radiators.

The day ended with blogging and TV and I avoided to look outside ! Just one week ago I was in a T-shirt sitting outside on my friend's terrace celebrating her daughter's birthday in the South of France !
Posted by Gattina at 06:30 4 comments: