1. In view of our New Year's party, I did some last shopping bought paper streamers and some other little decorations. The rest of the day I spent with answering New Year wishes ! If all these wishes come true then I will be a lucky girl in 2014. 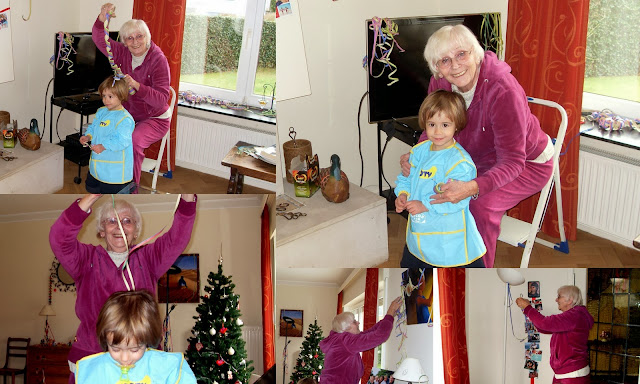 The next day I went over to Dominique to help her to prepare her living room for the party !  We had a lot of fun doing it, her little 3 year old granddaughter Lucy "helped" too, I think she had never seen that in her life ! 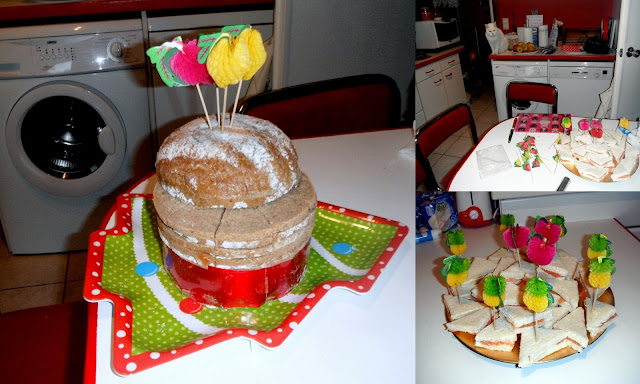 For the buffet we all had to bring one plate and our drinks. I prepared salmon sandwiches which I cut in triangles of course supervised by Arthur who fortunately had got his share of salmon before, so that I could work in peace ! I was quiet happy with the result. I had also bought a "Pain surprise" (litteraly translated Surprise Bread) a loaf of bread which had been emptied so that only the crust remains and which is then filled with all kinds of little sandwiches. 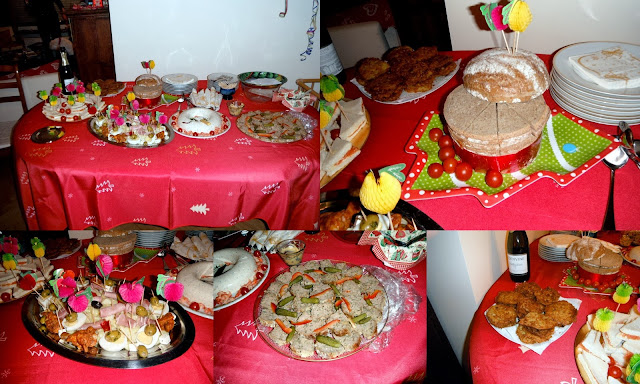 At 8 pm, when everybody had arrived I quickly took a picture of the untouched buffet ! There was my "Surprise bread", a very yummy potatoe salad, a terrine of smoked trout (the white circle) slices of meatloaf and Hungarian/German potatoe pancakes which Ilona had prepared. Unfortunately I forgot to take pictures of the delicious apple cake and the Tiramisu Chantal had made herself. 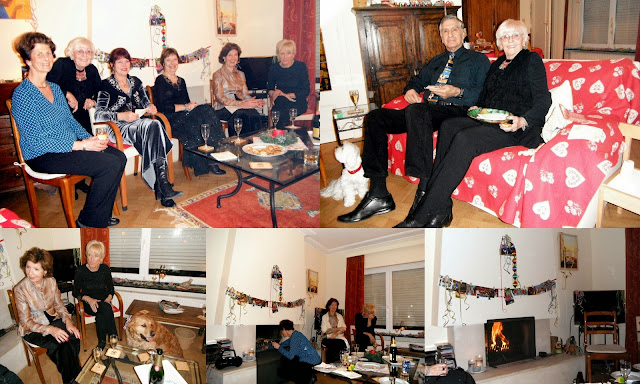 and here we are, all my friends Dominique,  Ilona, Chantal, Nicole and Marianne who is also German. We are all 70 to 76, except Dominique and Chantal ! For once Mr. G. joined the party and therefore I had asked to make a picture of us ... in memory ! 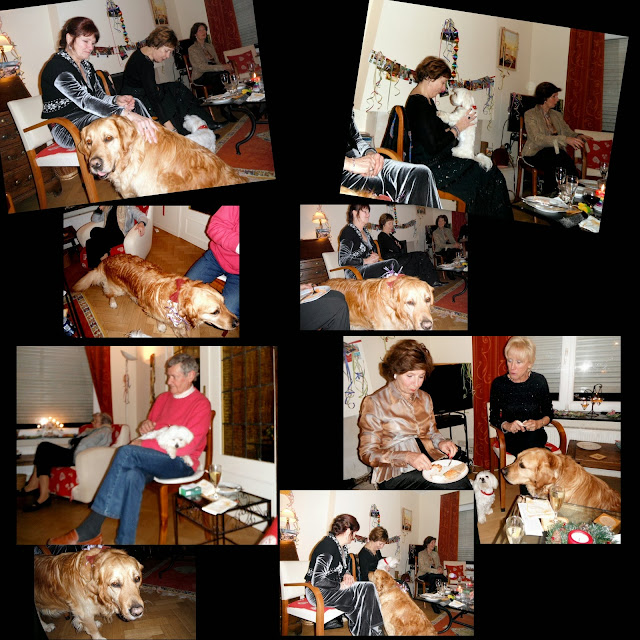 Dominique lit the fire in the chimney and dog Charly and little Kiwi were happy to have such a lot of company. Of course they wandered from one person to the other in the hope that they also got some of the food. There was an other man too, a friend of Mr. G, the husband of Marianne. So they had to endure 7 chatting women, but from time to time they also managed to place a word ! 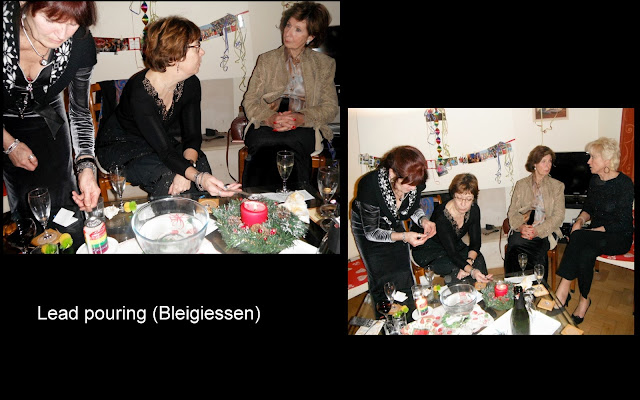 Then came the moment where we did the Lead pouring Bleigiessen, a German New Year tradition. Everybody got a piece of lead in the shape of a clover leaf, anchor, etc, which was put in a special spoon, held over a candle and when it had melted the person with the spoon throw it into cold water. Ilona was fascinated by this game and we all tried to see what figure had come out, she had an abstract looking dolphin and I a bird with strange wings. Now we have to find out what that means. I don't remember what the others had. Mr. G. made raindrops !

At midnight we all lifted our glass of champagne and wished each other a happy New Year. Poor Charlie trembled like a leaf although the 9 of us tried to comfort him but he is so afraid of fireworks. Poor boy. Unfortunately no lap was big enough for him to use, but he tried !

At 2 am we were tired, and they all went home, Mr. G. and I helped Dominique to put the furniture in place, then we left too. What a nice New Year's Eve !

5. Now all the festivities are over and we can relax again. That's what I did the whole day, I just went to Dominique to put her pictures on my USB stick, then I was busy with my photos after having watched a nice crime story and a life series called "That's your history", where adopted children tried to find out their biological parents, sometimes with a disastrous result.

More participants here at A rural Journal.
Posted by Gattina at 06:30 25 comments:


If there is something I really hate then it is Google+ ! I don't want Google+, I am a blogger and have 3 blogs which take me enough time to follow up.  Each time I get a comment and the link leads me not to the person's blog but to a Google+ page, then the trouble starts ! Where is the link to the blog I want to comment on ??? Some people don't put them on their Google + page and if you want to comment or only just ask "where is your blog ? " what happens ? You have to subscribe to Google+ otherwise you are not allowed to write a single word ! Where is my liberty of choice ? I hate to be forced to do something I don't want to do. Google starts to remind me of some Dictators !  So what do I do ? If there is no link to the Blog on that Google + thing, I just don't comment.

Anyway I don't see the use of it. Since 2006, I blog and was very happy without Google+. I don't want to join circles and I don't want to chat ! I don't want publish photos for that I have my photo blog. There is already Facebook, which in my opinion is exactly the same only older. I had to subscribe to Facebook otherwise I couldn't see the pictures my son sometimes puts on his Facebook page. Suddenly I had over 100 friends of which I didn't even know the half. 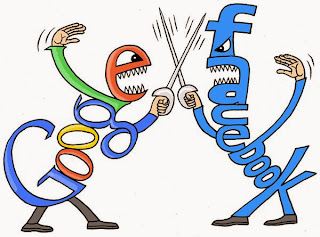 I don't deny that Google has also its advantages if he lets me in peace with his Google + ! How often I found an answer just by googling ! But when I googled yesterday for an explanation of Google + I got this as the very first answer:

【赛迪网讯】6月29日消息，谷歌今日推出了其新服务Google Plus（又名Google+），该款产品是谷歌在社交领域的第四次尝试。这也是联合创始人佩奇4月重返CEO职位以来，在社交网战略上的最重要决策。etc. (I hope I didn't cut off in the middle of a sentence !)

Very clear indeed, now I just have to learn this language to understand Google+ 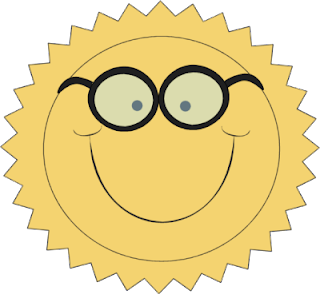 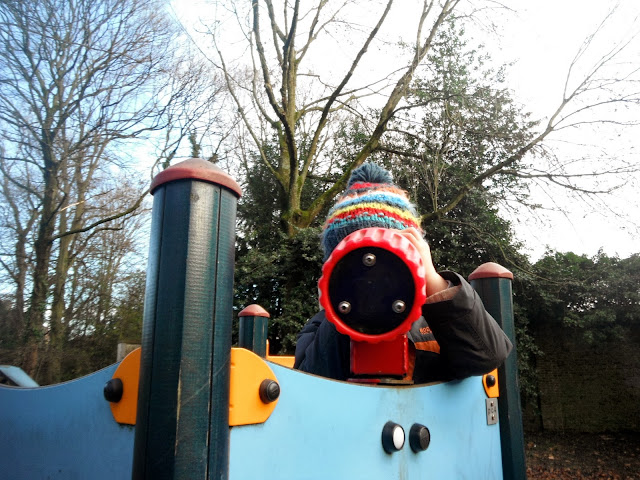 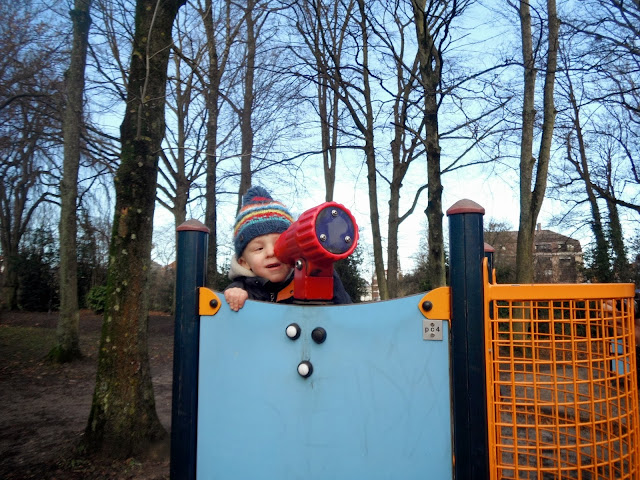 As I love to travel and visit countries and cities as much as I can, I started beginning 2013 with a visit to my friend Claudie, who lives at the French Riviera. 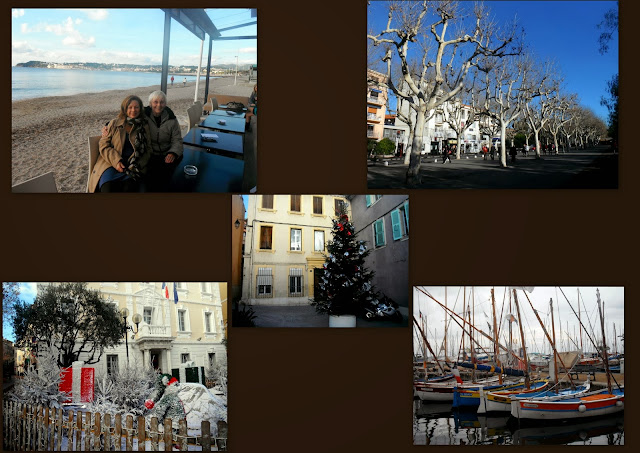 I spent New Year with her and her family

End May, my friend Ilona and I decided to make a tour around the UK. 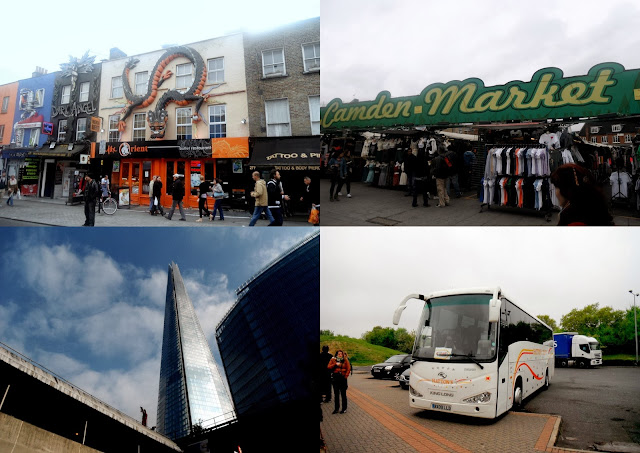 Before we started the tour, I showed her a bit of London. Next day early morning we took the Bus and started our tour. We were 10 different nationalities on board ! 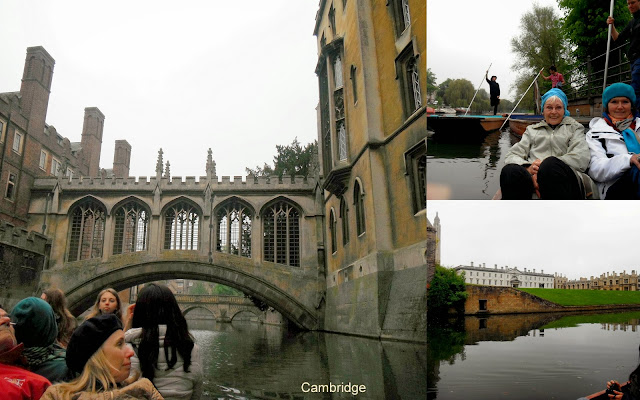 First stop was in Cambridge where we visited the town on the River cam with a punt boat. 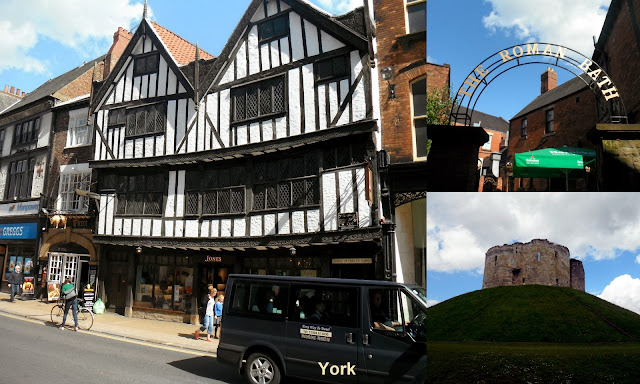 York was a beautiful town and we visited the Roman bath. 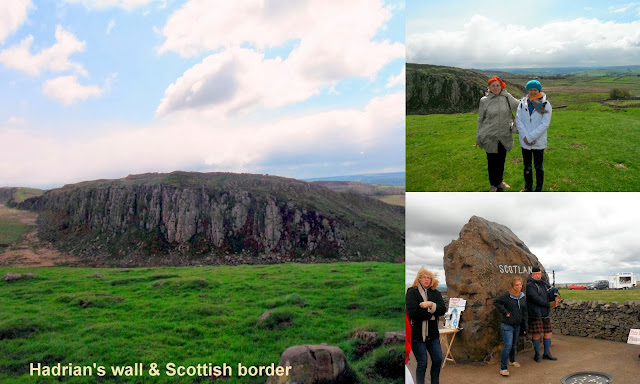 We saw Hadrian's wall and the beautiful landscape until we arrived at the Scottish border. 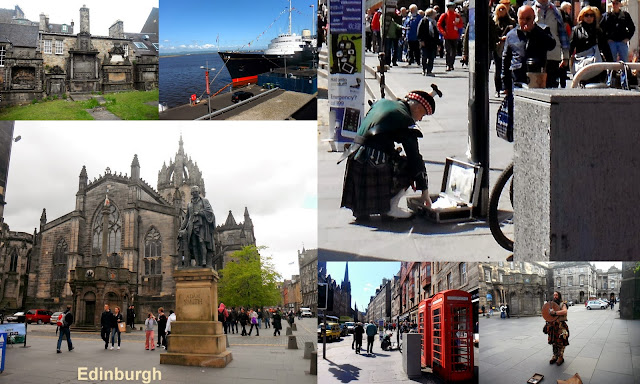 We loved Edinburgh very much and stayed there for two days. 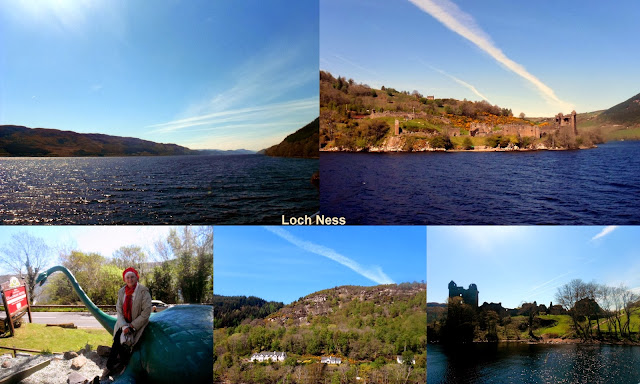 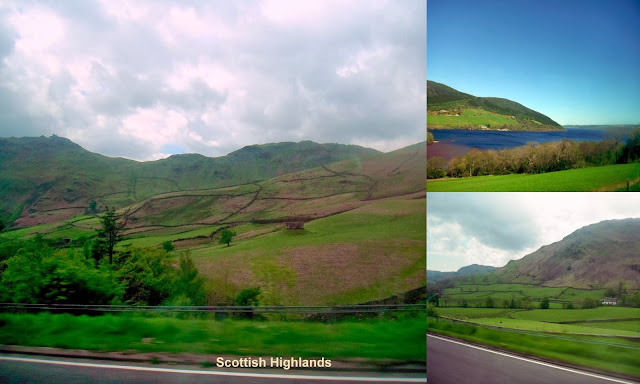 The drive through the Highlands was just breathtaking 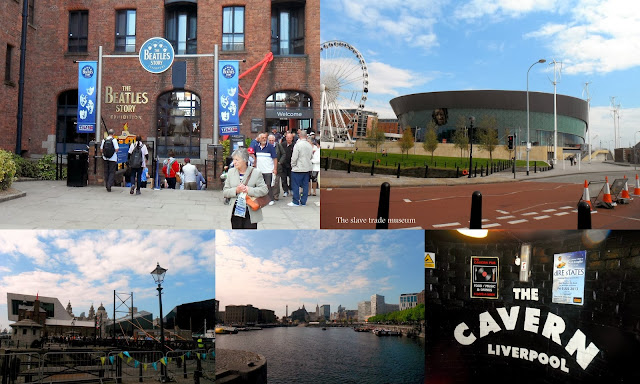 And then we followed the traces of the Beatles in Liverpool 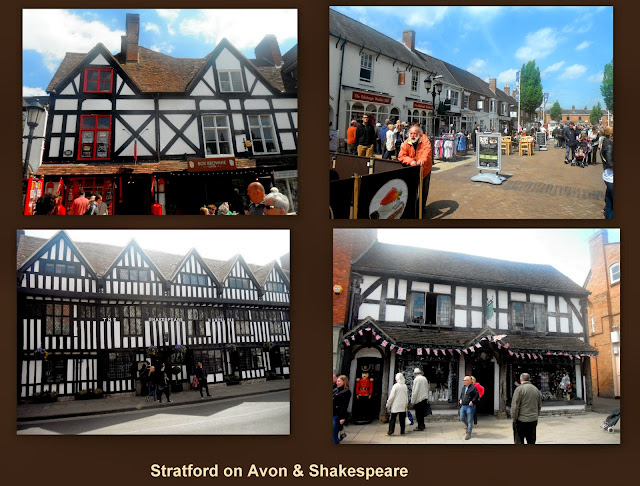 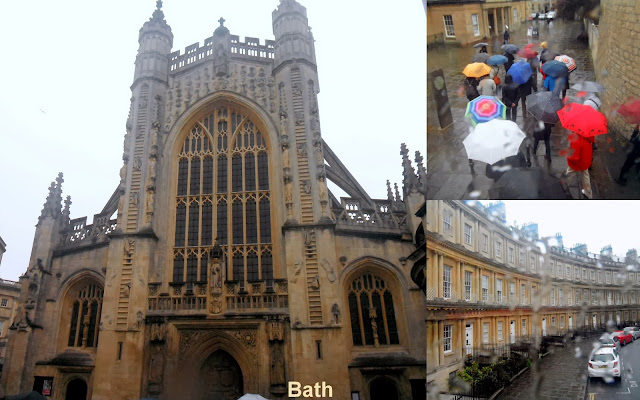 and arrived the next day in Bath. Where we literally took a bath, it poured and we didn't see very much of the city. 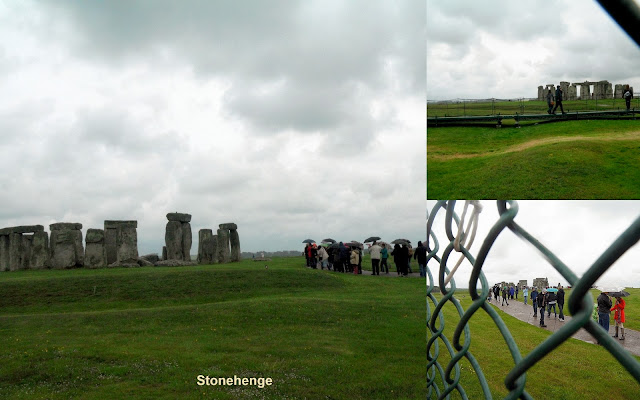 Stonehenge too, was rather wet, fortunately I had seen it the year before when the sun was shining. 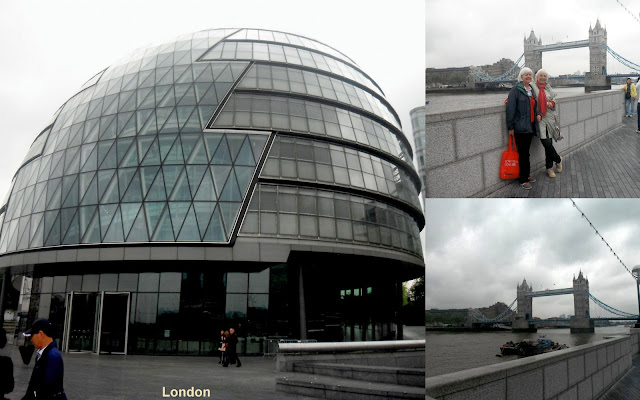 After we had returned to London we spent another day there and met Marie from After 60.

Beginning August I went as I do each year, to my friends in Eastbourne at the English South East coast. 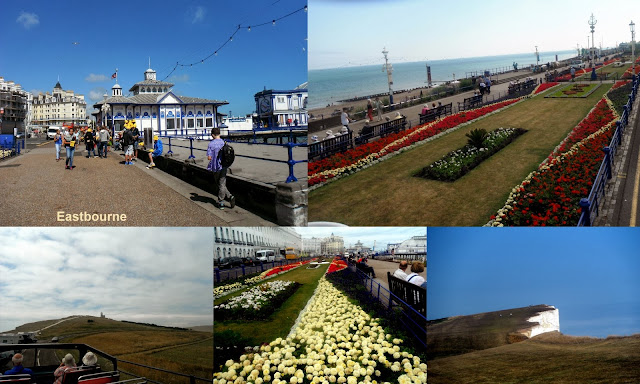 It's a beautiful place and I always discover new things to see.

On my way back to Brussels, I stopped again in London for the day, 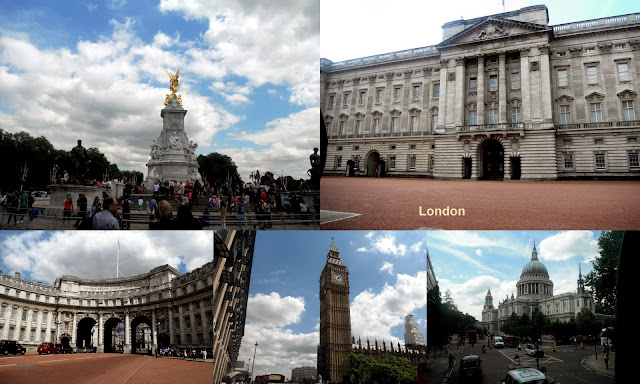 until I took the Eurostar (train) back to Brussels in the evening.

Normally in October or November I spent 12 days in Egypt at the Red Sea. But this time I couldn't due to the political troubles there.

Instead I followed the invitation of my friend Claudie and went again to the South of France end October, 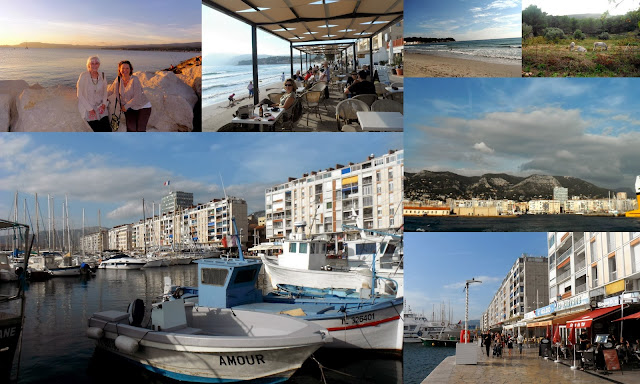 to collect some sunshine, and enjoy the exceptionally warm weather. This usually helps me to go through the dark, cold and short winter days.

MY WEEKEND OF DECEMBER 28

Friday evening I suddenly had enough of the "merry" Christmas stuff, took it all off and put it behind the sofa and on the dining table where it was out of my view. Mr. G. hadn't even noticed that I had put the Christmas decoration away. He watched TV. 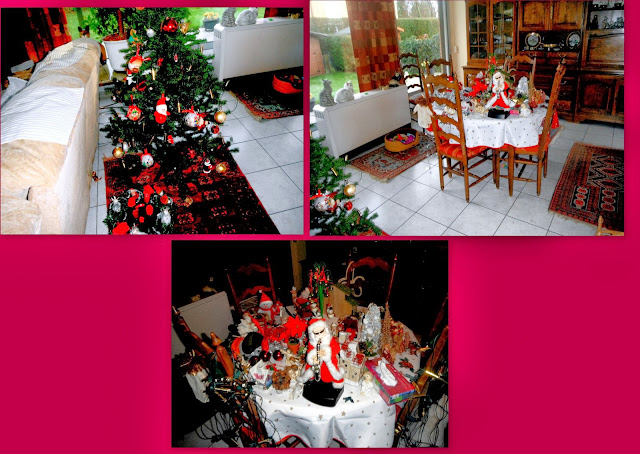 Our Living room looked then like this on Saturday morning.

I suddenly realized that we didn't have anything to eat anymore because of all this Christmas food shopping, so I did my food shopping for the week. Now the fridge is filled and Mr. G can sleep in peace.

In the afternoon I went with Dominique to Ilona, for a little chat and to exchange our Christmas gifts. She was busy with a meter and measured all her furniture, she wanted to change them to other places. So the 3 of us where thinking how we could make an old living new. We all had different ideas and had a lot of fun.

On Sunday morning Mr. G got our two old suitcases, which once had served for long distance travels. Even empty they are quiet heavy. In one I put the advents wreath and the advent decoration and in the other the Christmas stuff. 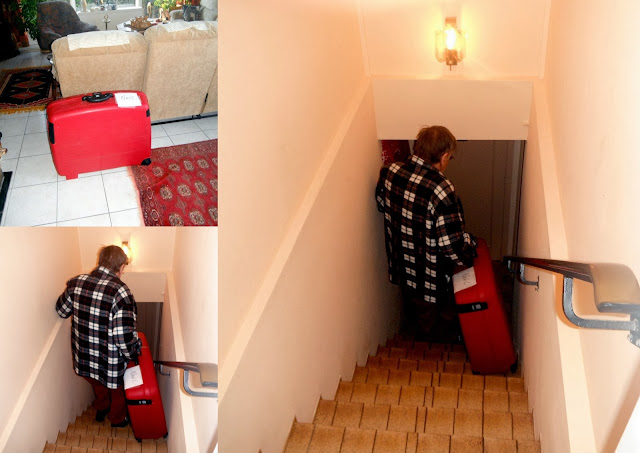 Then he carried both downstairs again and put them away, grumbling something about Christmas celebrations.

When this was done, I met Nicole on the Braine l'Alleud market, where we walked around and finally bought something to wear for New Year. Otherwise we would have had to celebrate in a Eve costume ! Of course we both had nothing to wear ! We had a cup of coffee together and she told me about her Christmas adventures. Being fed up with buying gifts for her son, daughter and very spoiled grown up grandchildren, which anyway they didn't like, she had prepared envelopes with banknotes inside. Then she had perforated the envelopes, put a ribbon in the holes and hang them on the tree. Itself a very nice idea. Unfortunately when the first one opened his envelope and took the banknote out there was a nice hole in it too ! Of course they all burst out in laughter with their perforated banknotes and told her that it could only be her to do something like that. I doubt it, it could happen to me too !