1. My week without Mr. G who is on holidays in Italy, started with garden work !

I went with Dominique to buy more flowers to plant into the pots standing on the bark in front of the house. We then had a little lunch in our favorite Greek restaurant and started both working in our yards in the afternoon. 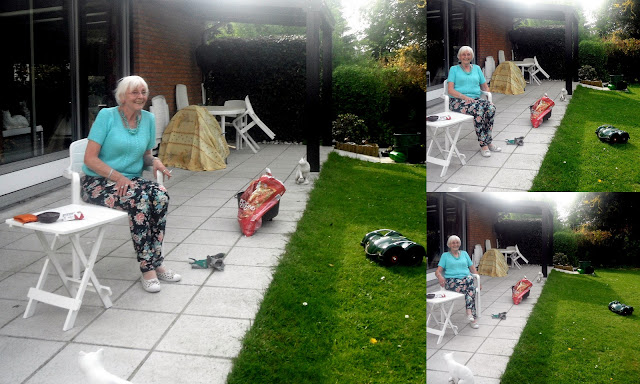 and while from time to time I made a little break, Oscar, the robot mowed the lawn ! How pleasant to watch without doing nothing !! 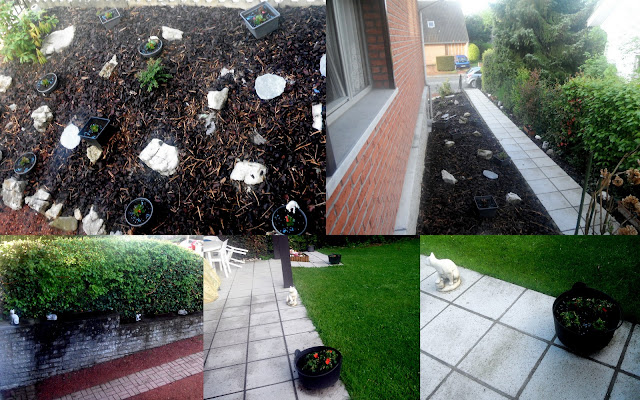 When I had finally finished, I was quiet happy with the result ! 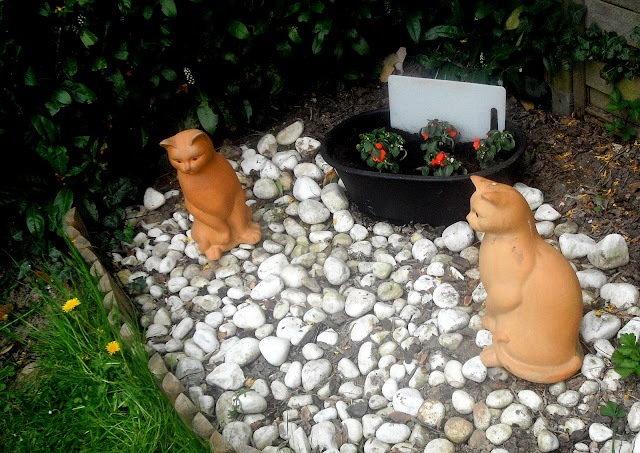 I even found a new use for an old plastic cat basket, put earth in it and used it as pot on our little grave yard where all our animals are buried.

2. The weather was beautiful and I met with a friend I hadn't seen for a long time to have lunch together. 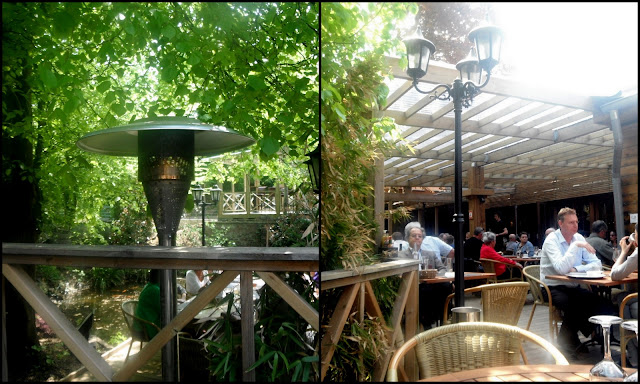 We choose a nice restaurant where we could sit outside, unfortunately we were not the only once who had the same idea. The place was packed, the service lousy, I had to call the waiter several times and the food was not good either, quiet unusual as I am not belonging to difficult clients. I can't even say that I enjoyed lunch together with her very much, as she only talked about her different booboos, and nothing else. She has changed so much and had really become an old grumpy woman.

3. Two of my flower pots had broken because of the unusual cold weather and I had to buy two new once. Instead of continuing my garden work, I landed up at Nicole's whom I had met in the same store !
She was together with another friend and we had a coffee and lots of chats together in her flat. As besides the cats nobody had to be fed, I stayed there until 7pm !

4. Her neighbor Simone (86 !), called me for help with her computer, she just had learned to use it, but had mostly forgotten everything and panicked because she couldn't read her emails. I helped her out explaining again, and she was very happy that she could use her computer again.

As I was already there, Nicole too had a problem. She had no internet connection ! I checked, and indeed there was no WiFi connection ! She had this already before so we took the laptop and wandered around in her flat and yes, sometimes the WiFi worked and then died again ! 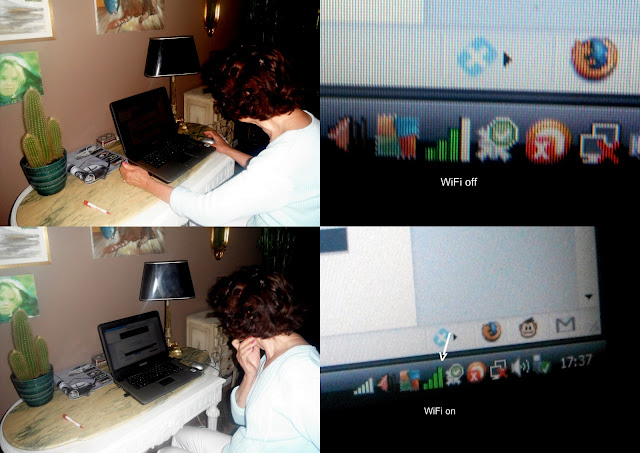 Then suddenly while she opened Firefox, it didn't work again ! And then we found out the most strangest thing ! When she put her hand besides the computer, Wifi was off, when she took it away it worked again ! Have you ever had a case like this ?? It was really incredible, and she just intended to call a technician of the Internet connection service ! When we had checked several times with our hands, we bursted out in laughter and now she knows why her Internet connection didn't work ! 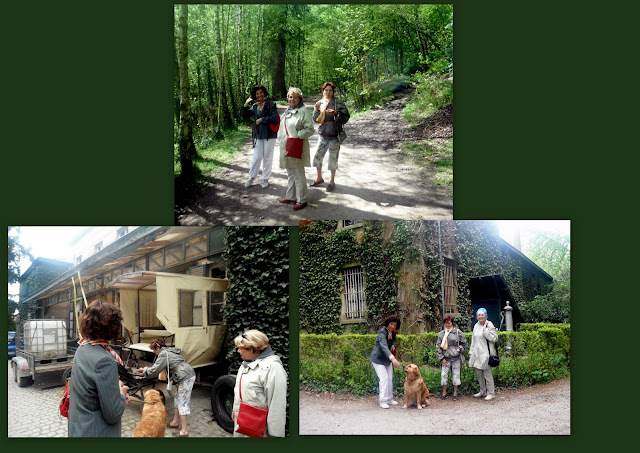 A friend of Nicole came along too so we finally were 4 plus Charlie the dog of course. We had a lot of fun ! 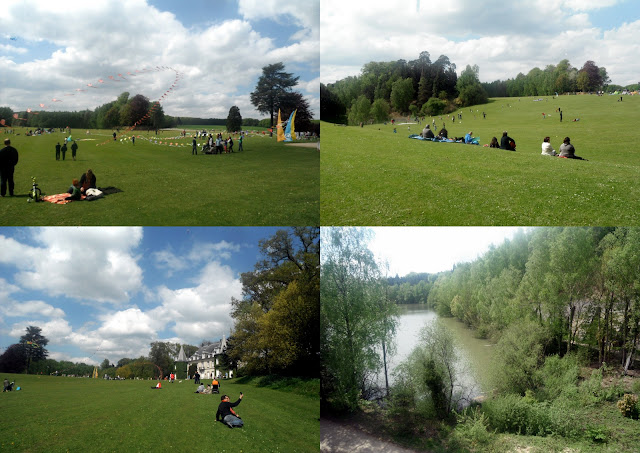 There was a kite competition going on in the huge park in front of the castle. 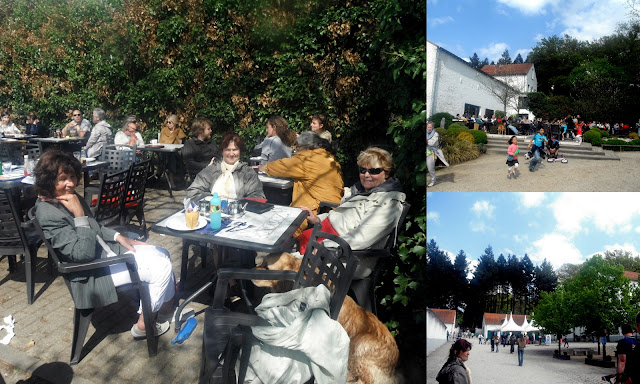 After a long walk through woods and the park we stopped at the little Restaurant to sit down and have a drink. The place was packed, it was sunny but still a little cool.

At 5 pm we were standing in front of our cars, hesitating what to do now to end this nice day and I had the idea of my life, being on holidays in my house, I invited them all for a Pizza (which I always have in the freeze) ! 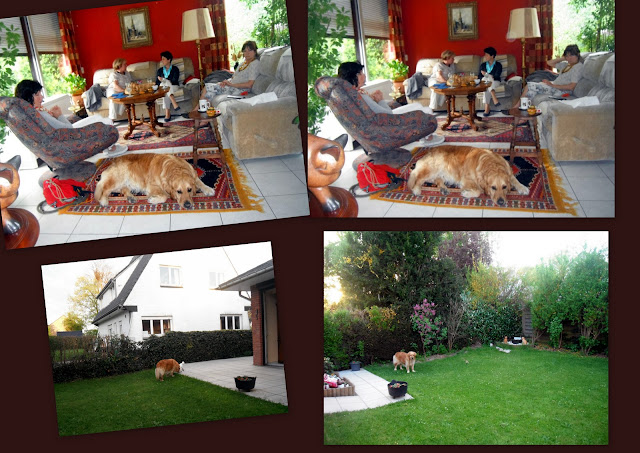 We first had an aperitif and Dominique came over too, brought another pizza and chocolate mousse and we had a very funny time. Charlie the dog inspected the garden, the cats didn't bother, Charlie is a good dog, he first sniffed in the whole house, met Arthur who just opened an eye and continued to sleep on the cat tower. The others had a look on this sweet monster and then disappeared. It was the first time that Charlie came into our house, and he behaved perfect with my 4 cats !

Finally around 10 pm they  left and I thought what a wonderful day it was, especially because this morning we had no plan at all !
Posted by Gattina at 06:00 16 comments:

I never realized how important the letter "Y" is in the English language, until the day when the Y key on my keyboard started to have difficulties !

At the beginning I hammered on the Y-key until a capital Y showed up in my text. No difficulties with the little "y".  After a while I couldn't type a capital Y not at all anymore. So please check all my comments and  you will see that after a point (.) my "y" was not in capital letter. It didn't bother me that much because I thought people could think it was a typing error. But then the "Y" key gave up its soul completely and I was without Y ! I asked myself why ?

In this text only there are already 13 Ys I couldn't have typed without counting the Y letter standing alone  ! If I want to write an email to you : My keyboard doesn't work anymore, and I have to buy a new one, I would have typed :

I could have written my posts in German or French, because a "Y" is seldom used in these languages, but then you would have to use the Google translator, which gives the most funniest results in translations. Once I sat on my computer and the cat was typing according to Google's translation.

Therefore I gave up, and went to buy a new one. 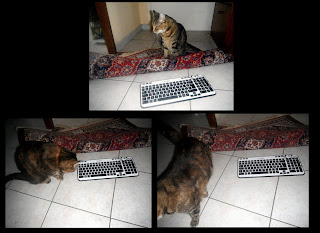 I asked Pookie to make the presentation of my new wireless keyboard, but she was very uncooperative, it was not interesting at all for her and not even useful as a bed !

But now I can write without any problem : You look tired, do you have a yucky yellow fever ? 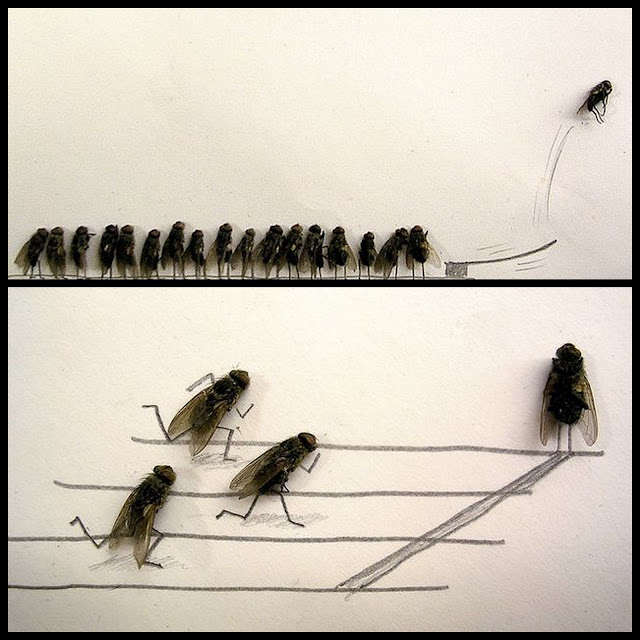 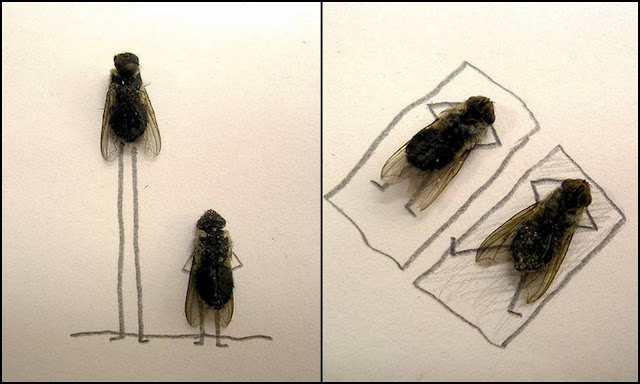 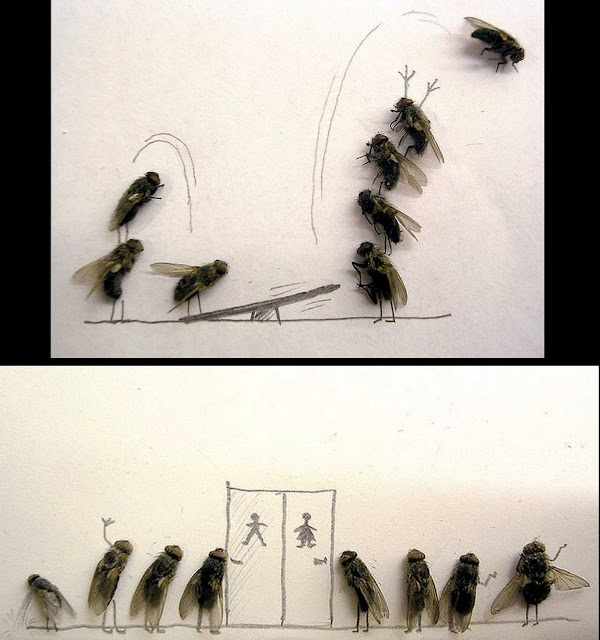 I was on a visit staying with my friend Claudie in the South of France, we had to go to Aix-en-Provence to empty her daughter's flat, as the university year is finished.

It is a beautiful city some 30 km (19 mi) north of Marseille, in the region of Provence-Alpes-Côte d'Azur.

Helps you to remember what you have done on the weekend of May 4. If you participate please put the little logo on the top of your post and leave your link.

Saturday morning I escaped Mr. G's travel fever,  he makes me think that he goes on a expedition to the moon, instead of going simply to Amsterdam by train and from their with son and grandson by plane to Italy on holidays ! But for somebody who isn't used to trains and trams and buses (which he has to take) it becomes a gigantic worry ! How can a man change that much ? He never cared before about travelling ! 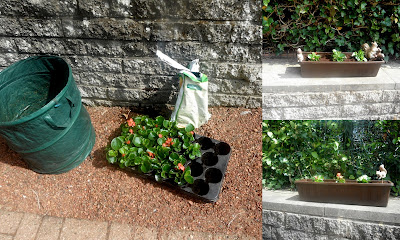 In the afternoon while he took a nap (he hadn't slept during the night) I started with my garden work !
I went to the garden center a little outside Waterloo, where I always buy my plants for the flower pots and the garden. There were so many people there, that I forgot to take pictures, choose around 40 petunias and begonias and some earth and returned home !

I still cannot understand that lots of people love garden work and even do it as a hobby ! For me it is an awful chore I have to do once a year, unless I would move to an apartment ! After having put nearly 26 plants in the pots, I had enough and stopped !

Then started the big comedy in the Italian way (I don't need to go to a theater) while I gathered all his stuff  he packed his suitcase ! Finally it was done and I was exhausted and collapsed behind my computer to rest !

On Sunday morning we drove to the Bus station and I went with Mr. G. to the Midi Station 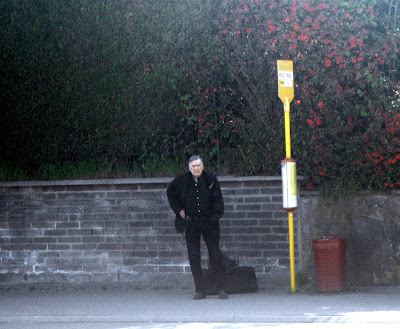 I don't have to explain anything about this picture, it shows it all ! 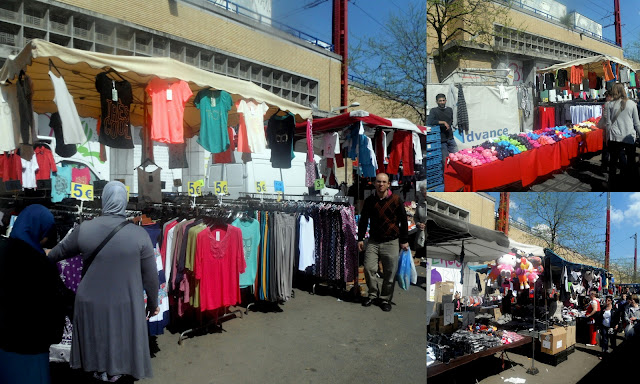 After having left him in the station, I went for a walk through the market ! The sun was shining lots of people there, and I had a well earned drink in a café sitting in the sunshine and chatting with other people ! 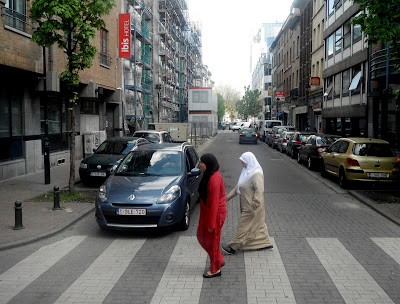 We have a big community of Moroccans living in Brussels. Most of them were already born here and I wonder if they ever had been in Morocco !  I noticed that since wearing scarfs at school is not allowed anymore,  there are more and more Moroccan women wearing scarfs and long dresses, what they haven't done before. They liked to dress like Europeans. I have been several times in Morocco and never seen so many women in this clothing, they were even wearing mini skirts  in big towns ! I doubt very much that they are all muslims ! It seems rather like a protest to me ! 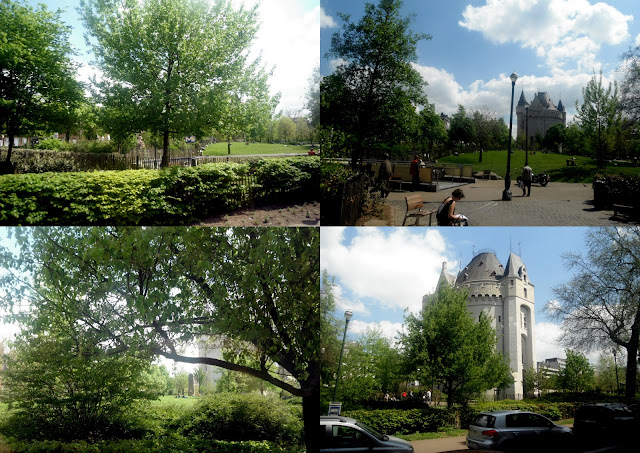 The park around the old tower of the city wall was full of people who lay on blankets on the grass and enjoyed the sunshine. 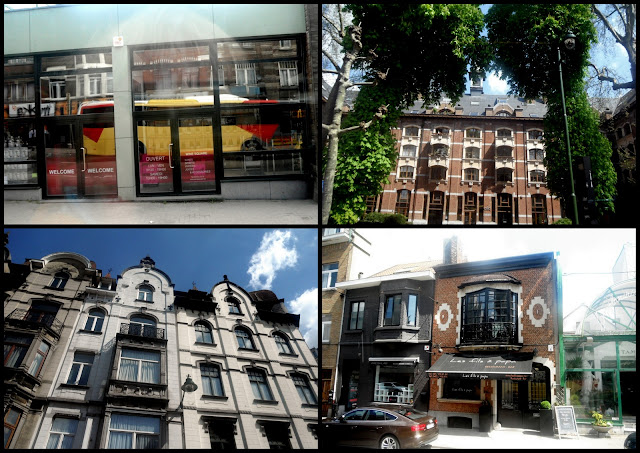 I like riding in the bus, because it takes me through old Brussels municipalities, where fortunately the old houses are still standing and haven't been demolished in the 60th as so many beautiful mansions in the center of Brussels. 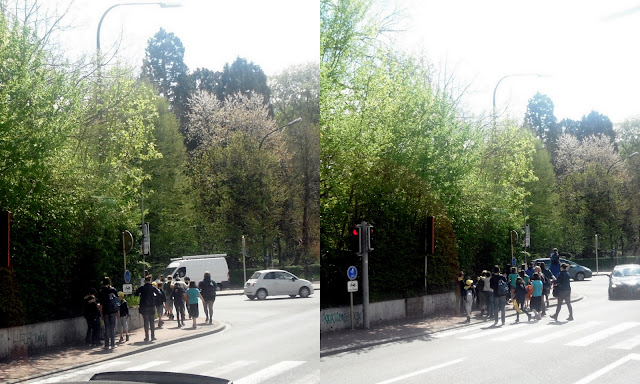 I also saw a group of scouts entering the Bois de la Cambre which is a huge park with woods in Brussels.

After lunch I continued my garden work ! 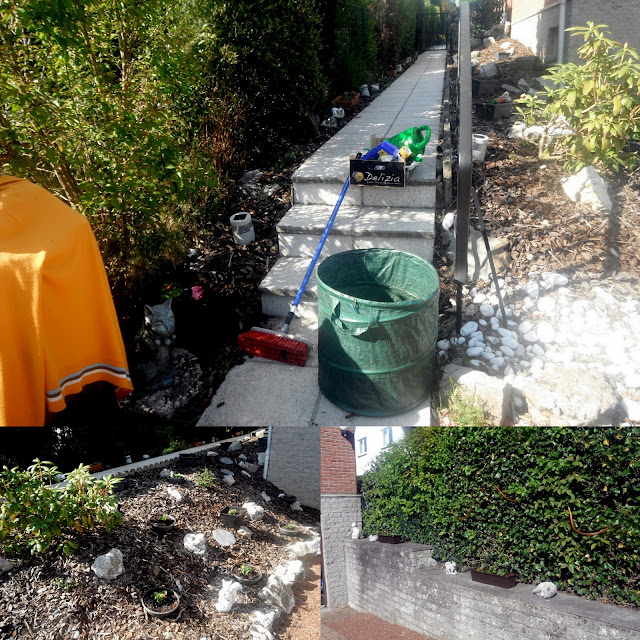 After a couple of hours I was KO and happy that I run out of plants !

I took a nice relaxing bath and without looking at the watch I ate my supper ! My life as a "merry widow" has started !