The warm weather continued also this week, unfortunately with a lot of thunderstorms and flooding in some parts of Belgium. Fortunately in my part of the city there was nothing besides the noise and buckets of water of course, but never for very long.

Mostly dogs but also cats suffer terribly from these weather because they get hysterical with the thunder. So far my cats ignore the noise, I think they are used to it by now.

My friend and I are still busy with this dammit Russian Visa request. Forums and helplines are full of people who have the same problem. The password you have to give is not accepted. They want a numeric symbol and an alphabetical symbol. I googled to know what this is exactly, and it's just our numbers and the letters ab. Maybe because they have the Cyrillic alphabet The Russian alphabet
А а Б б В в Г г Д д Е е Ё ё Ж ж З з И и Й й it doesn't work. 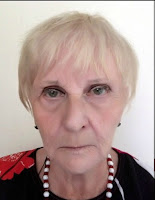 We have all requested documents. And also two passport pictures where you look like "wanted" because you are not allowed to smile ! We all look awful just like criminals !

We decided to go to the Visa center and ask to fill in the form. Another day lost, not completely because my friend and I after many attempts had still time for a drink.

For the moment as two of my scrabble girls are still on holidays, we scrabble on Wednesdays or Thursdays. We had real holiday weather and could scrabble outside on the terrace, it was almost hot ! Ilona was there too, so we were four and this time she lost. I was second from the end. 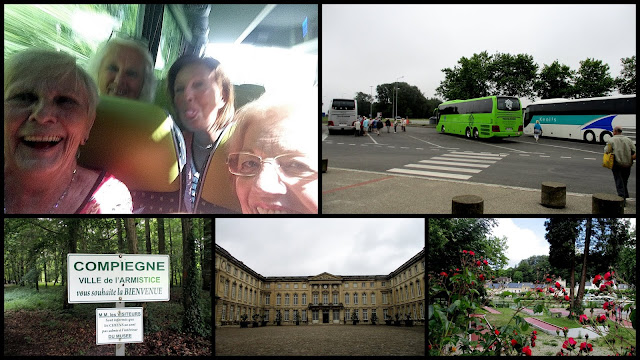 In between we had a wonderful meal. 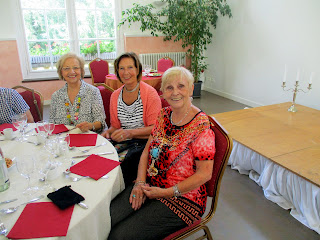 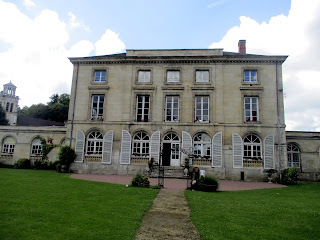 in this beautiful restaurant, with a huge park around. We were four, Myriam took the picture, Monique, Nicole and I.


It's always very well organized. And we enjoyed our excursions very much.

more participants at Susanne at Living to tell the Story.
Posted by Gattina at 09:07 16 comments: 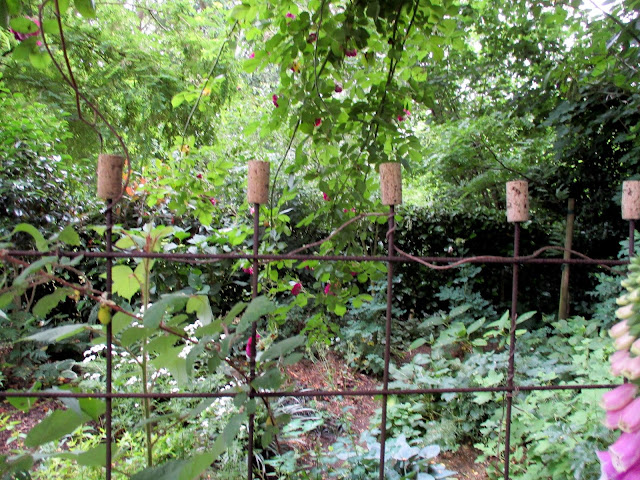 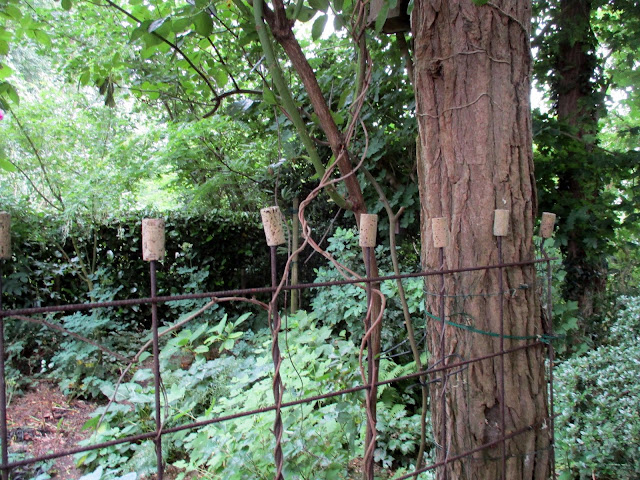 
1.Describe your 30's in one sentence. If you're not yet 30 tell us one thing you hope to accomplish once you hit that particular decade. 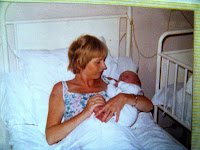 2. Is it harder for you to exercise or eat healthy?

I do both, so it's not hard at all. I do Yoga exercises each morning and once a week aqua gym, I hate greasy and sweet things, but like vegetables, and salads.

3. June 7th is National VCR Day. Huh? Anyway this reminded me of something I saw on Facebook listing household items we no longer have and the VCR was on it. I couldn't put my hands on that list, but found another list here of 21 items we all had ten years ago, but which are now obsolete-
bookshelves (WHAT!!???), drip coffee makers, alarm clocks, file cabinets, desktop computers, printers, printed phone books, answering machines, fax machines, paper shredders, a Rolodex, CD racks, CD burners, china cabinets, home phones, entertainment consoles, DVD players, calculators, takeout menus, incandescent light bulbs, and cable TV

Your thoughts? How many on the list do you still have? Still use?

My thoughts ? That was a lot of things we had ! Of course now I have a coffee machine, but still an alarm clock (as decoration), a printer, a paper shredder, a home phone with incorporated answering machine, a calculator, and we have cable TV already since 1953. Belgium was one of the first country in the world to be "cabled". In addition we also have digital TV of course.


4. What's something you see disappearing in the next ten years? 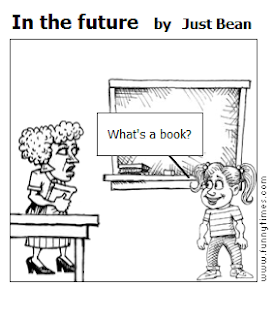 5. How did you celebrate your birthday this past year ? Is that typical?

I think I invited my best friends for a cake and drinks, it is not really typical, in fact there is no rule. On the weekends before or after my birthday I usually celebrate with my son and family.

How to dress ? It's cold and warm and I don't like to change several times per day, and how to fill in the form for the Russian Visa and then check where I have to go with all documents and papers the ask for ! The embassy doesn't make Visas ! 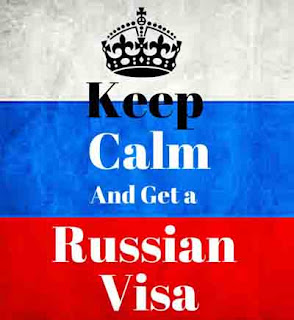 During the weekend a "Garden Show" was organized in a street of Rhode St. Genèse, part of Brussels. Everybody could participate and show his garden. The most beautiful one got a price.

My friend Myriam's sister in law participated too and I have to say I have never seen such a beautiful private garden in my whole life.

It was not a traditional garden with flowers shrubs and hedges and a lawn in the middle, but a very messy garden where flowers, shrubs and trees grew in apparently disorder. But for those who know about plants it wasn't in such a disorder, only it looked like and this wilderness made it so charming and beautiful. 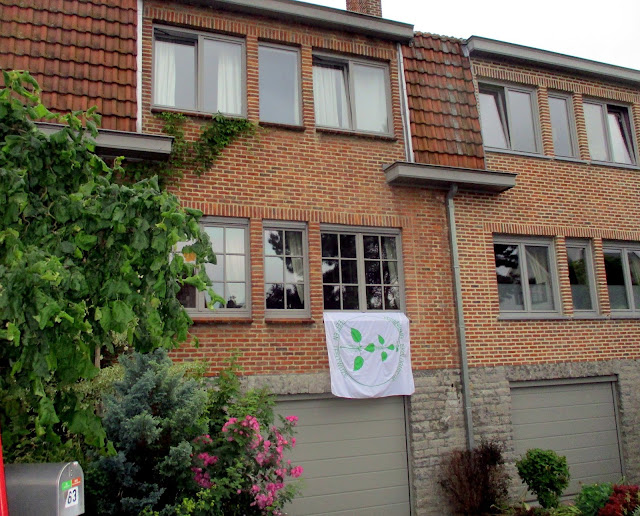 This was front of the house 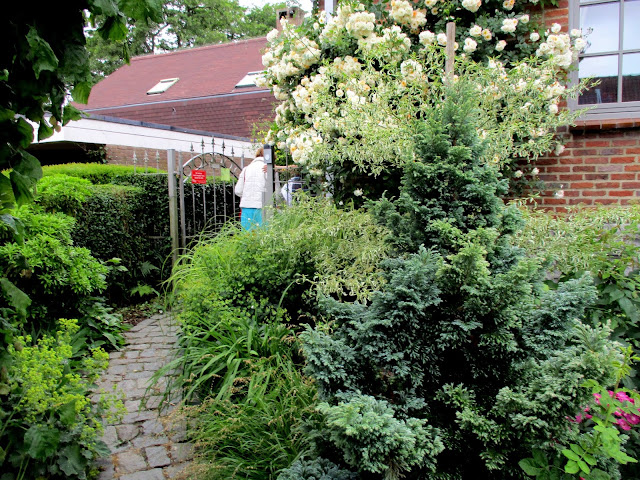 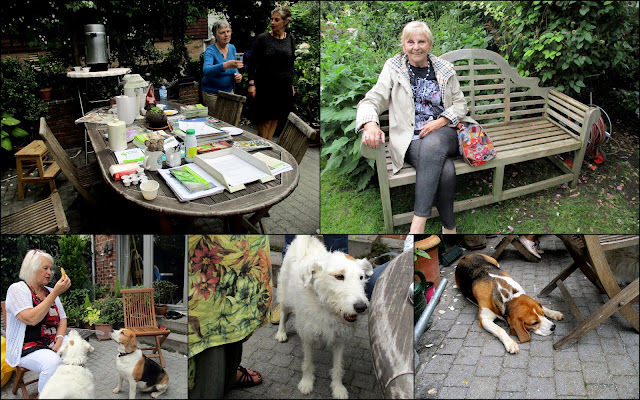 Coffee, juices or water was served to the visitors and also some cake, which was very much appreciated by the two dogs of the house. 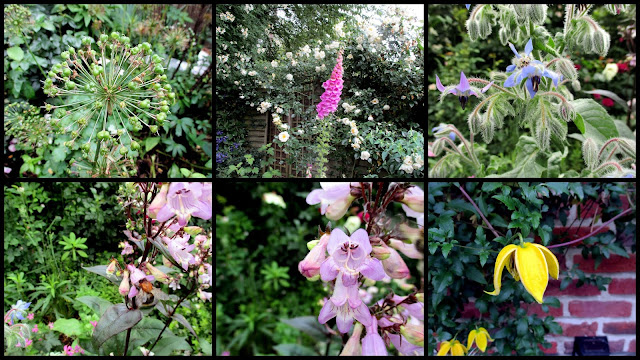 Here is a selection of flowers 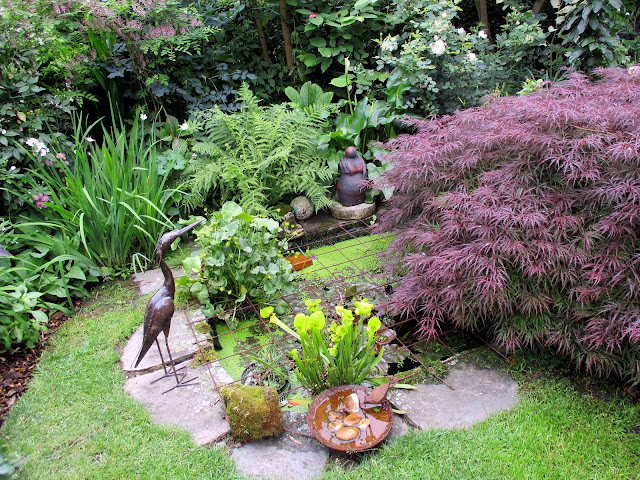 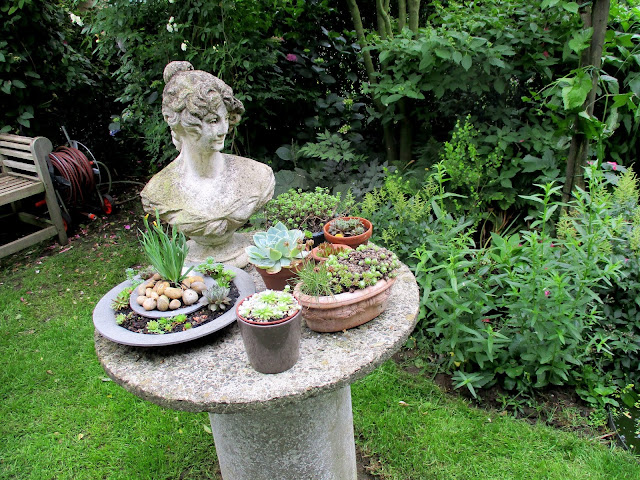 interrupted by some decoration 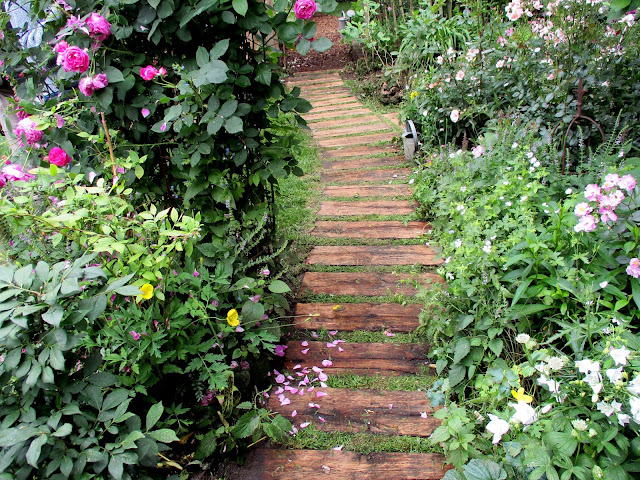 The way through the whole garden was made of old wooden railway ties. 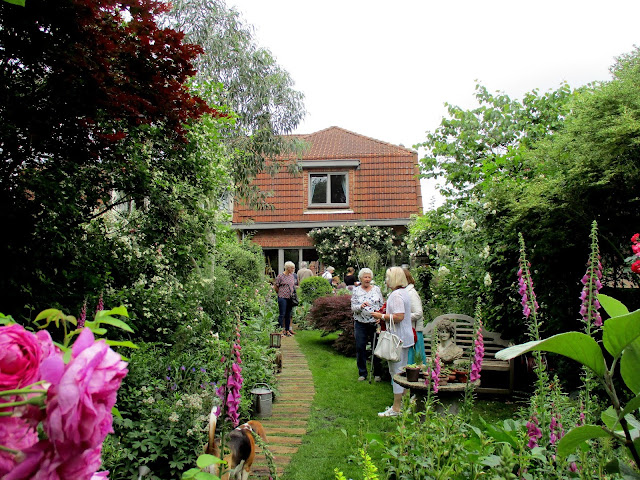 Myriam is talking to her sister in law 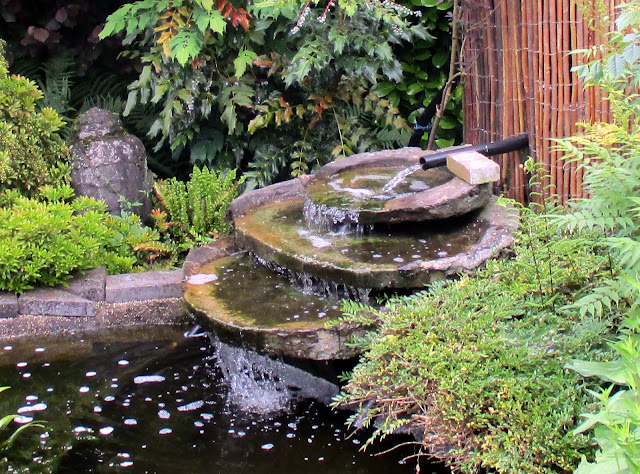 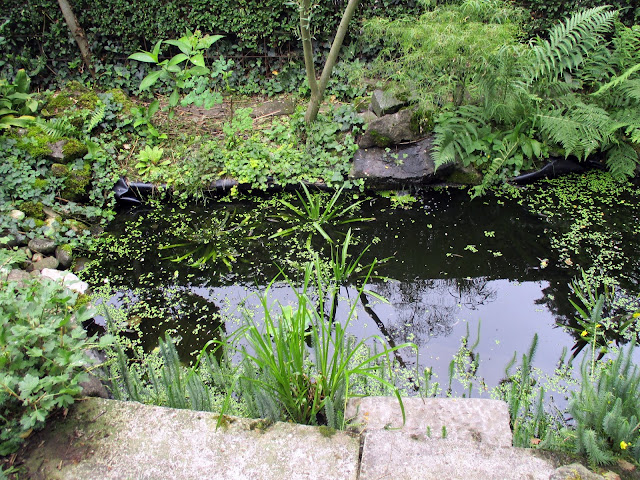 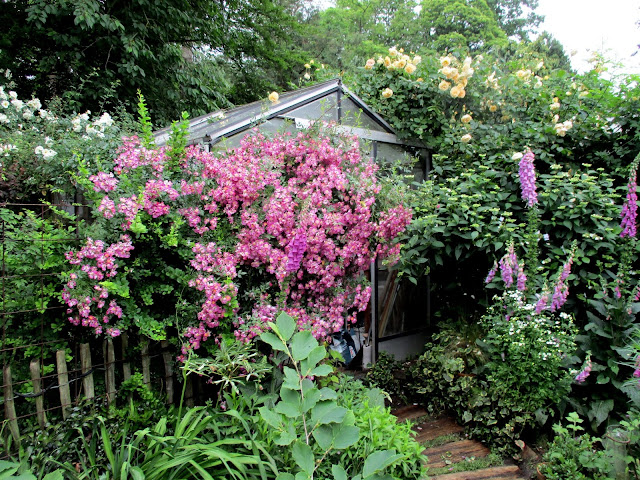 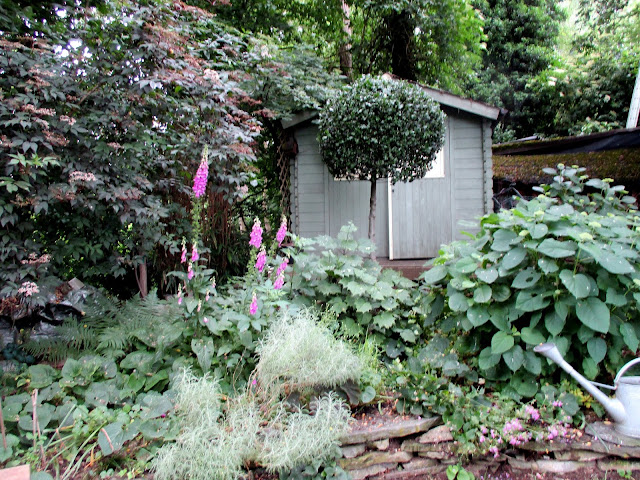 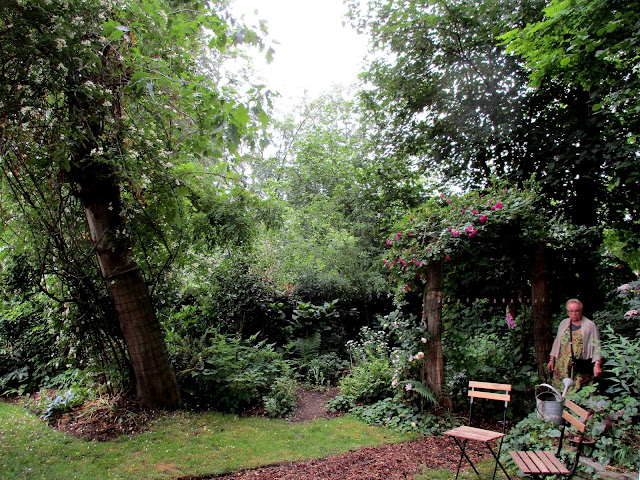 some chairs to sit down 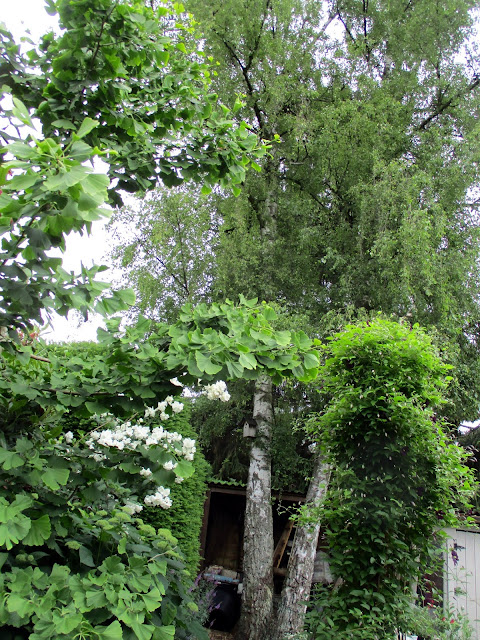 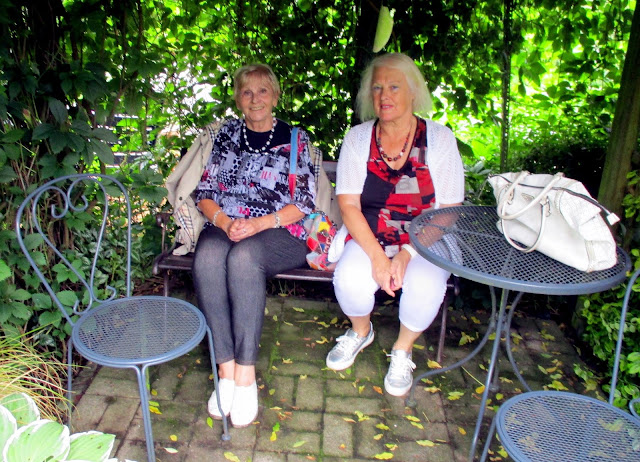 Myriam and I sat on a bench 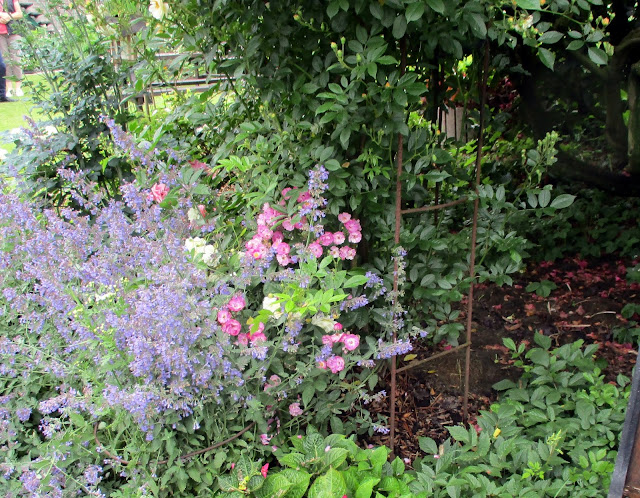 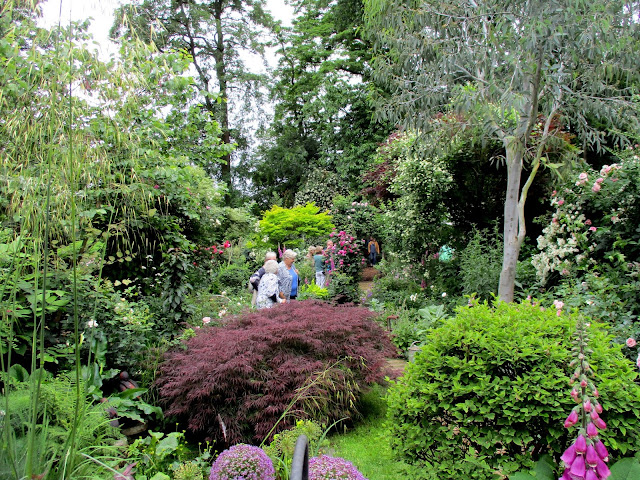 We spent at least 2 hours in this garden it was so unusually beautiful in its wilderness.

I don't know anything about flowers or plants, but I appreciate their beauty very much. After a cup of coffee and a piece of cake we left and returned home.

As it happens so often, when the weekend arrives the weather changed and the temperature dropped and it also rained.

Therefore we hesitated to go to the Waterloo Apero, because the grass was wet and it was rather cool at 5 pm. But we didn't want to give up our meeting and we choose a nice and cosy Brasserie called "The Apple" 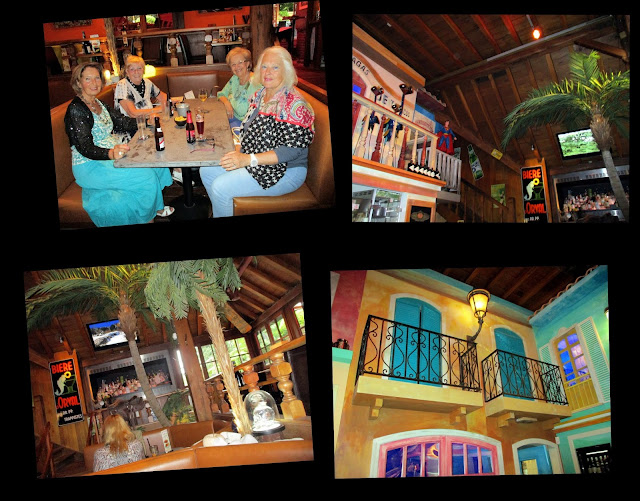 It had been quite some time I hadn't been there, and Monique although she lives in Waterloo since over 30 years had never been in there. We had a lot of fun especially when I talking with my hands knocked over my glass and the beer flowed over the table on Monique's lab. Can only happen to me. The waiter cleaned the table and I got a new beer. At 7 I went home, because Mr. G. was waiting with the supper while the others went for a Pizza there was no man waiting for them at home. And they stayed until 11 pm !

After having got rid of household scores, we went to a garden show (yard) nearby. 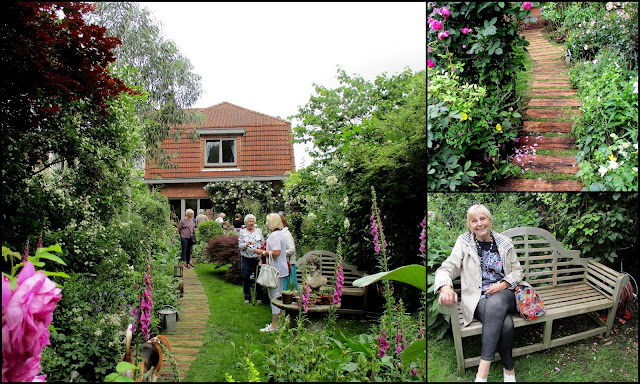 I would have given her the first price ! Her garden was absolutely gorgeous. I will write more detailed and with more pictures on Tuesday for "Our World". I had never seen such a garden in my whole life ! It was a sea of flowers, blooming shrubs and plants I didn't know at all ! I could have stayed there the whole day ! 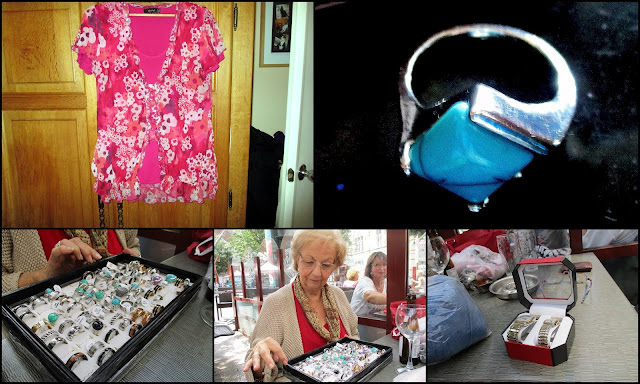 Sunday morning Monique and I went to the market in the next little town. Nicole joined us there.

Monique had never been on a market to buy clothes and couldn't believe how cheap the prices were ! She even found a brand she always buys in a boutique for a lot of money while here she could get it for 5 Euros ! We laughed because the cardigan she wore and which was rather expensive she could have  bought it on the market !  There was the same brand !!

Nicole bought a blouse and a pullover and Monique too, while I bought the red blouse you see in the picture.

When we sat down on a terrace happy with the things we had bought a huge black man came with rings, bracelets and watches.

I think we were quite noisy because we laughed so much when Nicole tried to haggle and Monique couldn't decide which ring to take. I took the one in the picture, they were all for 10 Euros. That was really a lot of fun. Then she also bought a watch, and as there were two in the box one for women one for man, she offered the one for man to Mr. G. He likes to collect watches.

The afternoon was warm again and I could blog outside.
Posted by Gattina at 01:58 4 comments: