Another day of confinement, and the sun is shining and everybody wants to go outside to get something from the sun and the fresh air. But we can't we are not allowed to go out for our own protection and it is really not nice of the sun to shine now when we are all locked in, while it rained for weeks when we were free.

I am lucky, I live outside the big city Brussels, I have a garden and could walk or sit in there, I even could do some garden work ! I am so free as a bird in a big cage. But the poor people living in a multi store building in small apartments with a bunch of kids it must be hell to keep them inside.

We never had a natural catastrophe here were I live. Not even a flooding or a hurrican.

And then arrived this vicious virus brought into all European countries by travelling tourists just after the Carnival holidays. No country escaped and then it went across the whole world to all other continents not one corner escaped. This had never happened before.

All other catastrophes were local like theTsunami, or hurricans etc.

But now, even the politicians in the whole world are not protected by an army they are as helpless as we are.  And there is nothing to do against. We can go on the moon but we can't kill a little virous ! A lot of money was spent on the discovery of the outer space and to be able to walk on the moon instead of taking care of our planet and the healthcare has been rather neglected in many countries. Everything was more important then the health of the people.

Now those we have elected to govern the countries are also sitting deeply in the sh...t and some of them even got the evil virus.

The world will never be the same after that ! Nature has send us a spring cleaning (or an intensive cleaning) for the whole world !

In Venice the canals are blue again and even Swans are coming back. Never seen birds are suddenly in the parks, animals who hid from humans are coming out. Now we are in the zoo behind grids and they are watching us.

The streets are empty, the air fresh, no smog anymore, our world has never been so clean since ages. 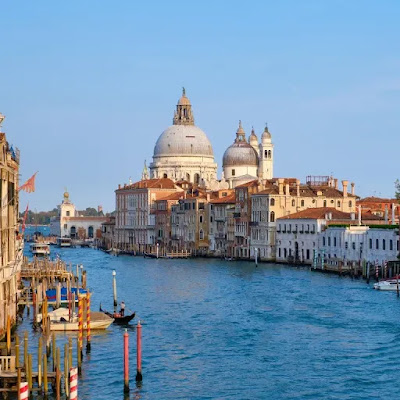 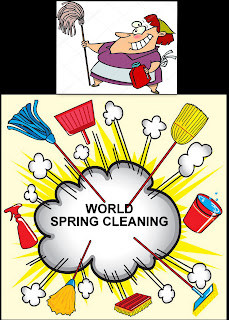 Linking to Linda H.Hills SOCS-deep
Posted by Gattina at 12:31 6 comments:


Another week went by with a few more dead and a few more people infected. I am always angry with the Belgian Television News because they never tell how many people have survived the virus and could go home. Fortunately there are other sources so we can be a bit more hopeful. Apparently the situation is slighly better, and we all hope that by April 18 they will start to release us slowly slowly.

Monday afternoon the sun was shining but it was quite cool. We met at Myriam's wanted to play scrabble the three of us, but then preferred to chat. Outside it rained cats and dogs and it was dark. The confinement rules in our area are well respected and the police doesn't have too much to do. Sometimes a few youngsters who a gathering and are too close together, but usually after a warning they behave.

To comfort me a little, I got an email from our Estate Agent, that he had an offer for our house. He forwarded it to me and I checked, it was OK there were only two little things which I didn't like. But this couple is so interested to buy our house that they agreed to everything and sent a rectified contract.

I was very happy. Mr. G. was more interested in the apartment which I had found and where he would live and when he realized that it was in the middle of our little town, near his Whist Club and friends he was happy too. 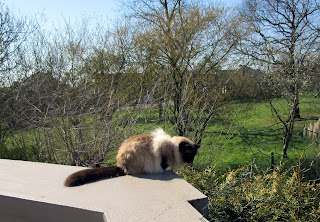 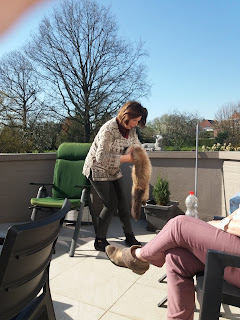 The next day the sun was shining again and we met at Nicole and sat in the warm sunshine. Cat Isis was sitting on the wall and we thought she would jump one floor deeper into the garden, Nicole picked her up, and put her down,  but she returned immediately and continued to observe what she had seen. 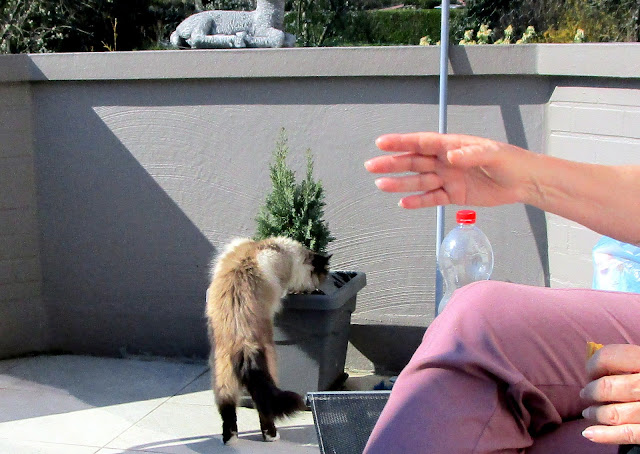 Nothing interesting in the flower pot. 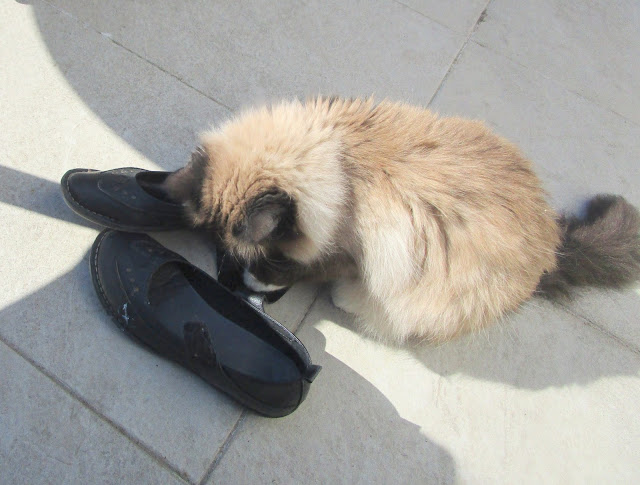 My shoes were very interesting to play with again. The air was a bit fresh, but in the sunshine it was nice and warm. The world seemed to be nearly normal again.

Suddenly I smelled smoke and thought somebody made a barbecue, but at 4 pm, was a bit strange. I looked around and in the garden beneath Nicole's terrace a stub of a tree had started to burn ! 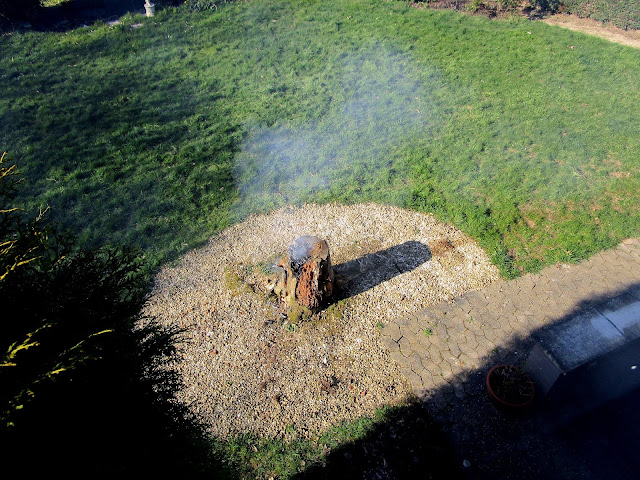 The neighbor had let his dog run in the garden, and had smoked a cigarette. He hadn't thrown the cigarette on the ground, but apparently a bit of ash has fallen into this very dry stump. Nicole called the neighbor and both came with buckets of water to extinguish the fire. Of course it smoked even more. Later we checked again, but the stump was so wet that no flame had a chance to become a fire. Now we saw life how it can happen so quickly and with just a spark of glowing ash !

Today we signed the agreement for the sale of our house and I sent the signed copy per email to our agent. So at least the paper work is done. We can't go to the notary of course because her office is closed. We have to wait until the confinment is lifted.

But I drove to two apartments which on pictures looked real nice and were located exactly where I wanted, so I contacted the estate agency and left my name and phone number. As soon as it is possible we will visit it.

All this let me forget the misery around me, but when the first joy disappeared slowly, I felt again that my life is not normal at all and the empty streets and closed shops confirm this fact. The nightmare continues although I try hard to make the best out of it not to fall into a deep black hole.

Now all countries in the world realize that their health equipment  is far from being enough, masks and other protections at least for the nurses and doctors are missing badly in all countries and let people become creative. Masks are made by companies which normally produce something completely different and a lot of women are sewing masks for the hospitals. Fortunately we have enough space for intensive care in the hospitals, only two university hospitals had a lack of space but outside Brussels there is again space for intensive care. Nurses are missing too, but medical students from the Universities are helping out as volunteers. That's the positive side of this situation there are a lot of very good and generous people ! 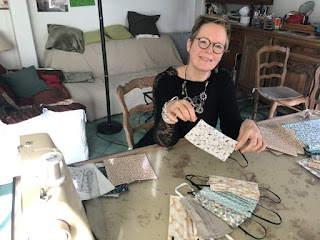 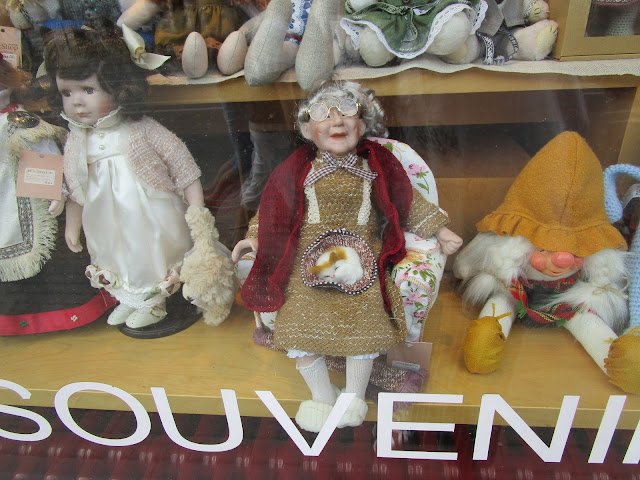 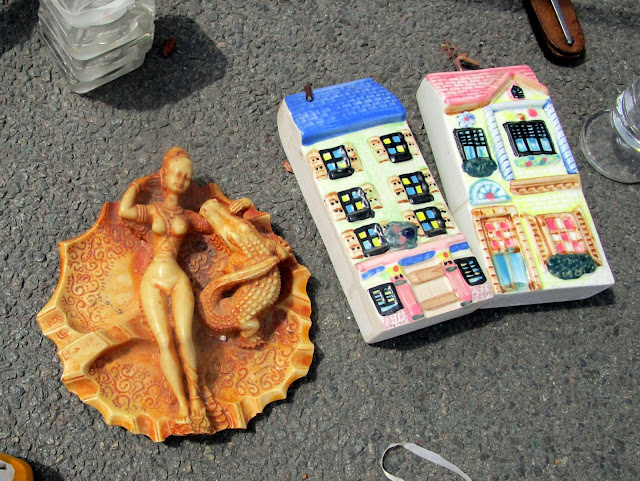 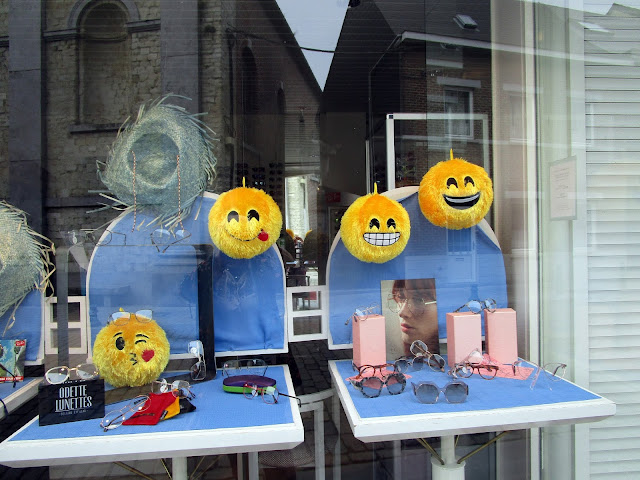 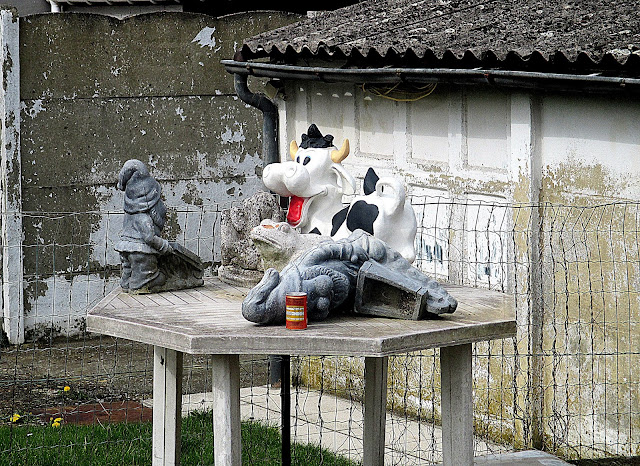 more participants here,
and Image-in-ing
Posted by Gattina at 07:00 17 comments:

Lake Garda isn’t just one of the most beautiful lakes in Italy, boasting picturesque towns, a rich history, and striking beauty; it’s also Italy’s largest lake. Spread across three regions (Lombardy in the west, Veneto in the east and Trentino-Alto Adige in the north)

I think it is the Lake in the whole world I know the best ! Each pebble on beaches the little towns around, because Mr. G. was born and lived in the part of Trentino-Alto  Adige in the north and for 15 years each summer we went there to visit the family. 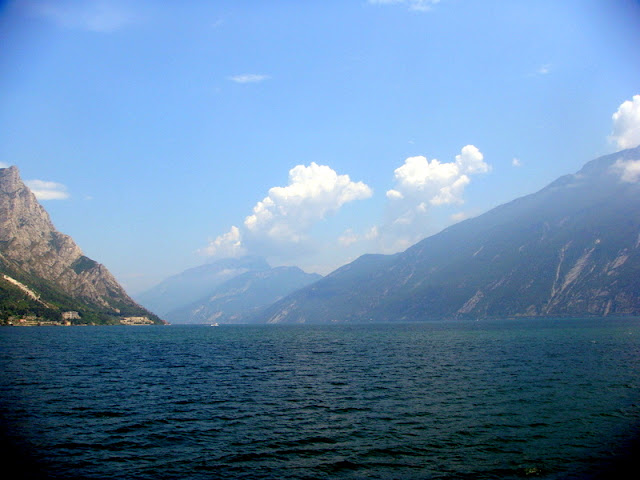 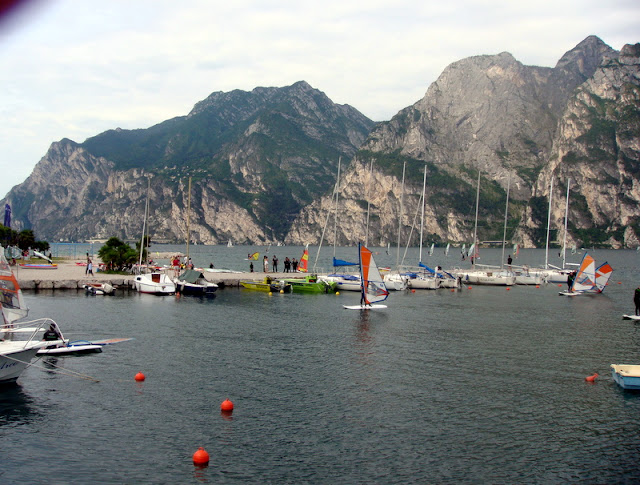 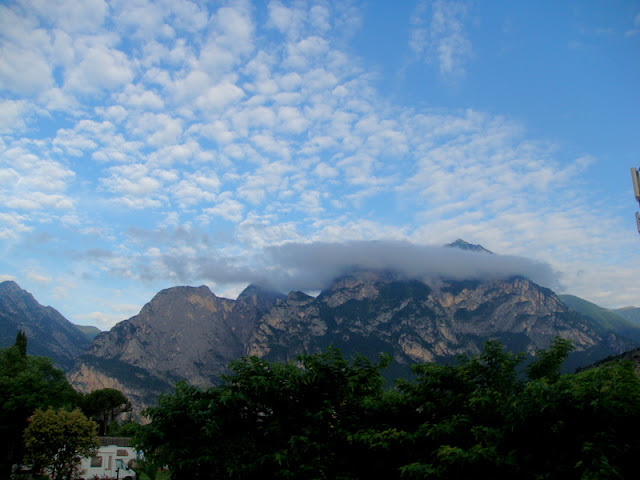 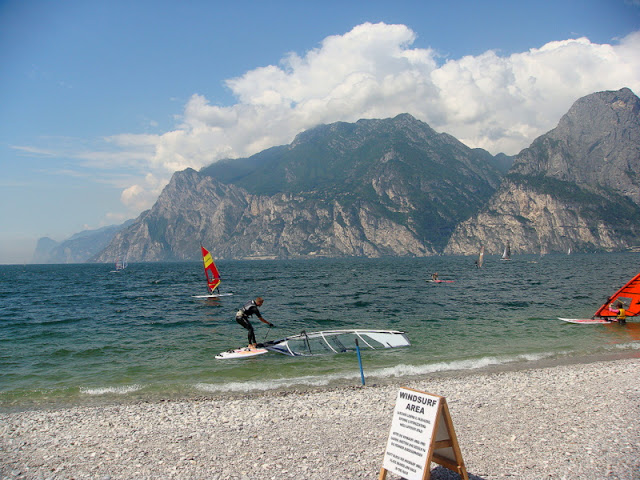 For surfers it's a paradise and also for sailing boats 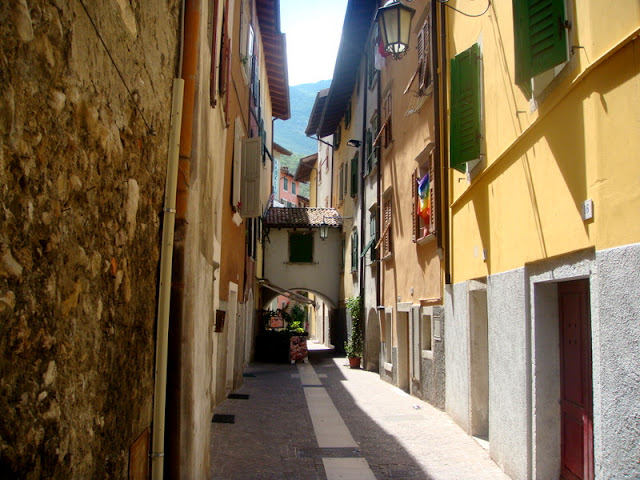 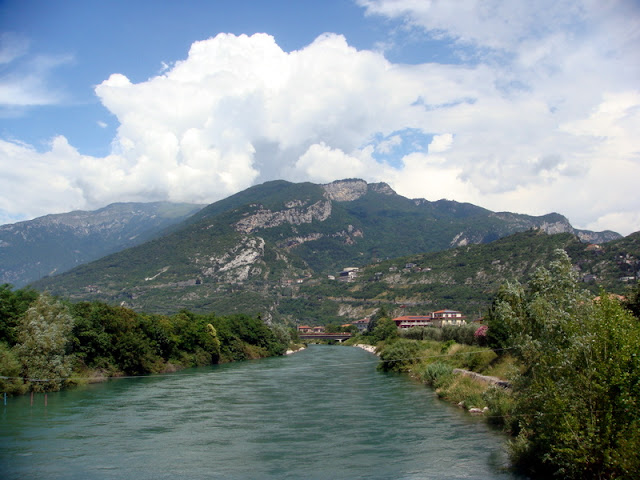 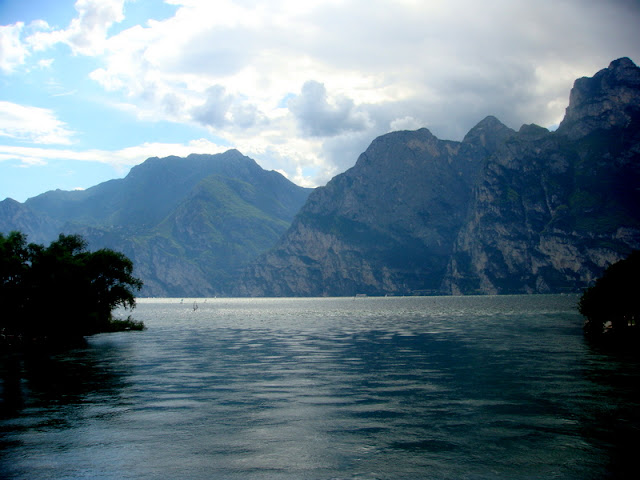 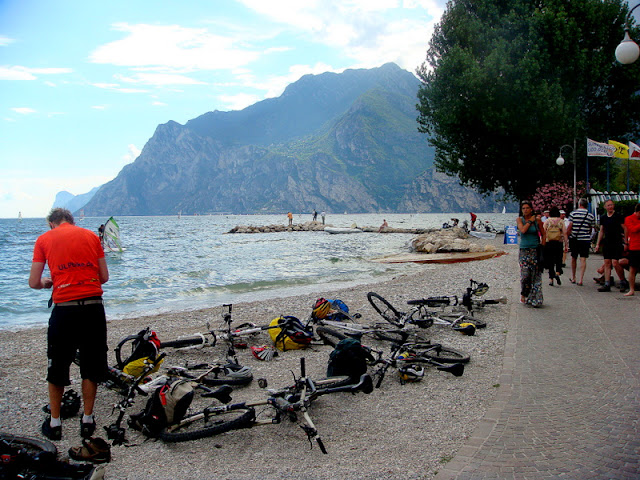 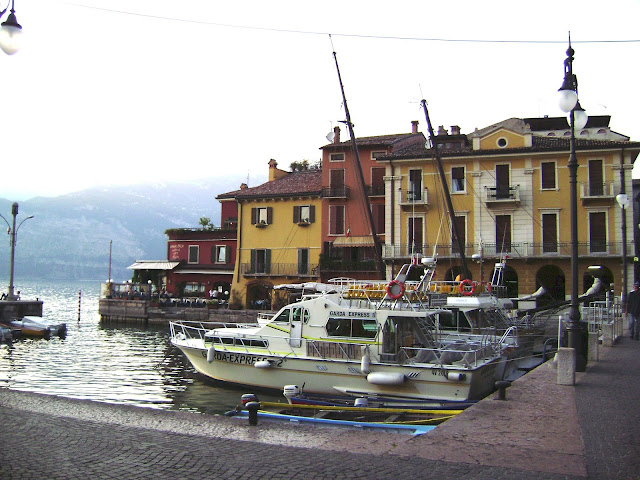 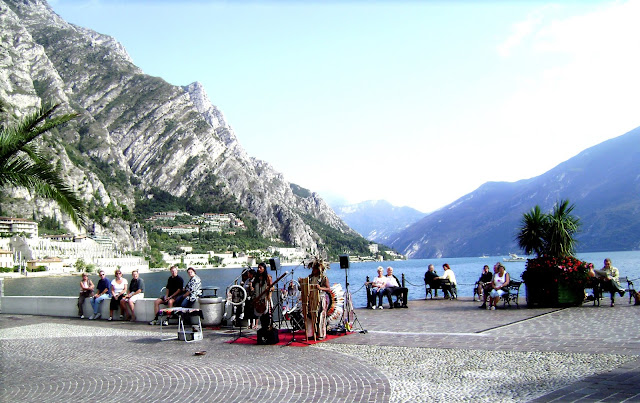 Read more about the Garda Lake in my COUNTRIES & CITIES Blog

Labels: Lake of Garda, Our World 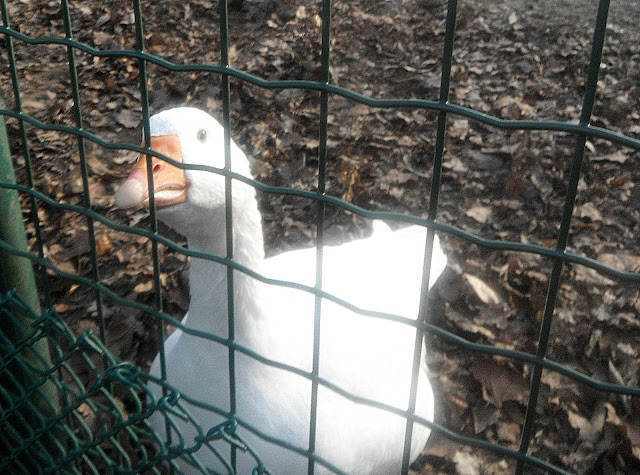 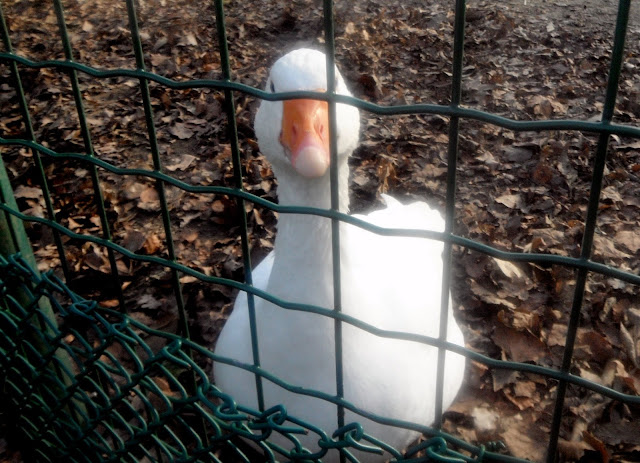 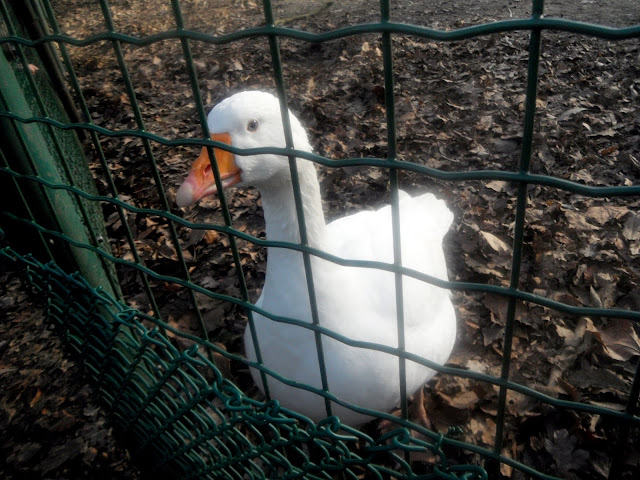 We are still confined in our homes and have to find occupations. Mr. G. plays cards with his computer because his Whist Club is closed. So he spends his time between computer and TV.

But he also does the shopping and went on Saturday morning to Aldi to buy his stuff and my "Mousse au chocolat". Now the older people don't have to line up, they can go straight ahead to the entrance, where they get a humid tissue to clean the caddie bar. He found everything he needed and returned home.

I did almost the same except I didn't go out shopping but I also spend my time between computer and TV. What else should I do ?

Nicole called and asked Myriam and me to come over, because she needed a bit company. We were only too happy to follow the invitation. It was warm and I could even sit only in a T-shirt on the Terrace. But at 5 it became cool and we went inside. 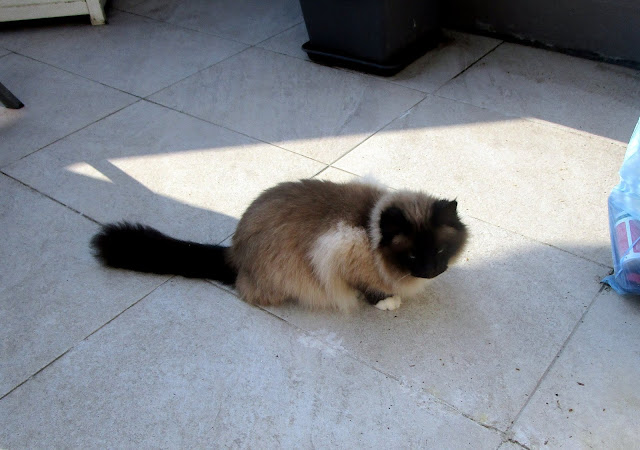 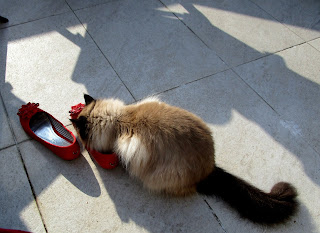 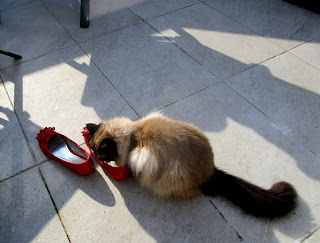 Little Isis kept us company and fell in love with my shoes, she pushed them around and tried to put her head inside.

Sunday was an awful day ! A strong ice cold wind and a grey sky ! The sunny week had disappeared. We also had to change our clocks to summertime and went one hour ahead. I personally don't care, one hour difference I don't even realize.

I woke up at 9 which suited me very well, had a coffee washed my hair and recorded some movies on TV. Meanwhile the phone rang and everybody wanted to know if we had survived another day. I also talked to Grandson Toby who spoke to me from Amsterdam. He still is allowed to play with his little friends on their street, which is only occupied by bikes, even in normal times. My son and DIL are working from home and Toby has some homework via internet.

A group of parents in our city organized a collect of broken laptops or laptops which people don't need anymore, they will repair them and give them to children whose parents have no money to buy a computer.

After lunch I watched TV then prepared my Blogs, took some pictures of cat Rosie and suddenly it was suppertime, after supper again TV time and then to bed.

I think I will be able to copy and paste the same text for next weekend and probably the weekend after too !

There is nothing elso to do then being patient that this Virus leaves the whole world. And patience is not really my cup of tea ! I have to learn ! 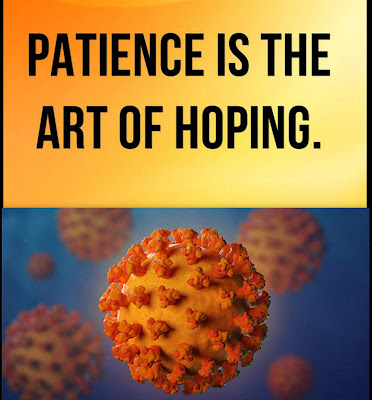