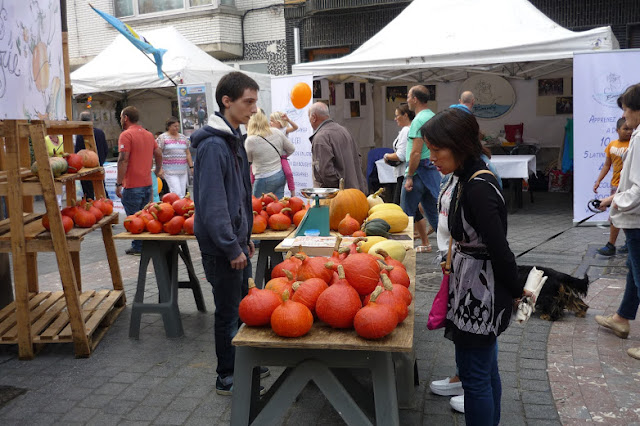 A quantity of pumpkins 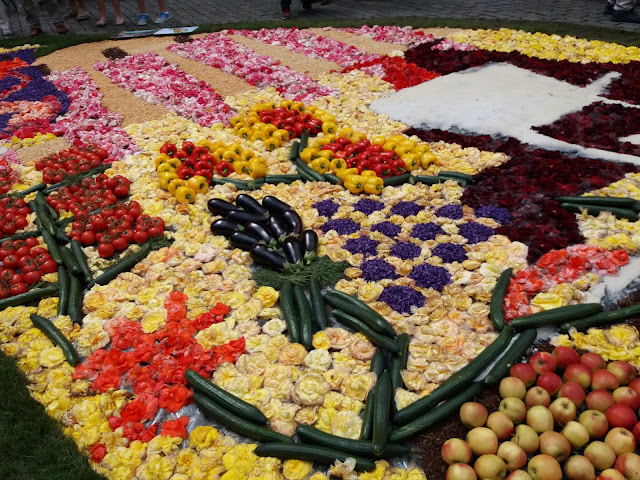 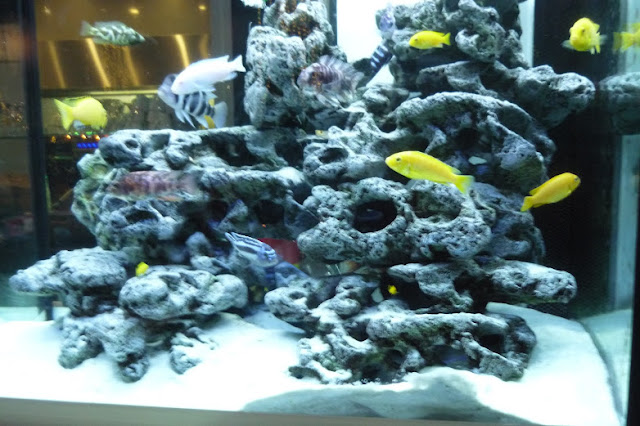 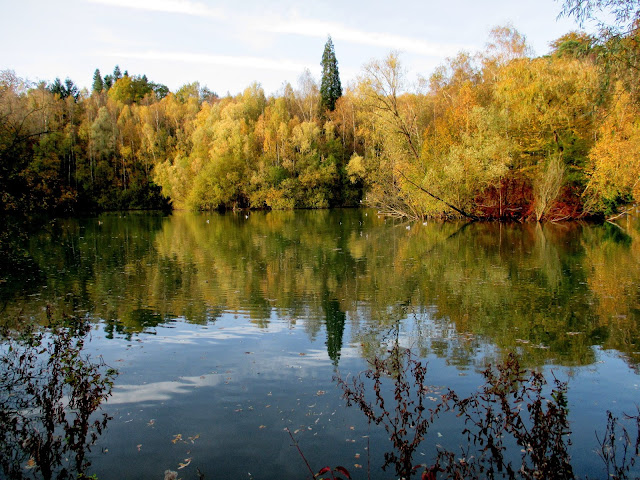 1. Since Monday I am in Amsterdam to keep company to my 7 year old grandson, who has school holidays. So a part from things to do with kids that age I have nothing special to report, the world is still turning.

2.When I arrived I picked him up at his day care school and he was quite happy to see me. At home he opened the door after having deactivated the alarm, and let me in. Then he showed me where to put my things and I got the feeling that he was keeping an eye on me and not the other way around. After a nice meal (Italian, impossible to escape) I went to bed at the same time as Toby, I was tired. 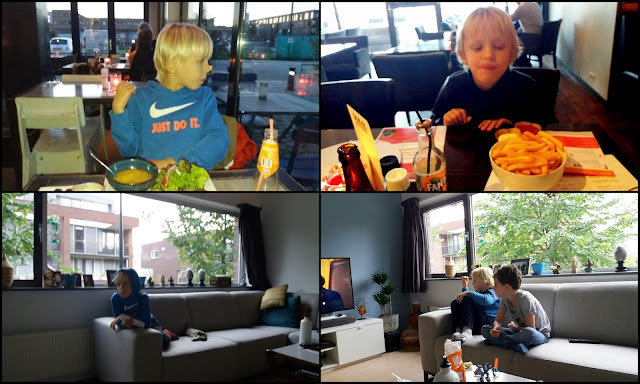 3.The next day I took him to a sports hall where he met a little friend, they played basket and ping pong 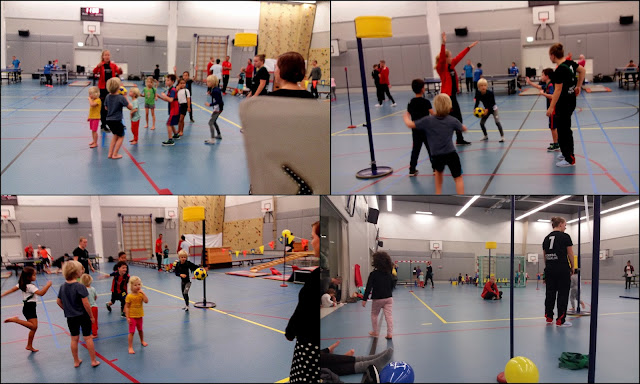 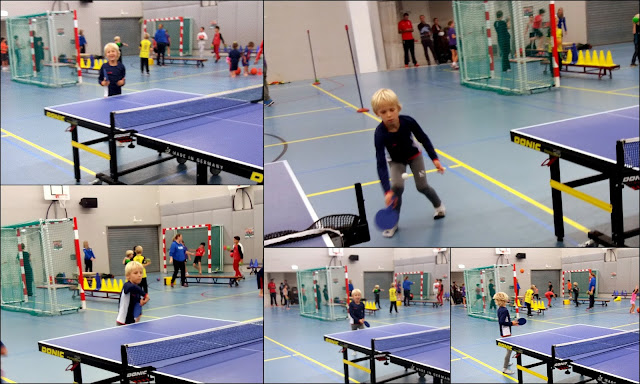 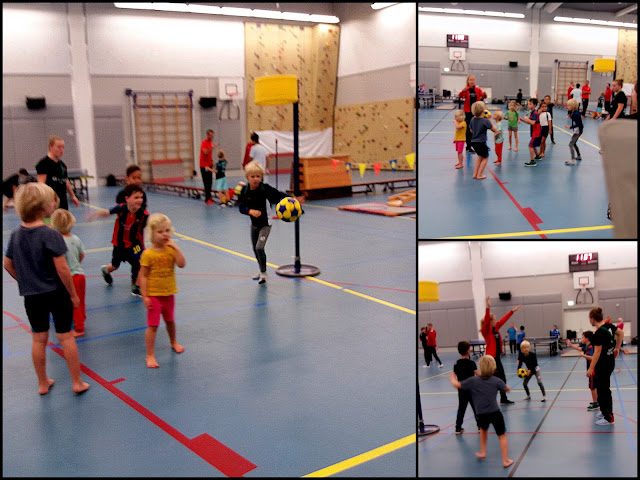 and Toby won the first price, which was a basket ball. He was very proud. Of course as he is so tall it doesn't take him a lot of effort to reach the basket.

4.It was finished at 1 am and we went to a restaurant at the habour to eat a huge portion chips, which was very good. Initially he wanted to take me to the pancake restaurant but it was closed. Again I had the feeling that he took care of me and not me ! When we came home his little friend arrived shortly after and they played the whole afternoon together. I had not much or rather nothing to do.

The next morning the little friend's mother picked them up to go swimming and I was busy with my pictures. Toby in the afternoon was so tired that he shortly fell asleep in front of the TV. That was the only trouble, to get him away from that thing, he probably thought grandmas are supposed to let their grandchildren watch day and night.

5. Nearly the last day we decided to do some art work. Toby is quite talented and has a lot of patience too. 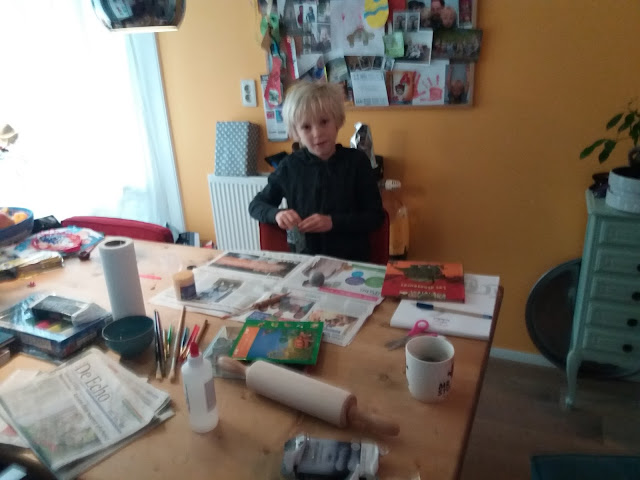 We worked with clay and acrylic 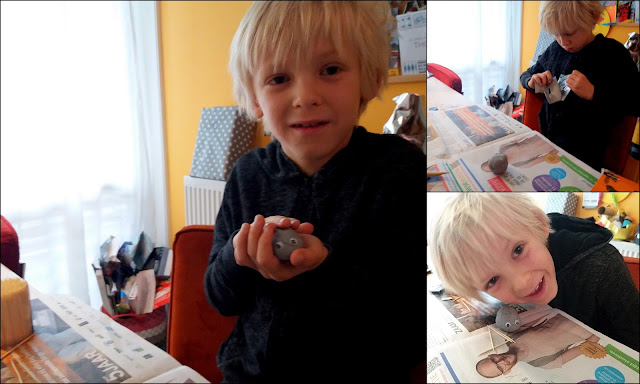 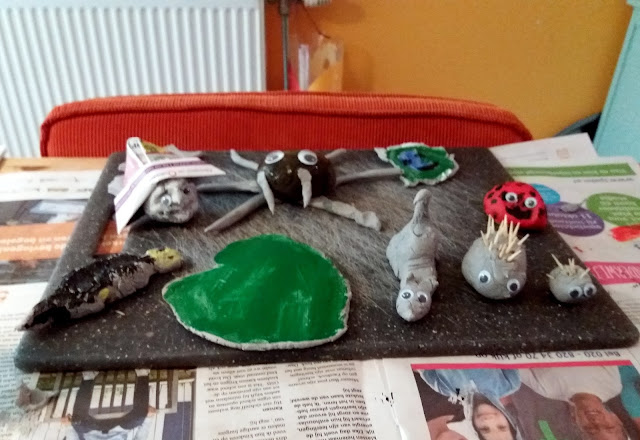 The first item was a little hedgehog, then he continued with a witch, a spider and a mouse. The other things are still unnamed or modern art. 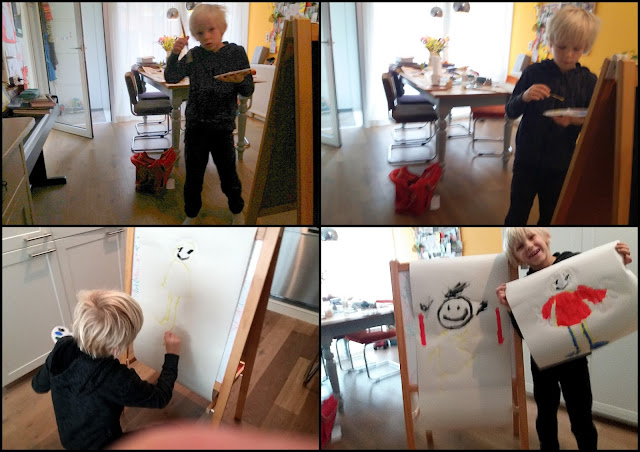 Then he asked me to sit on a chair showed me how to put my legs and my head and then he painted me ! I think he did it very well, at least my red pullover was right. My face a little pale. The head besides was a secret according to him.

After lunch we went to this huge library for all kid's ages. It's so well equipped with tablets, computers, games and thousand of books. I was a bit surprised that a lady in black greeted me, but apparently I was the only one. Completely black in an official place from the city I had never seen in Belgium, the women wear scarfs but not black. 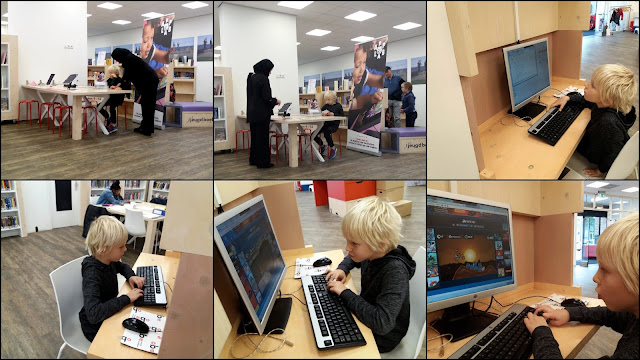 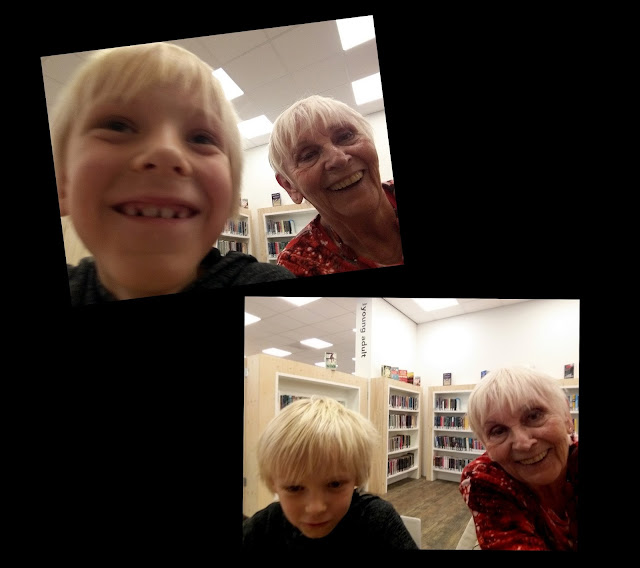 Toby handled the computer or tablet like an old computer scientist, even the lady who was responsible was chased away, Mr. Toby managed everything alone.

And before we went home we made a selfie.

So it had been a very nice week, in fact it was the first time that I was with Toby alone during the whole days. Worked perfectly !

1. What's surprised you most about your life or life in general?
Nothing

2. Sweet potato fries, sweet potato casserole, a baked sweet potato, a bowl of butternut squash soup, a caramel apple or a slice of pumpkin pie...you have to order one thing on this list right now. Which one do you go for?
I hate don't like sweet potatoes or pumpkin pie, the only thing I would order is a slice of apple pie (my cat Arthur too, he ate half of an apple pie during the night, because I had left it on the table !)

3. What's a famous book set in your home state? Have you read it? On a scale of 1-5 (5 is fantastic) how many stars does it rate? To my knowledge everybody reads what he wants in our country (Belgium)

4. There are 60 days until Christmas...have you started your shopping? How do you stay organized for the holidays?
I try to forget Christmas and rather think of Easter

5. October 26th is National Tennessee Day. Have you ever lived or spent any time in Tennessee? Is this a state you'd like to visit one day? The top rated tourist attractions in Tennessee are-

I have seen Elvis's Graceland in 1989 the other things I don't remember, we always preferred the landscapes. I have a card of all States we have seen and traveled through, but I am in Amsterdam and the card in Waterloo

6. Insert your own random thought here.
I rake my brain to invent games to occupy  my 7 year old grandson !

From this side of the pond
Posted by Gattina at 07:00 3 comments:

Tomorrow I am going to Amsterdam to be the body guard of nearly 7 year old grandson Toby.

It is about time that I leave home for a few days because I think it is bewitched or I am. It started Saturday when I switched the coffee machine on and after a while as the water was still cold, I told Mr. G that the machine didn't work anymore. Of course it still worked ! He had seen the button red and had turned it off, as he thought I had forgotten to switch it off ! Without my cup of coffee I am not in a good mood and Mr. G. preferred to disappear in his office.

Then I switched on my computer and found a folder in my photos which I had never seen. The title was "photos".  At least that was logical that photos are in the photo folder. I opened and saw all my photos. I couldn't understand why I had them twice now and deleted the folder.

A few minutes later I got a mail from One Drive"
We noticed that you recently deleted a large number of files from your OneDrive.
When files are deleted they are stored in your OneDrive recycle bin, and can be restored for 30 days. After 30 days, deleted files are gone forever.

So I put them back again although I don't know for what use. As long as it is free of charge it's OK.

This problem solved, my computer suddenly started to speak. He told me everything what I have to do "shift", ctrl, and so on. I continued typing but this female voice got on my nerves and I really still not understood why suddenly my computer talked, I suppose there is a function for maybe blind people ? I did a restart and the voice disappeared. Sigh.

At supper time I wanted to make scrambeled eggs with a lot of vegetables, the light went on and then disappeared. My oven was dead ! While I pushed on all buttons, Mr. G checked the fuses in the basement. I tried to follow the cable which connected the oven to the plug and noticed that it was loose ! I gave a hit with my fist and the oven worked again ! Probably my cleaning lady had cleaned too well.

After supper I thought that now my miseries would end and the ghost would go back in his ghost world, when suddenly the phone rang. It was Ilona she asked me what I wanted ??? I hadn't called her since yesterday and I didn't want anything. Now who called her ?? It wasn't me because my phone was far from my hands. It couldn't be a cat as the phone is in a case. It will remain a misery.

So I am happy to leave tomorrow for Amsterdam 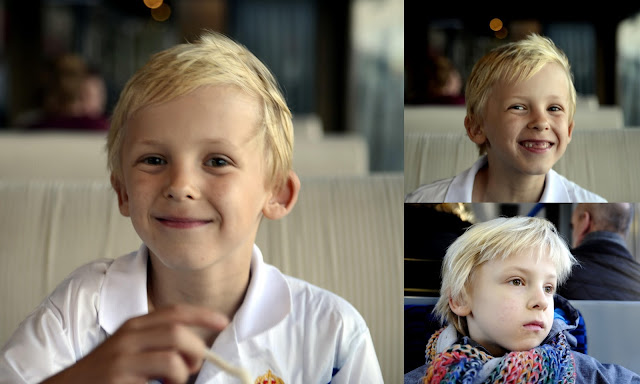 to keep an eye on this little man. I think we will have a lot of fun together as he loves also to paint and create things. I bought modelling clay to make little animals or other things 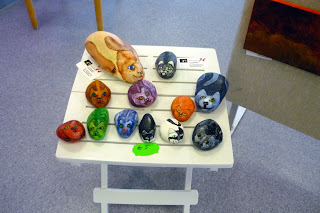 and have pebbles to transform into cats or dogs. So if the weather is bad we have a lot to do. 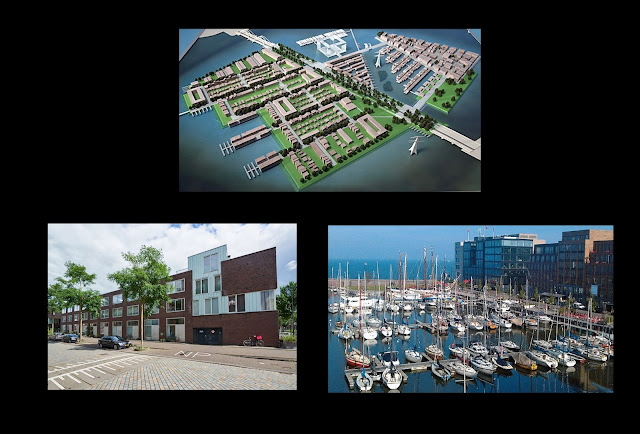 It is a very modern part on the outskirts of Amsterdam, only existing since 2002 I will certainly go back to this nice restaurant at the port to eat a good pancake with cheese and ham !

I will certainly be short in comments !