Yesterday we finally had a nice day without rain and in the afternoon the sun came out ! 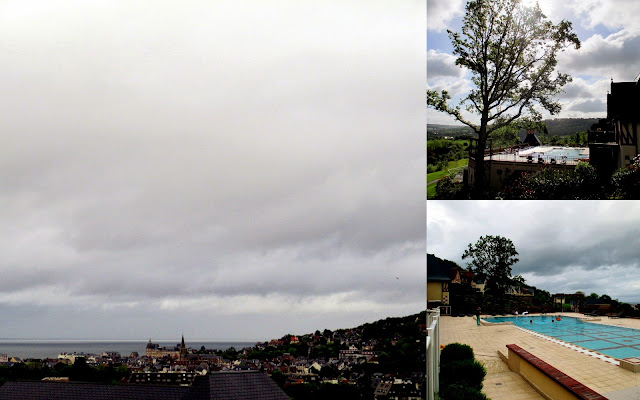 Despite the rather cool temperatures Nicole went swimming in the heated pool, where other courageous were swimming too ! I didn't inspire me at all ! 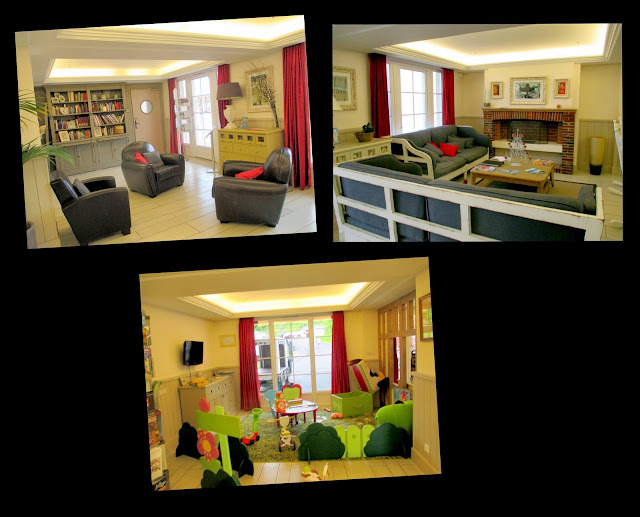 Instead I made a little tour through the reception hall which I hadn't really noticed when we arrived, and discovered even a little space for kids. 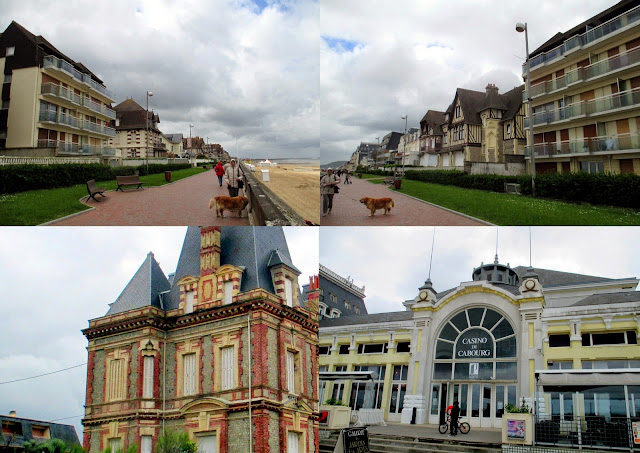 In the afternoon we went to Cabourg the next little town, which is very beautiful. We did a long walk along the beach admired the architecture of the houses. 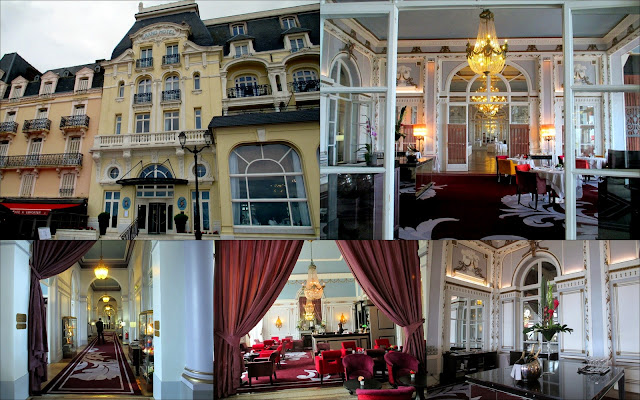 I entered the "Grand Hotel" and have to say it was really grand ! 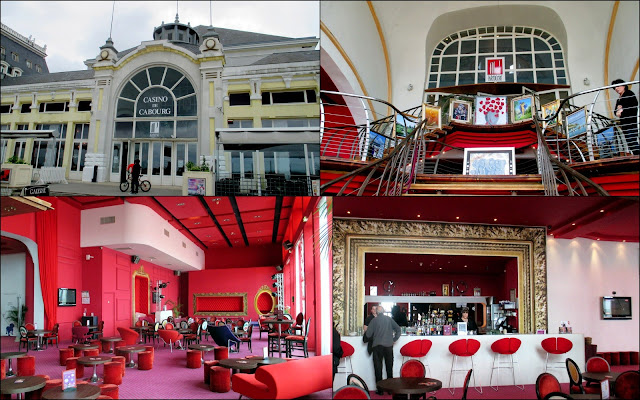 I had noticed that each town has its own Casino.This was the one of Cabourg. Of course I only could see the entrance and the restaurant, not the games. 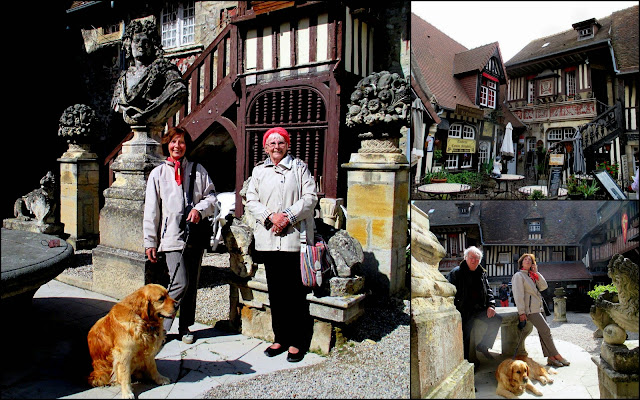 We returned to Dives sur mer  to the place where William the conqueror launched the Norman conquest of England in 1066. We met the responsible of the site who was very pleased to explain to us the whole history. I think he was a little offended when Nicole told him that it is a shame that the buildings are so neglected and I added that on the other side in England it was not at all the case.

After a nice drink we returned home, and went to the same restaurant we had been on our first day, and I  ate mussels with chips, which was excellent.

We will leave on Monday and return home. I don't think that I ever will come back here, the weather is just too bad  and with its neglected patrimony it's rather depressive. I prefer by far England on the other side of the channel !

As I have written every day since I am in Normandy, my Friday's Fave Five are in the posts below !

Unfortunately today it was raining the whole day ! It didn't clear up a bit. We spent the morning home it was cold outside.

Charlie now when I wake up comes at my bedside and greats me by waving his tail, as if he hadn't seen me for ages. Then he watches my Yoga exercises wondering probably about my strange behavior !

After lunch, rain or not we decided to drive through little villages on the "Cider Road". 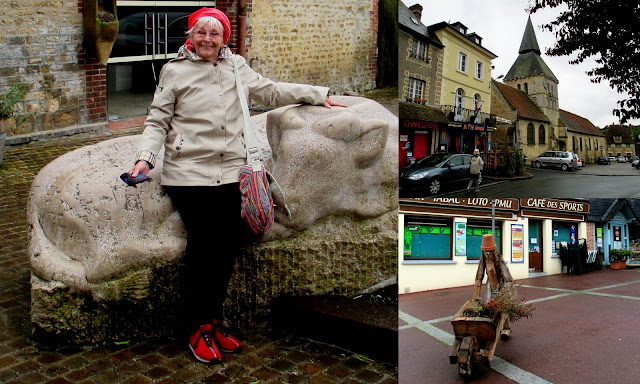 The Cider road maybe nice in summer or at least when the sun shines, but here we drove through woods and wet fields on narrow streets and saw strictly nothing. Finally we arrived in a village which had the animation of a cemetary ! Not one single soul in sight, not even one cat or a dog. The three shops we saw were closed, the church too and there was nothing at all in the house where a pottery exhibition should have been. There was only an empty room. At least the bull statue offered me a place to sit ! We returned to the car and stopped in  Cabourg a historical place, where the battles were prepared against England in 1000 something. . 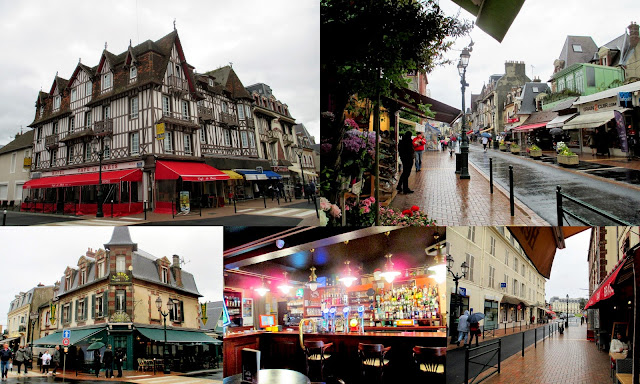 Today was a holiday in France, they celebrated the end of WWII. I think it is the only country in Europe who still celebrates the end of WWII with a day off. Therefore there was a fancy fair in Cabourg and the town was packed with people. It had stopped raining and we walked along the main street. Just when it started raining again, we were sitting on the heated terrace of an Irish Pub and watched the people all in raincoats with umbrellas. The street emptied in no time and we waited there that the rain stopped. The houses and the whole city seemed to be very nice and there were lots of shops which were all open.

We decided to come back here on another day when it wouldn't rain (hopefully) and really visit the town.
Wet like cats and feeling cold we returned home and spent the rest of the day in our warm cosy appartment.  Even Charlie whom we hadn't taken with us because of the heavy rain, only went out reluctantly for his business. Fortunately he found a girlfriend and played a little but then he barked so that we opened the door for him. Now he is exhausted from sleeping the whole day ! I think he must have been a cat in his former life !

I have to skip the letter Y, because I continue my holiday diary. Holidays are tiring especially when the weather is bad and you have to look for adequate occupations instead of laying lazily at the swimming pool and let the sun shine on your belly.

When we opened the curtains this morning it was raining cats and dogs !  Even Charlie hesitated to go out and water the plants. 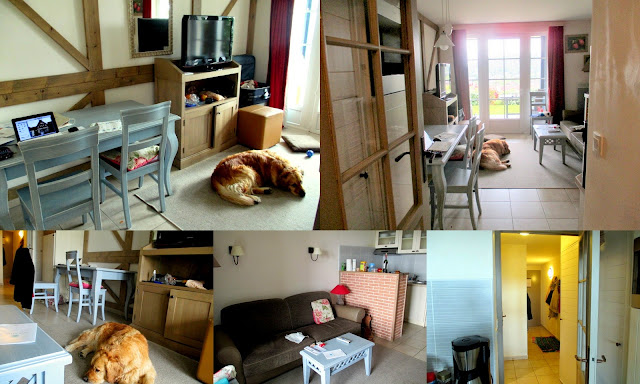 I took some pictures of our apartment. The living room with the kitchen and the hallway leading to the bedroom and bathroom. 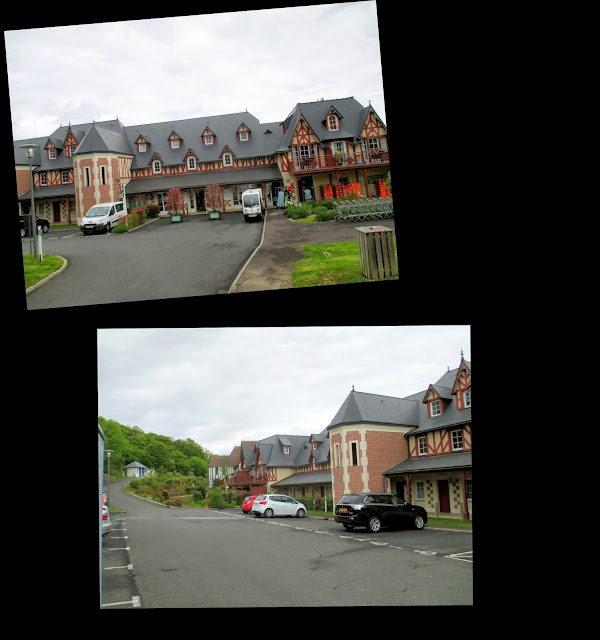 Fortunately around 11 it cleared up and after lunch we decided to see the most famous little towns around. Before we went off I took pictures of the building in which we spend our holidays. 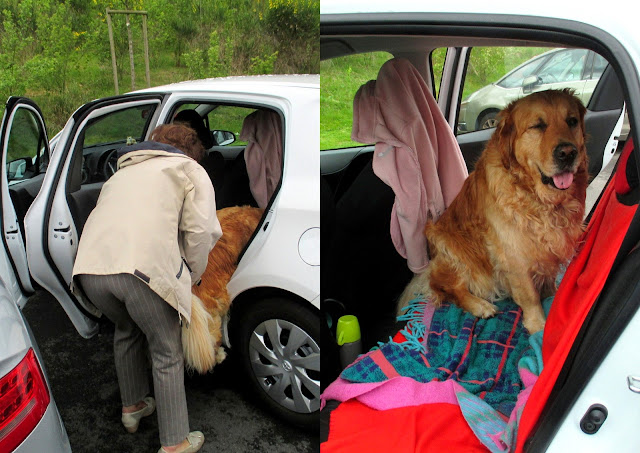 Poor Charlie has difficulties to get in my car, he slips and  Nicole has to lift him with his tail. But then he is happily installed. 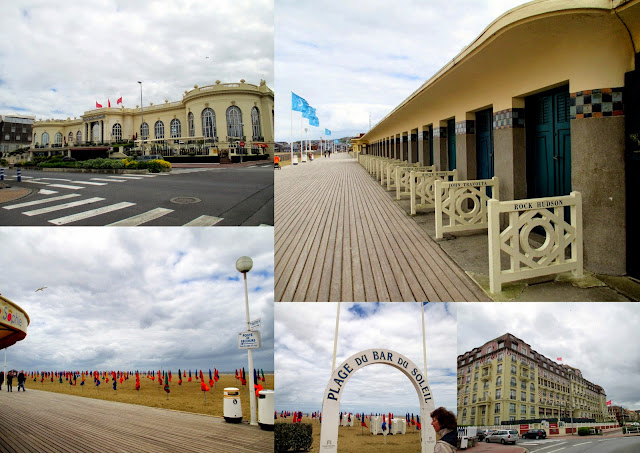 First we went to Deauville the "queen of the Norman beaches" and one of the most prestigious seaside resorts in all of France. It is also famous for its film festivals and on the Promenade des Planches, which  refers to the famous wooded boardwalk that parallels the seaside are cabins all the long with the names of famous actors who all had once been in Deauville. We were rather disappointed,at this time of the year it looked boring and empty, and I didn't find the Casino or the hotels very special. But at least we can now say that we had been to Deauville ! 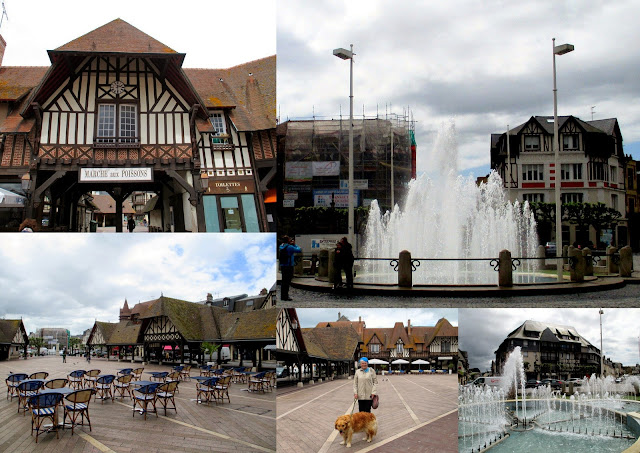 We drove a little further to Trouville a village of fishermen. The name is rather funny because it means "Hole town". We didn't find holes but beautiful houses a huge Fisher market and a nice place with restaurants all around and a fountain in the middle. 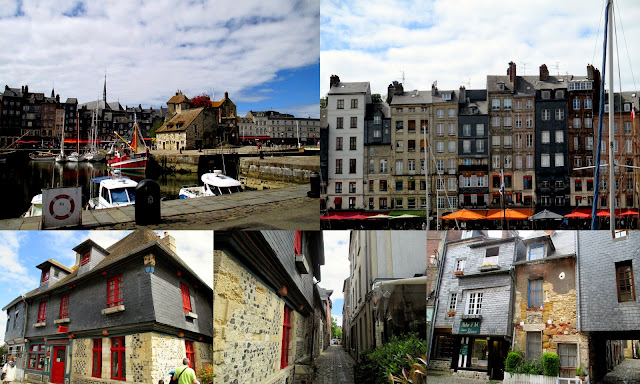 When we had seen enough we went to Honfleur. It is especially known for its old, beautiful picturesque port, characterized by its houses with slate-covered frontages,  painted many times by artists. A real beautiful old little town. I had to drive through such narrow streets like the one in the middle (above in the picture) my rear view mirrors touching almost the walls on both sides. Fortunately I was used to such small streets from when we were in Italy.

We had drink at the little harbor, the sun had come out and it also was warmer. Then we drove back through woods and little streets, in the mountains and along the sea. I got stuck twice because I met a huge farmer's tractor, who was friendly enough to leave me some space !

After a little rest at home, we returned to Houlgate's city center, I needed some petrol and landed in a restaurant which had the worst mussels I have ever eaten in my whole life ! 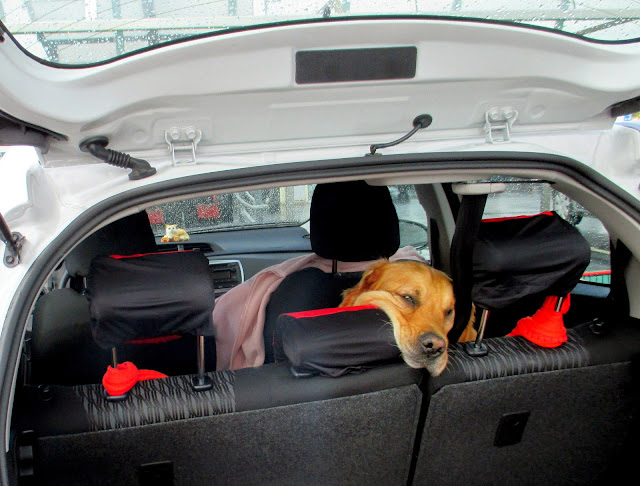 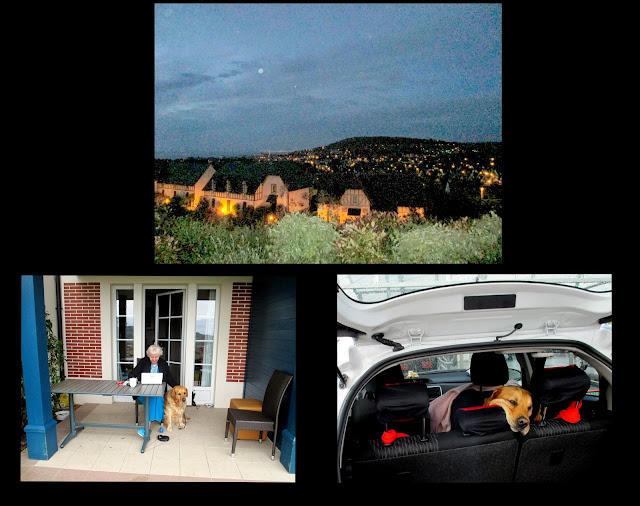 Yesterday evening when we returned from the restaurant, we had this beautiful view on the city, it looked almost like a Christmas decoration.

When I am writing my posts, Charlie is my supporter ! He comes everywhere with us and above in the picture, he was a little fed up of shopping.

Unfortunately it rained the whole day, but nevertheless we went out to explore Houlgate. It is a very pretty old little town. 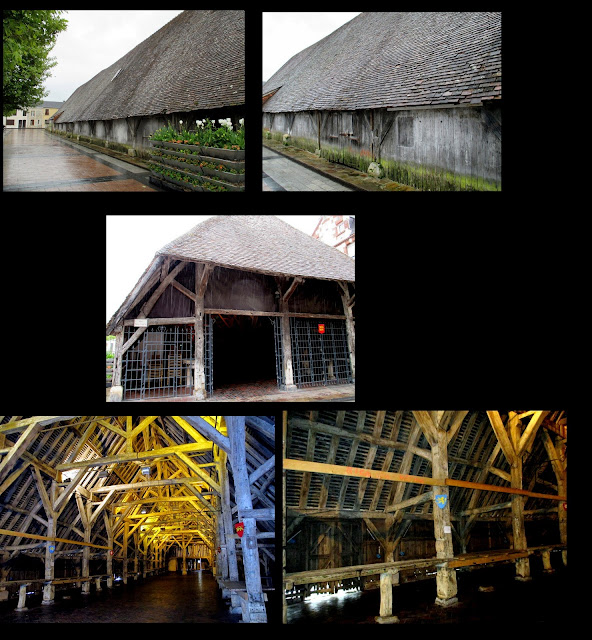 We visited the very old market hall which dates from 1030 if I am not wrong, at least that was written on the different explanations which mentioned the battle of Hastings (UK) . I never thought that wood would last that long ! It was very impressive and huge. 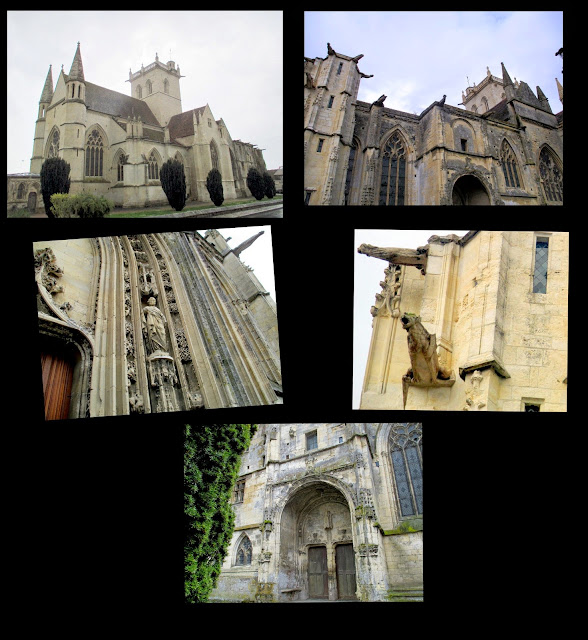 Then we went to the "Old Church" which would have been very interesting to visit, but it was so damaged and neglected, the windows broken, the statues had lost their noses, it was a real pity to see. It was not allowed to see the church from inside, it was too dangerous. 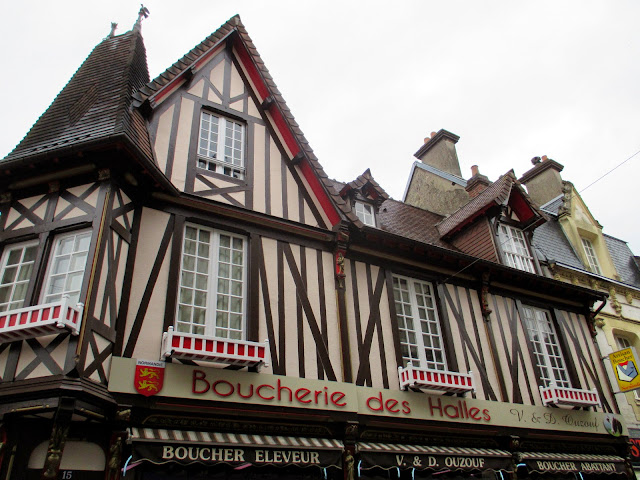 Everywhere in the town center were half timbered houses, very picturesque !

In the evening it still rained a little but we wanted to go out and went to a very cute restaurant specialized in crêpe ! I had one with cheese and an egg, and Nicole's was filled with vegetables. They were very good. Hopefully the rain will stop for tomorrow !
Posted by Gattina at 06:30 6 comments:

We left home at 9 am and had our first stop after two hours. In Belgium the highways are free, but not in France, so I had set my GPS on toll free roads. 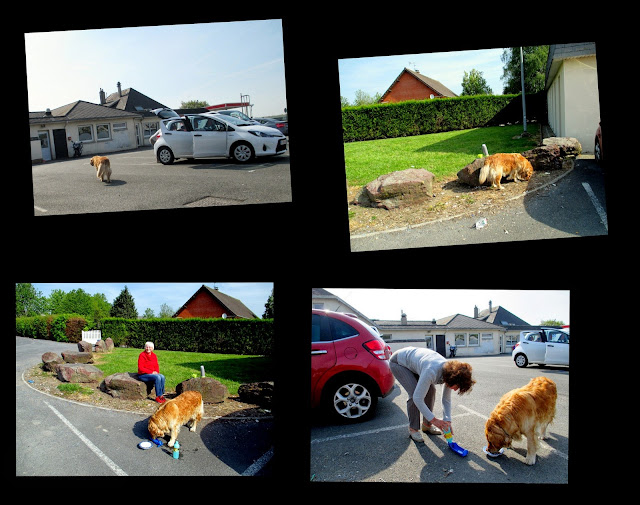 I had a coffee and Charlie water and some dry food, stretched our legs and then continued driving through beautiful landscapes on large roads with nearly no traffic at all. While the highways were probably full ! 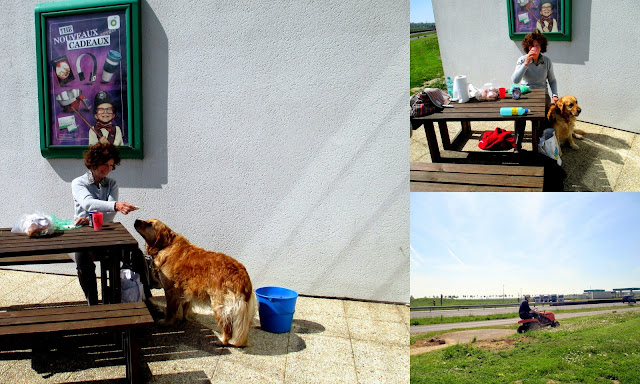 We even found a nice little picnic place and ate our sandwiches.

At 4 pm we already had arrived in Houlgate. (see post below) The apartments are on a hill with a wonderful view on the sea and the little town. 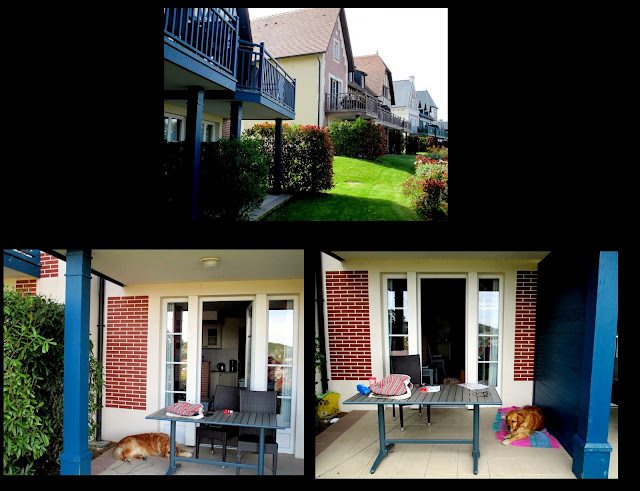 We checked in and were very satisfied with our apartment. It has everything we needed. Charlie felt home immediately. He choose his place on the terrace and we could sleep without problem the French doors open, nobody would dare to come in !

The views are so beautiful ! 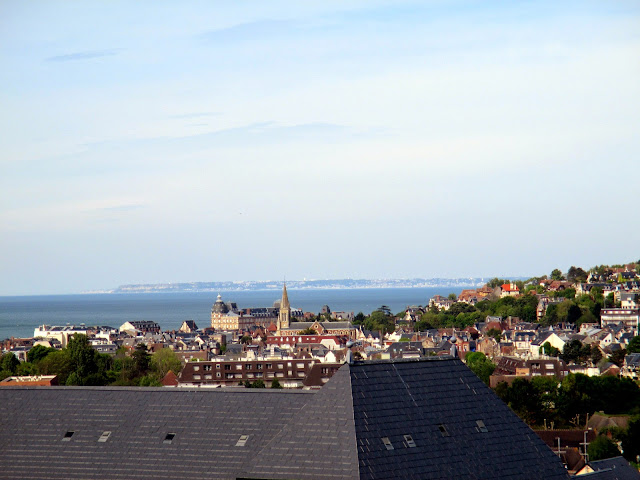 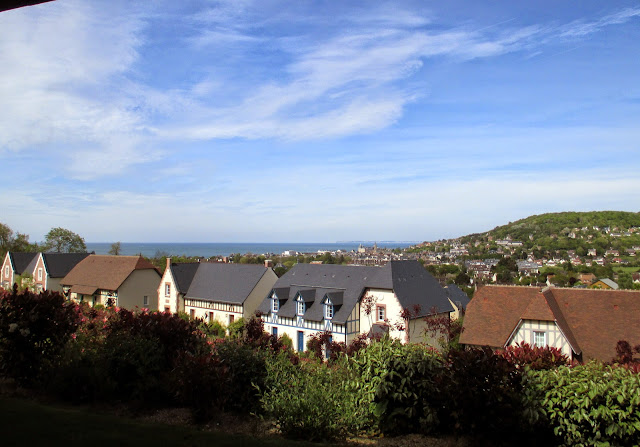 These pictures I have taken from our terrace 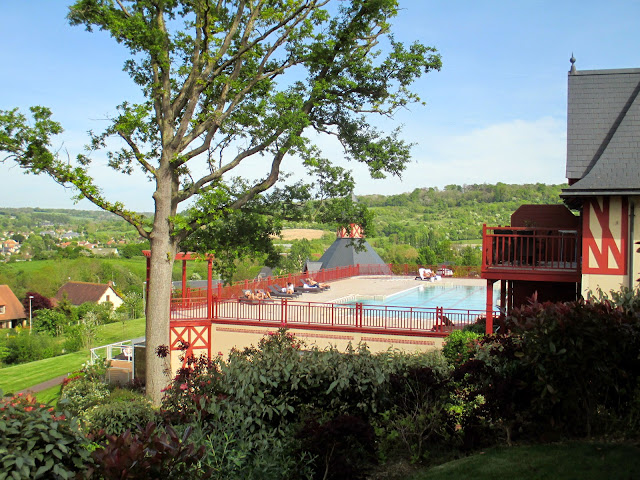 There is also a heated swimming pool.

We were quite tired but we also were hungry, so we drove downtown and took the first restaurant fortunately we were lucky,  we had an excellent supper.

MY WEEKEND OF MAY 3

The warm spring temperatures had suddenly dropped to freezing point, and I even had to put the heating on ! The sun is shining but it's cold !

I spent the weekend with preparing my travel computer and put things in I would need.
In the afternoon I went with my empty suitcase to Nicole to see how both of our suitcases would fit in my trunk. It was perfect and lots of room left ! We discussed what clothing we had to take along, as the weather doesn't seem very warm. And while you read this, I will be driving 450 km (280 miles) to France, to Houlgate in Normandy, just in front of the English South East coast.  This little town had been an important place for the allies in WWII. If there were not the channel, I just could drive over to Torquay or Plymouth !

Nicole's dog Charlie, a Golden Retriever is coming with us and will take the whole space of the back seat. We have rented an apartment for this week.  Nicole and I have been already together on holidays in Tunisia and Egypt, and now we want to discover Normandy which we don't know at all. Charlie will be our body guard and force us to do a lot of walks !

I will write a post every day what we will see and how we are spending our days.
Posted by Gattina at 07:18 11 comments: