And of course there also is


In our house everything runs with electricity, except myself and the cats. So If there is a breakdown, nothing works anymore. This happened one day this week.

I was reading Blogs early morning, when suddenly the screen turned black with a little "click" sound. I called Mr. G, who hurried like a snail (mornings are hard) to the basement to check if it was our main fuse or a general breakdown in the whole street.

The fuse was OK and so he called our Electricity supplier with his mobile as the normal telephone didn't work, of course. I wonder how we did before when that happened.

They told him it would be fixed at the latest at 11 am. It was 9. I thought I just reorganize my day and instead of blogging I would cooking for the evening.

Armed with a flashlight, I went to the basement to pick up cans of chili beans and a jar of Chili sauce. I opened the cans and the jar and the freshly minced meat, put a pan on the electric stove and turned it on.

Of course it didn't work, I had forgotten that I was cooking instead of blogging, because we had no electricity !

Now all the stuff was sitting there and suddenly I realized that I had run out of oil. No problem I thought, I will call Mr. G. who was taking his coffee with friends in the city.

I looked for my mobile, but it wasn't on the kitchen table, it wasn't in my room either, I couldn't use the phone and call to find it, because the phone didn't work. I got more and more furious about myself and decided to check room by room from top to bottom because with me you never know. I looked under the beds, and wardrobes, in the bath tube and in the fridge, and with the flashlight I went again to the basement and checked all corners.

I went up again and started to think logical, which doesn't happen so often. Where had I been in the last 30 min ? Like Colombo, Sherlock and Miss Marple together, I was following the traces of my misteriously disappeared mobile.

Suddenly all lights went on, after only an hour. Relieved I took the phone and called my mobile number. It rang just besides me in the kitchen. I followed the sound and found it in my purse, the only place where I hadn't looked.

I called Mr. G. for the oil. I told him to buy any oil but NO olive oil.

He came back with a 1 liter bottle of Olive oil.

Fortunately the Chili beans even with Olive oil were good !

please leave your link below if you are participating and have fun with us.

1. This week we had wonderful weather, always sunshine and around 30°C (86 F) which is rather seldom for Belgium. So I did what a lot of people do when it's hot, they rush to the seaside to get some fresh breath. 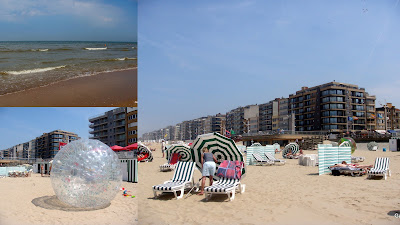 The school holidays hadn't started yet, so the beaches were quiet empty. Today it will probably be impossible to even get a place to stand up, which is only a little exaggerated.
We had a wonderful day, but the water was too cold for swimming.

2. Since last October I didn't go in my Fitness Club anymore, I wasn't happy with the aquagym and in general fed up. So I had been looking for something else and a friend took me with her 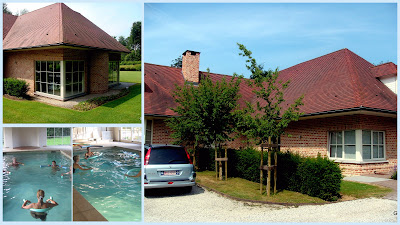 to her Aquagym place and I had a free trial lesson. Not only the place is wonderful, a beautiful house with a very big garden and a big swimming pool with the view on it. The "teacher" is a very nice young woman, so I was happy to agree for a start in September after the school holidays. 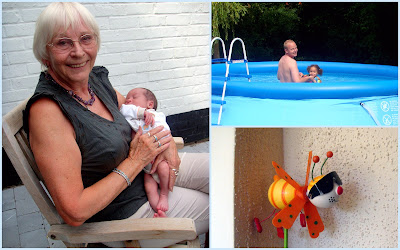 3. Yesterday I went to my son's best friend to see his new born little son. When I arrived he cried like 10 cats together, but once in my arms he fell asleep. His mum called him a traitor !
While we were chatting Baby stuff and other female subjects between women, daddy played with the 4 year old sister in the swimming pool. 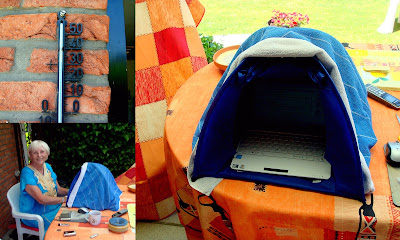 4. In order not to be locked inside for once that the weather is nice, I created a little office on the patio. Against the bright light I invented a screen, using the tent of cat Arthur. It works very well.

I also had to go to the doctor for a prescription of antibiotics, because I have an ulceration (?) on my upper gum and that hurts, I tell you ! I have the impression to look like a pug !
Posted by Gattina at 06:00 7 comments: 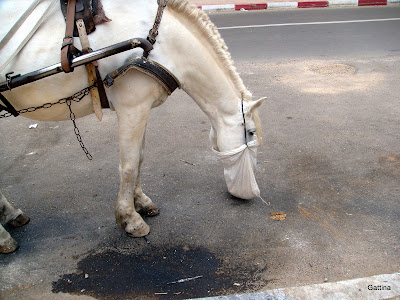 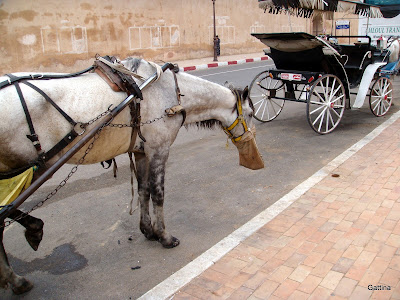 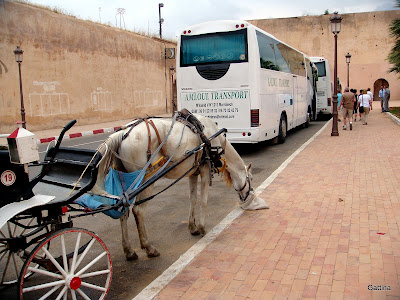 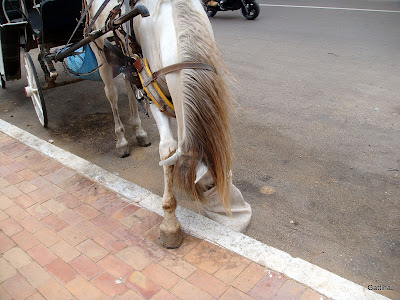 Fast food in Morocco
Posted by Gattina at 06:00 9 comments:

Since 2008 I have participated in Fun Monday each week. Now it seems it has died. 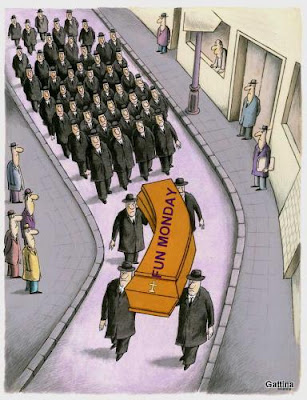 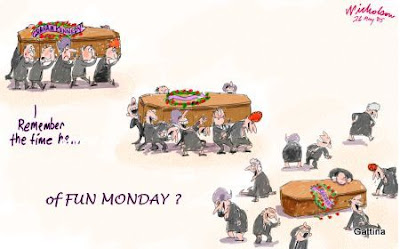 It was a very nice meme and I really enjoyed in participating, but lately it became hard and harder to find a host for the next Monday. 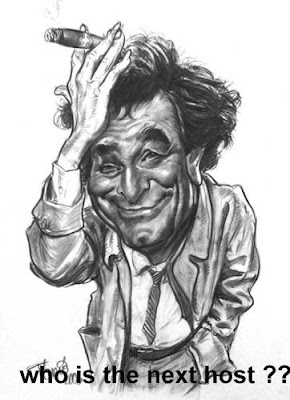 Each Monday post a picture which is completely crazy, messed up, with nothing on etc, which normally you would immediately delete. It can be everything, like only shoes instead of the whole person, a blurred building or whatever you want. Then tell us the little story how it happened and what it should have been.

I created this little logo 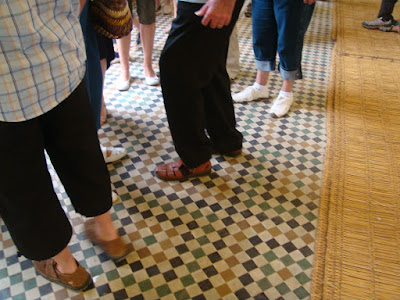 Like here. I wanted to do a close up of the beautiful mosaic tiles and apparently pushed on the button when I bent down. All I got were the legs and shoes of my travel group.

Next week I put a link thing here and hope that there will be a lot of participants ! It's always good to laugh on a monday.
Posted by Gattina at 06:00 10 comments: