1. I think our weatherman drinks too much wine ! Since the beginning of the week, he is always wrong. On Monday it should have been very hot and sunny the whole day (even the hottest day of the year) instead it rained, it was windy and rather cold and I had to do my shopping with a raincoat ! I stayed for a little while with Dominique to keep her company and also fill in her freezer.

2. With these weather changes from Northpole temperatures to desert heat, I started feeling unwell again and my bronchitis came back ! My mood sank under the level zero !  As I also had fever again, Mr. G. called our doctor and I told him that now it is enough that's the 3rd time this year, that it happens to me. Apparently it is a kind of virus and difficult to kill, but this time he said he will use stronger weapons, not quiet an atomic bomb but nearly. Now I have to do 3 times inhalations with the help of a mask and a pump. 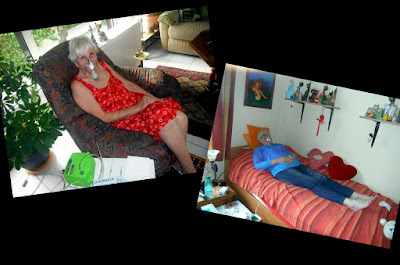 Which makes me look like Frankenstein's daughter and my cats ran all away. First I tried it sitting in a chair but laying on the bed works better. So I do some Yoga exercises to breath as deep as I can. This operation lasts 20 min and is hard because I hate to lay still.

3. Feeling better I thought some aqua gym would be good for me I only had to pay attention not to catch a cold It was very nice and while we were "working" in the water it rained cats and dogs outside, despite the fact that the weatherman had again announced beautiful weather ! After a nice cup of tea and some chats, I returned home, but stopped to buy me something to comfort myself, but as usual if you look for something you don't find it.

4. Our roller coaster weather continues and the crazy weatherman had announced thunderstorms during the night, rain the whole day and cool temperatures. 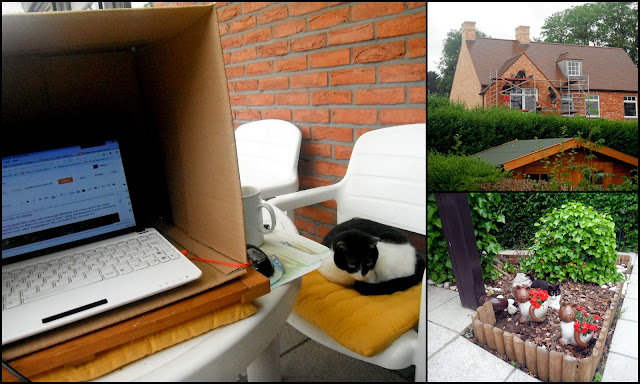 The reality looked different, fortunately ! It was so hot that you could hardly breath and although I had installed my "office" on the terrace I had the impression to work in an oven. My little secretary watched me from time to time, opening her eyes was too tiring, sometimes she moved and slept on the bark.

The house behind our garden which is still not ready since 4 years had suddenly some workers there to work on the bricks, but not for long and then they disappeared again. It must be something not very clean, as long as a house is not finished you don't have to pay taxes. And after 5 years you can sell it with a big benefit ! It will make exactly 5 years next year and I bet it will be finished by then and sold !

5. For the first time since weeks I went to my painting course again. Or I had been sick or I was on holidays ! It was nice to see the whole group again and we had a lot to catch up on what had happened during my absence !

The afternoon I spent on the terrace and waited for the announced thunderstorm and rain and cool temperatures, instead the sun was shining and I even could let "Oscar" the robot mow the lawn.

I think our weathermen should rather look out of the window and not on their instruments ! The whole week they were wrong !!
Posted by Gattina at 06:00 13 comments:

EDINBURGH AND MEN IN KILTS

When we approached Edinburgh on our tour around the UK we wondered how many men we would see with a kilt instead of trousers. 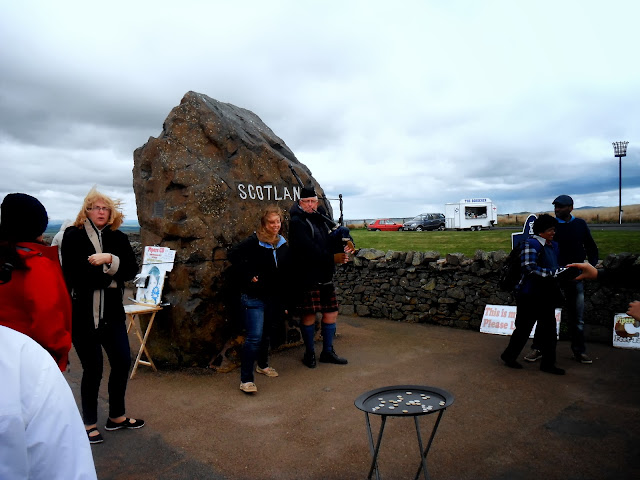 The first one we saw was for tourists on a border which should "separate" Scotland from England. Of course as a real Scot he asked for money to take a picture.

When the bus stopped our guide did a walk with us through Edinburgh city center and to the castle.
It was really very beautiful, but we didn't see one man in a kilt ! Ilona  had dreamed of Scots all looking like Sean Connery and we were rather disappointed. They all looked more or less  normal  like men everywhere !

The walk through Edinburgh had shown us a little of the town, but we wanted to see more. What is the best to do when you want to visit a city you don't know ? It's taking a sightseeing bus !

And that's what we did. 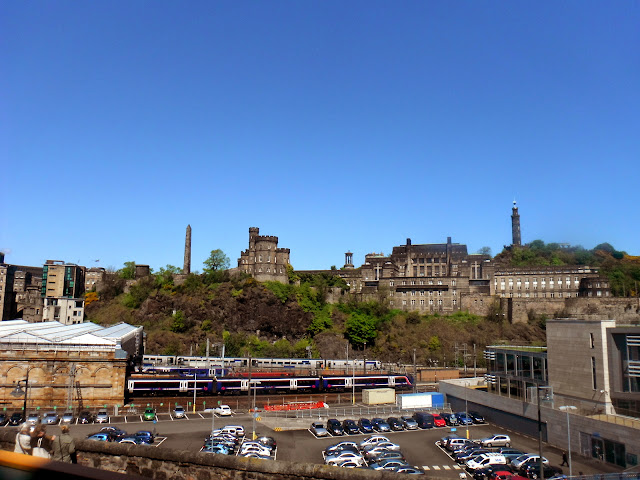 We had a nice overview of Edinburgh, lots of explanations, which unfortunately I have already forgotten and should look it up again the day I write about Edinburgh. 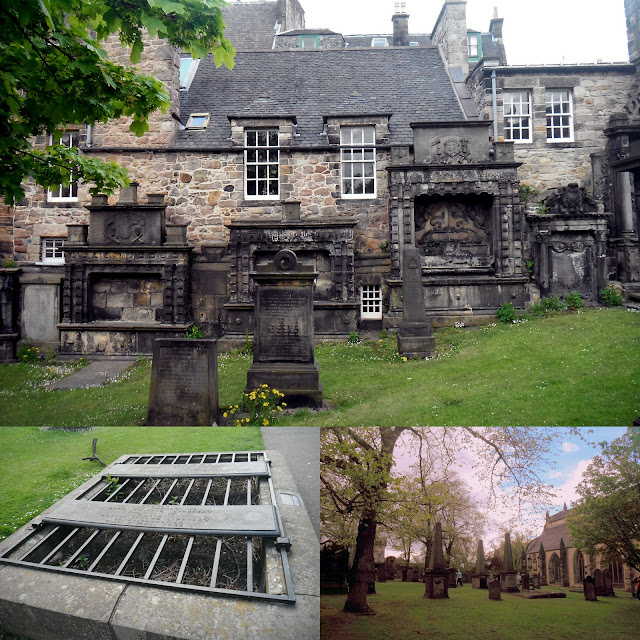 The only thing I really do remember because I had never heard of this,  was Edinburgh's Greyfriars Kirk graveyard. There had been a lot of "Bodysnatchers" in the 19th century, who stole the bodies for the medical and private anatomical schools. Apparently it was a very lucrative business. To protect their dead relatives, a family member used to sit on the grave for at least 3 weeks or the graves where protected by iron bars. It was a rather eerie place and the guard didn't wear a kilt either ! 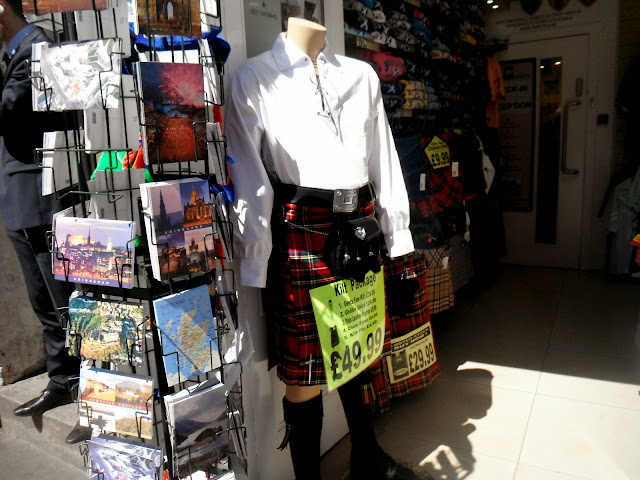 What we saw "en masse" were kilts to buy. But I can't imagine Mr. G. wearing a kilt on Waterloo's market when he goes shopping. Instead of buying a kilt, I bought a scarf from a real Highland sheep ! 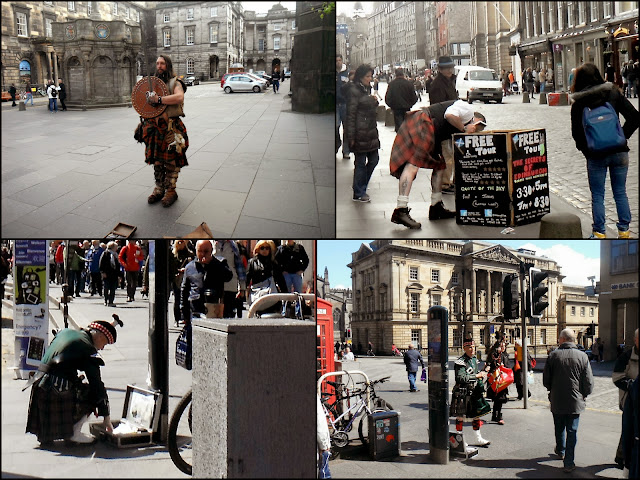 Of course we saw a few men in kilts, but it was their working clothes for the tourists. The guy with the shield suddenly jumped on them and most of the people laughed, but not all ! 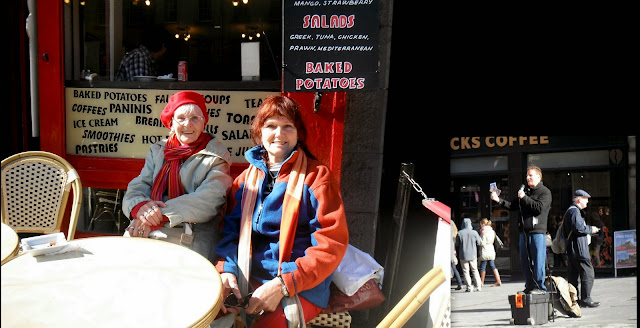 Before we returned to the hotel, we had a baked potato  and pitied the guy who talked for hours about our sins and what to do to follow Jesus. Of course nobody listened. He must have lost his voice at the end of the day. 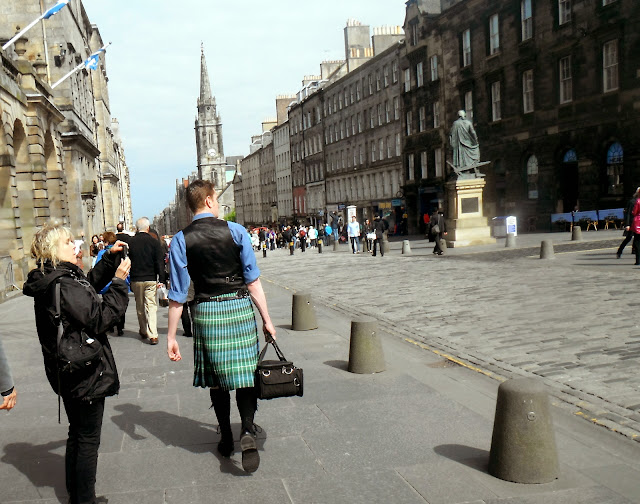 and then finally, near the station we saw a real Scot, just coming out of his office ! Not quiet Sean Connery, but still ....
Posted by Gattina at 06:00 17 comments: 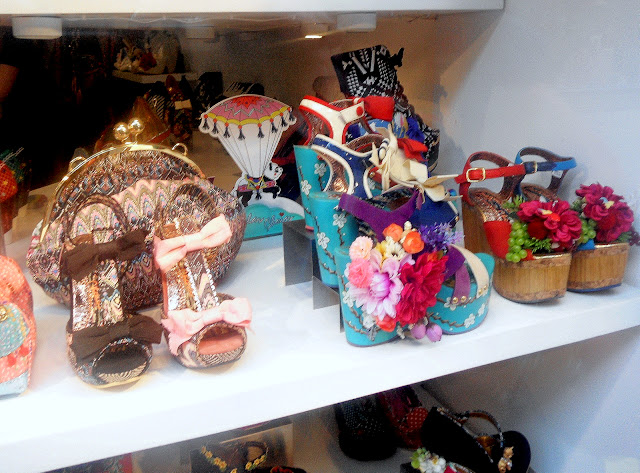 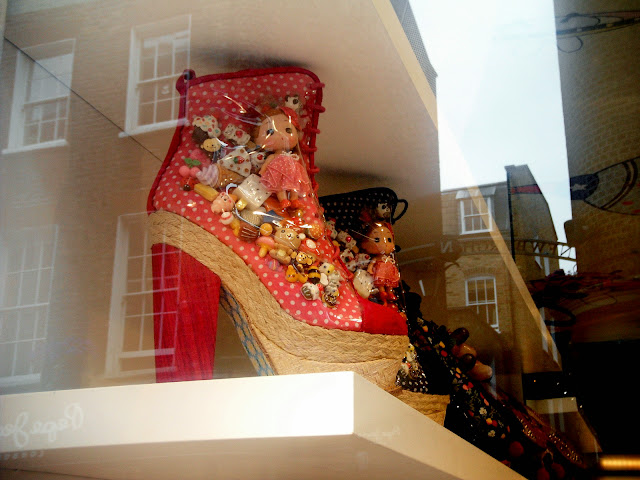 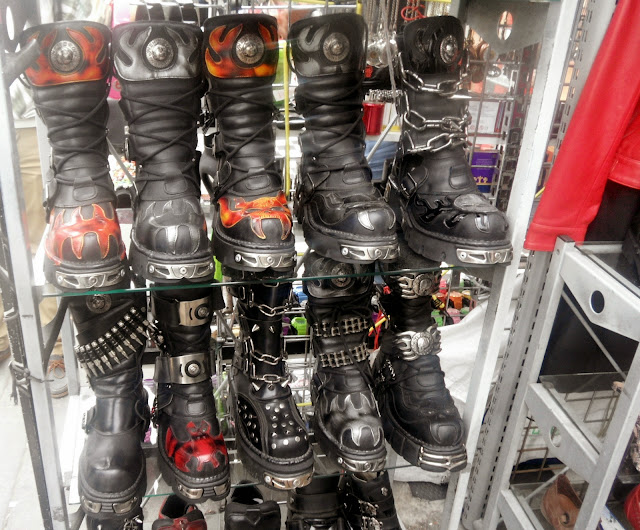 Seen in Camden Town, London
Posted by Gattina at 06:00 9 comments:

As usual wherever I go my friends the Romans have been there already even in the UK and they left a lot of traces ! One of them is Hadrian's Wall.

Helps you to remember what you have done on the weekend of June 15 . If you participate please put the little logo on the top of your post and leave your link. 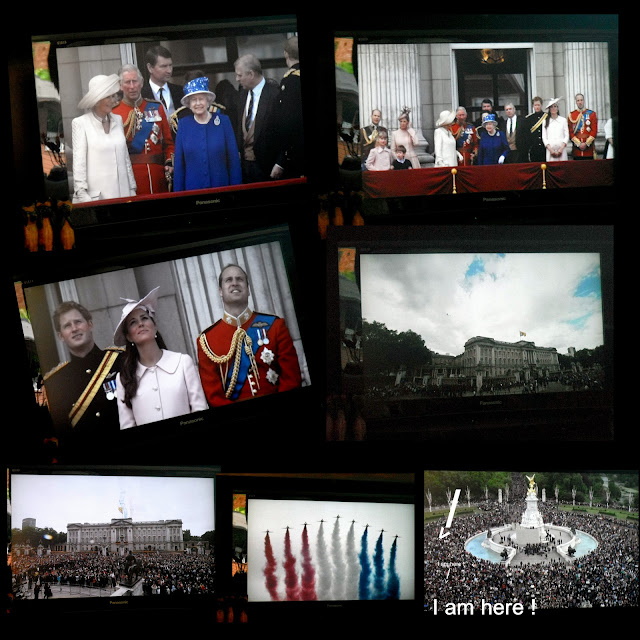 On Sunday morning I was in London attending the Trooping the Color, as you can see above, while I was laying on the sofa and had a cup of coffee !

I finally had sorted out my holiday pictures and had invited my friends to see them on TV all together.
Mr. G. installed his multimedia device (thing), which allows to see your photos on TV. Of course it didn't work, but after some Italian not repeatable words, the thing finally worked. 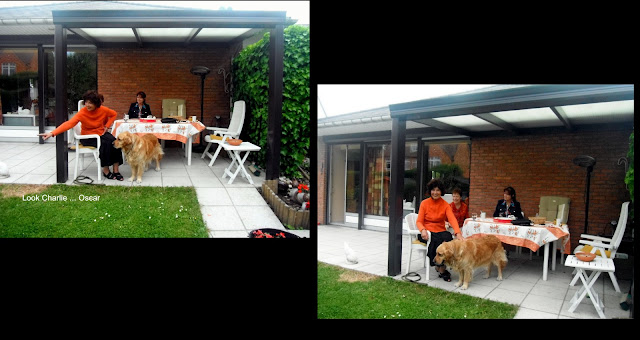 The first one who arrived was Chantal, but she was more interested in seeing Oscar the lawn mower robot working then in our holidays so we went outside and I put it in the middle of the grass and switched it on. Meanwhile the others had arrived too, and finally, as the weather was warm enough to sit outside, we had our coffee, tea, and cookies sitting there and chatted while Oscar mowed the lawn. The result was, that we stayed there and Mr. G. complained that he had worked for nothing ! And while we had our fun he filled in the tax declarations on computer for Dominique and an other neighbor.That's why we are not all on the picture.

Charlie, Nicole's dog watched Oscar too and sniffed at it, found that it didn't smell at all and returned under the table warming up our feet in the hope some crumbs would drop off the table. The cats didn't mind, Charlie just ignores them, so they stayed where they were and looked at him in disgust.

We spent a very nice afternoon, and everybody said that it was the first time in their lives, they were watching a lawn mower for so long just as a kind of funny movie. Now Chantal and Dominique want to buy one too.

On Sunday I thought we had the yearly parade of the  Waterloo Battle soldiers, which is a very colorful event, but I had mixed up the dates, found Waterloo center empty and saw that it is planned for next Sunday ! Instead I went for a little walk on the market in the next town, but there was nothing special I found besides a turquoise scarf, similar to the one I had lost in Edinburgh.

In the afternoon we had the visit of Mr. G's young friend, and they discussed together about politics and business, so I escaped and returned to my computer.

Once again it started to rain and we still have cool temperatures around 15°C.

Labels: friends, Trooping the color, What did you do this Weekend

Be happy that you live now and not in 18hundred something ! If ever you would have to have a surgery, it would have been without anesthesia ! 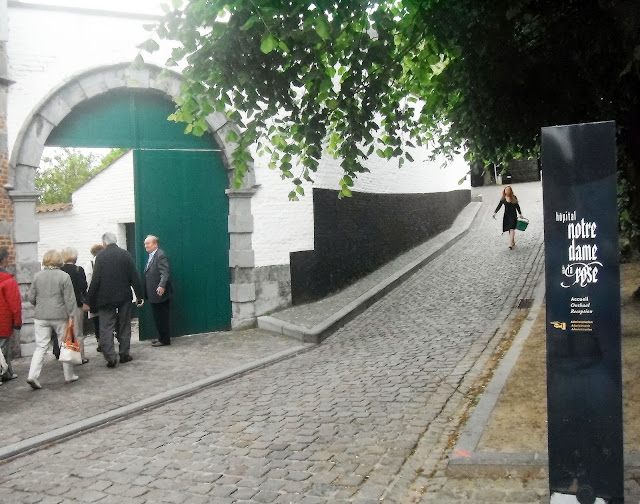 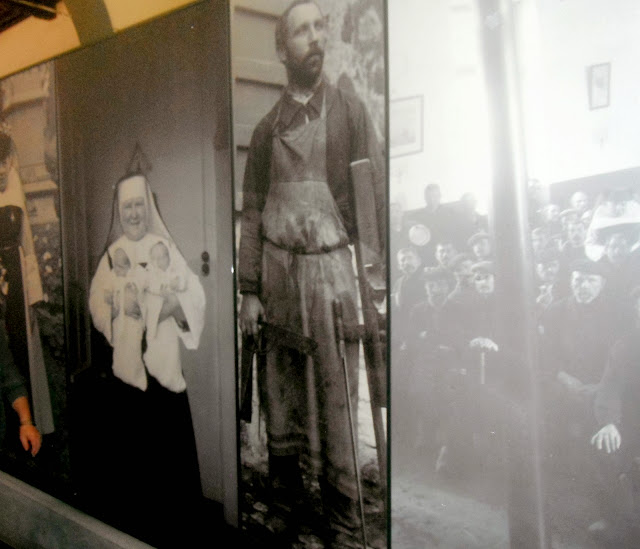 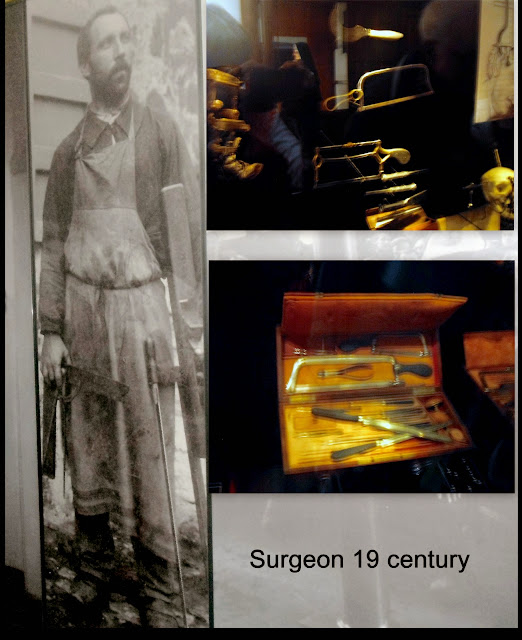 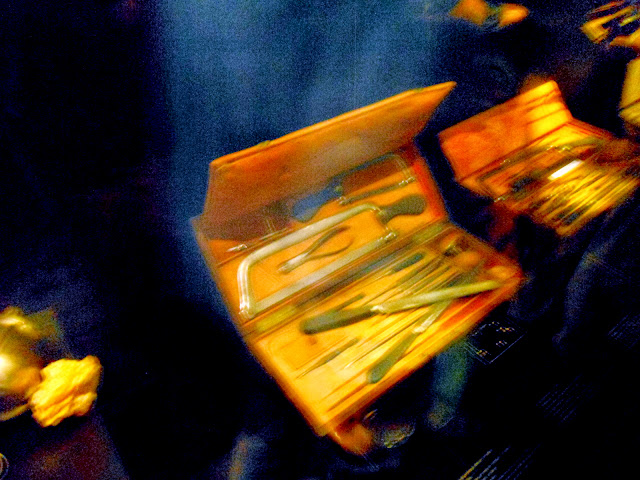 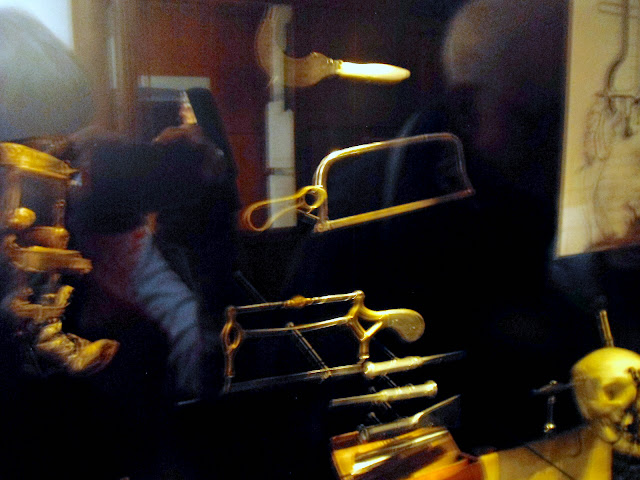 it's a miracle that people survived !

Unfortunately photos with flash were not allowed so not all pictures of the horror instruments came out clear enough. But I think this gives already an idea ! 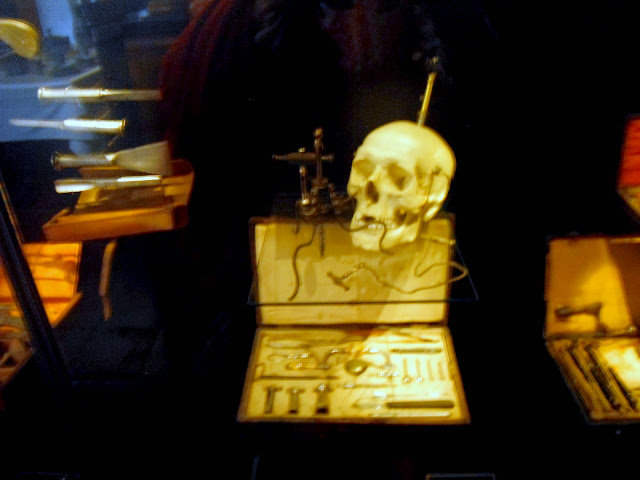 If you were not "normal" they tried to open your head by sawing off the top  and then put a screw inside to pull out the bad spirit ! The head was fixed with all these clips. 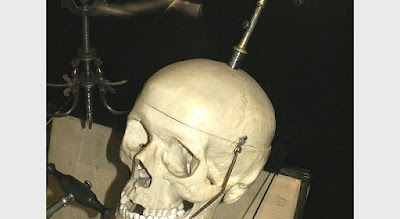 It was an interesting but rather creepy exposition !