1. On Monday we left Torquay for Falmouth. Fortunately it didn't rain while we all pulled out suitcases to the station opposite the hotel and we only had to change the train once. In the train we had a lot of fun, seniors apparently enjoy excursions more then school children ! After 4 or 5 h we finally arrived in Falmouth where a coach waited for us to bring us to the hotel. It was so late that we just had the time to storm into the dining room for dinner. The staff wasn't prepared for so many people we were 31 and just after arriving still dressed in our coats we had to choose a menu on a paper, for each person one. Then we waited and waited. Some men got grumpy because they had to wait for so long and served themselves with drinks in the meanwhile. I had a spoon to eat my cheese the cutlery was rather mixed up, some only had a knife for ice cream and we had to laugh. We were all very tired and went early to bed.

2. The next day we went to St. Ives, Lands end and Mousehole and had a view on Penzance. 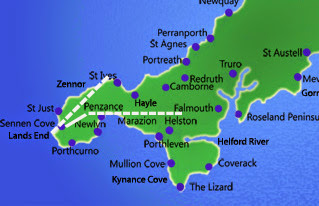 3. Again we had no time to see the hotel or the surroundings because the tour was finished and everybody went home. The majority of our group were English, there was an Australian couple which celebrated their golden wedding and a South African couple and of course we four girls from Belgium. We took the train to London. 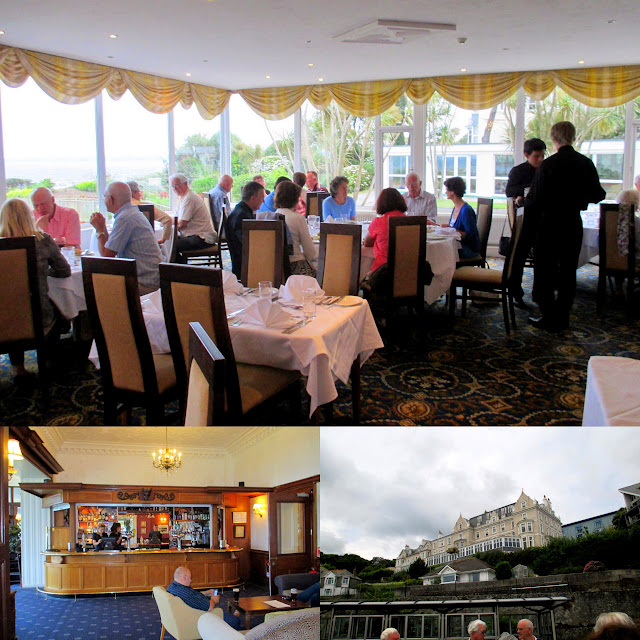 our last supper in the Falmouth Hotel

4. We spent the whole day in London before we took the Eurostar train back to Brussels (post below)

5. I was feeling put through a mangle and was very tired. When I wanted to check my bank account, I noticed that I had lost my bank card ! The only time I had used it was in a pharmacy in Torquay. Mr. G. went to the bank and blocked it, fortunately nobody had used it. This took the rest of my energy if there was any left !
The afternoon I spent in our garden and sorted out all the pictures I had taken !

LAST DAYS OF THE DEVON/CORNWALL TOUR

The last 3 days of our tour where quite tiring ! After our arrival in the Falmouth Hotel, we started a long tour. We had to take 3 trains before a bus took us to St. Ives. 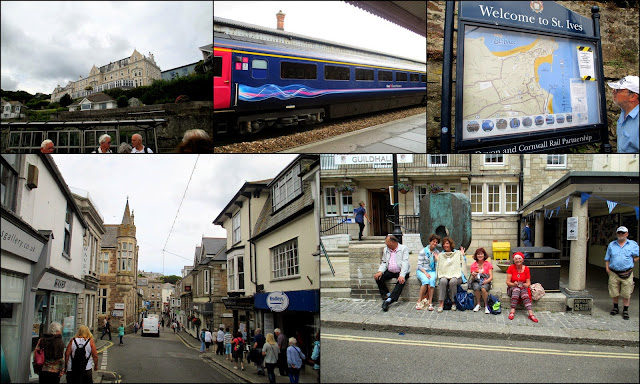 We left our hotel sitting above the station, and arrived in St. Ives where we had 2 h to visit the town. 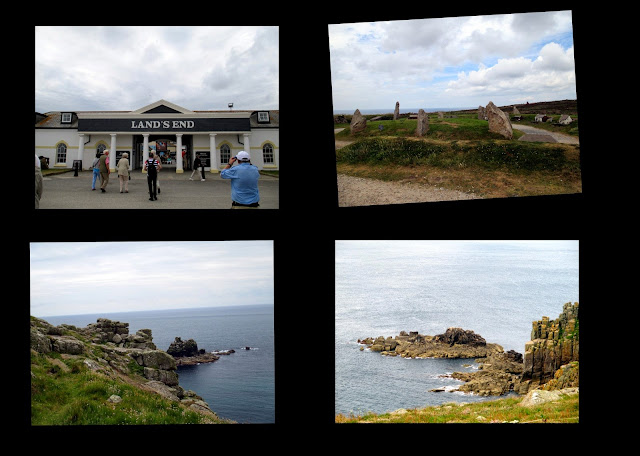 Then our bus picked us up to take us to the "Land's End", a beautiful place with an amazing landscape. Unfortunately it was cold and very windy but at least it didn't rain and the sun was shining. We walked around for 45 min and then we continued our route to Mousehole. That's a funny name I thought. 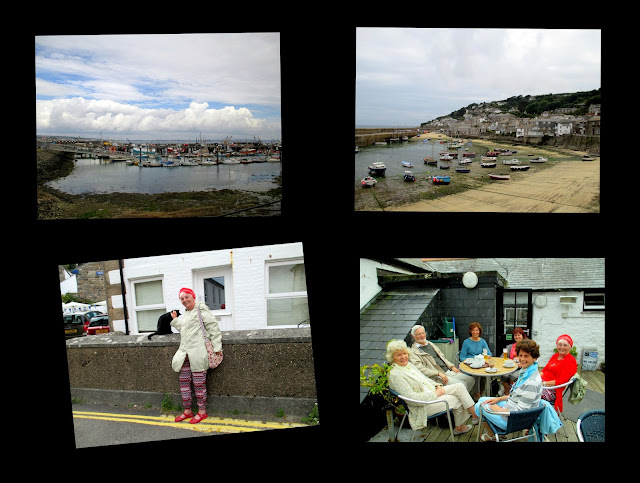 I even met a cat in Mousehole, without mouse. We found a cozy pub which had a terrace on the roof, where we sat and had a drink. Then we made the long trip home back to Falmouth, this time by bus and not by train. We didn't even have the time to change clothes, dinner was served at 7 pm and we arrived shortly before 7. We all were very tired from this long day.

The next morning we all said good bye to our group of 31 people who returned home into all corners of the UK, except two couples who came from Australia and South Africa who continued their tour through Europe. 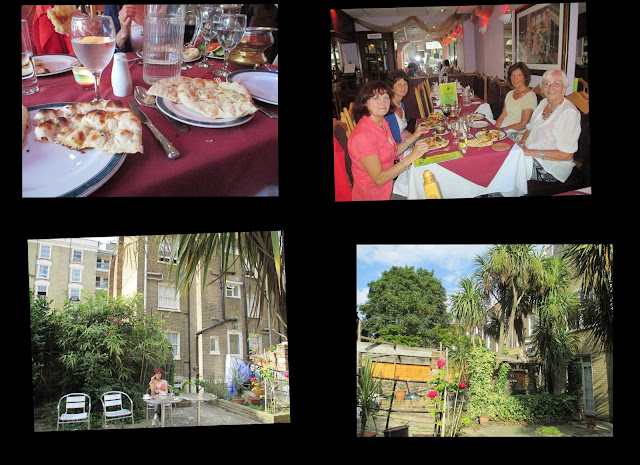 We took the train to London and arrived 5 h later in Paddington station. From there we carried our luggages into the tube to King's Cross and from there pulled them until our Hotel near the station. We were so tired that we decided not to go to London center anymore but rested a bit in the garden. Ilona and I had a room in the basement with a beautiful little garden. Finding palm trees in London was quite strange ! In the evening we found a cute Indian restaurant nearby and had a wonderful supper. I was the only one who knew the Indian food for the others it was the first time and they loved it.

The next day we had to leave Ilona in the hotel, she was feeling very sick and had stomach cramps and couldn't come with us. 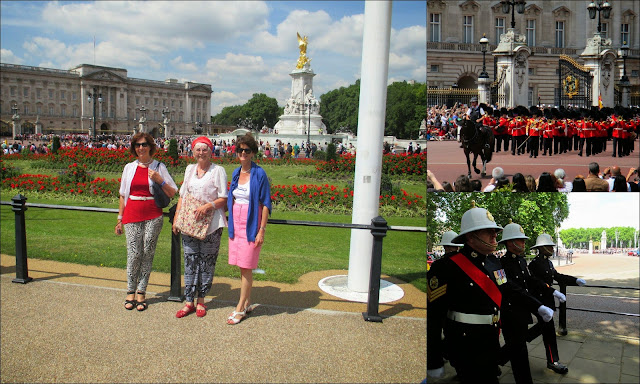 We took a bus to Buckingham palace and sitting on the top we saw a lot of London. When we arrived at the Palace it was just time to watch the "Changing the guards" ! There were so many people from all over the world that it was nearly impossible to see something except the heads !

I had enough of this crowd and we tried to get out of there which wasn't easy. And then we were lucky, we were standing opposite to palace to return to Victoria Station, when they came all marching along going back from where they came, without standing in the crowd ! We couldn't get a better view ! 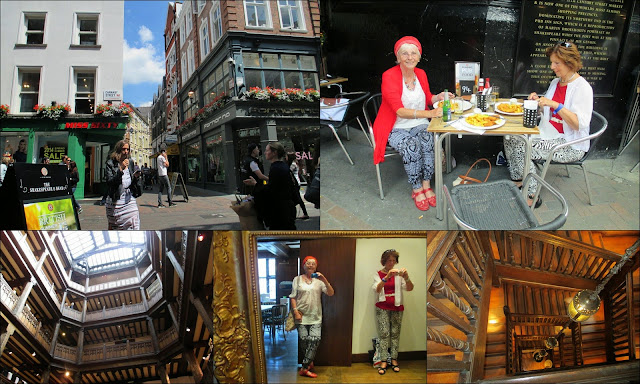 From there we went to Carnaby street where we had a nice traditional  "Fish & Chips" outside a pub from where we could watch the people, without moving ! Restored we made a tour in the "Liberty" store which took the breath away from Nicole ! She saw a beautiful scarf but when she saw the price of 250 £ (429 $) she thought it was a mistake and refrained from buying anything !

It was time to return to our hotel, pick up the luggages and a tired but better feeling Ilona and went to the station to catch the Eurostar train.

Mr. G. picked us up and was surprised that we came back from holidays in pieces !

Today I rest, and just do nothing ! Last year when I did the tour around the UK it was less tiring. the "Great Rail Journeys" should improve the program. We stayed far too long in Torquay doing nothing, and the rest of the tour was squeezed into one day from Falmouth on.
Posted by Gattina at 09:34 12 comments:


At 2 pm we left our beautiful hotel in Torquay. 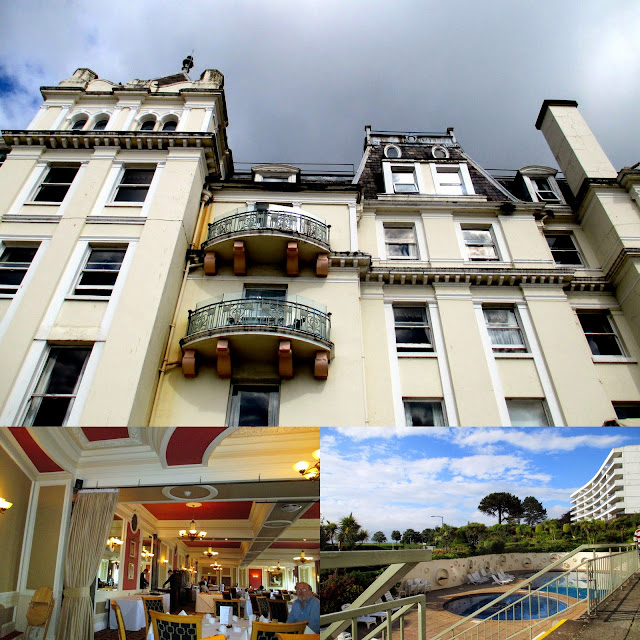 The sun was shining in the morning and we could sit outside, but when we left it rained again cats and dogs. We took the train from Torquay to Falmouth, and had to change twice, which  hadn't been a problem at all. 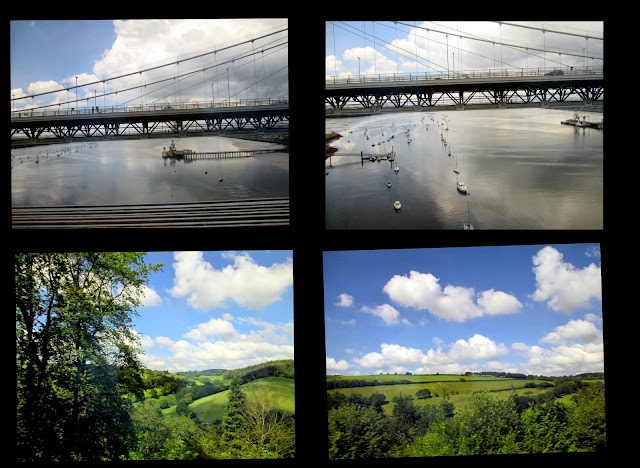 We saw the Royal Albert Bridge and the beautiful landscape of Cornwall. 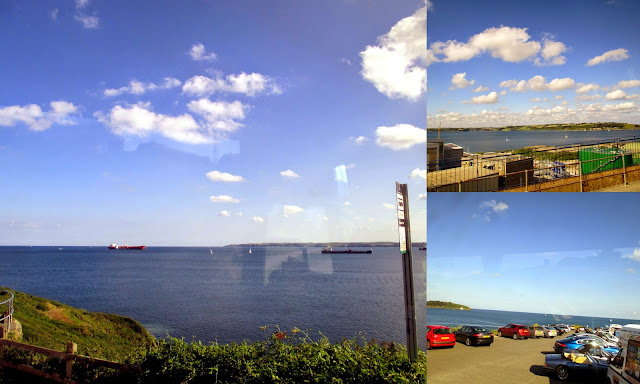 After a little more then 4 h we finally arrived in Falmouth. A bus picked us up at the station and brought us to the hotel, but he stopped to show us the Falmouth bay.

The Falmouth hotel has a completely other style then the Grand Hotel in Torquay. From our room we have a little view on the sea. 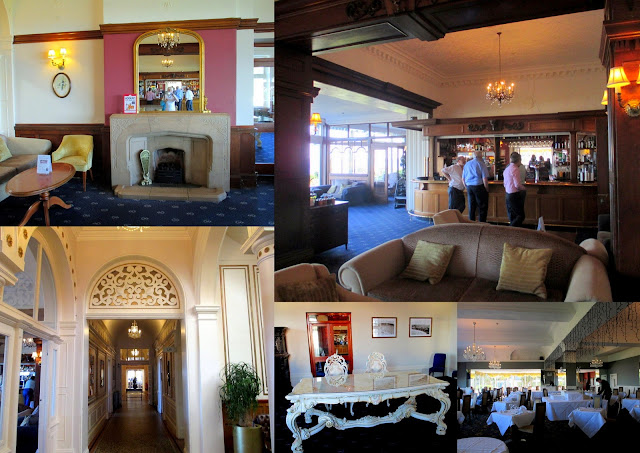 It looks nice and our supper was very good.

Today was the last day in Torquay and probably because we are leaving  for Falmouth tomorrow, the sky cried and cried and dropped buckets of water ! We wanted to visit the town center, but we were stuck it simply rained too much. 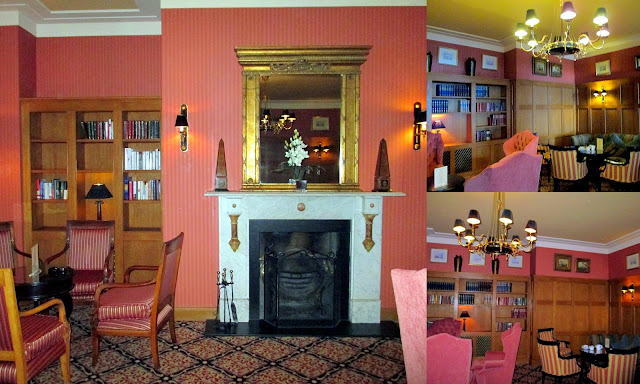 So we sat in the library and waited for the rain to stop. Finally it became a bit better and we ordered a taxi to take us to Torquay. 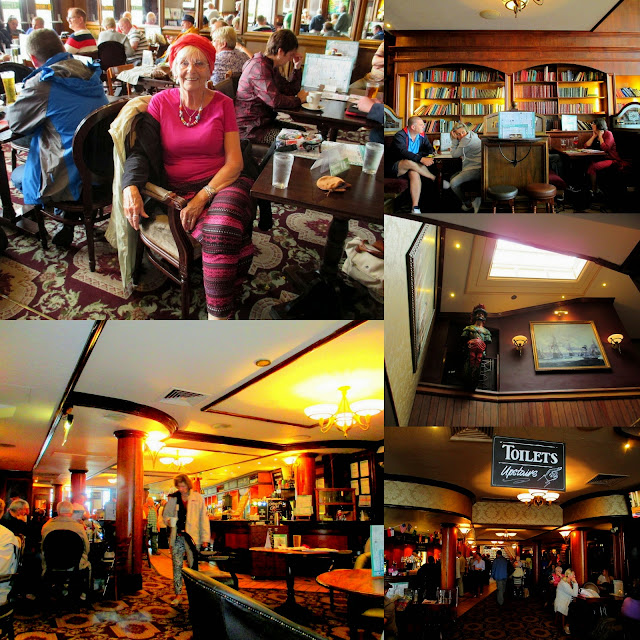 First thing we did we went to a pub and had a nice meal. Meanwhile it had stopped raining and we visited the town 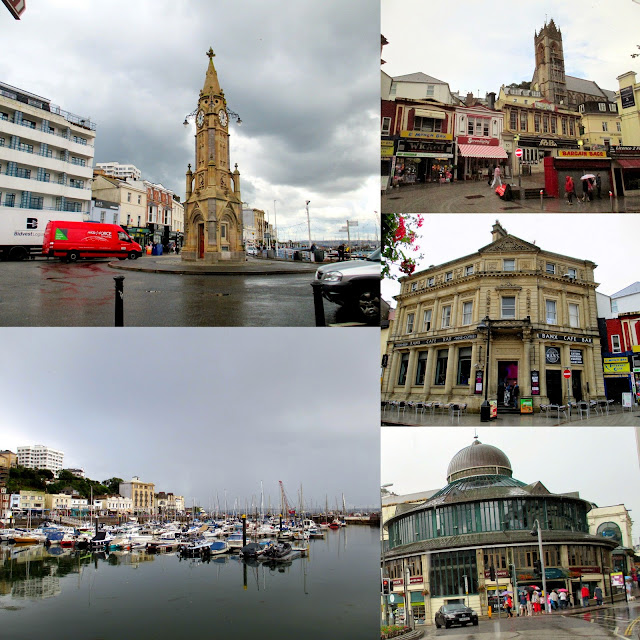 We also went to the shopping street and I bought a nice bag with owls on it (there were no cats !) 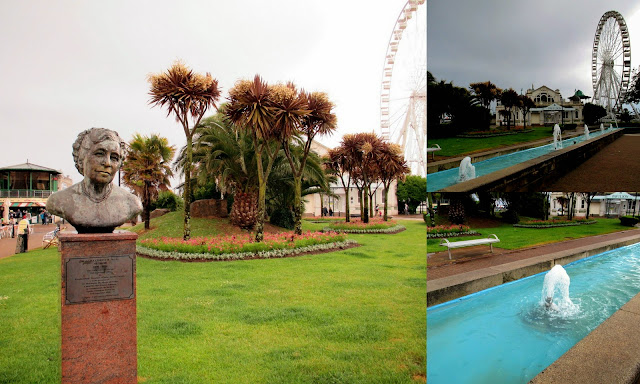 In the little park I saw a statue in honor of Agatha Christie, there also was a long water flow with fountains.
Then it started raining again and I took a taxi back to the hotel. Nicole and Dominique continued their shopping tour, I didn't go with them, I had enough. Ilona had stayed in the hotel, she didn't feel well. 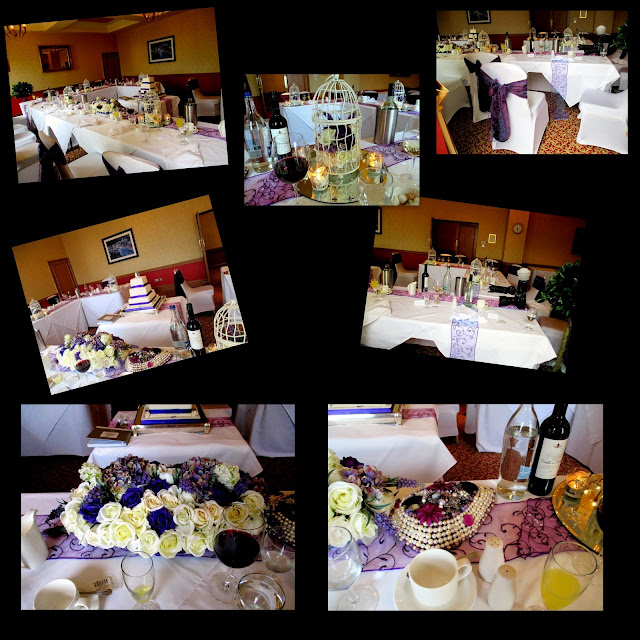 When I came back, there was a wedding reception. I went inside the room to take some pictures of this beautifully dressed table. Unfortunately I didn't see the new weds.

I also caught a little cold so I went early to bed.