WEEKEND FUNNIES - The Italian who went to Malta

A few years ago a friend of us went to Malta on holidays and brought this poster for Mr.G.

It has to be read with a strong Italian accent, with which he has no problem, because he never lost it. Not in German, French or English. When we have new guests then he reads it ! 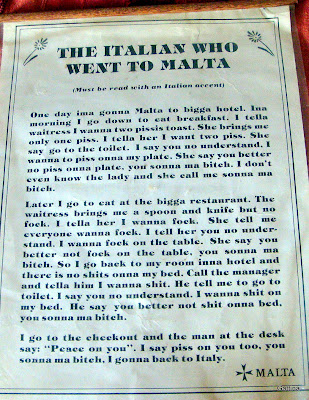 Ina morning I go down to eat breakfast. I tella waitress I wanna two pissis toast. She brings me only one piss; I talla her I want two piss. She say go to the toilet. I say you no understand, I wanna to piss onna my plate. She say you better no piss onna plate, you sonna ma bitch. I don't even know the lady and she call me sonna ma bitch.

So I go back to my room and there is no shits onna my bed. Call the manager and tella him I wanna shit. He tell me to go to toilet. I say you no understand. I wanna shit on my bed. He say you better not shit onna bed, you sonna ma bitch

I go to the checkout and the man at the desk say : "Peace on you". I say piss on you too, you sonna ma bitch, I gonna back to Italy !"


Accents can sometimes be very funny, be assured that I don't sink but think !
Posted by Gattina at 06:00 7 comments:

1. Since I made a cross on summer, I feel much better. Now I wait that the trees get colored and then do their annual striptease, and I can look for pumpkins to put in my flower pots. I hate these in between seasons except spring ! 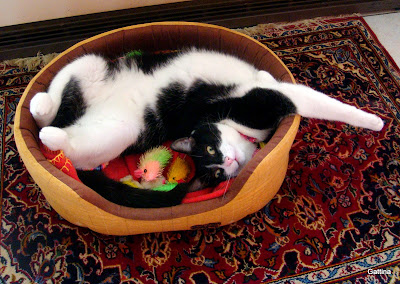 But looking at Rosie in her basket keeps my mood up !


2. After I had given up on summer, of course it came back just for one day and we could eat in the garden of my favourite Asian restaurant. Now on Mondays they serve a buffet where you can eat as much as you want to for 10 € only ! We had a lot of fun because everybody was in a good mood, sitting outside in the sun and enjoying good food !

3. I spent some time on Ebay, it was the first time I wanted to buy something, and was surprised about all the stuff which you can buy or sell that suddenly the whole afternoon was gone !

4. Finally I was watching the time and bid at one second before the end (for those who don't know, everything is sold in auction) and got this nice little chair for only 18 € ! It's a well known brand mark and very comfortable, at least I hope so I didn't try it out and the cats neither. I will keep it here so the little Prince can sit with Nonna and Nonno (Grandma and Grandpa in Italian) and the cats ! 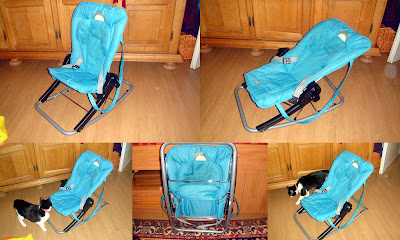 3 positions and approved by Rosie

When I picked it up near Namur which was about 40 km from Waterloo, I thought I could also take some pictures of the beautiful landscape but it rained so much that I was already wet just of getting out of my car and into the house ! The young mother was very friendly and finally I stayed there and we chatted together for an hour before I returned home with my little chair ! Mr. G. had already hoped thought that I had got lost and disappeared forever.

5. The best was yesterday when my painting class started again after the summer holidays ! Of course from the 3 h class, we chatted at least for 2 h and the coffee break was a real long one ! But we had so many things to talk since we hadn't seen each other for almost two months. I think somebody who watched us from outside thought he was in a chicken yard rather than in a painting class. 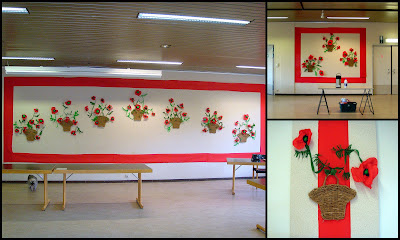 Our class looked like this, the old ladies of the retirement home had made the decoration and had decorated their party hall, which is also our classroom. I took the picture before everybody arrived. It makes the room so cheerful !
Posted by Gattina at 06:00 21 comments:

I think this will please all men !

13. reasons why a computer is better than women

1. Computer does not care how you look.

2. Computer can’t be angry if you not respond immediately.

3. Computer always wait for you

7. Computer did not accept calls from previous users.

9. Computer doesn’t ask: “Do you have another computer?”

12. Computer can’t look your phone book or digging through your pockets.

13. Computer is simply Start and Shut down

and who has the last word ? 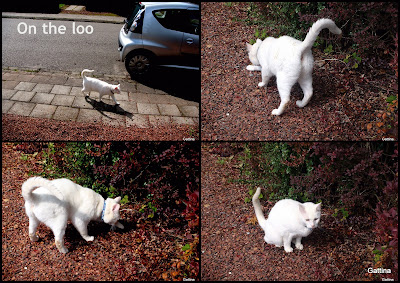 Helps you to remember what you have done on the weekend of September 11, 2010. You never know if you need an alibi ! If you participate please put the little logo on the top of your post and leave your link.

The weekend started very nice. Our son arrived to put some of his stuff in our basement because they have to empty a room for the baby to come in November. 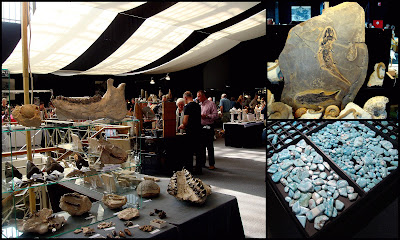 In the afternoon I and my friend visited a very interesting exposition of minerals, fossiles, precious stones and jewelry. I had never seen such a lot of beautiful stones together. It really was amazing. I will write about it in another post. Above you have an overlook on the exposition a fossile and a display of turquoises. There were professionals and private collectors of course and I as an amateur ! 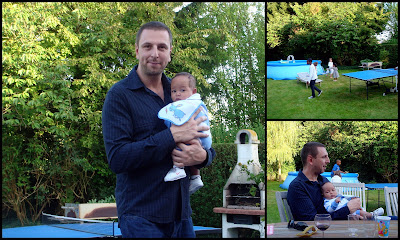 While I was admiring stones and fossiles, my son was invited to the birthday of his godchild little Camille who became 4 that day. Here he is baby training with the little 2 1/2 months old brother. I joined later and it was real fun. There were 4 couples and 2 friends of my son's friend and lots of children playing in the garden. I found they did a nice publicity for "The united Colors of Benetton" because there were whites and multicoloreds. It was a warm afternoon and we all could sit outside.

On Saturday we wanted to go to the "Festival of Environment" in our Waterloo parc, which is always very nice and where you can buy all kind of food and vegetables directly from the farmers. 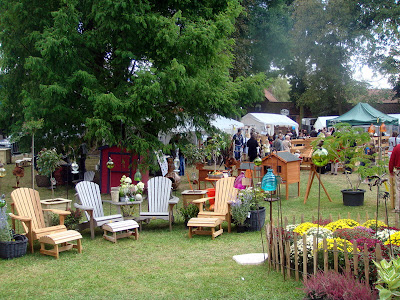 it should have looked like this with plenty of people and farm animals, but once again the
weather had changed into a very rainy and grey day. 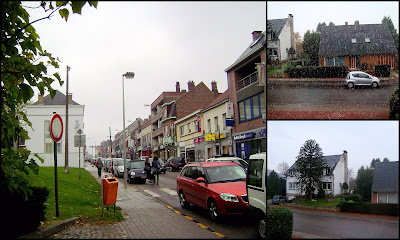 When I looked out of the window and saw the cats and dogs falling on the street, we choose to stay inside chatting and putting the things in the basement, until he left late in the afternoon. What a pity !

Labels: Brussels, What did you do this weekend ? mineral exposition


When I was in Eastbourne (UK) on holidays with my friends, one Saturday I told them that I had to write something for "Summer Stock Sunday".

My friend looked at me and said, that makes no sense. I only could agree, I know the word summer at least out of the dictionary because in reality it's hard to remember a normal summer and I can only imagine pictures. On the other hand "stock" so far meant to me the things I keep in my basement like a stock of peeled tomato cans and according to the Google dictionary it also means : An instrument that signifies an ownership position (called equity) in a corporation.

These two words put together would mean that I should live with a stock of summer sunshine, inside my body to keep my equity (or equilibrium) and then of course it all makes sense.

Meanwhile I bought two new ombrella, for 5 € each, because I already lost 3 ! I take them with me because it rains and when it stops raining I forget them and usually I don't remember where. Bad weather on top is expensive.

With all this I learned something new which apparently only exists in the USA as in the UK it rains as much as in Belgium and the weather is more or less the same !

The Summer STOCK THEATRE ! It is a theatre that generally presents stage productions only in the summer time in the United States.

Summer stock theatres frequently take advantage of better weather by having their productions outdoors. Which explains that for this reason I didn't know this expression, because if plays would be performed outside here all actors would be wet and the public too !

As it will be summer until September 22, I will pretend that it is summer, and keep my summer clothes on, I only have to add a thick hooded anorak and my optimistic mood sing in the rain and cause accidents ! 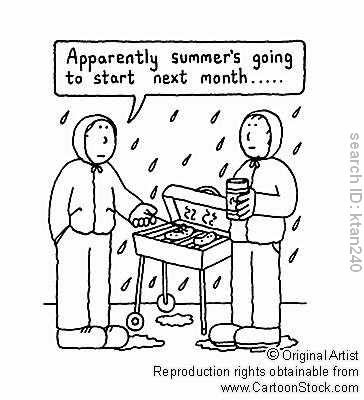