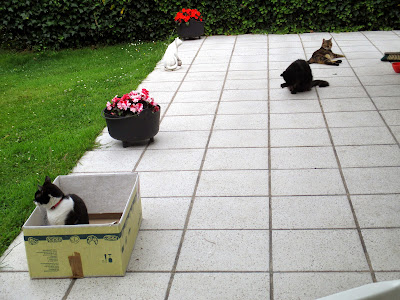 I didn't know that it was the last day of sunshine for the whole week, and fortunately I decided to take my computer outside and worked there, surrounded by my cats and interrupted from time to time for a little chat over the hedge with Dominique who fought with weeds in her yard.

2. The next day the temperature dropped drastically and it poured the whole day. Impossible to go out when it was not absolutely necessary. As I didn't need anything I watched the street while sitting at my desk and stared from time to time into the rain curtain. Not a single soul was in the street.

3. It got even worse and I had to put the heating on, in July ! It was impossible to sit still unless you dressed up like an Eskimo. Eventually I decided to go out and buy some plastic cases to put my necklaces in them, which were mixed up in a box and I thought I could open a shop ! Now I need some labels for the boxes to know which necklace of which color are in the different boxes.

4. My neighbor is in hospital in intensive care, nobody knows exactly what she had, not even the doctors, but she was dead for 20 sec and they had to do heart massage. Now she is out of danger and could leave  intensive care. 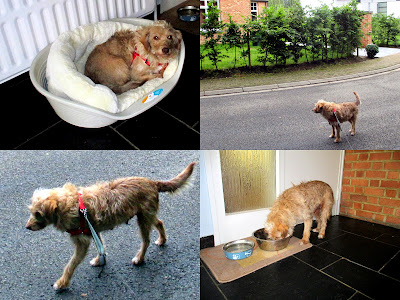 Her daughter asked me to walk their dog once a day, because she is working and the poor thing was all alone at home. Maybe Gribouille (don't ask me what that name means) is not the most beautiful dog, but she is a real sweetheart. She had a hard life behind her as a farmer's dog and had to live outside. Now she is spoiled and so thankful ! 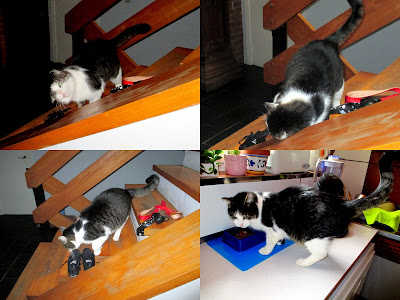 The cat Gédéon kept her company. He has only one eye, the other he lost in a battle a few years ago !  But as it rained so much, they both refused to go out and finally I gave up and put the leash away. In the evening we were invited for a Sushi dinner at Dominique's for my birthday and it was delicious. I showed her the pictures I had taken in Devon and Cornwall and we had a nice time.

In the morning I had gotten this beautiful bouquet from Mr. G. and lots of phone calls 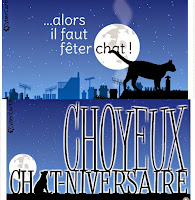 and also some cute cyber cards, even from the hotel in Egypt, probably to remind me to come again this year.

5. Some girls of my painting group had decided to continue to get together once a week during the school holidays. This was a welcomed opportunity to get out of the house and we had a very cheerful morning without painting very much !

Ilona, Nicole and I decided then to have lunch together in our favorite Asian restaurant and had a very nice meal. We talked about our holidays together, and comforted Ilona whose mother is in hospital she had a hip surgery and terrorizes her with all kind of stupid demands like bringing her pink towels instead of the blue once she had ! And poor Ilona lives 1/2 h by car away !

When I met Mr. G. he worked in the Hilton Hotel in Brussels in the Room service while attending courses in computer sciences. In the 60th you didn't need 4 years of University studies, you could get your diploma in 3 months and you were hired immediately. It was the start of the computer area. 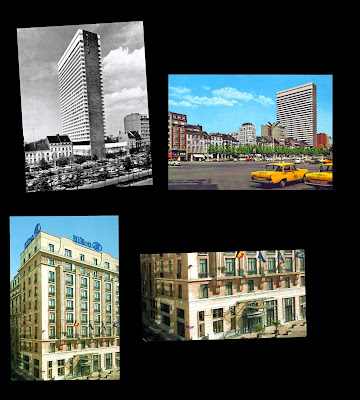 The Hilton Hotel was in a huge modern tower in the 60th and was the best hotel in Brussels. Mr. G. saw President Nixon there, for whom 3 floors had been emptied one above his room and one below. Later Ted Kennedy came with his wife and they were using the room service mostly for ordering strong drinks and they were always well out late night. Breakfast started with a glass of salt and water.  Mrs. Kennedy once bumped in the door of the elevator, she couldn't walk straight anymore, hurt her head so badly that she needed some stitches and had a blue eye. Of course when you work in such a Hotel you also see a lot of famous people's private life, which of course is not always mentioned in the press. He really could write a book about what happened there. Today the awful looking tower houses offices and the Hilton moved into a more beautiful building and is not the best hotel in Brussels anymore.

Ever since I travel with friends I was staying in a lot of hotels. 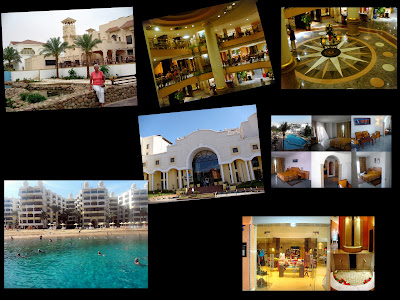 Palace looking like Hotels are very common in the tourist areas of Egypt. They are beautifully decorated with marble and artwork and very spacious corresponding to at least a 5* hotel in our Western World. Unfortunately the guests, especially the Ukrainians or Russians demolished the rooms, stole everything which they could take, even toilet covers, cutlery, bath towels, pictures etc. For us "normal" guests it was just unbelievable. 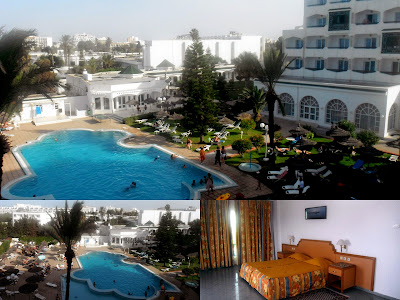 In Tunisia too I always stayed in "palaces" and once even got the honeymoon suite. It was such a big room, that I almost got lost in there. 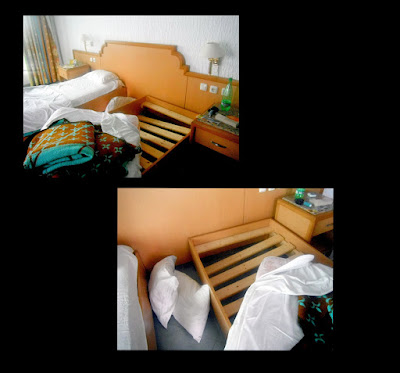 In this "royal" suite, I had a nice surprise. I sat on my bed and it broke, I found myself  sitting on the floor with the bedlinen and cover over and around me. Of course they promised to repair the bed immediately, but when we checked out it still hadn't been repaired, the room maid had even made the bed and had put the mattress back on the broken frame, on which I had finally slept on the floor ! 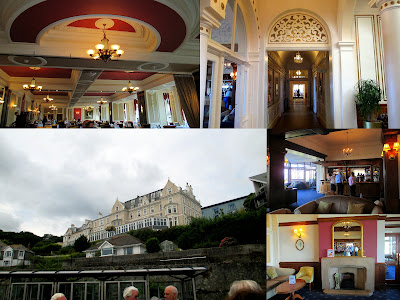 The Falmouth Hotel in Falmouth was a very beautiful hotel at least concerning the common rooms, like the entrance hall, the reception, the bar, the dining room and the staircase.

The rooms were a different story. The toilet flush didn't work on the 3rd floor which everybody found rather annoying it was only working again the next morning ! Impossible to take a shower, the water mixer didn't work and only very hot water came out. I had set a temperature and my arm became red like a lobster. I decided to do a cat wash.  The cold water tap didn't work either it turning like a spinning wheel and only hot water came out. During breakfast we heard other shower adventures, so we hadn't been the only once.

The nicest surprise I had was in London this time. We stayed in the Swinton Hotel,  a small bed and breakfast hotel near the St. Pancras station . Our room had the size of broom closet, but everything worked perfectly and the beds were good. The surprise was this : 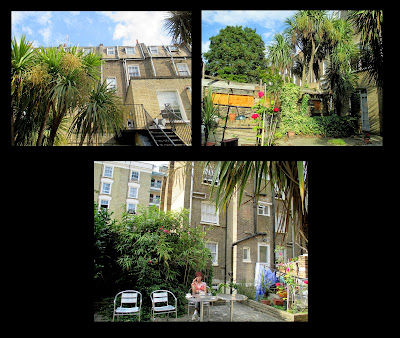 there was a door between the beds, leading into a beautiful little garden with palm trees and roses in the middle of London ! Needless to say that we spent most of the time sitting there in the sunshine. 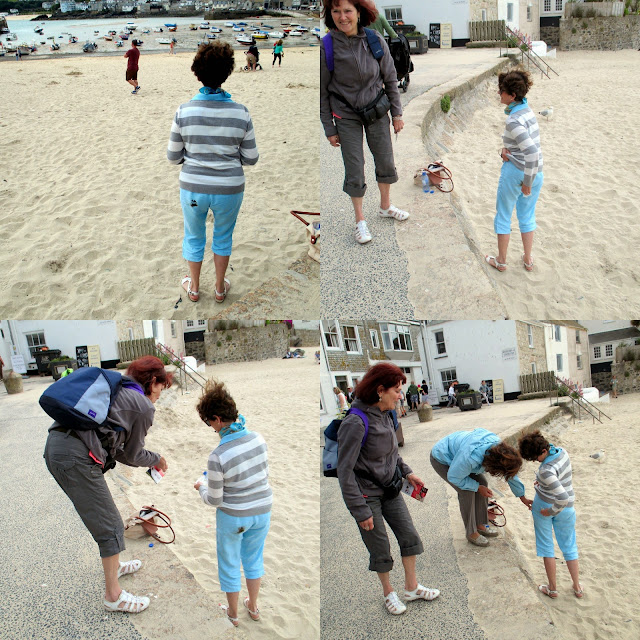 Victim of a Cornish seagull

End of June 2014 I did a tour together with 3 friends with the Great Rail Journeys. Our tour started in Torquay where we stayed for 4 days.
read more here.....

MY WEEKEND OF JULY 5

Meanwhile I had recovered from my cold and fatigue from my trip through Devon and Cornwall but still needed some calm. For that sorting out pictures and making albums was perfect. 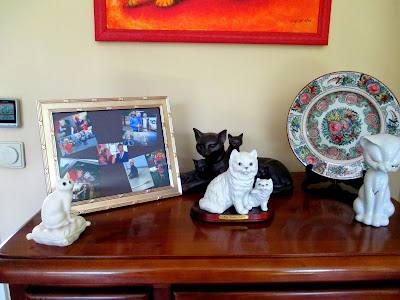 I also put new pictures in my digital photo frame with some of my tour and some others and made a new collage for the frame in the living room. Grandson Toby grows so fast and changes, that my several months old photos had to be updated. 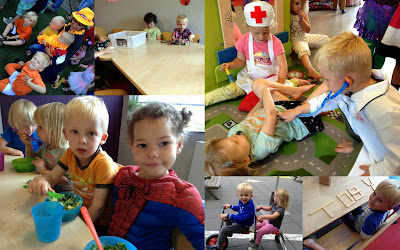 My son had sent me a link to the Website of Toby's creche with pictures of him, they take during the whole year to show to the parents and grandparents what he is doing the whole day. I picked out a few. He is already playing "doctor" !

On Sunday Mr. G. was glued on the TV screen to watch his Formular 1 ! (Not the football). I escaped to Nicole to bring her the photos I had taken on our trip and put them in her computer. 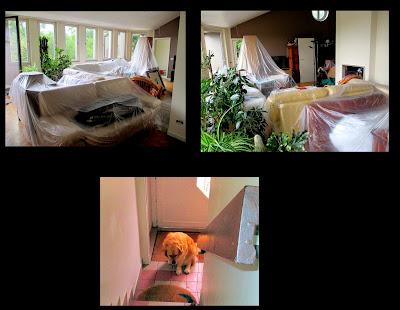 It was very "cozy" in her flat, as she has the painters. Poor Charlie didn't know where to stay and choose the entrance. We sat on her terrace but not for long it started raining and we had to go inside. We sat in her kitchen and talked about our holidays.

I baked the first bread in my bread maker, after my return and put some dried onion shreds in the dough, if it tastes as good as it smells then it will be perfect.
Posted by Gattina at 06:30 7 comments: