I started the week with a lazy day, between computer and TV, the rain had come back and it was rather cool too. I wonder when I can sit outside !

Looking at our living table I suddenly found it very dirty and used. The brass of the legs and underneath had become a bit black and wasn't shiny at all anymore.

Off I went to buy some black color instead of shrubbing the brass and painted the brass in black ! 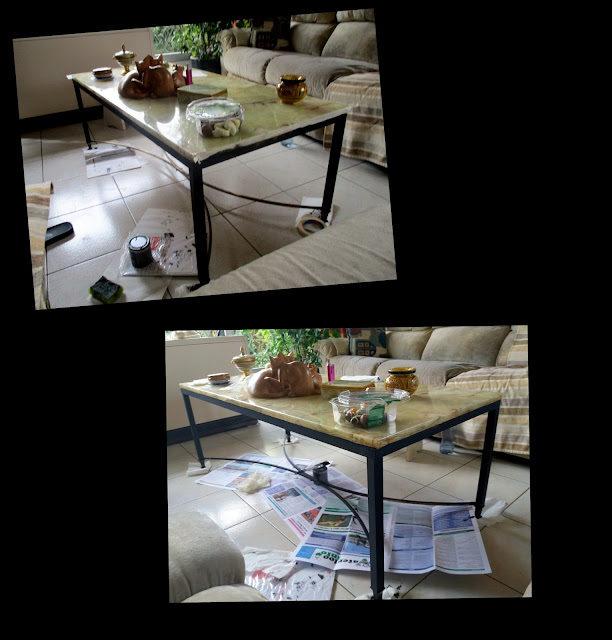 It took me two days, but it was worthwhile because now it looks completely new ! I only had to paint one lay, the color covered everything at once. Instead of reading the notice before starting to paint, I read it when everything was finished. To my surprise it was a color with which you paint school blackboards ! Such thing can only happen to me, but the color is really good !

Mr. G plays Whist in his club 3 times per week, which is a good occupation for him and for me it means a "free" afternoon. After nearly 50 years of living together I think I am not the only one. Fortunately my friends have difficulties with their computers and on the days where he doesn't play cards, I send him to explain and help to solve the computer problems. This time he had a lot of work because my friend had a real mess in her computer.

My friend Bunny had her birthday. The funniest thing is that she was born on the same day, the same year with 6 hours difference as Mr. G. She in New York, he in Italy. So she calls him her "twin" brother. 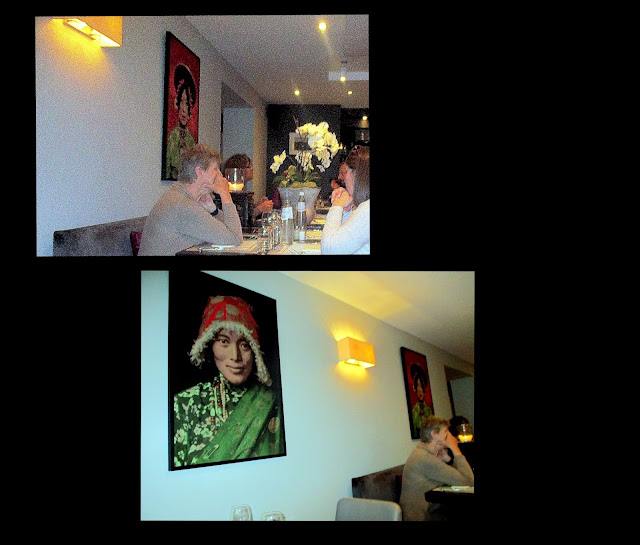 I invited her to a Thai restaurant, where we had a delicious meal. When I wanted to pay at the counter a man stood behind me and I (probably) stared at him, because I thought he looks like Prince Laurent the brother of our King. Finally the curiosity won and I asked him "Monsieur are you Prince Laurent or are you his double" he smiled and answered "No I am the original" ! 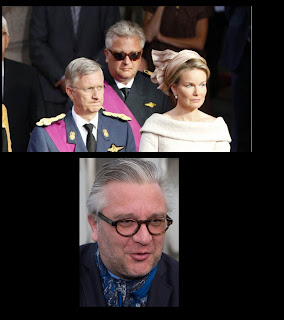 I told my friend, you see in what posh restaurant I invite you where you even meet a member of the royal family ! In reality it's a nice restaurant but not especially exceptional, the kitchen is good and the prices too.

There are still Easter school holidays and we don't have our painting class during that time as if we were still at school. Therefore instead of Monday we play scrabble on Thursdays. 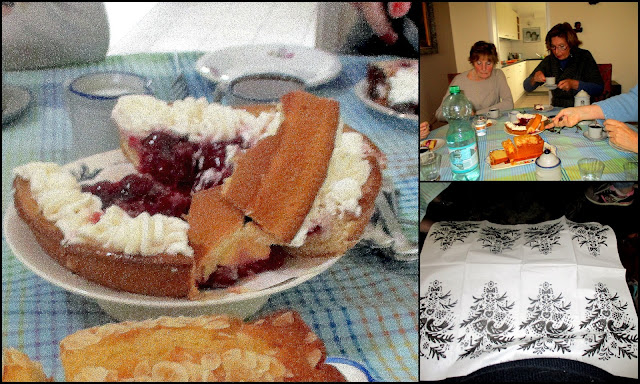 This time it was at Nicole's and when I cut a piece of cake, it turned over and we laughed. Nicole instead of spring napkins had given us some from Christmas. We had a real nice afternoon ! The two  (above right ladies) are 80 and 79 !

For Mr. G's birthday I had painted a photo of our grandson, by an artist in Egypt. 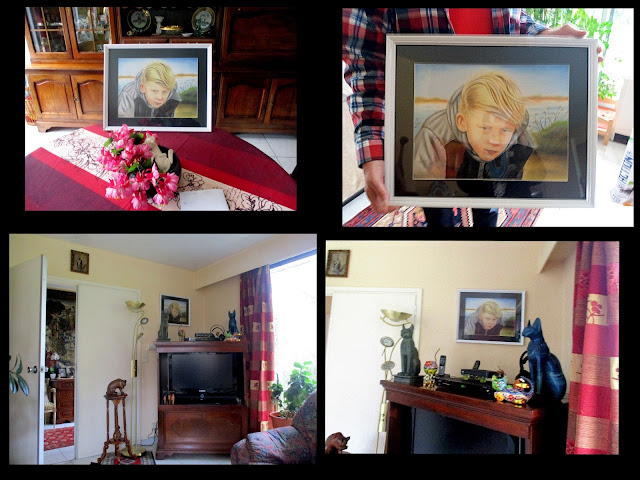 Mr G. was very happy with his birthday gift and even took a hammer and a nail to hang it up over the TV.

Through my Facebook group of Waterloo, I finally found somebody to do the garden. Apparently they are 3 and do everything also electricity and plumber work. Ideal for old couples ! He came punctually which is rather seldom when you wait for a worker ! Late afternoon it will be ready, hopefully. 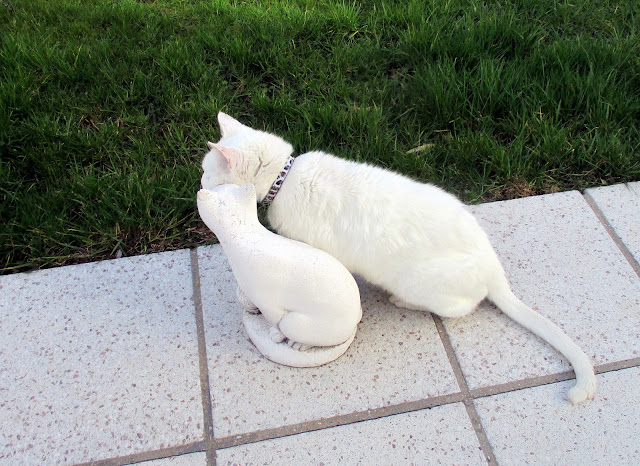 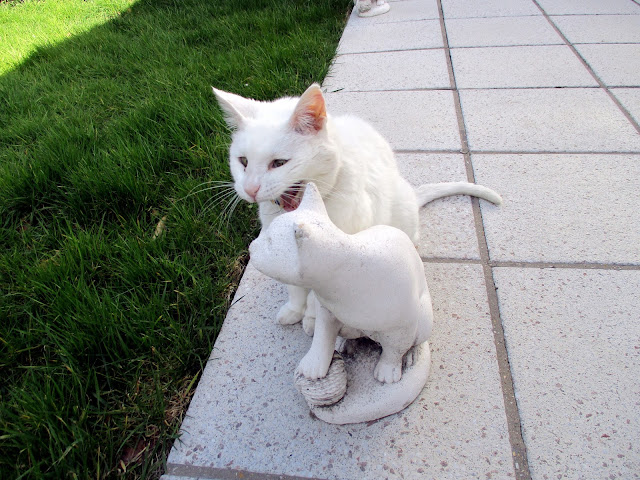 
1. April is National Jazz Appreciation Month. Are you a fan? If so what's a favorite you'd recommend to someone new to jazz listening?

I like as music Jazz, but I can't think of any special title.

2. Mandolin, ukulele, harp, accordion or banjo...which would you be most interested in learning to play? Or do you already play one of the instruments listed?

Banjo is quite cheerful, harp romantic, but I do not want or cannot play any instrument.  I prefer listening.

3. Do you judge a book by it's cover? Elaborate. You may answer in either/both the literal or figurative sense of the word.

I don't really know it could be,  usually I read the resume and see if it is interesting or not.

4. According to a recent study the ten most nutritious foods are-almonds, cherimoya (supposed to taste like a cross between a pineapple/banana), ocean perch, flatfish (such as flounder and halibut), chia seeds, pumpkin seeds, swiss chard, pork fat (shocking! but I don't think they mean bacon), beet greens, and red snapper. Are any of these foods a regular part of your diet? Any you've never ever tasted? Which would you be most inclined to add to your diet?

For me it's simple. I don't care what I eat it just has to be good and tasty.  I never tasted cherimoya, chia seeds, and  red snapper I even don't know what it is. Probably I can't buy it here either.  I wouldn't eat any insects or roasted worms.

5. Besides a major holiday what is the most recent thing you've celebrated with your people? Tell us how.

The most recent was Easter, but we didn't do anything special. But there are upcoming birthdays to celebrate.

No special thoughts, just what do I serve as supper tonight ? And what to do on Mr. G's birthday, he doesn't want to celebrate. I think I will invite two friends for an afternoon cake and coffee.

I participated in an excursion to the region Avesnois in France near the Belgian border which had been organized for the seniors of our city. Located in the south of the Nord département, it is so green that it is known as "The Little Normandy of the North". A little paradise for green tourism, hiking and cycling... It is an area that was classified as a Regional Nature Park in 1998 and which is famous for its wooded countryside, its forest-covered slopes ...

We only saw this through the bus windows and unfortunately not too much because it rained a lot the whole day. 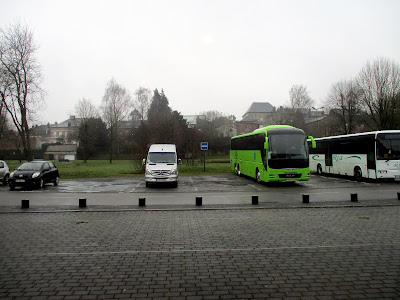 we were in the green bus

But the purpose of this excursion was not for the landscape but  visiting the industrial life of this region in the past. So the rain didn't bother us too much.

We first stopped in Fourmies where we were served a cup of coffee and a huge croissant.

Somebody had recommended me a new lung doctor in a little town near Waterloo. I have to say I was a little fed up with my pneumologist because she was very expensive and a real pessimist, because I got the impression that I had already one foot in my grave. 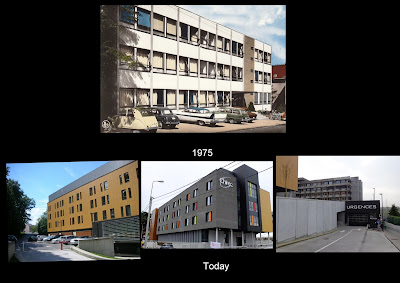 We all were used to go to the Braine hospital belonging to Waterloo too, but it had become a real factory over the years and it's not at all the same anymore. You are just a number. 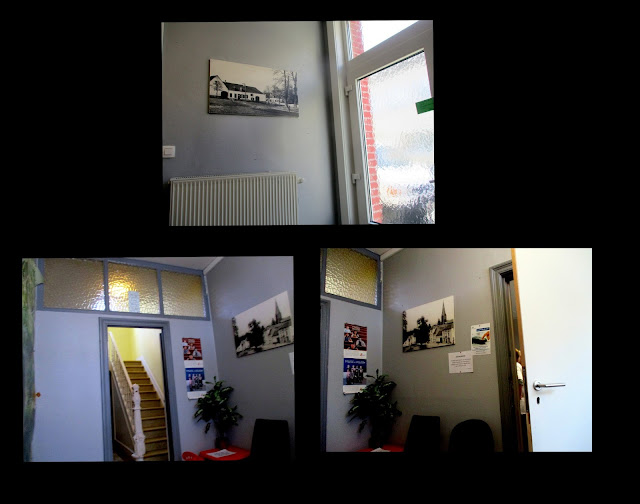 This one was a medical center and in a house, it was old, but the machines were the same and modern and that's what counts. The doctor was very friendly and competent and an optimist, he prescribed me a new inhaler and told me that I don't have to worry.  I paid less then half because in Belgium "posh" doctors can ask what they want, but the health insurance always pays the same amount for the consultation.  I was quite happy with the result at least it hasn't gotten worse.

Finally spring arrived and we had sunshine and Ilona and I celebrated her birthday outside sitting outside. 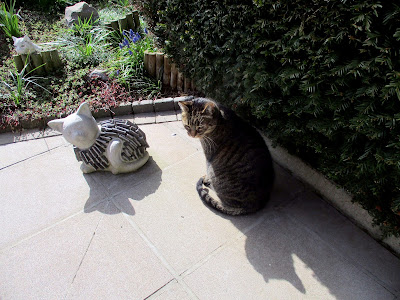 it was a wonderful day, and you could hear everywhere the lawn mowers !

On Sunday it became even better the temperature climbed up to 25°C (77 F) and made the warmest April day ever since 1902 ! 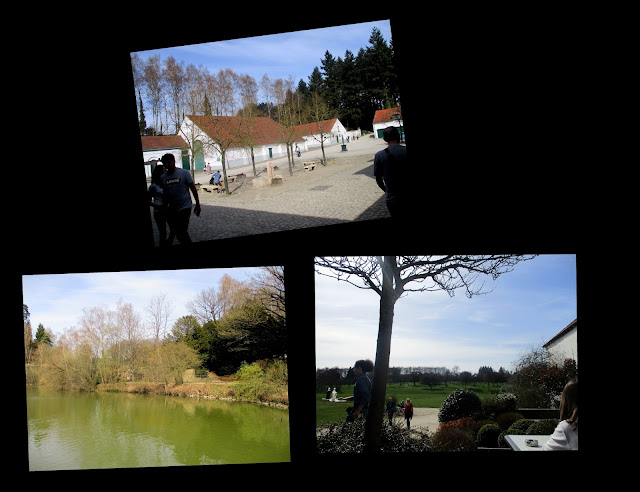 My friend Bunny who had the intention to do her paper work on this Sunday left everything when I called her and proposed a walk to the park of the Chateau de la Hulpe.

We walked along the lake and the orchards there were a lot of people who had the same idea as we had and had a drink on the terrace of the restaurant near the castle. Which of course was full and we had to wait a little until we got a table with two chairs. Since we know each other since we were teenagers there are always a lot of memories to dig out and we enjoyed the first real sunshine.

Mr. G. sunshine or not was glued on the TV screen to watch the Formular 1 and was happy that Ferrari won again which hadn't happened in the last years. I have to admit I couldn't care less. 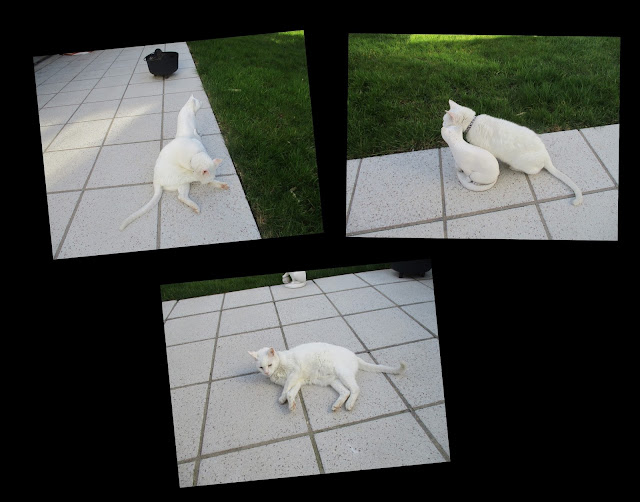 and could have purred in the sunshine like cat Arthur did.