For the moment for lunch I love to eat Gorgonzola on a freshly toasted thick slice of wholemeal bread and as desert two apples. Mr. G. usually cleans off the trays as we are eating in the living room while watching the News or a little crime story. This time was no exception and he put the cheese in the fridge as usual.

The next day I took my Gorgonzola out and put it on the tray.

But when I opened the package, I had a surprise

Instead of the cheese there were the rest of the apple cuttings, which I had put in the package and had closed it. You should have seen my face and then we both bursted out in laughter ! I took a new package and ate my cheese toast which tasted delicious !

1. After Aqua Gym while drinking our tea, we had an interesting discussion about diets. The best example was the Flemish politician Bart De Wever  the president of the New Flemish Alliance (N-VA), a Flemish party that strives for an independent Flanders. He is a terrible nationalist and almost fascist and we consider him as dangerous. But in a few months he managed to loose 60 kg  (132 lbs) with a protein diet.

Before the diet he looked like a personalised pig, now he could play in a horror movie.

We asked ourselves what happened to the skin, from an elephant he shrinked to a racing horse (which is an insult for the horse) but still did the skin shrink with the diet or did he have a surgery. Nobody believes that loosing such a lot of weight in such a short time will last ! Especially because he loves to eat as much as he loves to do the trouble maker.

2. I also started Yoga classes again and it was nice to see my classmates. Nicole joined in for the first time and loved it. It also was the day of the "open door" so we had a lot of spectators.

3. In the middle of the week I woke up and realized I had catched a cold. I caughed and felt lousy !
I hang around the whole day and didn't have the courage to do anything besides my blogging things. I wandered from Computer to TV and took my medicins against caugh and fever. The trouble with me is that when I have a cold, I have fever too.

4. We had the visit of a friend of Mr. G. who is only two years older than our son and whom we call our "adopted son".  He always visits us when he needs some help or support in love or buisiness questions. This time it was love, he had broken with his girlfriend and was in a terrible state. We tried our best to cheer him up and I tried my best to make him understand how women work ! Finally he left us after 4 h, feeling much better. Am I happy that I don't have lovesickness anymore, looking back it was quiet an exhausting time ! 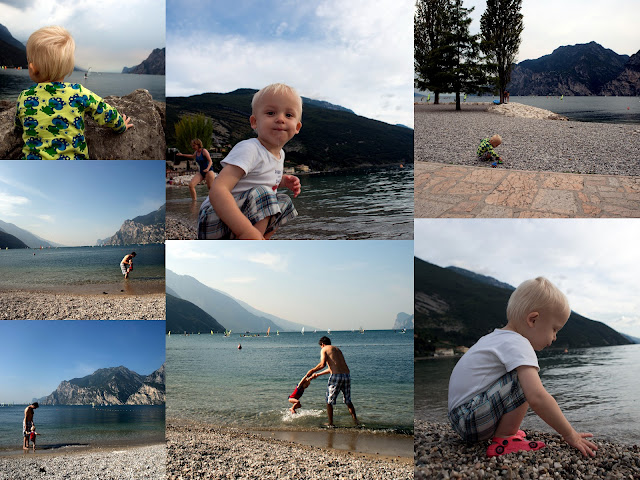 My son sent us some nice pictures of Toby when they were in Italy visiting Mr. G's sister and niece. They stayed at the Garda lake and when I saw the pictures it brought back so many nice memories. When our son was 2 years old, we also went with him for the first time to the Garda lake,  to present him to the Italian family. If we would have had cameras like today, I probably would have the same pictures because the landscape hasn't changed at all !  The people yes of course. There are so many Restaurants in Waterloo, that ill tongues pretend that there is one restaurant per family ! Maybe that's not quite true, but sure is you have the choice !

We even have an Irish Pub, very appreciated by young, but also by elderly people, mostly English once, as you really get the feeling to be in the UK. 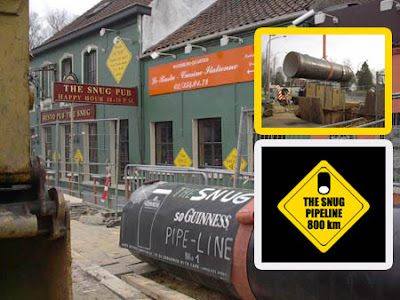 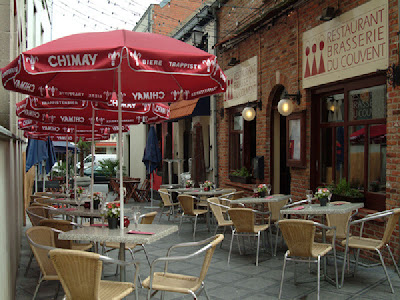 In a small street near the church, there are a few restaurants side by side and when it is warm enough people are sitting "on the street" and can have a drink or a little snack. Inside these restaurants are beautifully decorated. You can have French or Italian food in this little street.

A lot of very old houses or farms have been transformed to Restaurants, which is a very good idea. It keeps the ancient style of the building where nobody wants to live in anymore and at the same time keeps these listed buildings occupied. There are quiet a few in Waterloo. 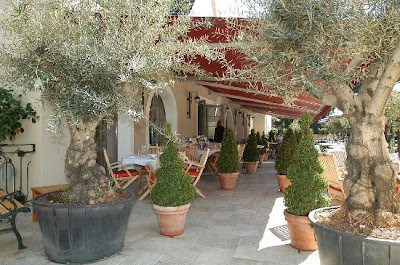 This restaurant serves Italian food especially Pizzas, its only 2 min from our house just in front of the forest surrounding Brussels. They have a huge garden and the food is very good. 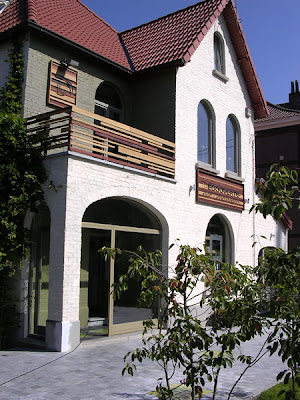 All these Restaurants have beautiful gardens were in summertime people eat outside of course. 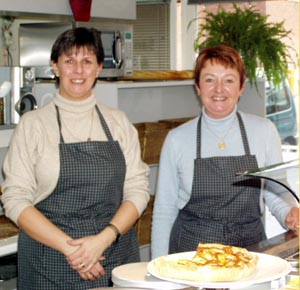 I wonder why in the English language chips are also called "French fries" ? Very much to the anger of all Belgians, because France has nothing to do with the "fries" they are not French at all, but are a Belgian invention. The Belgian journalist Jo Gérard has claimed that a family manuscript dated 1781 recounts that potatoes were deep-fried prior to 1680 in Belgium before they "moved" to France.

Of course hamburgers are not missing, besides the American Mc Donald's we have the Belgian group "Quick" very much appreciated by kids ! 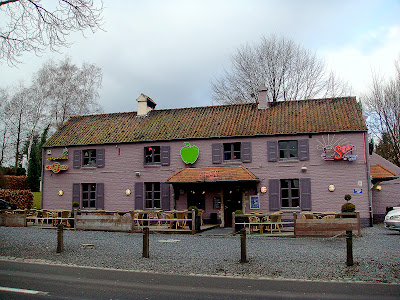 For the moment I like to have lunch with my friends in "La Pomme" (the apple) it also looks like a Pub inside and the food is very good. 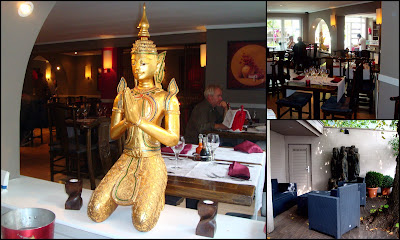 But more often we go to the "Jardin d'Asie" (the garden of Asia) which has excellent Thai food.

In Waterloo you can find every kind of Restaurants besides the classical Belgian and French, there are also Morrocan, Mexican, Japanese, Thai, Chinese, Italian, and Greek and I am sure that I forgot some. 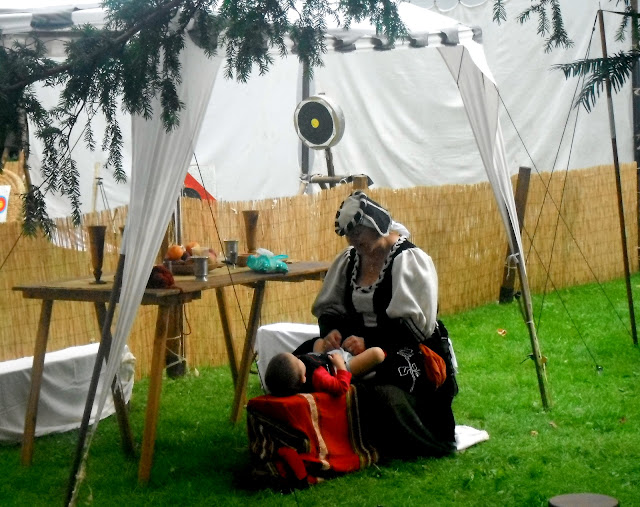 Helps you to remember what you have done on the weekend of September 15. If you participate please put the little logo on the top of your post and leave your link.

The weatherman had announced rainy and cool weather for the weekend and as usual was wrong ! The sun was shining as if payed for.

Therefore Nicole, I and dog Charly went to a Medivial Fest in Forest, one of the 19 muncipalities of Brussels.

There were lot of things to see, to eat and it was very crowded. 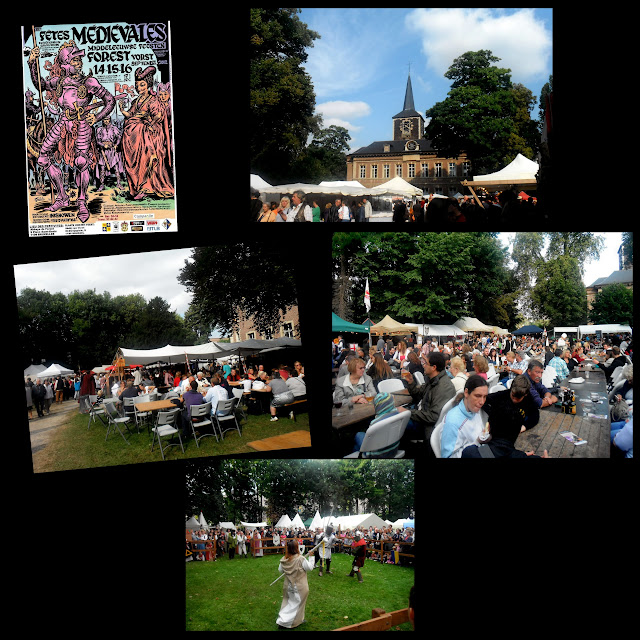 We stopped here for a drink, everybody was very cheerful and it was nice to talk to people you don't know ! 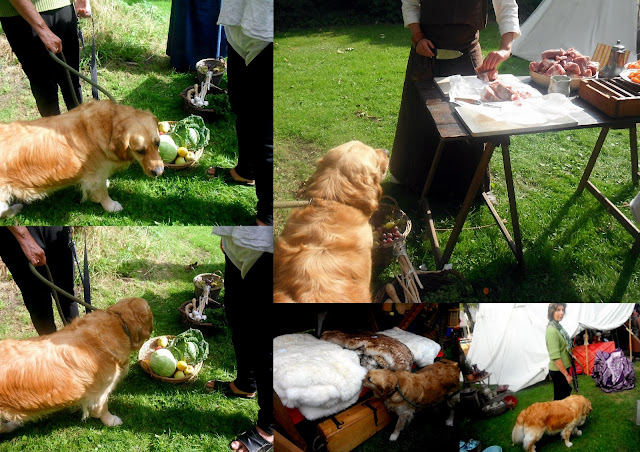 There was a stall preparing lamb chops, which was very interesting for Charly, he wasn't interested in the vegetables, but he liked very much the fur for sale in another stall and it was hard to convince him to leave the furs. It smelled so good ! 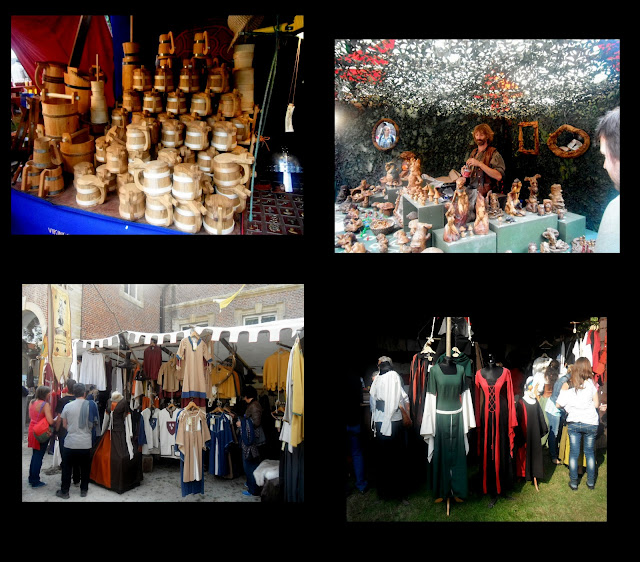 There were also lots of things for sale, I liked the wooden beer jugs ! We didn't buy anything, but it had been nice to see some of the shows too. After 3 hours, we had enough and returned home.

On Sunday again the sun honored the day ! It was really a sun day ! It was also the yearly Sunday without cars in Brussels. No car was allowed to drive except taxis everybody had to take public transport or one of his own invention but without motor. We didn't want to go, because we thought it will be a day like in Amsterdam where in any moment a cyclist runs you over. And indeed, there were thousands on the boulevards and streets in Brussels as I could see in the news.

Instead we went to a little old town in Wallonia named Ittre, where a local feast was going on the main theme was the protection of the environment. 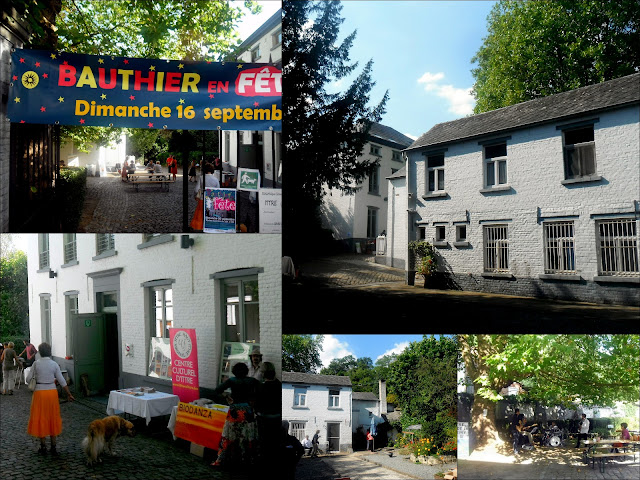 There was an orchestra, a lot of food and a library where you could get books for free. The buildings where surrounded by a beautful wood and park. 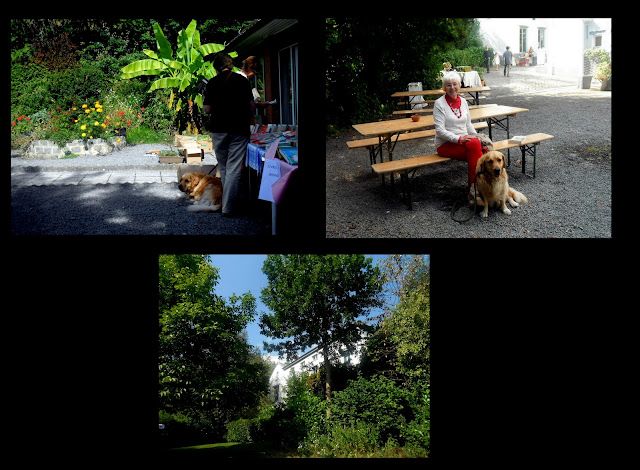 While Nicole studied nearly all the books and finally choose two, Charly and I sat in the sunshine and watched people. We listened a bit to the speech of a young lady, explaining the importance of saving our planet (not our souls) and she asked the following question : "what is warm and cold, nourrishs the whole world and nobody can eat it". The answer was easy when you knew it ! What could it be ? A young girl finally found the correct answer ... "the earth" ! She won the basket with the vegetables.


On the way back to the car we stopped at the theatre to pick up the program for this season. 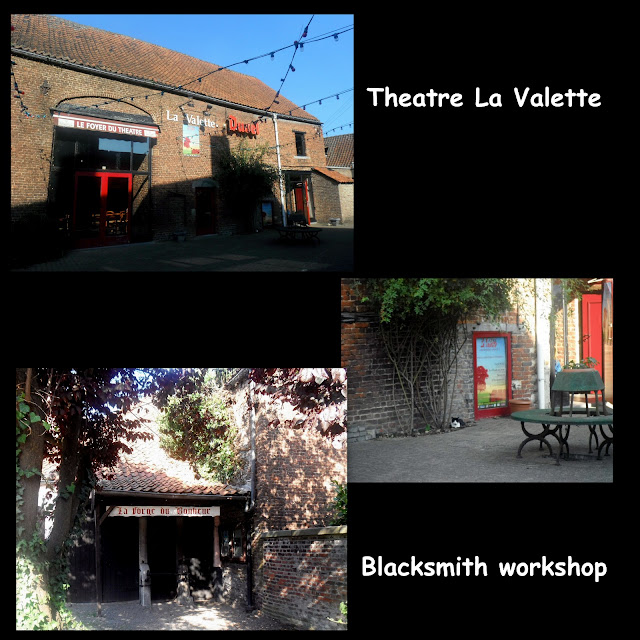 It's a quiet famous theatre with very good plays and the fact that there is also a restaurant where you can eat before the performance is also nice. It's easier to go there than to Brussels. It's also located in a very cute little street just besides the old blacksmith workshop. 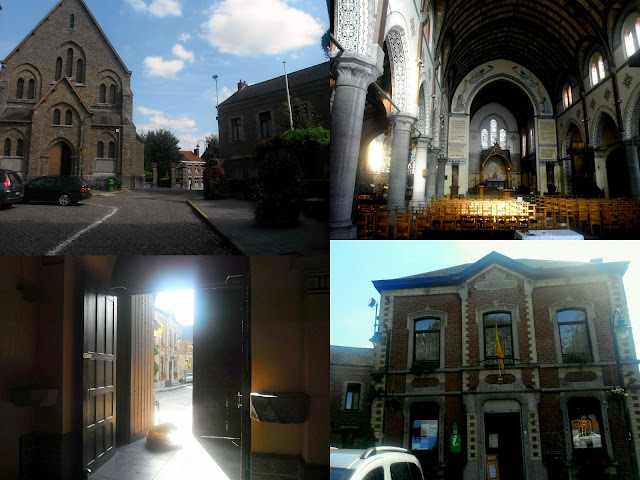 We also went to have a look into the church, which was quiet pretty inside. Charly had to wait outside, but it was too warm  so he moved inside the entrance. But when we turned around a corner he didn't see us anymore and started to bark. It made a terrible noise in this peaceful and silent church, so that we ran to take him out ! Fortunately there was nobody around. Anyway dogs are also God's creatures, and who knows if Charly's barking was not a prayer !

Before I went home we had a cup of coffee on Nicole's deck and I thought maybe this will be the last time we are able to sit outside.
Posted by Gattina at 06:00 5 comments:

Labels: Forest, Ittre, medieval festival, What did you do this Weekend

INSULTED BY A PARROT

Last week I noticed that I was almost at the end of my cat food stock. Before it turned to a drama and always hungry Arthur would kill me, I went to the pet shop where I always buy the food. 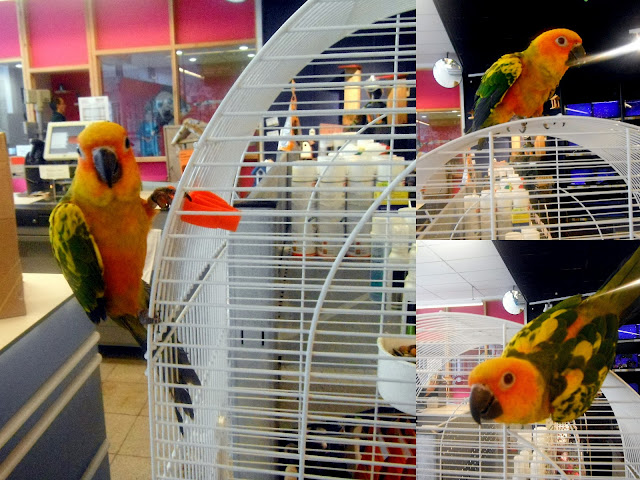 At the entrance I was greated by a very colorful parrot. "Bonjour" he said and gave me a suspicious look. I was pleasantly surprised approached the cage and pulled out my camera. When he saw that I was taking something out of my bag, he said "Give me a cookie" ! A parrot who talked I was delighted and while I pointed my camera towards him, I said, "no, I don't have cookies". "Naughty girl" he said, "Dammit woman" (how did he know that I was a woman ?) I took pictures. Apparently he didn't like that because he started yelling a long list of very bad words ! The cashier turned around and told him "shut up", without success.

I don't know all these French words he shouted at me in English, of course this kind of vocabulary you don't learn in your English lessons and my blog also would be censured. It was really very instructive ! I have never heard such a long list of bad words. The whole shop gathered around the cage and we laughed all together. The cashier excused the bird and said he didn't know who had teached him this kind of vocabulary !

When the parrot had finished he said "I go beddybies" climbed in his cag sat on one of the swings and looked angrily at us.

I did my shopping and when I had payed and wanted to leave the shop, the parrot screamed behind me "Go home old goat" !

Well, don't complain about your kids, parrots are worse !
Posted by Gattina at 06:00 4 comments: