1. A rather morose week lays behind me. It's still cold, grey and rainy, which takes us all energy and we have no force to do anything. Finally Nicole and I met in the Lunch Garden for a drink to see other walls than ours and talk to other people. Charlie the dog is such a charmer, everybody stops to admire him and then the conversations starts.

2. Easter holidays are still going on, so no aqua gym and painting courses ! There shouldn't be school holidays for vintage people ! Of course some of them are on grandma duties, which is in my group of friends not the case, their grandchildren are grown up and mine lives too far away and hasn't spent holidays alone with grandma and pa yet. If that will ever happen.

I finally could print out my flight ticket to the South of France, fortunately my flight is not from Brussels main airport which is still closed due to the heavy damages of the terrorist attacks, but I will fly from Brussels South. Some warm weather and sunshine will certainly do me good !

3. When I opened the shutters yesterday, I saw that something was going on just across the street. 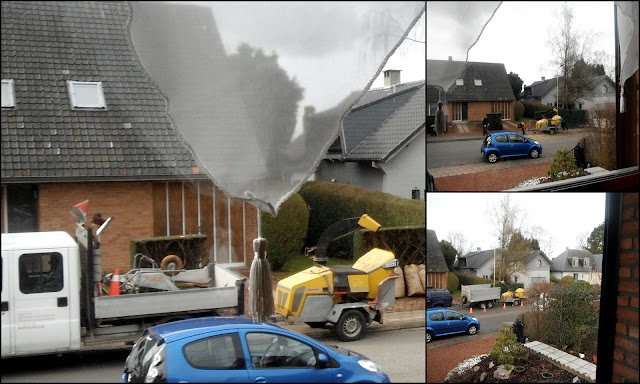 There were several workers carrying branches and put them in this yellow machine and sawdust was blown in the truck. It was quite noisy and had certainly woken me up ! 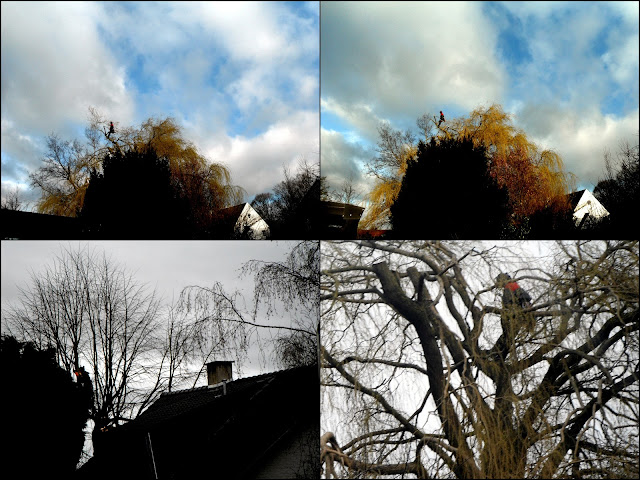 Then I saw a man on the tree across the street, and another on the weeping willow in our neighbor's backyard. They had done it together to get a cheaper price. I thought my neigbor would have cut the whole tree, but not at all, he just had let it shorten a bit, I see no difference ! Fortunately in case of storm it will fall on his house and not on ours.

4. My friend Chantal and I had invited Ilona for a lunch in "our" Chinese restaurant, to celebrate her birthday. It was real nice and the food as usual excellent. After lunch we really were not up to go home, so we went to the Brasserie "l'Orangerie" behind the farm which used to be the hospital for wounded soldiers during Wellington times at the battle of Waterloo. 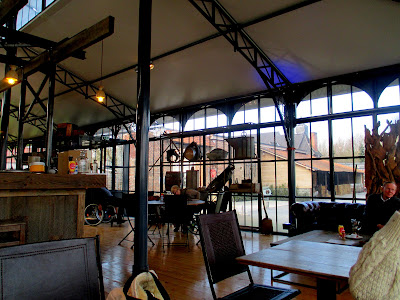 And as there is always something to chat, we stayed there for nearly two hours. Chantal lost her car keys and we had to go back and look after them, finally the waiter found them under the cushion of the leather sofa.

5. I checked my summer clothes, I have forgotten what I have, because this weekend I have to see what I will take with me to France. The afternoon I spent with Nicole explaining some computer stuff, 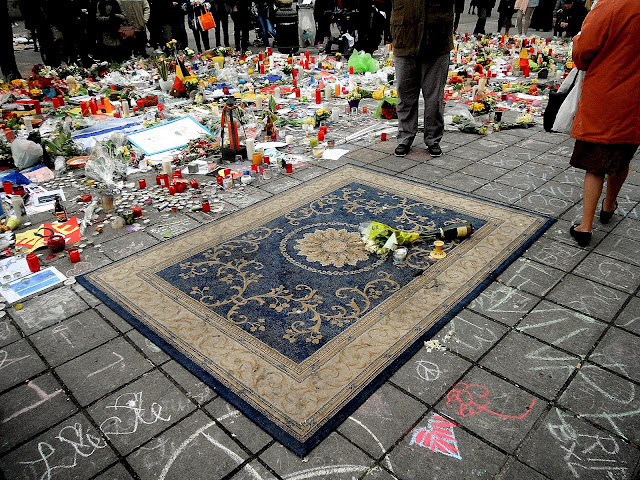 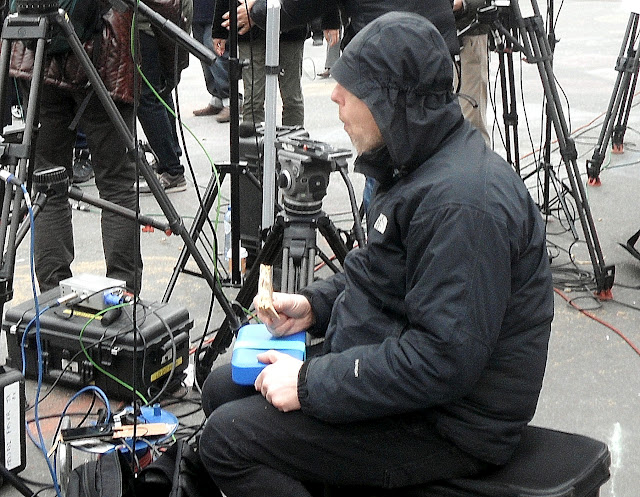 Memorial to honor the victims of Brussels' terrorist attack

After the attacks on a Brussels metro station and the airport on March 22, on the "Place de la Bourse" in Brussels' center, people paid tribute at a makeshift memorial for victims just underneath "La Bourse" (ancient stock market, now museum)

As I was already in Brussels, I wanted to see the place with my own eyes and went there. 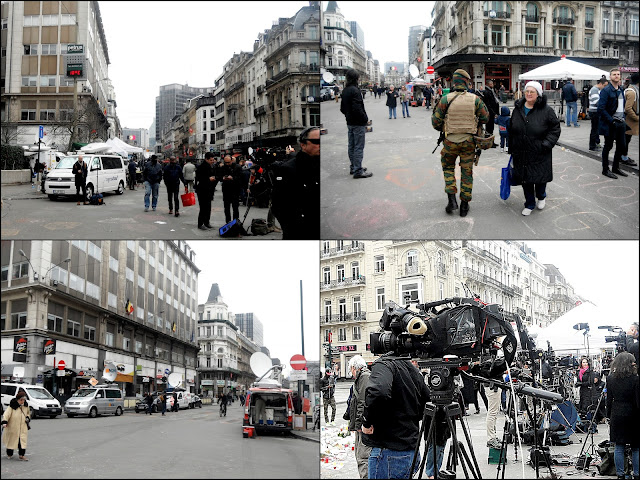 Journalists from all over the world were there. I only saw one heavy armed soldier. 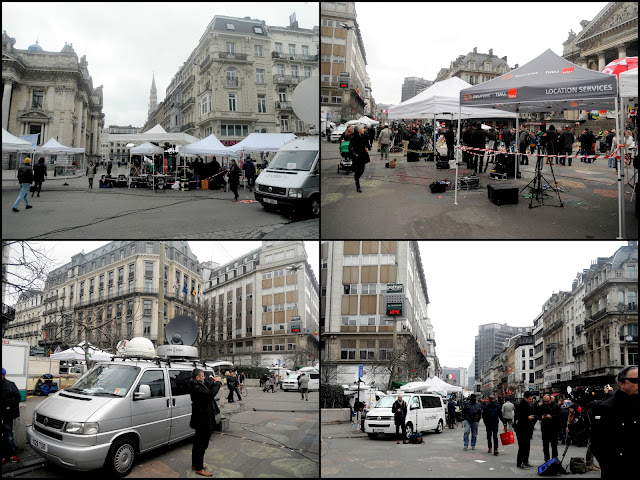 In these white, open tents, they had installed their different devices. 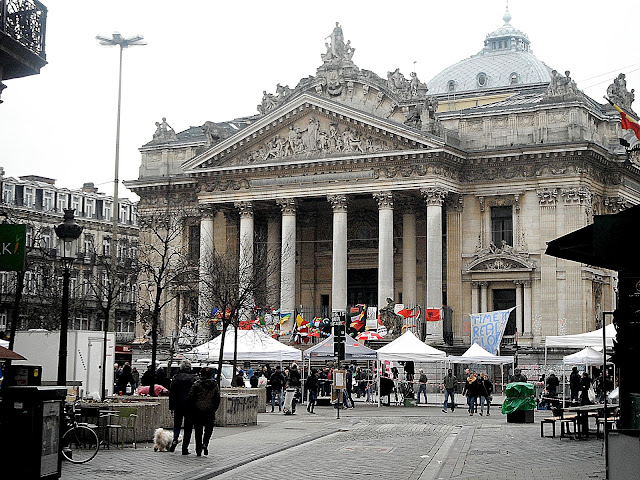 and then I saw "La Bourse" itself. 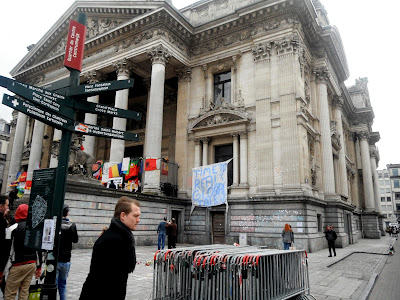 There were many posters hanging at the entrance 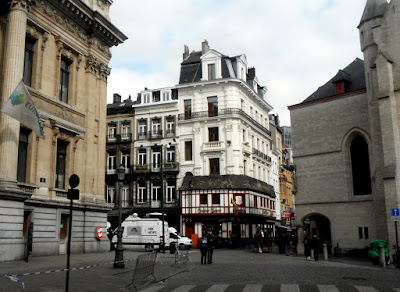 and all around on the walls inscriptions. 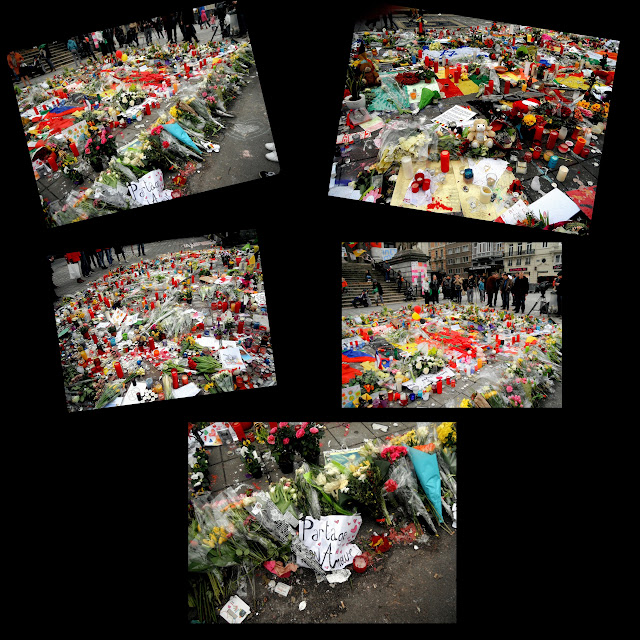 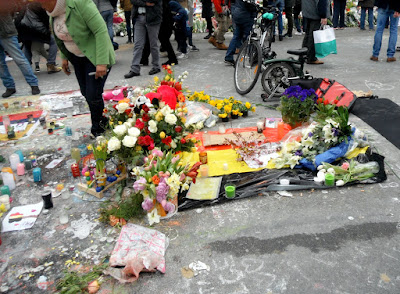 An ocean of flowers 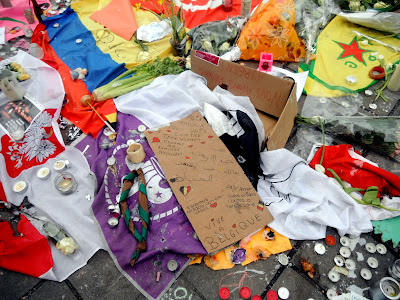 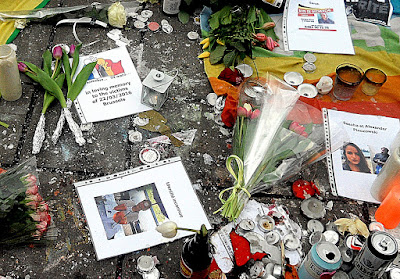 photos of disappeared people and even empty beer cans as sign of the Belgians love for beer. 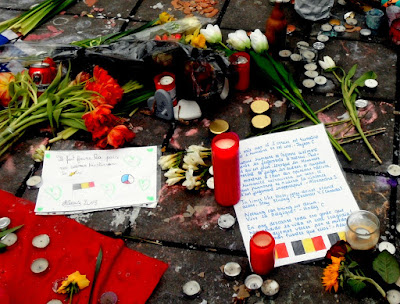 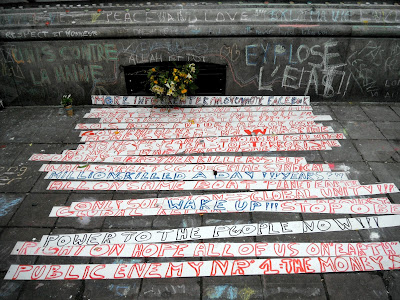 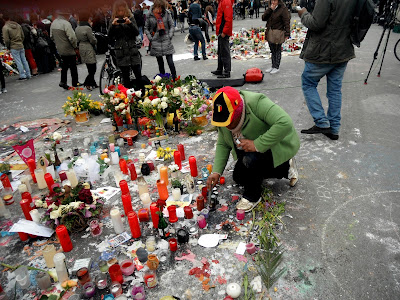 A lady lightening a candle 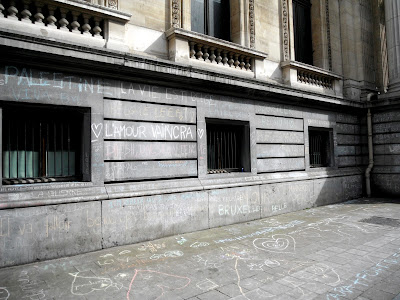 chalk texts and designs on the sidewalk and the walls 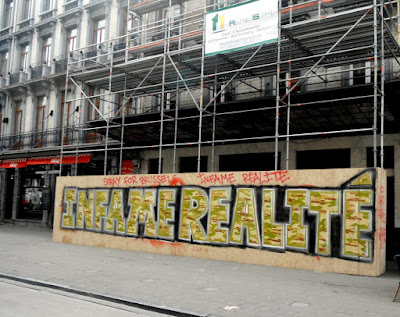 "Spray for Brussels" there were a lot of English texts 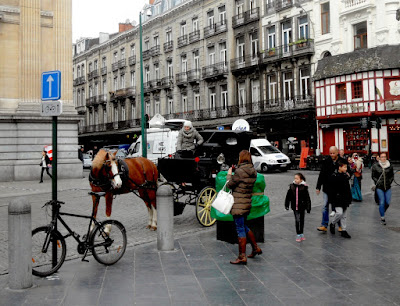 and the people who were hoping for the return of normal life and get some work to do !

It was a very emotional atmosphere.

For the tourist sector this terrible attacks are a catastrophe. Their income dropped about 80 %. Hopefully it will get back to normal soon.

Four days after the terrorist attack, Brussels tried to get back to normal life and the traffic was much better. I had to go to the Anderlecht market, also a municipality involved in searches, to buy cigarettes for Mr. G. and I also wanted to find new spring feathers for me to cheer me up.

On my way towards Brussels, suddenly I saw firemen trucks and lots of police cars from far. 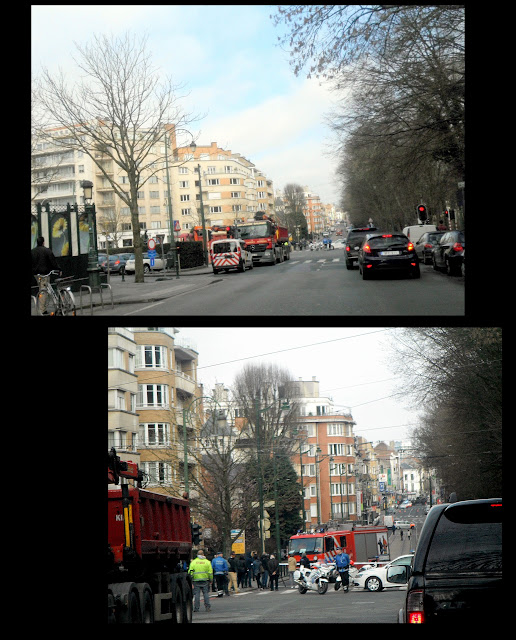 I thought that's really no chance I have to turn and drive back home. A suspicious parcel had been found and the whole area was blocked. Fortunately I could take another way and without further problems I safely arrived at the market. 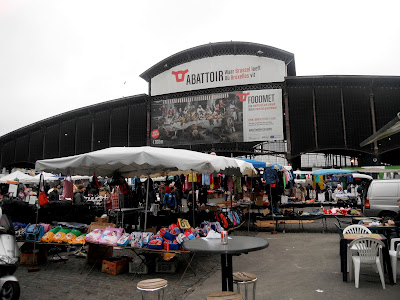 There everything was normal. Lots of people as usual and all stalls. It was really nice to walk around on this market with a majority of Muslims. Everybody was so friendly and we chatted together about the last events and everybody was shocked.

And as I was already in Brussels, and "La Bourse" where people had left flowers, candles, peace notes, etc was not very far, I thought I have to go there and also pay my tribute to the victims. 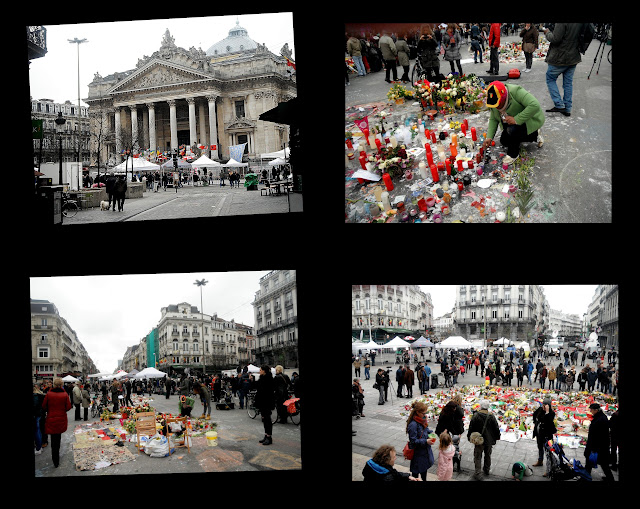 The place looked very impressive. Much more than when I had seen it on TV. There were all TV channels from Europe and abroad under these white tents and journalists and cameramen where waiting for I don't know what. It was around noon, so there were not so many people. I walked around, read the messages, lots of them in English, but also other languages and took pictures. I would have loved to light a candle, but there were none to buy. So I returned home.

Sunday was quite sunny, but so windy that it was impossible to go for a walk. Instead Ilona and I went to an international Cat show close to where she lives. We had a great time, speaking with the owners and talking to the cats. They were all very relaxed and real cool. The one who won was an American cat, I had never seen such a breed (right bottom) he was huge, like a baby tiger and had a fur like a sheep. He was sitting on a chair, was not even in a cage and sniffed at people and a glass of beer ! We all laughed. Apparently he lives outside and it was so warm that his owner had a ventilator with her. I had never seen so many different cat breeds in my whole life !