1. After aqua gym Dominique and I went to the new store which really sells everything to surprising cheap prices. 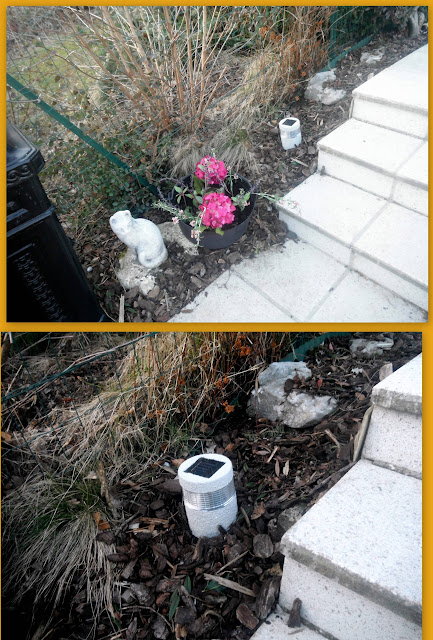 After that, we went to our little Greek restaurant and had a nice Pita !

2. The next day I had to go back to the store, because one of the lamps didn't work and I had to change it 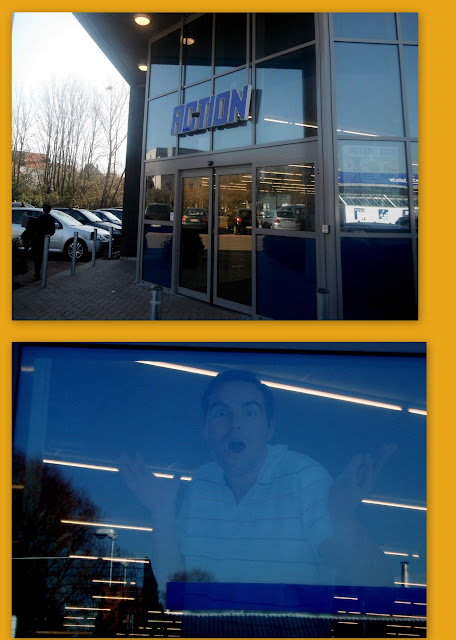 When I parked my car, I was with my thoughts I don't know where, and suddenly saw a man in front of me ! I jumped on my brakes to stop the car, when I realized that the guy was only an advertising ! I exchanged my lamp and of course came out with other things which I suddenly needed !

For the first time this year I could sit outside and enjoy the sun together with Nicole and dog Charlie. What a feeling ! I had come over to help her 86 year old neighbor to connect to Internet, she had bought a laptop and had Wifi installed, but she didn't know anything about a computer ! I finally managed to connect her computer to Internet and she was very happy. She had realized that even at her age it's never too late to learn something, especially for making her payments. She has no car and the bank is far away.  First thing now she has to learn is making her payments "online". Nicole is sharing the Internet with her, so we went to her flat and I connected the Internet on her computer too. First it didn't work, although the connection was done and then we realized that the walls were so thick, that it didn't go through. We changed the place and it worked ! I was rather proud of myself I have to admit, because it was the first time I had helped out for an Internet connection. 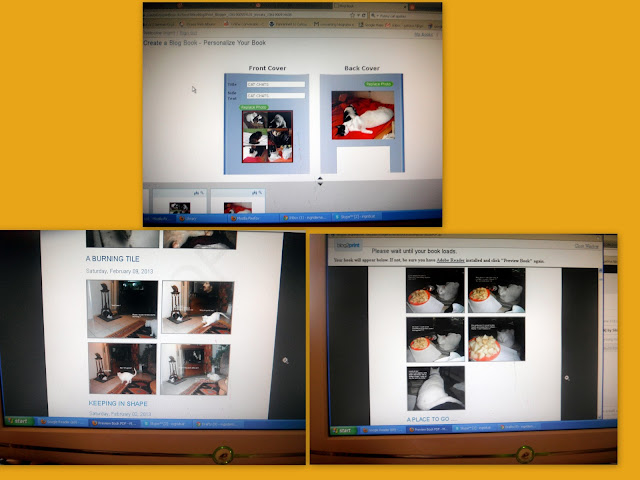 In my free time I work on a book, called "Cat Chats". It's almost finished I had downloaded all the posts I wanted to be published, with the help of "SharedBook". There are still some corrections to do with the layout. But it already looks quiet nice.

Since last year I was dreaming of a lawn mower robot ! It became more and more hard for me to mow the lawn, although it's a rather small piece. But still carrying around the heavy machine and pushing it left me quiet exhausted. So when I heard that the Garden shop was closing down and I could get a cheaper price, I ran to the shop after my painting class and bought the last one, apparently other people had the same idea !! Was I happy ! It's not heavy at all, and doesn't need a special installation. All I have to do is charging the battery put the thing on the grass push a button and off it goes. Of course I couldn't try it out yet, because after our "spring" break with sunshine and warm temperatures, snow and frost is announced for the weekend !  But at least I have my toy !
Posted by Gattina at 06:00 16 comments:

In 1995 my son finished his studies as a professional photographer and  went to London to start to work with a very famous English photographer. At the same time the Eurostar started to run and I could be in London within 3 1/2 h. Today it only takes 2 h from Brussels to London.

At that time I was really very much involved in painting and still went to Art school. I never thought about photographing !

In 1996 I discovered the London Pubs ! They were a paradise for drawing people ! 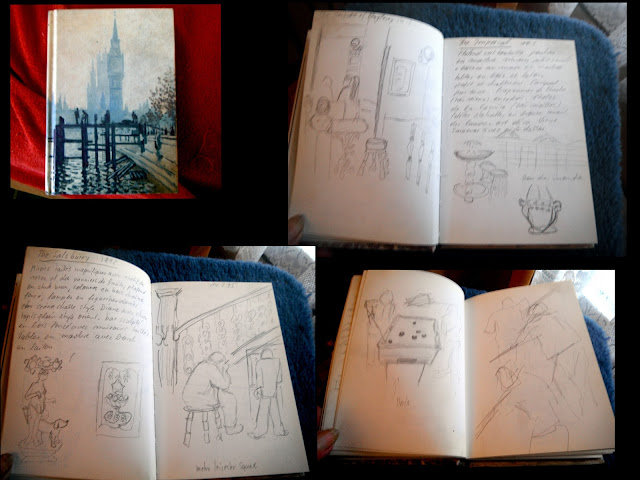 I bought myself a little sketch book and started visiting Pubs in London . I discovered over the years around 60 pubs ! I used to sit down in a corner, ordered a glass of cider, which I loved and draw the people. Nobody bothered me, it was real nice. Besides my drawings I described the Pub, because I had no camera at that time. 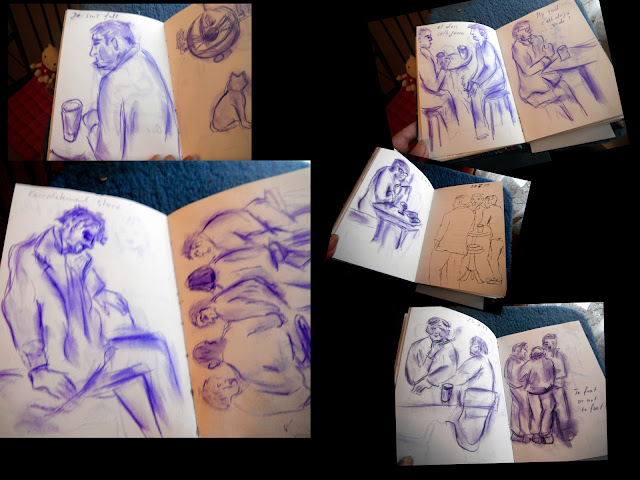 17 years ago, the Pubs were quiet different. There were no seats outside and I don't remember that any food was served. But there I may be wrong. People of all social classes went there having a drink or more and it was always a very cheerful and sometimes very animated ambiance, when it came to political or football (soccer) concerning discussions ! 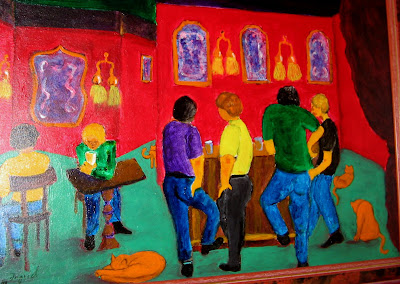 When I returned home I did some Pub paintings. Here is one which is still hanging in my kitchen.

Now nearly 18 years later, I was very disappointed when I visited Pubs again. They had changed, lots of them had disappeared because of the anti smoking law. It was a pity ! After the anti smoking law came out and it wasn't allowed to smoke in Pubs anymore, at the beginning they really smelled bad of cold smoke. Hundreds of years sometimes, people had smoked there and this smell was remaining in the wallpaper, decorations etc. Employees still go into their Pubs on Friday nights to have a drink together, that hasn't changed. But lots of Pubs have become restaurants, or just don't exist anymore.

I had never thought that I would be able to find some pictures of some Pubs I had visited for my drawings. Meanwhile I had learned to use Internet and own a computer. I felt quiet nostalgic ! 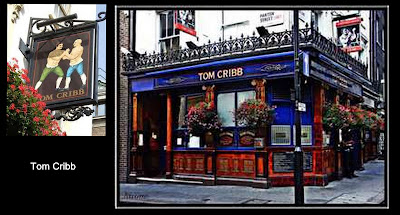 There was this one which dated from 1808, in honor of the Boxeur Tom Cribb born in 1781 ! He was a bare-knuckle boxer. He was so successful that he became world champion and became a member of the International Boxing Hall of Fame. The whole Pub was full of drawings of his boxing matches. 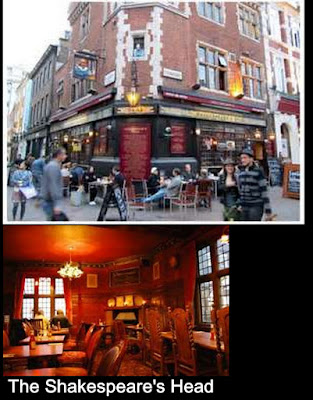 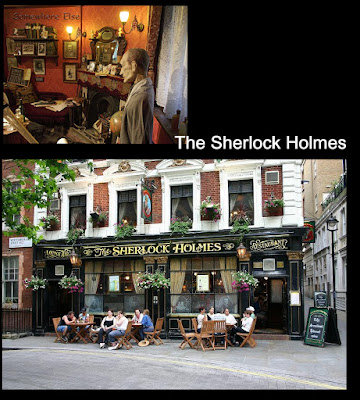 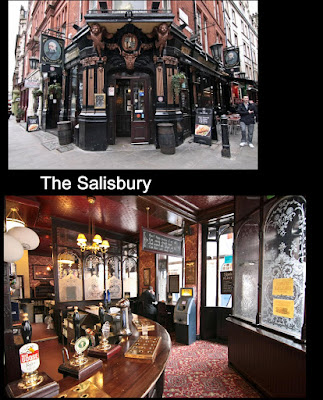 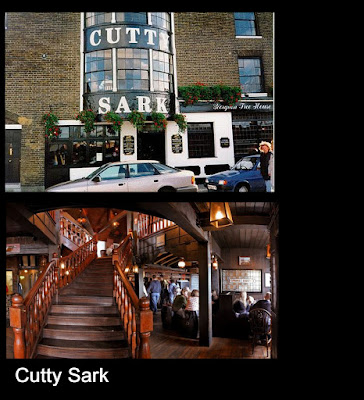 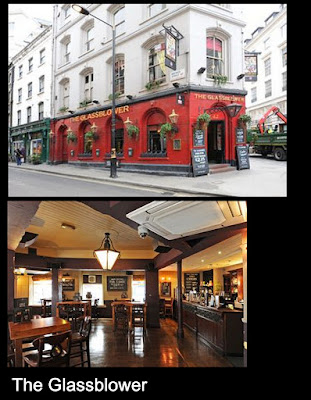 I looked into my little drawing book and wrote down all the once I had also visited and I wonder if they are still existing !  The Woodstock, The Marlborough Head, The Swan, near Christal Palace, The Handsell, Le Bonaparte, the Dulwich woodhouse, The Scrumpy Jack, The wild Celt, Kings Arms, Half way to heaven, The white horse, The chardons, the Prince of Wales, and The blue Post, 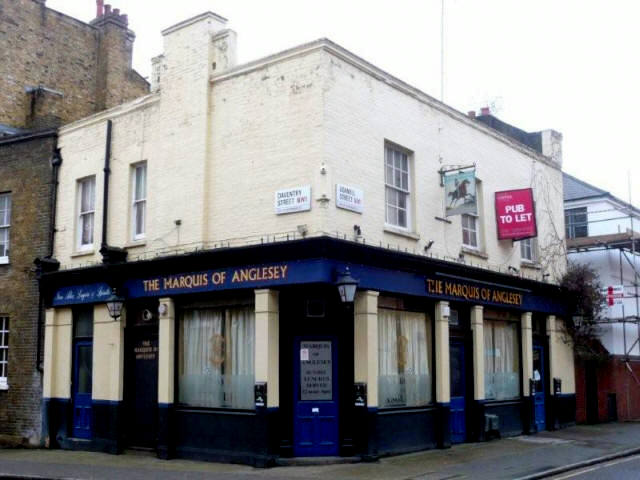 And why ? Because smoking is not allowed anymore. I agree that it is not nice to smoke where people eat, but I absolutely don't agree when people only have a drink together.  After all, those who don't like the smell, just should stay home. There is a part of British traditions which disappear ! A Pub (abbreviation for "Public House"), is  "open to the public", as opposed to a private house, and is a drinking establishment fundamental to the culture of Britain. After all the history of pubs can be traced back to Roman taverns!

The history of "Pubs" you can read here

A WALK THROUGH THE WATERLOO MARKET

For the first time since weeks I could go for a walk on the Waterloo market which takes place each Sunday morning. The sky was still grey but it wasn't cold and it didn't rain or snowed. So most of the stalls were present.

There were quiet a lot of people and even furniture on display. 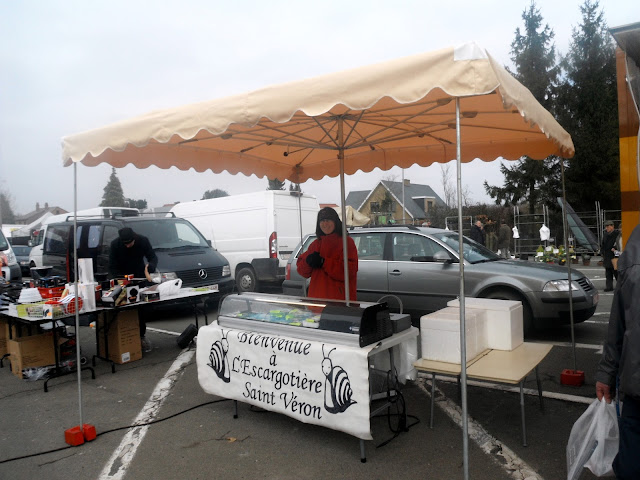 Lots of people love eating snails so there were two stalls. This one for take away and 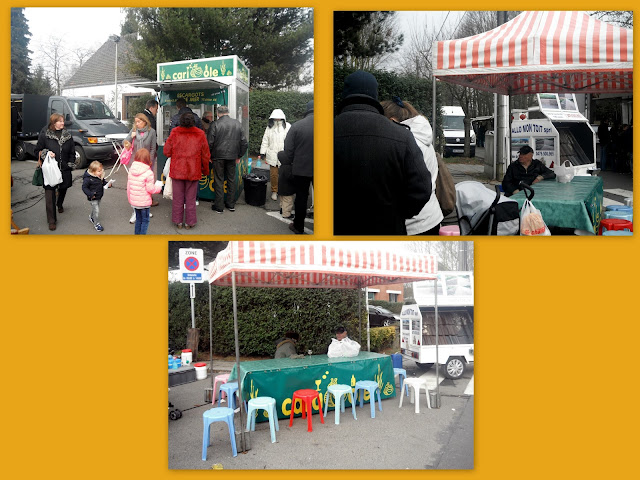 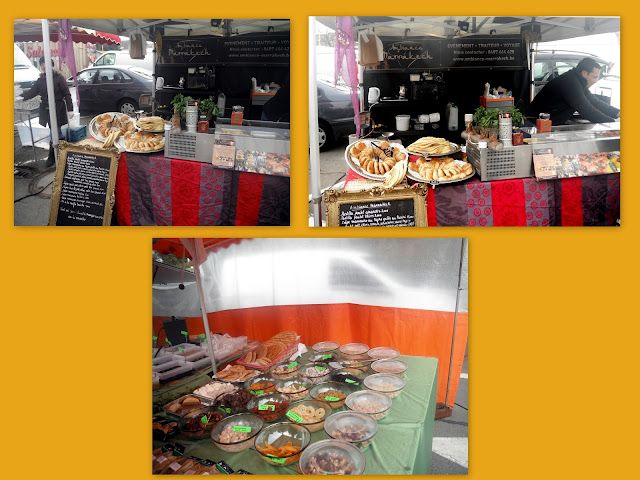 Moroccan and Turkish take away were present too

The classical Sunday meal is a roasted chicken. Lots of people buy it already roasted and take it home, it's delicious.

Several cheese stalls were there too 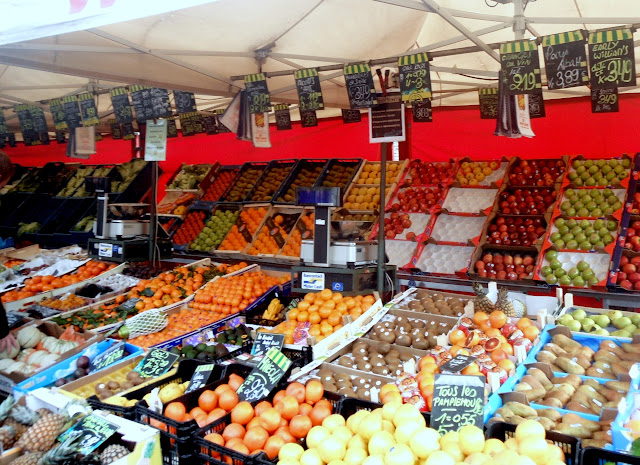 and of course a big variety of vegetables and fruits. 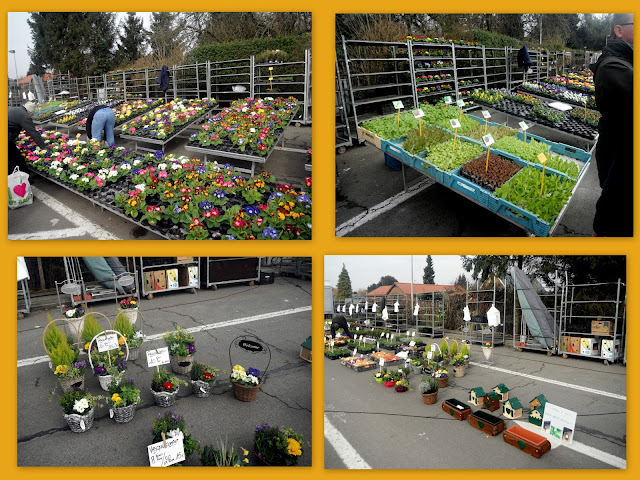 Artichokes, and mimosas from the French Provence, the symbol of women (as it was written on the sign) 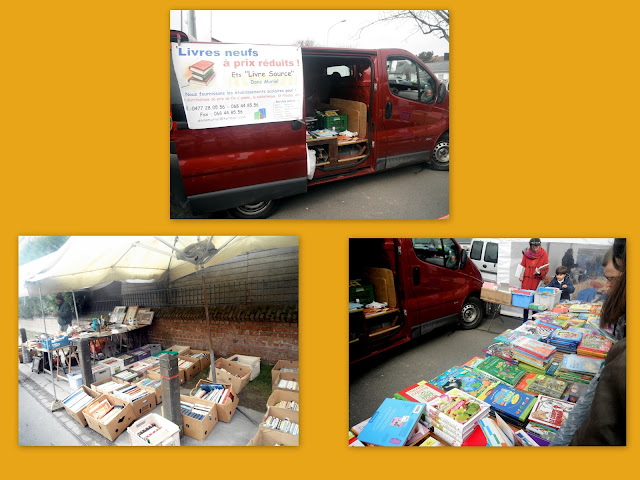 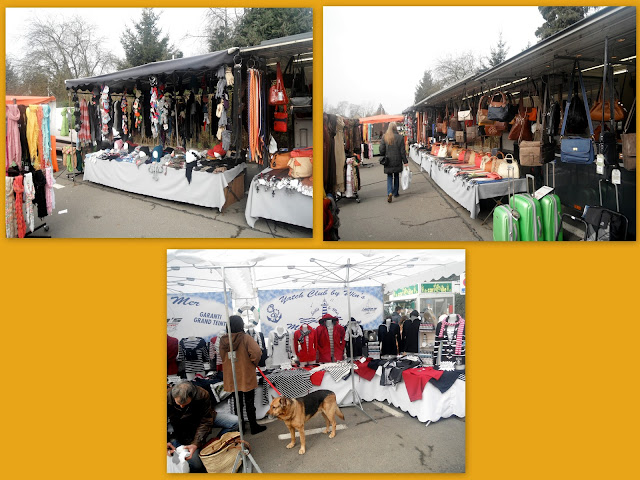 I ended my walk with looking at bonnets, scarfs, suitcases, handbags and clothes.
Posted by Gattina at 06:00 16 comments:

Helps you to remember what you have done on the weekend of March 3. If you participate please put the little logo on the top of your post and leave your link.


I did some shopping for my painting class, bought brushes and colors and as this store has a lot of other things too, I finally came out with some cosmetic stuff and a mug and a little bowl with "cars" on it for grandson Toby.

In the afternoon we had the visit of our young friend (he  is only 2 years older then our son) I always say that he is my "adoptive" son, he helps me out when I have a problem and I help him out when he has a problem especially with girlfriends. So both of us have the view of two generations. That's really nice. Mr. G. met him at least 8 years ago when they both took English classes.

In the evening I went with Dominique and Nicole to the theatre in the little old town not far from Waterloo. I love this place because the theatre is in an old barn belonging to a farm, which has been transformed to a restaurant. 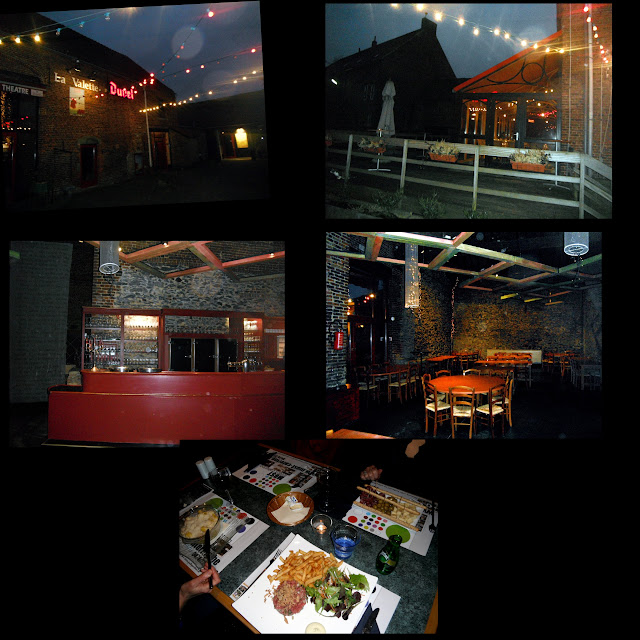 Before the play we had a nice light supper, I always take a steak tartare with chips and salad, because it's really very good there. 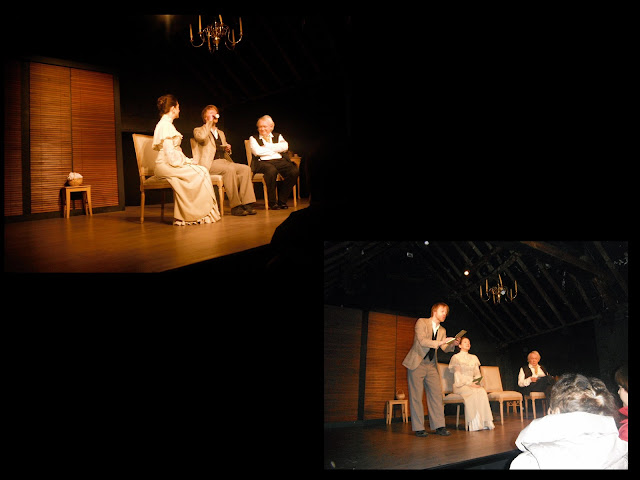 The play was a comedy "The parasite" and really very funny. We laughed a lot ! It was the story of a young man who tried to charm an elderly couple, who then payed everything for him and he tried to conquer the wife but he did it in such a discrete way, which made the play so funny. The husband didn't realize anything and payed for everything the young man wanted.

Despite the bad weather forecast it should be cold, grey and cloudy, the sun came out and I was happy that once again the weatherman was wrong !

As I drink quiet a lot of coffee or tea when I am sitting behind my computer, the mug becomes quickly cold because I forget to drink while I am typing. 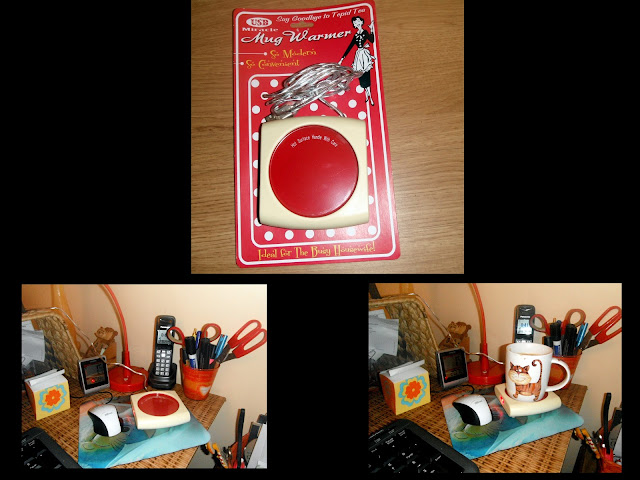 I found the solution in the small cabinet where I keep gifts I buy during the year, and I found a mug warmer which you can connect with an USB key to your computer. That's great, now my coffee stays warm, I only regret that I didn't think of it earlier to use it for myself !

It had had been a long time I wasn't on the Waterloo market, due to the bad weather. Most of the stalls  hadn't been there either. 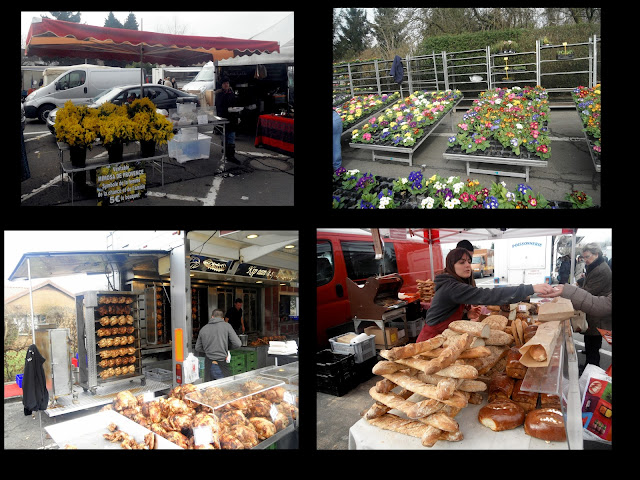 To do a little walk I went there and was happy to see the first flowers for the gardens ! The roasted chickens smelled wonderful and the freshly baked bread looked very appetizing. 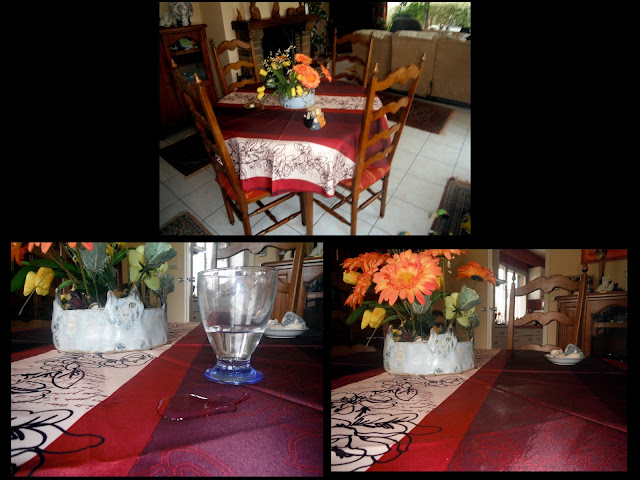 I also bought a new round table cloth. These are real practical once. They look like a normal fabric table close but they aren't. They are like plastic table clothes, that means you can spill wine or coffee on them but it doesn't sink in. (see the water). You just have to take a sponge and clean it up. That's very practical especially when you have guests because red wine stains are difficult to wash out.

When I came home, I missed my mobile ! So I rang my number and listened in the whole house, but I couldn't hear any ringing. Suddenly somebody answered, I was so surprised that I looked at the phone as if I could see the person who had answered ! It was Mr. G. "What are you doing with my phone" ? I asked when I recognized his voice. It turned out that I had lost my mobile on the market, a man had found it, called the last number which was Mr. G's and asked him to come to a café near the church to pick it up !
Was I lucky ! It must have fallen out of my purse.
Posted by Gattina at 06:00 7 comments: