During the whole week I did my market study to find a new Madame GPS, as I want to divorce from the old one and find a younger model. (Equality for women !) Since she had conducted me amongst cows, to the wrong airport and other strange places, I lost all confidence and decided to buy a new one, and for that my forthcoming birthday was ideal !

Mr. G. and son D. got the instruction to share the costs for a new Madame GPS for me. Finally I found one which fulfils all my wishes, and also a shop where it was 30 € cheaper !

Today I went to the shop to buy my new GPS. When the shopowner saw me entering his shop, he made a face as if he couldn't believe that such a grandma dared to enter his kingdom.

A women my age is not supposed to know anything about computers or internet or anything close to it. In some way he is right, because amongst my friends only very few use internet and don't really know what a computer is, except that it bites.

He took the GPS from the shelf, put it on the cash desk and ask me to pay. I told him that first I had a few questions concerning map updates with the computer. He rolled his eyes invisibly to the ceiling, probably expecting a lot of stupid questions. But when I started to speak and told him what I had done so far googling through the net to get all informations about all Garmin GPSs, his eyes almost popped out of his head. To some questions he didn't even know the answers and I had to explain them to him. As he only knew the things in French, but Garmin is in English and the French translation rather bad, he quickly realized that I don't have to be in my 30th to have some know how and that there are also exceptions in grandmas. I think for Grandpas he would have accepted these facts more easily.

Finally he was so startled that his whole world collapsed because apparently women are not that stupid as he thought. Now he didn't want to let me go ! When I arrived he was in a hurry to get rid of me, now it was the opposite. He even asked me questions ! Of course from computers itself I don't know anything or very little, but when it comes to Internet and everything which comes with it, I can hold the position.

At the end he offered his services if ever I had a problem with my GPS and even held the door open so a could walk out (head up !) !

Now I have to wait until July 8th to become a proud owner of my new Madame GPS, and I hope that she will be a responsible adult and not a teenager in puberty who sends me amongst the cows again !

1. The week started rather sad, I had the blues I was still half in Istanbul ! I wasn't the only one, my friend Dominique too. That's what we told each other with a cup of coffee over the hedge. Fortunately we had our acqua gym and afterwards 4 of us had lunch together and talked about our holidays, one had been in Sicily and the other at the French Riviera.

2. We also had to sort out our bills, Dominique had payed the total of what we had spent in the hotel in Istanbul and in the heat of 30 ° (86 F) without a breeze, under our Pergola, we did our accounting drinking the fresh cold apple tea from Turkey. I had bought a little more than 1 kg (2.2 lbs) ! It has a completely other taste than the apple tea I get here from Lipton's or other brand marks.

3. I went food hunting, the fridge was nearly empty although Mr. G. had bought cheese and fruits. The rest of the day I was busy with sorting out my about 1000 pictures !

4. After the hottest day ever in Belgium at this time of the year 38°C (100 F) still without the slightest breeze, I was locked inside and tried not to melt. I continued with my photos. During the night we had a heavy thunderstorm with hail which caused damages in some regions and also some flooding. Fortunately we had nothing, our house sits on a hill !

5. After a market study in the morning about a new GPS on both Internet and shops in Waterloo, I think I found one which would suit me for my purposes and so I know what to ask for my birthday ! The afternoon I went with Dominique to our neighbor friend Vivi to report our trip adventures in Istanbul and also to bring her this beautiful hand painted bowl.

Now I regret that I didn't buy one for myself ! She updated us of all "News" in the neighborhood, and we were so busy with chatting that we didn't realize that the time was flying by until Mr. G. called me on my mobile to tell me that supper was ready !! We had to laugh that we hadn't looked on the big clock standing on a sideboard which rang all 15 min the "Big Ben" music and that it was already 7 pm !
Posted by Gattina at 06:00 16 comments:

In our hotel in Istanbul was a balance to weigh the suitcases probably before departure with a plane, to see if one hasn't bought too many souvenirs or leather clothes, which are very cheap in Turkey.

As it was just in front of the lift and sometimes I had to wait, I thought with all the good food I had eaten I will just take myself for a suitcase and see if I had gained too many kgs for the flight back.

There was an elderly couple and the women seeing me did the same. Unfortunately for her the balance was in kgs and not in pounds as she was probably used too. Her husband made savant calculations to get the kilos into pounds. When I heard the result, I thought I am happy that I live on a continent where everybody is lighter, at least in numbers ! The woman was very unhappy with her pound result.

If my weight would be 70 kg which sounds already a lot but compared to 154 lbs, I would be a skinny minnie. That's why the whole world uses kgs only the Americans prefer to be fatter and calculate their pounds.

My conclusion, they don't bother to be fat, and prefer to be quicker and sweat less. 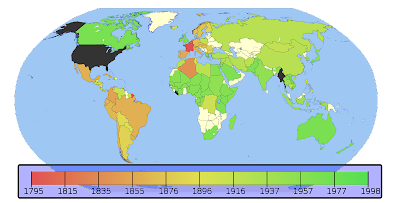 The black spots still use the pounds, inches, and F's. Interesting is, when it all started in 1795 !

Normally you mow your lawn, in Istanbul it was vacuumed.
Posted by Gattina at 06:00 11 comments:

MY WORLD - I discovered Istanbul

Helps you to remember what you have done on the weekend of June 25. You never know if you need an alibi ! If you participate please put the little logo on the top of your post and leave your link.

On Saturday we had to leave Istanbul and we payed our bill for the food and drinks and were happily surprised that it was much less as we had expected !

Our travel agency had told us that they would pick us up at 11 am.

As the suitcases were packed we decided to sit on the terrace and take a last look over Istanbul. Two Greek girls from Athens were fighting with an umbrella, and Dominique helped them, suddenly the umbrella fell on their heads and I only could see their legs. Unfortunately until I had my camera ready it was up again. What a laughter !

They then took this picture of us. Meanwhile the taxi arrived, we had to say good bye and were driven to the airport. Underway the driver told us that Istambul is even bigger than I thought, 140 km from one end to the other ! The petrol is very expensive there, 2 € for one liter ! And the streets are full of cars, and quiet new once.

The check in went smooth and very efficient, everything is very well organized and the airport is very beautiful. We had a little lunch there before boarding.

As our flight was with Turkish Airlines, the seats were turquoise too ! Very comfortable, much better than the planes I normally use.

Mr. G. was waiting for us at the airport and had prepared bought fresh Tortellinis filled with spinach and cheese.

Pookie sat with us at table a little disappointed that there was no meat. The cats behaved as if I hadn't been away.

On Sunday I unpacked, and Dominique came over to pick up her two birds which Mr. G had taken care of too. We both have the blues, so the rest of the day I sorted out my pictures and avoided to look out of the window, the sky is as grey as an old mouse !
Posted by Gattina at 06:00 8 comments:

Labels: What did you do this weekend ? Istanbul airport

I am tired and too lazy to write but I did Camera Critters Cats and dogs in Istanbul
Posted by Gattina at 06:00 3 comments: