The prompt for Stream of Consciousness Saturday is: “so/sow/sew.” Use one, use ’em all, use ’em any way you’d like. Bonus points if you start and end with any of them.

When I read the word "sow" I immediately had to think about my holidays with my grandparents when I was a child. They lived on the countryside in a little town, or big village and of course there were many farmers at that time. One of them once showed me a big sow, I had never seen before one that fat. He explained that the sow was expecting babies !! I was all excited and asked when that would happen, and so he promised me to tell my grandma when the piglets were born.

A few days later I was called and could admire a happy not so big anymore sow laying on one side with 10 or 12 little piglets stuck on her belly ! Were they cute with their little curly tails, I couldn't get enough of watching them. of course I was not allowed to take one out, because the sow could get very angry ! 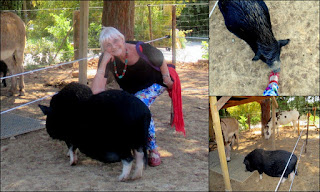 I have always loved pigs and I guess they loved me too. This one was very friendly, it was a little black sow which loved my shoes and followed me all around the place.

Sewing is another story, I once learned to sew in school, but once out of school I have never sewed again. It just wasn't for me.

1. During our holidays in Egypt we had played Scrabble nearly every evening, and we thought we could continue when we are back home. And now it's done we have created our little Scrabble club and will meet each Monday. We are five. Nicole had a flu and couldn't come and Mirella had to go to her accountant, so we were three and the tour started at my home. 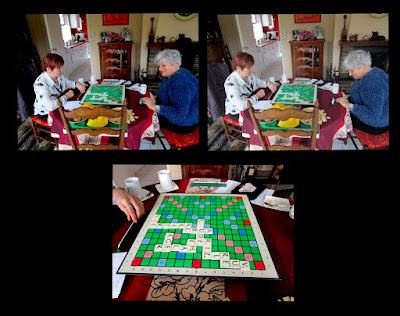 We had a lot of fun and made just one game. On the right is Mireille, she is half blind and brought a special Scrabble game with her with big letters. That suits everybody because otherwise they all need glasses. Mireille is also in my painting class and despite her handicap or maybe because, she makes wonderful paintings.

2. In the morning when I wanted to switch on my tablet it was dead. I tried everything, it didn't work, and it had been charging all night. So it wasn't the battery. When I arrived in the shop where I had bought it, the sales person tried some tests, without result and stated that the battery didn't charge anymore and that's why the tablet didn't work. I have it only since November ! I had to leave it there for 10 days ! Fortunately I still have my old Kindle tablet.

3. I had to go to the lung doctor for a check up, and as it was quite humid, it wasn't the ideal weather for me. When I did the tests I thought this time the result will be very bad as I thought I didn't blow in the tube strong enough. But as with me everything is not in a normal way, it turned out that my breathing has improved by 10 % which is quite a lot. I didn't get another spray and everything was OK. At least some good news.

4. Some of you may remember my "friend" Marianne who nearly starved herself to death because her husband had been diagnosed with Alzheimer and she had stayed locked in with him for several weeks until a friend rescued her and brought both to the hospital. There I visited her once, and then she disappeared and Nicole and I didn't know what they had become. As she had behaved so badly we didn't make any effort to find her neither. That was more than a year ago. So we were were very much surprised that she called ! She told us that she was very happy, that she had a nice room in a retirement home and her husband was there too but in the Alzheimer section, that she had a new little dog, her little Kiwi she had given away and a new parrot (the one she had, she had strangled !) I thought she is even more crazy because in some homes pets are allowed but a parrot ? Anyway suddenly she hang off, and we still not know where she is, although she asked us to visit her ! I wonder if she is not in a madhouse !

5. Since I started to paint with my fingers, I love painting again and am very much motivated ! 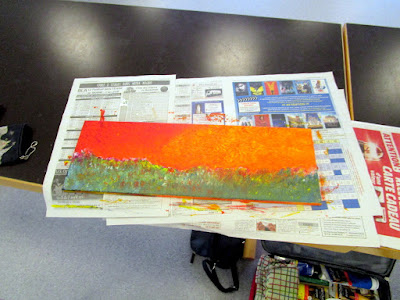 I started this painting today, it's almost finished. Two of my classmates were so adorable to bring me special gloves the same as surgeons use, so that my fingers remain clean. Isn't that sweet. Apparently the others like this finger painting too, because two will start next week !

more participants here at FIVE ON FRIDAY
Posted by Gattina at 07:30 14 comments: 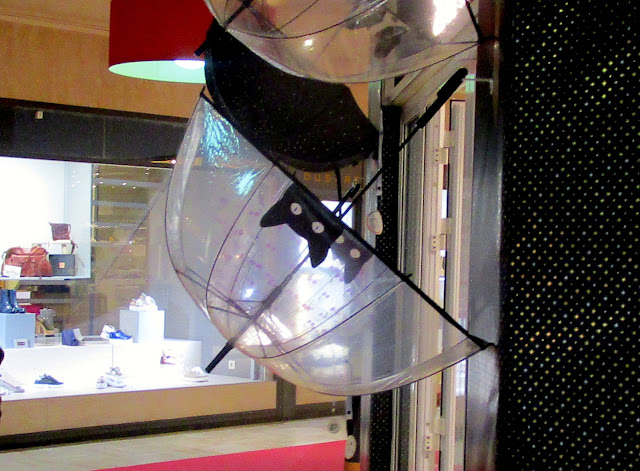 
1. What's the last thing you did that someone else thought was super?
My last painting, because I painted it only with my fingers ! 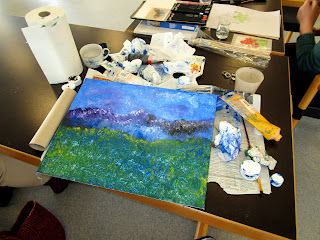 2. The last thing you ate that tasted superb?
Gnocchi with tomato sauce,  basil and mozarella

3. Supersensitive, superstitious, superwoman, superambitious, supercilious, supervisor, superficial...pick a super word from the list and tell us how it relates to your life in some way recently or currently.

None really fits on me or my life.

4. Do you love easily? If you're comfortable doing so, explain why you think that is.
Love easily ?? It all depends what or whom ! No I don't think I love easily, if it comes to humans, with pets its different !

5. Valentine's Day lands on a Tuesday this year. Will you mark the day in some way? If you're celebrating with a dinner out somewhere will it be on Tuesday or will you celebrate over the weekend?
We have never celebrated Valentine's day simply because it didn't exist, and now we think it is too commercial and we won't start now when we are retired. There can be more than one Valentine's day the whole year long !

6. What's something you are loving right now?
I just got up so I don't love anything right now ! Maybe my hot cup of coffee

7. Write a three word (or less) phrase you'd like to see on a Valentine candy heart.
Never thought of it, because I never got one, probably there will be not much choice besides "I love you"

8. Insert your own random thought here.
Why does my tablet not work ? I can't switch it on. I have to go to the shop and return it. Where is the invoice ??

It was a real lazy weekend.  My cable for loading batteries for my mobile and tablet was broken and I had to look for a new one. The shop where I wanted to buy it was packed. On the parking space was writen "complete". No wonder with this cold and humid weather people spend their time inside, espescially in computer, telephone, camera and household appliances stores. I went to a little shop near Nicole and bought it there. As I was so close to her home, I stopped and visited her.

She was happy to have some company, because she couldn't move, she had terrible back aches. Her cousin was there too so we had a lot to talk and spent a nice afternoon.

On Sunday it was the same. Fortunately I could visit and travel with my computer. So I supported a blogfriend who moved from Australia to Hong Kong and  another one whose cat was sick and she asked for advice. I don't know what I would do without computer although I have one only since 10 years.  I also baked a bread, big work, I just had to put flour, water and oil in the machine close it and push the button. Very hard work.

Sometimes it's nice to have a day like this. I found old bloggers, and read old posts which was very interesting.

We ended the weekend with Pizza and a  Midsommer Murder and helped Inspector Barnaby to solve his crimes. 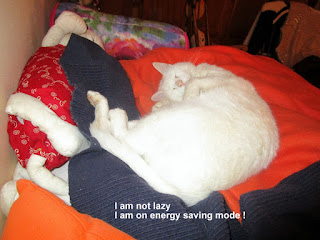 THE GIRL WITH THE WHITE HAIR

When I was about 10, I had a strange girl in my class. She was tall and skinny, had a very pale face and white hairs. Really white, not light blond but white like an old woman. She hardly spoke with us and was always apart.

What draw my attention too was also the fact that the teacher who normally wasn't very friendly was very nice with her, which was quite unusual. Teachers at that time were teaching and that was it, they weren't interested in pupils psychological conditions everybody had his own worries.

Adults were busy with sorting out their lives, it was only 5 years after WWII and Bonn where I lived was to 80 % in ruins. A few of my classmates were still living in the basement of their houses.

This girl intrigued me more and more and finally I tried to become friend with her. But it was very difficult, she seemed to me as if she had built a wall around her and it was difficult to find a hole and get through to her.

The fact that she had white hair made me so curious that finally I asked my mother. My mother told me that the girl was probably an albinos and asked if she was wearing sunglasses or had red eyes, but I had looked and she had not. She had blue eyes. Finally the curiosity won and I dared to ask our teacher.

To my surprise she answered me I thought she would send me away. She told me that this girl lived in Berlin. Her house was bombed while the whole family was inside. Her parents were killed and she was a toddler and buried under the rubble for 3 days until she was discovered. She was so shocked by this experience that her hairs turned white.

I was shocked too, when I heard this and during the night I dreamt that I was buried under a house and screamed to get me out. My mother tried to explain and comfort me, but I could never forget what had happened to this girl who was my age, while I lived happily with my grandparents on the countryside.