1. This time our Scrabble get together was at Ilona's home 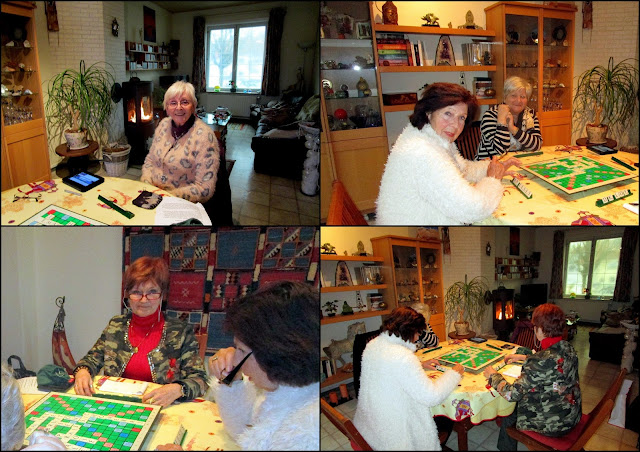 Mireille our half blind friend (above right) started with a Scrabble and got 50 points plus the letters ! She is very good although we have to help her from time to time especially with F and E. I only can admire her. She is such a cheerful girl and so happy that she can go out with us, because she said she had a lot of friends but when her view got worse and worse the friends slowly disappeared ! I don't call that friends ! We had a nice afternoon, Nicole was second I was third and Ilona the last one !

2. I wanted to call Ilona, and suddenly had my friend in Germany on the phone. Instead of pushing on the I I had pushed on G ! That was a nice surprise, we had a long chat and then she invited me for next week for 4 days to Cologne. I thought that was a good idea, it was a very long time I hadn't been to Cologne.

3. My GPS which I had bought because it could be updated for a lifetime,  suddenly didn't update anymore. I got a pop up on my computer that there was not enough room. Mr. G. bought a card and I went to the shop where I had bought it, but they couldn't do anything it just didn't work. I decided to buy a new one before I drive to Germany, and give mine to Mr. G. because he only drives to unknown places very seldom. That's what we did, and I bought a Mio this time, which seems to be very complete and easy to use.

4. We have very strong wind for the moment and I blew nearly away when I walked to my car after some shopping ! Nicole came with Charlie, who is always so happy when he comes to us ! 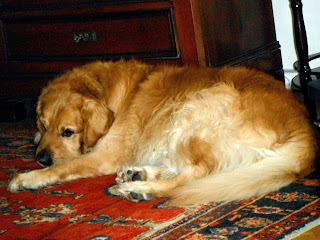 Apparently he starts to bark on the main street to tell Nicole that she has to turn now and continues until she stops in front of our house. As soon as she opens the door he runs to our entrance door and barks again. When I open he doesn't know what to do to show how happy he is and then he runs to the open fire where besides the wood logs I had put some toys for him. My cats don't bother anymore, they just continue to sleep on the beds ! Anyway he can't go there, I blocked the door.

5. After my painting class, where I started a new finger painting, a landscape. I started with a grey 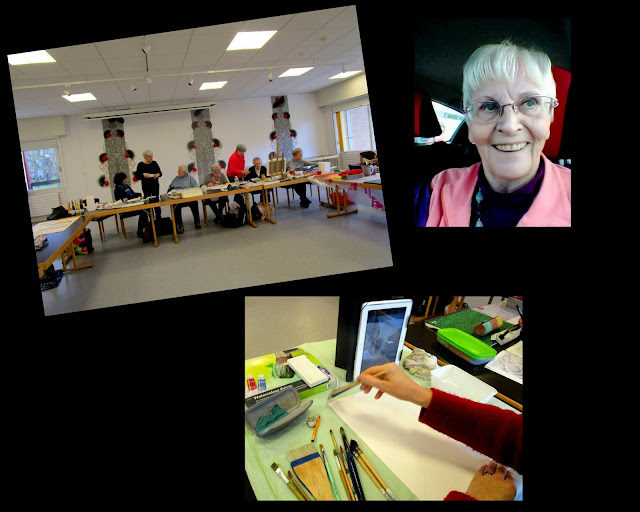 background and a white cat inside, then I didn't like it and made the whole thing blue, after several other color layers, a landscape with the sea and a very cloudy sky came out. As it is not finished yet and it might change again, I didn't take a picture. The reality was I forgot. As you can see we are very modern, instead of copying from a photo, one copied from her smartphone !

After the painting course I went to the hairdresser it was necessary, my hairs had grown and this time she cut it shorter than usual. I thought if I don't like it it will grow again. Mr. G likes it and that's the most important.

more participants here at FIVE ON FRIDAY
Posted by Gattina at 07:30 27 comments: 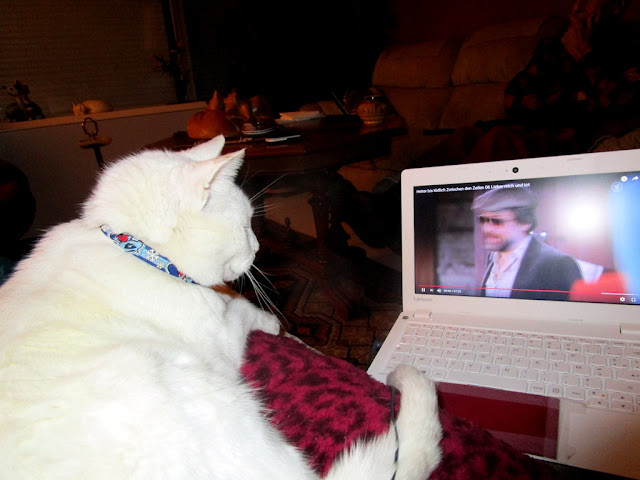 
1. Have you ever been fishing? Did you catch a fish? If so did you keep it or throw it back? If you haven't been fishing is that something you'd like to try?
Just as hunting I hate fishing, I would never try, I don't even like to watch fishermen in their "sport" sitting in a chair, reading newspaper and waiting for a fish and when it's hanging on the hook, they throw it back ! Cruel !

Fish out of water, big fish in a small pond, living in a fishbowl, packed in like sardines, this is a fine kettle of fish, plenty of fish in the sea, or cut bait...which fishy phrase most recently applies to some area of your life?
Maybe a goldfish in a bowl ?

2. What's something you're always fishing for in your purse, wallet, desk, or kitchen junk drawer?
Without any doubt my keys !! in all different places !

3. Your favorite fish tale or movie?
There is nothing coming into my mind. Besides the fact that I like to eat fish (but anonymous fish) I don't think that I ever watched a movie with a fish tale not even with a fish tail. I prefer animals you can pet, like a room tiger !

4. Are you sunrise, daylight, twilight or night? Explain why you chose your answer.
Sunrise and daylight lots of light I love sunny days it puts me in a good mood and I am full of energy then. But I also like the evening twilight and nights but only in summer when it is warm and I can  sit outside late evenings when it's dark.

5. What's the oldest piece of clothing you own and still wear?
I have a hippie blouse from the 70th, and as it is in fashion again, I wear it again and it still fits !

6. We've got one more month of (officially) winter here in the Northern hemisphere. Are you feeling the need for a getaway? What's been the best and worst part of your winter so far?
I am more than ready for a getaway, and I don't even care where ! I hate winter but some days are supportable when it is very cold and the sun is shining. I really hate rainy grey days !

7. The Wednesday Hodgepodge lands on National Margarita Day...will you be celebrating? Frozen or on the rocks? Are you a Jimmy Buffet fan? If so, what's your favorite JB tune?

I am sorry I have never heard of a Margarita Day ! Not to remain ignorant I googled and this is what I found out : The National Margarita Day is observed annually on February 22nd. Known to be the most common tequila-based cocktail served in the United States, the margarita is a cocktail that consists of tequila, triple sec and lime or lemon juice.
Please pay attention not to get a hangover !

8. Insert your own random thought here.
I rake my brain where to go to take some pictures in this rain !

From this side of the pond
Posted by Gattina at 08:47 7 comments:

Mr. G's friend from his Whist card playing had invited us to a Chinese restaurant. 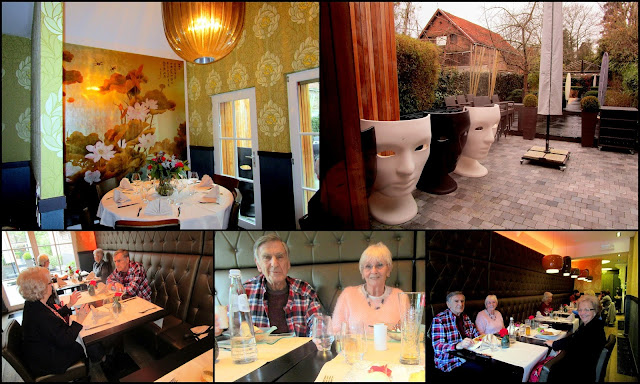 Unfortunately we couldn't use the fancy garden seats, it was far too cold. Inside it was very cosy and we spend a nice time together. 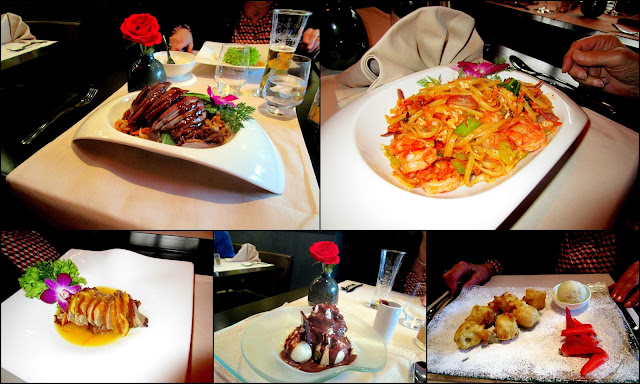 I had Peking duck with noodles, Mr. G. Scampis and our friend duck à l'orange. As desert we both had a Dame Blanche (vanilla and chocolate ice with whipped cream) and Chinese donuts. It was all very good.

In the afternoon we went to Toyota. Mr. G.'s car is now 10 years old and starts to get ouchies. We thought before it is getting worse and also to get more money when they take back the old car it was better to sell it now and buy a new one . I had seen a little Kia which belonged to a friend, but then we decided to buy the little Toyota Aigo. 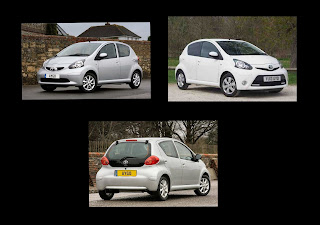 It's just perfect for Mr. G. who only drives very short distances and mostly only in Waterloo. We made an excellent deal, and were both happy about our purchase. Now he has to wait until end March before he gets the new car.

After a few warm days it suddenly became quite cold, too cold for me to go out ! But in the evening Nicole and I went to a theatre play, which was really excellent. 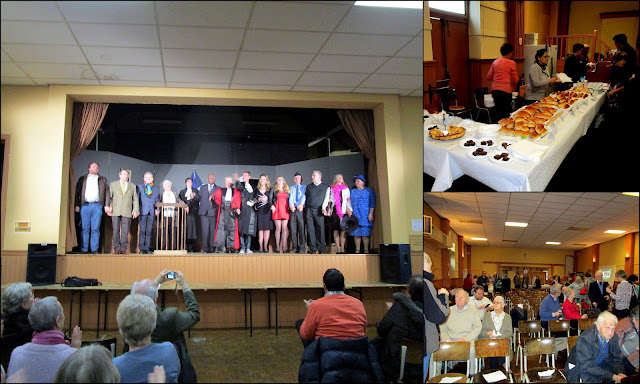 It was performed by hobby actors in a huge room belonging to the city. We got sandwiches, cakes and drinks before it started. The title was : The Trial of Marie Dugan. What I didn't know was that the whole play was as if we would attend a real trial, the actors who were witnesses were sitting amongst us, but we didn't know ! When the judge entered the stage the clerk asked the audience to stand up what we did of course all a little surprised and with laughter. The whole play was made just like a real trial ! I had never attended a trial, so this was my first one and very special  !
Posted by Gattina at 10:05 12 comments: