1. After my aqua gym class we had a long chat about our grandchildren's parents. We all wondered what these kids will become later as it seems that they all have the same manual ! One Grandma complained that it took 45 min to get a two year old in the his seat in the car. They worked at three on him, grandma, grandpa and pregnant daughter, but he made himself stiff like a plank, until they finally managed to get that poor tortured child in the seat which screamed then the whole way back.

2. I felt tired and didn't do very much. The shops were all closed, it was a day off, because of the 11th of November, the anniversary of the 1st world war battle. Most of the people didn't even know why they had a day off, but nevertheless were happy especially because the weather was sunny.

3. On this occasion, near Ilona's in a little Flemish village was a huge market which takes place each year on this day. 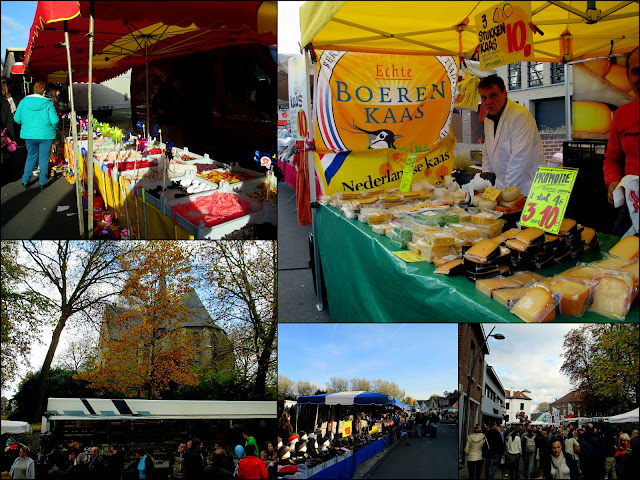 The streets were packed people had a lot of fun and beer flowed freely we walked around and had a coffee. As the prices were as high as in a shop, so we didn't buy anything.

4. Nicole had invited me and another friend for a coffee.

I had caught a cold over the weekend with my son and DIL  who had opened the windows all the time because they felt too warm and I probably had been in a draft. So I was feeling cold, Nicole felt normal and the third one took her pullover off because it was too hot for her. We had a lot of fun.

5. It had been the last day before the cold or flew really started and I felt lousy. 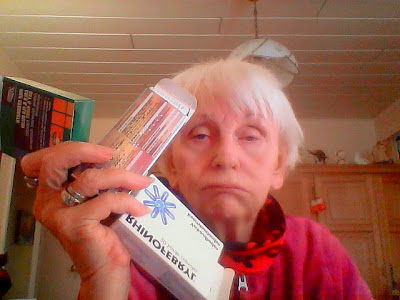 I still feel awful, so I spend my time between bed and TV !

I was very pleased when I finally found a word starting with a Z other then Zen ! A ZIP ! Immediately I wanted to know who had invented the zip. I noticed that it is not that easy at all to find its history !

I started by googling Zip and found :

- a WinZip: Which is a zip utility for file compression, encryption, sharing, and data backup.
WinZip saves time and space, making it easy ... (to close my Jeans ????)

- A Zip manual, not to tell you what to do when your zip is stuck, but transparently read or
write ZIP compressed archives and the files inside them.

The pictures instead, on the Google Zip page showed me zips with which you could really close a bag, skirts, trousers etc. Of course it's easier to show pictures of a traditional zip than of zip files or other zips, and I forgot to mention the Zip code.

I really was surprised. Even the all knowing Mrs. Wikipedia let me down and explained a Zip as a format file. And then I found out why ! I had to ask for Zipper and not for Zip ! Apparently a Zip is British and a Zipper American ! Again languages problems ! How should I know that ?

It all started when In 1851, a certain Elias Howe received a patent for an "Automatic, Continuous Clothing Closure". He did not try seriously to market it, missing recognition he might otherwise have received. Howe's device was more like an elaborate draw-string than a true slide fastener.

The most interesting part of our Zip or Zipper started n the 1930s, when a sales campaign began for children's clothing featuring zippers. The campaign praised zippers for promoting self-reliance in young children by making it possible for them to dress in self-help clothing.

The zipper beat the button in 1937 in the "Battle of the Fly", after French fashion designers raved over zippers in men's trousers. They declared the zipper the "Newest Tailoring Idea for Men" and among the zippered fly's many virtues was that it would exclude "The Possibility of Unintentional and Embarrassing Disarray." Which isn't quite true according to Mr. G, when the zip zipper gets stuck. On the other hand unbutton also takes time and could cause an "embarassing disarry" too. We women don't have this in some cases very urgent problem, except when it comes to trousers and the zip/zipper is on strike.

The most recent innovation in the zipper's design was the introduction of models that could open on both ends, as on jackets. Today the zipper is by far the most widespread fastener, and is found on clothing, luggage, leather goods, and various other objects.

And if you want to know more about a Zip/Zipper just read it here ! 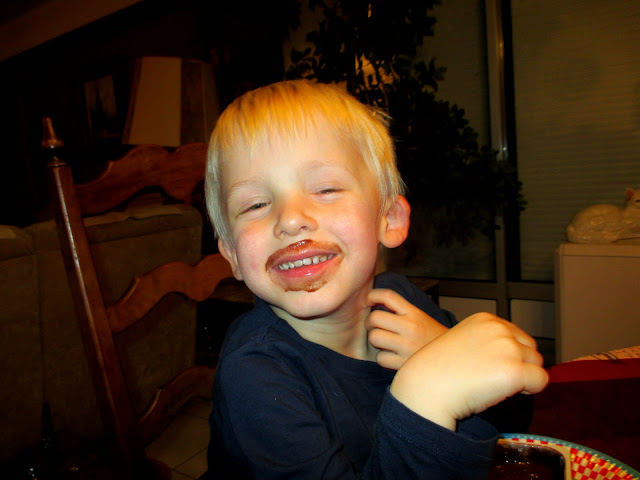 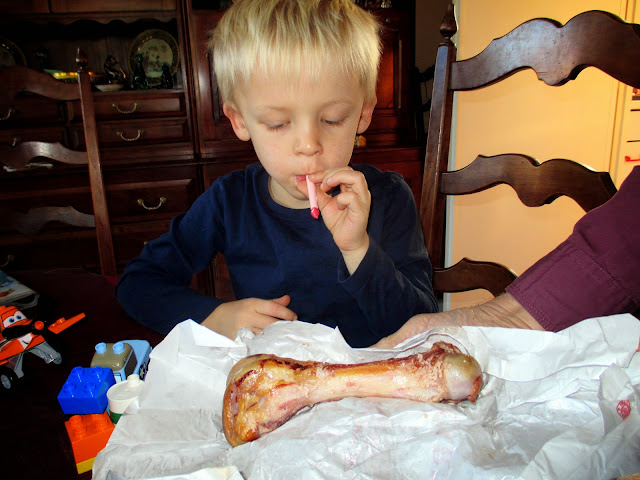 A big bone for dog Charlie

Together with my family we visited the "Autoworld" Exhibition in the Arcade du Cinquantenaire which is a monumental triple arch in the center of the Cinquantenaire park in Brussels. It is topped by a bronze quadriga sculptural group with a woman charioteer, representing Brabant raising the national flag.
Read more here

more participants here
Posted by Gattina at 06:30 No comments:

MY WEEKEND OF NOVEMBER 8

Another busy weekend ! My son and family had arrived to celebrate Toby's 4th birthday with us. It wasn't really his birthday as it is on November 17th only, but this day he will celebrate with his Dutch family. 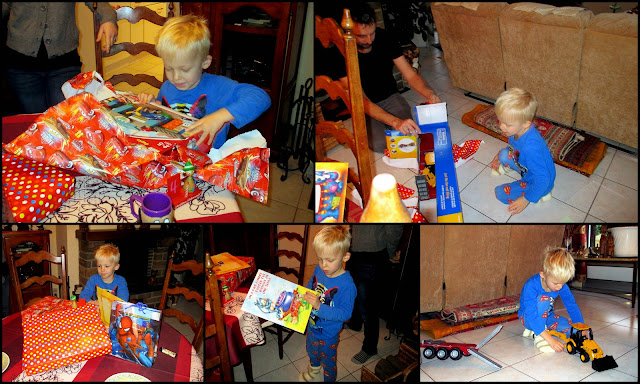 He was quite surprised when he saw all the gifts on the breakfast table ! With unwrapping he was as quick as a weasel ! 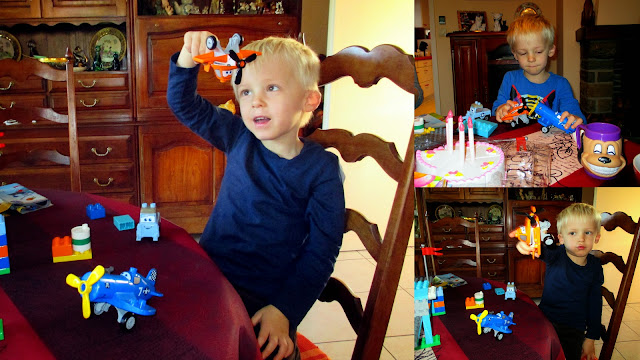 He loved the Lego Duplo planes and also the Birthday cake set with which he can play in his kitchen. Toby loves to cook ! 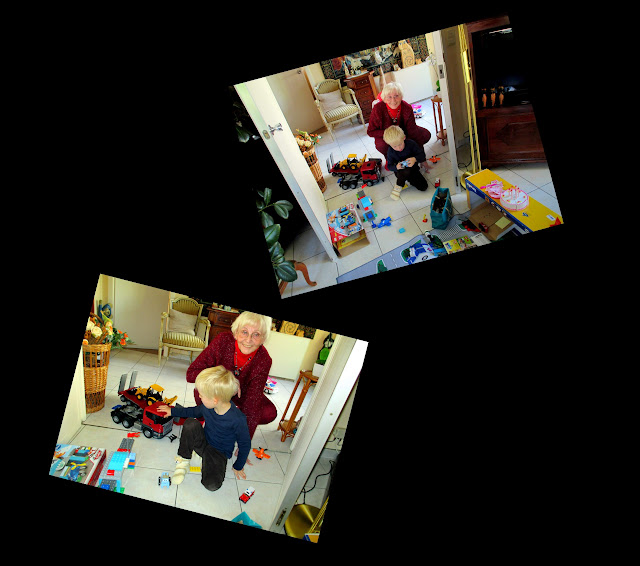 Considering that we live near the Waterloo battle field, our living room looked like a battle field too !

After lunch we went with him and his parents to the Autoworld museum in Brussels. What a fun for a little boy, but for the old once too ! 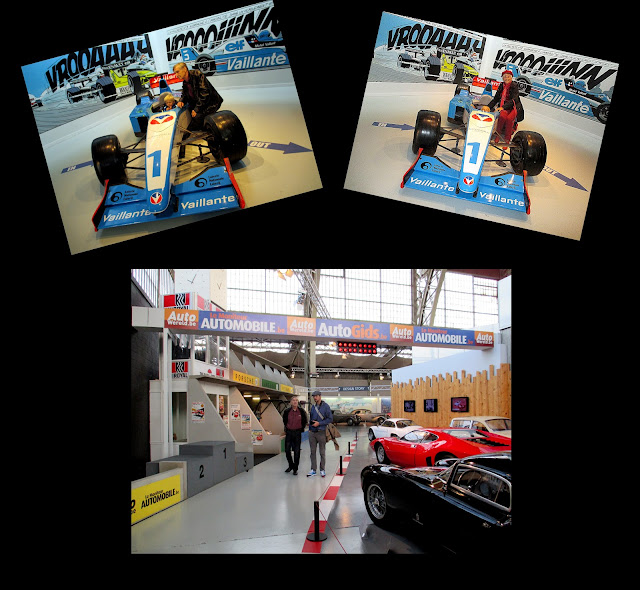 Father and son walking through the exhibition. The sun was shining and afterwards we went for a little walk through the park surrounding the Cinquantenaire Arch 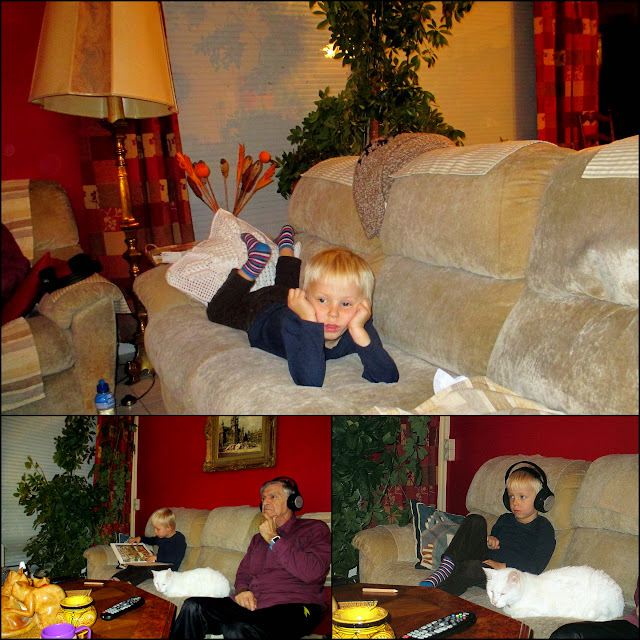 Mr. G. visit or not didn't want to miss his Formular 1 ! The only sport he is watching on TV. Arthur watched too, and Toby tried out the headset.

After a pasta with chicken supper, (which child doesn't love pasta) where the big and the little men ate like horses, the day was over and he went to bed. We didn't stay up long either, we both were tired, at our vintage age we don't have the strength anymore as we had even 10 years ago ! The parents had been invited at friends.

On Sunday a big birthday party in a place called "Kid's factory" had been organized by my son. 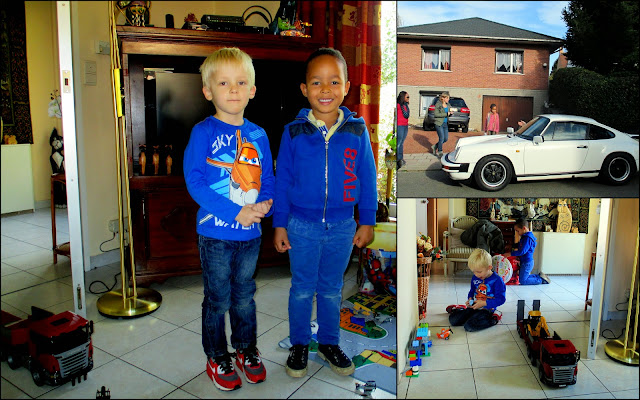 One of his best friends arrived with his family to show us his new Porsche ! He was so proud of his new toy ! His son is half a year older than Toby, and it seems that they are big friends too. 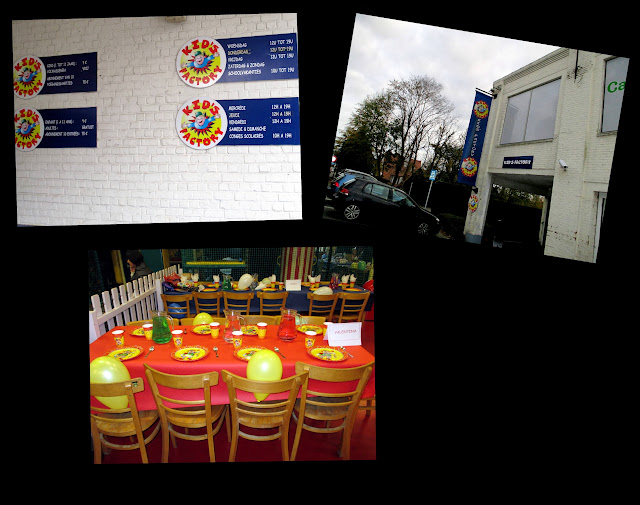 We all drove to the place where a nice birthday table had been put up. 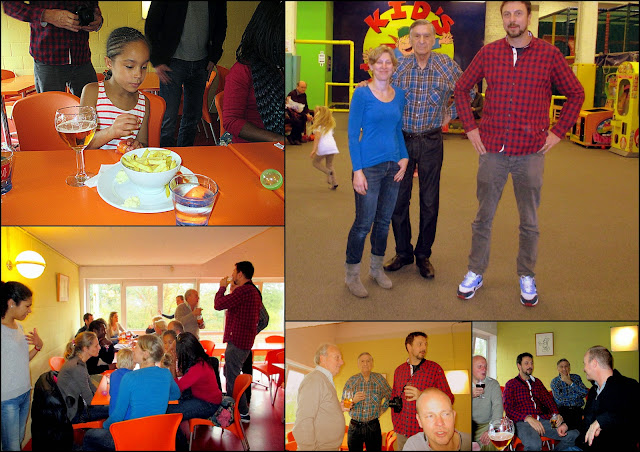 Before the kids started their celebration, we met with my son's friends and their families and had a lot of fun ! I sat together with their wives and we had a lot to chat ! 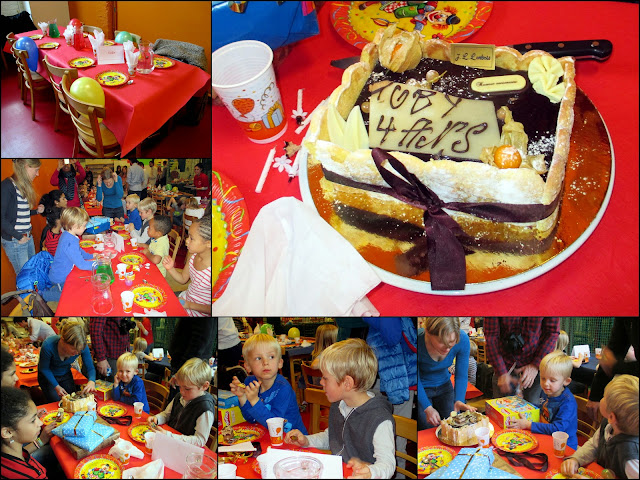 Then we went to the birthday table and the big cake arrived ! Toby's mum cut the cake and it disappeared in no time ! 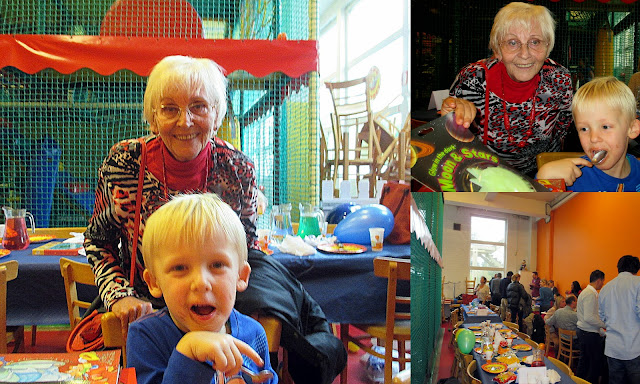 Toby got a lot of gifts, now he can open a shop ! We all had a real nice time and at 4 pm we all left. We went home and they packed their stuff to drive back to Amsterdam. Toby wanted to stay with us, but then followed his parents to the car and off they went.

Mr. G. fell on the sofa to watch the Formular 1 again and recovered from the noise of certainly around 100 kids who had climbed and played all together on the different games ! There were other birthday parties going on too ! Fortunately the noise hadn't bothered me at all, and I chilled out behind my computer ! The cats were happy that our visitors were gone, except Arthur who missed Toby to play with ! He even went with him to the car !