It's a bit difficult for me to write what I have done from Monday to Friday, as it seems to me that every day is the same. Since Rick passed away I have lost all inspiration but I noticed once I start writing it slowly comes back.

On Monday I went to Picard (Picard Surgelés is a French food company specializing in the manufacture and retail distribution of frozen products. It began as Les Glacières de Fontainebleau in 1906. Picard Surgelés has almost 900 retail stores in France. In 2014, French consumers voted Picard as their favorite brand. Wikipedia) It also has shops in Belgium and one in Waterloo. Since I live alone I don't cook anymore I go there and buy for 3 weeks my daily plates, which are really delicious and from all countries. This suits me very well, as I seldom go to the restaurant now. It's just as if an invisible chain attaches me to my apartment. I don't like to go out anymore not even for shopping.

As Nicole is so alone and sick, I asked her to take a cap an come over, because I had my breathing problems just that day. Finally her daughter dropped her off and Adeline (neighbor) also came, and we spent a nice afternoon together. Adeline has the capacity to cheer up even a dead person ! 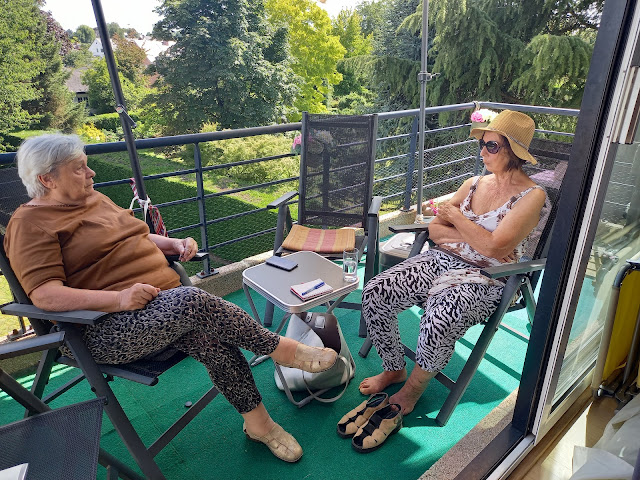 and here they are, I think Nicole still looks very good considering that she is over 80 and has a brain cancer. The doctor told her that she is a miracle !

Besides the administration work, still for Rick's death, which really gets on my nerves, because it looks like if I am too quick. All things they ask me I have already done probably because I do all per computer and they think I am an old grandma and like paper and the snail mail ! I have until September to get all settled, but except one thing I have already done everything, and am officially a widow, which I still can't believe.

The first mussels arrived in the restaurants and Adeline and I decided to try them, and they were really delicious. 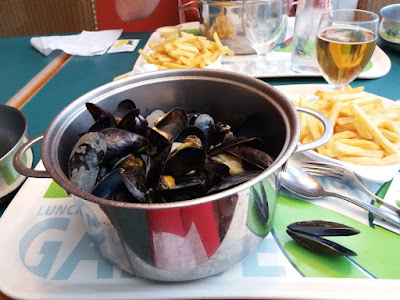 I still get emails from friends living far away, even the wife of Rick's boss when he worked in the Hilton hotel just after his arrival in Brussels, wrote me a very kind mail. We became friends when he worked there in 1968. Her husband is also Italian and she Irish. Now they live in Thailand when it's winter and in Ireland or Croatia in summer. He had switched from the Hilton to the Sheraton and had worked a little in the whole world. Now of course he is long retired.

Another old friend visited me this week she once was my neighbor when we still lived in our house. Poor girl has also Parkinson, but not so like Rick, she can control the shaking (which he never had) with medication. She even made travel plans, but honestly I am not yet ready.

I also had to take little Rosie to the groomer, because her claws had become so long. She sang the whole way, was an angel while her claws were cut, and then I chatted a bit with the girl, she knows me for a long time because I used to go there with Kim my long haired cat.

The weather is hot and fortunately I can always sit outside because it is a little windy, the last days we had over 30°C which is quite unusual for Belgian summers.

A lot of people are on holidays despite the long waiting in the airport.

I am busy to make a collage, that's the second one, but I am not yet satisfied. At least I love to do it, it brings back so many memories I couldn't have found a better partner, he was the only man who understood my complicated soul and loved it. 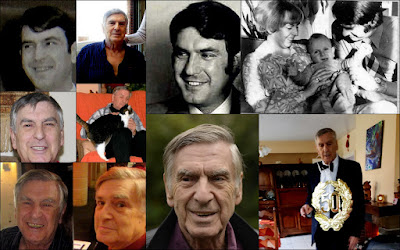 more participants at Susanne at Living to tell the Story.
Posted by Gattina at 17:46 11 comments:

1. Do you like the beach? How far do you have to drive to get to the nearest beach? Your least favorite thing about the beach? Last beach trip you took?

Yes I like the beach, the nearest we have is only 100 km from Brussels to the coast. I like to lay on a beach bed and watch the waves and the people in the water. The last beach trip I took was 2 weeks ago in Tunisia more precisely the Island Djerba. The beach there was not so nice because it was sometimes full of algae depending on the strong wind. Not always but sometimes. I stayed on a terrace on my beach bed and watched the people fighting with the algae. 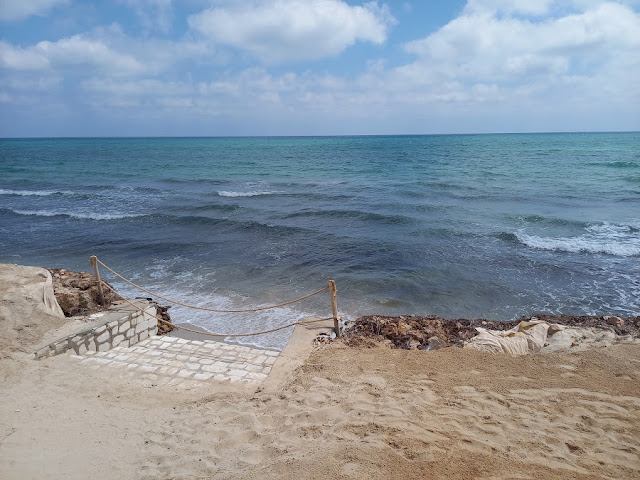 2. Are you known for making waves or are you more of a 'go along to get along' kind of person? Explain.

I am an old Grandma when it comes to water, waves and swimming. I don't like water in my face and swim like a giraffe with my head out of the water making my neck as long as possible. I avoid waves of course and kids who play and splash water around. I prefer sitting or laying and watching and babble. 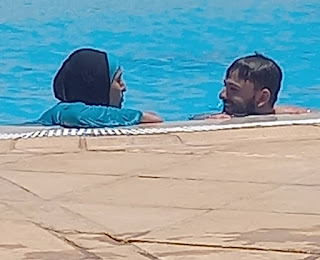 3. A favorite song that in some way references the beach? A favorite book and/or movie with a beach-y setting?

Can't remember any song, book or movie concerning a beach. Maybe a movie but I forgot the title when, a very much in love couple laying on the beach, suddenly touched the cold corpse of a murdered person ?

4.Tuesday is National Simplicity Day...what's a simple pleasure you've enjoyed this week? What's something you could eliminate from your life to make things simpler? 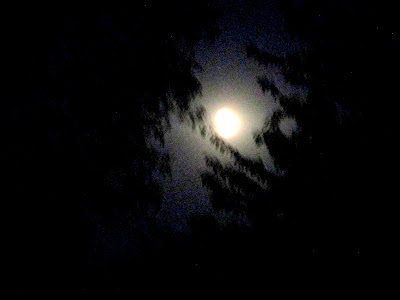 Sitting on my terrace at 3 am and watching a little fox wandering around. At the same time there was a wonderful round moon in the sky.

I think I eliminated already all things from my life to make it simpler.

5. What's something you love to do? Do you do it often? Why or why not?

I think since the death of Rick I changed. I, who liked to discover new things every day, to travel as much as possible, now I prefer to stay home alone, and I don't feel lonely, I just think that this way nobody can hurt me as some so said friends have done in the worst time of my life.

That's the second post I tried to write, at least it is a start. 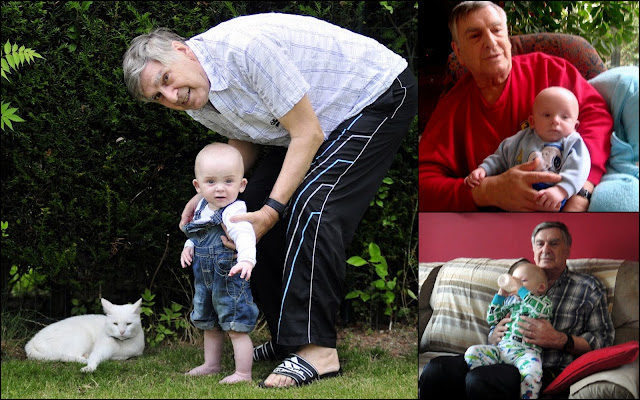 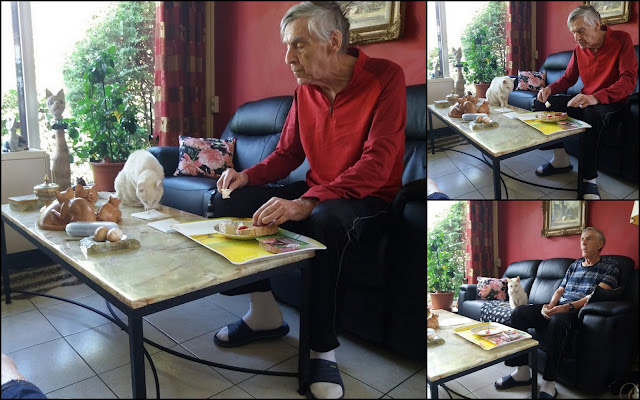 What melted Rick's heart like butter in the sunshine, was his love for cats and kids. And I saw it  at his funerals all little friends of our son were there meanwhile middle aged adults, but they had never forgotten the way he played with them when they were small kids.

It's already 7 weeks now that Rick passed away. After 13 days in a Wellness  Hotel in Djerba, I am back since the first of July. Although I lived alone in this apartment for about a year, I never felt alone, because he was still there and I could visit him. Now he is really gone and I still don't realize completely.

I stay mostly at home and go only out for shopping. Sometimes I go with my two neighbors for a lunch. I only feel good here in my home and don't feel lonely either. I do the administration work which they ask and which are already done. This makes me crazy because I have to call and tell them to look in their files. Everything is in order and still I get papers. Then I call and they tell me to throw them away ! There excuse is that each case is different !

I also sort out my photos and put my blog posts together as I want my blog printed. So the days go by and I wait that my energy comes back.

The Covid starts again and in some places we have to wear masks again. It doesn't bother me, because I seldom go out. I don't know when I am ready to write again, I miss it really, but I have like a blockage. The fuel for my motor is gone with him. I am, as the whole world, in an energy crisis, only mine is private. 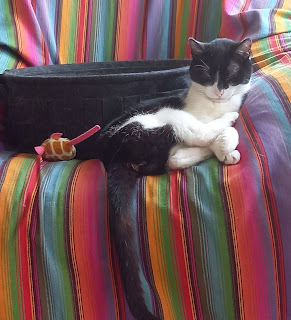 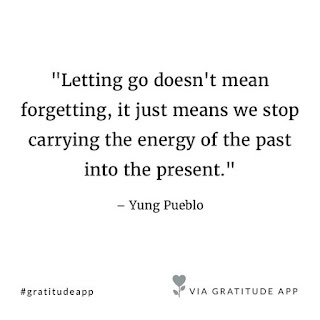